Nitecore P12 & MH12GT - How have Nitecore's classics held up? 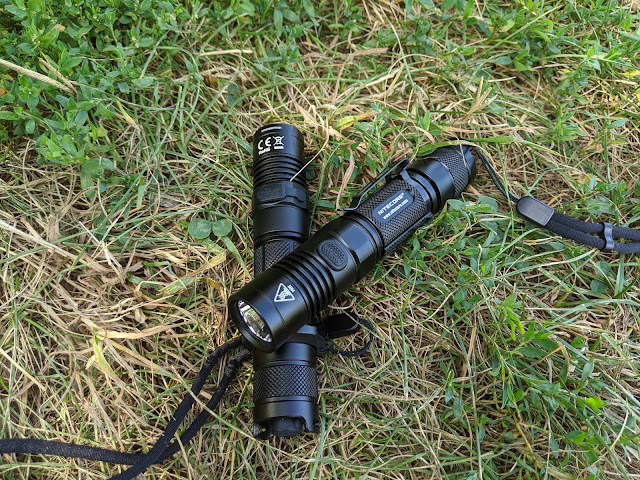 Nitecore did something a bit different and sent me two lights to review that aren't brand new - the P12 and MH12GT. These are both tube lights in the popular dual switch form factor, and Nitecore considers these to be 'classics' that have played a major part in defining their current product lineups. So, I'm going to take a look at how these lights have held up, and whether they're still worthwhile a few years later.
These two lights have different LEDs, but are otherwise quite similar - the biggest difference is that the MH12GT adds integrated charging. There's a whole bunch of variations on these two lights - The 'Precise' series now includes the P12GT and P12GTS, with different LEDs, as well as a number of other variants with slightly different head sizes or control schemes. Likewise, the 'Multitask Hybrid' series also includes the MH12, MH12GTS, and many more.
I've actually already reviewed a number of these other lights in these two series: the P12GTS, MH25GTS, MH40GTR, and the P18.

A lot of the excitement in the flashlight world circles around the newest innovations, so it was great to get a chance to try out some lights from a few years back and see how they compete - which turns out to be quite well! Nitecore's newest lights like the P12GTS have much higher output, and have a few refinements to the UI - but these lights here are still fantastic. They're slightly smaller, and the MH12GT even has more throw. In fact, the MH12GT seems to be a direct competitor to Fenix' UC35 V2.0, with the same LED, switch configuration, and built in charging.
The original P12 uses an LED that I wouldn't choose these days - in fact, I wish both had a neutral white option available - but overall I'm very impressed with how well these lights have lasted. This is an incredibly popular form factor, and for good reason.

Both lights are widest at the anti-roll section behind the head with a thickness of 25.9 mm, thinning to 25.3 mm for the rest of the body. The P12 measures in at 140.5 mm, and the MH12GT manages to shave a few fractions down to 139.3 mm despite the added charging. 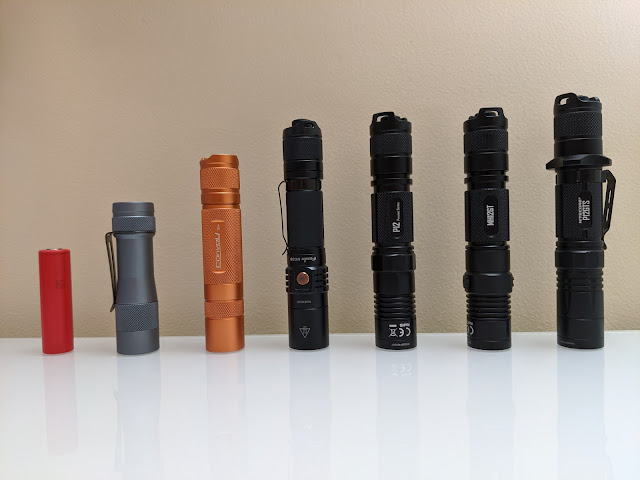 Here's a lineup shot for size comparison. From left to right, this shows an unprotected flat-top 18650, an FW3A (a tail e-switch light built to be as small as possible), a Convoy S2+ (with a reverse clicky), and the Fenix UC35 V2.0, Nitecore P12, Nitecore MH25GT, and Nitecore P12GTS - those last 4 are all similar dual-switch lights with reflectors, and all but the P12 have integrated charging.

These lights are similar enough that I'm covering this section as one, but I'll be sure to note any differences. In all the images, the P12 will be on the left and the MH12GT on the right. 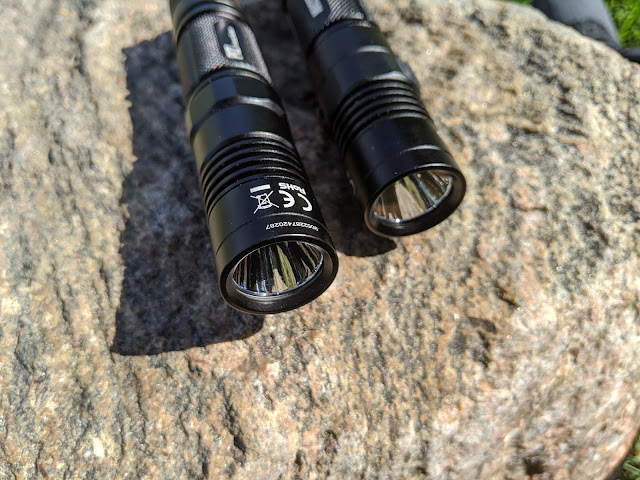 Starting from the business end, both lights have smooth bezels, and a healthy number of fins behind them for cooling. 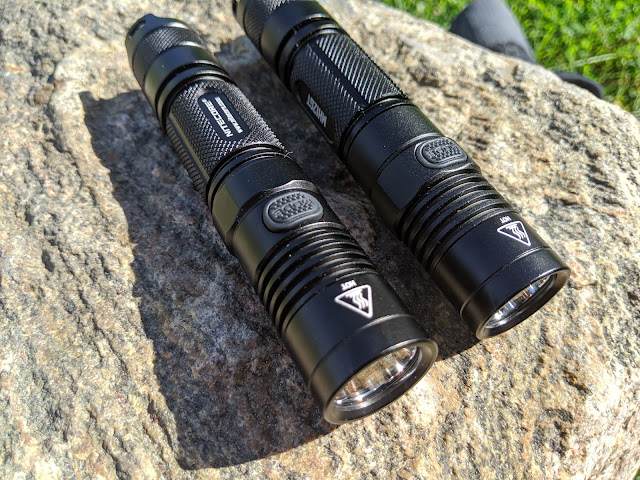 On one side are the mode switches. Note the anti-roll section sits closer to the head on the MH12GT. 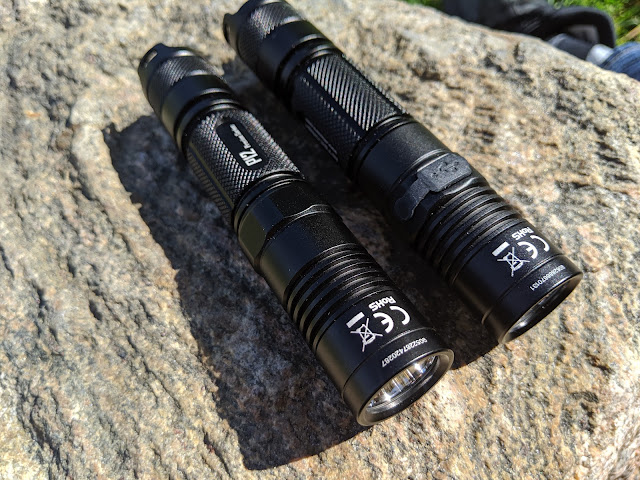 The opposite side of the P12 is bare, while the MH12GT has the micro-USB charging port here. That's probably the reason for moving the anti-roll section - a flat side is easier to put a port into. 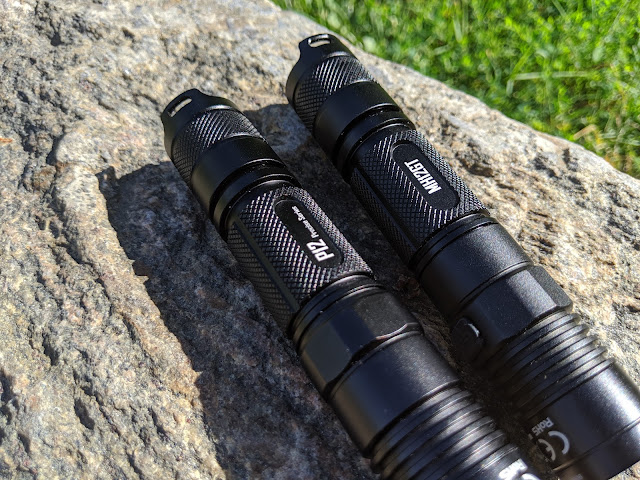 Both bodies have the same knurling design that's carried on to Nitecore's current lineup. 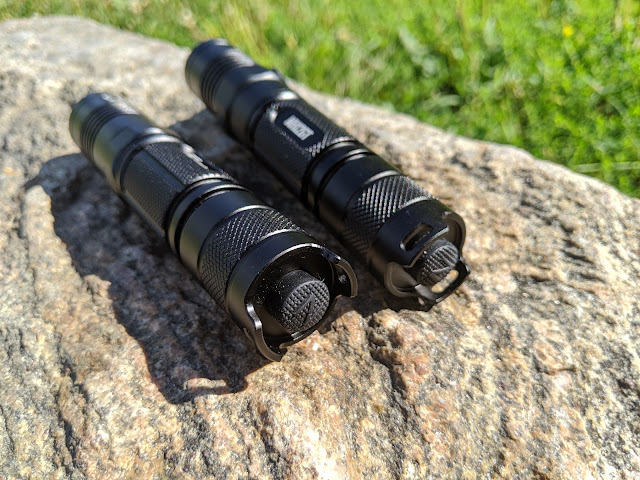 The tailcaps are identical as well, with two 'ears' to help prevent accidental activation. These lights will not tail-stand, or at least won't be very stable. 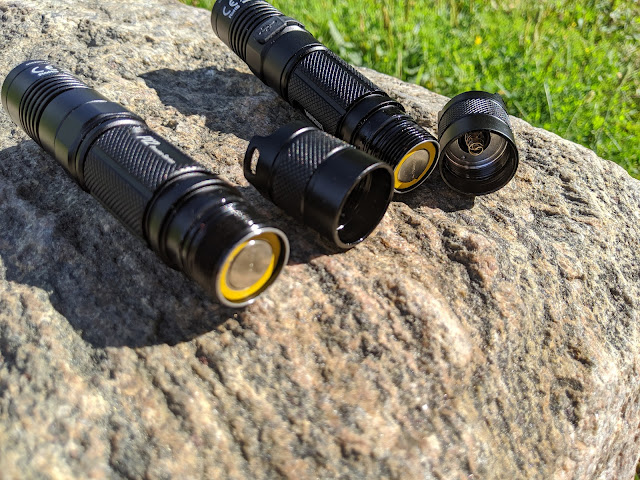 The tail threads are anodized, and there's a spring for the negative cell contact. 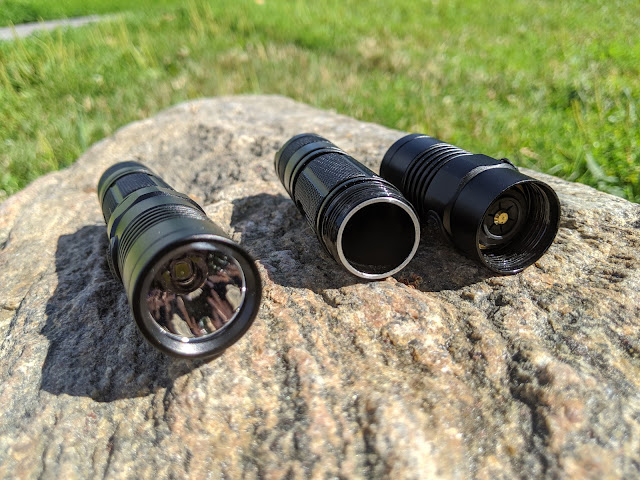 The head of the P12 seems to be glued on, and isn't readily removable, but the MH12GT screws right off, showing another set of anodized threads that could be used to lock out the light. The design of the positive contact is intended for use with button top cells only. The P12 shares the same design. 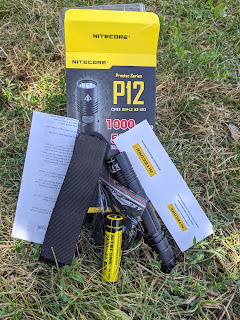 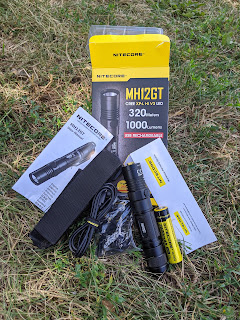 The two lights have the same basic accessories included:

Both of the samples I received included a 2600 mAh Nitecore cell, but the product pages seem to indicate that's not standard - the P12 should come without a cell (although I've seen it packaged with one from many sellers), and the MH12GT should include a 3400 mAh one. The latter light also has a handful of additional accessories in the box:

The standard 1" tube light form factor that both of these lights use is a popular one for a good reason. It's comfortable and pocketable - not much to complain about in terms of ergonomics. 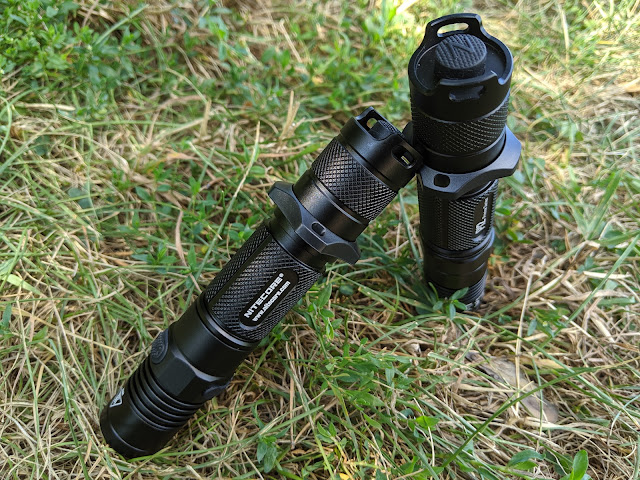 If you'd like more grip, the plastic grip ring can be installed between the light and the tailcap. You can spin it with a bit of effort when it's in place, but for the most part it will stay put. I don't usually like to use these on lights where they're wider than the head, but it does add a lot of grip and roll resistance. 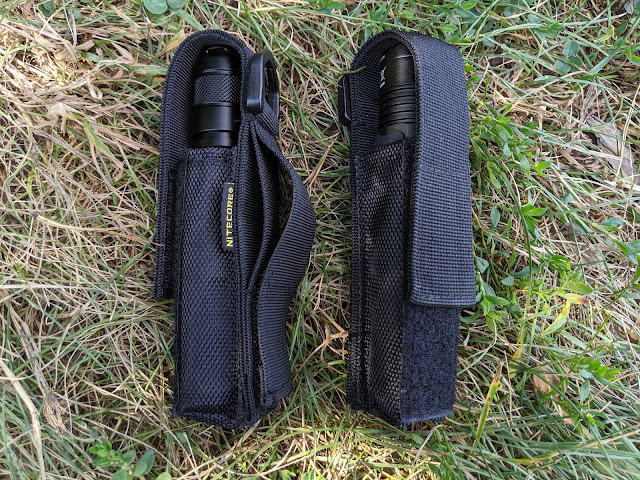 For carrying, the included holster has hook and loop closure all down the front, which I really like - it means the holster could be used with shorter lights as well, and would still be tight. On the back there's a plastic D-ring, a pemanent sewn belt loop, and a second attachment point fixed with hook and loop closure. 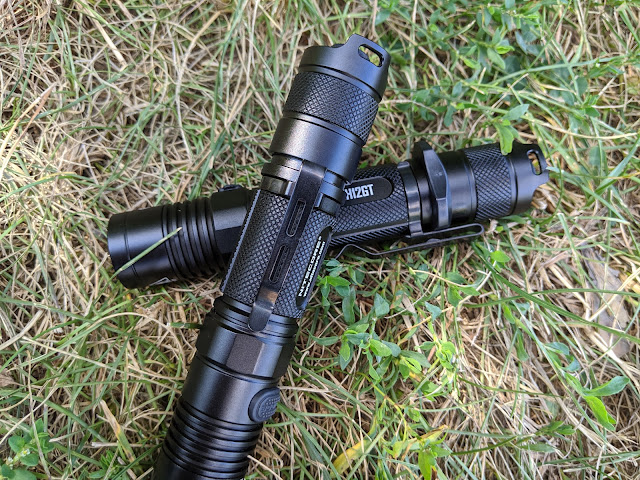 The included pocket clip is friction fit, and only really fits at the tail for head-down carry. It's not especially deep, but the profile is great. It will fit with or without the grip ring installed. 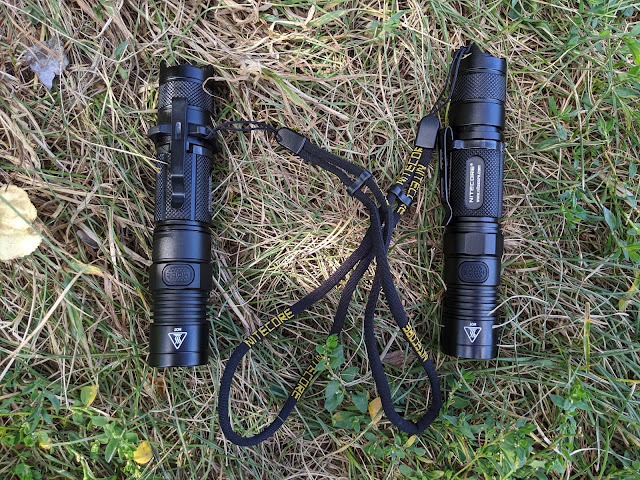 Lastly, Nitecore includes a lanyard that can attach either to the 'ears' at the tail of the light, or to the hole in the grip ring.

Both lights have 4 modes, and the same UI:


That's all. The levels are claimed to be slightly different for the P12 (1, 70, 240, 1000 lumens) and the MH12GT (1, 55, 280, 1000).
In both cases, the mode spacing is good, and the UI is exactly what you'd expect for this sort of light. I've been spoiled by the shortcut to low that Nitecore added in the newer P12GTS, but otherwise this is a fantastic interface. The ability to use these lights for quick momentary peeks is especially great. 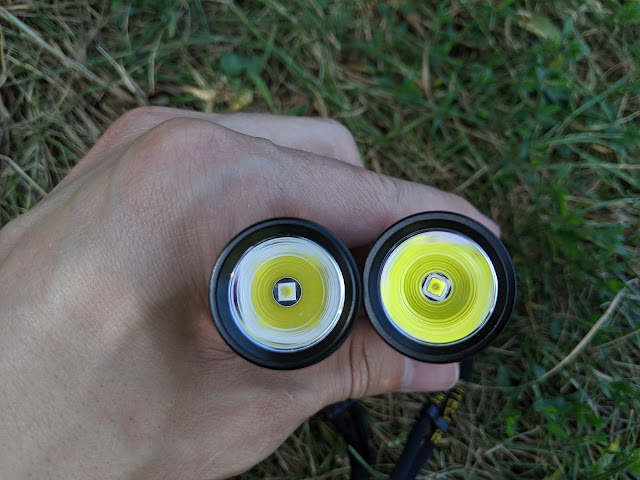 Both these lights have a smooth reflector, but the different LEDs produce different beams. The XP-L Hi in the MH12GT (left) is optimized for throw, whereas the XM-L2 in the P12 (right) results in a wider beam profile. 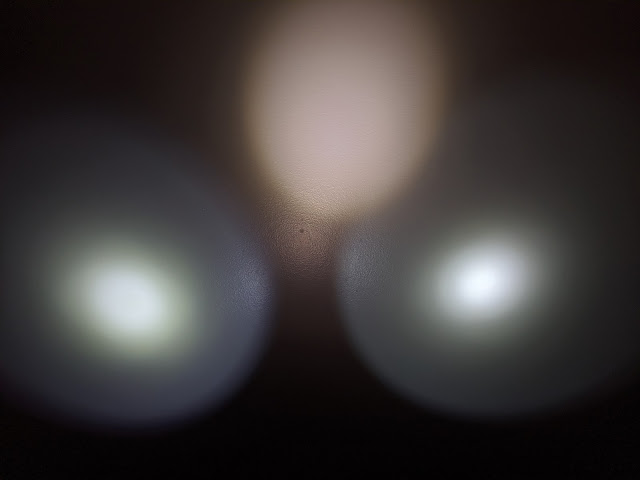 Here's an image with the P12 beam on the left, the MH12GT on the right, and a 4500K Nichia E21A at the top. You can see that the XP-L Hi on the right is more concentrated and smoother than the XM-L2.
It's worth noting that the MH12GT, with the throwy XP-L Hi, claims to be the furthest throwing 1" light on the market. It's extremely common to see people looking for a "pocket thrower", so this is definitely worth consideration.

Both lights were tested with the 2600 mAh Nitecore cells that came with them.

I measured a bit more output from the P12, and that's to be expected - even though it doesn't match the specs, the LED that light uses is more efficient than the one in the MH12GT, which is optimized for throw. This can also be seen in the more drastic thermal throttling on the MH12GT. On medium, both lights stayed at the same level with perfectly flat regulation, through the P12 far outlasted the MH12GT.
Both lights exceeded the stated runtimes on high, but on medium the P12 matched it and the MH12GT fell a bit short - probably due to the lower capacity cells. The product page states Nitecore tested with a 3400 mAh cell.

The MH12GT built in charging was tested, but this is one of the big differences between these two lights - the P12 does not have integrated charging. To charge the MH12GT, just plug in a USB cable and turn it on. The indicating LED blinks while charging, and goes solid when complete. The light won't charge if the tail switch is left off, and can't be used while it's charging.

The 0.5A charge rate is a bit slow, but it manages to charge this 2600 mAh cell in about 6.5 hours, with a textbook CC-CV curve. There's some residual drain after the charging is complete, probably just to keep the LED on without draining the freshly charged cell.

This product was provided free of charge from Nitecore. I was not paid to write this review, and have tried to be as unbiased as possible.
Nitecore's product pages for the P12 and MH12GT
P12 listing on Amazon (affiliate link)
MH12GT listing on Amazon (affiliate link)
1x18650 2xCR123A Cree XM-L2 Cree XP-L Hi Flashlight Integrated charging Micro USB Nitecore