Nitecore sent me their MH40GTR to review. This is a dual cell thrower from them, and is in fact their furthest throwing single emitter light at the time of writing. The light uses an XP-L Hi in a large reflector, and has integrated charging using a barrel plug. 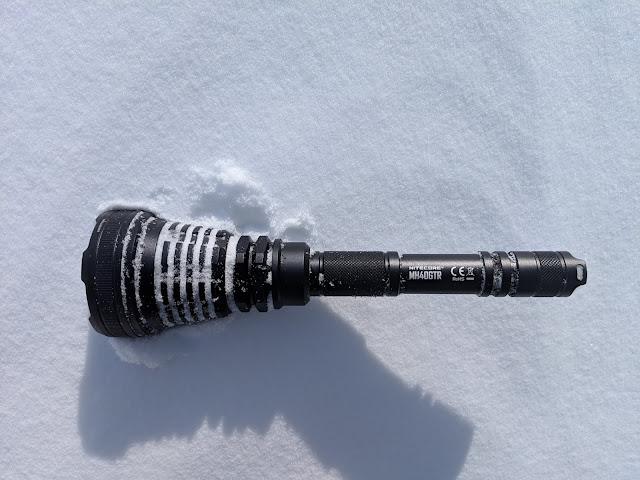 This is a follow up to replace the older MH40, a very similar light that had a few different design elements and a far more dated emitter. The newer version I'm reviewing here has almost double the throw of the older model, so be sure not to mix the two up when you're shopping!

This light is very clearly a dedicated thrower, and it's well suited to that role. The UI is a bit different than what I am used to, but once set up it's simple to use and great for a purpose-built light like this.
I really like that it can be locked in turbo mode and that the switch allows for momentary use - two things I find myself using often when I just need to see something really far away.

The light measures 256 mm long, 69.9 mm wide at the head, and goes down to 22.2 mm at the narrowest point of the cell tube. It's worth noting that this is a large light - by far my longest and widest.

In fact, the light is large enough that my usual comparison to my Convoy lights wouldn't add much perspective, so here it is next to a few of my dual cell lights. Overall, it manages to be quite compact considering the tail switch, built in charging, and large head for throw.

As usual from Nitecore, the build of this light is great. It feels solid in the hand, and the anodizing is smooth and without any visible defects. 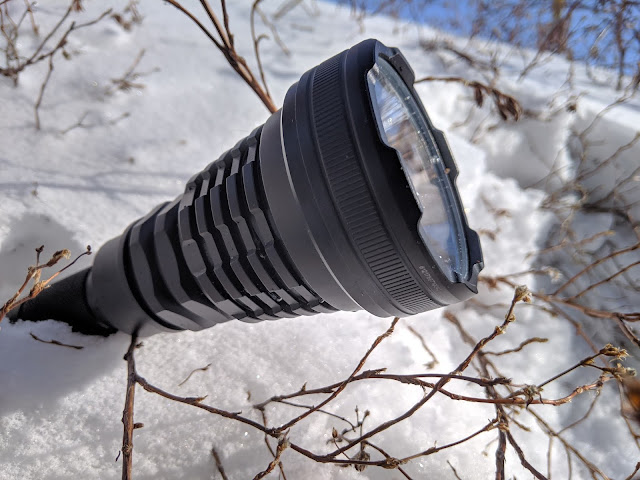 The head of the light has some crenelations, which can be a handy reminder if you happen to place the light head-down while it's on. There's also some reeding around the widest portion of the head, then it starts to taper. 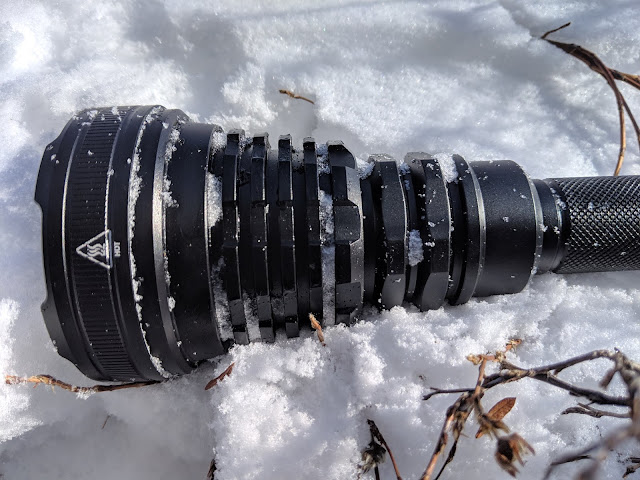 Lower on the head, there's quite a few deep, thick fins to help with cooling. The final two fins aren't on the head itself, but are on the sleeve that screws into position to seal the charge port from water or debris. It's a solid design, but the sleeve seems a bit overbuilt. 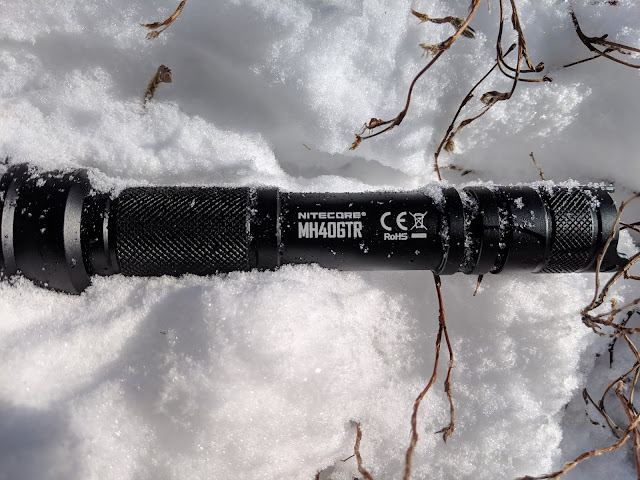 The cell tube of the light is knurled for half the length, and smooth for the remainder. It also contains labeling of the product and brand names, and the regulatory markings. 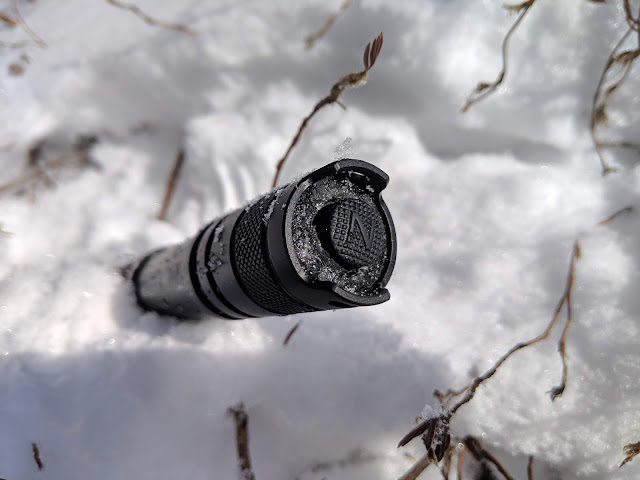 The tailcap of the light is knurled, making it easy to remove. There are two ears with lanyard attachment points, and a centered button with the Nitecore "N" molded into it. The light will tail-stand, but the large head means it isn't very stable. 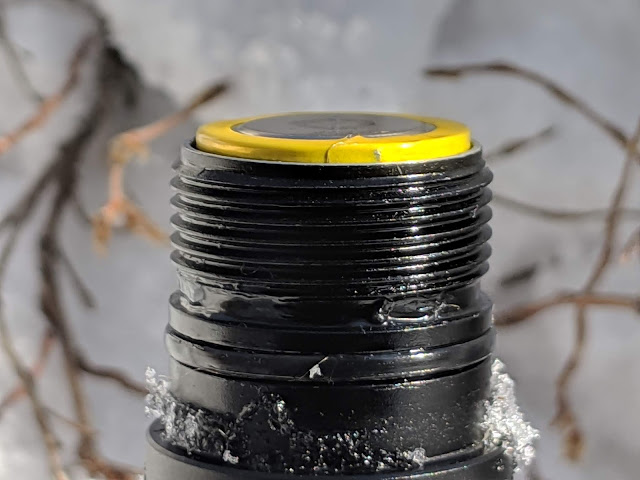 Inside the tailcap, the threads are clean cut and anodized. This means physical lockout is possible by slightly unscrewing the tail. 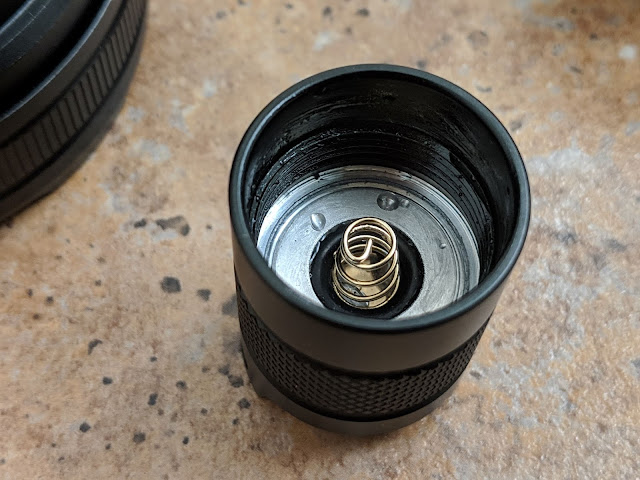 The tail uses a single spring as the negative contact for the light. 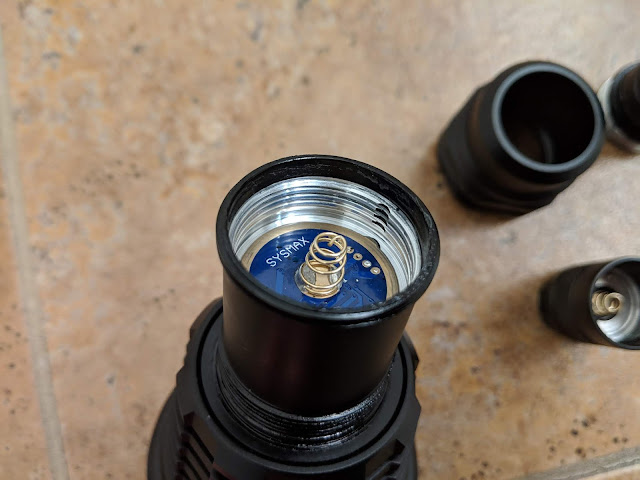 At the head of the body tube, a spring serves as the positive contact as well. This means that flat top cells should work, as long as the positive end of the cell protrudes enough over the wrap that the two cells make contacts with each other. 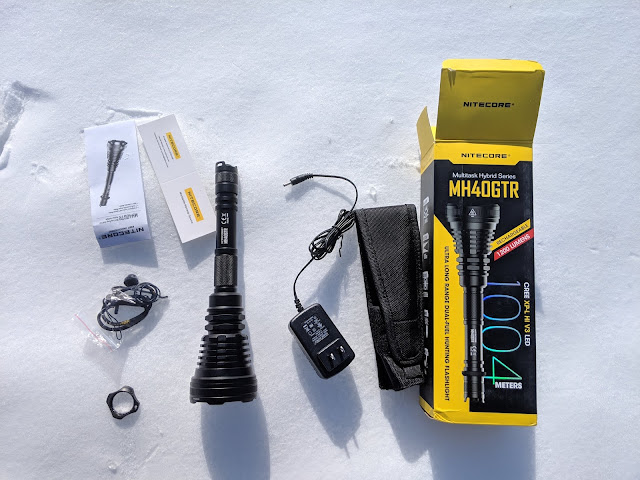 This is a full kit light, which is great! In the box, you get:

This light looks like the head would make it uncomfortably imbalanced when using the tail switch, but I didn't find that to be the case - grabbing with a solid underhand grip makes it perfectly usable. 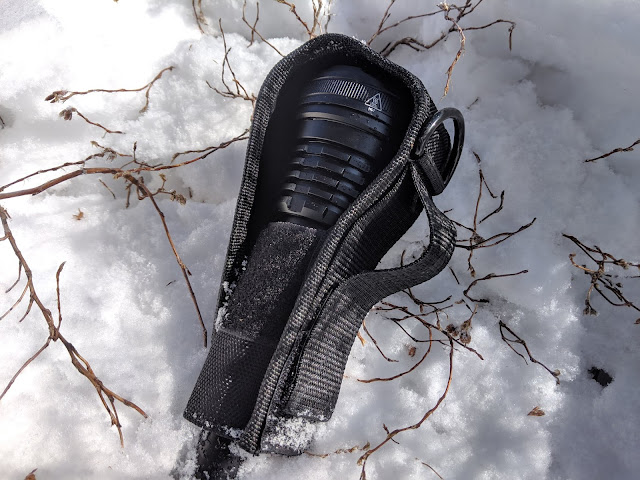 The main method of carrying this light around is the included holster. It's a nylon holser with a velcro closure. On the back, there's a fixed loop, a velcro loop, and a large D-ring to attach it.
The light also includes a plastic grip ring that can be attached near the tail. There's a lanyard that can attach either to the tail itself or the grip ring, and a friction fit belt clip that attaches for head-down carry.

This light has two ways of changing modes. The first is by adjusting the head. When fully tightened, it is locked on to turbo mode at a claimed 1200 lumens. Loosening the head slightly switches to a user defined mode. In either mode, the forward clicky switch on the tail can be clicked to turn the light on or off, or half pressed to momentarily activate the light
When the head is loosened slightly, short taps from off will cycle through the available modes - turbo, high (380 lumens), medium (100 lumens), low (15 lumens), strobe and SOS.
One thing to note is that between the head, charging collar, and the tailcap, there's a lot of parts that twist on this light. It takes a few tries to make sure you're unscrewing the right thing at the right time. For switching mode groups, I found it best to grip the light by the knurled portion of the body tube and the reeding on the head. I also found that the user-defined mode group made it easy to accidentally switch modes when using it for momentary use, but that's likely just because I'm more accustomed to reverse clicky switches.

This light uses a cool white XP-L Hi in a very large reflector. This is one of my favorite emitters, and a great choice for a thrower. This emitter has almost no tint shift across the beam, and has a tiny surface area that gives it the huge throw. 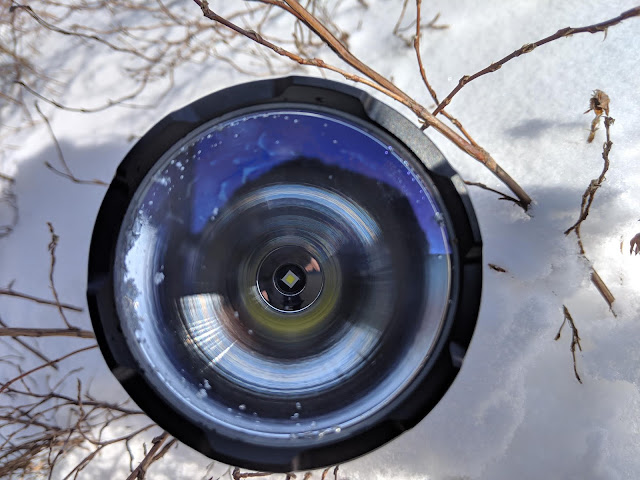 Nitecore claims 1004 m of throw from this light, and that sounds completely reasonable based on my testing and real world use. The beam is ringy if you shine it a short distance, but that's really not what this light is meant for at all.

The light runs off of two 18650 cells, and two come included with it. Since the cells are in series, it's recommended to use protected and married cells like those included. Nitecore also claims support for 4xCR123A cells, but that configuration wasn't tested. Obviously, if you choose to use those cells, they won't be compatible with the built in charging. 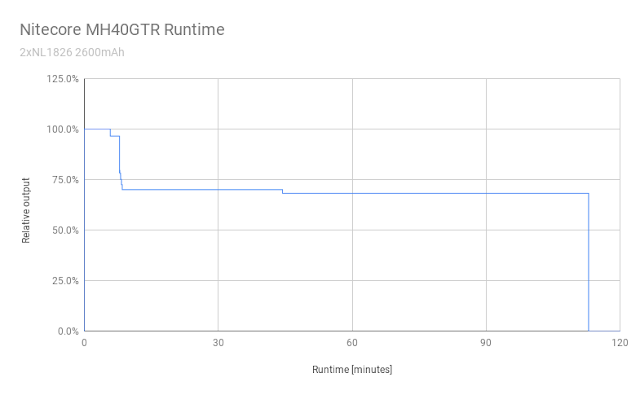 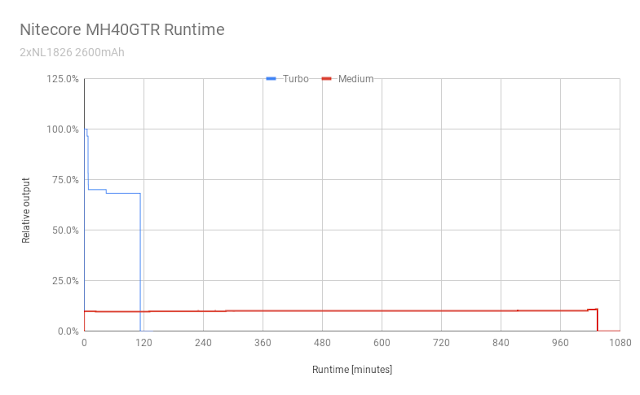 I also tested the light on medium. This mode didn't show any step downs whatsoever, and kept the output steady for the duration of the test. This test lasted about 17 hours. Again, this is short of the advertised runtime, but higher capacity cells should be expected to match the advertised specs.
Note that when the cells die the light shuts off with no warning, and there's no way of checking the charge level on this light.

Charging is handled through a barrel port near the head of the light. Since this light uses a mechanical tail switch, the switch must be on to charge the light. This also means the light can't be used while charging. 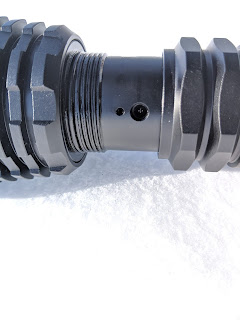 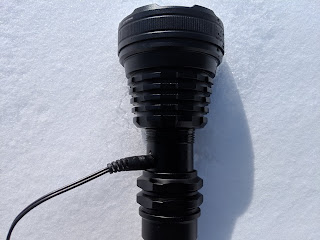 To charge the light, first the protective collar needs to be unscrewed to reveal the charge port. Then, just switch the light on and plug it in. Above the port, there's a small red indicator LED.