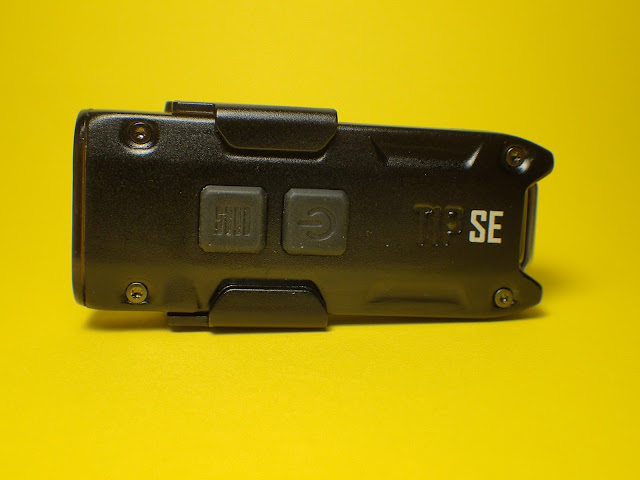 Today I have the Nitecore TIP SE for review. This is Nitecore's newest keychain light, and their first with USB-C. It's a metal light with two switches on the side, and two LEDs at the front.
This adds to Nitecore's large lineup of keychain lights - even the TIP lineup already has the original TIP, the TIP2, and now this entry.

I like this light quite a lot. Nitecore's two button UI is fantastic, and it has a lot of must-haves for a keychain light for me. The body is durable, there are shortcuts to useful modes, and it's quite powerful for its size.
The most exciting part, for me at least, is that this light uses proper USB-C charging, meaning I don't have to carry an extra cable or power source around. That alone has earned it a spot in my EDC rotation.
I do think I prefer the mono-body design that the TIP2 used over this design with the plastic core, and I wish a neutral white model was available, but those are my only minor quibbles with this light. Read on for more! 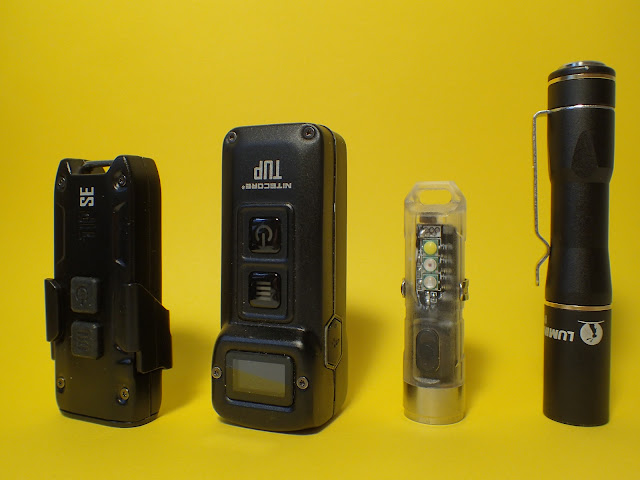 For a size comparison here's a lineup from left to right: TIP SE, Nitecore TUP, Rovyvon A8, Lumintop IYP07. This light is quite small considering the high output it can manage. 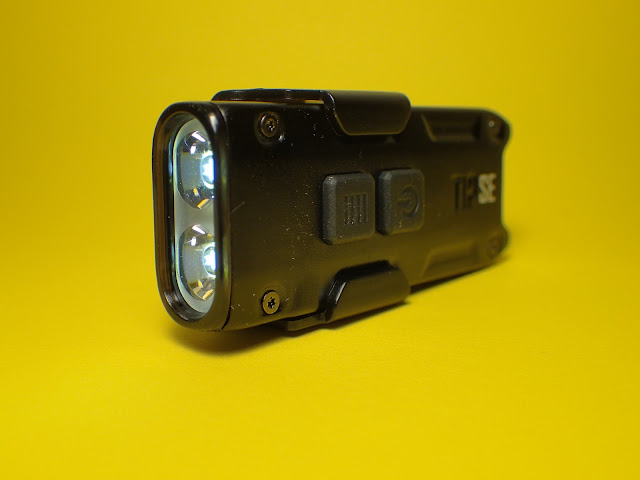 The head of the light has a transluscent plastic bezel. This is part of the main frame of the light, and runs the length of the seam between the two metal halves. A plastic lens focuses the beam from the two LEDs, and is not covered in glass. 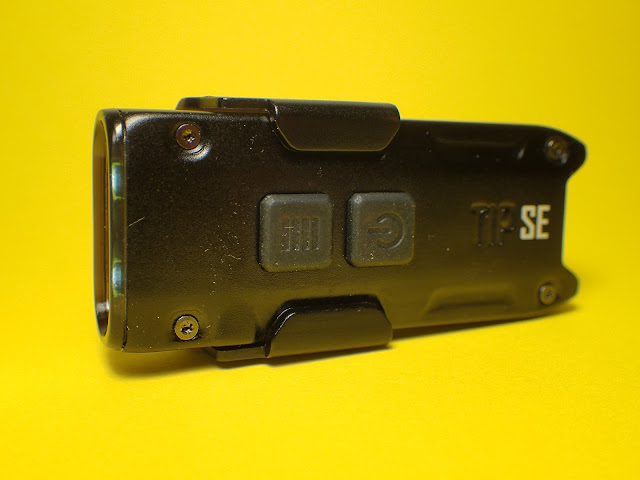 One side of the light has the two switches. The reverse side is identical, but bare. You can see the indents along the body to hold the clip in place. 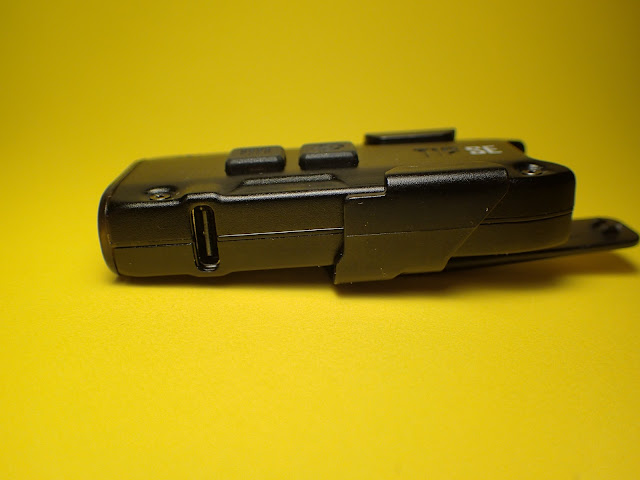 The clip covers the USB-C port to help stop dust from getting in. The light is IP54 rated, which means it should withstand splashing water - but it isn't designed to be submerged. 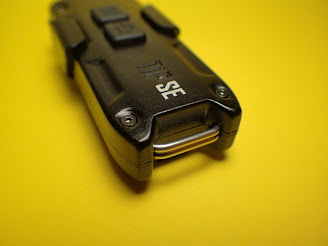 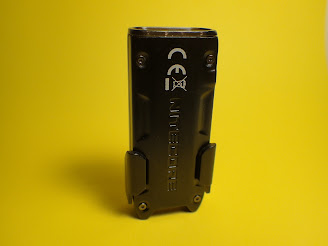 The tail has a solid metal loop to attach a lanyard or key ring. The tail is smartly designed so that it can still tail-stand, despite the ring. 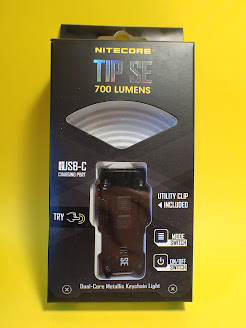 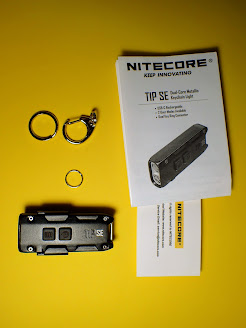 The light comes in a retail-ready box along with:
Notably there's no charge cable included, so you'll need to pick up a USB-C cable if you don't have one already.

This is a keychain light, so ergonomics aren't really too relevant - it would be difficult for something this small and light to be uncomfortable to hold. The flat shape makes it very comfortable in a pocket, and the buttons are very tactile and easy to find. 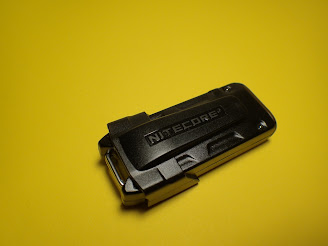 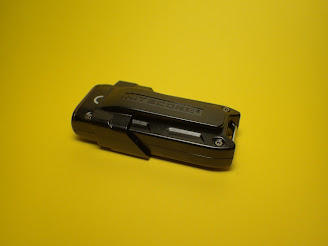 The included clip can be attached to either side of the light, with the opening towards the head or the tail. When placed on the reverse of the light, it protects the switches from accidental activation. When the opening is toward the tail, it covers the USB port against dust or other contaminants that could gum it up.
I don't find the clip is very usable as a pocket clip since, when used, it leaves about a third of the light protruding and feels as though it will fall out too easily. The clip also works to attach the light to the bring of a cap for use as a makeshift headlamp.
Aside from that, the attachment point on the tailcap is very solid. There's no magnets anywhere on the light, which many prefer for a keychain light. 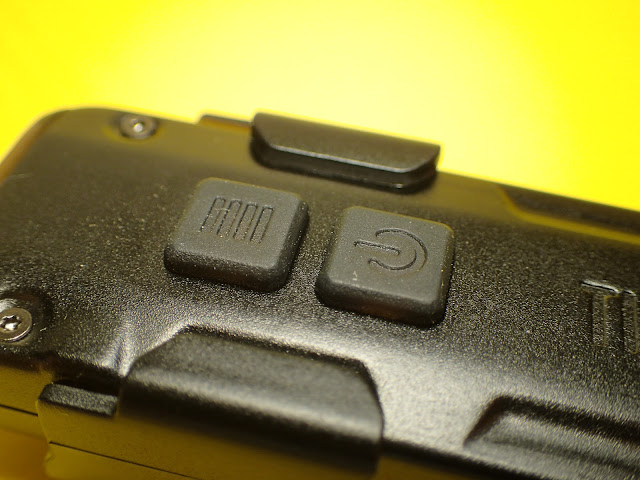 Two side switches control the light - a power switch, and a mode switch. Operation is as follows:
In addition, the light has two mode groups - 'daily' and 'demo'. In demo mode, which is the default, the light turns off 30 seconds after the last button press, to prevent it from draining if accidentally activated in your pocket. Hold both switches simultaneously from off to switch between the modes.
I like this UI a lot. It has shortcuts and momentary access to all the modes I could want, and is very intuitive. Battery check is also a very useful feature for a pocket light with a smaller cell like this.
Advertised modes: 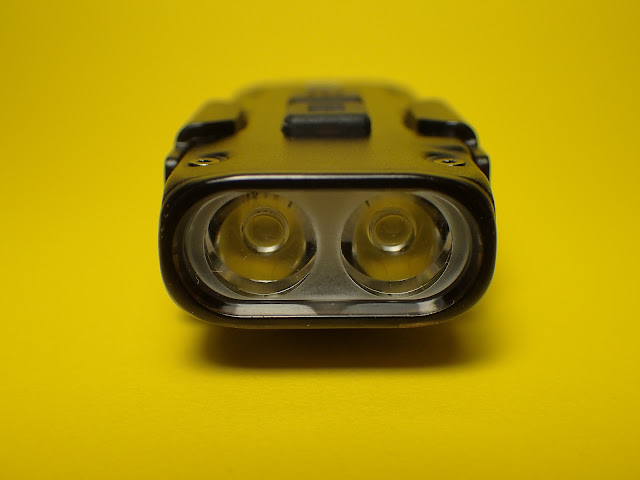 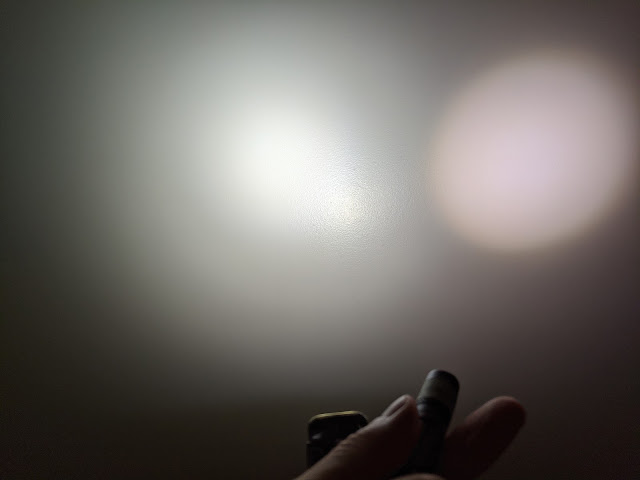 Compared to the 4500K Nichia E21A, TIP SE is cooler, but very even across the beam.

This light is powered from a build in 500mAh cell. 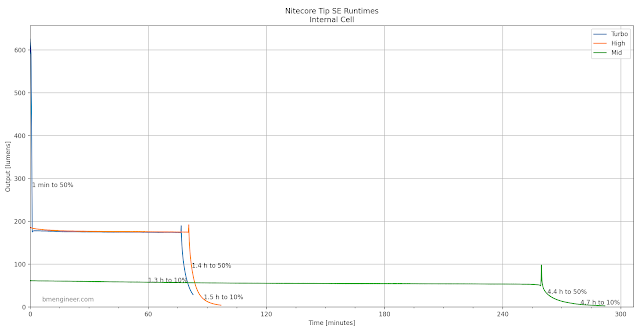 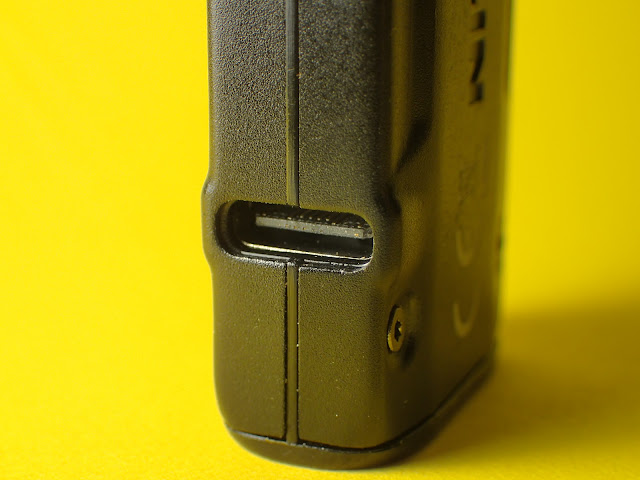 This light uses a USB-C port to charge and, excitingly enough, it will charge with a USB-C to USB-C cable. I tried it with my Pixel charger, an XTAR charger, and even my USB-C hub, and all charged the light just fine. Fantastic! As far as I know, this is the first keychain light to properly support USB-C charging. 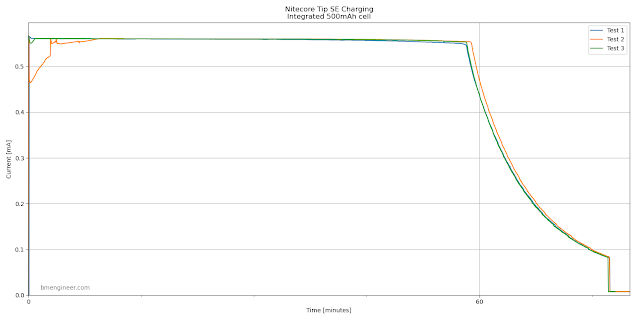 I measured the current over USB for 3 tests, and found the charging to be remarkably consistent. From dead, charging takes a little over an hour at a current of just above 0.5A, with termination just below 0.1A. 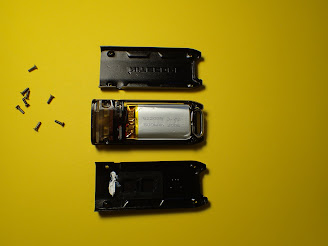 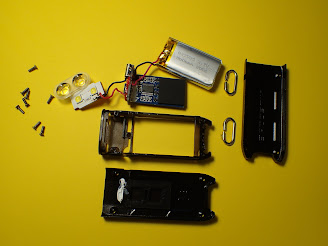 It's easy enough to get into the light by removing the 4 Torx screws from either side of the case, and separating the metal shell from the plastic frame. Once those are out and the battery is eased out of position, the driver, MPCB, and lens pop right out.
There's some glue holding the tail rings in place, and some thermal compound to help transfer heat from the LEDs to the case in front of the switches. There's also some conformal coating on parts of the driver, but not much in terms of sealing (which makes sense, since the light is only rated to be splash proof). 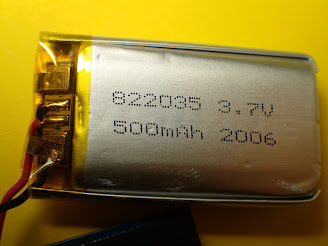 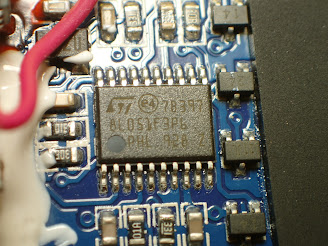 The cell is 500mAh, as advertised, and the markings on the chip controlling the light can be clearly made out. 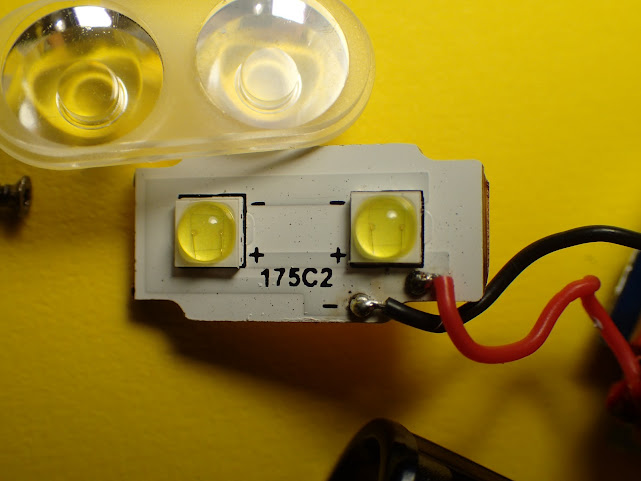 The two LEDs are on a thick copper PCB, and the lens appears to be a custom one - as was the case with the TIP2. 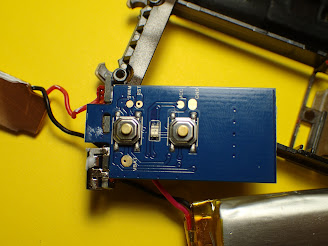 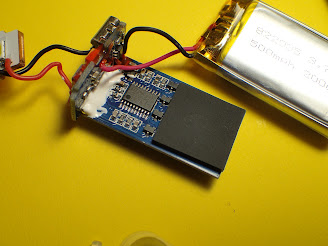 The driver has the two switches and indicating LEDs on one side, and most of the circuitry on the reverse.

This product was provided free of charge by the manufacturer. I was not paid to write this review, and have tried to be as unbiased as possible.
Manufacturer's product page
Product listing on Amazon, and the gray version (affiliate links)