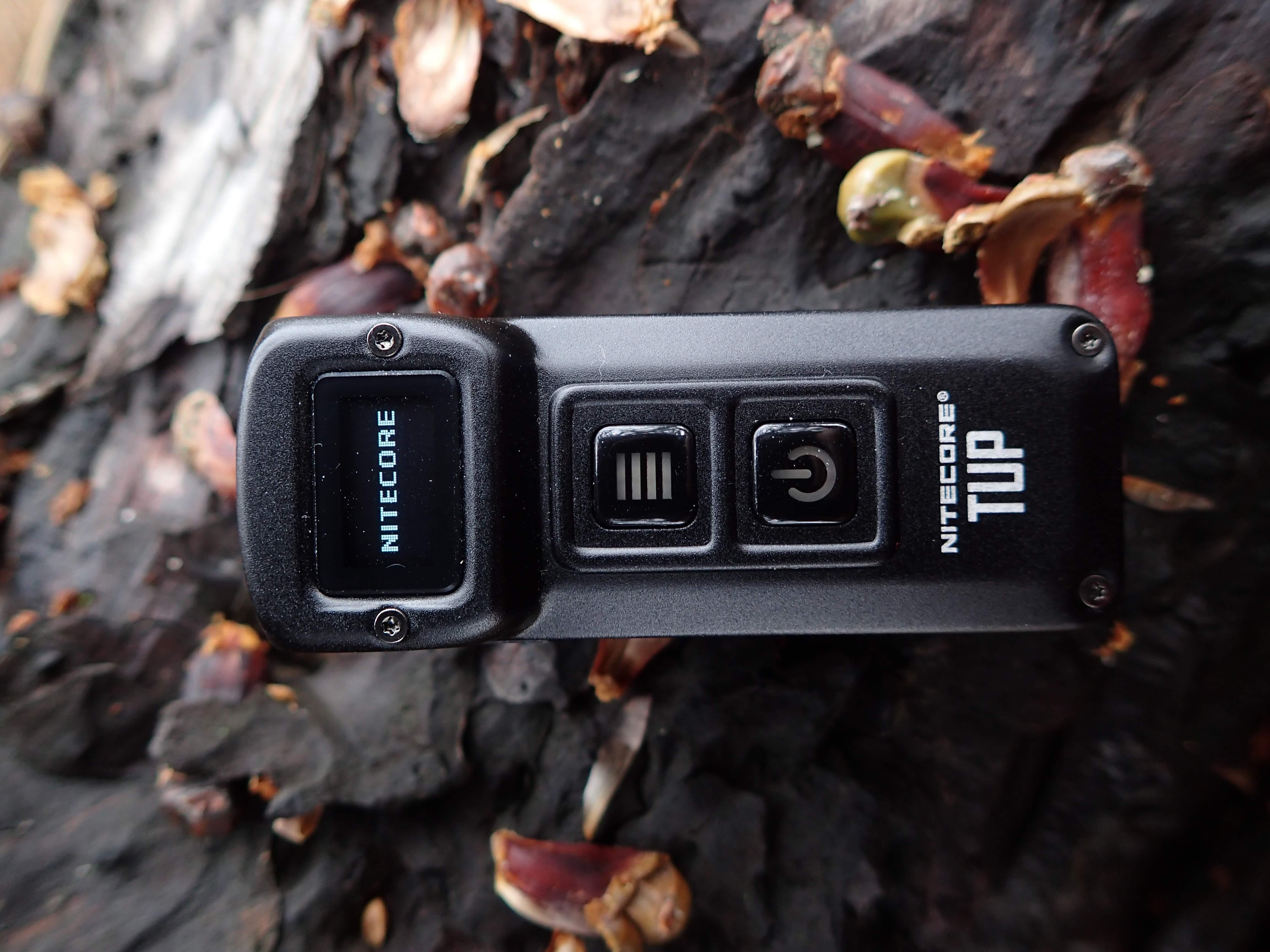 Nitecore was generous to send me over an early sample of the unreleased Nitecore TUP. Now that the light has been released, I can finally share my thoughts on it. This light is the current flagship model in their T series of keychain style lights, and uses a sealed internal cell. Compared to the other lights in the series this model is larger, more powerful at 1000 lumens max claimed output, and has an OLED display.

This light is an interesting form factor, and is a bit larger than most keychain lights on the market. The UI is good, the output for the size is great, and it feels well built. Overall, I think Nitecore made a great light, and I know the OLED screen and huge output will make this a popular choice. The only major downside to this light is that the cool white beam won’t appeal to most enthusiasts.

The light measures 67.2 mm long, 26.0 wide, and 19.1 mm thick at it’s thinnest point. My first impression after pulling it out of the box was that it would be far too large for a keychain, but it’s actually both shorter and narrower than my car fob (though it is a bit thicker). For myself, it’s a great size for pocket carry, and it’s very comparable to the 16340 lights that are quite popular with the EDC crowd. 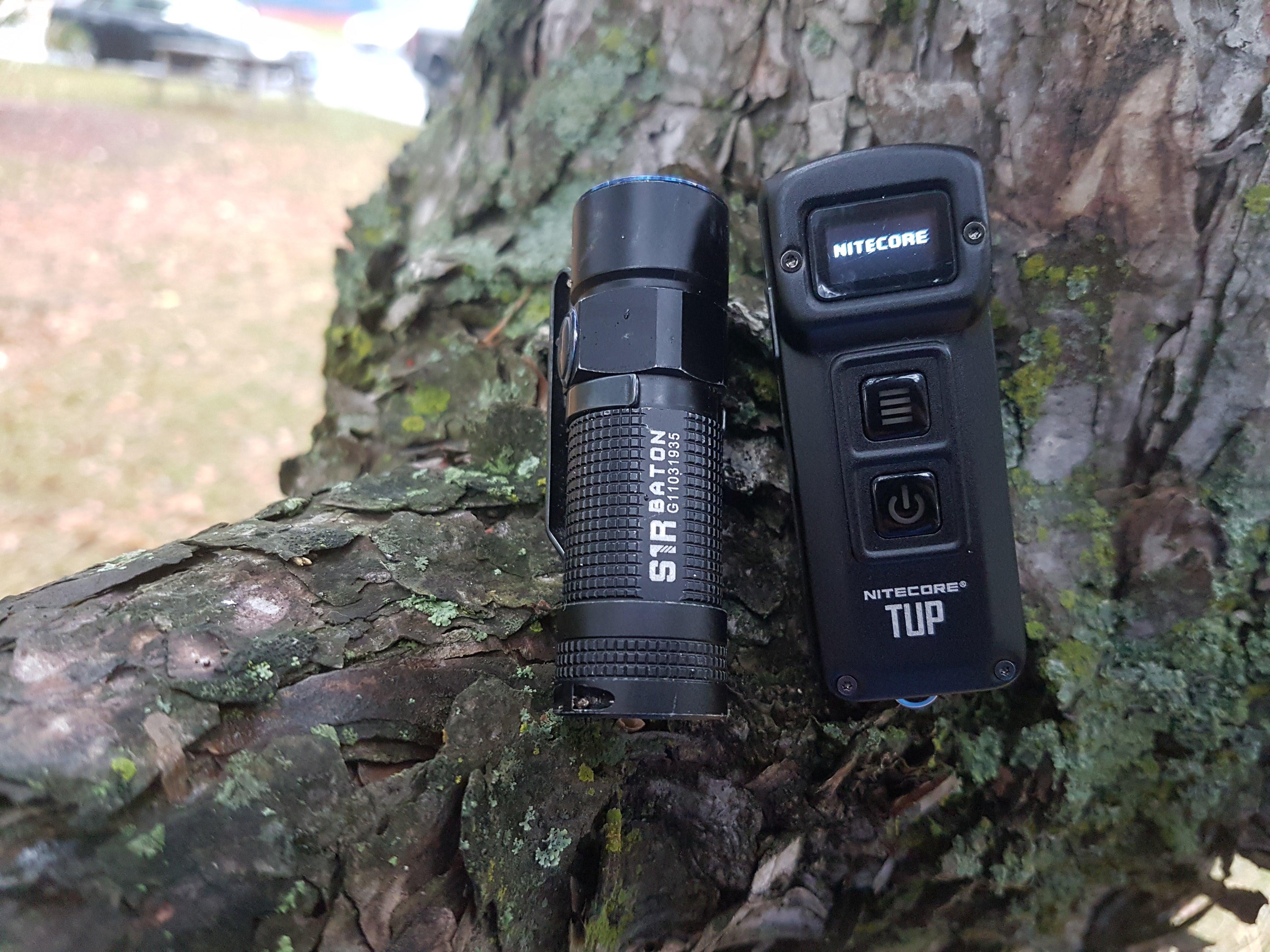 The obvious place to start with this light is the side with the screen, which I’m going to call the top. The TUP top, if you will. 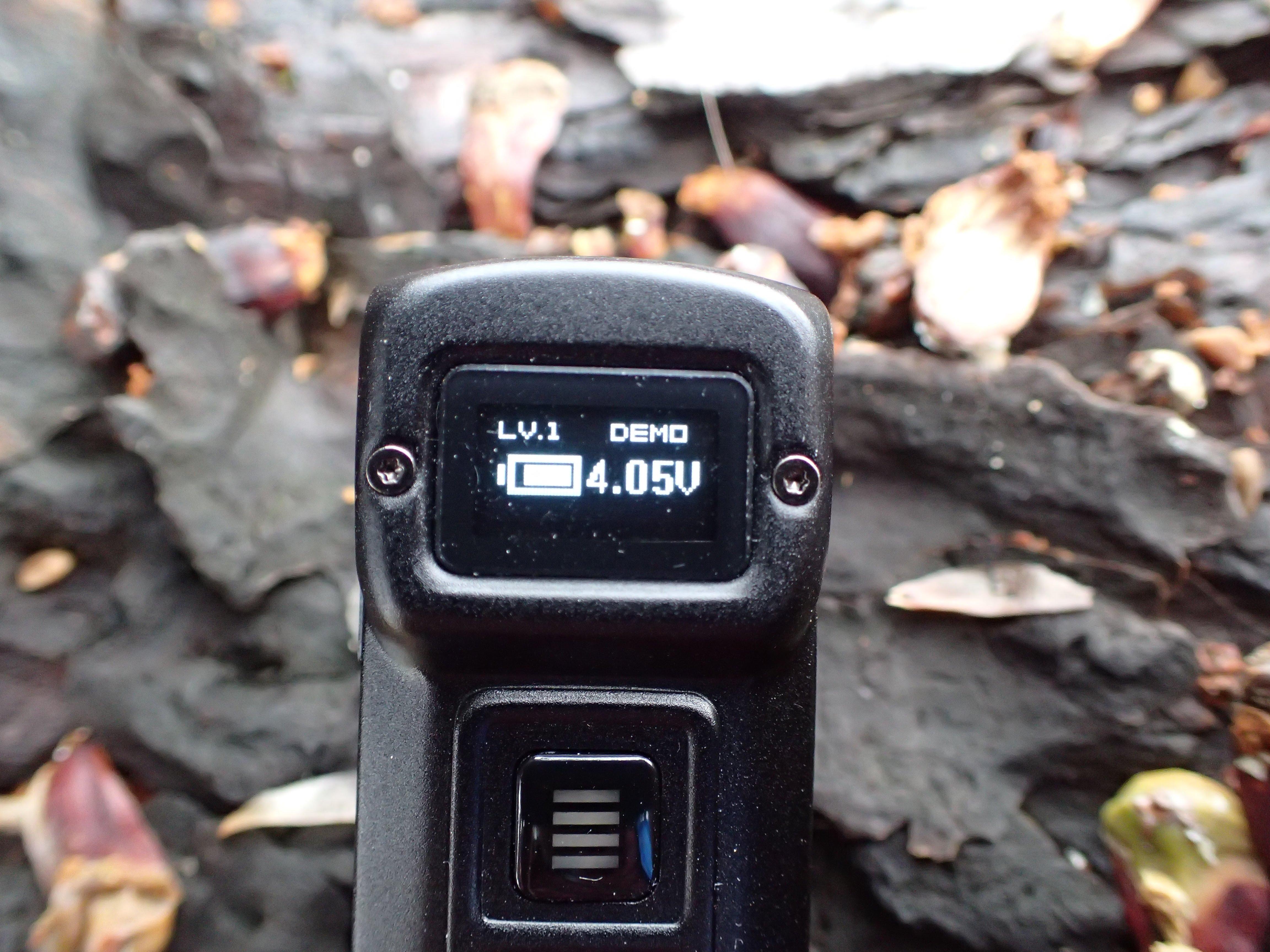 On the top of the light, the first feature is the OLED display. This is a fun little display that shows a surprising amount of data, depending on the context. Things I’ve seen on it include:
By the time I was done playing with the screen, I was half surprised it didn’t have a watch built in to it. It’s extremely versatile! 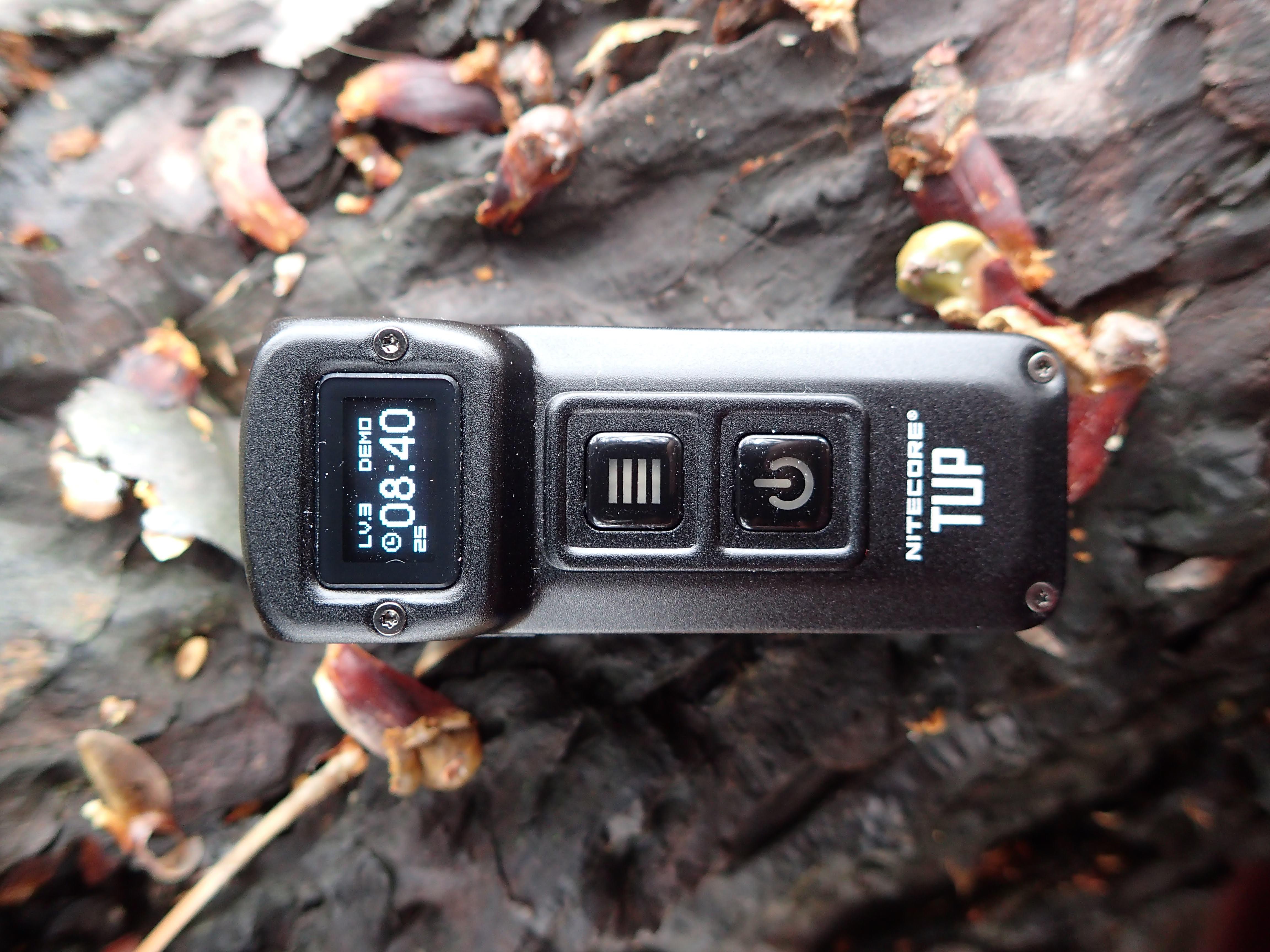 Under the screen, there are two hard plastic buttons - a mode button and a power button. Both of these have a blue backlight. There’s also the brand and product names lasered into the aluminum case of the light, and 4 screws holding the thing shut. 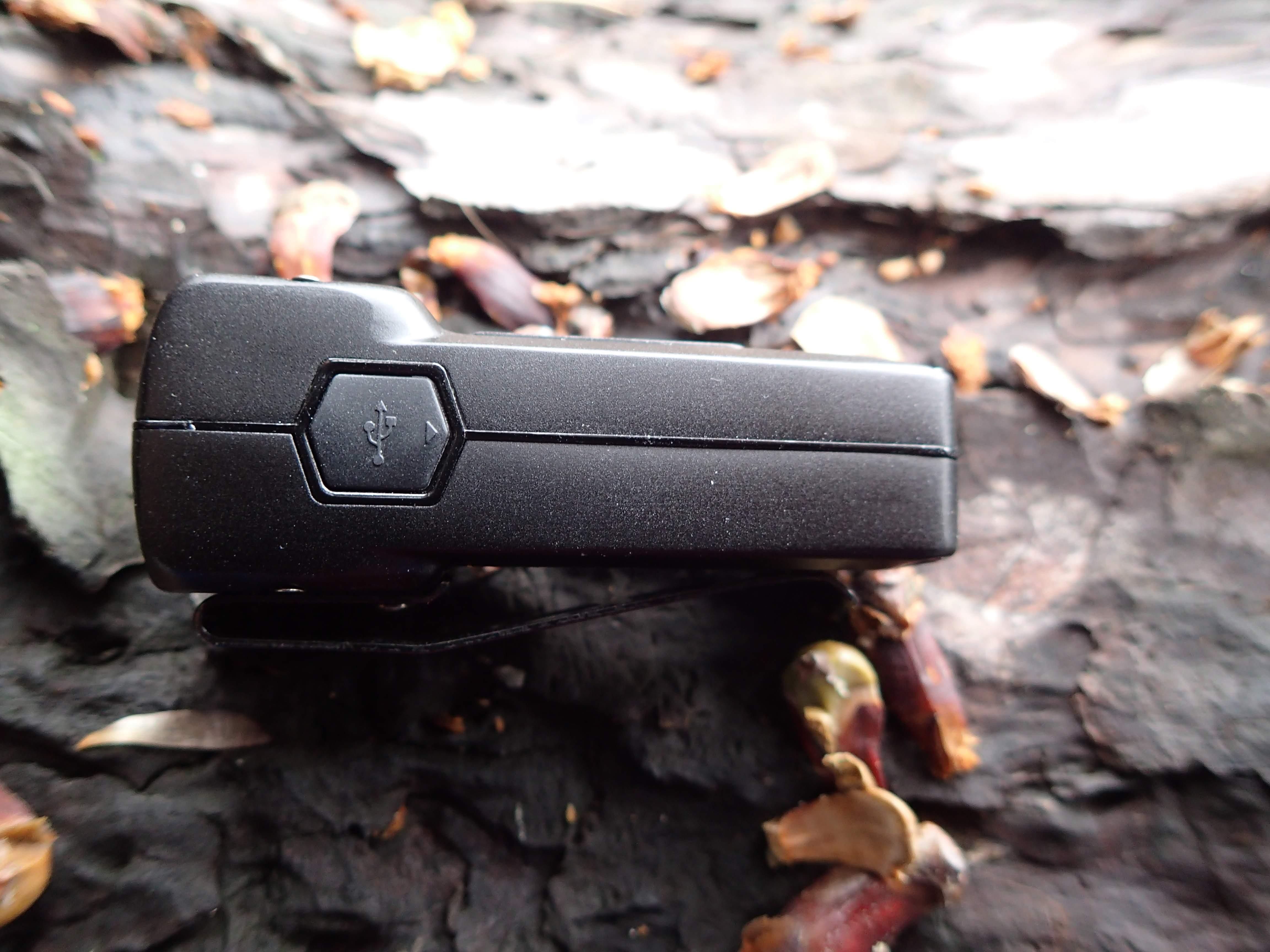 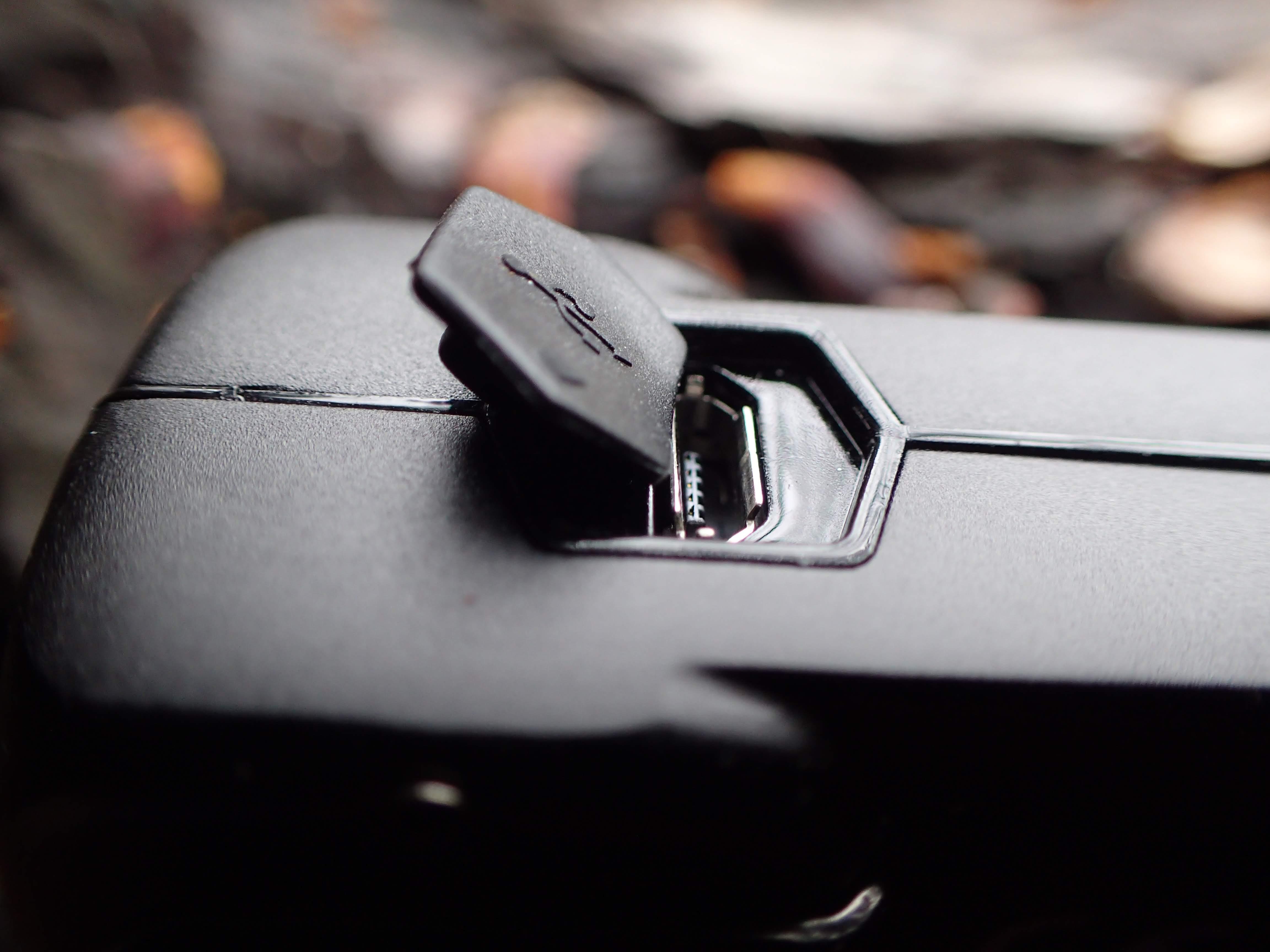 After the top, the rest of the light has much less going on. The one side is completely bare except for the seam where the two halves meet, and the opposite side is the same with the micro-USB port. There’s a rubber flap that seats inside the port to keep dust and rain out, although I wouldn’t recommend submerging this one if it can be avoided. 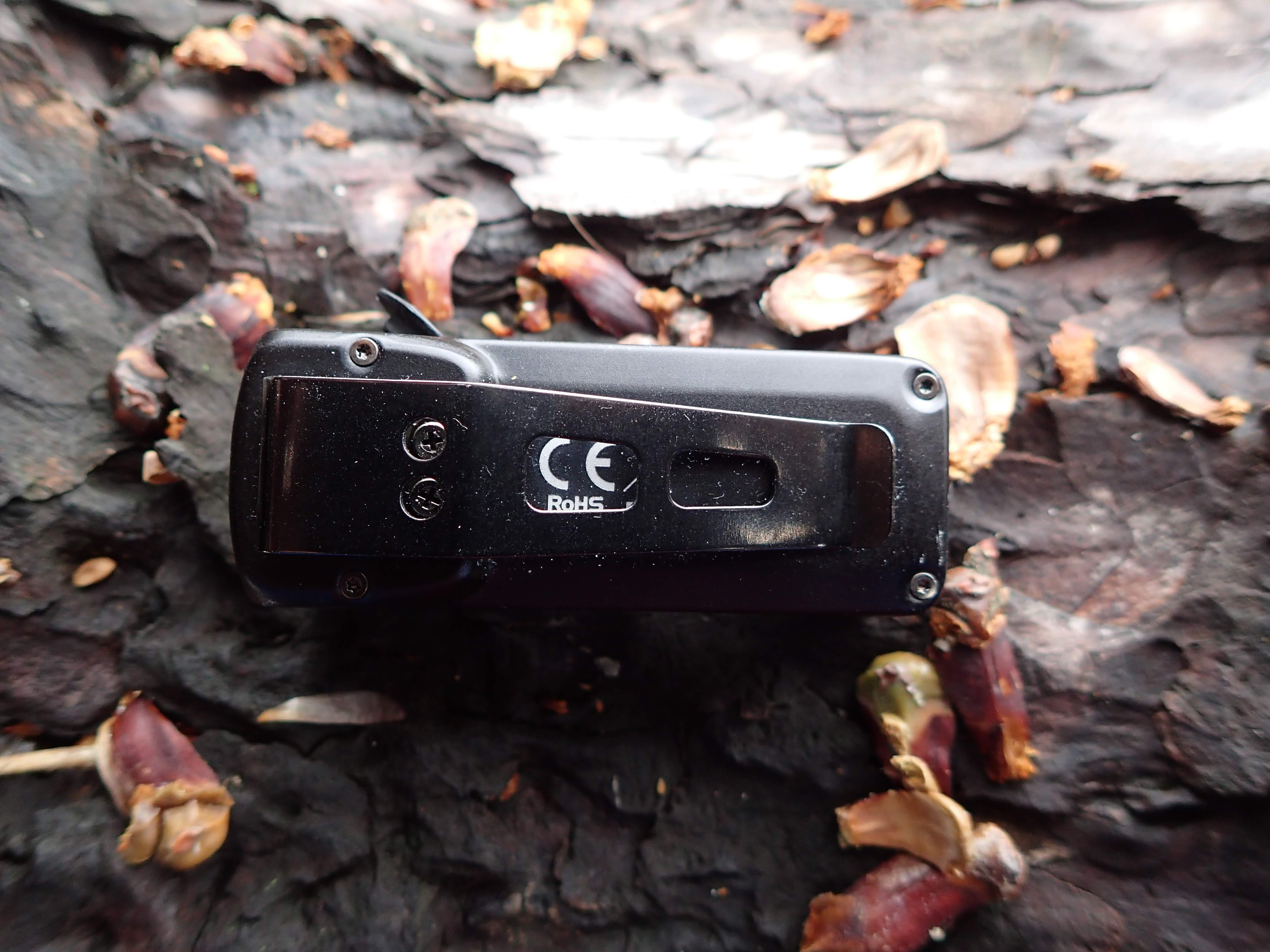 The bottom of the light has a thick, screwed on pocket clip for head-up carry. Again, we can see 4 small Torx screws holding the light together. There is some regulatory labeling etched in under the clip. 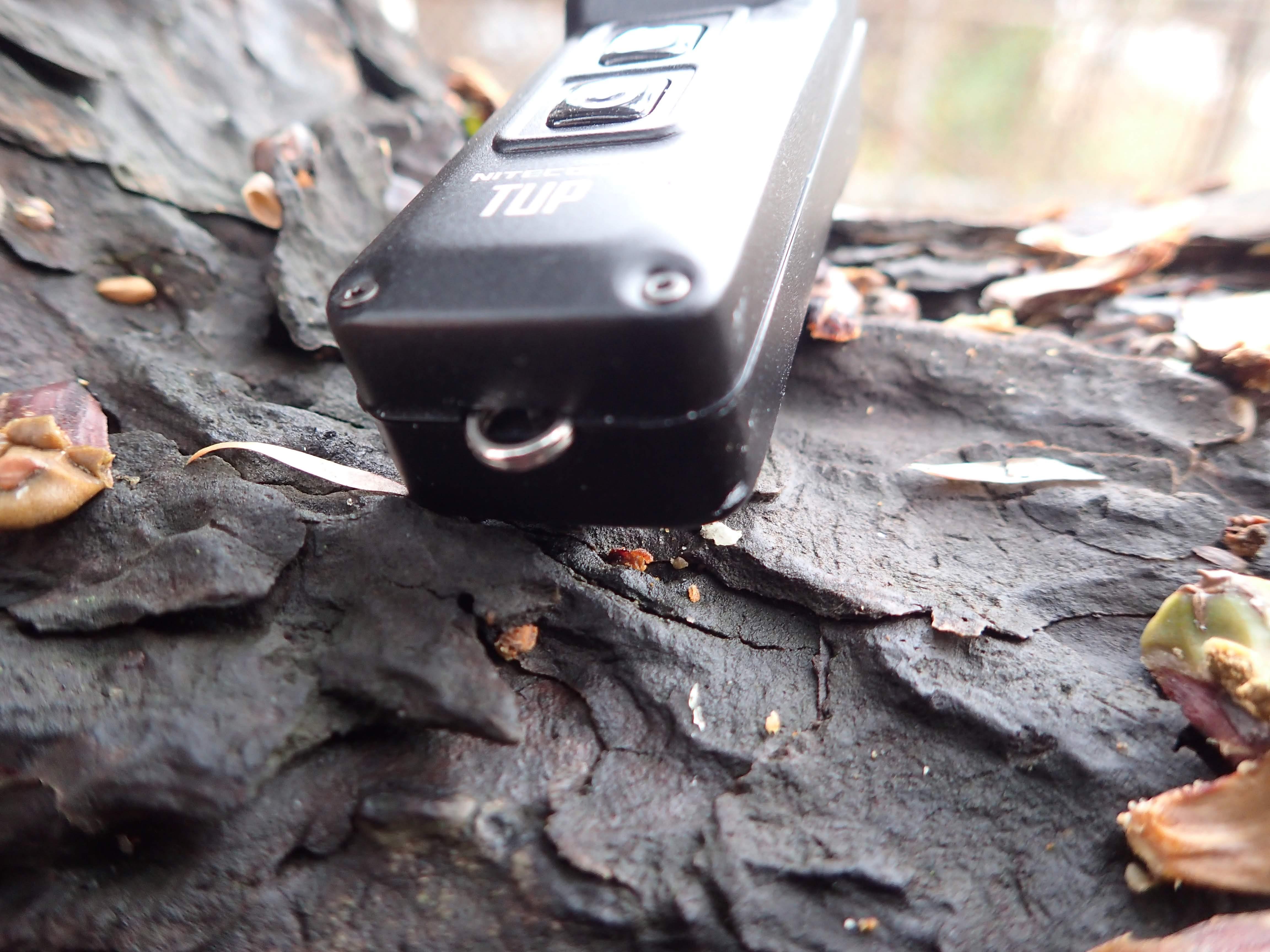 The tail of the light has the obligatory key ring, and no other notable elements. The key ring does mean that the light is not able to tailstand. 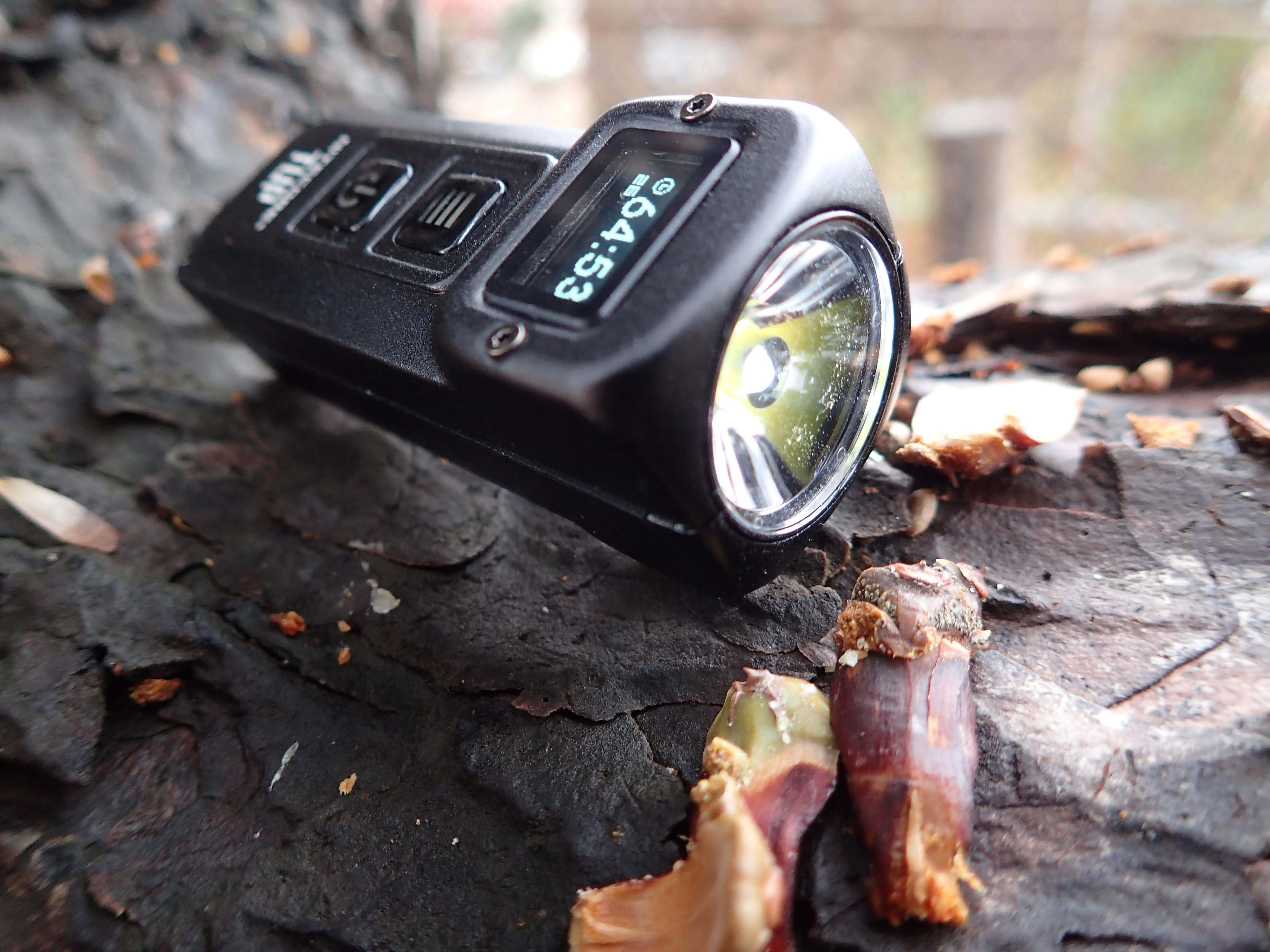 The head of the light is almost completely filled with the optic, which sits nearly flush with the ‘bezel’.

Nitecore has a great habit of sending their newest lights to me without any packaging whatsoever, so my sample included only the light and they keychain. Production lights will likely also include a manual and packaging.

The light feels good in my hand. As it is a smaller light, it’s not one I would want to hold for an hour long hike or something similar - but that’s also not the intended use of the light. For quick tasks, it’s great.
The finish is smooth without any knurling or other accents to add grip, so if you don’t have a set of keys hanging off the tail to keep it in your hand I would suggest keeping the clip installed. The ramp on the clip, intended to help it slip onto a pocket, is enough to help get a good grip on the light. 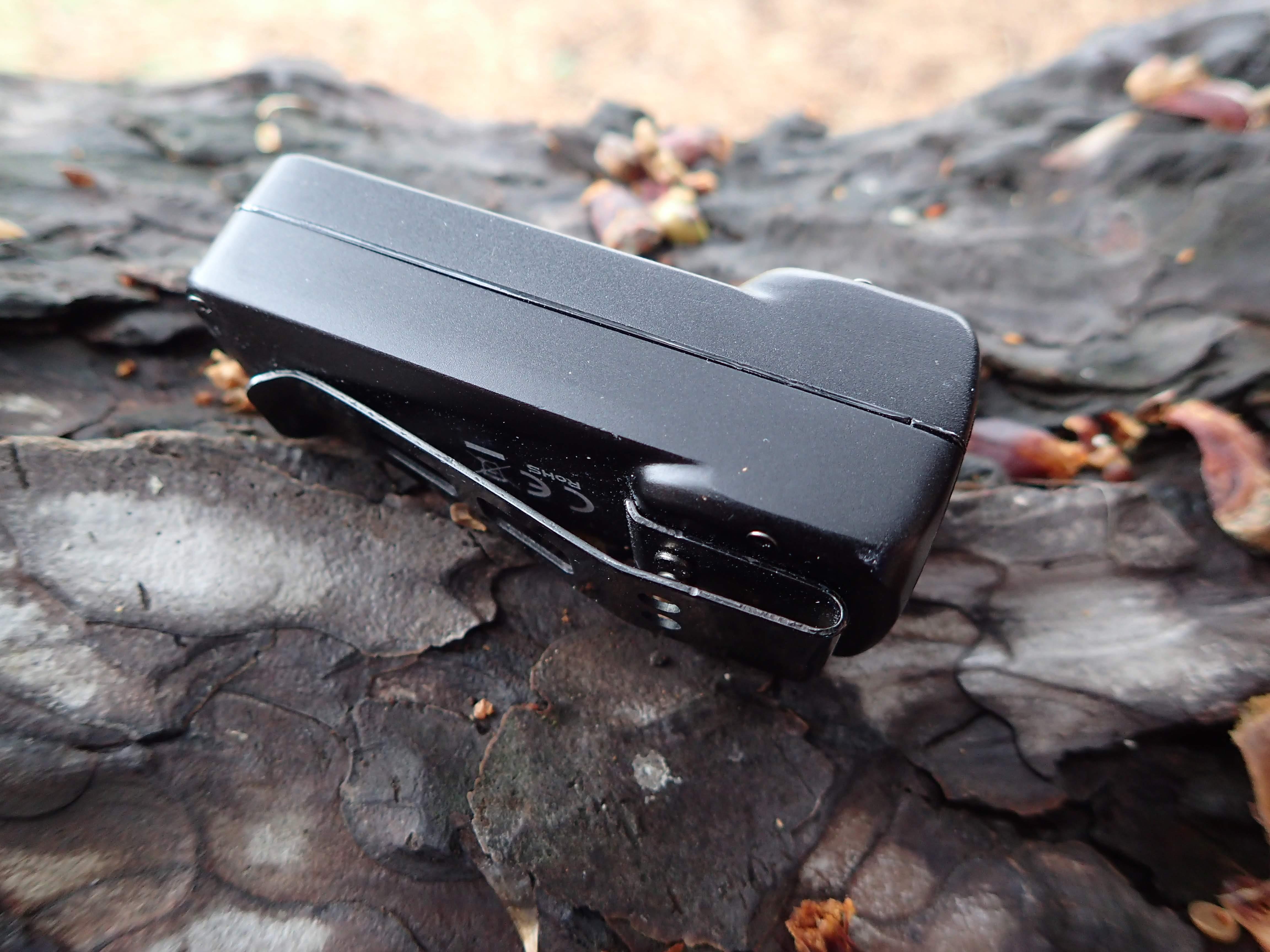 The clip is head up and very deep carry. It’s held on to the body of the light with two #0 phillips screws. The positioning of the clip means it can be clipped on to the bill of a cap and used as a headlamp for hands-on tasks. This might technically be the smallest and lightest 1000 lumen headlamp.
As this is a keychain light, the obligatory key ring is present on the tail, and Nitecore includes a little lobster claw style clip.

There are two independent mode groups that can be enabled on the TUP - daily, and demo. The only difference between the two modes is that in demo mode, the light will automatically shut off 30 seconds after the last button press. Based on the name of this mode, it sounds like it’s meant to keep the light from draining in the packaging, but I found it a useful alternative to locking the light out in my pocket. 30 seconds is plenty for me to unlock a door, pick up after my dog, or do any number of other tasks suited to a light this small. To switch between the two modes, simply hold both buttons down - a message on the screen will helpfully show you the mode group you’ve switched into, and the main LED will blink to indicate the selection as well (once for demo, twice for daily). 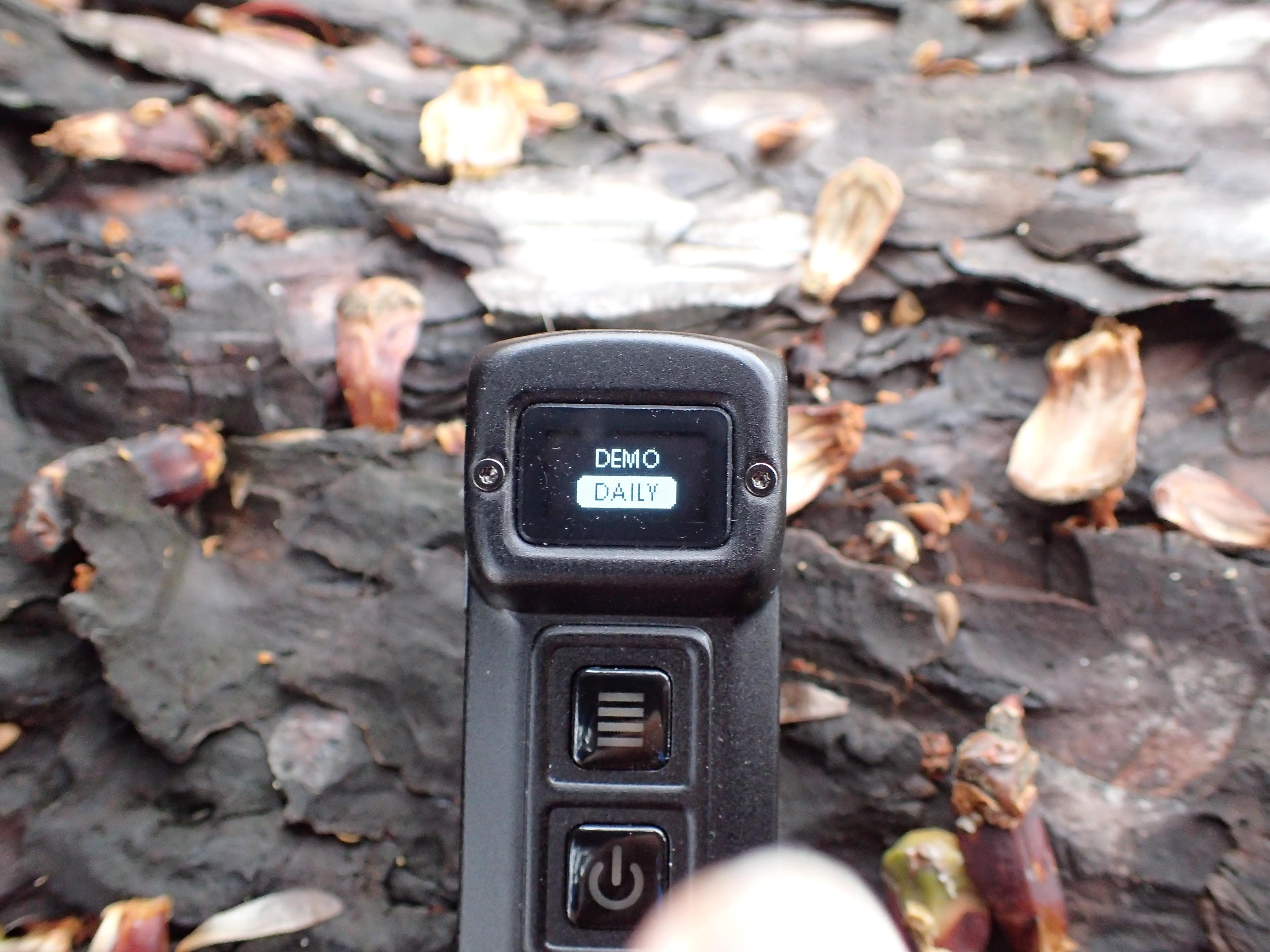 In either mode group, the usage is the same:
This is a good UI, and has almost everything I could hope for. A non-momentary turbo option would be nice, but it’s probably smart that Nitecore did it this way to preserve cell life and prevent hot pockets.The mode spacing is good to, with levels claimed at 1, 15, 65, and 200 lumens, in addition to the 1000 lumen turbo. 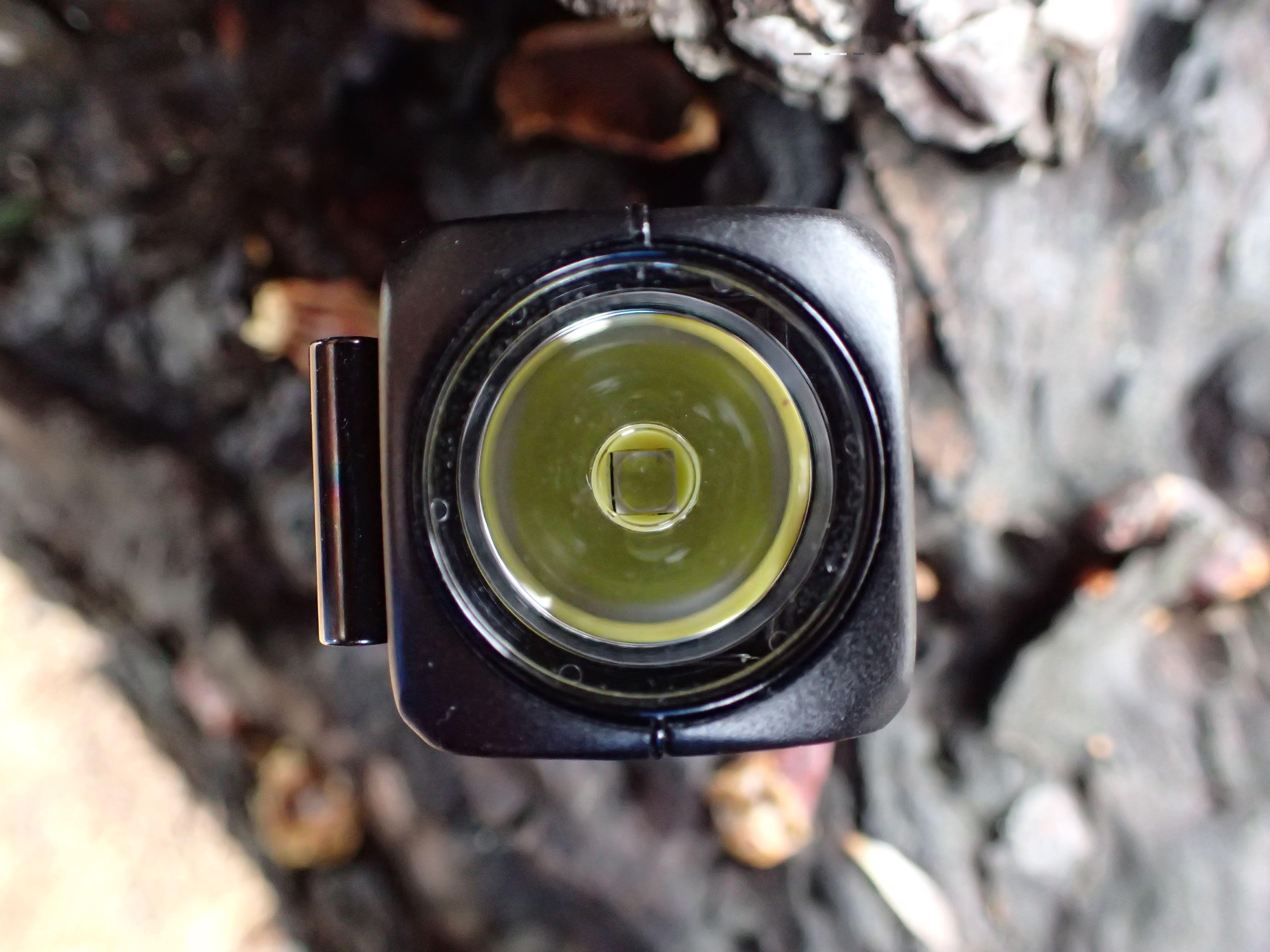 This light uses a cool XP-L HD in a 21 mm TIR lens. It’s an interesting TIR in that it has a very clear view of the LED when looking directly at it. It seems almost like there’s a hole in the optic, or a clear pipe in the center? I can’t really say what this does to the beam. What I can say, is that the beam produced is functional, but not as pretty as some others.

The light is powered from an internal cell. Although I prefer replaceable cells when possible, that would require a different form factor for this light and would probably result in the finished product being larger, so this seems like a reasonable design compromise from Nitecore. 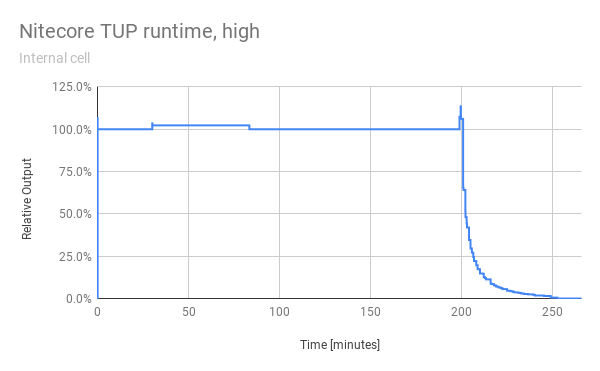 On high, runtime was flat for 200 minutes before starting to track down rapidly. Final runtime in this mode is over 3.5 hours. 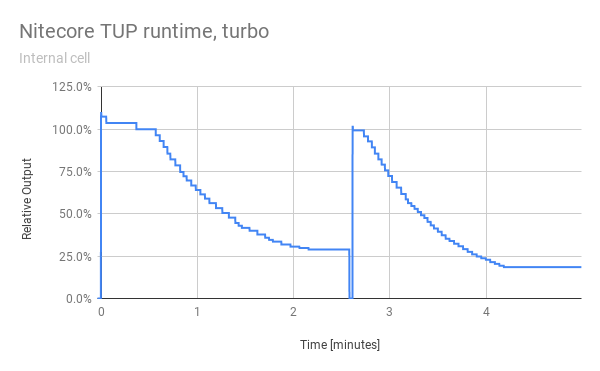 Holding the button down on turbo, the light starts to throttle pretty quickly, although it does hold close to its initial output until the 30 second mark, wen ANSI measurements are taken.Turbo was reset once in this test, but didn’t quite bounce back as high as the first run. The light got warm during this run, but never concerningly so.

The light is charged through a micro-USB port on the body. After draining the cell, I measured the charge rate at 0.5 A. Charging from dead to full took a little over 3 hours. Power into the light was 6.5 Wh, although this isn’t necessarily a great indication of the actual cell capacity. 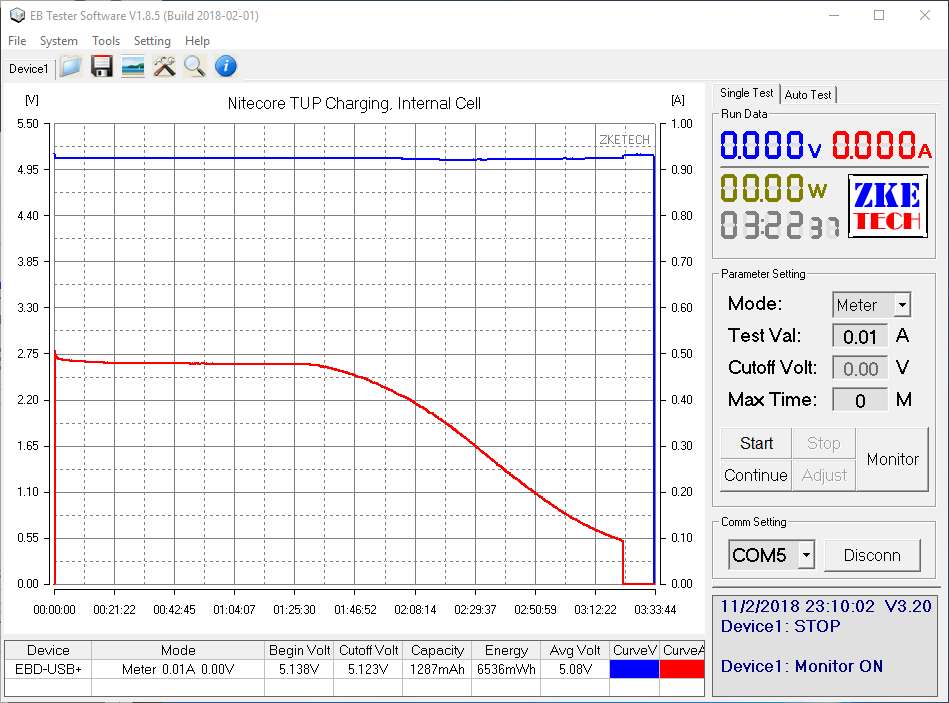 While charging, all the functions of the light work just as they do on cell power - including a single tap of the mode button to check the current charge state. The indicator LED behind the two buttons flashes during charging, and turns solid once complete.

The steps in this section likely voided my warranty and, if replicated by you, will do the same to yours. Always take proper safety precautions when working with electronics and tools. This is purely investigative, and is not intended as a guide.To open up the back of the light, first we need to remove the two #0 Phillips screws holding the pocket clip in place. The threaded holes are deep enough that the screws can be installed with the clip removed - otherwise you’re left with two holes in the side of your light. 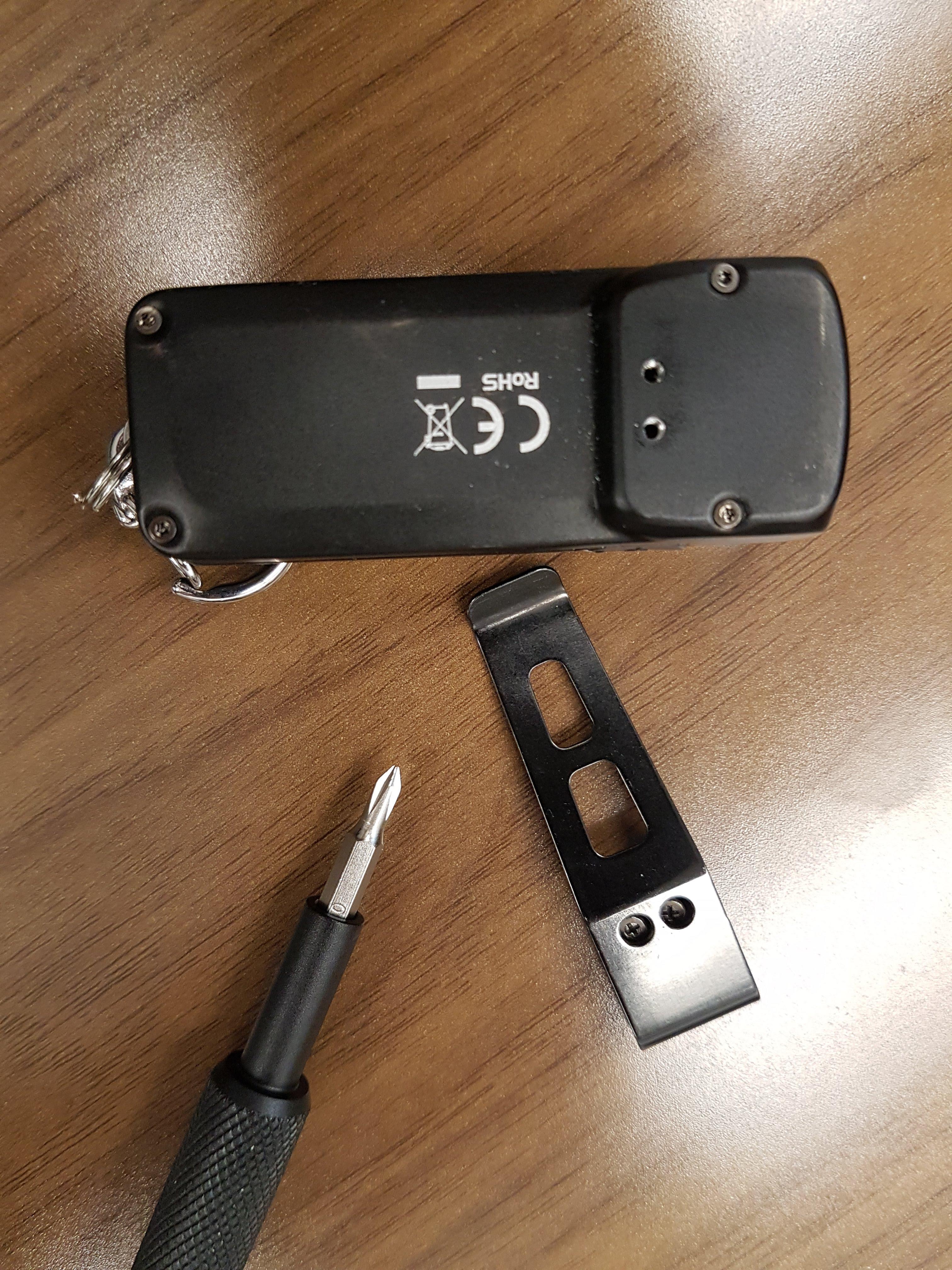 Once the clip is out of the way, the four T3 screws can be removed and the back cover taken off. This reveals two pouch cells, an aluminum heat sink that doubles as a secure mounting point for the clip, and a glimpse at the driver. 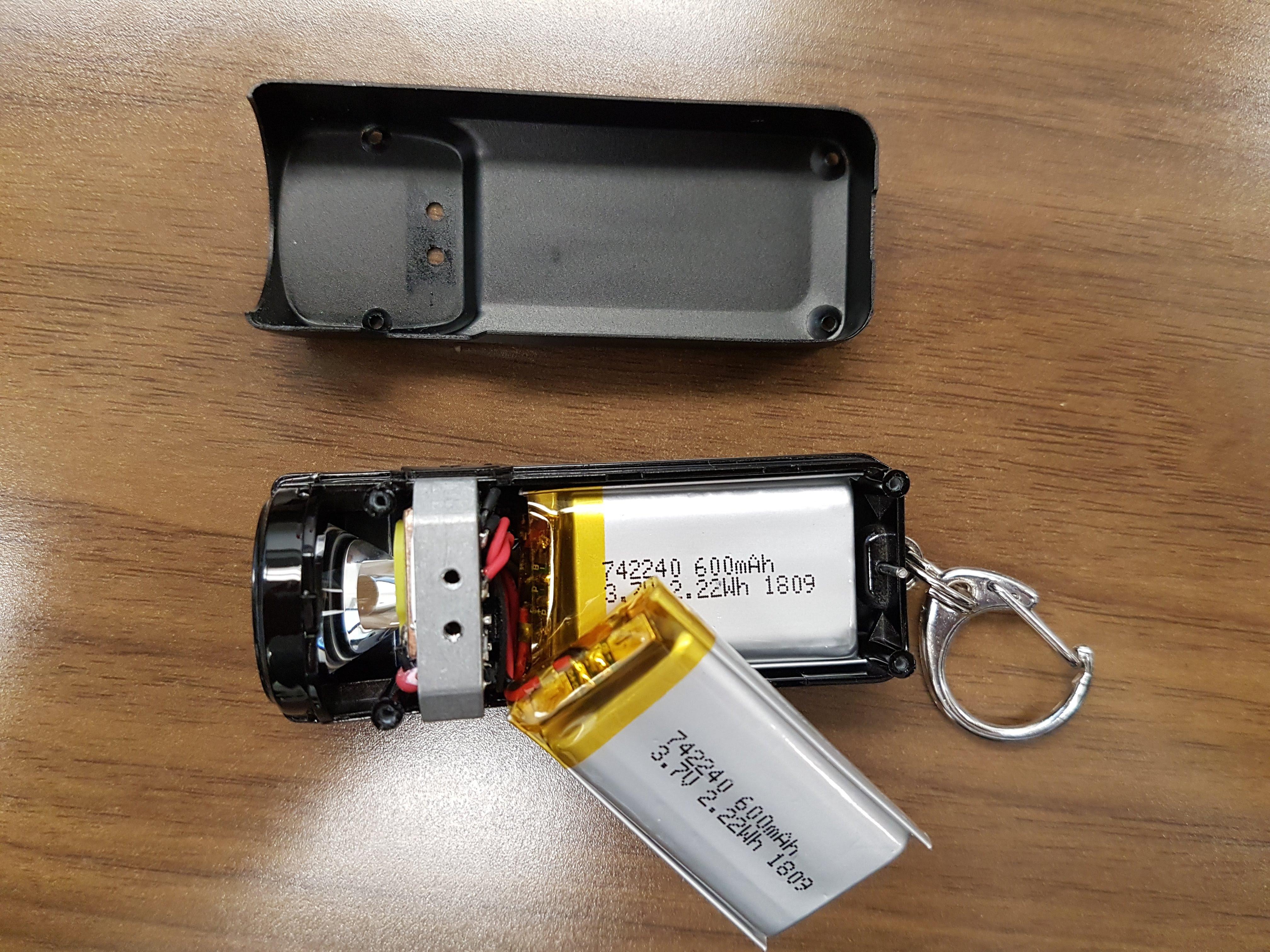 Removing the four more T3 screws on the opposite side of the light shows the button board, which seems to have some driver components on it as well. Once both halves are removed, the TIR and it’s retaining bezel pop right out the front. The TIR lens measures 21 mm in diameter and 23.7 mm deep. There’s a lip running around the diameter to hold it in place, and this measures 1.6 mm thick. 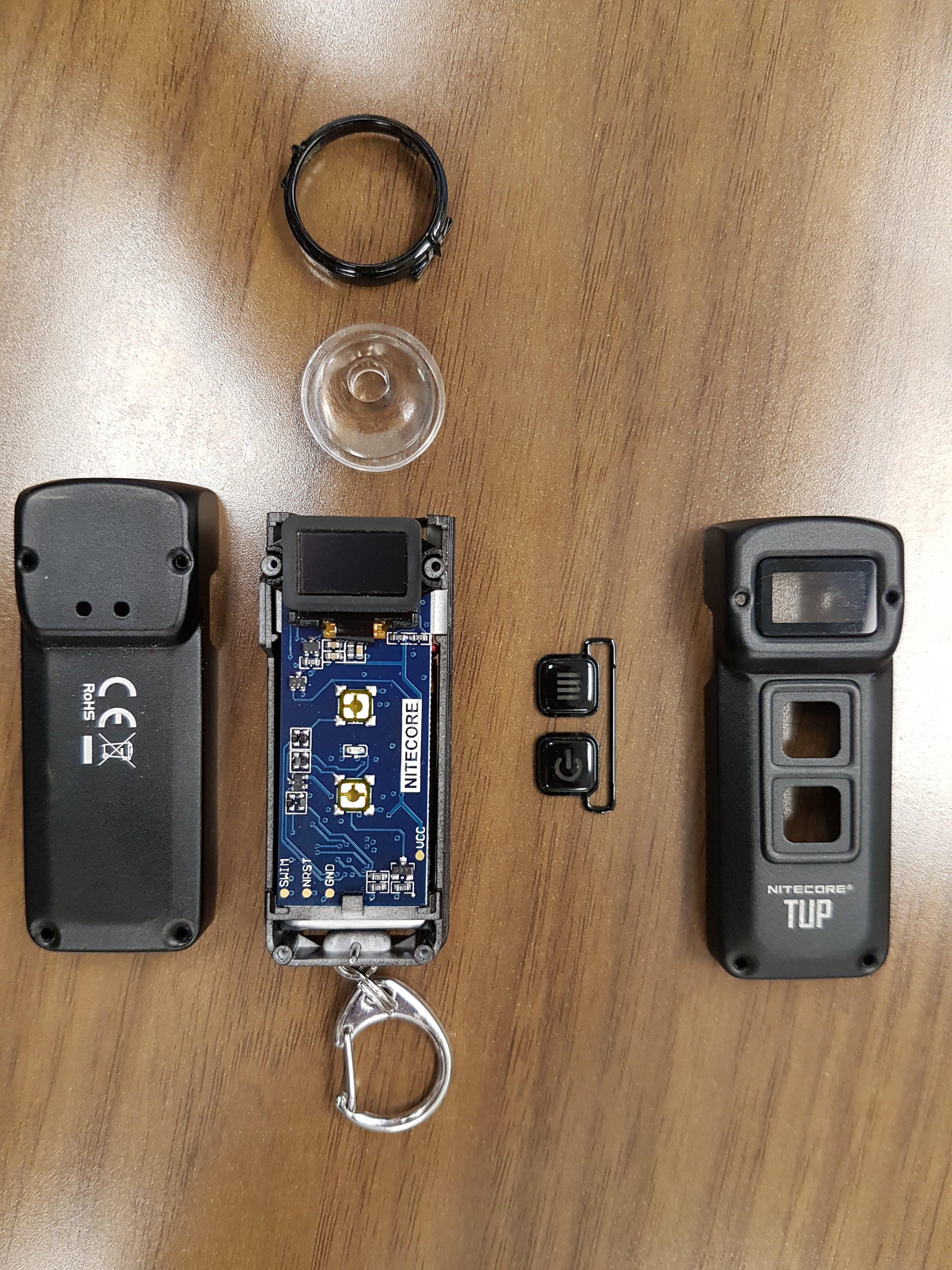 The MPCB has a yellow plastic insulator installed around the XP-L HD, and is screwed to the heatsink. 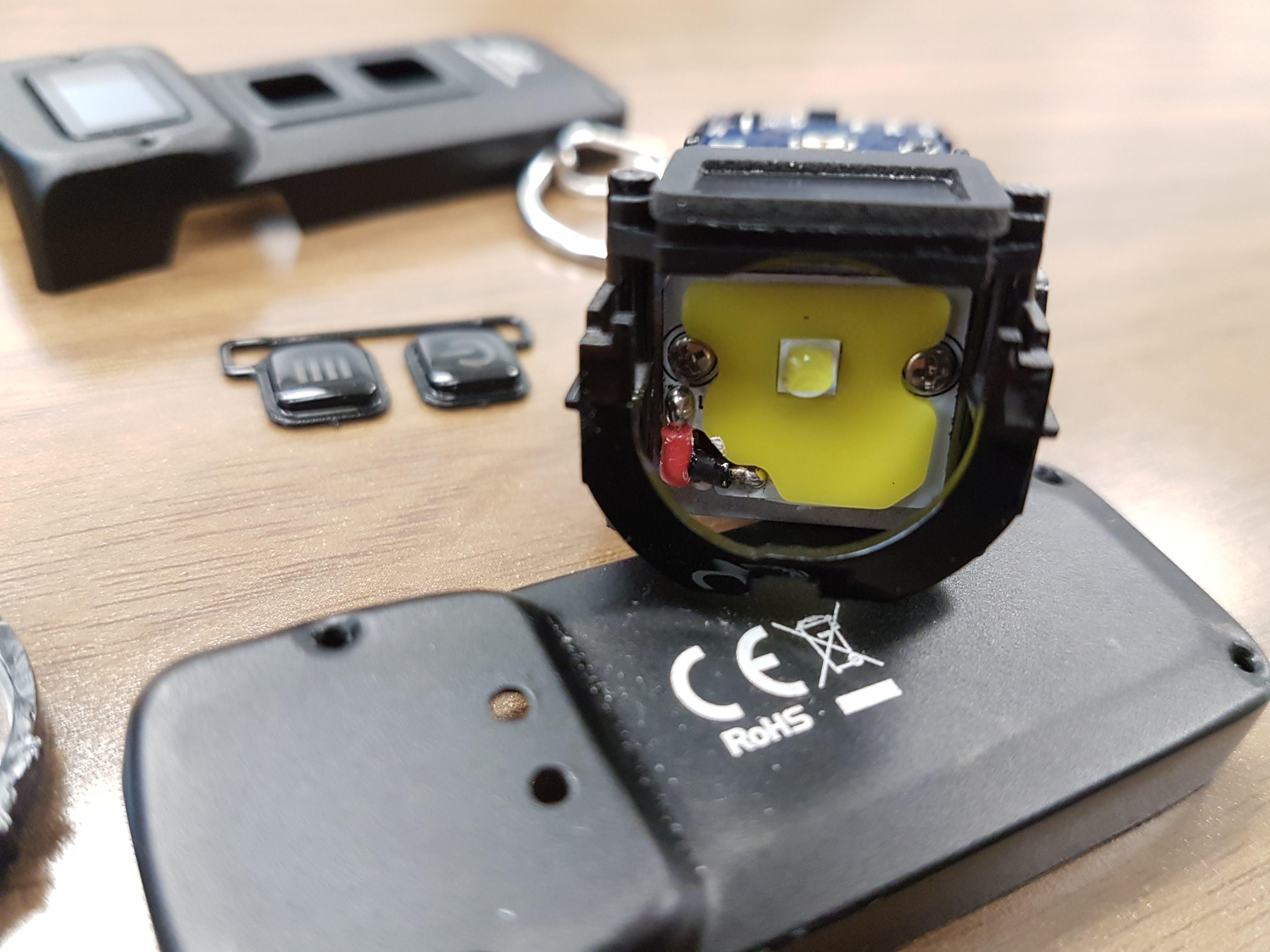