The Penoval USI702 is, at the time of writing, their latest offering for USI compatible chromebooks. In what is becoming a somewhat crowded market, this model is trying to stand out from the pack with a built in eraser feature and USB-C charging.
The only USI compatible device I have on hand is the Asus CM3 tablet, so all tests and opinions are based on experience with that device.

This is definitely a major upgrade from the garaged stylus that ships with many devices, and I was impressed with how well the eraser tool works in most writing and drawing apps. If you're looking for a dedicated stylus to use with your USI compatible chromebook, the USB-C charging may make this option worth the premium price. 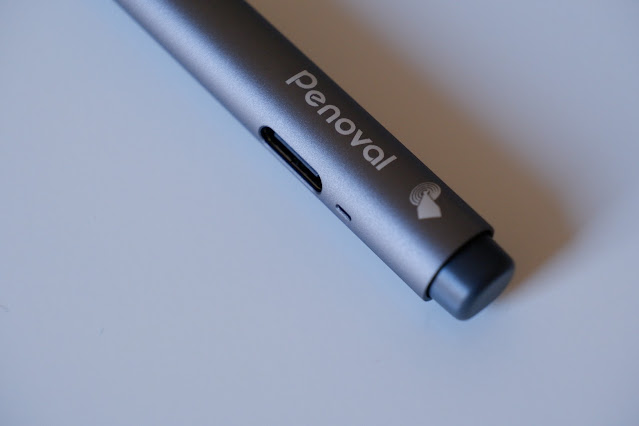 The build quality feels fairly solid. From the images I had assumed this would be made of aluminum, but it's not - I'm almost certain the pen is entirely plastic. It doesn't feel cheap at all, but it is very light. There's no bend or flex when you're writing with it, but it does have the usual rattling noise from the tip of the stylus and the 'eraser'. 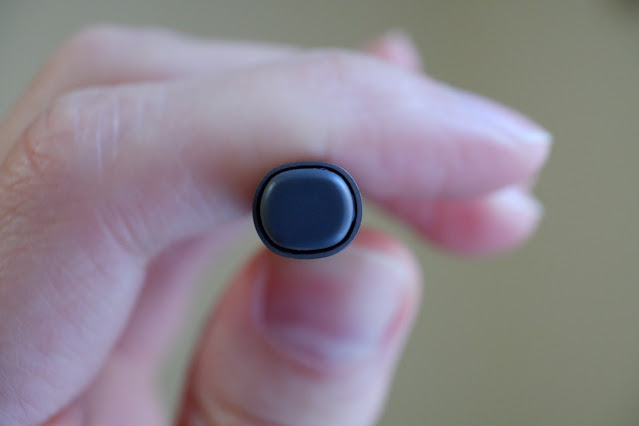 If you're coming from a garaged chromebook stylus like me, this is going to be worlds more comfortable to hold. If you're coming from a high end pen like a Rotring, maybe not. While the size of this pen is very comfortable, I found the rectangular profile a bit awkward. It wasn't a pain, even for fairly long note taking sessions, but my preference is for a round, triangular, or hexagonal body that seems to be more common in traditional writing instruments. I would assume this rectangular shape makes it easier for Penoval to fit in the battery and other components.

This stylus almost completely does away with the pre-press required to use cheaper styli I have tried, making for a much more natural writing experience. There is some sideways wobble if you're writing at an especially sharp angle, but it didn't affect my use.
The headlining feature of this stylus is the eraser, and it works superbly. I tested it in Squid, Nebo, Keep, Cursive, and Sketchbook - all immediately recognize it and treat it as the last used eraser tool. I did find that certain apps were a bit picky if the default tool wasn't selected. My note taking app of choice, Nebo, treats the eraser end the same as the pen end when the highlighter is selected, but works as intended with the pen tool I use far more frequently. I think this feature could be especially useful if you let kids use your Chrome device for drawing, as most are familiar with an eraser from a young age.
I do think there's some opportunity to extend this feature further outside of note taking and drawing apps. Seeing it work as a right click in the browser, a middle click to open links in a new tab, or a rotate/pan tool in 3d viewer apps would be neat. I can't fault Penoval for this as I actually have no idea who is responsible for building on this feature. Would this have to be added at the app developer level, into Chrome OS, with updates to the USI, or with a firmware update from Penoval?
Let me know in the comments if there's an app or specific behavior you have any questions about and I'll be sure to test it out for you. 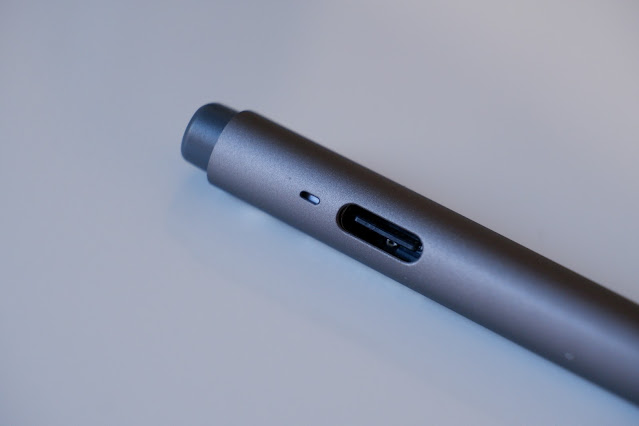 The stylus has a USB-C port near the tail end to charge the built in cell. Penoval rates the internal cell at 65mAh, which is about a third of the capacity an AAAA carries. That being said, it's a major convenience factor for me to be able to plug in the same charger my chromebook uses when it runs low instead of having to buy a new (and fairly uncommon) battery each time. As an added bonus, you can see the charge level in the Chrome OS dock when using the stylus. 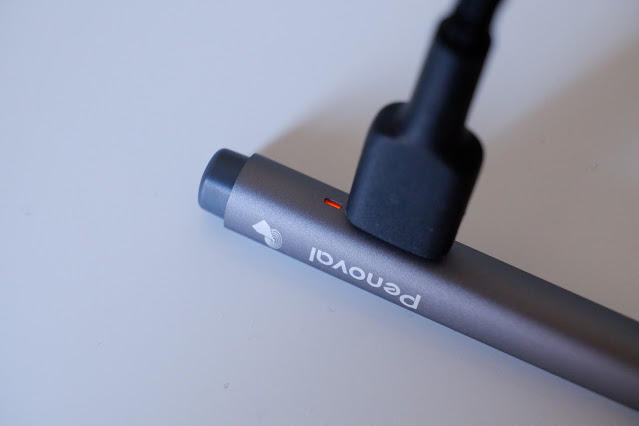 When the battery needs charging, any C-C cable and charger combo I tried worked without issue. You can use the stylus when it's charging, but the small battery charges quickly, so you likely won't have to.
In terms of environmental impact, I think the rechargeable cell is probably less damaging than repeatedly replacing alkaline batteries. While I wouldn't expect any differently for a product of this size, it's a bit of a shame that the cell is not user replaceable. I would like to at least see a way to remove the cell for safe disposal when the product reaches the end of it's life.
The packaging I received as small and almost entirely card stock, with just a small plastic insert to hold the stylus in place.

I am happy with this purchase overall, and would recommend it to anyone looking for a full sized stylus for their USI compatible device. The price is around $50 at the time of writing. While that's definitely pricey for a stylus, it's in line with the $35 to $90 range a quick search is showing me.
I would buy this if you...
I would not buy this if you...
If you want to pick one up for yourself, you can click my affiliate link below to help out the page:
Penoval USI702 on Amazon
While there are a handful of USI pens on the market, there is very little differentiation right now. HP has their own pen with USB-C, but it's more expensive and forgoes the eraser. This MoKo option includes an Alt and eraser button, cramming in more features for a few dollars less, but relies on replaceable batteries instead of a rechargeable.
If there's a different stylus you use and recommend, let me know below. Thanks for reading!
USB-C