RovyVon Aurora A8 U 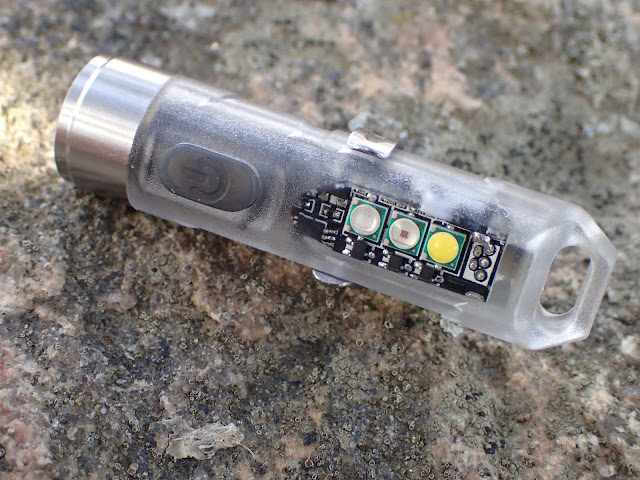 RovyVon is a fairly new brand, and they're making a big name for themselves with the tiny keychain lights in their Aurora series. There's almost too many lights making up this series, with a wide variety of interfaces, materials, colors, and LEDs available. Today I have the A8 U, which has a high CRI main emitter with a clear body and white, red, and UV side LEDs. It's also worth mentioning the extremely similar A8 Y, which replaces the UV LED with an amber colored one.

I'll admit that I initially didn't see the appeal of these lights, but after playing with it for a bit, I'm convinced. These are a ton of fun, cramming way more power and features than I would expect into something of this size. The momentary mode is perfect for a light designed to be kept on a keychain and, as finicky as the UI can be, it's great for making sure the light doesn't stay turned on in a pocket. As much as I usually don't find blinky or colored modes to be practical, the red beacon on this thing is great. Combined with the clip and the small size, it's easy to clip this onto a backpack as a secondary bike light or pedestrian light.
All that being said, it's not a perfect light. I have some concerns about the cell life in the long term (though these are mostly speculative) and wish there was a way to replace it. I also find the PWM on all but the highest mode to be pretty easily visible. 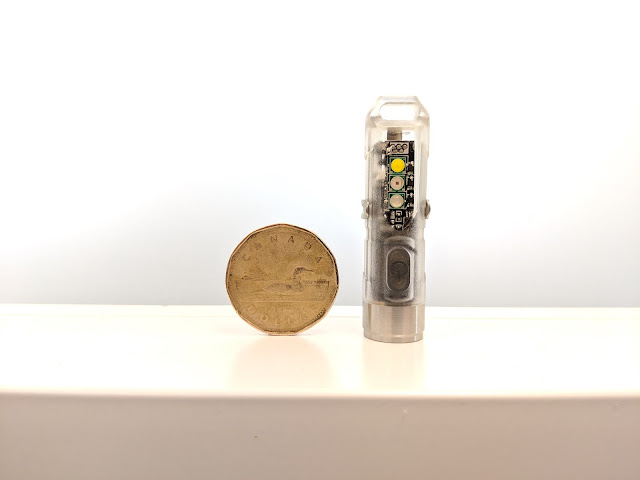 The light measures 55 mm long, 14.5 mm at the head, and 12.2 mm thick. Pictured next to a Loonie above, you can see it will easily disappear into any pocket. Even with the clip installed, it weighs a mere 14 grams. 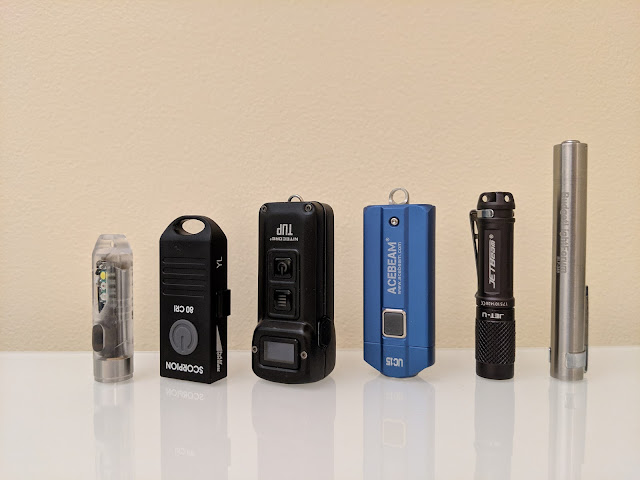 This is by far my smallest flashlight, but here it is compared to some of the rest. Left to right that's the YLP Scorpion X8, Nitecore TUP, Acebeam UC15, JetBeam Jet-u, and BLF-348. 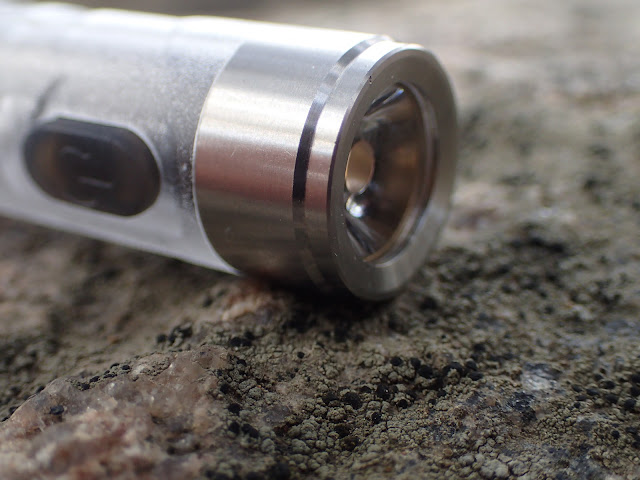 Surprisingly this light features a stainless steel bezel. I love to see this material used on keychain lights, since it's harder than most keys - that means it doesn't get beaten up too quickly like most aluminum lights. I'm not sure if the bezel is pressed or glued into place, but it's certainly not easily removable. 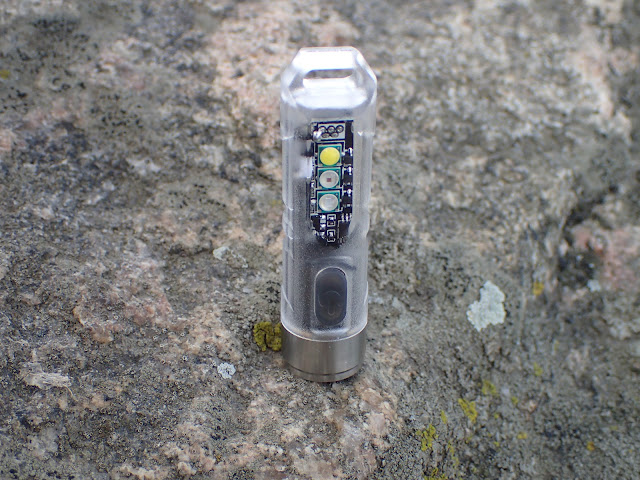 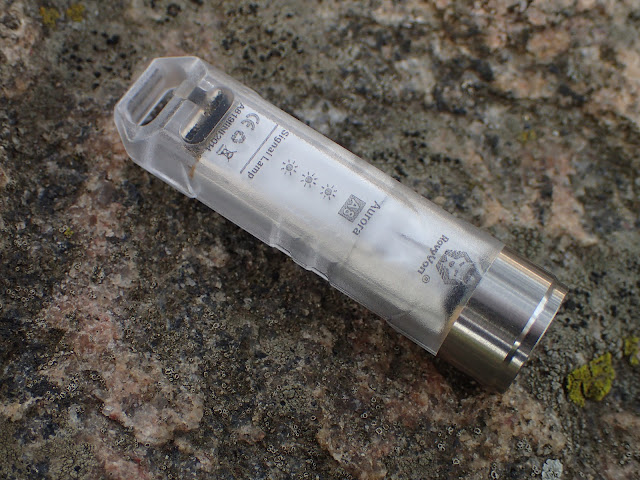 The body of the light is made of a clear polycarbonate, and brings back fond memories of old game consoles. The top side has a switch near the head, and a clear section showing the three side LEDs. The opposite side has some printing on it indicating the brand, model, and other information. Below that is the cover for the micro-USB charge port. I've had mine in a pocket with my keys for a few weeks now, and the plastic doesn't show any major wear as a result. 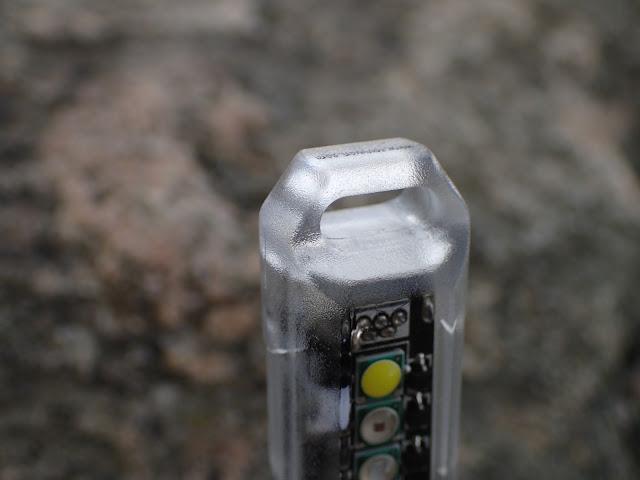 The tail has a loop in case you want to attach it to something, with the website printed on it. This light won't tail-stand, and obviously mechanical lockout isn't an option.

The light comes in a black and orange box with a window showing the light. Inside, it includes: 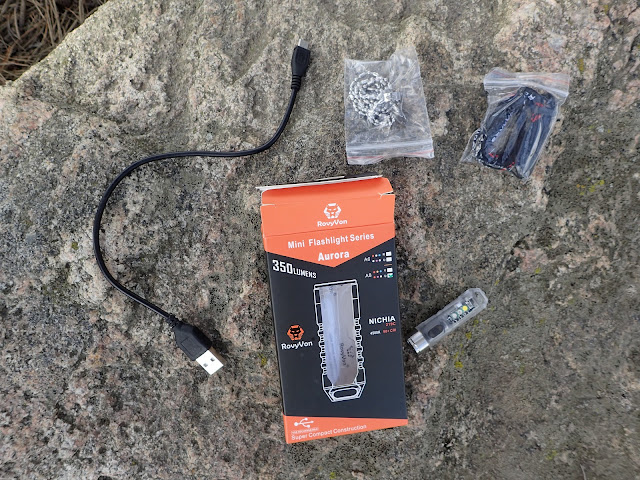 Just as an aside, I absolutely love these short little cables for travel and use with powerbanks - they pack up a lot nicer and, if I'm carrying multiples, I really only need one with any sort of reach. I recommend you pick up a few if you don't have any.

This light is tiny enough that ergonomics almost don't matter - but it fits fine between your thumb and fingers, and the switch has a good feel to it. Neither the form factor nor the battery life is meant for much more than that as a handheld. 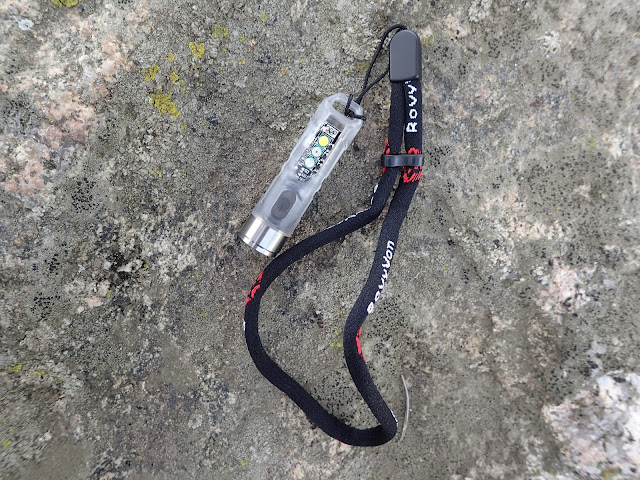 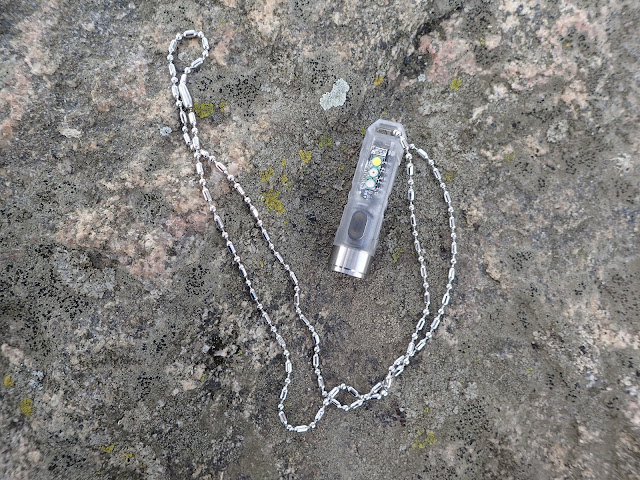 The loop on the back can be attached to a keychain, but RovyVon also includes a lanyard and a "necklace" you can slot through. The lanyard is almost laughably large compared to the light, but it works. The necklace is a bit too reminiscent of a bath chain for my liking, but it's functional and easy to swap out if you want something snazzier. 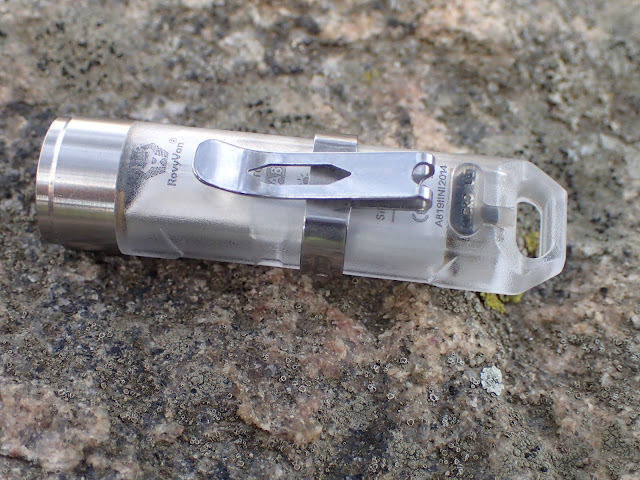 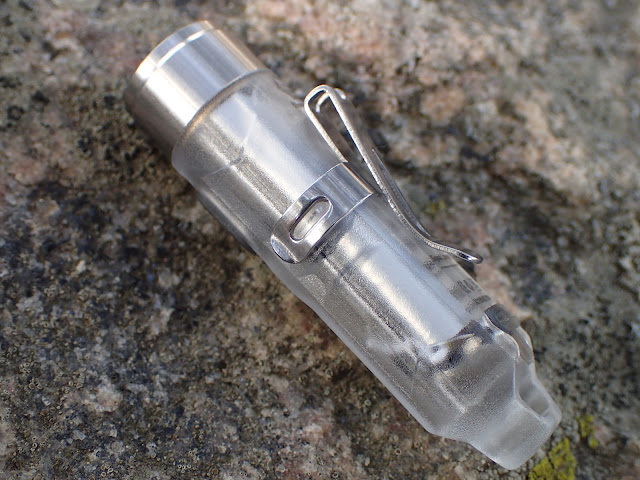 The clip is very short and doesn't carry especially deep, but it has a solid hold on both the light and whatever you clip it on to. I personally don't often clip lights this small to my pocket, but the reversible nature of this clip makes it great for clipping to a hat and using it as a headlamp. It can also be clipped to a jacket or bag when using the side emitters and blinking modes for a great locator beacon. 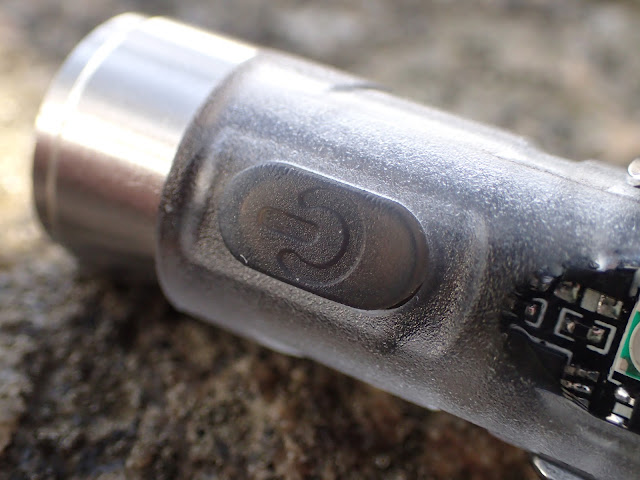 I'll preface this by saying a larger light with this UI would be awful - but a little backup keychain light like this is well suited to it, and it's very functional.

There's a lot going on here, but it's mostly very well laid out. It all seems to be designed so that a single click or a hold from off won't leave a light on in your pocket, and if it does somehow turn on, holding will turn it off from any mode. I find the beacon-like blinking pattern they chose much more useful than a strobe mode as well. 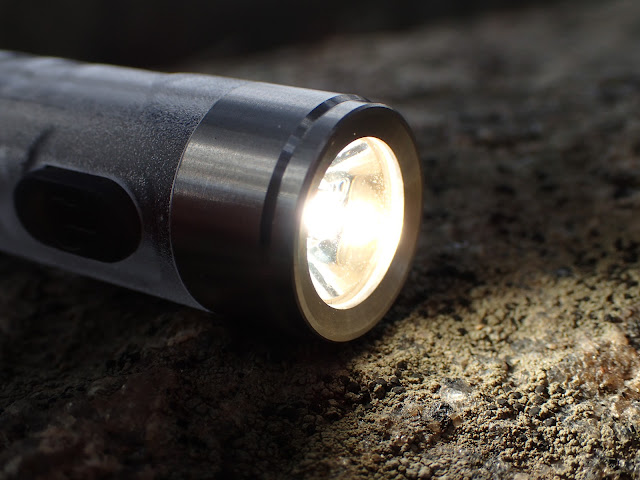 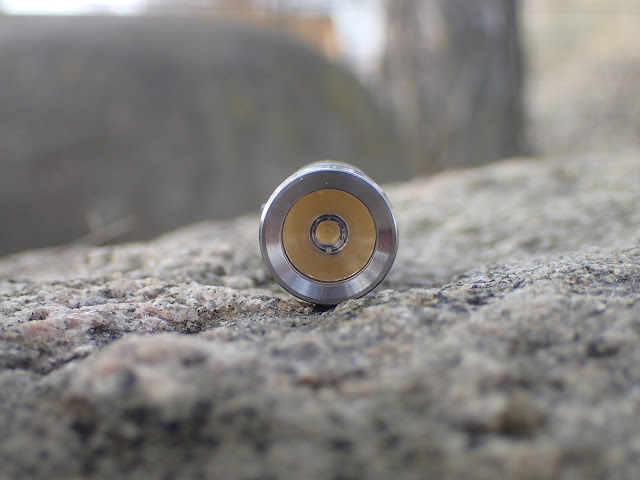 The main LED is a high CRI, neutral white 219C, easily one of my favorite emitters. The beam and color are great, but all modes except high have very noticeable PWM. It actually took me a while to pick up on this because I usually use the light in very short bursts and for stationary subjects, but it's quite annoying once you see it. 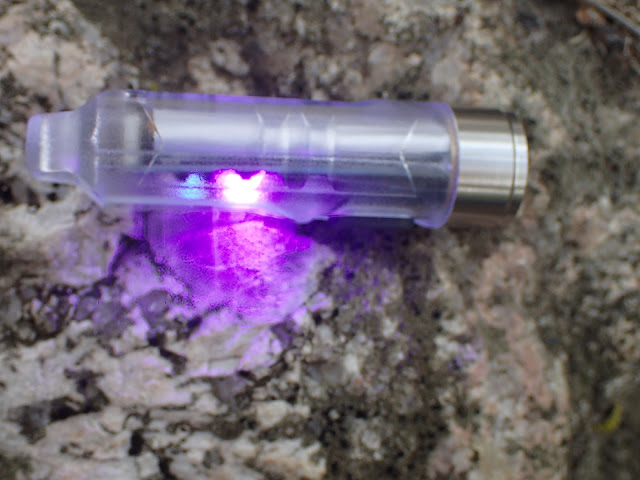 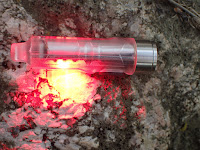 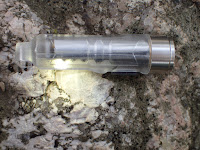 The side LEDs are fun, but the UV is quite purple, and doesn't seem all that powerful. This might be for the best, since it's pointed right at your face when you turn it on. The red is... well, red, and the white light is fine, though not as nice as the 219C used on the front. I can't actually imagine what purpose this white LED would serve that the front LED doesn't already, but maybe it will be useful for some - let me know what you might use it for.

The light is powered by an internal pouch cell, and is not user replaceable. Getting this much output out of a cell this small is sure to strain it over time, so we'll have to see how these hold up after a year or two.

I tested the highest two modes of the main LED. Both show output falling quickly for about 5 minutes, before trailing down with the voltage of the cell. Runtime was 35 minutes on high and 75 minutes on medium, both of which are reasonably close to what RovyVon writes on the box. 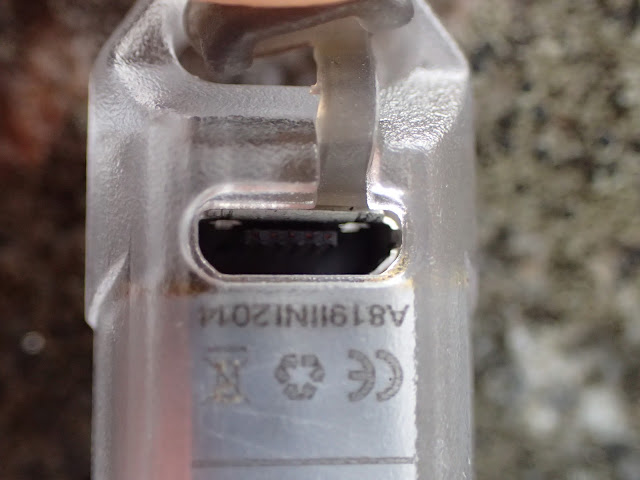 Charging is as easy as you'd expect - pull the port cover out and plug into a USB source.

The tests show the current stays well below 0.4 A - it's normal that a small cell like this should charge at a slower rate. The CC phase is pretty short, followed by a longer CV phase. On the second charge, I noticed that there was still current flowing into the light after the LED changed from red to blue, so I set up a timelapse camera to note the change on the third curve.
You can see that the current is still trailing off for a long time after the charge indicates it's complete. The rate is low enough that it won't affect the level of the cell too much - probably about 95% vs 100%. That being said, there doesn't seem to be any proper termination. I can't say for sure, since I can't get at the cells and measure their actual voltage, but initial impression is that the charge may be trickling. If the power draw were just from the indicator LED, I would expect the curve to level out eventually.

This product was provided free of charge from Best Light. I was not paid to write this review, and have tried to be as unbiased as possible.
RovyVon A8 product page at Best Light
Zeroair's review of the A8 Y, the same light with an amber side emitter
Manufacturer's product page
Flashlight High CRI Integrated charging Micro USB Nichia 219C Red light Rovyvon UV light