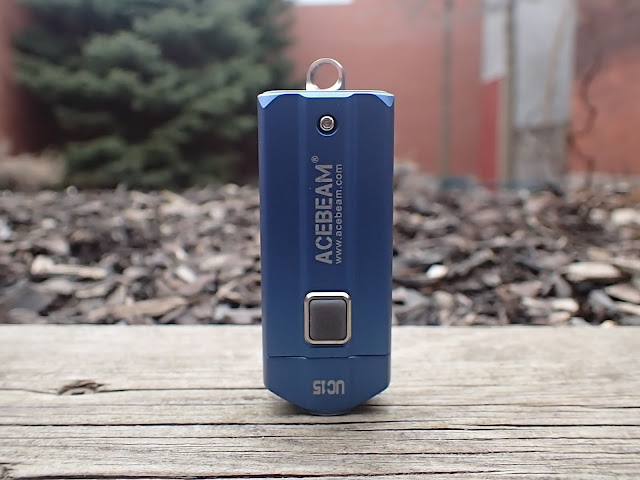 Acebeam's UC15 is a very interesting keychain light. While most lights with this form factor run off of built in cells, this one uses two user replaceable AAA or 10440 cells instead. Secondary UV and red LEDs are also included.
The UC15 I tested out is blue, but it's also available with clear, red, or black anodization. The light is also available with a high CRI Nichia LED in place of the Cree used on my sample.

This is one of the only rectangular keychain lights that runs on standard replaceable cells, and also one of the only ones that gets anywhere close to 1000 lumens. Throw in the UV and red auxiliary modes, and it's quite a compelling package.
The UI and clip both leave a bit to be desired, but the features mean that almost no other light on the market can compare.

The light measures 27.8 mm wide, 14.7 mm thick, and 73.1 mm long. I've included the lug at the tail in that length measurement, since it's not made to be removed, which means the length I measured is much longer than Acebeam's claim. 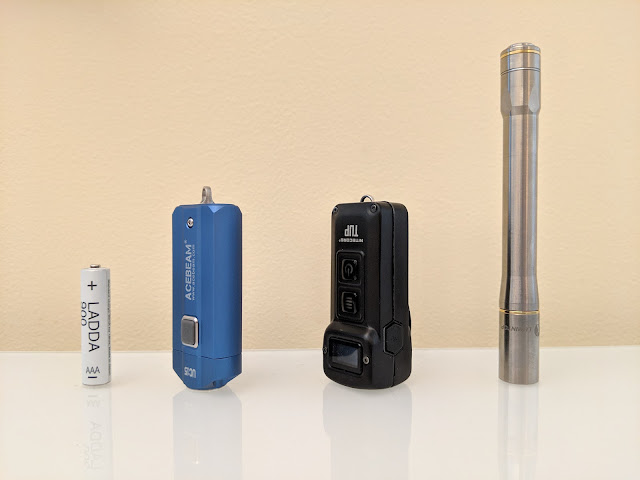 Here's the light next to an AAA battery, the Nitecore TUP (another 1000 lumen keychain light), and the Lumintop IYP365 Ti (another 2xAAA light). 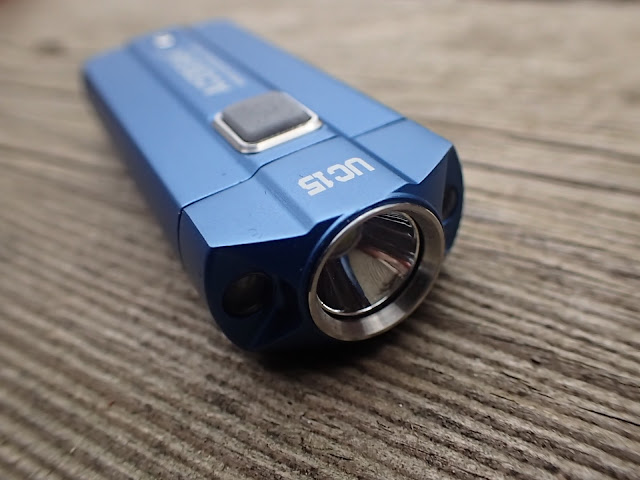 The front of the light has a stainless steel bezel protecting the main emitter, while the red and UV LEDs flanking it are covered with small glass inserts. It's an interesting look, and I like that the secondaries aren't bare. 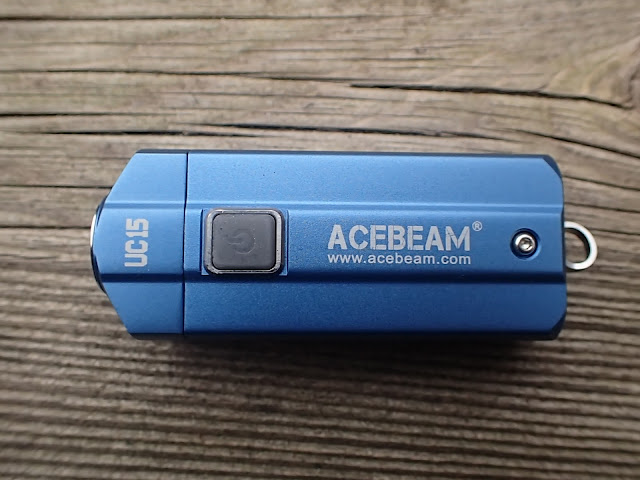 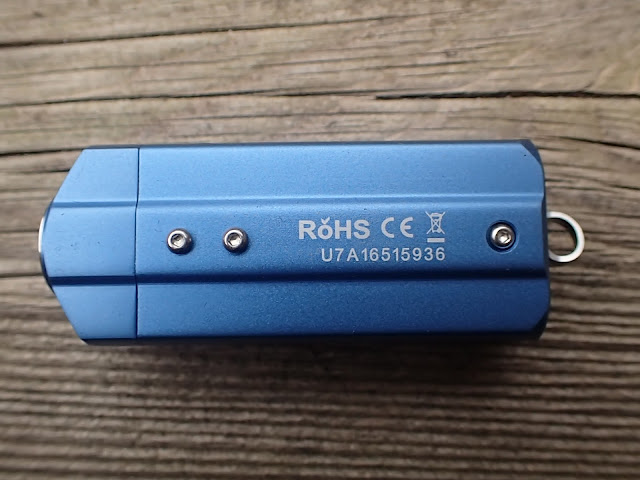 The top and the bottom of the light are nearly identical. Here we can see that the head is a separate piece from the body, but it's not easily removable. The top has a back-lit switch, and the bottom has two screws for the clip. 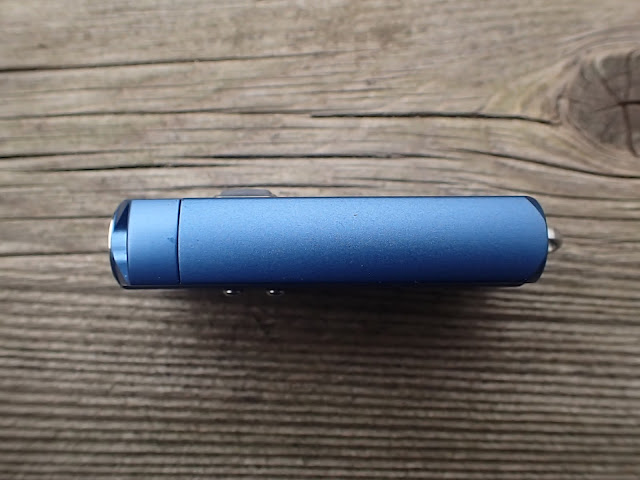 The sides are slightly rounded and smooth - there's no knurling or other grippy sections of this light. 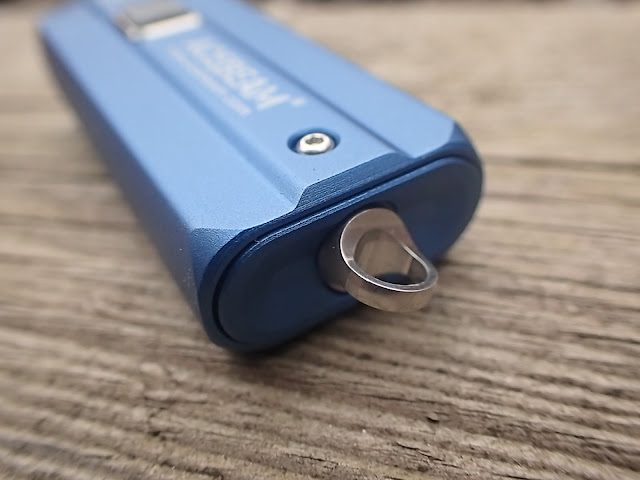 The tail is interesting - it's concave in the middle, and slides into the rear of the body instead of sitting on top of it. The lug in the center is used to remove the tail and change cells, but it's not removable. 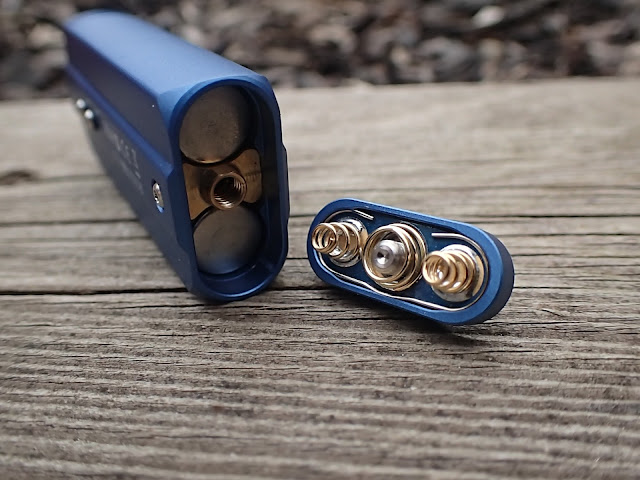 The lug on the tail is captive. The good side of this is that you won't loose it, but the downside is that if you're not putting this light on a keychain then there's no easy way to remove it and allow the light to tailstand. There are two springs for the negative contacts, and the current is passed to the brass section in the middle. This means there is no mechanical lockout possible. 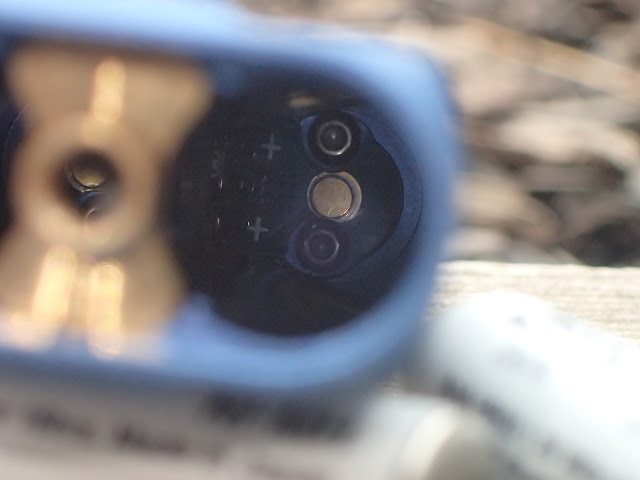 At the head of the light, you can see the small brass buttons that serve as the positive contacts. The screws seem to be a form of reverse polarity protection.

The light comes in a black box with a hang tag and a window showing the light. Inside, it includes: 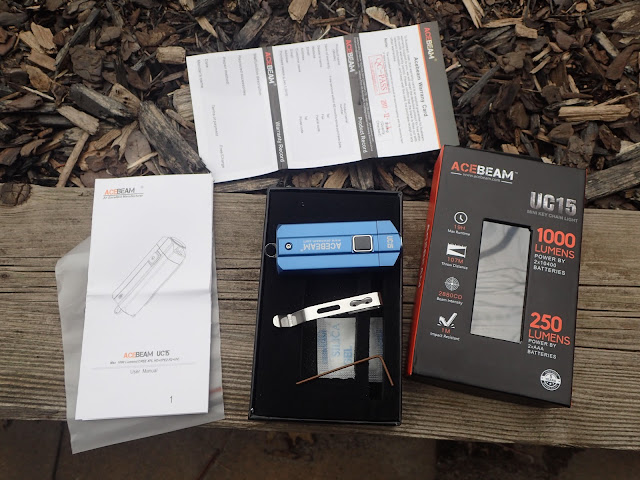 The light itself doesn't have great ergonomics, but that's mostly due to the small size. I do find that the button itself is a bit stubborn, and difficult to click, especially with gloves - as I did on the Acebeam H40, which seems to use the same switch.
The tail lug has a large loop on it, designed for use with a keychain. There's no lanyard included, but one could easily be threaded through here if you wanted. 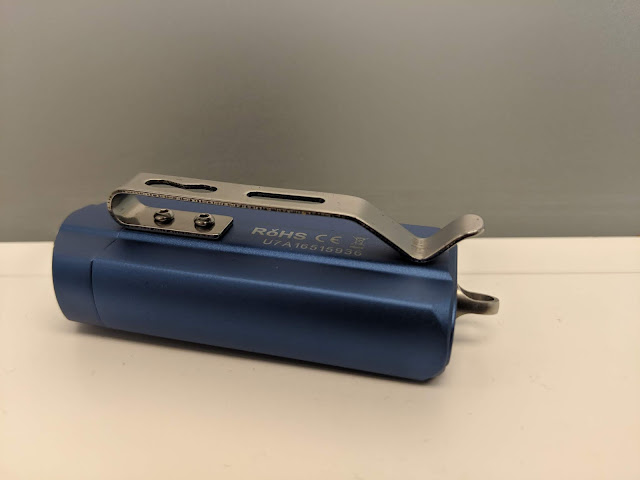 The clip that's included is a bit interesting. The shape is good, but the clip itself is enormous in relation to the light. It sticks beyond the bottom of the light when attached, and almost doubles the thickness. I do appreciate that the hex key was included, but I think this could have been done a bit better. The screws included are shorter than the clip sits off the body, so installation is a bit finnicky - I found it easiest to place the screws through the holes with tweezers before screwing them into the light. 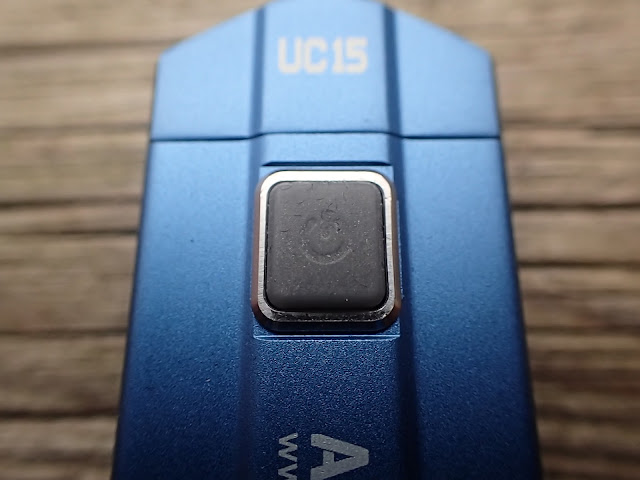 The basic interface is as follows:


This UI is alright, but I found it annoying to need to double tap to change brightness level of the main LED, especially since I don't find the switch terribly responsive. When powered by AAA cells, Acebeam claims brightness levels of 250, 82, and 10 lumens for the main LED. Since this is a smaller EDC light, I wouldn't mind a lower low mode. 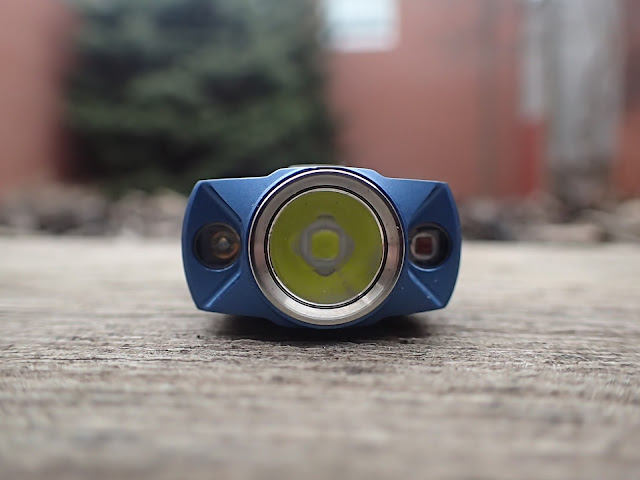 Acebeam actually lists all three LEDs used in this light - a cool white XP-L HD, a red XP-E2, and a UV Nichia 276A. All of the emitters work as expected. The XP-L isn't my favorite LED, but it puts out an impressive amount of light for something this small. The two AUX colors are pretty strong, and fun to have - though I don't find myself using them all that much day to day. If you're someone that regularly needs to check IDs or look for counterfeit money, this add on could be useful for sure.

Runtime was measured on turbo, high, and red modes with two Ikea Ladda NiMH cells. The runtime on the highest setting was 77 minutes, exceeding the 66 minutes Acebeam claims. On the next brightest mode, I measured 118 minutes, which is drastically shorter than the 222 that Acebeam states.
I also tested the red LED, and measured runtime at 152 minutes, which far exceeds the claimed 96 minutes, so the manufacturer claims are a bit all over the place here.
Testing with a benchtop power supply shows LVP around 0.9 V for NiMH. The light can run on a single cell, since the cells are in parallel.

This product was provided free of charge from Best Light. I was not paid to write this review, and have tried to be as unbiased as possible.
Acebeam UC15 product page at Best Light
Zeroair's review of the UC15
Manufacturer's product page