Today I’m taking a look at the EC4GTS that was sent to me by Nitecore. This is the newest light of their EC4 series, which all use two 18650 cells in a side by side arrangement. There are a few other offerings from competitors that have used this form factor, but it’s a relatively unique configuration and one that I’ve wanted to try out for quite some time. This particular model has an XHP35 HD set into a smooth reflector, and is controlled with two electronic side switches. 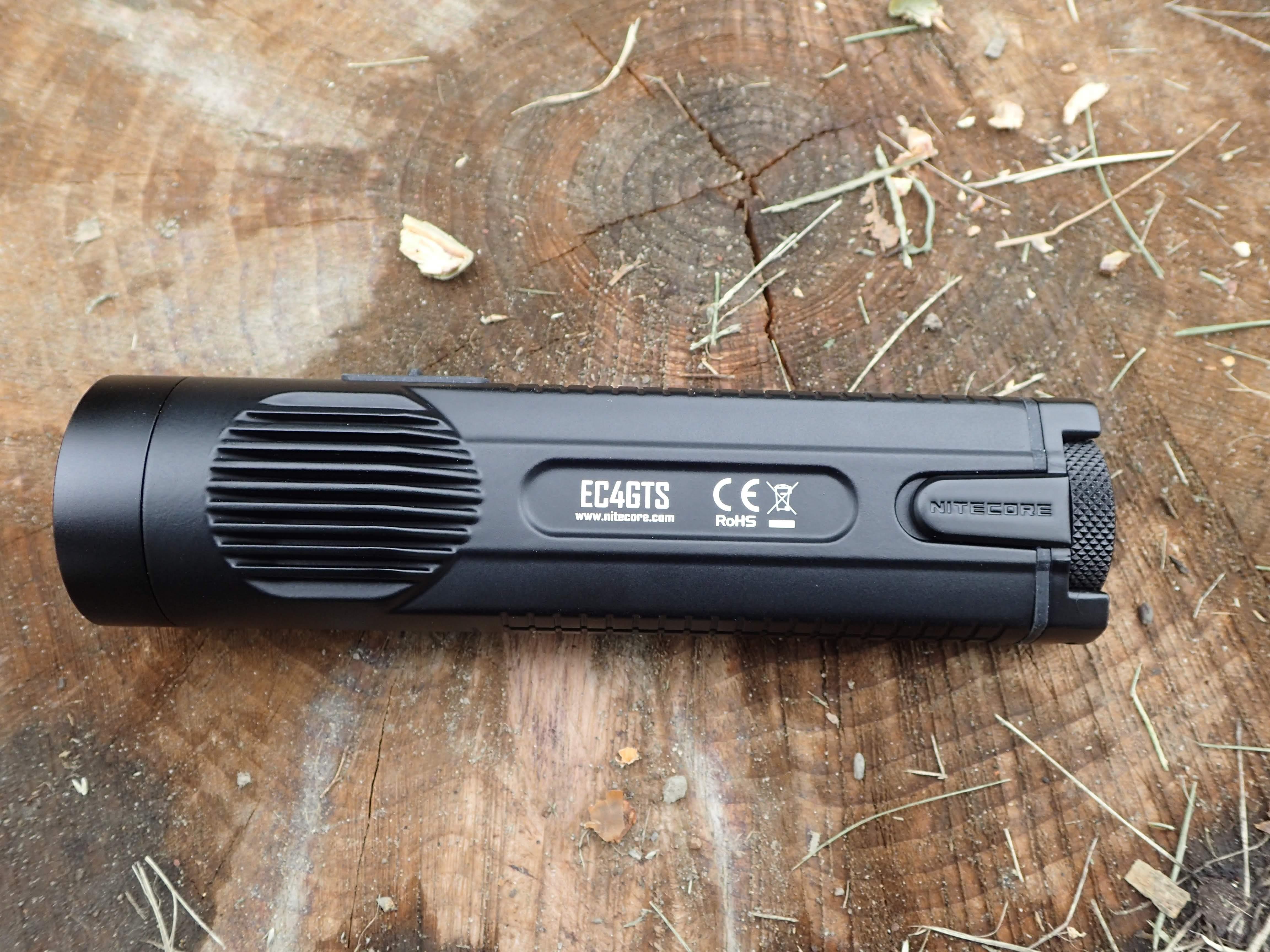 I’ve already said that this is a form factor I’ve wanted to get my hands on for some time, and I’m happy to finally have one. It’s a bit larger than I expected, but any light with this much capacity isn’t going to be tiny. The UI is good, the runtimes are great, and it fits into a jacket pocket quite well. I like this light a lot, and I really like having a light in my collection with such a unique form factor.

When this light was announced, a lot of people were griping about the EC4GTS having less throw than the EC4GT. It’s a valid observation, but it’s important to note that having less throw doesn’t make this a worse light than it’s predecessor. There are now 5 models in Nitecore’s EC4 series, not to mention the similarly shaped SRT9. I put together the chart below to compare the models in this series by output and throw specs. 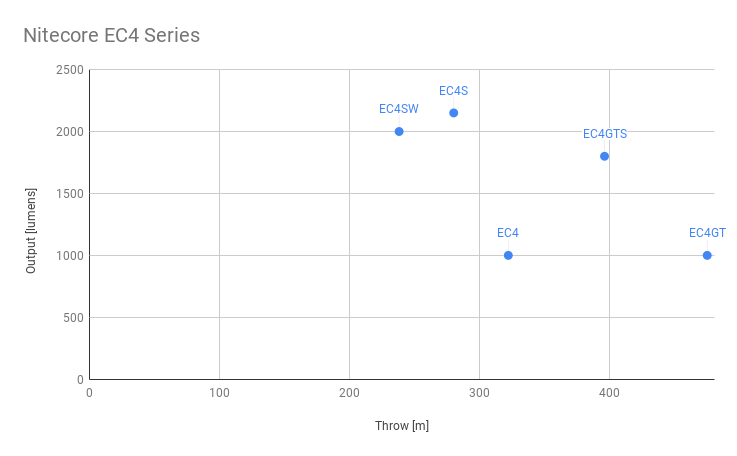 Starting at the head of the light, there’s a very deep reflector protected by a smooth bezel. The two sides of the head are covered in deep cooling fins behind the reflector. 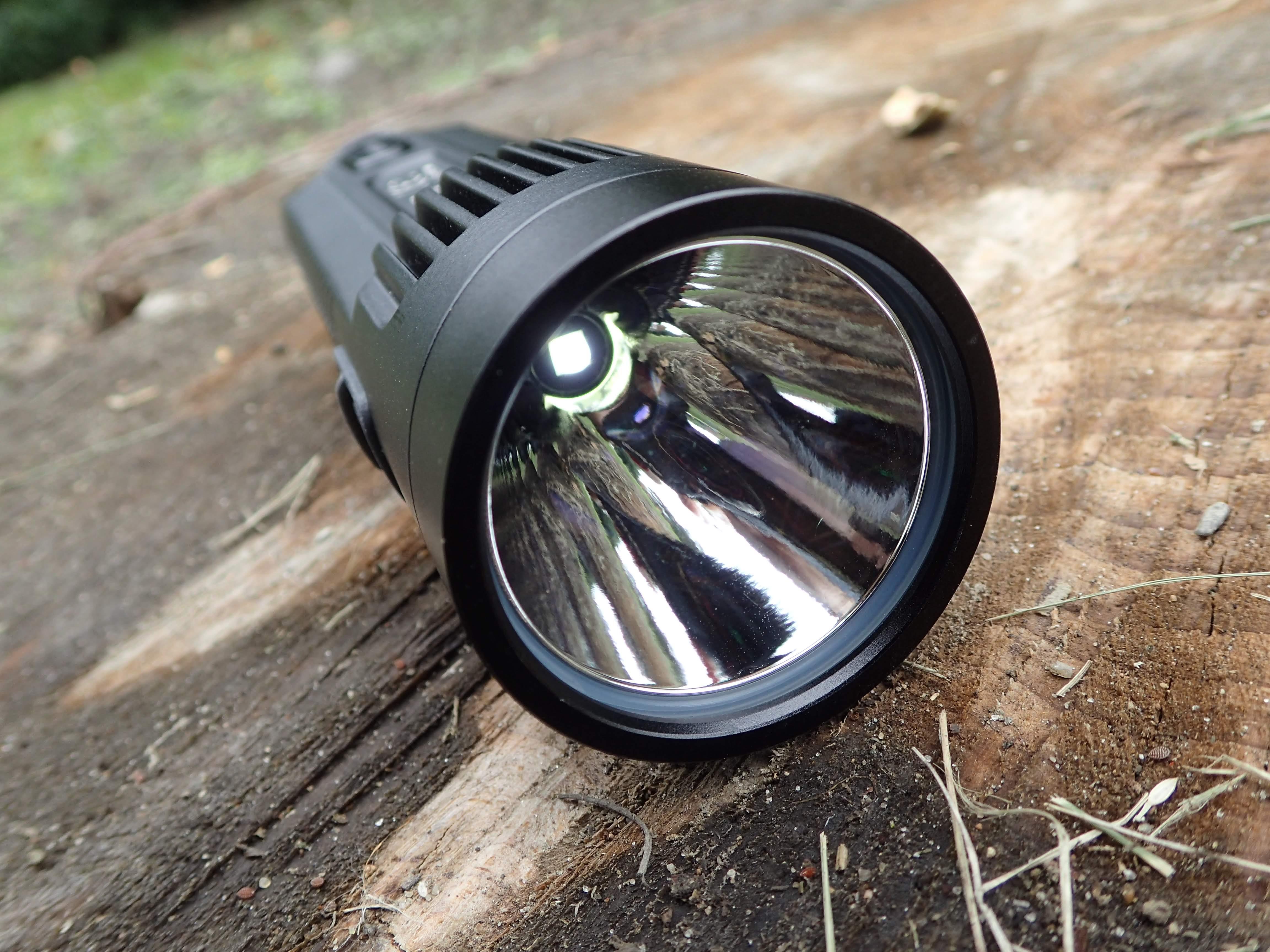 Flanking the fins, one side of the light is bare except for a serial number. The opposite side has the two backlit switches. 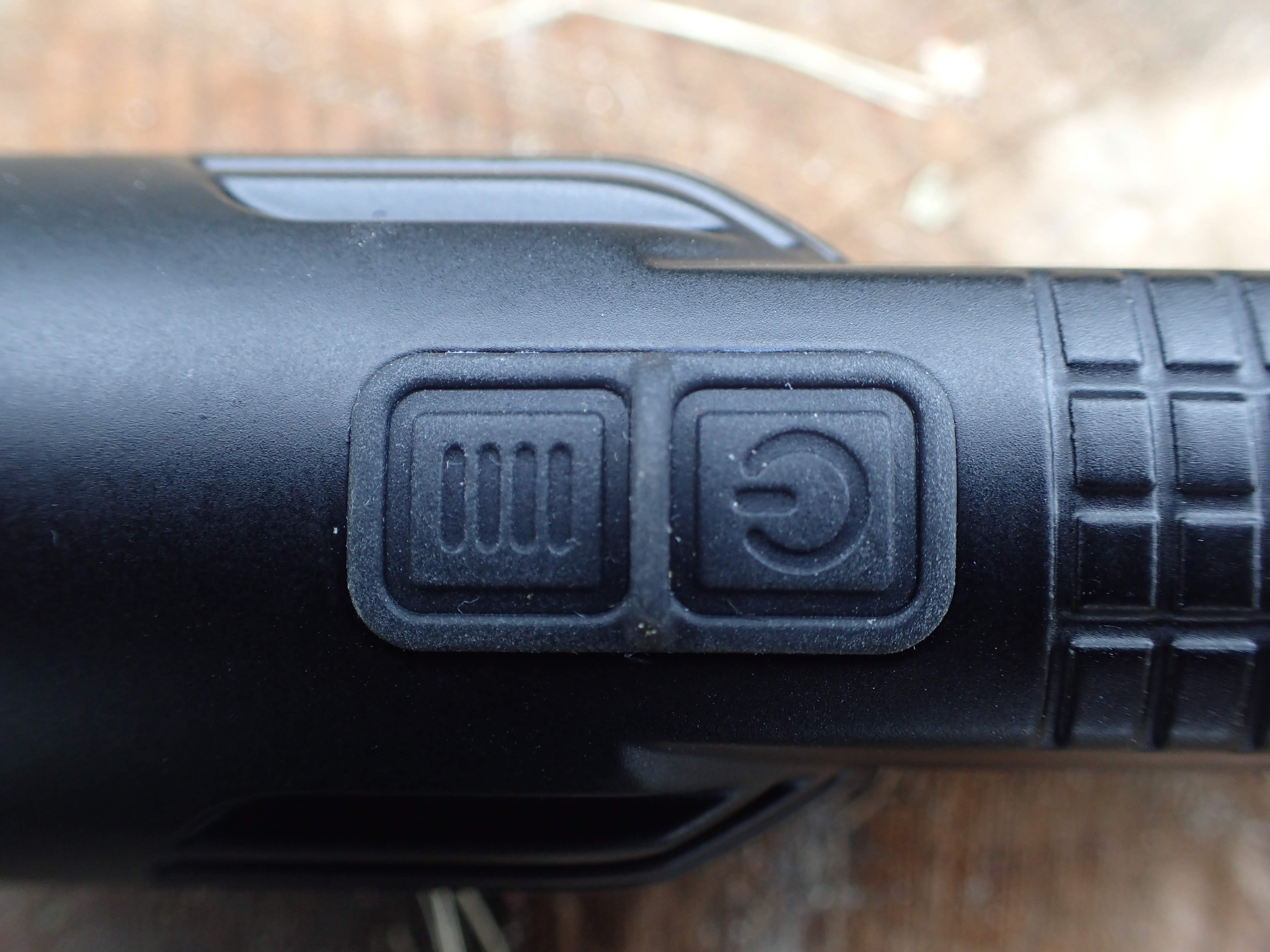 The body of the light is pretty nondescript - There’s some blocking on the two edges, but no knurling or other textures added. There are two long grooves along each of the flat sides of the light that provide a natural place for your fingers to rest while holding it. One side of the light has the product name and some brief labeling, which is the only printed text on the light aside from the serial number. The other side of the body is bare. I have to say, I really appreciate this design, and I’m glad Nitecore didn’t try to cram every empty space with a bunch of text like some other brands have been known to. 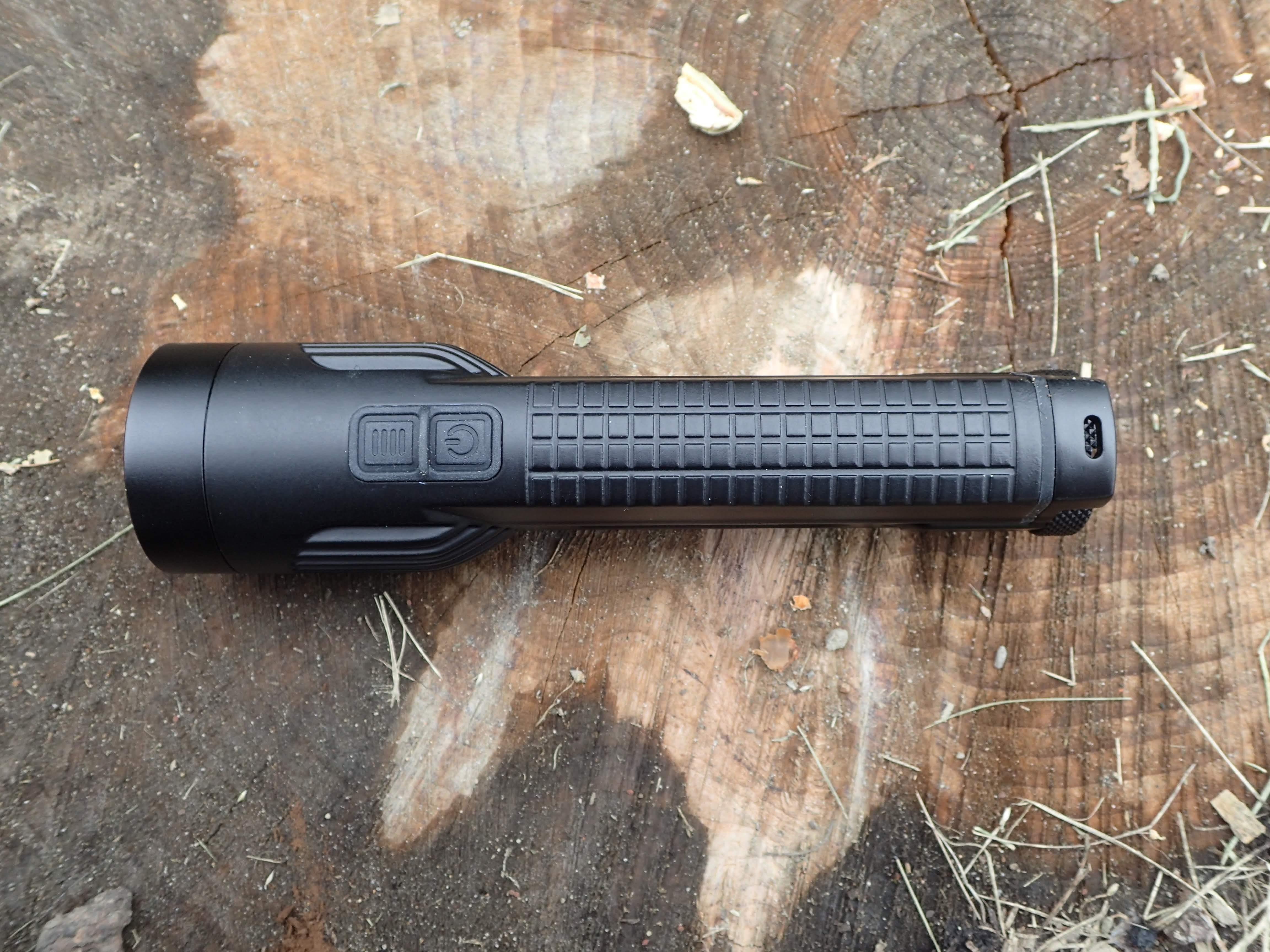 The tailcap has two long ears that notch loosely into the body of the light to help align it properly during installation. It’s held in place by a large thumb screw with angled knurling along it’s outer face, providing more than enough grip. There’s a hole in the screw that’s threaded with standard tripod threads. I’m not sure that this is the most convenient space for a tripod mounting hole, but I can see it being useful when coupled with a flexible tripod like a Gorilla-pod. Since the threads are standard, there’s a variety of other third party accessories that could be threaded into this hole as well. The sides of the tailcap both have single holes that can be used to attach a lanyard. The large flat area on the tailcap mean the light will tail stand quite well, although the design of the lanyard holes will prevent tailstanding when thicker lanyards are installed. 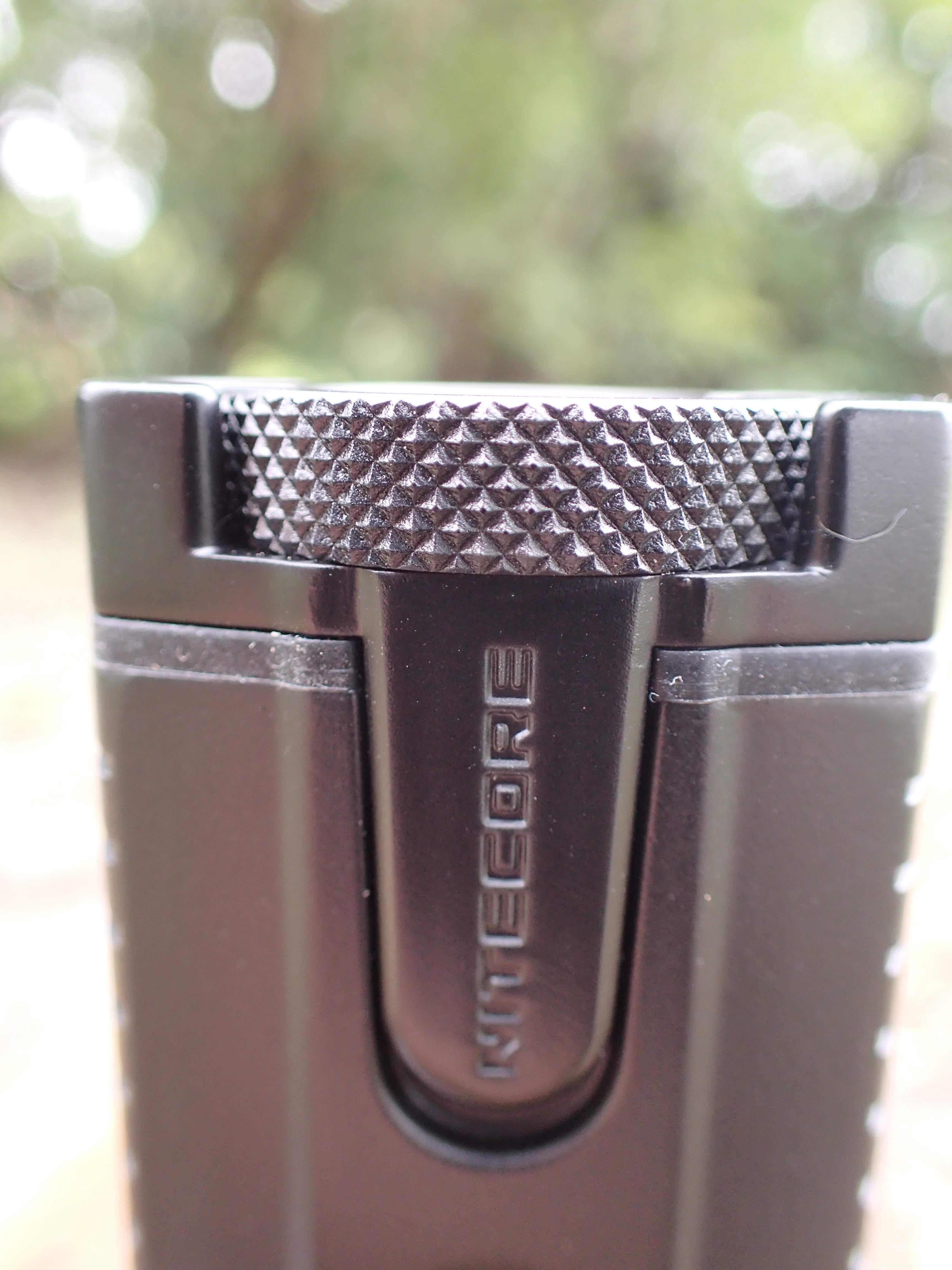 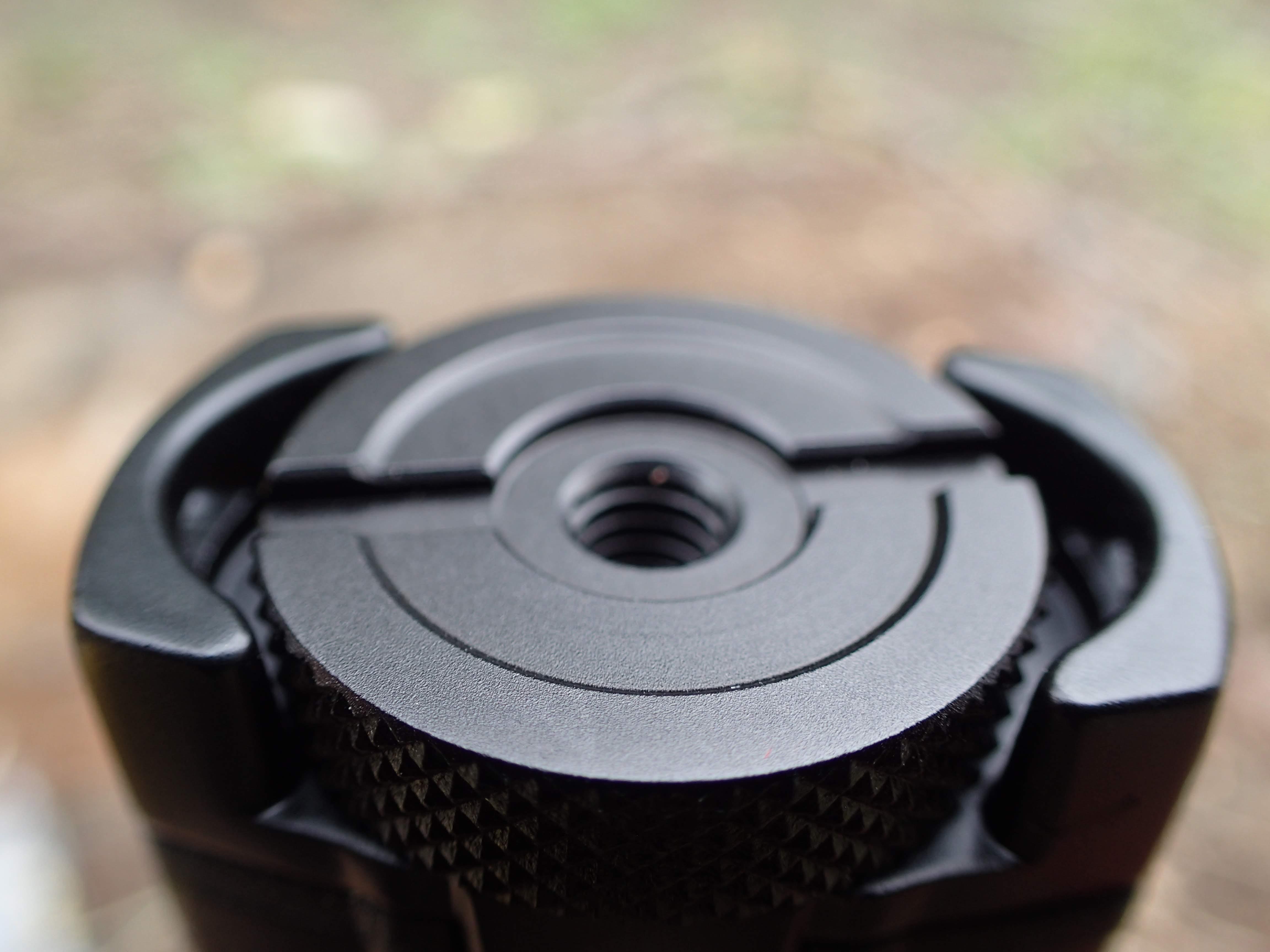 Inside, we can see that each cell gets a double spring on the negative terminal and a contact button, with physical polarity protection, on the positive terminal. There’s a sticker inside the tube indicating the proper cell polarity. This sticker indicates that the light will take either 2 18650 cells or 4 CR123 cells, although both the manual and the product page specify that only 18650 cells are supported. The cell orientation in this light means that physical lockout is not possible. 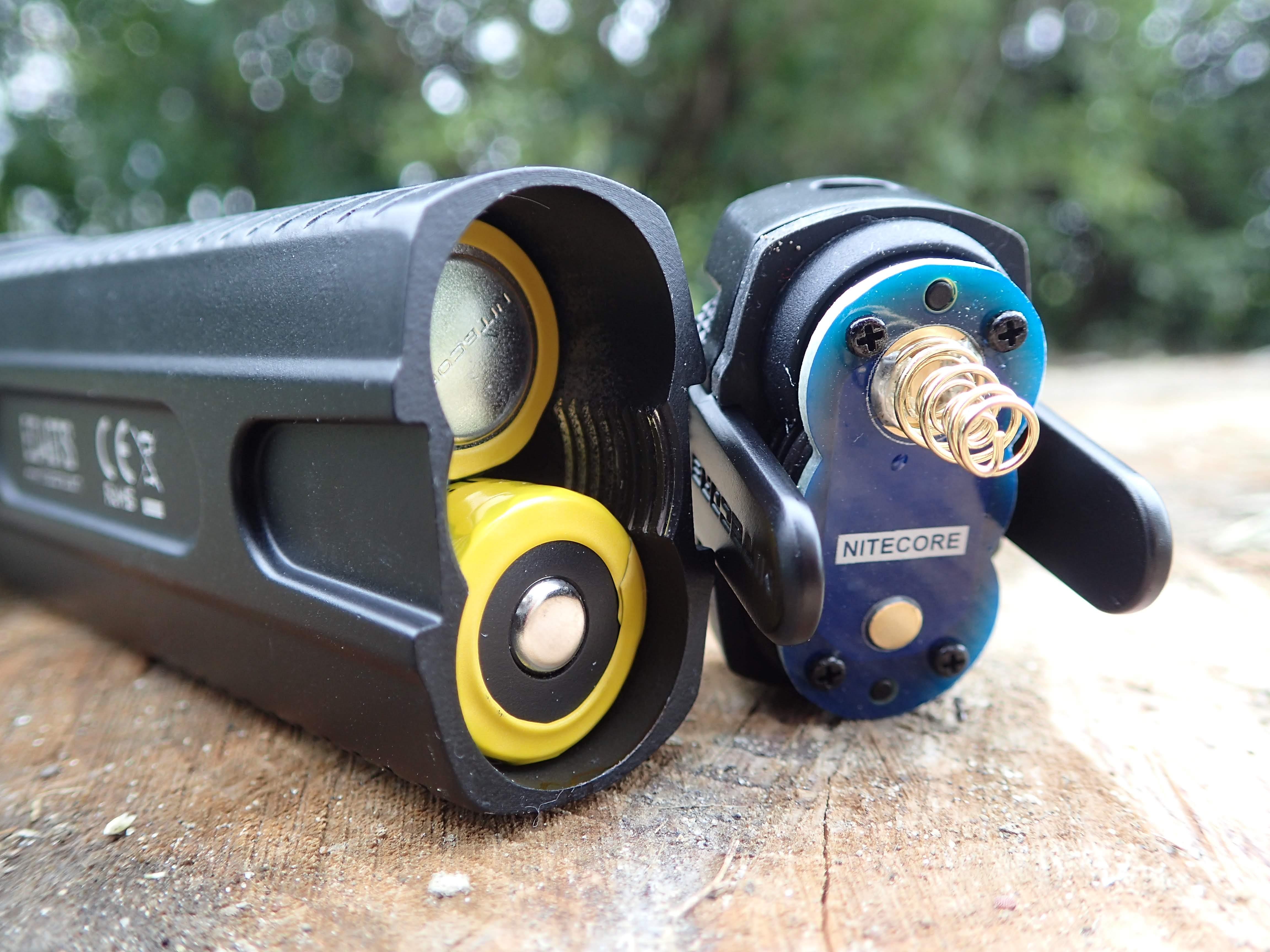 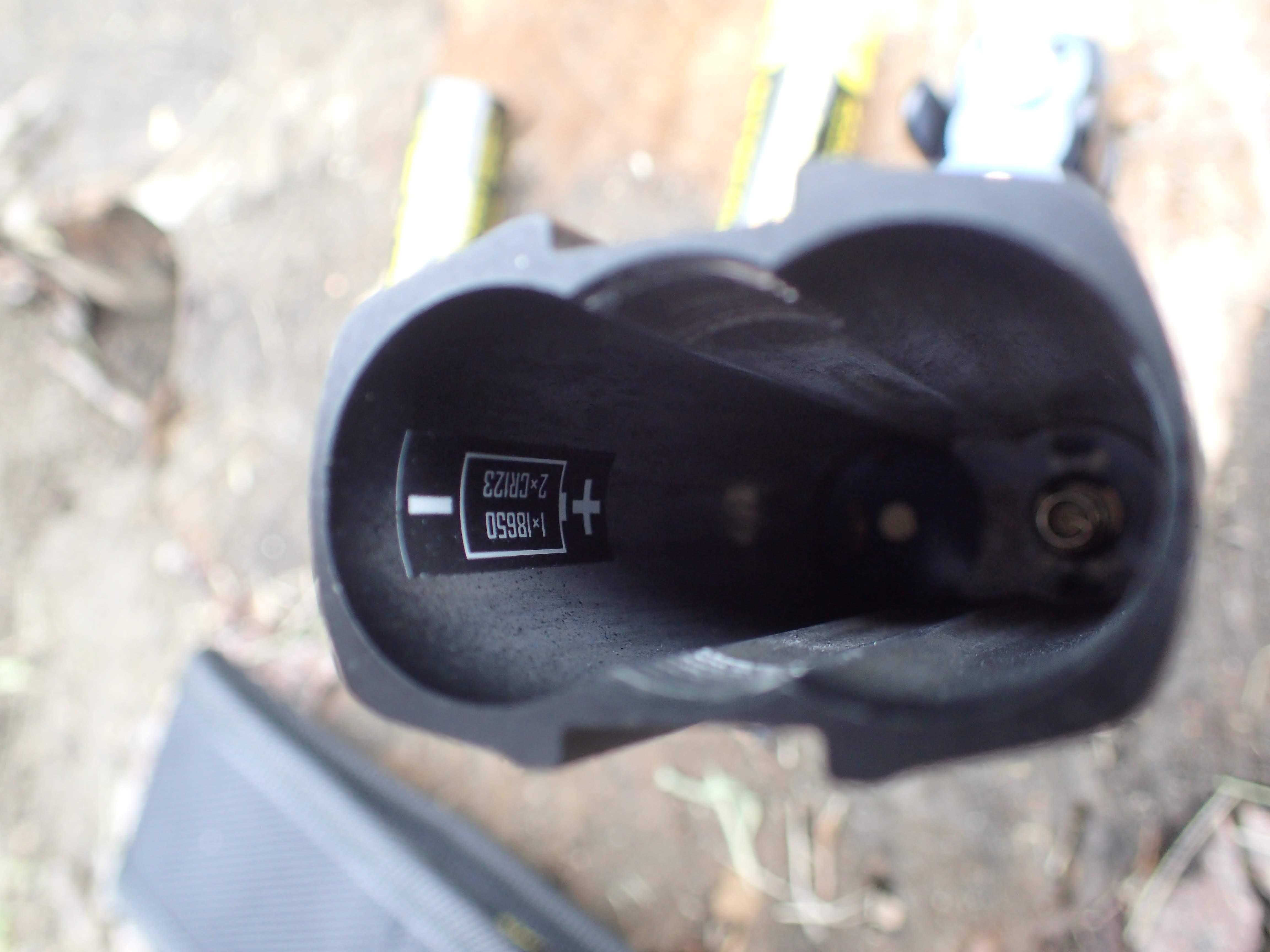 This light comes shipped in Nitecore’s standard packaging, a black and yellow card box. In addition to the light, this box contains a lanyard and a sheath. 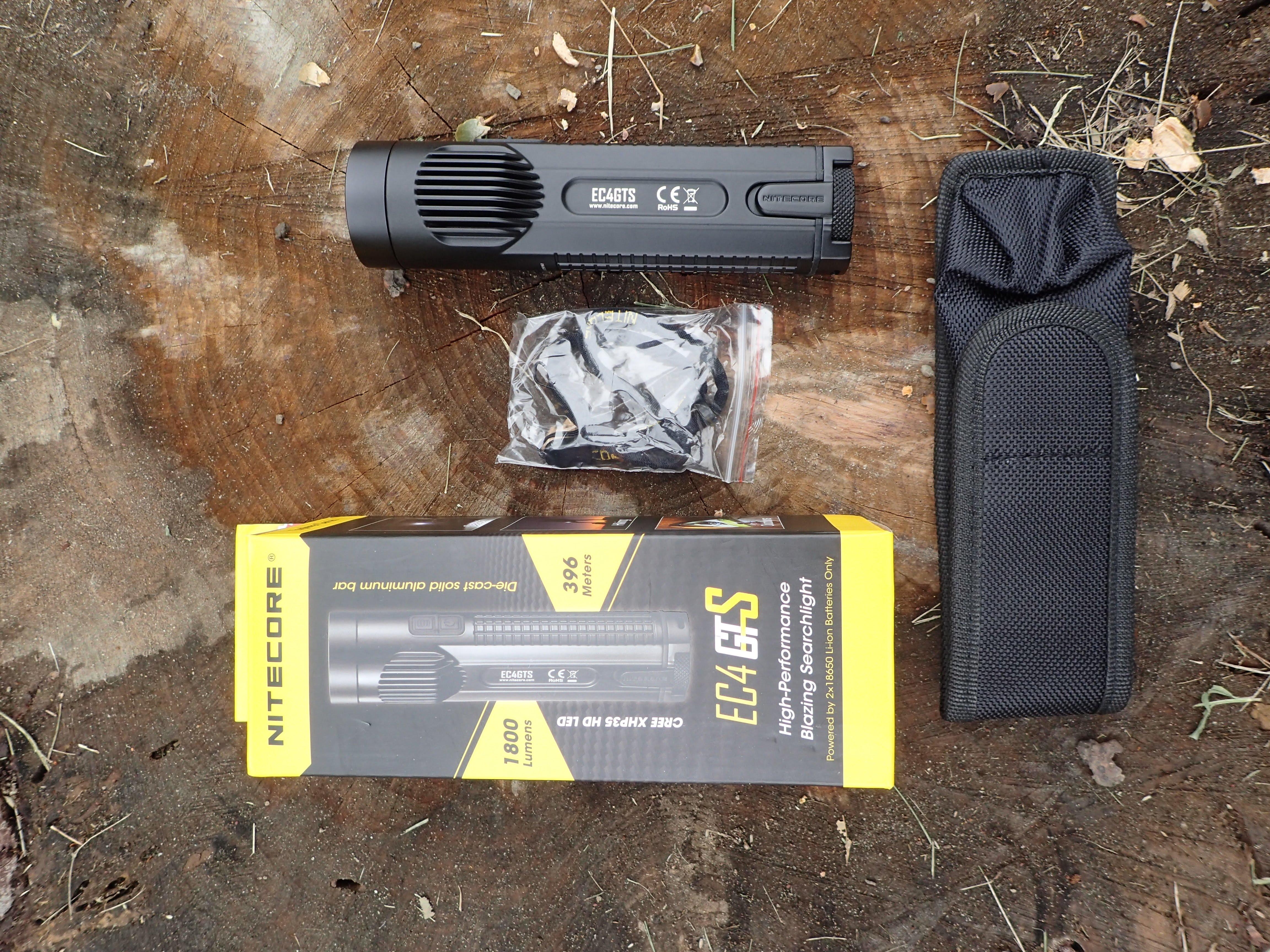 The flat shape of this light fits in a hand really well. Even though there’s not much knurling along the body, I found it quite solid and never felt like it was going to slide out of my grip. 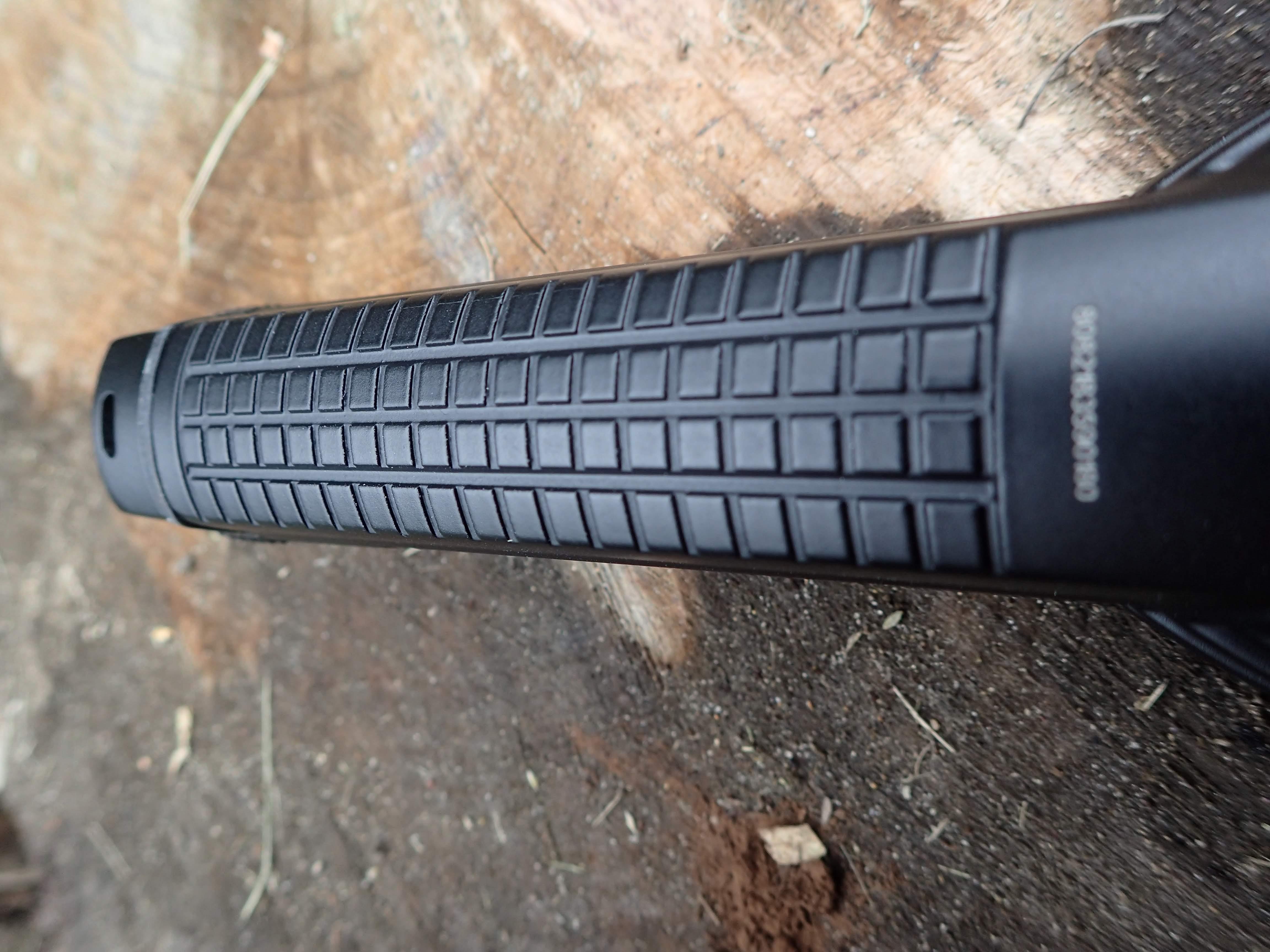 As far as retention goes, the tailcap has two lanyard holes and a tripod threaded hole. 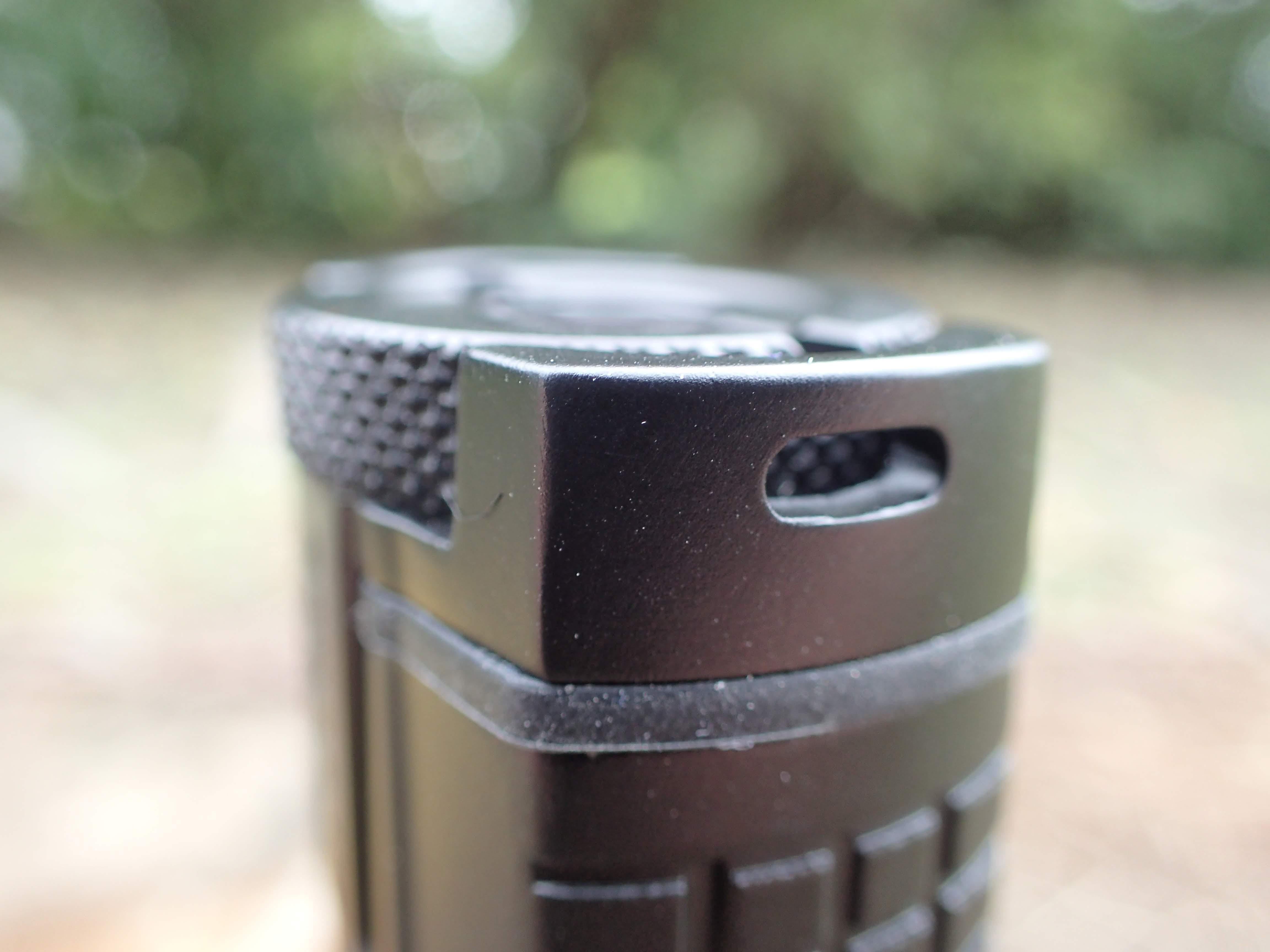 The included sheath will hold the light either bezel up or bezel down. The flap secures the light with a velcro closure. On the back of the sheath there’s one fixed belt loop, one velcro belt loop, and a plastic D-ring. 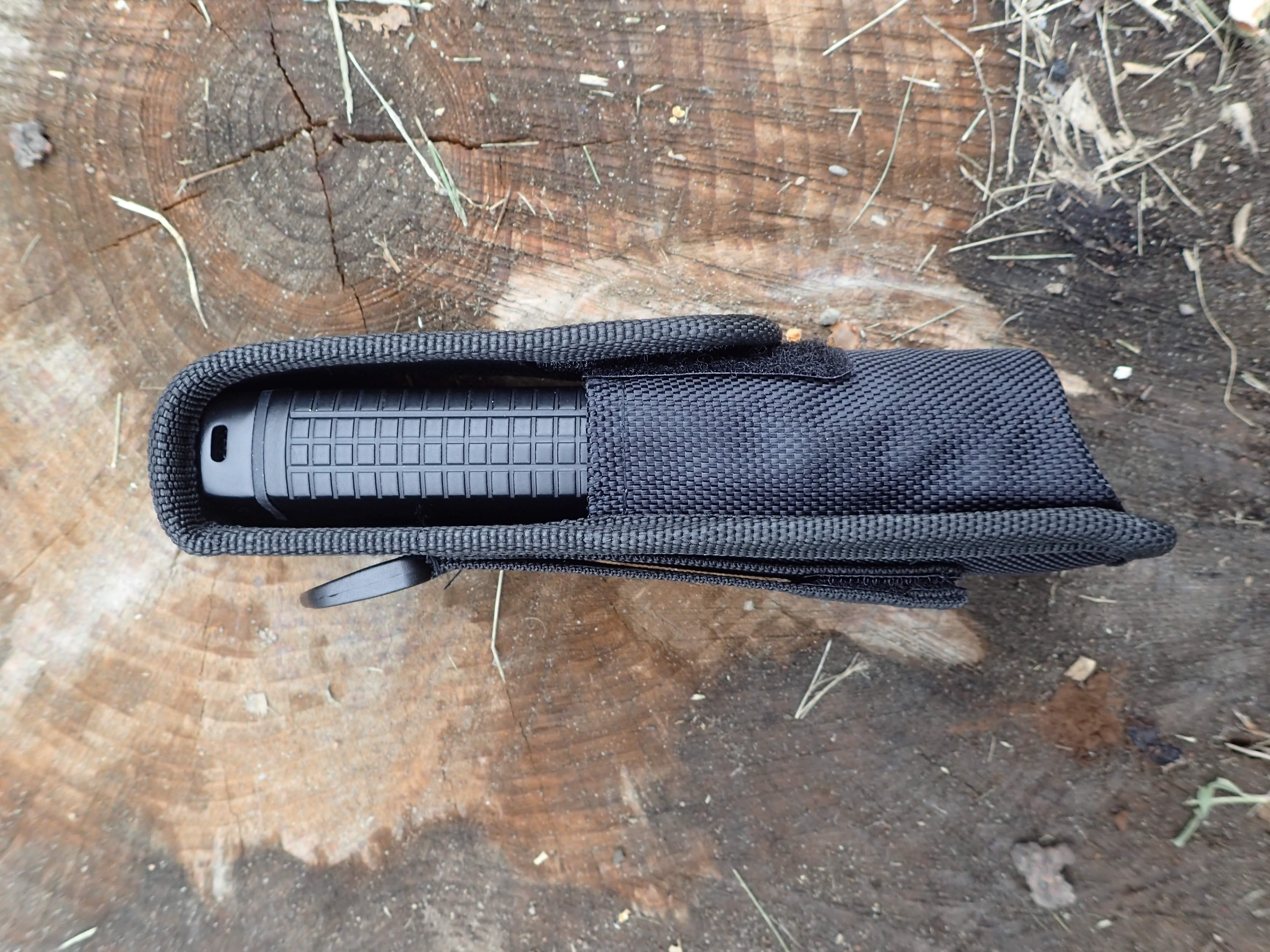 This light has 5 output levels, ranging from 1 to 1800 lumens. Basic operation is dead simple - pressing the power switch will always turn the light on to the last used mode, and another tap turns it off. The mode switch cycles through the modes from low to high when the light is on. More advanced operations are as follows:

The XHP35 HD used in this light is cool white. Nitecore claims a maximum output of 1800 lumens from this LED. This emitter is not as large as the XHP50 or XHP70, which means the light is still reasonably throwy when coupled with the large smooth reflector. The spot of the beam is a great, pure white. The corona and spill show a bit of tint shift, but I didn’t find this distracting in real use. Even though this is a throwier light, I find it comfortable enough for general hiking use as well. I don’t think this beam would be best suited for close up tasks, but there are quite a few diffusers available if you’d like to extend its functionality. 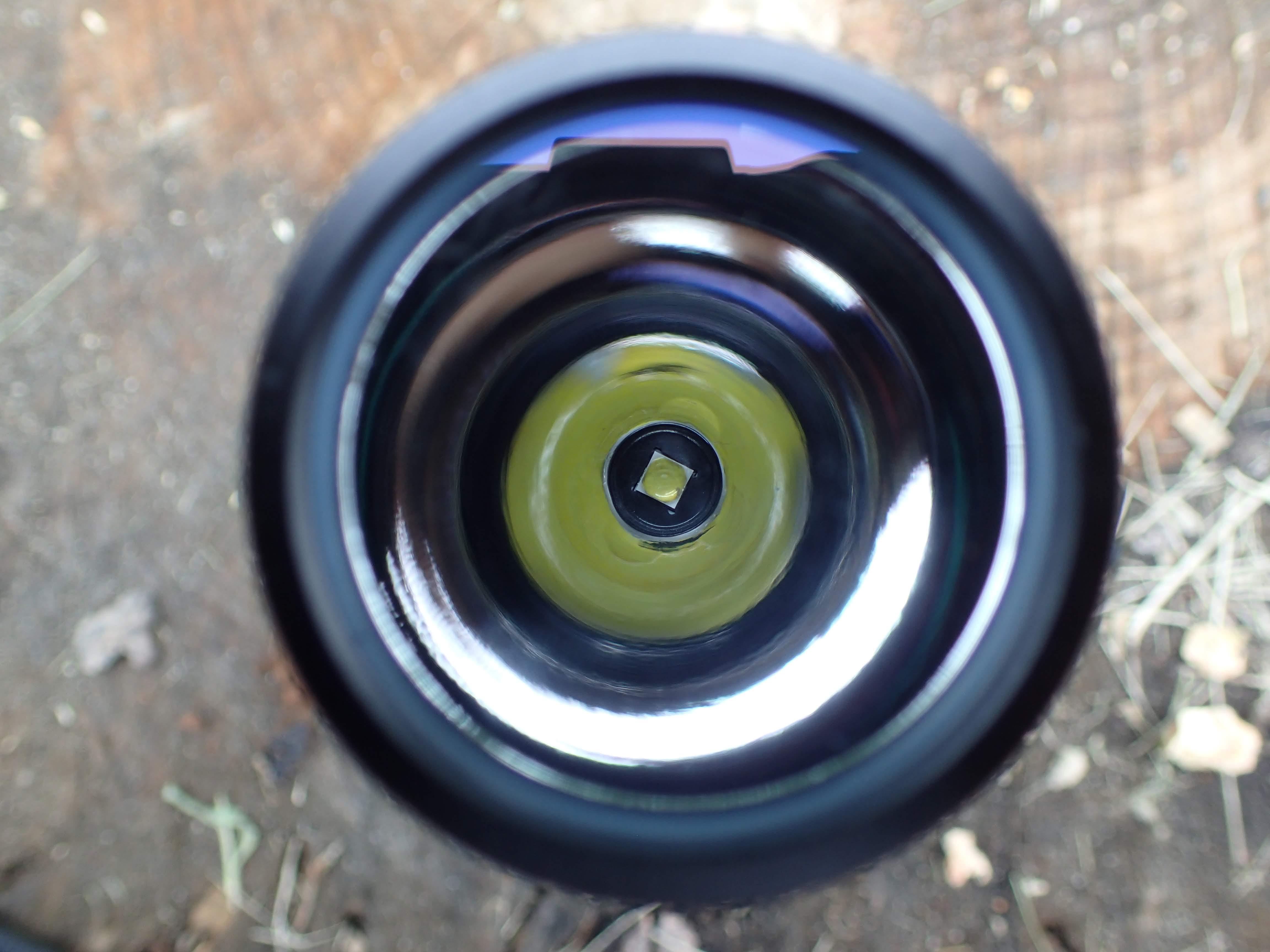 Nitecore provided two of their NL1823 2300 mAh cells for testing of this light. Note that cell capacities up to 3500 mAh are currently available, and higher cell capacities will give longer runtimes than shown in the graphs below. 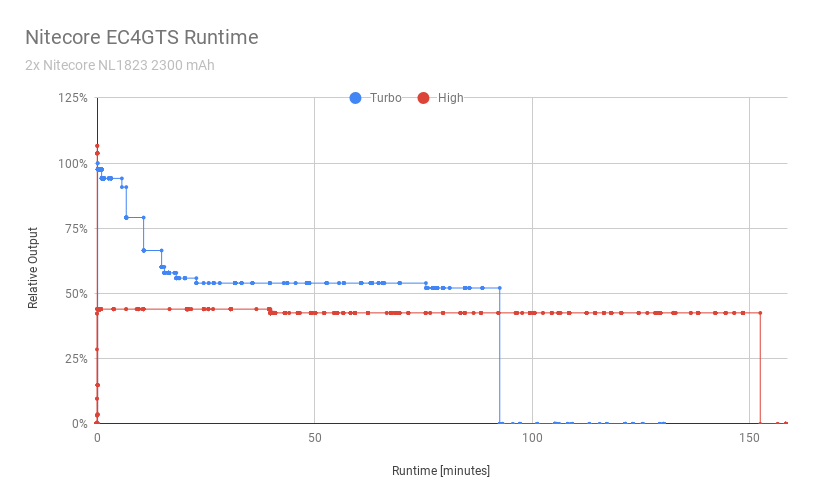 Runtime on turbo and high were tested. Turbo steps down quickly, before settling around 55% output after 20 minutes. The light continued to run, going out after an hour and a half with the 2300 mAh cells. The runtime on high is extremely impressive. The light maintained almost 100% of it’s starting output with no discernible step downs at all for over 2.5 hours before switching off. In some cases, it’s nice to see a step down to moonlight near the end of the run so you can use the light for a bit longer, but I find it amazing that this light can sustain this sort of output for so long.