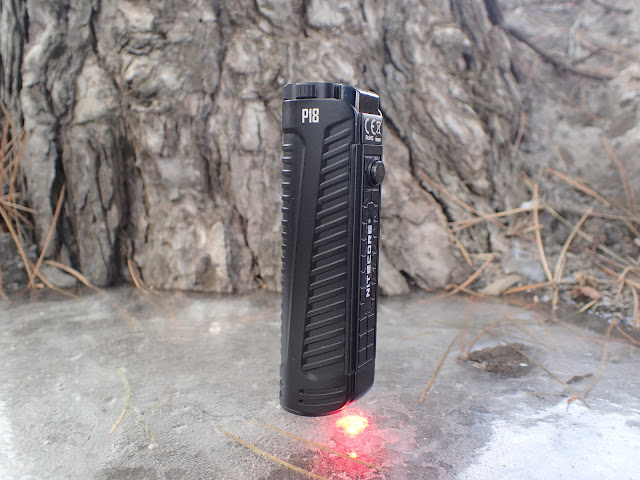 Nitecore was generous to send over a pre-release prototype of the new Nitecore P18 that was announced today. Now that it's been announced, I can finally share my thoughts on it!
This light falls into the "Precise" series of lights, mainly lights with a tactical focus and a tail switch. What makes this light stand out is the use of an electronic two stage switch instead of a mechanical switch. The P18 also differentiates itself with it's asymmetric design, secondary red LED, and compact size.

This is a new light with a new form factor, and I love it. The switch and UI are great, the shape and size are ground breaking, and the addition of a red light is fun (even if I don't find red light all that useful). This a fantastically 'tactical' light that doesn't compromise on being a great EDC as well.
The reduced water resistance compared to some other lights isn't ideal, and I with a neutral white or high CRI option was available, but this is easily my go-to tac light recommendation for now. 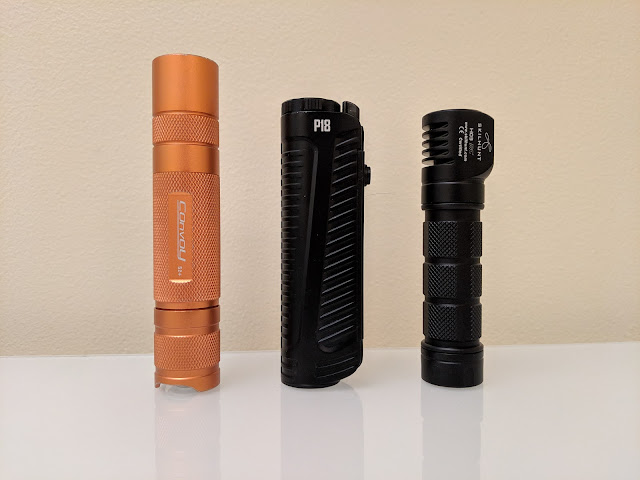 The light is significantly shorter than the Convoy S2+, and is just barely longer than the Skilhunt H03 RC - that headlamp is one of my shortest 18650 lights, and manages it's tiny size by using a side switch instead of a tail switch, and having a delicately thin tail cap and body tube. I can't stress enough how impressive the size of the P18 is!

The light is cast from aluminum like Nitecore's EC4GT and other lights from that series. It has a thick black anodized coating. 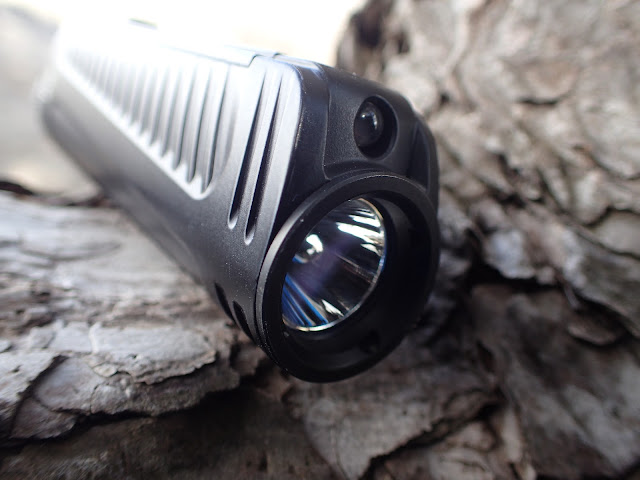 The bezel around the main emitter is black, though I believe it is made of steel. The black coating makes the light almost completely monotone, and adds to the 'stealthy' style. There are 4 detents in the bezel, suggesting it is screwed into place and not press fit. Off to the side, the red led is visible as well. Both are set deeply into the body, which should keep them protected if the light is dropped. 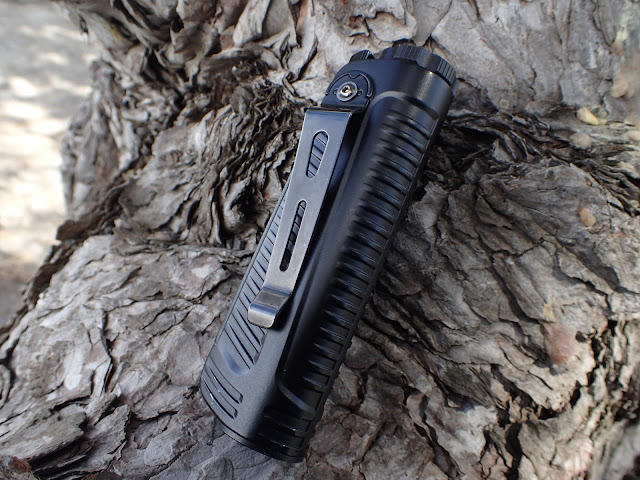 Being cast, the body is mostly a single piece. The back side houses the clip, and there are ribs throughout for grip. 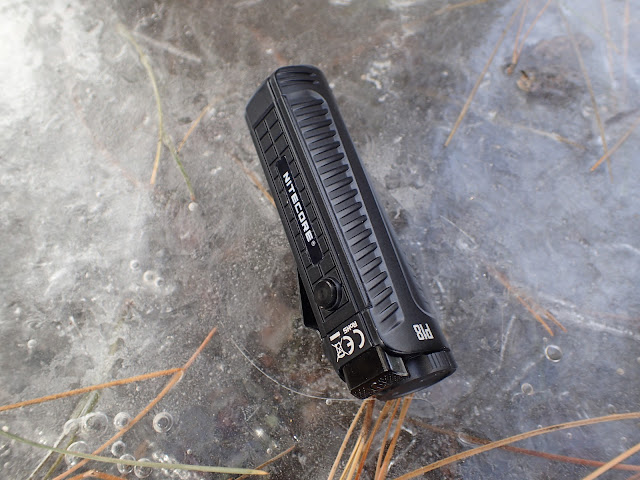 The opposite side has a separate panel that seems to be glued in place - this runs the length of the square blocking down the side. On this panel, there's an inset Nitecore label and the side switch. Above this panel are the regulatory markings etched into the anodizing, with the product name etched into the side. 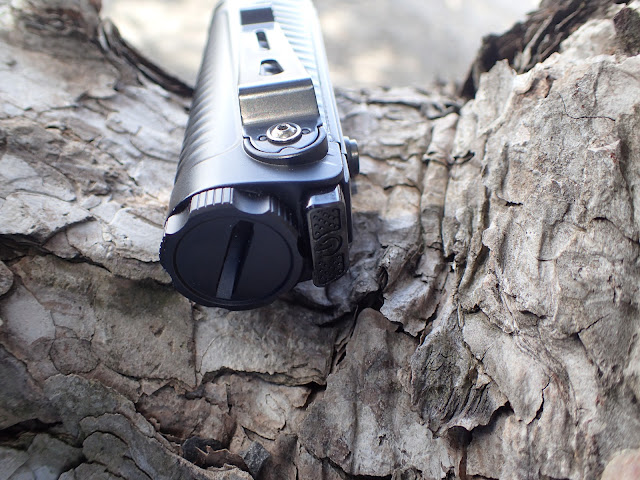 The tail of the light reveals the interesting two-stage silent switch, and and the cell cap. The cap has some reeding and detents around the perimeter to make it easy to remove, along with a slot in case it does get screwed in too tightly. The large flat cap means the light tail stands quite well. 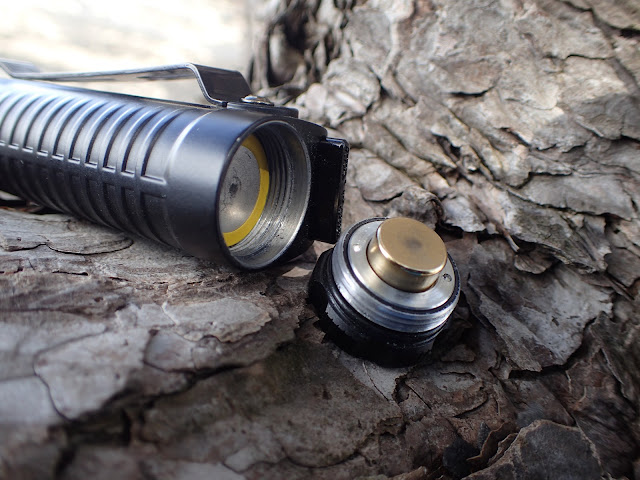 Opening up the cap, we can see that it actually screws into the light, like a plug, which is different from the normal construction. The threads are not anodized, so you can not physically lock out this light. The negative contact with the cell is a spring loaded brass button. There is a spring at the head of the light, serving as the positive contact.
I have to note that the early manual I received indicates the light will be rated IP56 - that's fine for just about any weather, but not designed to handle submersion. 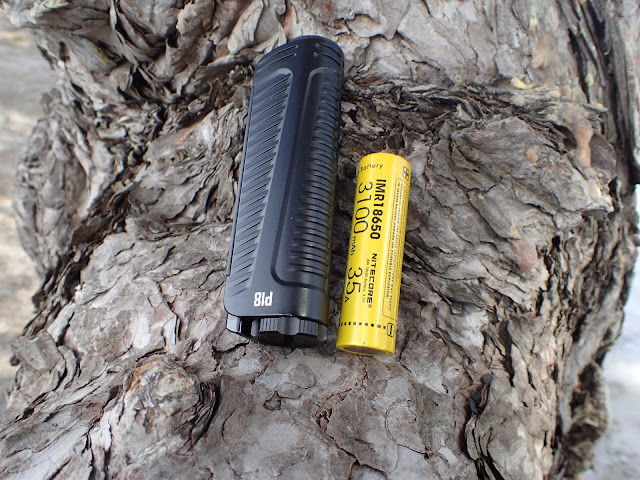 This early sample came loose in a box, with the cell inserted backwards and a bit of bubble wrap around the light for protection - which is fairly normal for an early sample from Nitecore. According to their site, the retail version should come with:
The user manual also mentions the possibility of an add-on bezel wrench accessory, which I believe would be a first for the company.

This light is extremely compact for an 18650 model. Nitecore managed to cut down on the length by adding a separate section off to the side of the cell for the switches. I suspect this contains the driver too, but I haven't opened it up to confirm. 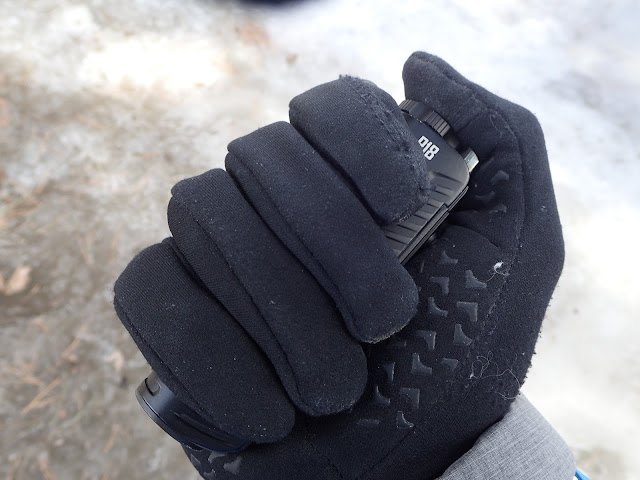 The result is an extremely comfortable grip, without sacrificing the ease of access that a tail switch has. The slim thickness and flat shape also make the light sit well in a pocket. 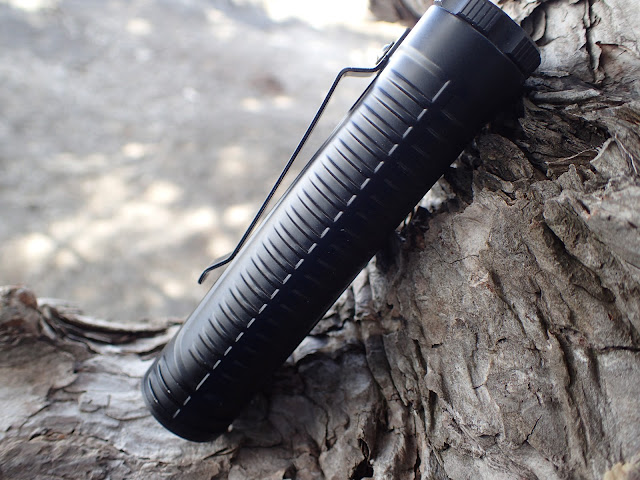 For easier access, the light also has a pocket clip, mounted on a slight angle. The profile is great, with a wide mouth so it easily slides over the fabric of a pocket. The clip is long too, which makes it very secure. It does not sit very deep, leaving about 24 mm protruding from a pocket. 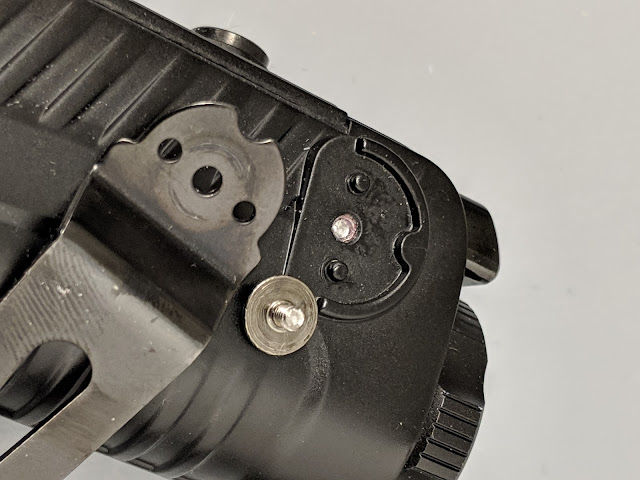 The clip on my prototype was not designed to be removed - there are protrusions from the body that keep it aligned. I tried to remove the screw from my sample, and it was secured with thread sealer strong enough to snap the screw head off. The product page mentions that the clip is removable, so I'll have to reach out to Nitecore and make sure production versions aren't glued in place. 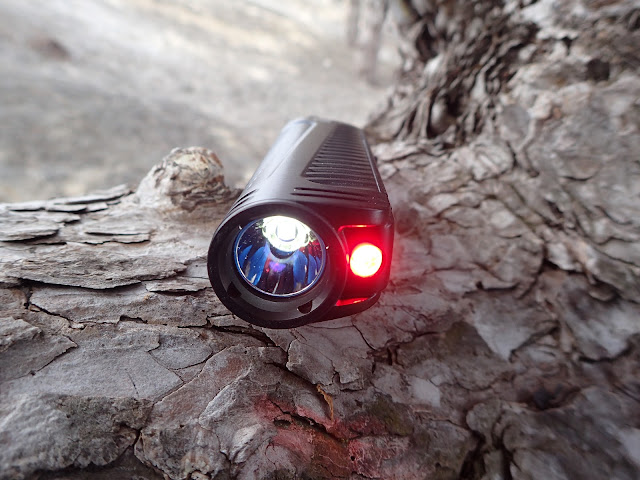 In the early version of the manual, the modes are listed as turbo (1800 lumens), high (850) mid (260), low (65) and ultralow (1). The red LED is single mode at a claimed output of 10 lumens.
The light is controlled from the two switches. The side switch is fairly standard, while the tail switch is a two-stage switch capable of registering either a full or half press. Nitecore is also noting how silent this switch is, and I can confirm it's far quieter than any mechanical switch I have used.
When you first insert a cell and connect the tail cap, the red LED blinks out the voltage. Note that the red and white LEDs operate independently of one another - you can use either one individually, or both together. The side switch almost exclusively controls the red LED, and the tail switch controls only the main white LED.
From off:

From on:
I really like the momentary turbo while on feature. Overall, the UI is both intuitive and powerful. It seems to have shortcuts to each mode from each mode.
I also like that voltage indication is used instead of a certain number of flashes - I don't need to remember what number of flashes indicates full, and the indication works regardless of the cell type used. 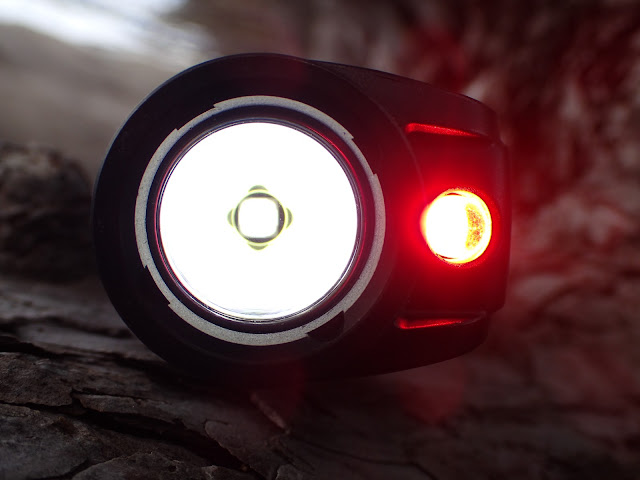 The light uses a cool white Cree XHP35 HD for the main emitter, and a 5 mm LED for the secondary red. Nitecore has been using these XHP35 LEDs for a while now and, while I would personally prefer a warmer or more neutral tint, I like them overall. This one is paired with a small, smooth reflector, and it gets a nicely defined hot spot with a decent bit of spill.
The beam from the red LED has a few artifacts from the shape of the housing it's in, but I doubt that will be an issue. These red LEDs tend to be used as low power lighting for reading maps and such. 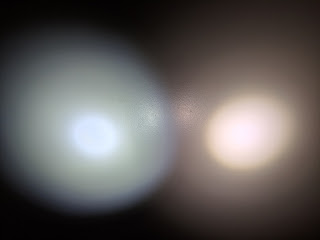 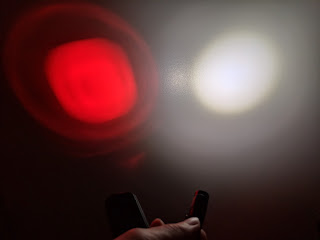 I took a quick shot of both beams next to a 4500K Nichia E21A JetBeam JET-μ for comparison. 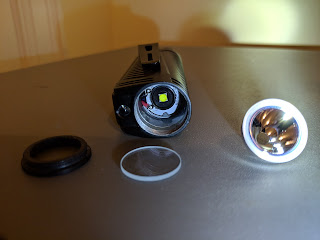 The main emitter is easily accessible, and on a standard MPCB.

The light came to me with an unprotected flat top Nitecore cell, the 3100 mAh IMR18650. It can run on a single 18650 cell, two CR123A cells, or two 16340 cells. The light works with longer protected cells, but the manual notes that anything over 67 mm will result in a gap between the tail and the light. This means the o-ring won't make contact, and I suspect this is why the threads are un-anodized and, in part, why the water resistance isn't as high as some of their other lights. It is likely that any of the two-up cell configurations will result in this gap showing.
Standby drain is 50 μA, which would drain the included 3100 mAh cell in about 7 years.

Runtime was tested with the included cell on high and turbo. The turbo test was stopped when the light was very dim, at which point the cell voltage was measured at 2.98 V. After the initial thermal throttle from turbo, the light settled at around 28% of the output at 30 seconds and held flat for the remainder of the test. Both tests ran for just over 2.5 hours, which is well above the manufacturer's claims.

This product was provided free of charge by the manufacturer. I was not paid to write this review, and have tried to be as unbiased as possible.
Manufacturer's product page
Product listing on Amazon (affiliate link)
1x18650 2xCR123A Cree XHP35 HD Flashlight Nitecore Red light