The light I’m looking at today is the Nitecore MH25GTS. This is a single 18650 light with the ever popular dual switch design, with a forward clicky for power and a side switch for modes. This light is extremely similar to their P12GTS I reviewed earlier with two major differences - the head is slightly flared, for a bit more throw, and this light features built in micro USB charging.
Note that Nitecore also has an older light called the MH25, but that is very different. It lacks a side switch, uses the older XM-L emitter, came packaged with a smaller cell, and was really a different light altogether. I think the naming convention is so similar because both lights have a similar form factor, and are tailored to customers looking for ‘tactical’ lights with built in charging.

The UI on these dual switch lights is superb. Add to that that this light ships as a complete kit, and I think it’s a winner. The dust cover on the charge port is a bit less secure than I would like, and the larger head doesn’t add all that much throw, but I think this is a great choice for anyone looking for a light of this style.
I have to add in here that the charging port is internally waterproofed, and that’s always a selling feature in my books!

As with all the lights I’ve handled from Nitecore, the build is solid. The light has a crenelated bezel at the front. I prefer smooth bezels, but this one isn’t overly aggressive like some other lights on the market. The head is slightly flared to fit the larger reflector this light uses compared to the MH12GTS and P12GTS, lights I would consider ‘siblings’ to this one.

At the base of the head, the light has some cooling fins cut into it. These go most of the way around the body, broken up on one side by the switch. This switch is made of metal, but has a clear ring between the actual button and the ring holding it in place. This ring has a blue indicator LED behind it, and is used for voltage indication. I initially thought the center portion of the button was silver colored plastic, but I scratched the finish off and confirmed it was indeed metal as claimed.

Towards the tail of the light, there’s a friction fit belt clip.
Past the pocket clip, there’s a threaded metal grip ring. This is designed to help make activation of the tail switch easier. This ring also adds additional anti-rolling points to the light, and helps you keep a solid grip on the body during use. The ring can be removed, although doing so leaves the threads exposed.
The tail houses a forward clicky switch, which is flanked by two ‘ears’ that allow the light to tail stand. The switch is slightly off center to make room for the usb port and the dust flap that covers it. The flap is not especially secure, and can often come loose when nudged, but Nitecore claims the port is waterproofed internally as well.
The tail cap has large, smooth square cut threads. These are not anodized, because the light actually uses a dual tube design. This is commonly done to enable functionality while the tail switch is ‘off’. Even though these threads are not anodized, a slight turn of the tail will mechanically lock out the tail switch of the light. There may still be some slight phantom drain over time, but it won’t be possible for the light to turn on.
The cell tube is not readily removable, but another spring is visible at the far end, serving as the positive contact for the light.
The larger head of this light compared to the similar tube lights give it a bit more heft, a bit more throw, and a bit more of a ‘tactical’ look I guess. I found the P12GTS to be long for it’s size, mainly because other tube lights are so much shorter - but this light adds integrated charging, and the larger size seems to feel just solid and more ergonomic, instead of lanky.

This is a full kit. In addition to the light itself, this one comes with:
It's really great to see such a high capacity cell bundled with this light by default.


Ergonomics and Retention (And interchangeability)

Ergonomically, this light has a good feel. The knurling adds plenty of grip, and the flared head and grip ring keep the light in your hand right where you want it. My only complaint is that the off-center location of the rear switch, combined with the rubber flap for the charge port that can pop open and get in the way at times, can make it a bit awkward to activate the tail switch. This is especially evident when wearing bulky gloves.
If you happen to have a few of these newest Nitecore lights handy, the tailcaps all lego. That means the tailcap from the P12GTS fits on the MH25GTS, effectively making a P25GTS? All functionality remains identical except the light obviously can’t recharge, since there’s no port in this tailcap. I used the light this way at times, because I prefer the tail switch without the charge port and usually charge cells externally anyways.
Aside from holding the light in hand, Nitecore include all the common options. There’s a friction fit belt clip, that attaches for head-down carry. This could be used as a pocket clip as well, but the light would not carry very deep. I found the belt clip a good alternative to the holster if you’d like to have the light at the ready without the added bulk.
If you do prefer to use a holster, there’s one included in the package as well. It’s Nitecore’s standard fare, which is to say it’s good. The light fits in the holster bezel up, and is a bit tight. The flap has a velcro closure to ensure the light stays in place.
Finally, the light has a lanyard included. This can be attached at either of the two holes in the tailcap, or at the hole in the removable grip ring.

This light has 5 output levels, all of which are in the main group. Like most lights with this switch setup, there is mode memory. The tail switch can be held half pressed to momentarily activate the last used mode, or depressed fully to lock the light on. When the light is on, a single press will cycle through the modes. The extra features this UI adds really makes this light great to use.
In addition to the light modes, there are also two ways of indicating cell voltage. When a cell is first installed into the light, the indicating LED under the side switch blinks out the voltage. 4.1 V would make the switch blink 4 times, pause, then blink once more. The cell level can also be checked when the light is off by tapping the side button. In this instance, the charge level is shown with a series of flashes - 3 is full, 2 indicates 50% or less, 1 indicates 10% or less. I like that this feature is there, but I wish they would have used the same voltage flash that is shown when the cells are installed.
When the light is on, the side switch will start to blink when the cells are half empty, and will flash continuously if the cells are nearly depleted.

The XHP35 HD used in this light is cool white. Nitecore claims a maximum output of 1800 lumens, which is great for a light in this size class. This emitter is not as large as the XHP50 or XHP70, which means the light is still reasonably throwy when coupled with the smooth reflector. The spot of the beam is a great, pure white. The corona and spill show a bit of tint shift, but I didn’t find this distracting in real use. Overall, I found the beam very functional.
I can’t help that a light with a larger head for more throw (compared to the tube lights in this series) would be better suited to the domeless version of this emitter, the XHP35 Hi. I, for one, hope Nitecore will iterate on this design and release an MH25GTSGT at some point in time.

This kit includes a Nitecore 3500 mAh NL1835HP cell. This light has nice, double springs at both ends of the cell tube. These are long enough that they provide good contact even with a flat top unprotected cell. Nitecore also claims support for 2xCR123 cells and 2x16340 cells, although these were not tested. 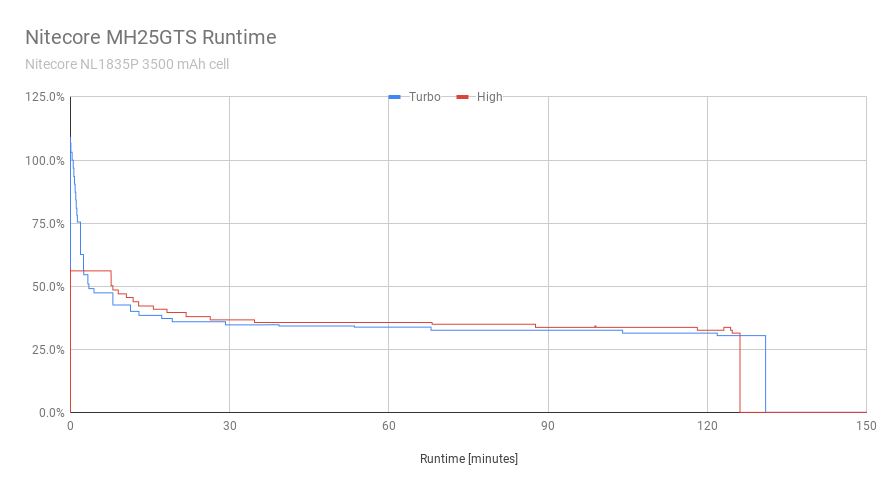 Runtime on turbo and high were tested with the included 3500 mAh Nitecore cell. Due to the thermal regulation, the light actually manages to last longer on turbo than it does on high. On high, the light went out after 126 minutes, almost perfectly matching the 2 hours spec. Regulation is nice and flat - both modes settled at around 35% of the turbo output and stayed there until the cell was drained.


Charging of the included 3500 mAh cell was measured from the micro USB port. The charging starts at around 0.7 A, but quickly goes from CC to CV mode. This means that fully charging the included high capacity cell took over 9 hours to complete, which is quite slow. A high drain cell like this could certainly take a faster charge.

For the longest time I had a grudge against lights with built in charging because, despite the convenience, I never had much faith in the rubber flaps used to keep water out. Some brands like Nitecore have taken a big step forwards by waterproofing the actual ports themselves now, so the flaps are intended just to keep dirt and debris clear from the ports.
I tested this light turned on and submerged for 30 minutes with the port open, and it worked fine. There was no evidence of any ingress into the light. Love it!