YLP sent me their newest light, the Unicorn 1.0. This is a single 18650 light, controlled by a backlit side switch, with a single LH351D behind a TIR.

This is a great light. The small EDC market is pretty competitive, but all of the newest and most exciting options have been focused on getting as much light out of a tiny form factor as possible - making lights that get hot extremely quickly. This focus has also lead to a huge number of lights with multiple LEDs and very floody beams that don'r reach far at all.
The Unicorn, on the other hand, seems to be all about practicality. It has a balanced beam with a good amount of reach, comes with a gorgeous high CRI LED, and has a reasonably high output without getting absurdly hot. The design is thoughtful as well - it's compact, and the recessed side switch is both easy to locate and protects against accidental activation. On top of all that, the light has a magnetic tail for hands-free use and the cell tube is long enough to take protected or unprotected cells.
All that to say this is fantastic. This has been my most carried EDC light since I've received it. It's also going to be a light I'm going to recommend to a ton of people from now on - it has great light quality, a simple but flexible UI, takes whatever cells they prefer to use, and doesn't skimp on features or burn holes in pockets. 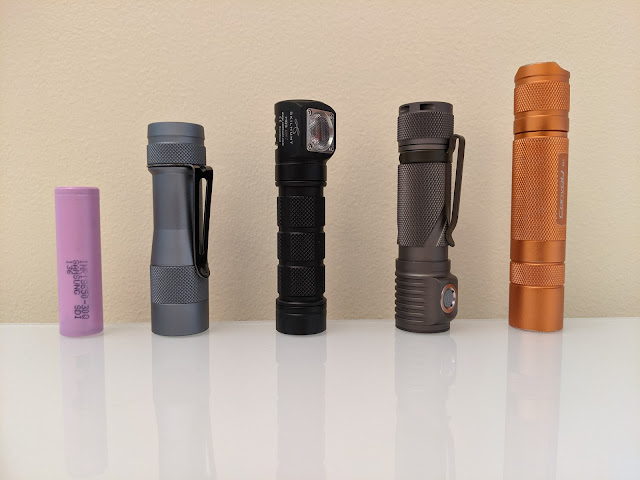 It's clear that this light was designed for EDC, with compactness in mind. It's a few millimeters longer than the famously compact FW3A and Skilhunt H03 RC, but much shorter than the Convoy S2+. Very impressive considering that the magnet and single-LED optic both increase the length of the light.

The light is made of aluminum with a 'natural' anodization - sort of a tan or grey color, depending on the lighting. 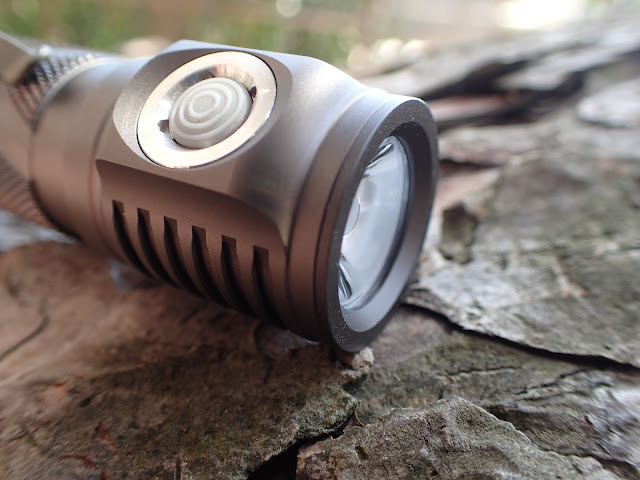 The head of the light has a smooth, shallow bezel. There's no glass protecting the optic - I've never had an issue with this affecting the beam of a light, but it's likely that the plastic TIR will show some surface scratches over time. I'm not sure if the bezel is pressed or screwed in place. The rest of the head has shallow fins going around the diameter, with a protrusion shielding the switch. 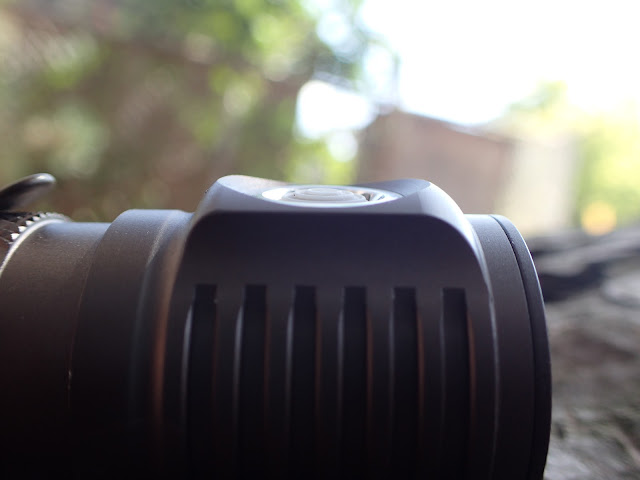 Thanks to this protrusion, the switch is set into the body far enough that I never had it activate over weeks of carry in my pocket, while being very easy to locate by feel. this hump will also stop the light from rolling on a flat surface, even if the clip is removed. 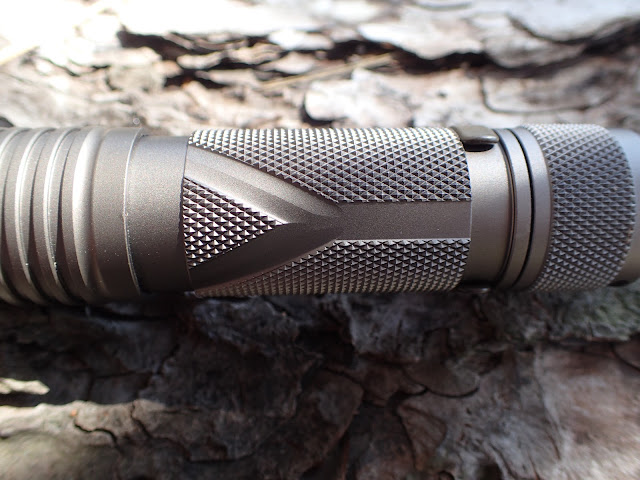 The body of the light is covered with knurling, with a few sections milled out for aesthetics and extra grip, in a pattern that reminds me a bit of the Acebeam EC65. In any case, it's a nice bit of design flair that helps the light stand out. 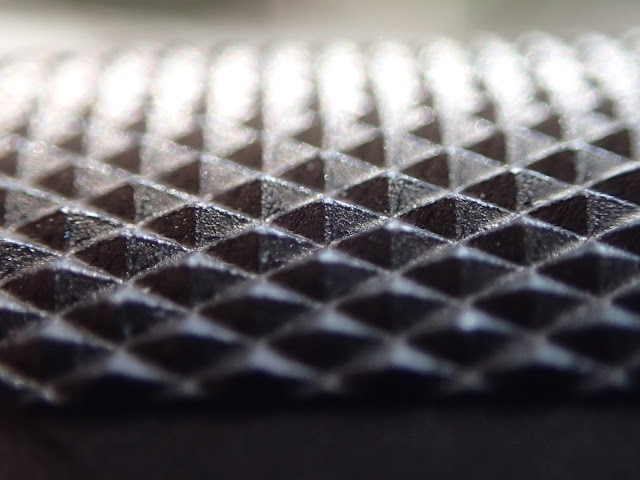 The knurling is surprisingly aggressive and sharp - I haven't handled any lights like this except for the Convoy C8+. I was worried it would be uncomfortable in a pocket, or difficult to remove, but I haven't found that to be the case. If you use the clip, you may find yourself wearing out pockets a bit more frequently than normal with this one. 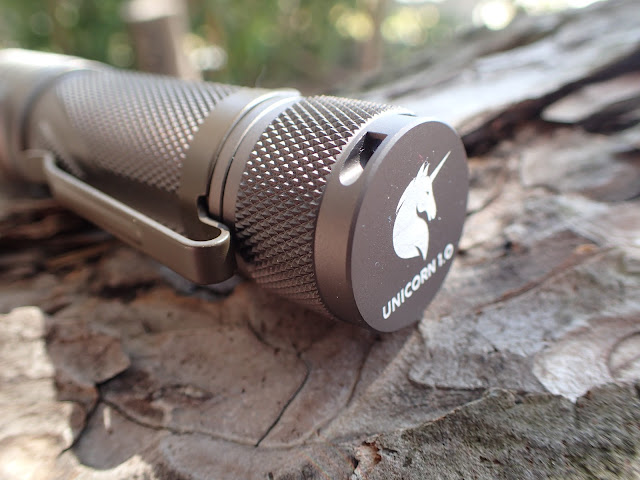 A perfectly flat tail means tail-standing is very stable with this light. There's a lanyard hole on the edge, and the same knurling is continued around its perimeter to help with cell swaps. 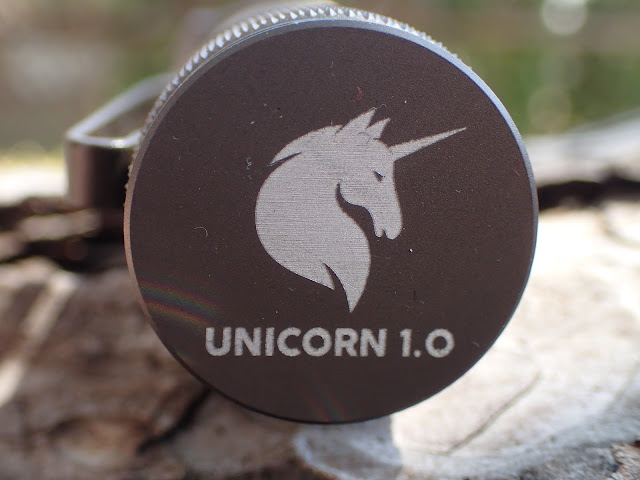 YLP even made a fun little logo for this light - and the "1.0" makes me hopeful that they will continue to iterate on this design in the future. 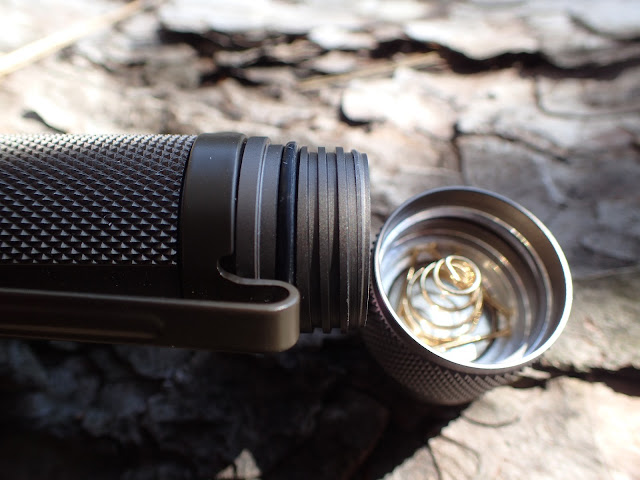 Some of the chunkiest threads I've ever seen keep the tail in place. These are square cut and anodized, so you can mechanically lock out the light to prevent accidental activation by loosening the tail. There's a slim spring serving as the negative cell contact. 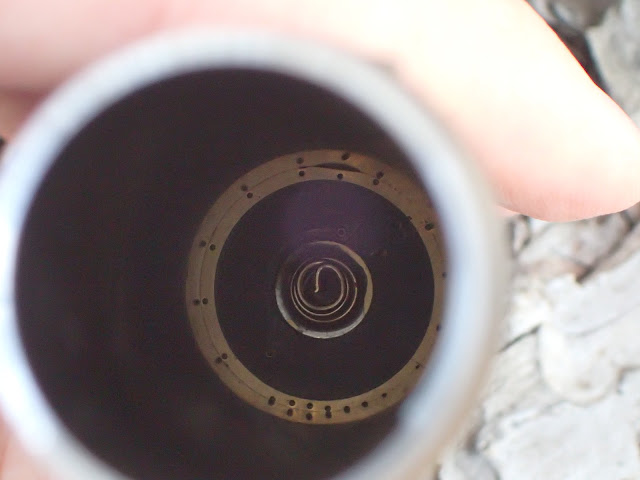 It seems that the tube is glued to the head, or just screwed very tightly, but it wasn't readily removable on my sample. Looking up the cell tube, we can see a smaller spring at the head of the light serving as the positive contact. 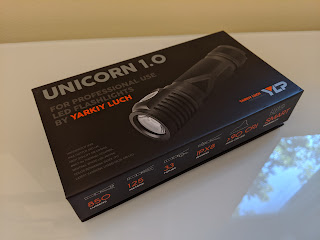 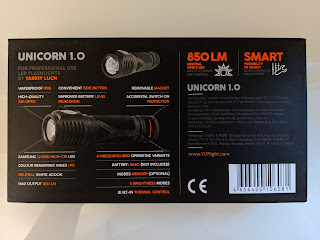 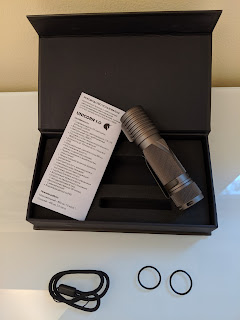 YLP has pretty snazzy boxes for all their products, and this is no exception, with custom cut foam and a fancy magnetic closure. Inside, you get: 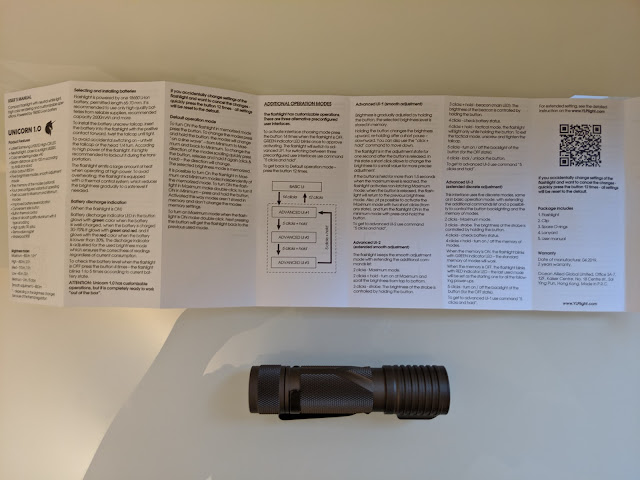 The included manual is English on one side and Russian on the reverse, with a description of the UI and a QR code that leads to the Russian product page.
If you do want to tweak the interface beyond what's included in the manual, there's a more detailed full manual online with even more advanced configuration options. I won't go over all those here, but you can read them at:
http://ylplight.com/attachments/get/40/unicorn-1.0-advanced-um_eng.pdf

As I've already mentioned, the light is extremely compact, the knurling is extremely grippy, and the switch is fantastically easy to locate. Ergonomics are great, and I find it quite comfortable. 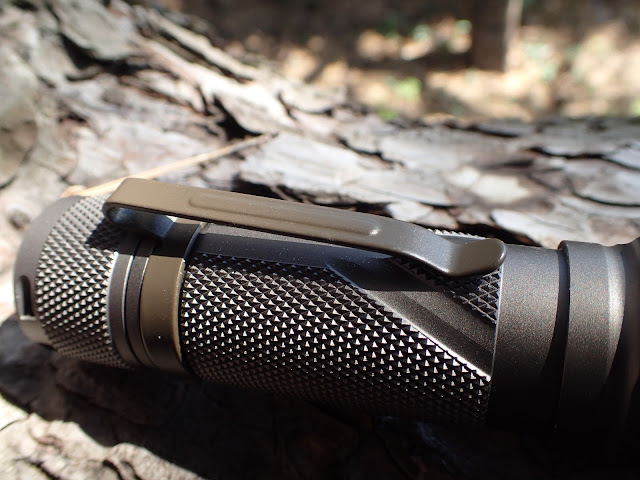 The first retention method, which comes installed with the light, is the friction-fit pocket clip. It has a tan coating to better match the anodization on the light, and the profile is good. It's fairly deep, but does leave a few millimetres sticking out of a pocket. You can reverse the direction for a slightly less deep head-up carry orientation, or even for use as a hat light if you're especially ambitious. 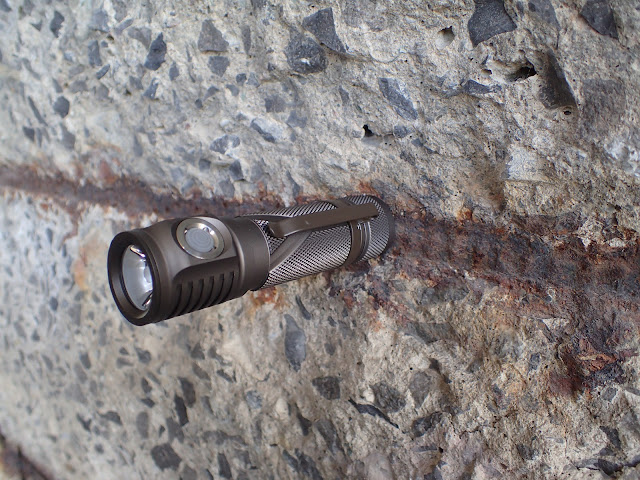 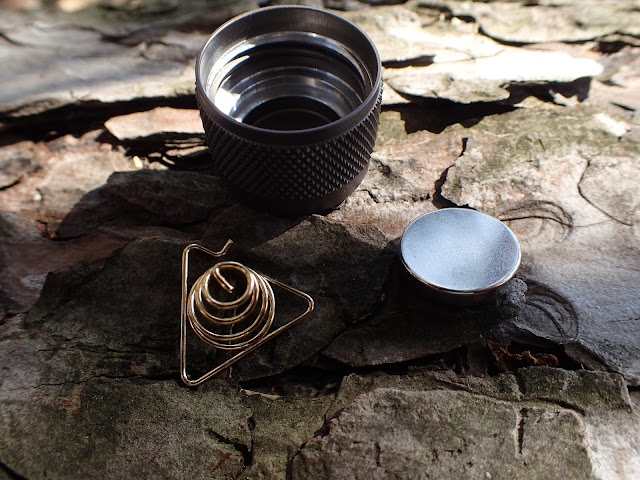 The magnet is very strong, and has no issues holding the light in any orientation - even to this old chunk of rebar partially buried in a concrete wall. If you don't want a magnet in your pocket, it can easily be removed by taking out the spring.
A lanyard can also be attached through the hole in the tailcap.

All functions of the light are controlled via a single side switch, with both a red and a green indicating LED beneath it.

This is a variation of my favorite UI, and nails all the basics. I prefer when lights go from the highest mode around to the lowest instead of reversing the direction, but this works well enough. The light only goes down if it's at the highest mode, it doesn't 'remember' the direction - so you always know what action is coming next. The levels are stated as maximum (850 lumens), high (450), med (170), low (40), and minimum (3). A lower minimum would be a great addition to this light, but 3 lumens is fine for most applications.
There are 3 more UIs that can be accessed - Advanced UI 1 is a smooth ramping mode, 2 is a smooth ramping with shortcuts, and 3 is another UI with discrete modes but more configuration options. For myself, the basic mode suits most of my needs - but it's great to see all these options. Some of the features include a momentary mode, adjustable brightness strobe, always on indicating switch, battery check, the option to toggle mode memory on or off ,and a beacon mode. 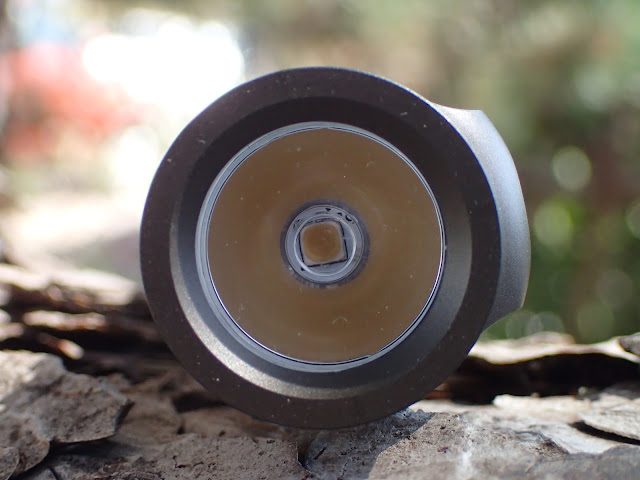 YLP chose to use a 4000K Samsung LH351D behind a smooth TIR. This is an absolutely fantastic choice. The LH351D has a great tint, high CRI, and doesn't sacrifice output either. They used the same emitters for the Panda 2M CRI, and that's what makes it one of my most-used headlamps. I hope we see a more widespread use of this LED in the future.
In my sample, the LED appears to be slightly off center. I didn't notice it in real world use, but it does make the beam a bit lopsided against a white wall if you're looking for it. 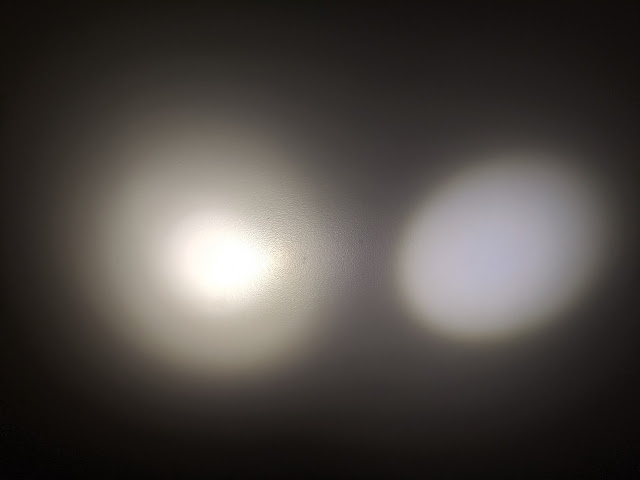 Compared to a 4500K E21A, it's clear to see this is a fantastic LED, with comparable tint, but a much tighter hotspot than the AAA host I use as a reference.

The light is powered by a single 18650. It's not picky either - everything from an unprotected flat top to a longer protected button top NL1826 works without issue.

The runtime was tested with a Samsung 30Q. The highest mode has a thermal step down throttling it, but the next highest mode is relatively stable. Runtime on turbo far exceeds the 1.5 hour specification, probably as a result of the step down. On high, the runtime also exceeds the 2.5 hour spec by a fair amount. The output isn't perfectly flat, but there is no PID ringing or huge jumps either - perfectly functional.
When the light is on, the indicating switch glows green. At 3.7V, both red and green LEDs glow, at 3.4V only the red is lit, and at 2.5V the low voltage protection turns off the light entirely. Using an e-switch means there's some standby drain on the cell when the light is not in use, which I measured at 21μA - in other words, it's negligible. The self discharge of the cell will be more of a factor.
Enabling the locator LED beneath the switch, the standby drain is still only 67 μA.

This product was provided free of charge from the manufacturer. I was not paid to write this review, and have tried to be as unbiased as possible.
Manufacturer's product page (and the only place to grab this light for now!) Coupon code "uni1" should save you a few dollars.