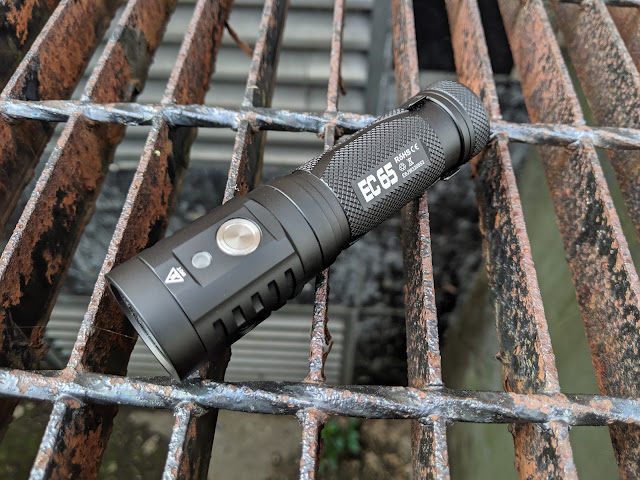 The Acebeam EC65 was sent to me by Bestlight - unfortunately, they've had a bit of a disagreement with Acebeam and aren't carrying the light anymore, and their stock has already cleared out thanks to the unbelievable price they put it up at. Bestlight is making some changes to the way they work with Acebeam, but will still be carrying the brand in the future. Nonetheless, that doesn't change how I feel about this light, so I've gone ahead with the review. I'd still recommend checking them out for great lights from other brands.
The EC65 is a 21700 powered light with USB-C charging, a metal side switch, and quad LEDs. The version I have uses cool white XHP35 Hi, but it's also available with Nichia 219C.

This is a really great light, but for some reason I didn't like it all that much. The build quality is superb, the UI is good, output is huge... but there were too many little features lacking that just left me wanting more, especially at the price it's asking. If you want huge output from a small light, this still might be a great fit for you. 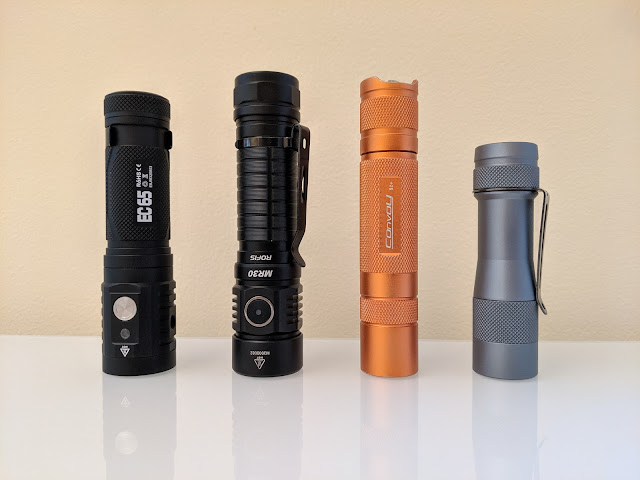 The build on this light is fantastic, and probably my favorite feature. The black anodizing is matte without feeling 'chalky', and seems thick. 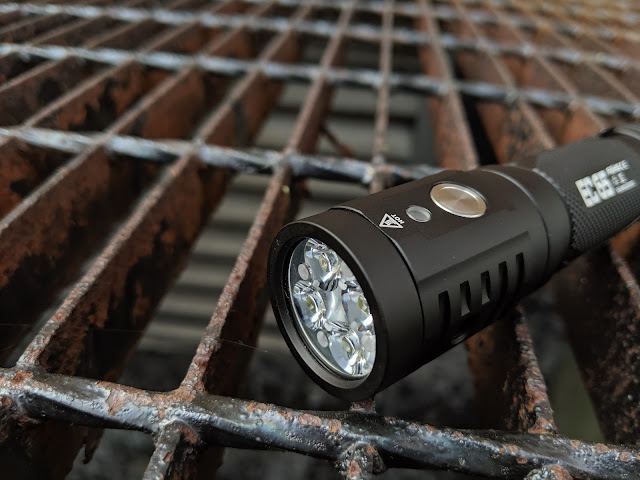 The bezel is smooth and short, holding the quad TIR in place behind a glass lens. There's some shallow fins around the head for cooling.On the top side, the button is stainless steel, and sits in a small flat section to help prevent accidental activation of the light. There's an indicating LED in front of the switch. 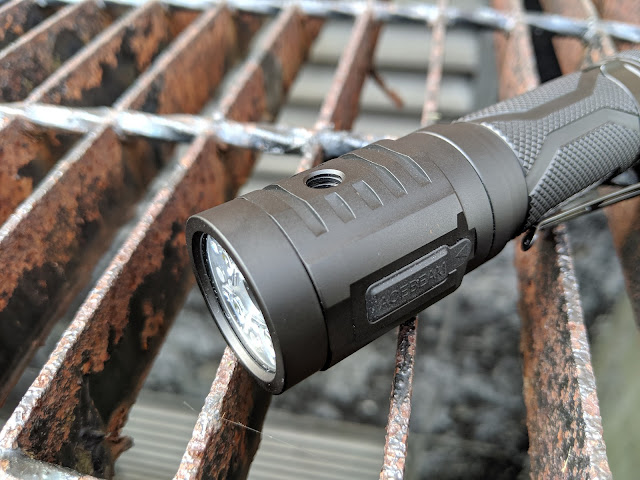 Opposite the switch, a dust cover protects the USB-C port from contaminants. There's also a tripod hole on one side of the head. 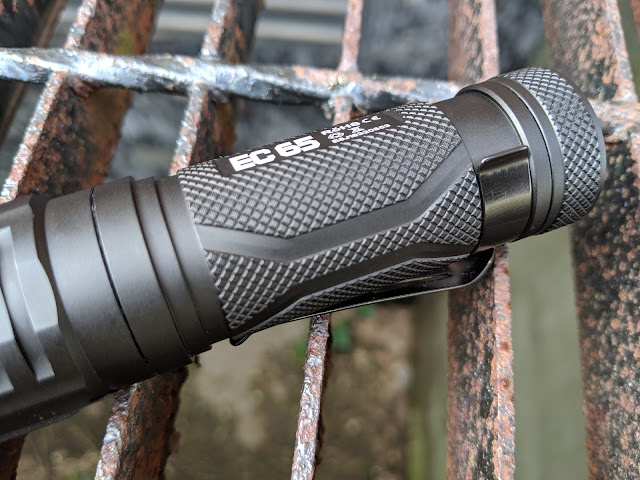 The body tube is knurled, but also has an interesting set of grooves milled into it. These are mostly for look, but they also add a bit more grip to the light. At the tail end, there's a groove where the clip is attached. 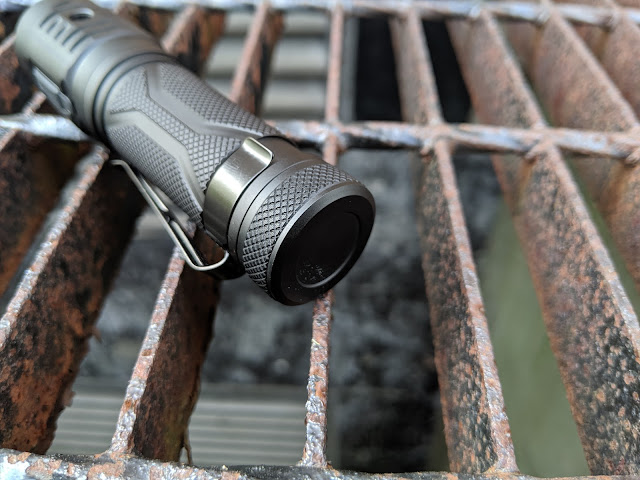 The tail is flat on the end, so tail-standing is quite stable. 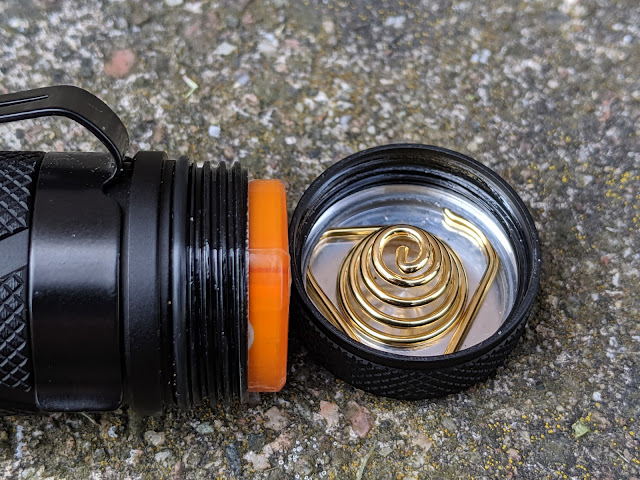 Inside, the tail threads are square cut and anodized, so the light can be locked out with a slight turn of the cap. The body does not readily unscrew from the head of the light.
The head end of the tube has a second spring, so flat top cells should work just fine. 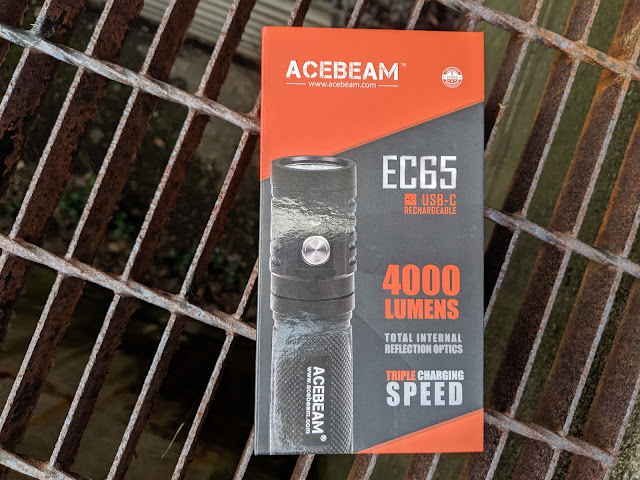 The light comes in a snazzy black box.
Inside the box, you'll find: 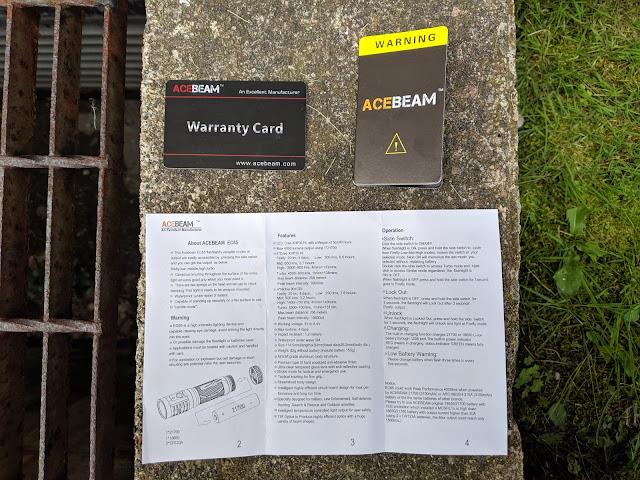 The parperwork includes a warranty card, warning booklet, and the manual.

The EC65 has a great feel in the hand. The button is reasonable easy to find, but might take a bit of fumbling around in the dark. The switch has remarkably little travel, but still has a tactile bump to let you know when it's pressed. 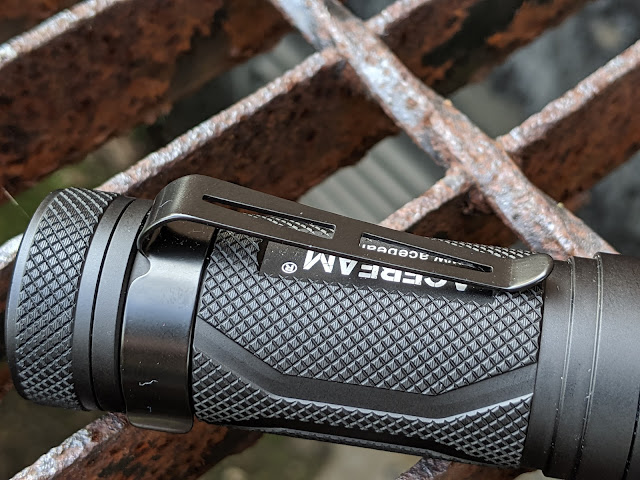 Out of the box, the light comes with the friction-fit clip installed. I wouldn't mind a bit of a deeper carry clip, but otherwise this gets the job done. 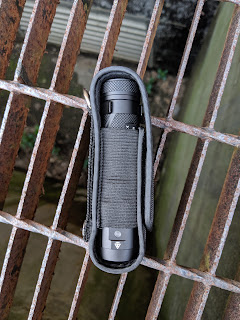 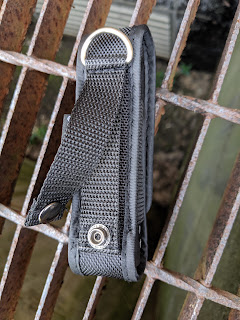 The light also comes with a nylon belt holster with elastic sides and a hook & loop closure. The holster has a metal D-ring, and both a fixed and snap-secured belt loop. The light will fit either head up or head down, with or without the clip.
The final method of fixing the light is the tripod hole in the side of the head - a nice addition, though I thin that is more likely to be used on larger lights. Notably, there's no magnet in the tail of this light, and no lanyard or place to attach one.

A single side switch controls all the modes on this light as follows: 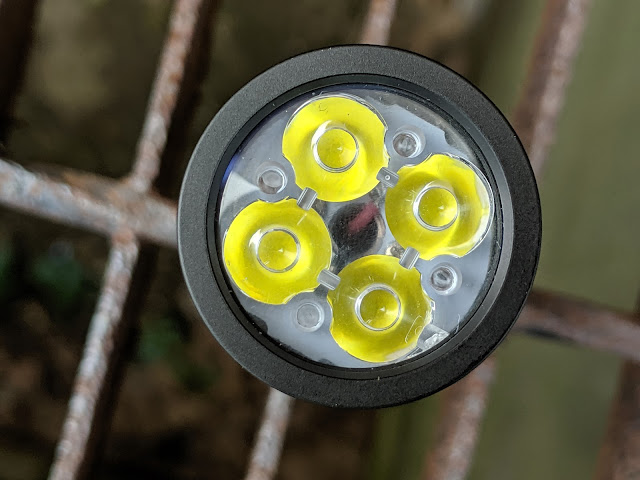 This light uses 4 XHP35 Hi LEDs in cool white, behind a clear TIR. The result is a baffling amount of light, but  a very floody beam. The beam is free of any major artifacts as far as I can tell.
This light does what it says on the box, but I think quads are just a bit too floody for my personal preference.

With the included cell, step down from turbo is fast and drastic - in less than 2 minutes, the light is down at 50% of the output at 30 seconds. It settles at 20% for the reminder of the run, staying on for 2.3 hours.
High manages to keep going for 7 minutes before stepping to the same level. Turbo actually has a longer runtime than high thanks to the drastic step down, though neither quite meets the 2.5 hours listed in the manual. In both modes, the light gets too hot to hold - so you'll want to lower the brightness a bit if you're using it for an extended time. As silly as the drastic step downs are, the output for the rest of the run is rock-solid stable. 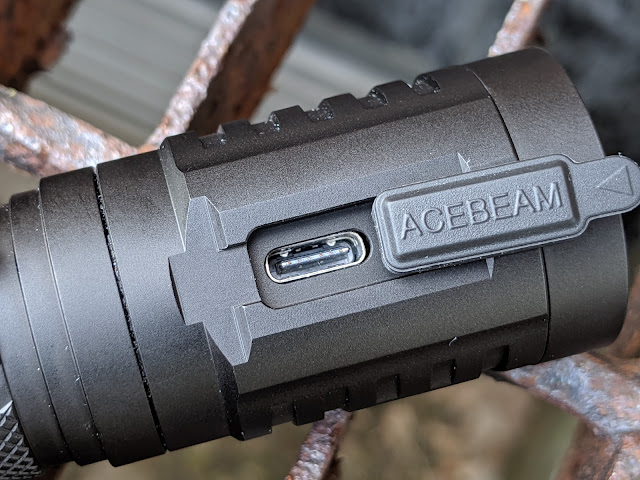 To charge the light, simply plug in a USB-C to USB-A charging cable like the one included. I tried a USB-C to USB-C cable as well, and neither my Pixel charger nor my XTAR EU4 would deliver power to the light - which shows that, even though this light uses the newer USB port (yay!) they still aren't using the matching spec (boo). 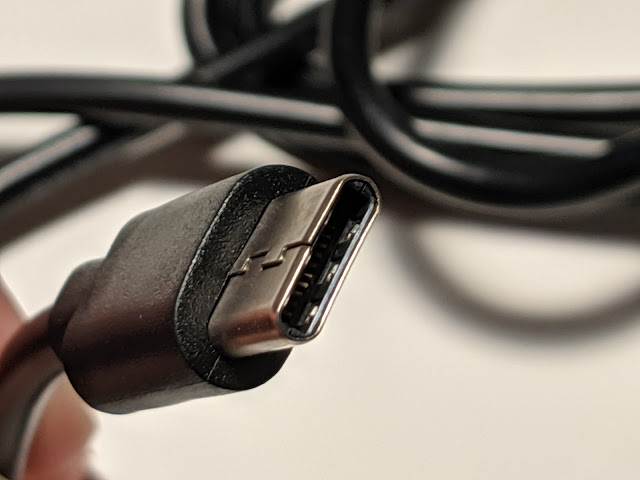 Also, the included charge cable seems to be quite cheaply made, and doesn't fit well into any other USB-C port on the devices I own. IT works fine for the flashlight, but the poorly mated 'sheath' portion catches in most ports.

Once you find a suitable power supply, charging works as expected. The rate peaks at about 2A, and takes a bit over 3 and a half hours to go from empty to full.

This product was provided free of charge from Best Light. I was not paid to write this review, and have tried to be as unbiased as possible.
Acebeam EC65 product page at Best Light (sold out already!)
Maukka's review of the EC65, with detailed measurements of output and light quality
Kaybi's EC65 review
Zeroair's review of the Nichia 219C version
1x21700 Acebeam Cree XHP35 Hi Integrated charging USB-C