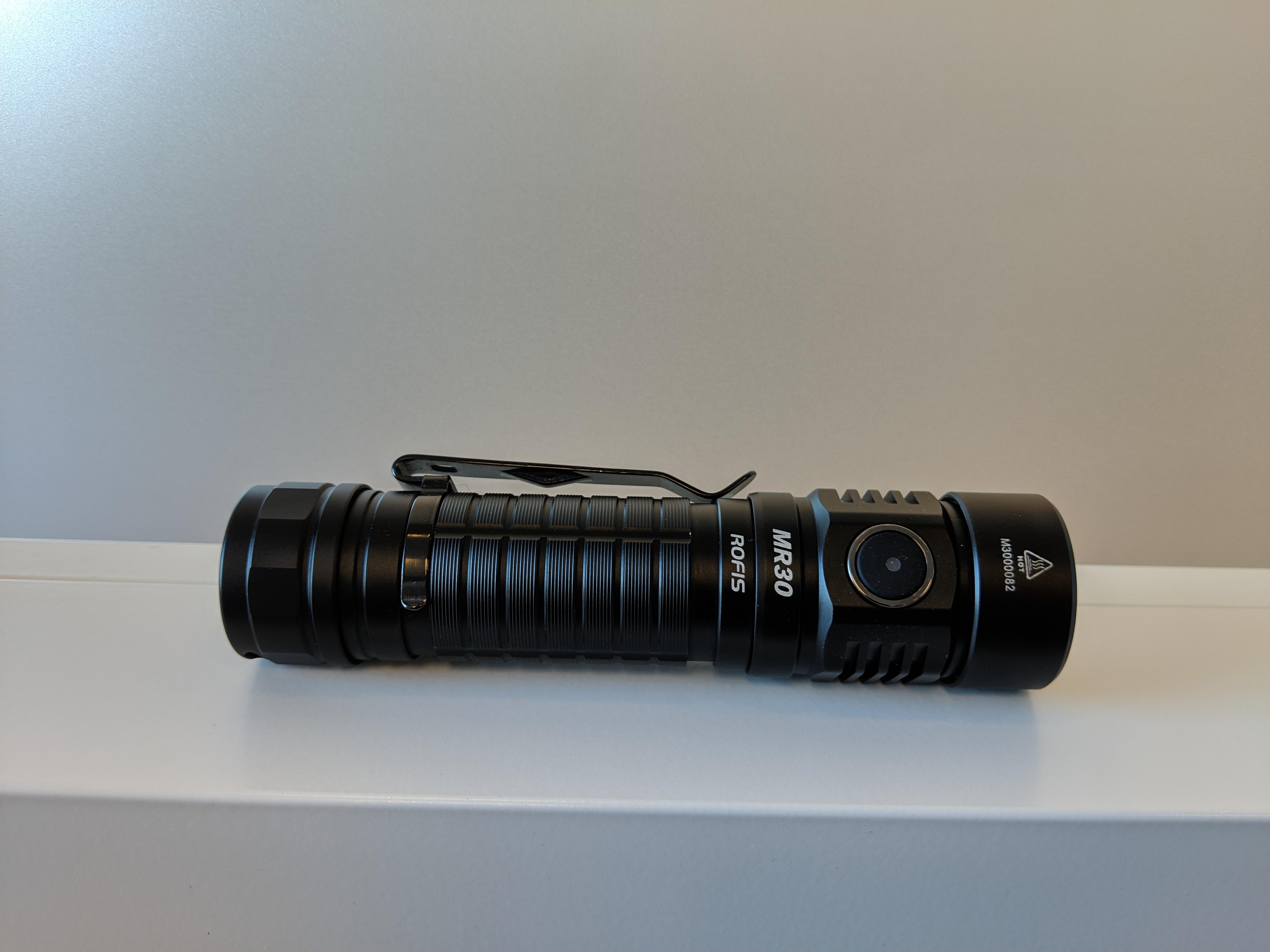 Today I’m taking a look at the Rofis MR30. Rofis already sent me their MR50, which I reviewed here, and I liked it overall. In that review, I said the light was a great powerbank and a decent flashlight. Now GearBest was nice enough to send me over one of Rofis’ other lights from this series, the Rofis MR30.
If you’re interested in this light, you can pick one up from GearBest at this affiliate link, and they gave me the coupon code BLFMR30 to bring the price down to $35.99. That code wasn’t working for me earlier today, but let me know if it works for you.
This light has a lot in common with the MR50, so if you’ve read that review some of this one will sound pretty similar as well.

This product is really an improvement over the MR50. It has a slimmer body, and a pocket clip, which make it overall more pocketable. The LED chosen for this light, the XHP35 Hi, gives a clean beam that I like a lot. Compared to the XHP50.2 in the Rofis MR50, this light manages to get more throw out of a smaller head, even with the slight reduction in output. For me, this is the best flashlight/powerbank I’ve used so far, and I like it a lot. This will be my new go-to backpack EDC.
The UI of this light is the same as the MR50, which is to say there’s plenty of room for improvement - it has no moonlight or very low mode, and not even a shortcut to the lowest available mode. I would love to see an update to the way that the modes on the MR50 are accessed.
On the powerbank side, I would love to see an upgrade to USB-C in the future. Micro-USB is becoming a bit dated in general, but I think a product like this would have a special benefit to using this newer protocol. USB-C supports both power in and out, which would eradicate the need to carry around a separate dongle just for powerbank use.

I measured this light at 121.2 mm long, 29.7 mm in diameter at its widest point, and 25.8 at its narrowest. Despite the larger cell and slight increase in girth, this is extremely similar in size to the Convoy S2+ I use as a benchmark in many of my reviews. The Convoy is far from the smallest light, but even so I really like how compact the MR30 is. Lined up below are the Convoy C8+, Rofis MR50, Rofis MR30, and Convoy S2+. 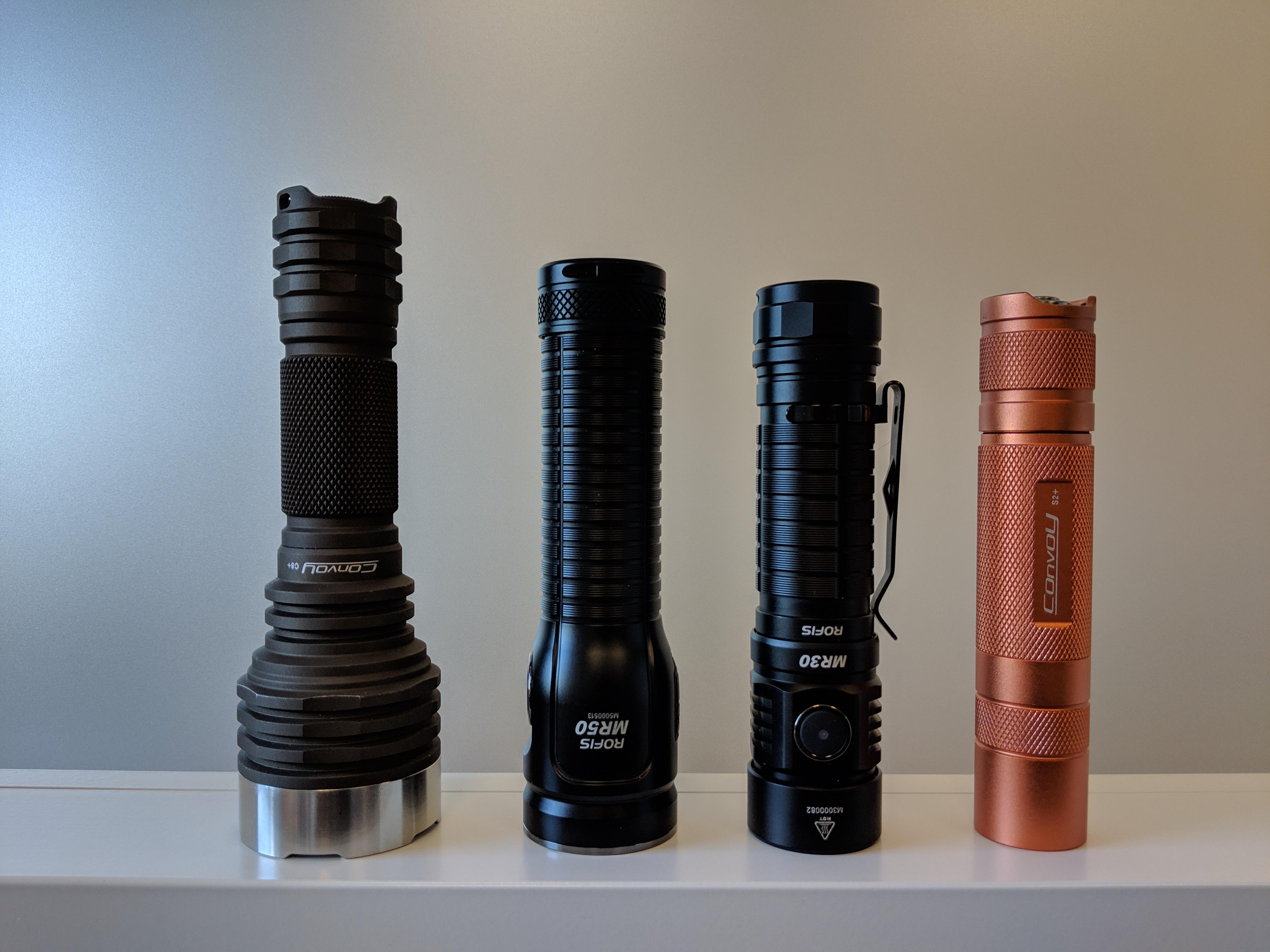 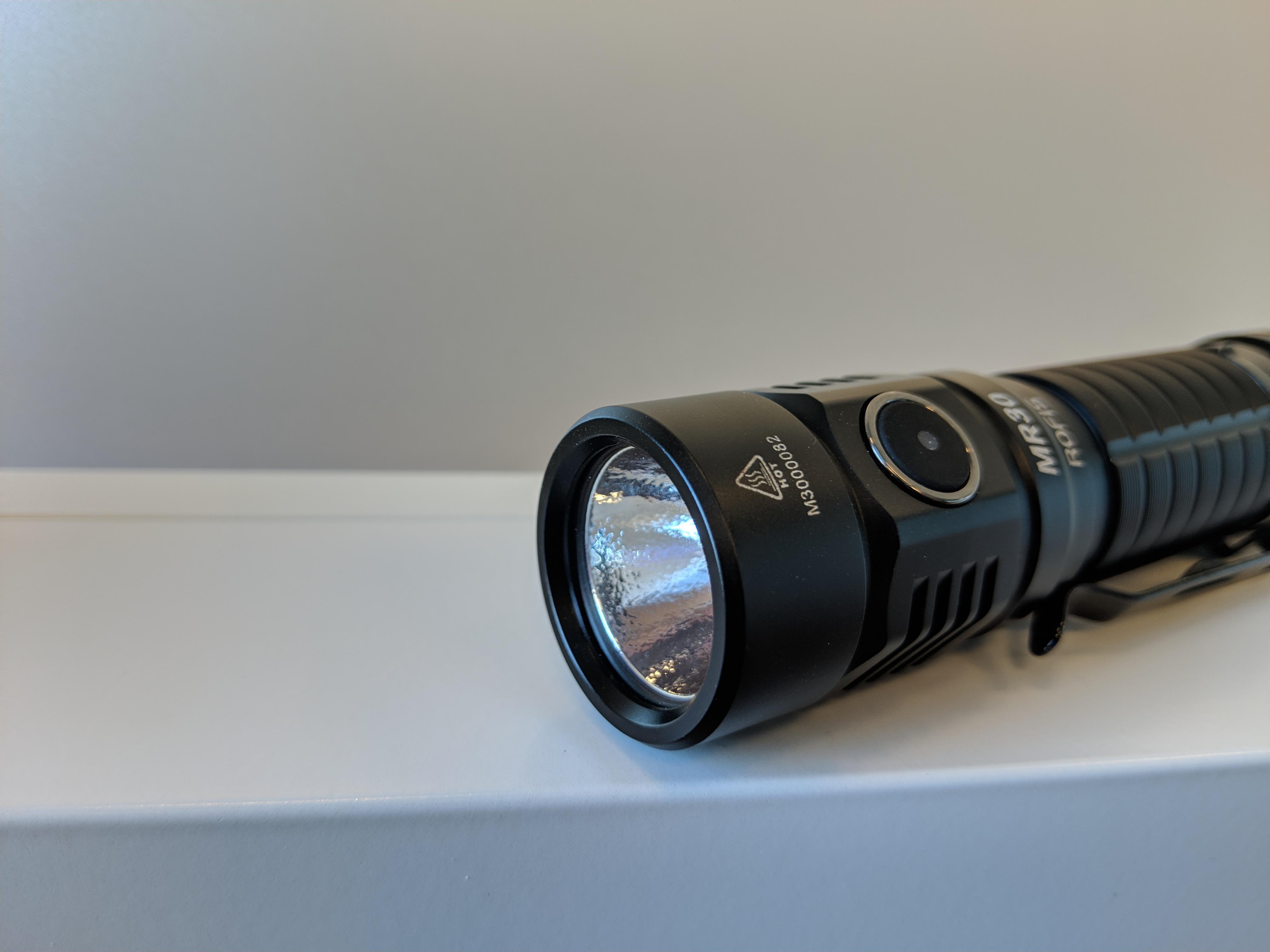 Starting at the head, this light has a smooth bezel that holds the textured reflector in place behind the window. The bezel on my sample is thread-locked, and whatever substance Rofis uses to hold their lights together must be made from mithril - I have never managed to unscrew something they didn’t want me to. Great news for durability, less so for modability. The bezel has the usual “hot” warning etched into it above the button, along with a serial number. 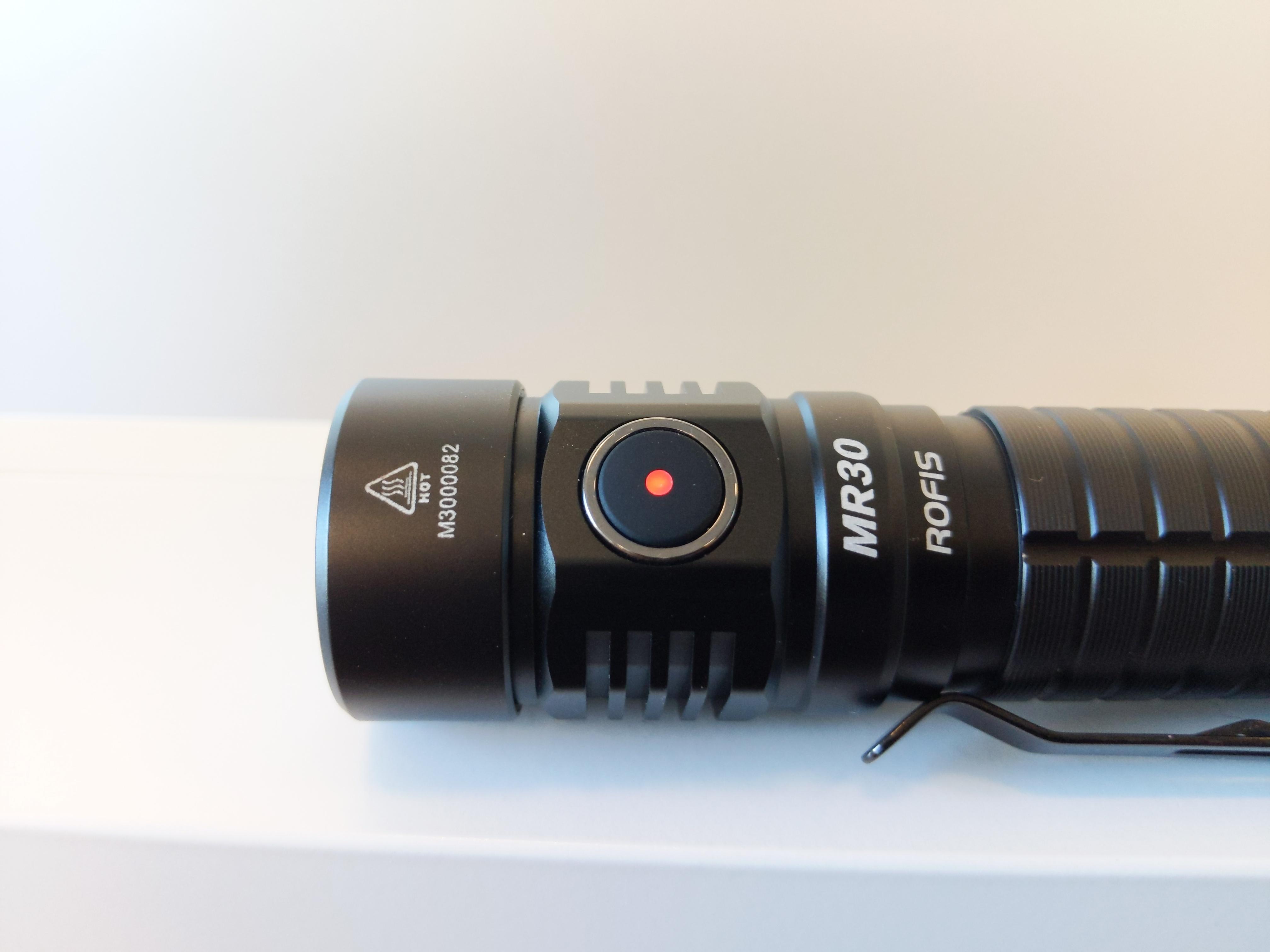 Below the bezel, the remainder of the head end of the light has an octagonal cross section, with fins cut into two sides. The back-lit button is held in place with a stainless steel retaining ring. The button is slightly proud of its bezel, but I didn’t have any issues with accidental activation. The hexagonal shape is enough to add some roll prevention to this light without increasing the diameter too much. 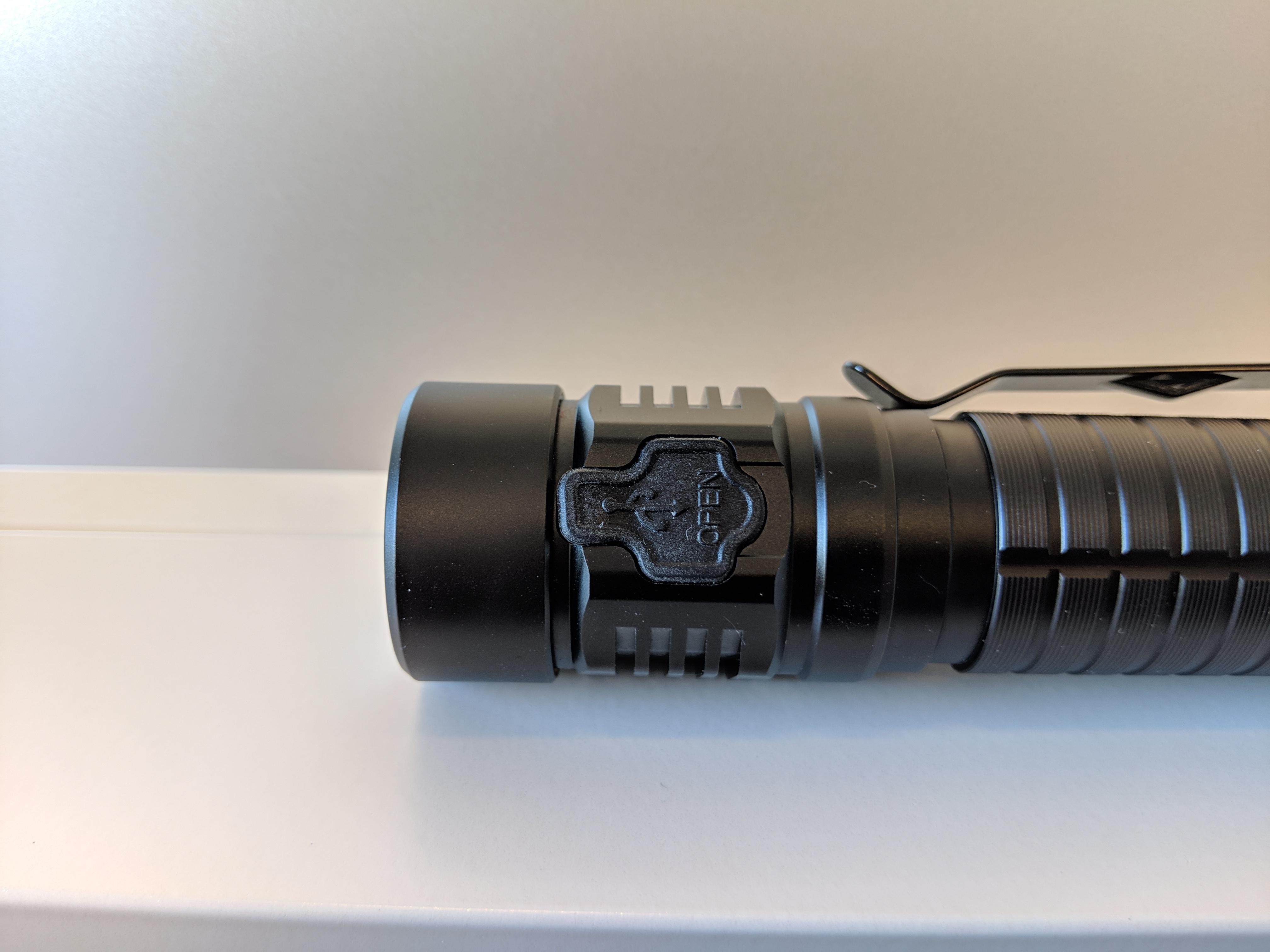 Opposite the button, a rubber dust flap protects the USB port from debris or light water ingress. 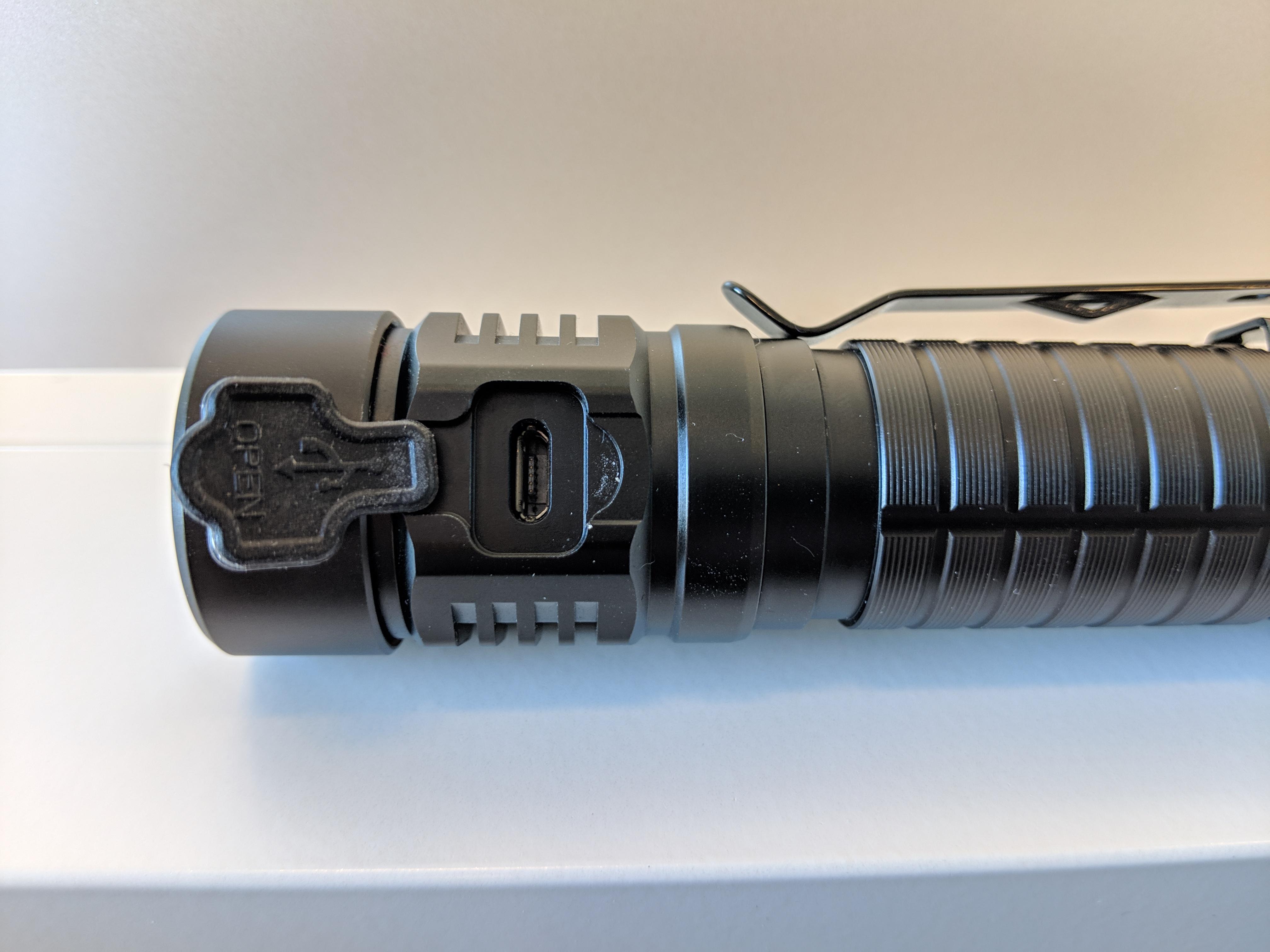 The tube is a separate part from the head of the light, unlike the MR50. Not that it matters in practise, because it’s held in place with the same adamantium alloy used on the bezel. Below the button, the light has the model and brand etched into the anodizing. The same ribbing is present for grip as this light’s larger brother had, a fine texture. It’s not too grippy, but I do like the way it feels. Both ends of the body tube have grooves where the clip can be attached. 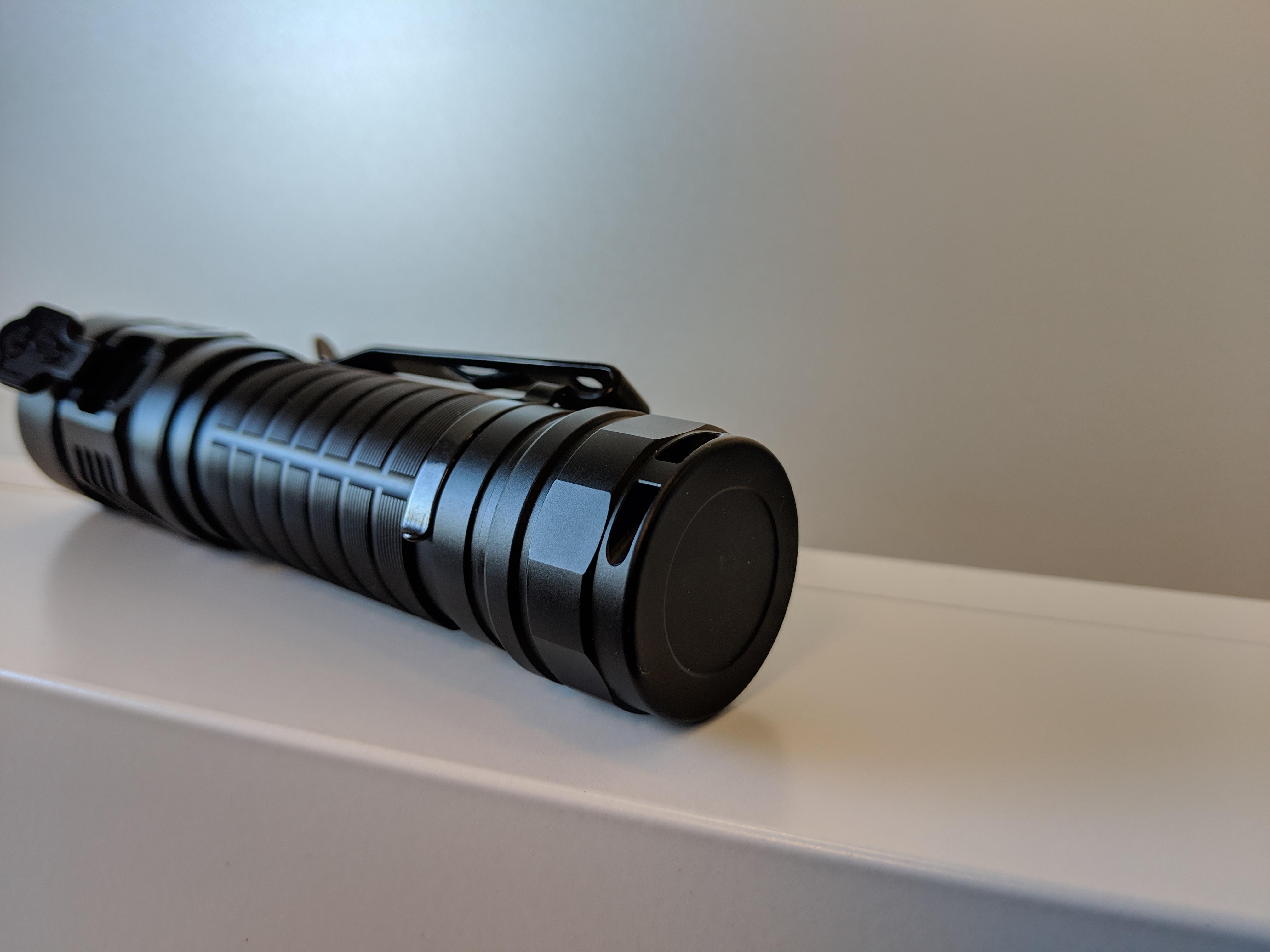 The tailcap is flat, which means the light has no issues tail standing. There’s some more edges around the tail to make the cap easier to remove and further prevent the light from rolling around too much. There’s also a lanyard hole in the tail of the light. 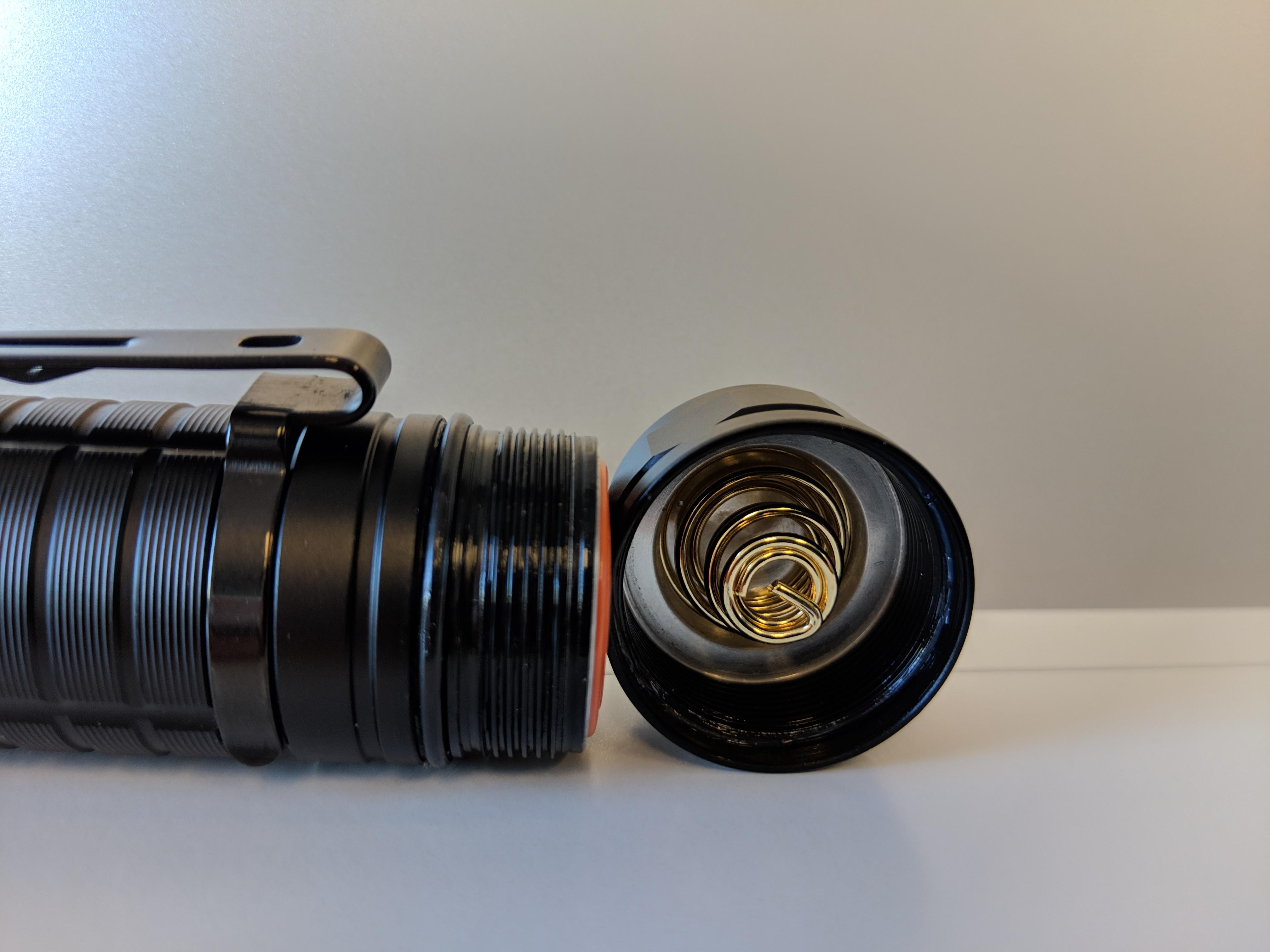 Inside the tailcap, the threads are anodized and square cut. Backing the tailcap off slightly will physically lock out the light. The tailcap has dual gold colored tail springs serving as the negative contact for the light. 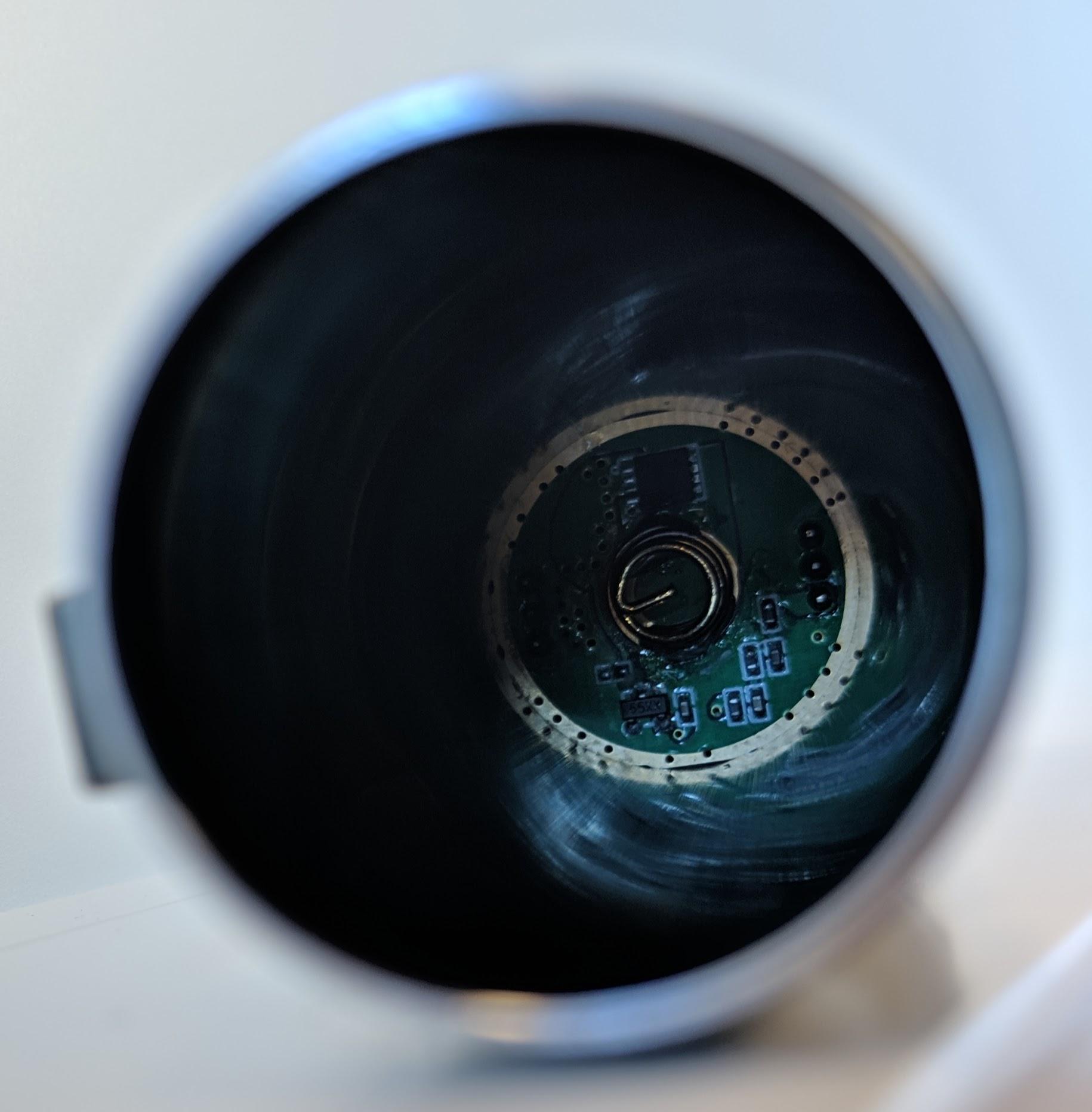 Inside the head of the light, you can see a single short spring that serves as the positive contact for the cell.

Once again, Rofis ships the light in quality packaging with a little window to show the product itself. Inside, there’s quite a bit of included kit. 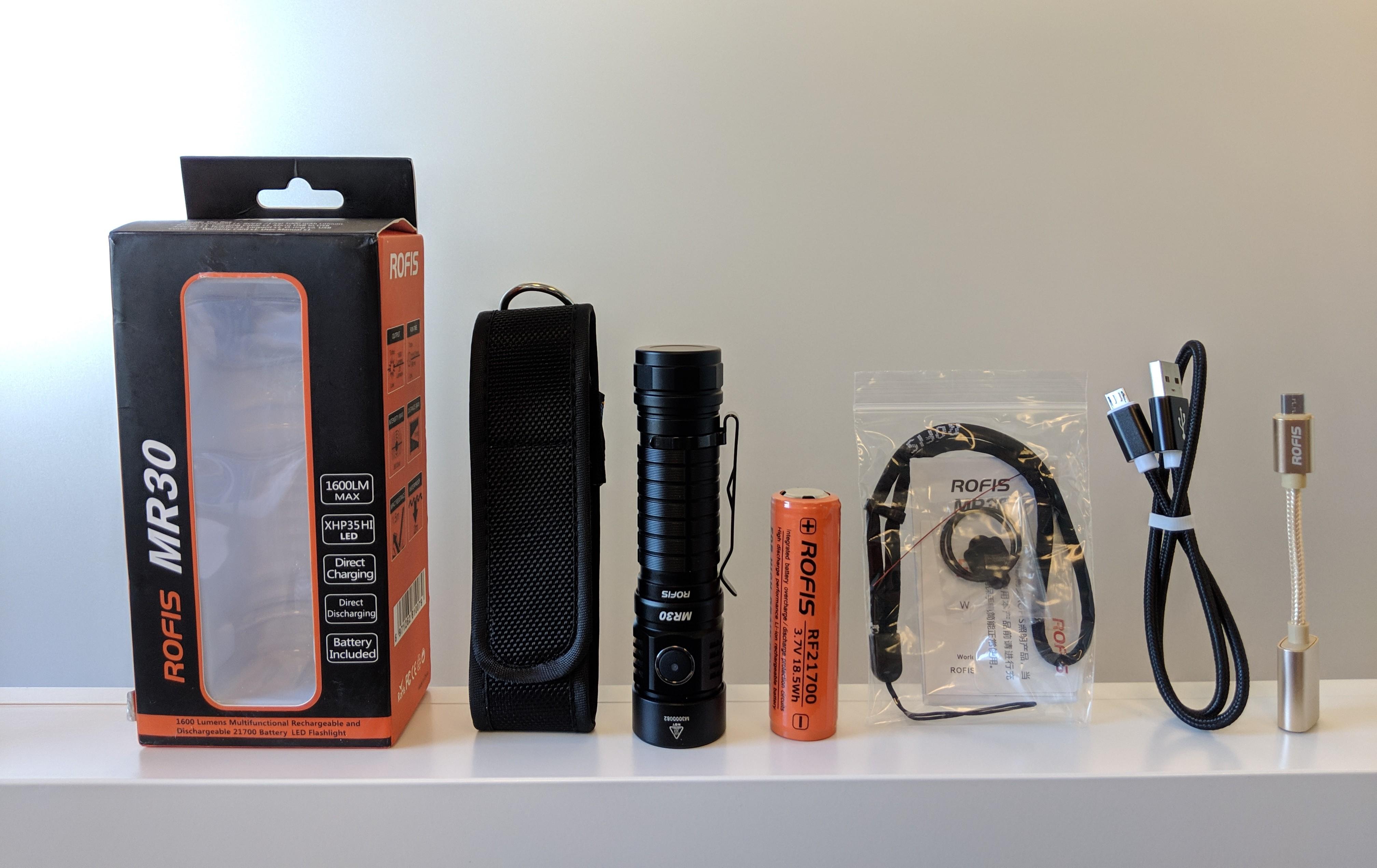 As I mentioned above, the machining on this light isn’t extremely grippy, but I still didn’t have any issues keeping it in my hand. I’m happy with the switch location and the anti-roll features as well. The clip can be attached for either head down or head up carry. Neither attachment point gives it a true ‘deep pocket’ profile, but setting up the clip for head down only leaves about 2 cm sticking out of a pocket - I find that reasonable for a light of this size. The clip is good overall, but sticks out slightly where it attaches to the body, and can catch when engaging on a pocket. 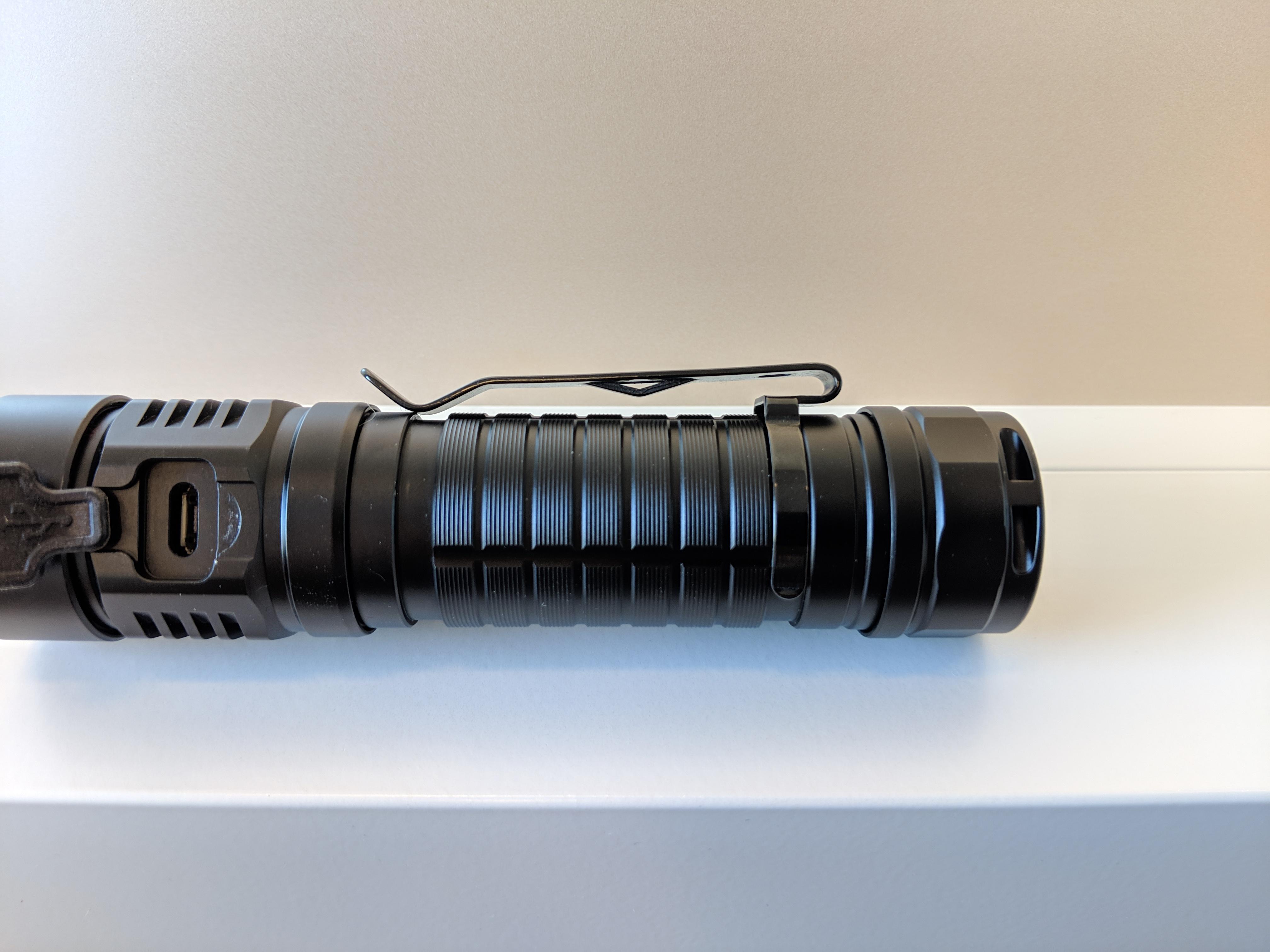 The light also comes with a sheath, which works equally well for head up or down carry, with the clip on or off. It’s a nylon sheath with elastic sides, and a hook and loop flap to keep the light in place. On the back, there is one belt loop that’s permanently sewn in place, and another that can be opened and is closed with a metal snap and a small patch of hook and loop fastener. There’s also a metal D-ring at the top of the belt loops. 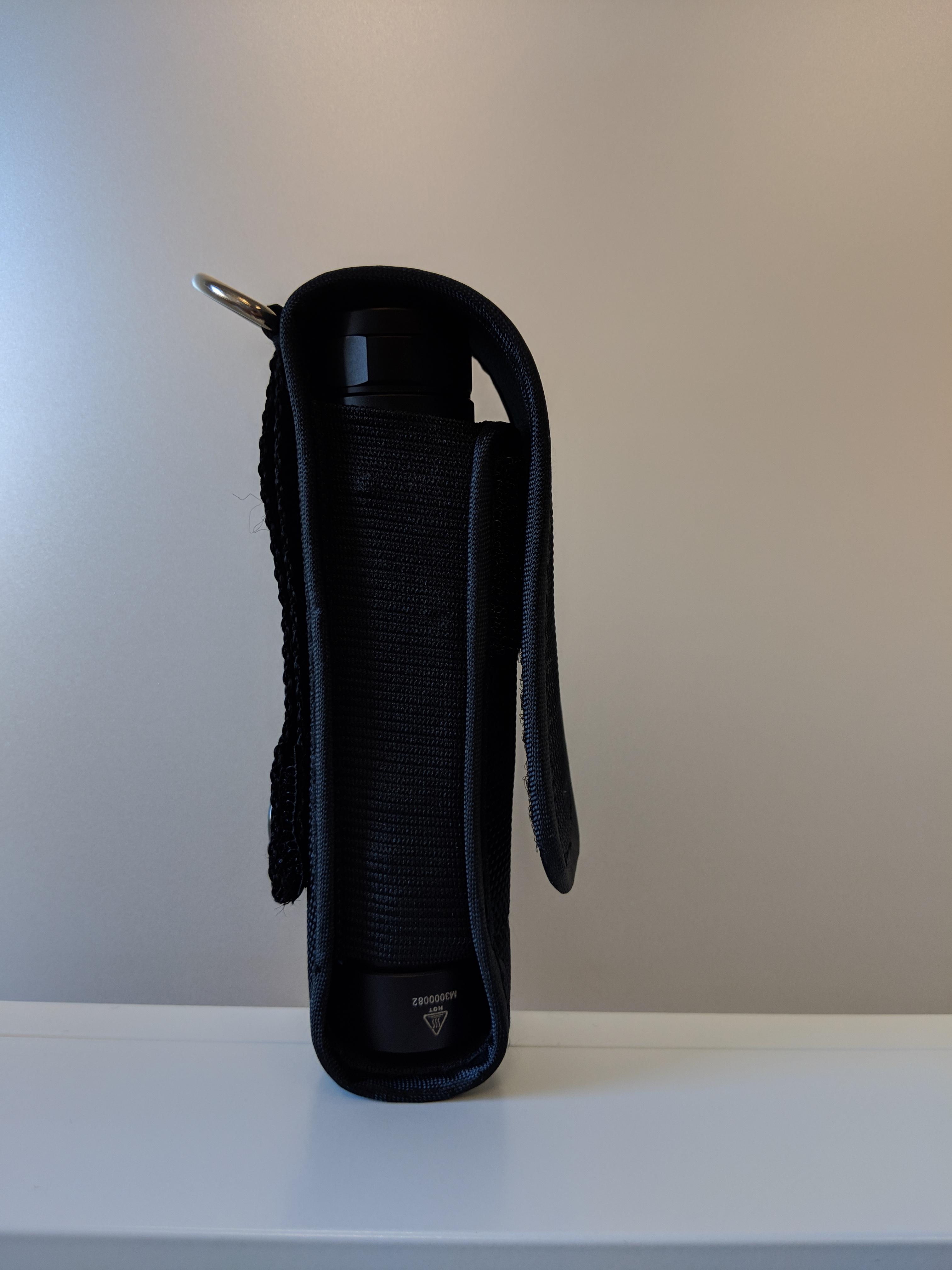 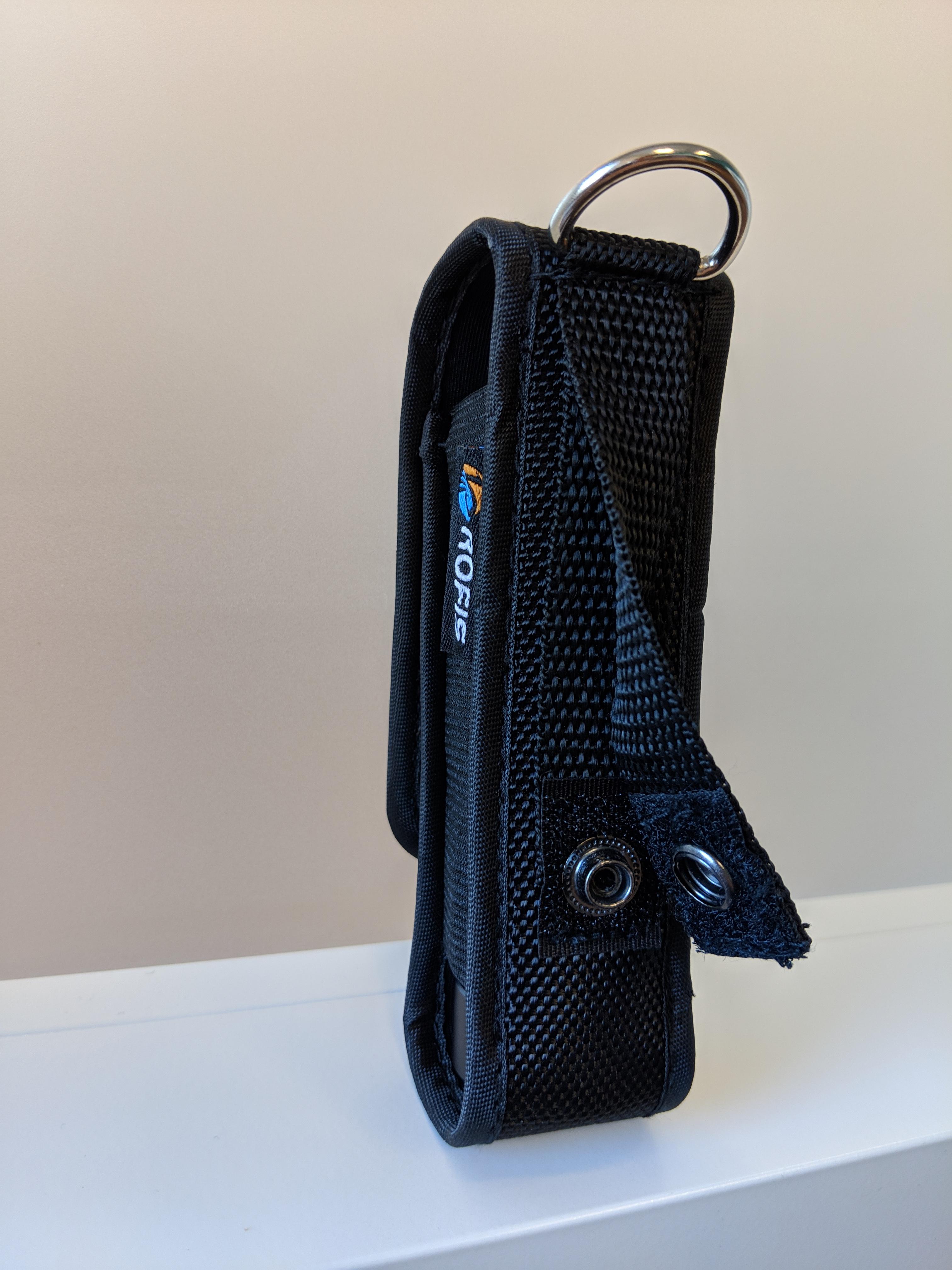 The tailcap also houses a hole to attach a lanyard, and one is included in the package. The kit also comes with a stiff helper to make it easier to get the lanyard attached.

There are three main modes to this light, with claimed outputs of 20, 200, and 750 lumens, as well as a 1600 lumen turbo and hidden strobe modes. Operation is fairly simple - a quick tap will turn the light on to the last mode, and another turns it off. While on, holding cycles through the main modes. There are a few special actions that can be accessed as well.
The basic functionality of this UI is good, but I would really like to see long press from off as a shortcut to low. The low mode is claimed by the manufacturer to be 20 lumens, and I wish there was a lower moonlight mode as well.

This light uses a cool white XHP35 Hi. Cree’s “Hi” series of emitters are favorites of mine, and this is no exception. There’s no tint shift across the beam, and the textured reflector results in a beam with decent throw and a very usable profile. Rofis claims the throw at 335 m. 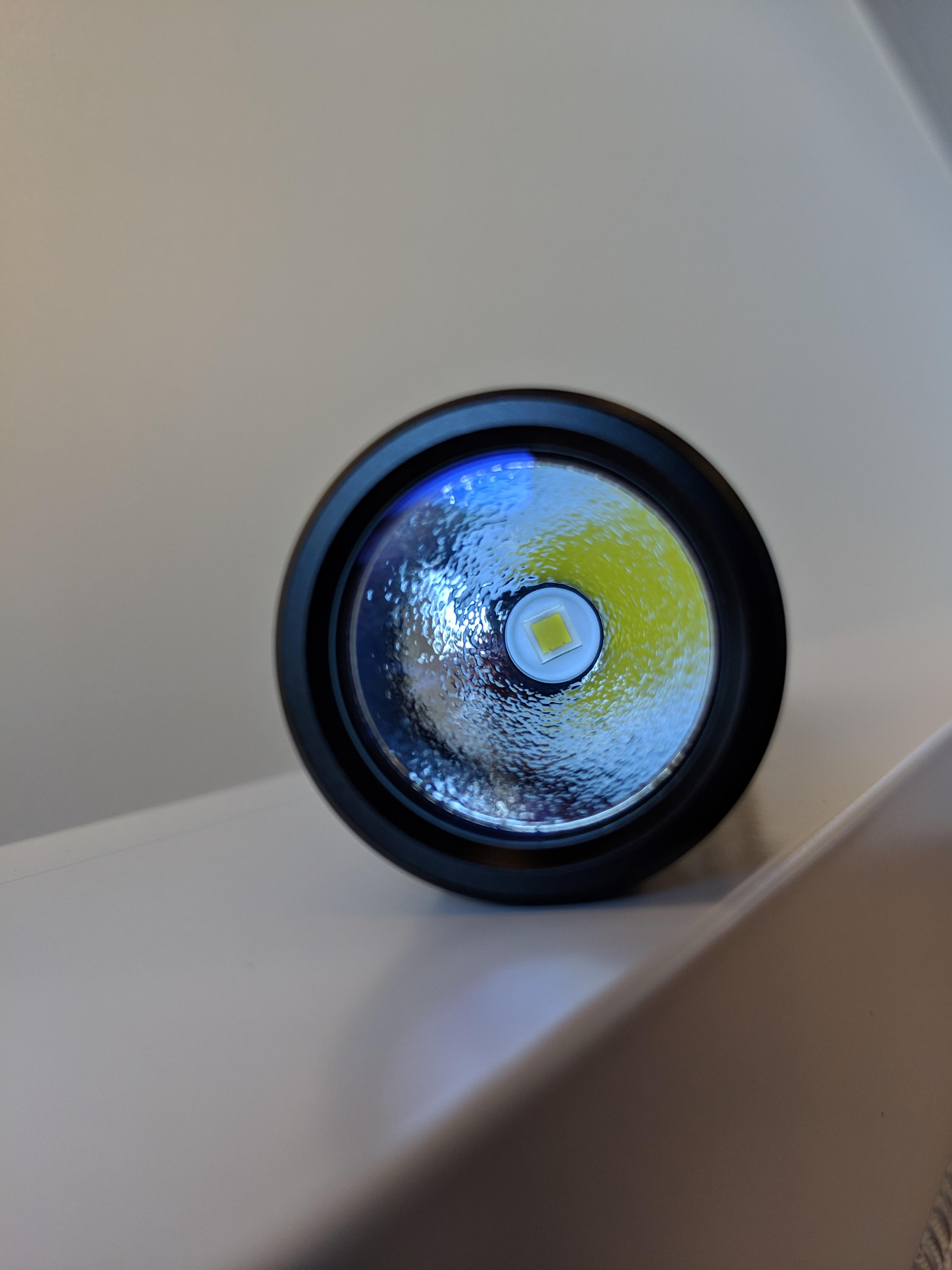 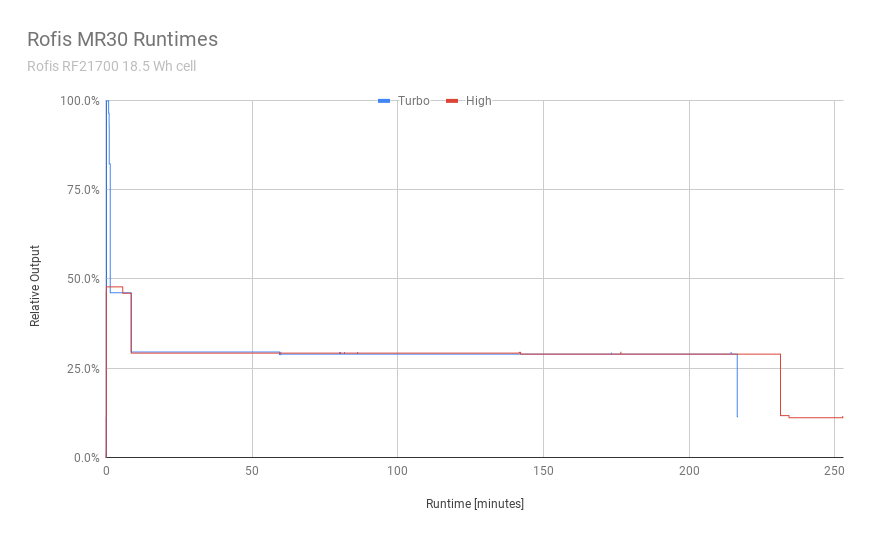 The light has timed step downs, as advertised by the manufacturer. The MR50 had issues maintaining turbo for the specified time without stepping down, but this MR30 matches it’s advertised runtimes without issue. I stopped both tests when the indicator LED was flashing red, but they were still about 10% relative output. As aggressive as the step downs are, I really like how flat the output is for the remainder of the run.

The charging cycle, as measured from the micro-USB port, shows a CC-CV curve, topping out at 1.75 A. When the charging was completed, the current dropped right to 0 without any trickle charging. While charging, the light can be used, but only as a single mode lamp - a single tap turns the light on, and another turns it off. There are no brightness modes, and long presses or other button actions don’t do anything special. This works the same way without the cell in the light as well.
While charging, the switch light will be solid red. One comment is that the indicator has the same behavior if the cell is not in the light, so make sure you haven’t locked it out before plugging it in. When charging completes, the indicator LED switches to green.
The powerbank of this light was tested at 2.0 A. The current delivery was steady, but the voltage sagged a bit as the cell drained. More thorough testing of the powerbank was done in the review for the MR50, which uses a similar cell and circuitry.
I would love to see a USB-C port used in future iterations of this light, as that would eliminate the need for this separate adapter. Note that power out will not work properly if the USB-OTG cable is plugged in to a device instead, i.e. the cable set-up is not reversible even though both ends are the same. 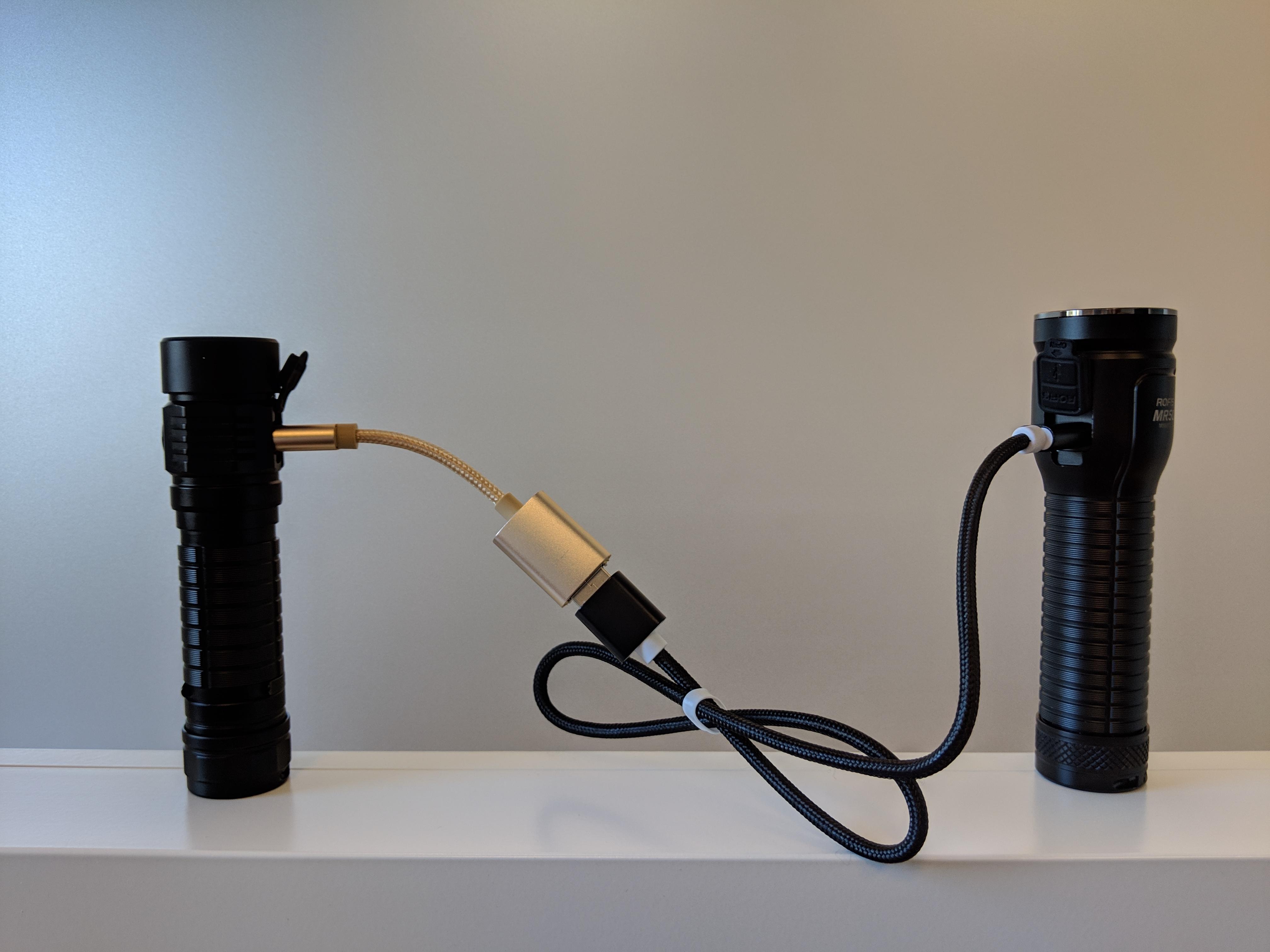