The light I have today is the YLP Panda 2M CRI. This is a dedicated 18650 headlamp with dual emitters, in this case the high CRI Samsung LH351D. It is controlled with two buttons on the top, and uses two optics.
It's worth noting that YLP also sells a number of variations of this headlamp - the Panda 2M is the same headlamp with the less desirable XP-G3 LEDs. If you're picking between the two, I would highly recommend the high CRI option.

Up until recently, high CRI headlamps have been hard to find. There's been a few very expensive Zebralights, and some smaller options from Nitecore. There's also been a few headlamps with a high CRI secondary light - but really no affordable options that use high CRI for the main, powerful LEDs. Thankfully, that's finally changing!
This headlamp is great. The UI is intuitive and isn't lacking any major features, it's comfortable to wear, and the light it puts out is gorgeous. The 'headlamp-y' form factor should also appeal to people new to 18650 lights, and it will be a big step up from the mass market options. 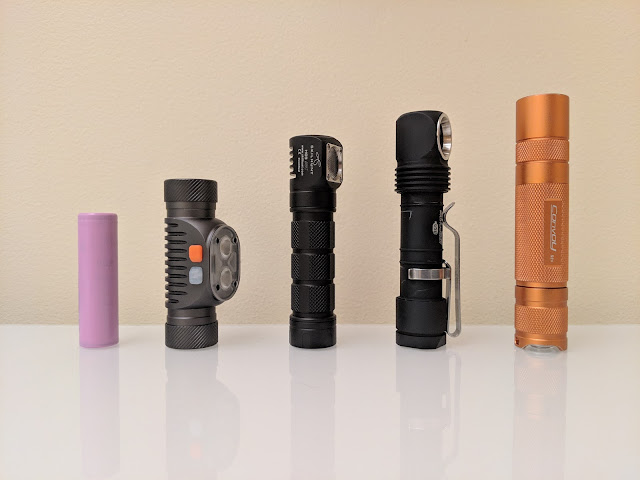 Here it is pictured next to an 18650, Skilhunt H03 RC, Armytek Elf C2, and Convoy S2+. Placing the optics next to the cell means it can easily be the shortest of the bunch, though it is a bit wider.

The body of this light is constructed of anodized aluminum in a great gunmetal grey color. Machining and anodizing are good, though there are some small rough patches in the fins. 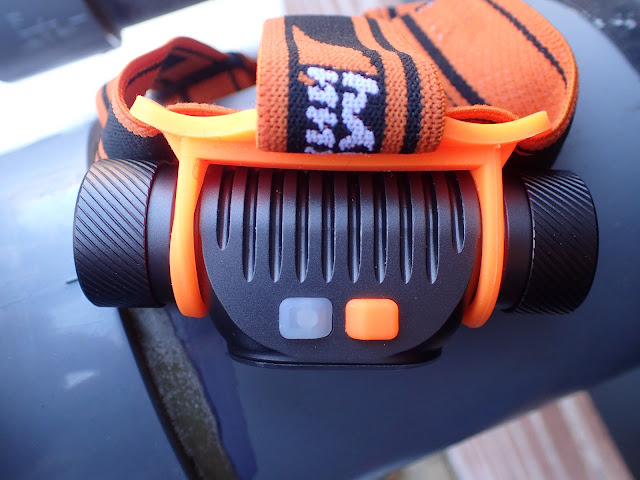 From the top of the light you can see the two switches, the fins, and the caps on either end of the cell tube. 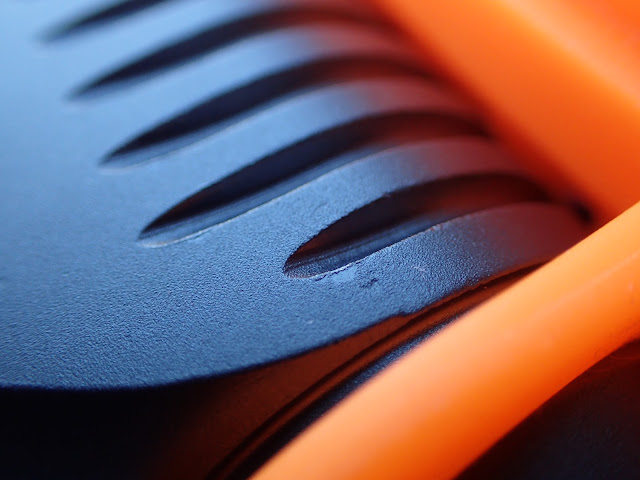 The fins themselves are a bit 'sharp'. They won't cut you or anything, but they could have used a bit of finishing on the edge if I'm being totally honest. Since this light is designed as a headlamp, they likely won't ever touch anything other than their silicone holder, so this really shouldn't be an issue - but I felt it was worth mentioning. 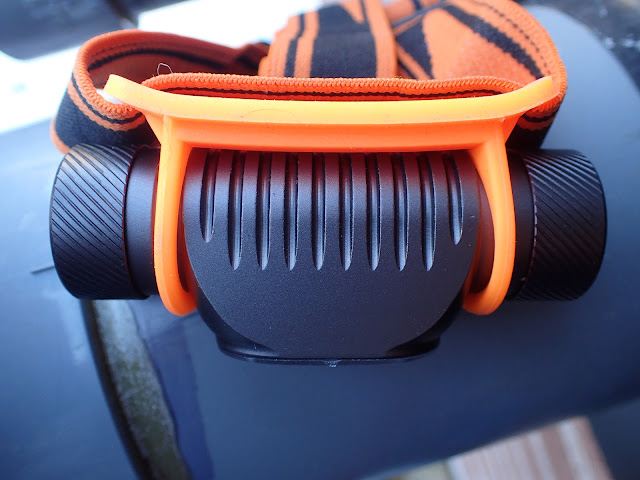 The bottom of the light is a mirror of the top, minus the two switches. 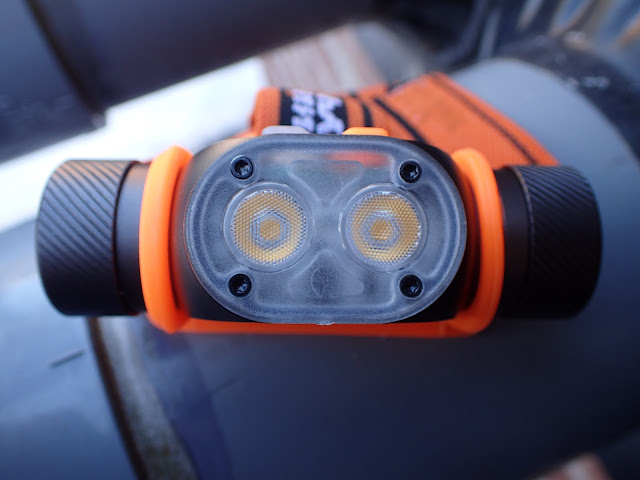 Around the front, a plastic cover is held on with 4 Torx screws, and keeps the two TIR optics secure. The plastic cover protects the lenses themselves, and the manufacturer includes a spare in case it gets too scuffed. 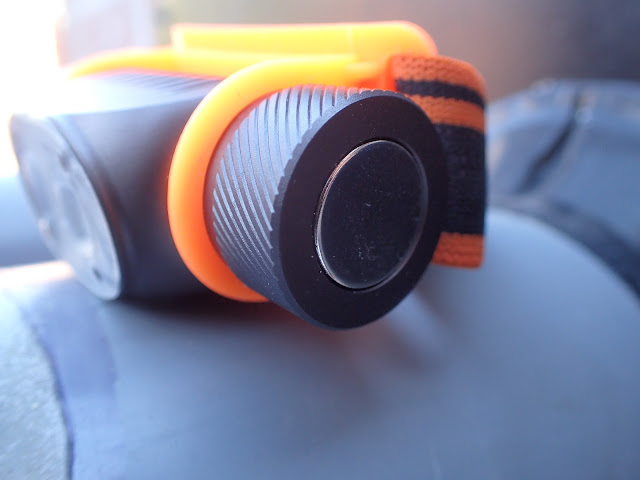 The cap at the right end of the body is not readily removable, and houses the magnet. 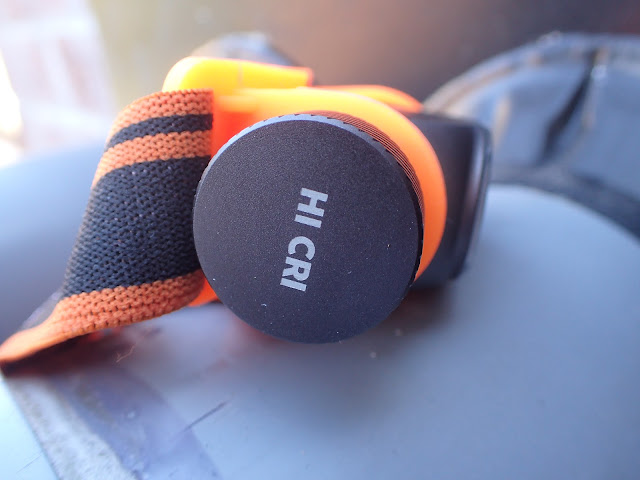 Around the opposite side is the cap for battery replacement. Detailing around the cap makes it easy to grip for cell changes. The cap is etched with a "HI CRI" label, which is the only marking on the entire light. 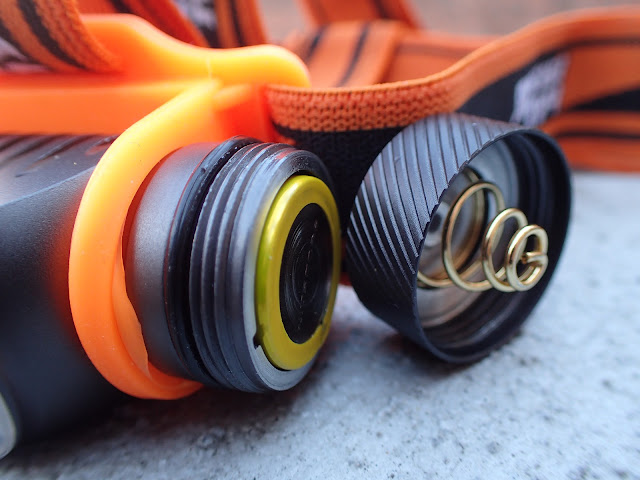 Unscrewing this cap reveals the thick construction of the body tube. The threads here anodized, which means the light can be physically locked out from accidental activation by slightly loosening the cap. There's a sticker inside indicating the polarity of the cell, which gets inserted positive end first. The contacts with the cell at both ends are springs. 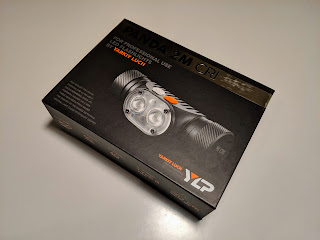 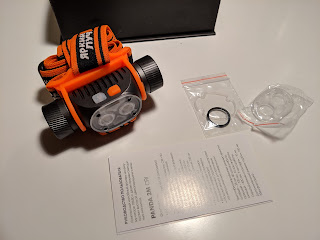 The light ships in a snazzy black box that seems to be customary for YLP, as their Sherp S15 had similar packaging. The box closes with a magnetic flap on the front, and even features the product name in foil print. Inside, you'll find: 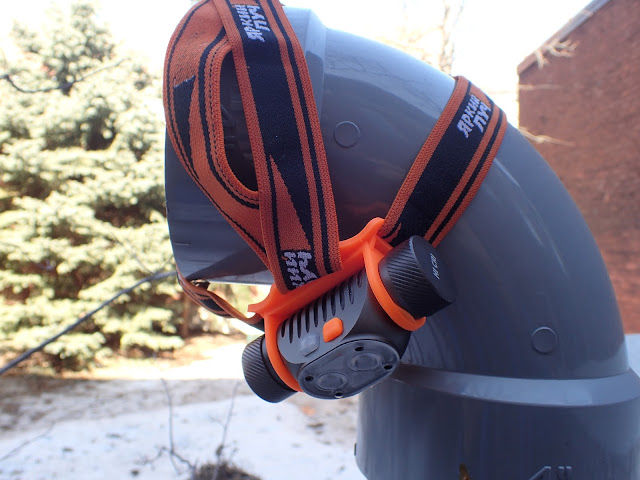 This light probably isn't designed to be used without the headband, which will be the main way to keep it where you want it. The straps come assembled, which is welcome after struggling with the options from Armytek and Skilhunt. The elastic webbing used feels a bit less premium than some others, but it is comfortable and stays in place. The holder for the light is made of an awesome orange silicone. It's a bit stiff to adjust the angle of the lamp, but it's easily doable with one hand.
My one complaint is the top strap, which is far too long. Even with my giant head, I had it tightened almost all the way. This will be less of an issue if it's used with a hat or helmet. The straps do not have any reflective or grippy features. 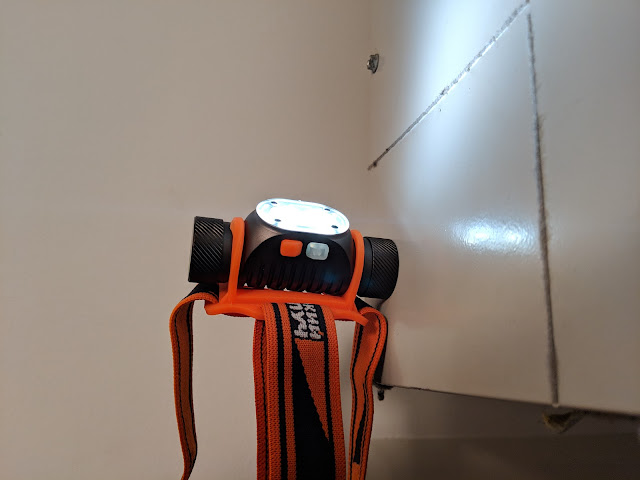 The light also has a magnet in the 'tail', or the right hand side of the headlamp as worn. This is useful for hands-free use, even with the headband still attached. The magnet does not seem to be readily removable, which I know some compass-users will object to. it's plenty strong enough to hold the headlamp in any orientation.

The user manual does a great job of going over the features of the UI, so as usual I'll go through the basics of using the functions I used most.

This UI gets all the main points right. Something it adds that I've come to love is the ability to access turbo as a momentary mode from on. This is great for those 'what's over there?' moments, and avoids having to navigate back to the mode you were previously in.
The manual also points to the web version, which has additional configuration available.
The only feature missing from this UI that I can think of is the ability to use red as a constant mode. That's not a feature I look for myself, as I find dim white light to be equal or better in all aspects, but I know some desire that capability.

This is the real selling point of this headlamp. The light uses two Samsung LH351D emitters, both behind TIR optics. Maukka did extensive testing of this light (linked below), and his lab equipment confirms what my eyes see - it looks great. The high quality light makes it very easy to tell the difference between similar colors that tend to get washed out on a forest floor. Enthusiasts already know how great high CRI lights are, and this is no exception. 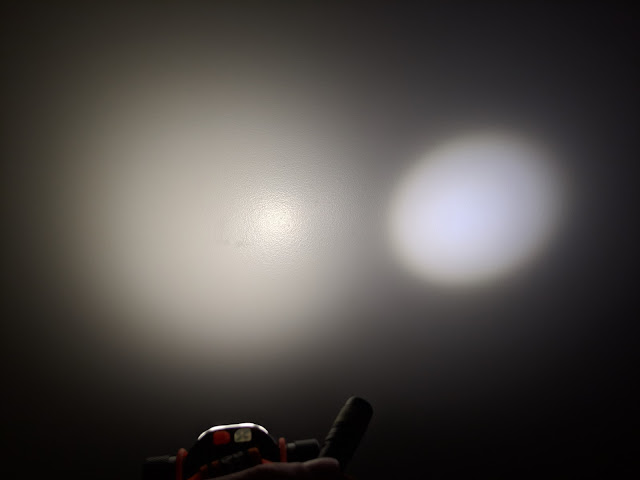 That's the beam compared to a 4500K E21A in a JetBeam JET-μ The beam is quite floody, but the turbo boost is more than enough for most hiking needs. 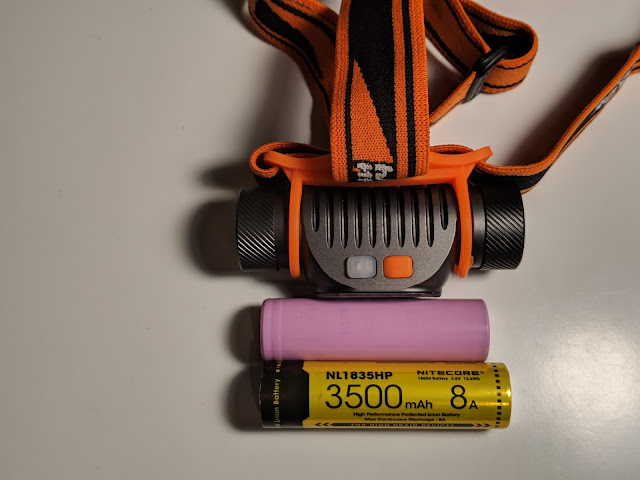 The light takes a single 18650 cell. Everything from a flat top 30Q to a protected Nitecore button-top cell measuring 69.7 mm worked without issue. 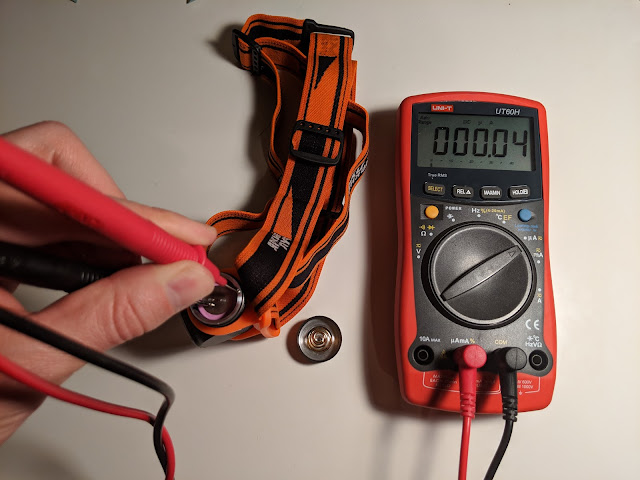 Standby current was measured at an astoundingly low 0.04 μA. A reading this low means the standby drain will not have any discernible impact on the cell life.

Runtime was tested using a Samsung 30Q. Both tests were left to run until the light shut off, at which point cell voltage was measured at 2.8 V (high runtime) and 2.9 V (medium) after settling.
On both high and medium, the output was quite stable without any drastic stepdowns. On high the light lasted 2 hours and 43 minutes, and on medium it lasted 9 hours and 20 minutes. Both these runtimes are just slightly below the manufacturers numbers, which makes sense given that they were tested with a 3000 mAh cell. A cell around 3400 mAh should have no issues reaching the stated times. It's worth noting that the highest constant mode still gets close to 3 hours of stable light, which is huge. The medium mode lasting 10 hours is an excellent length for longer hikes, and will also easily last through an 8 hour work day.

This product was provided by the manufacturer free of charge, in exchange for this review. I was not paid to write this review, and have tried to be as unbiased as possible.
Manufacturer's product page (the only place i could find to purchase this light)
Maukka's review with detailed measurements of light quality
Headlamp High CRI Red light Samsung LH351D YLP