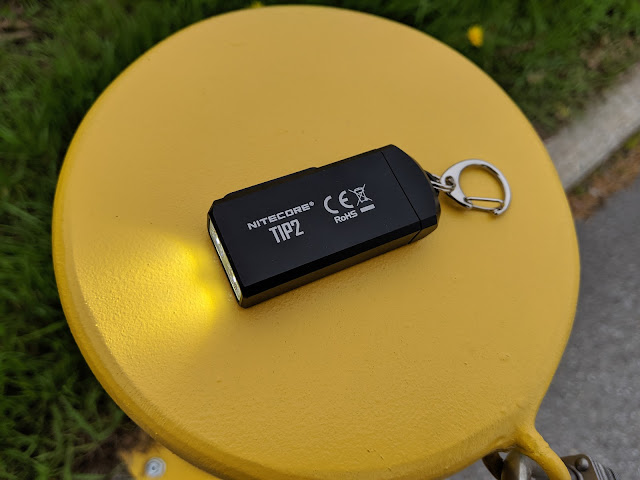 The TIP2 is Nitecore's latest high output keychain light. This one has two emitters behind a TIR, two side switches along the edge, and built in micro-USB charging. With an advertised output of 720 lumens, this is their second highest output light in the series.

This is my favorite keychain light from Nitecore yet. The milled body looks and feels extremely solid, and very high quality. The magnets are convenient, and using them to hold the light on a keychain is just plain smart.
Although the UI isn't what I would normally want, it works very well for a small light like this. The only major downside for me is the LEDs - the XP-G3 has a reputation for tint shift in the beam, and this is no exception. If you aren't picky about that, this will be a great option for you.
I certainly hope Nitecore keeps making more keychain lights with this style of body.

The light measures 58 mm long (including the cap, but not including the keychain loop, 25 mm wide and 13.3 mm thick. It weighs 40 grams with the keyring and clip removed. 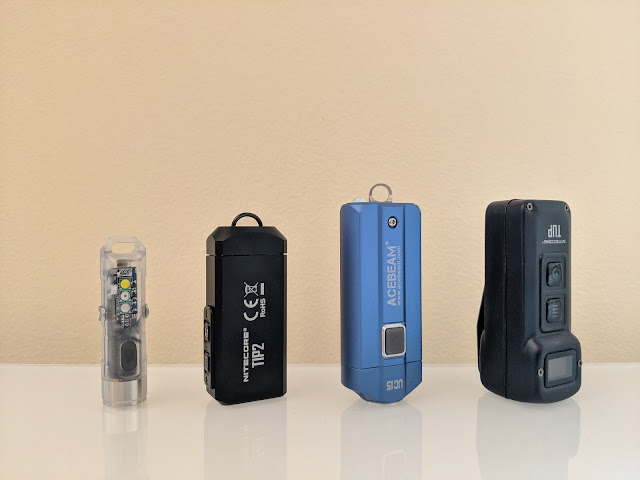 To help visualize the size, here it is lined up next to the Rovyvon Aurora A8, Acebeam UC15, and Nitecore TUP - all extremely high output lights for their tiny form factors.
The TIP2 actually has a lot of similarities with the Rovyvon Aurora - integrated pouch cell, similar length and thickness, long press for on, momentary turbo, and a charge port in the tail. I like to think of this like two Auroras glued together.

As far as I can tell, this is the first of the keychain series from Nitecore that is milled out of a solid chunk of aluminum. Early models were all plastic, and the TINI and TUP were stamped. The result is that the heft and solidity are great. 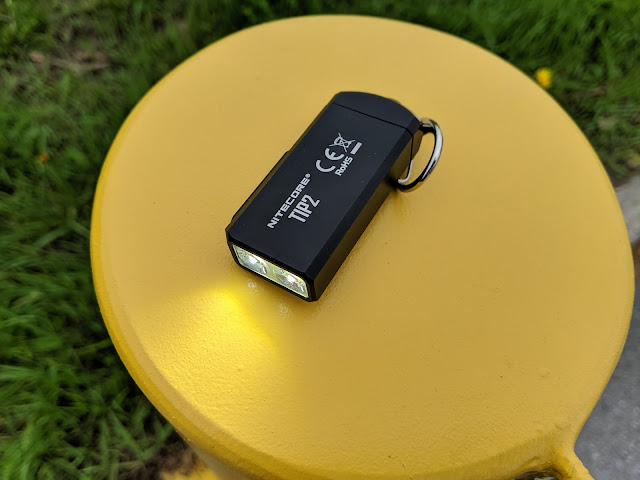 Starting with the head of the light, you can see the TIR nestled in the bezel/body, with no apparent seams. The top side of the light has the brand, model, and regulatory info etched into the anodizing. This is the only marking on the entire light. The bottom edge and opposite side are bare, and the entire body is one piece of metal. 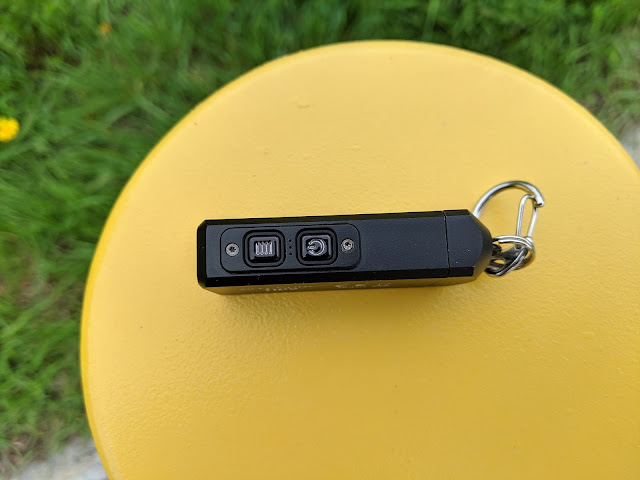 At the top of the light, a small aluminum plate holds the two switches in place. Between the switches, three tiny holes are drilled to let the indicator LED shine through. 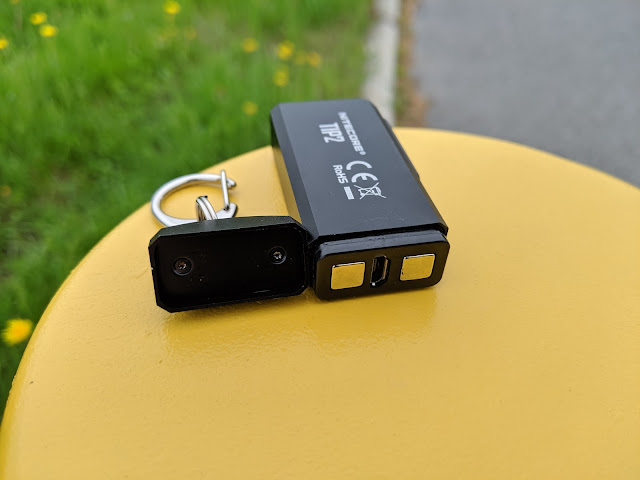 The tail is a separate piece, held on by two strong magnets flanking the micro-USB port. There's no evident way to remove these magnets. There's not much of a seal to keep water away from the port, but Nitecore states the light is IP67 water resistant. In any case, I'm sure normal use in any weather won't be an issue. 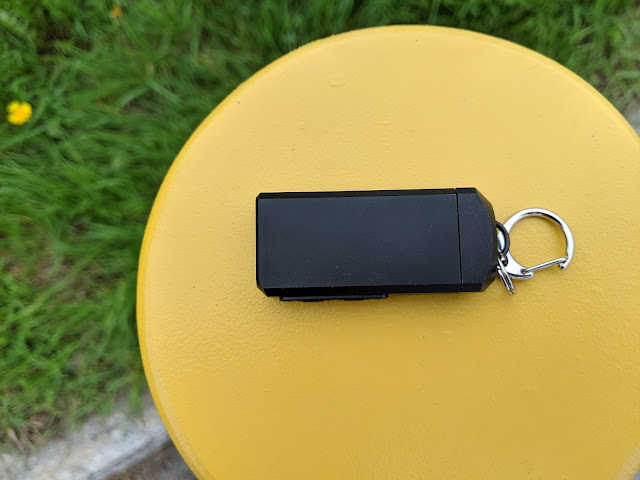 The semi-circular loop on the tail can't be removed, and comes attached to a clip. 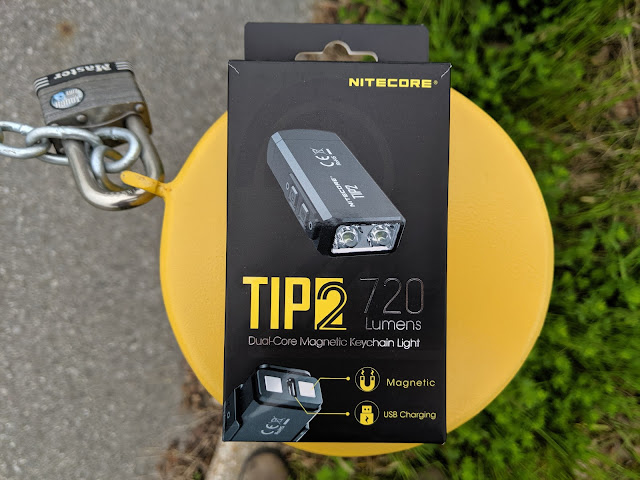 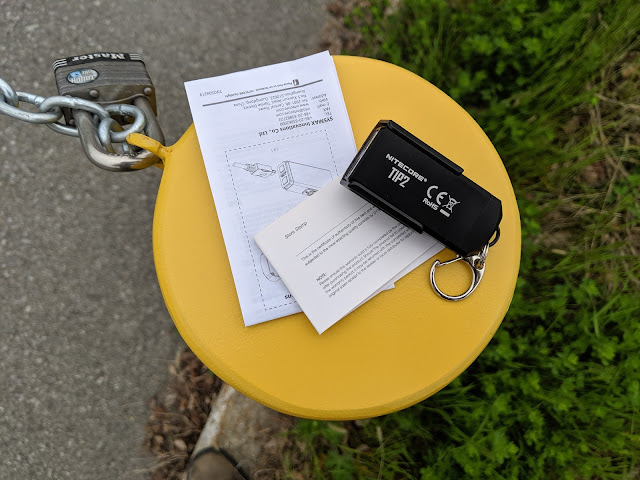 The light comes in a black box, and includes:

Note that a micro-USB cable isn't included, but you probably have enough of those flying around by now.

Ergonomics are great. As usual, I don't like holding on to tiny lights for very long periods of time, but the solid aluminum body and nice chamfered edges are great. I also really like the button placement on the edge of the body. 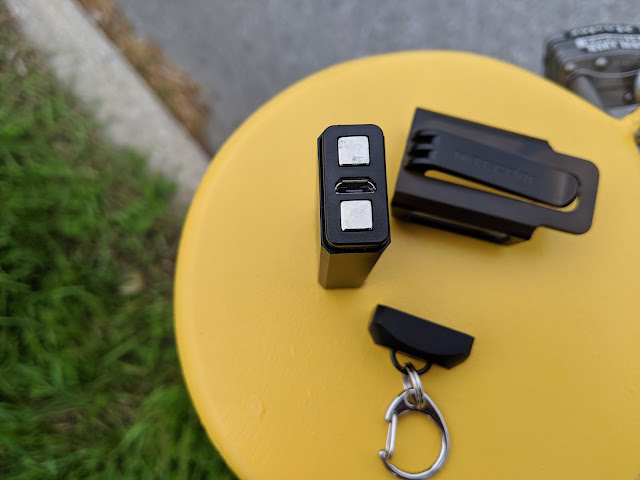 The light includes a pocket clip, magnets, and a keyring to carry it around. I really like the magnetic closure on the keyring - being able to pop the light off when you want to use it is very convenient. 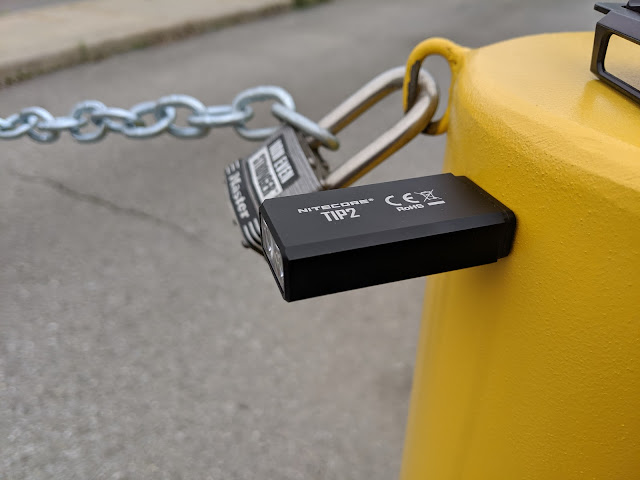 The strong magnets have no issues holding the light in place. 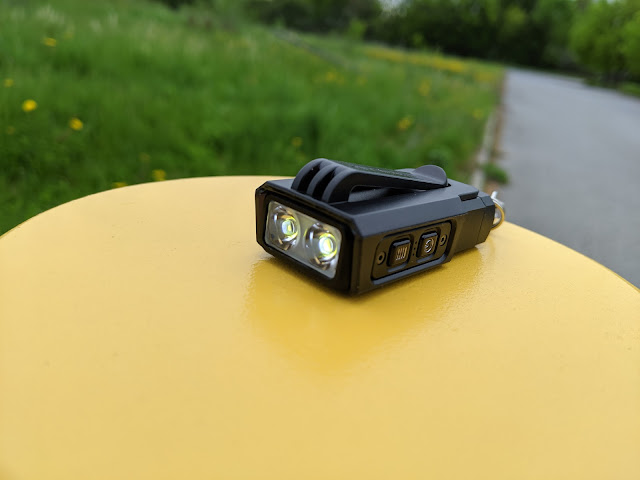 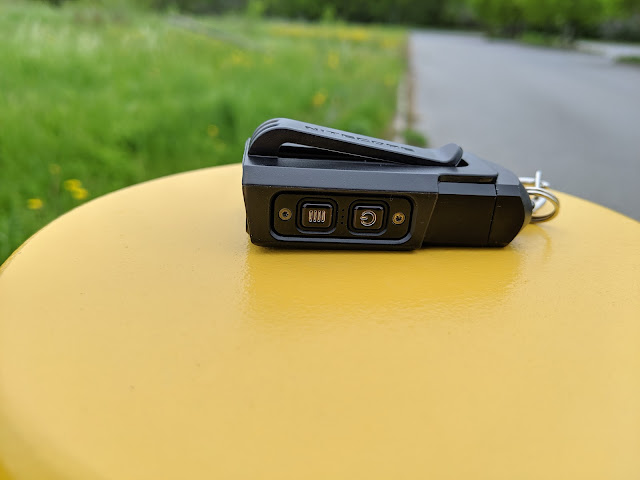 The included clip wraps around the light, protecting it from scratches and making the buttons a bit more recessed. The clip is deep, and leaves the emitters pointed forwards if used on the brim of a hat. The plastic doesn't feel as durable as some others I've used, but I didn't have any issues with it.

Advertised modes for this light are low, mid, high, and turbo at 1, 30, 200, and 720 lumens. Turbo is treated as a true turbo, and can only be activated momentarily. The interface is controlled by the power and mode switches as follows:

The demo mode shuts the light off automatically 30 seconds after the last button press, whereas daily mode leaves it on until turned off. Unlike on the TUP, there is no way to extend the demo timer without changing modes.
I really like that there's momentary access to turbo here. I also like the actually low low mode, and the spacing overall is good. As much as I usually don't like long press to turn a light on, it makes sense for a keychain light where avoiding accidental activation is key. It's also nice that there aren't any strobe modes making things difficult.
Some people are upset about the turbo mode being momentary only, but I think that's a little ridiculous. Getting 700 lumens out of a light smaller than a tictac box is phenomenal, and anyone who thinks the cell or thermal performance could handle that for extended periods of time needs to check their math. 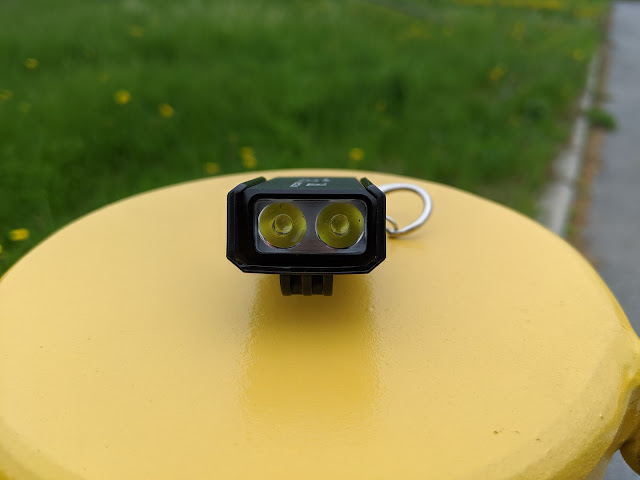 Two XP-G3 emitters behind a custom TIR optic are what's used for this light. 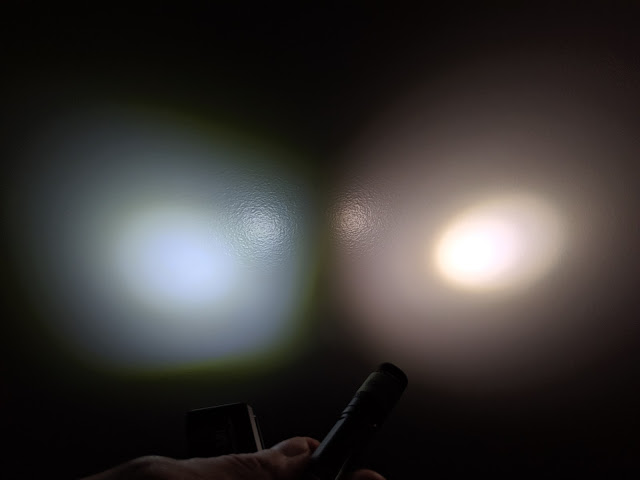 Compared to a 4500K Nichia E21A in a Jetbeam Jetu, the tint shift across the beam is clear. To my eyes, it goes from a yellow hotspot, to a blue corona, and then to an even more yellow ring around the perimeter of the beam. The emitter selection here is the main drawback of this light, and I would love to see Nitecore offer a high CRI model as they have in the past, with either Nichia 219C or Samsung LH351D emitters instead.

The light is powered from an internal cell, claimed at 500 mAh.

On high, output is nice and stable until it starts to climb for the last few minutes. It stayed on for 86 minutes, 11 longer than the time listed in the manual.
Medium output stays steady for a little over 5 hours before it starts to slowly drop, finally falling below 10% after over 7.5 hours. This is a bit less than the claimed 8 hour runtime, but not by much.

To charge the light, just plug a micro-USB cable into the port on the light.

Both test showed charging a bit under half an amp drawn from the USB port, and took about an hour and 45 minutes to fill up the cell. There's some small drain when the charge is complete, but that's likely just to keep the indicating LEDs lit.

The wording for this section was chosen very carefully - this is a teardown, not a guide. If you do this, you could very well break your light and will definitely void your warranty. I do this so you don't have to, and to show you what's inside this impressive little package. 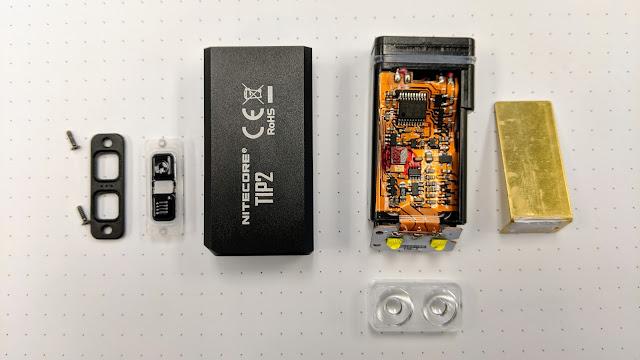 To open the light up, I first removed the two T4 screws holding the switch place in. Once that was out, I could remove the switch covers and the silicone gasket sealing water out of the light. Once the switch covers are removed, pushing gently on the TIR popped the entire assemble out the rear end. The brass piece is a heat spreader, seated under the MPCB and in contact with the aluminum body to help manage the thermals. 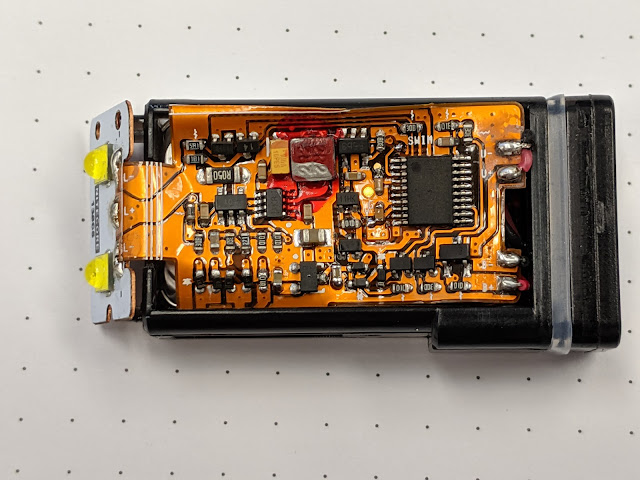 The entire driver is on a flexible PCB. The wires at the bottom lead to the pouch cell on the other side and the charge port. There's a nice o-ring sealing water out of this end, and another at the head. I was quite impressed by the seals on this light. It does look like the solder points on the top right are sitting a bit high and may come in contact with the body of the light - it's anodized inside, but I would have preferred for that edge of the PCB to be tucked in like the lower edge is, just to avoid any unwanted shorts. 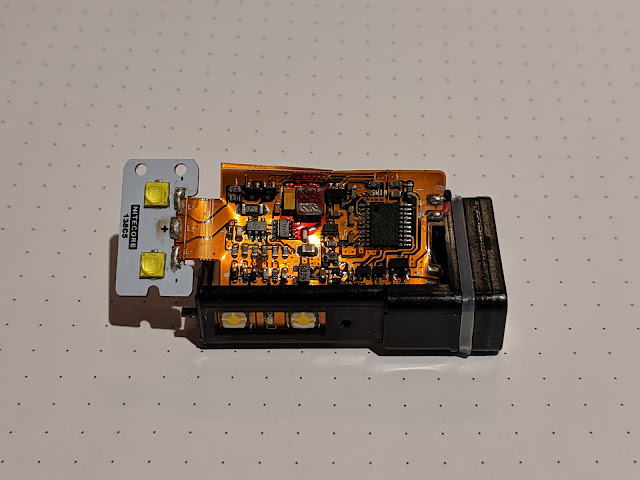 This construction allows them to bend the driver around the cell, and have the buttons placed on the same PCB. 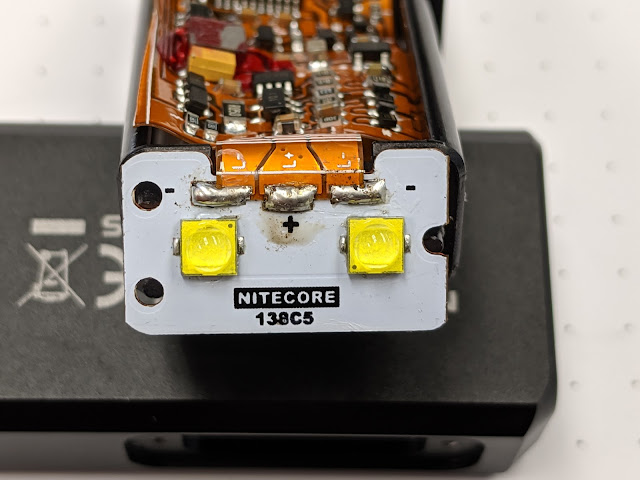 The LEDs are on a separate MPCB, again for better thermal performance. Interestingly enough, there are two negative contacts going to the driver, but these are connected to each other on the MPCB. It's possible they can be addressed separately by the driver, which would mean that special editions with two independent emitters could be possible - that's what Nitecore did with the THUMB LEO in the past. 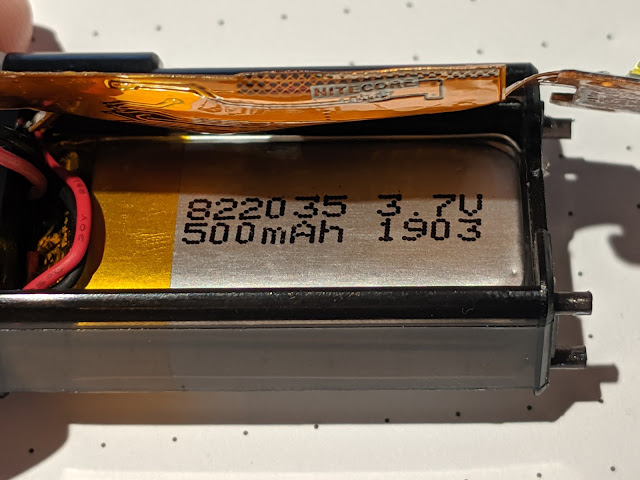 Beneath the driver, the 500 mAh cell takes up almost all of the internal space in the light. 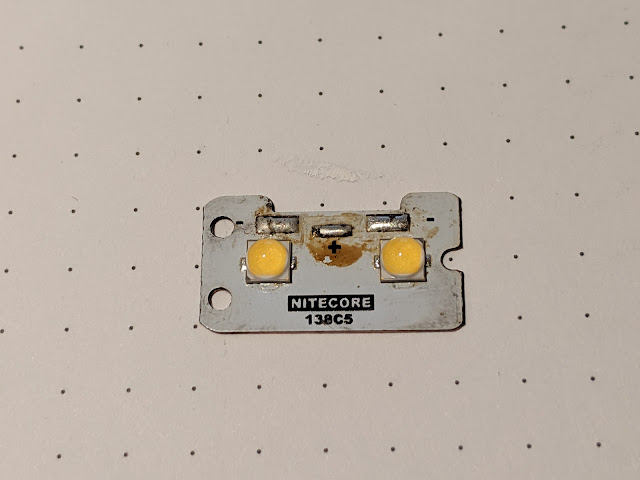 Since I was in there already, I de-soldered the MPCB and reflowed some 90 CRI 5000K Samsung LH351D to make my own TIP2 CRI. 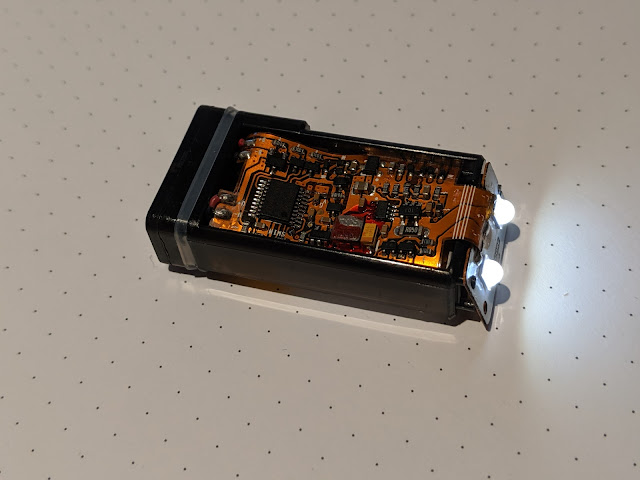 Soldering the MPCB back onto the driver is a bit touchy, and I think I separated the Kapton from one of the two negative traces a bit - but I was able to get it back together. and working. 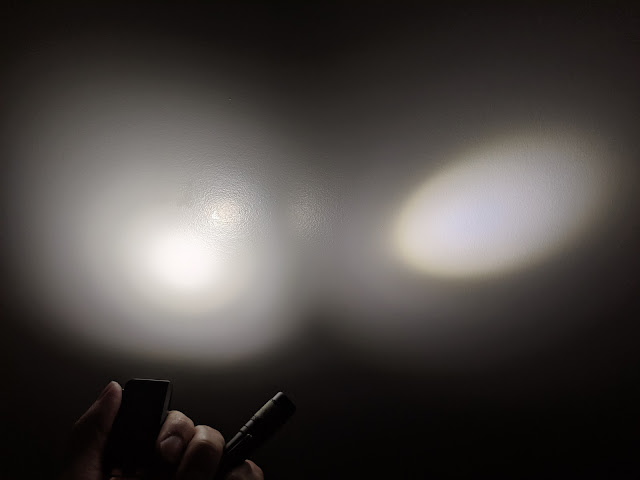 Compared to the original XP-G3, these LEDs have a wider hotspot, but a much more even beam. This image shows them next to the same 4500K E21A used for the original comparison.

This product was provided free of charge from the manufacturer. I was not paid to write this review, and have tried to be as unbiased as possible.
Manufacturer's product page
Amazon product listing (affiliate link)
Zeroair's review
Cree XP-G3 Integrated charging Micro USB Nitecore