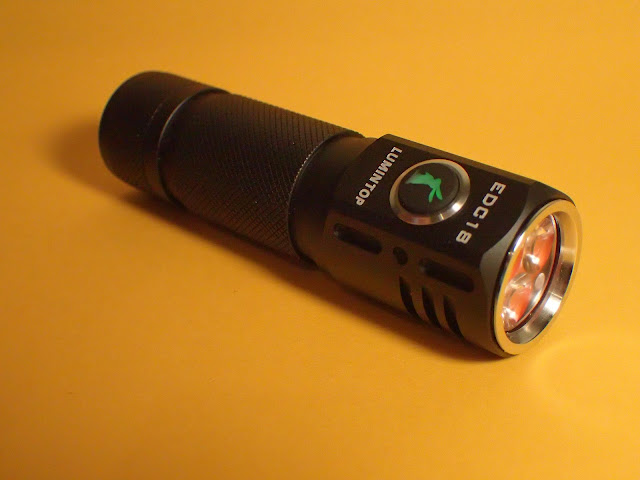 Today I have the Lumintop EDC18. This is a single 18650 light with a triple LED, a magnetic tail, and an indicating side switch.

This is a great, compact EDC light at a reasonable price. The UI is fantastic, it comes packed with loads of extras, and the form factor is good too. I still prefer single LED lights for EDC in my own personal use, just because I don't need the crazy output that triples can put out and prefer to have a narrower beam that can reach further - but I know I'm in the minority here. For people who prefer a floody EDC, this is a great option.
It's worth noting that this light will be competing with the FW3A and D4 in the segment of compact, floody EDC lights. I think this light has the advantage of not having the flared head that the D4 does and having a more robust design than the FW3A, though I'm not a fan of the tall protruding switch used in this light. 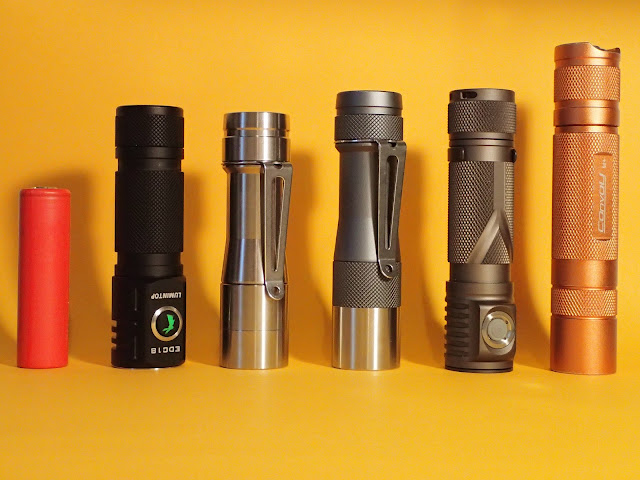 For comparison, here's the EDC18 and the 18650 cell that powers it next to the FW3S, FW1A, YLP Unicorn, and Convoy S2+. It's quite compact, but slightly longer than the FW3x. 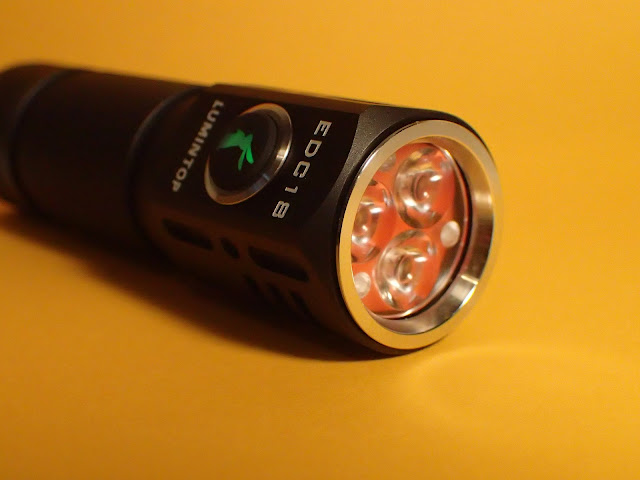 At the front of the light, a stainless steel bezel holds the lens and optic in. It's threaded into the aluminum head, so it will protect the front from bumps and scrapes but not the edges. There's no glass covering the single piece plastic optic on my sample, which does make it a bit more vulnerable to scuffs.
The switch has an indicating LED beneath it, and the name and brand are etched into the black anodizing. 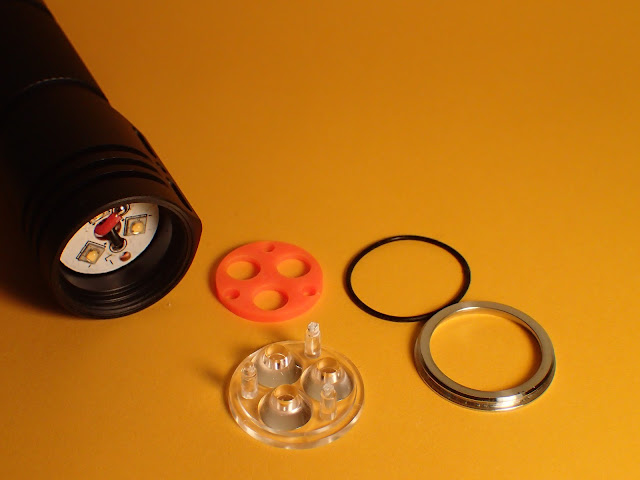 As a side note, many of these are shipping with a glow gasket that you need to install yourself if you want to use it. Since there's no detents on the bezel, I found the easiest way to open it was to press against a grippy surface like the sole of a shoe and unscrew it. Once it's off you can remove the o-ring and the optic and put the gasket in place. Be careful not to get the LEDs dirty, then re-install the parts you took off. 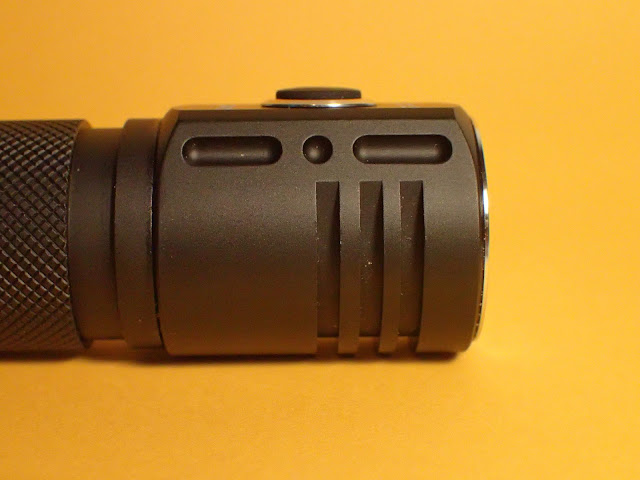 There are a few grooves cut into the head for cooling, and a flat side of the head to house the switch. This raised section also prevents the light from rolling on flat surfaces. A stainless steel ring holds the switch in place, and the switch protrudes quite a bit from the body. 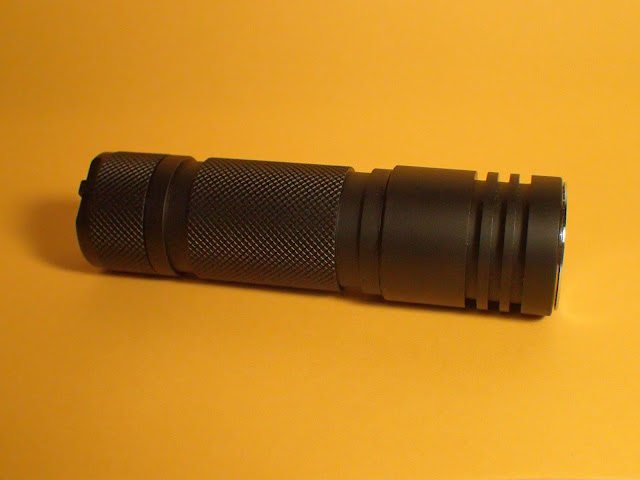 The body tube is a fairly plain cylinder with a groove at each end to attach a clip. The knurling is flat but provides a good amount of grip. 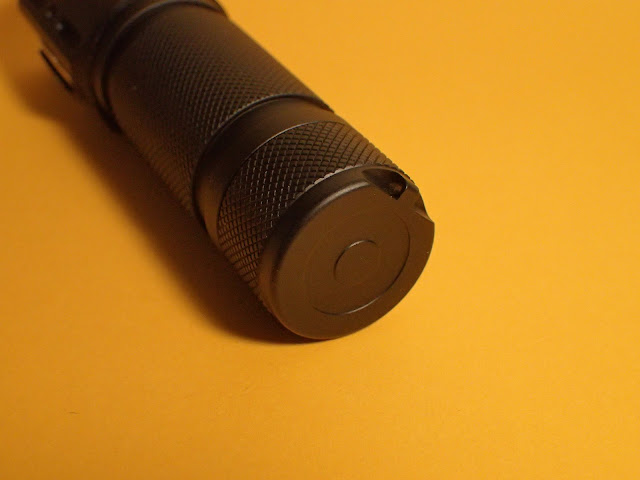 That same knurling continues on the tail, which has a flat base for tail standing. The tail also has a small hole to attach a lanyard, and a magnet inside. 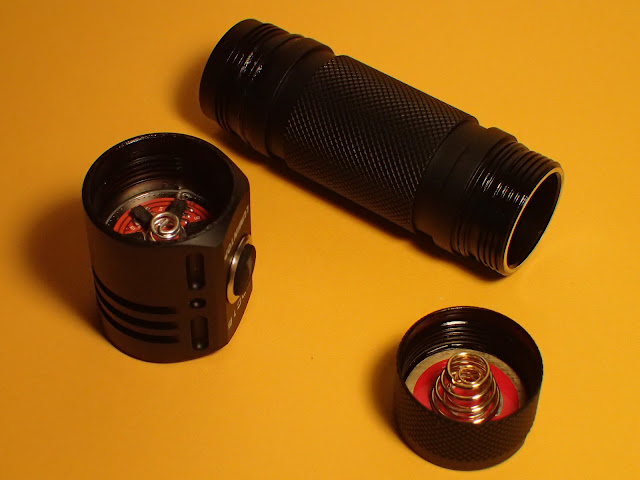 Both the head and tail unscrew from the body tube, which almost looks reversible except for the longer portion near at the head end. All threads are square cut and anodized. A small spring serves as the positive cell contact, with a larger dual spring tail at the negative end. Both the driver and the tail PCB are either press fit or glued in place, with no obvious way to easily remove them. 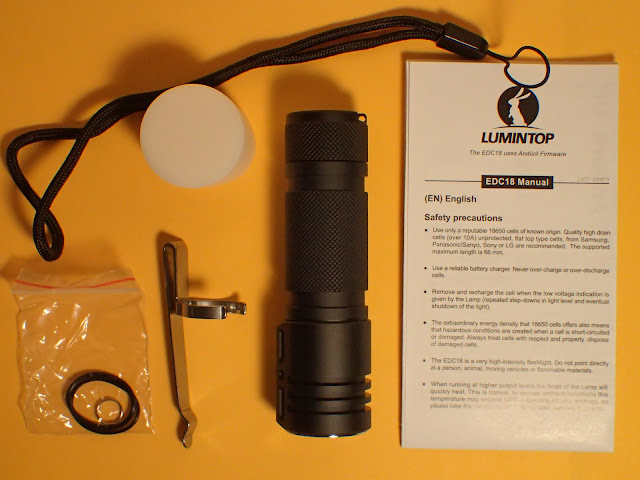 Lumintop uses their standard understated packaging for these lights. Inside, you get:
I'm not certain that the glow gasket is included with every light, but I believe it is. 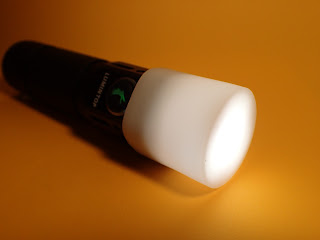 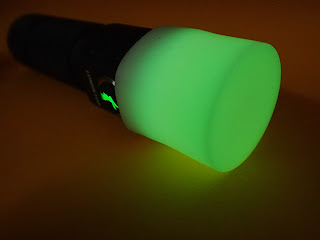 The included diffuser is a nice touch if you want to use your light as a makeshift lamp or lantern, and it glows in the dark. 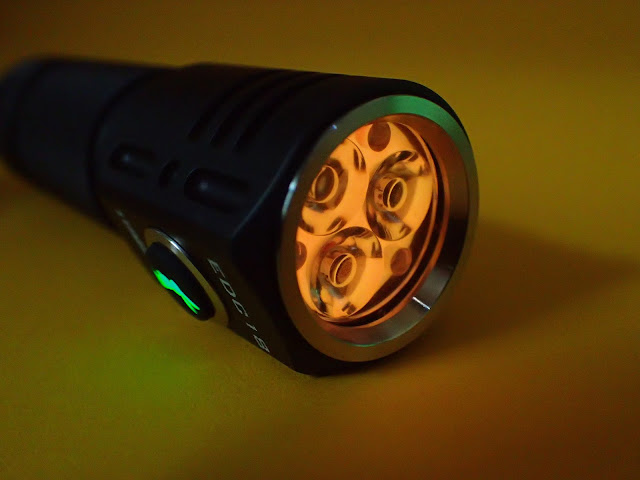 Once installed, the glow gasket is charged when using the light and glows afterwards. In addition to the switch, this can help find the light in the dark.

I find this light quite comfortable to hold, and the flat knurling has a great feel to it. The button is easy to find and has a satisfying click, but I wish it didn't stick out of the body quite so much. This makes it easy to accidentally press in a pocket, and I much prefer buttons that sit in their own indentations. 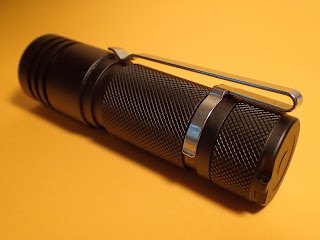 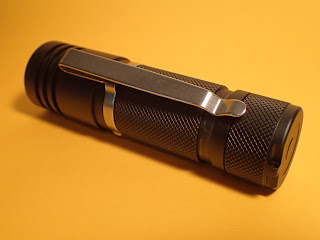 When attached near the tail, the included clip allows for very deep carry as it sits flush with the end of the light. It can also be used for head-up carry, but leaves a good section of the head exposed. You could theoretically use this light clipped to the brim of a cap as a makeshift headlamp with this setup, but I think 18650 lights are far too heavy for that to be practical. 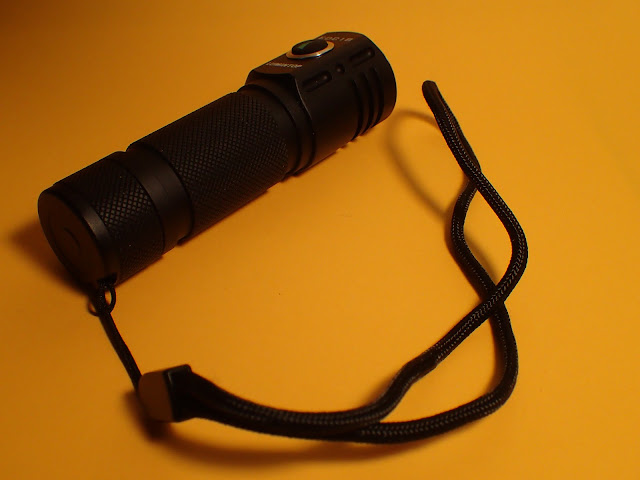 The lanyard can be attached through the hole in the tail, either with or without the included split ring. 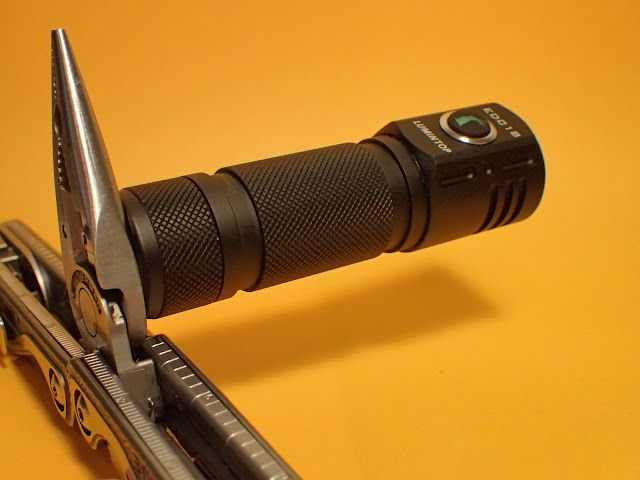 The magnet in the tail is strong enough to hold the light securely at any angle, and is not readily removable. 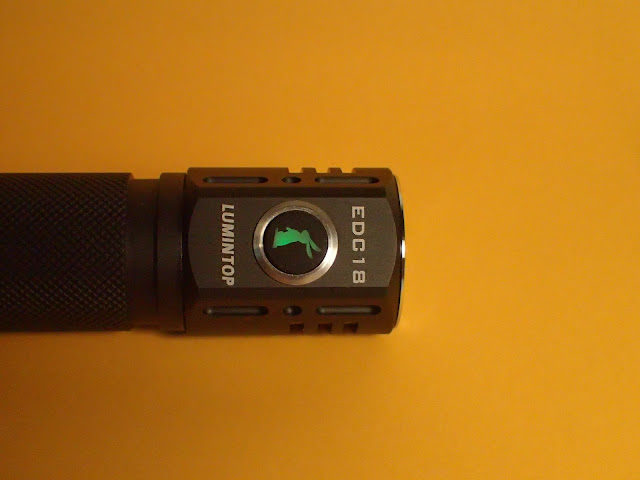 All functions of the light are controlled through the single backlit side switch. The light runs a UI called Anduril. I won't cover every feature of that UI here (I don't think I could), but here's the basics that I use every day:
There's a ton of features, but it really does all the basics well. The two levels of momentary while the light is locked out are an absolutely fantastic feature - I've loved momentary moon in lockout since I first tried it, and this is even better.
There's boat loads of configuration as well - you can change ramping for stepped modes, change the upper and lower ramp limits, and so much more. My one qualm with this UI is if you pick up the light and start clicking it on and off for fun, you might end up changing a setting or in a mode you didn't intend to be in - but in most cases, removing the head and re-installing it will get you back up and running. 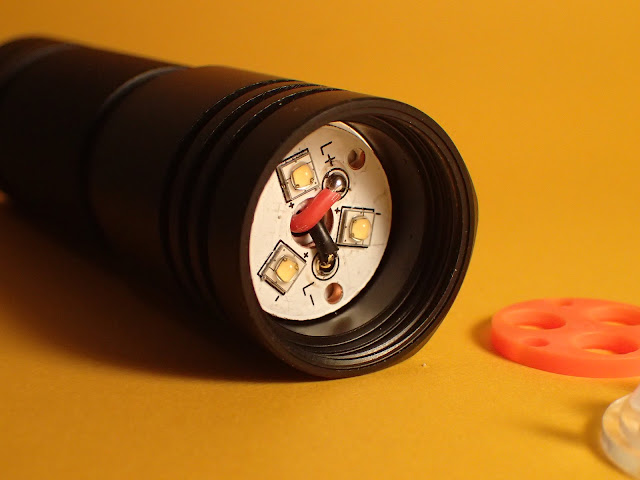 This light uses 3 LEDs being a triple optic, with a variety of choices for the emitters. I have the SST-20 in my review sample. Using three emitters in such a small light means a lot of output, but the very small space in the optic to direct the light forwards gives a very wide beam that doesn't reach as far as I tend to like.
At the time of posting, Lumintop lists the light available with Cree XP-L HD, Nichia 219C, and Luminus SST-20 LEDs. I think the two high CRI options, the 219C and SST-20, are the more preferable of those three. SST-20 will have a slightly narrower beam, and 219C will be a bit wider. 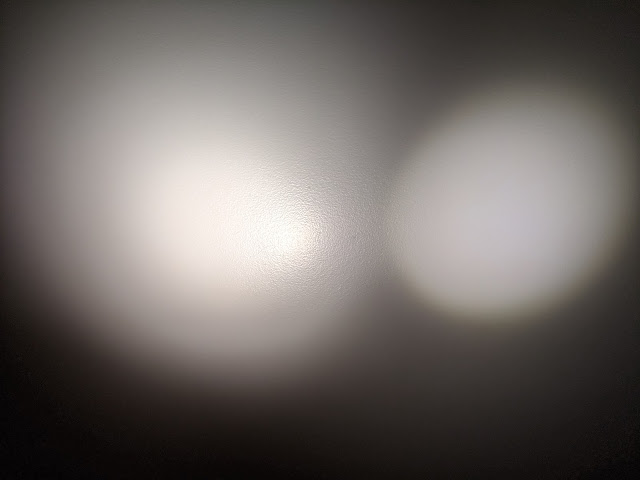 Compared to a 4500K E21A, the beam from the SST-20 EDC18 I have is just a touch cooler, but still very neutral. The beam has a great tint, and doesn't show any evidence of tint shift. 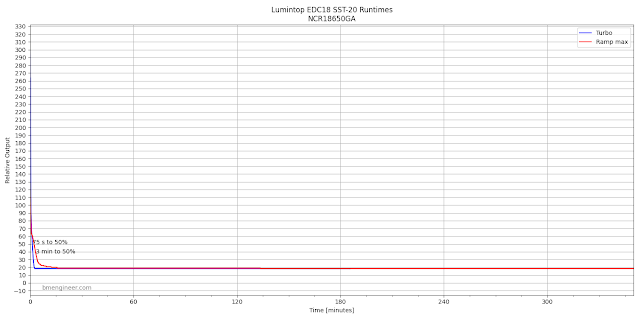 Runtime was tested without cooling, so this high output lights steps down very quickly. The runtime is fairly stable after the initial step down to 20% of the output at 30 seconds, but it's a drastic step down. I tend to prefer lights with more moderate ceilings and steadier runtimes.

This product was provided free of charge from Lumintop. I was not paid to write this review, and have tried to be as unbiased as possible.
Product page on Lumintop's site.
Product listing on Amazon, as a package including a battery (affiliate link).
1x18650 Flashlight High CRI Lumintop Luminus SST-20