The light I'm looking at today is the Lumintop FW1A. This light is a bit special to me as I had some small input during its design. When the FW3A was released, I immediately asked Lumintop and Neal to work on a single emitter version with more throw. A few prototypes and designs later, here we are.
This is a compact 18650 light with a tail e-switch and a single deep reflector on the front. It has an extremely rare combination of high output, long throw, and UI flexibility for a light this size.

I can't really be entirely unbiased in this review - I asked for this light to be made almost exactly as it was.
Both the FW3A and the FW1A are fantastic lights. Most lights with tail switches are forced to use very basic interfaces and are quite large, but some very clever engineering means the UI on these lights is able to be both intuitive and completely configurable. At the same time, that design makes the lights some of the smallest in their class - and certainly the smallest in my collection. They look great, feel good, and perform fantastically.
The FW3A was a bit too floody for my preference, but the FW1A is actually very throwy, and it's great. The spot is large enough for close up work or walking, but has a surprising amount of reach. This is really the ideal EDC for me, and will be spending a lot of time in my pocket for the forseeable future. 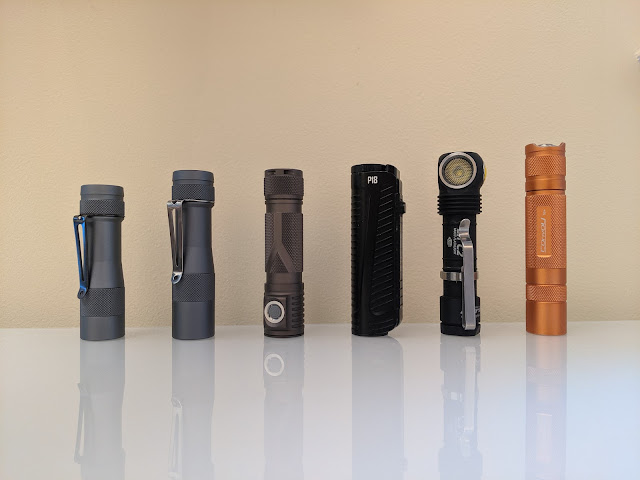 For comparison, here's a lineup. On the left is the FW3A, which is about 9 mm shorter as it doesn't have a reflector. To the right of the FW1A is the YLP Unicorn 1.0, Nitecore P18, Armytek Elf C2, and Convoy S2+.
To my knowledge, the FW1A has surpassed the P18 as the shortest 18650 light on the market with a tail switch and a reflector.

The light is made of aluminum with a slightly blueish gray anodizing. It's a thinner coating, but the color is nice. 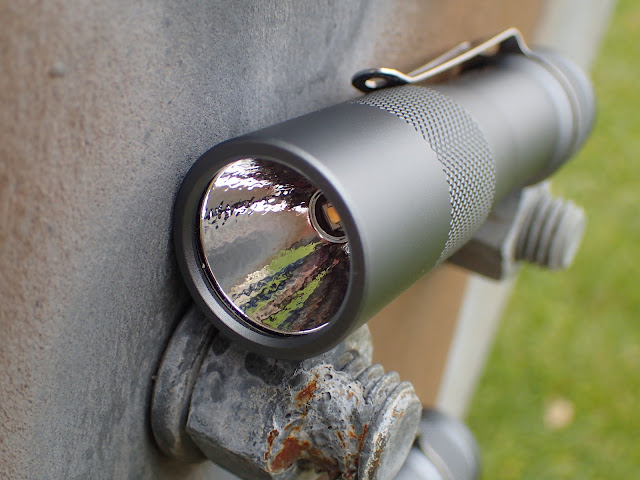 The bezel is smooth, and protrudes very slightly in front of the glass. This is one of many design elements made to keep the light as compact and sleek as possible. 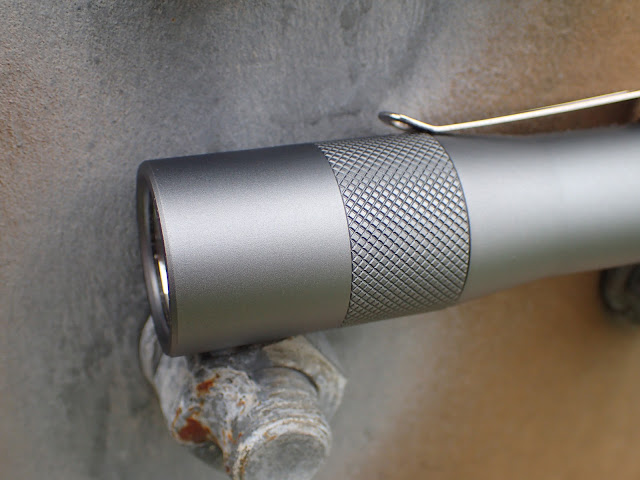 The sides of the head are simple again, with a small knurled section on the head. This adds some style and grip, and is also where the head unscrews for cell swaps. 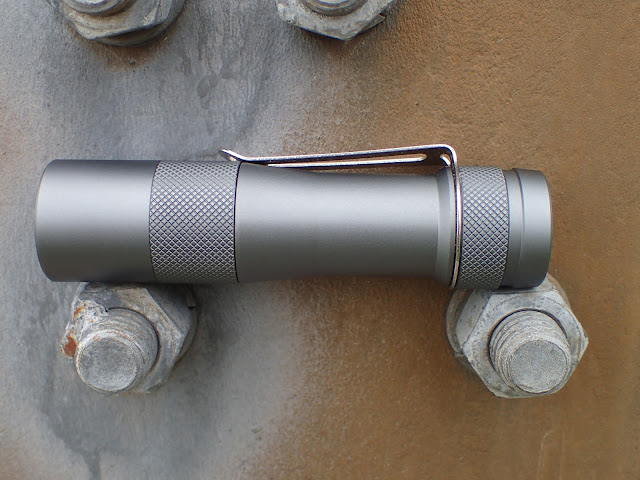 The cell tube has a nice taper in the center, with the head and tail being the widest parts of the light. 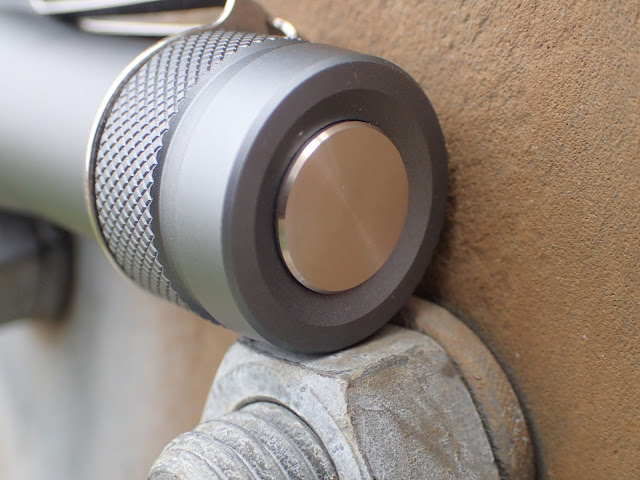 The tail has some knurling as well, but it's mostly just stylistic - the tail isn't really meant to be removed, since there's lots of little pieces to make this tail switch work. The switch is about flush with the tail. The light can tailstand, but the switch isn't very recessed at all and may activate in some pockets. The stainless steel switch boot is a nice touch as well. 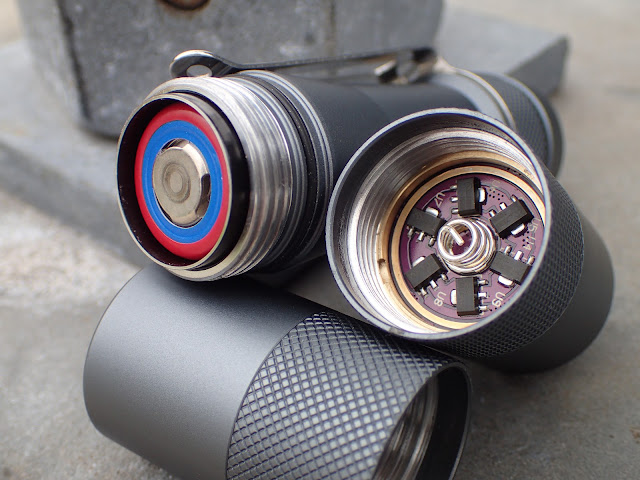 Removing the head gives a look at the magic that makes this light work - in order to connect the switch to the driver, the power transfers through the main body tube (like most lights), but there's a thinner inner tube that transfers the switch signal to the brass ring on the driver. The threads aren't anodized so there's no true mechanical lockout, but loosening the head slightly will prevent the switch from making contact and prevent accidental presses from being detected. On this light, I think the electronic lockout is a better option.
There's a short spring at this end of the tube, and another at the negative end. 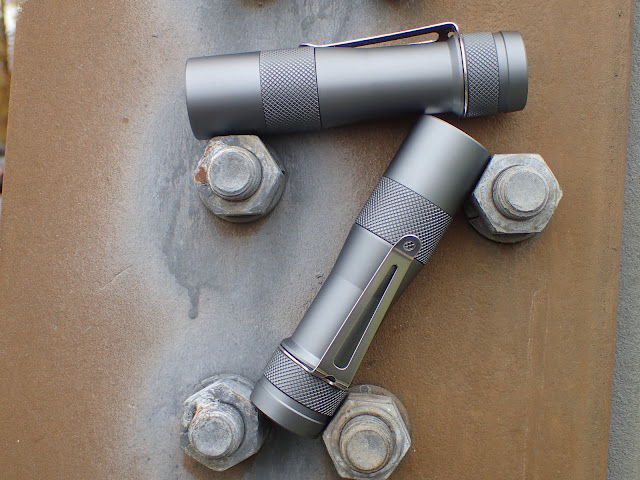 The general shape this light has, with a wider head and tail, is extremely ergonomic. Gripping the slimmer portion is solid since it can't slide off the two ends. For my hands, the longer head also makes the body fit better in a fist. It's worth noting that the coating and the knurling are both relatively smooth and slippery, so wet or cold conditions may be an issue for some. 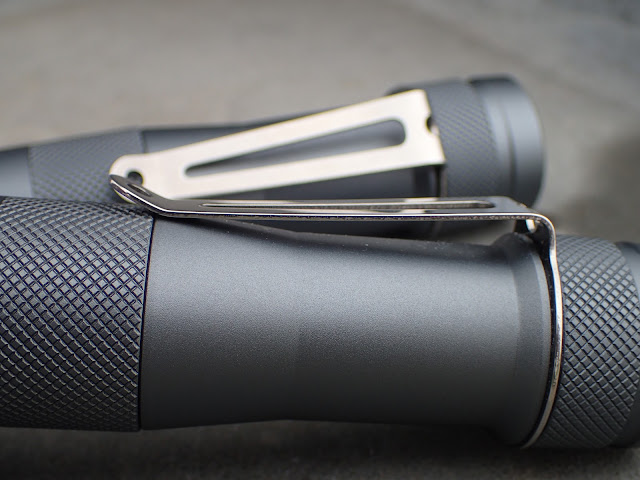 The clip on this light is well designed as well. It's fixed to the light with a collar, so there's no risk of it getting pulled off. It's also not really intended to be removed, but the light will work without it. The clip doesn't carry very deeply, leaving a bit over 1.5 cm exposed, but it slides very smoothly over most pockets I've tried it with.
There are no other magnets, lanyard attachments, or other methods of retention for this light - though Neal and some other vendors are carrying a generic belt sheath that it fits into. 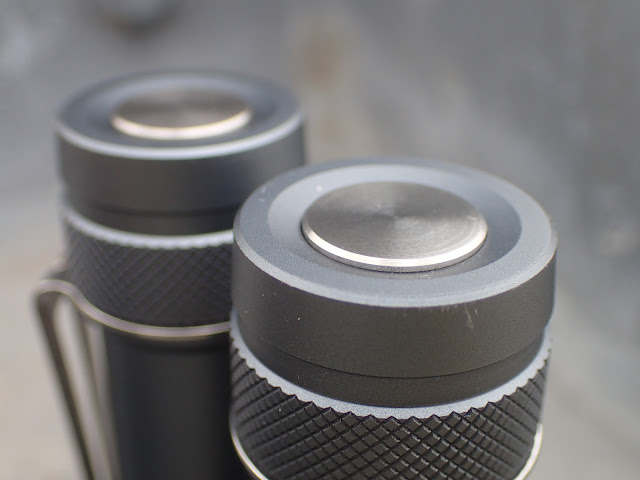 Aside from the compact size, the interface is the stand-out feature of the FW1A. It's controlled by a single tail switch, which many people prefer since it's always easy to locate without having to see the light.
Most lights with a tail switch have very basic interfaces, since the switch works by physically disconnecting power to the light. This makes it very difficult for the light to detect long presses and other complex interactions.
With the FW1A, the separate signal tube means this is an electronic switch, and it's running an open-sourced UI called Anduril. I won't cover every feature of that UI here (I don't think I could), but here's the basics that I use every day:

There's a ton of features, but it really does all the basics well. The two levels of momentary while the light is locked out are an absolutely fantastic feature - I've loved momentary moon in lockout since I first tried it, and this is even better.
There's boat loads of configuration as well - you can change ramping for stepped modes, change the upper and lower ramp limits, and so much more. My one qualm with this UI is if you pick up the light and start clicking it on and off for fun, you might end up changing a setting or in a mode you didn't intend to be in - but in most cases, removing the head and re-installing it will get you back up and running.

This light uses a deep reflector with a number of LED options available. I have the SST-20 and XP-L HD in my two review samples. A slight orange peel texture has been added to the reflectors to help smooth out any artifacts in the beam. The reflector also meets right at the edge of the bezel. Since the window is a lot wider than other tube lights like the S2+, this makes these lights very throwy - they reach a lot further than you would expect given the small form factor. 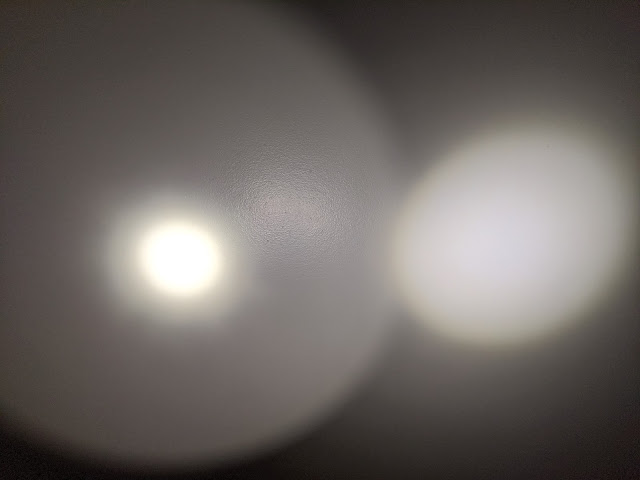 Compared to a 4500K E21A, the SST-20 shows similar tint with a slight yellow cast. You can see the tight hot spot with a large, dim spill. 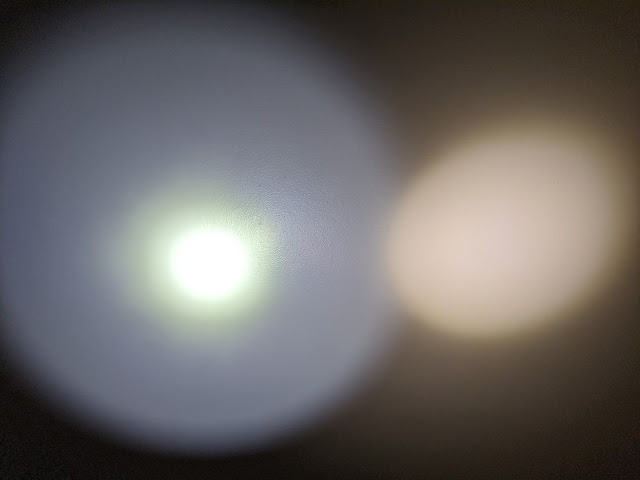 The XP-L HD compared to the same E21A is quite a bit cooler, and you can see there's a shift from green in the hot spot to blue in the spill. 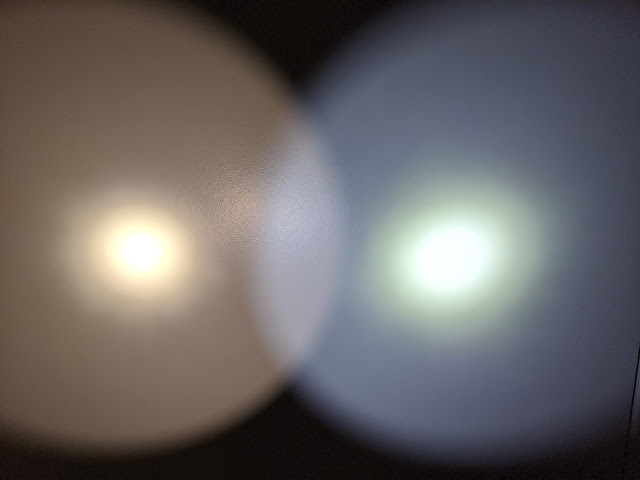 4000K SST-20 (left) compared to XP-L HD (right) shows the smaller hot spot with the SST-20, as well as the differences in tint and color temperature. 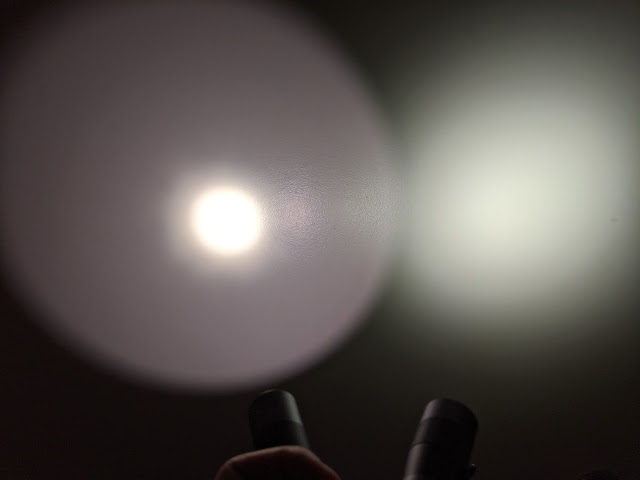 Finally, the SST-20 FW1A (left) compared to the XP-L Hi FW3A (right) shows how much more concentrated the beam is with the reflector. Both these lights are set to the same output, running at 1*7135.


Which LED should you get?

For those looking at the options available on Neal's site and unfamiliar, here's a brief rundown of the emitter choices.
The Luminus SST-20 4000K is one of my two samples and the one I'd probably recommend for most people. This LED is a slightly warm-neutral temperature. It has high CRI, meaning it accurately shows colors and won't wash them out (a common problem with LEDs). Since the LED is so small, the light is very throwy (it gives a lot of distance), but the output isn't quite as high (less lumens) than some other options.
The Cree XP-L Hi is another option. This will also have a very throwy beam, but it's not high CRI and may wash out some colors. Output will be a bit higher than the SST-20. There are three of these available - the 1A is a cool white (a bit bluer), 3D is neutral, and 7A is warm (a bit more orange-y).
The Cree XP-L HD 1A is probably the option with the highest output, but this LED is slightly larger than the previous two, so the beam will be slightly less concentrated. This is the second light I was sent, and only cool white (blue-ish) is available. These LEDs are known to have a bit of uneven tint across the beam, but can be worthwhile for those wanting the highest output in this light.
Finally, the Nichia 219C 4000K will have a similar beam to the XP-L HD, but with a more even tint and higher CRI - but less output.
In case anyone got this far and is wondering, the Convoy Holster is in fact a holster, and the NCR18650B 3400mah, Sony VTC6 battery, and Samsung 30Q battery are all batteries, and not LED options.

Runtime was tested without cooling, so these high output lights step down very quickly. The FW3A was tested alongside these two lights for comparison. It's clear that the highest levels are far more than these lights can handle, so the thermal throttling is drastic - though the cool white XP-L HD is slightly more efficient and maintains a higher output after stepping down.

Zooming in to the first 15 minutes shows the step downs a bit clearer. The FW3A obviously has the highest output, but without cooling it steps down so quickly that the output at 30 seconds is already lower than either FW1A tested. When run on high instead of turbo, the SST-20 FW1A maintained a higher output for about 5 minutes before settling down. Turbo can be reset, and use outdoors or even while holding the light will help with cooling and longer runs before stepping down.

This product was provided free of charge from Neal's Deals. I was not paid to write this review, and have tried to be as unbiased as possible. I had some input into this light's design, and I'm sure that impacts my ability to remain unbiased.
Product page on Neal's site - use code BLFFW3A for 20% off.
Accessory page with a few different clip options and shorter cell tubes for 18350 and 18500. 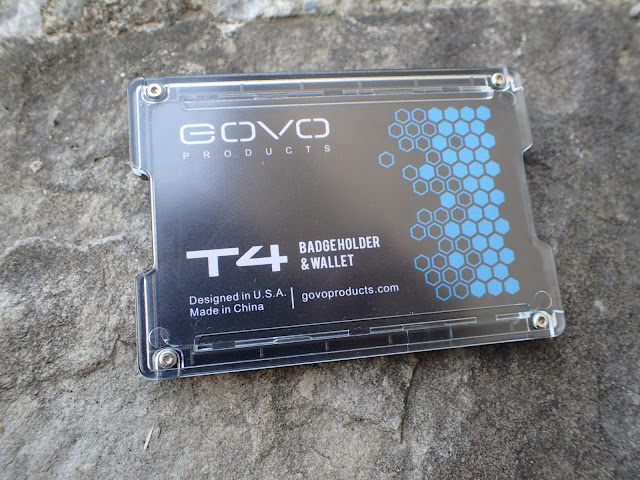