Nitecore sent over their newest headlamp to review, the HC35. This light is powered by a 21700 battery, with micro-USB charging and 4 emitters.

This is a great headlamp with huge output and runtimes. The large battery also means the headlamp itself is larger and heavier than others, but if you need a light to last a long time without fiddling with cell swaps, there really isn't much else on the market.
I think the size combined with the runtimes make this the perfect light to add to a helmet for construction or caving, where you already have some weight on your head and need 8+ hours of light. 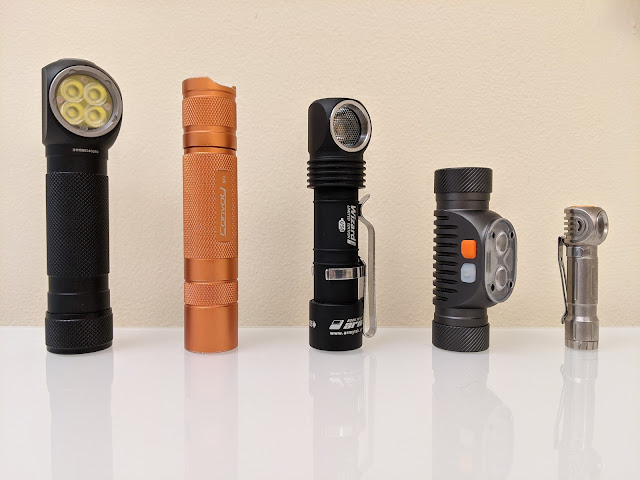 Obviously this light is a touch longer than 18650 lights like the Convoy S2+ and Armytek Wizard Pro, but not by an obscene amount. Dedicated headlamps like the YLP Panda 2M CRI are drastically shorter though. The Lumintop HLAAA 2.0 is dwarfed in comparison, but it's also running a single AAA cell. 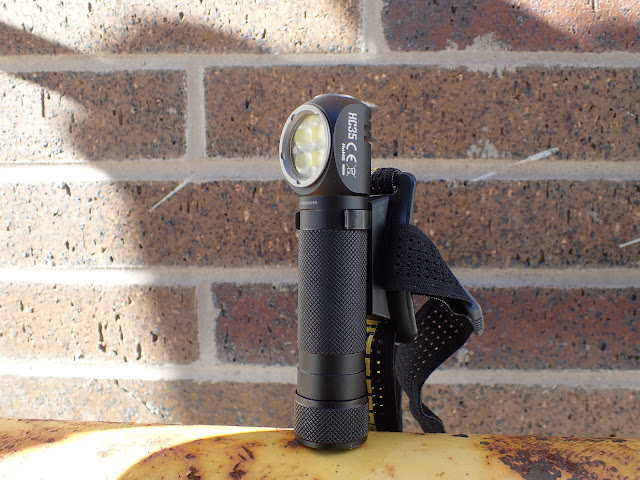 The switch is located at the head of this light, which makes it harder to press in the headband but easier to find. Both the optics and the switch are held in place with a stainless steel ring, and there is no glass covering the plastic optics. The head also has an interesting profile that flares out towards the optic and tapers towards the body.
As far as I can tell, the head and body of this light are milled out of a single piece of aluminum, which would help keep the weight of the headlamp down while improving strength, cooling, and water resistance. If they are in fact two pieces, they are joined together remarkably well. 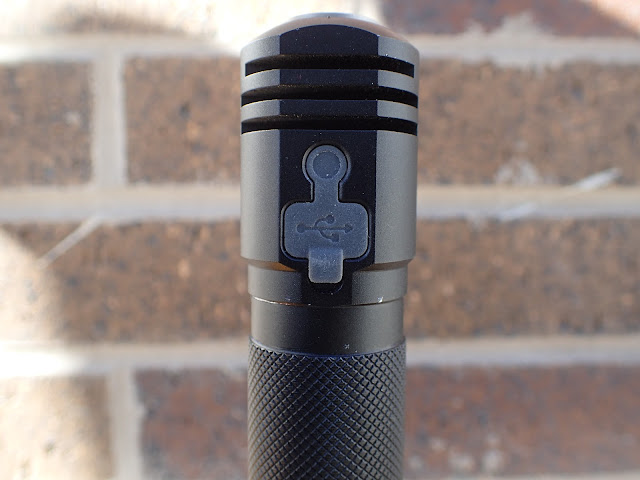 Opposite the LEDs are some deep fins to help with cooling, and a micro-USB charge port protected with a dust cover. 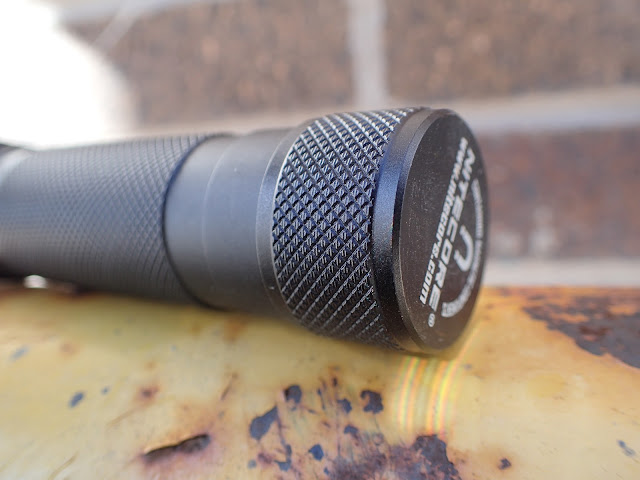 The tail is magnetic, and knurled like the body to make cell swaps easy. The magnet is strong enough to hold the light perpendicular to a surface. 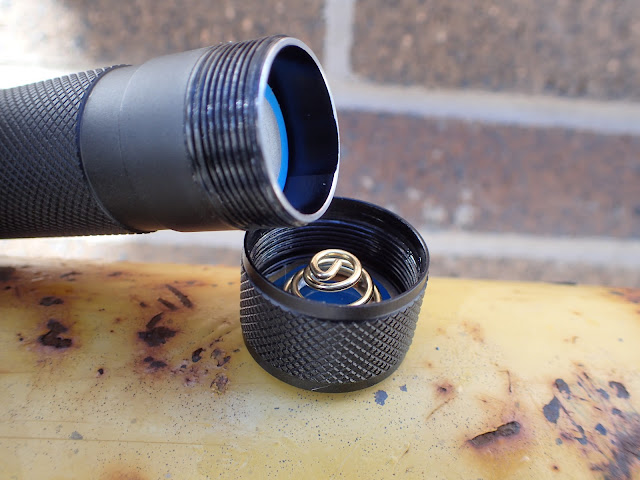 The tail threads are square and anodized, meaning the light can be locked out by loosening the tail cap. There's a nice thick spring for the negative contact. 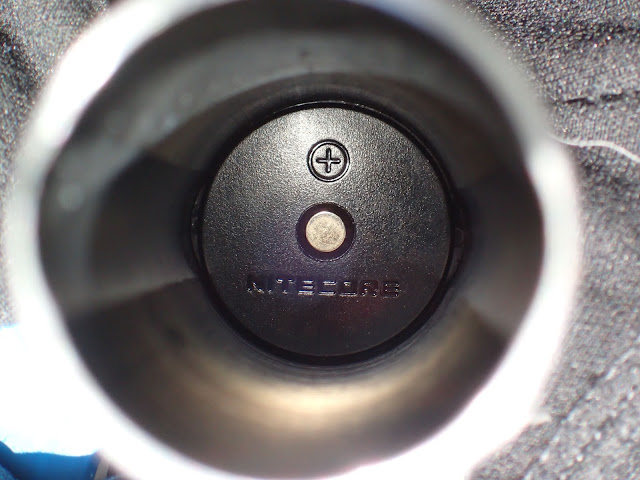 I was unable to remove the head, and convinced it may not be a separate piece at all, but we can see that there's a button that serves as the positive contact. It looks like mechanical reverse polarity protection, but flat tops worked just fine for me.

The light comes in a very nice little tin. Inside, you get: 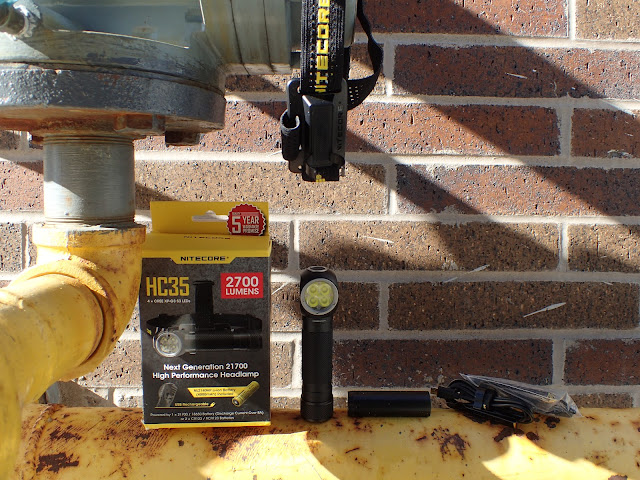 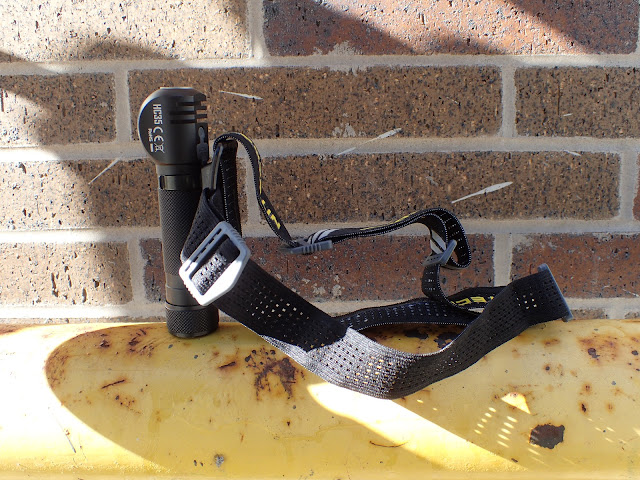 As a headlamp, the main way people will use this light is with the included headband. This clips into place like a pocket clip. Although there are grooves to attach a clip at both ends, the attachment is more balanced with the head of the light on the right hand side. I found the clip to have a good hold on the light, while still being much easier to take off and put on than the standard silicone brackets. You can also attach the headband without removing the clip, depending on the orientation you choose.
The headband itself has perforations in the elastic designed to help wick sweat away. There's a bead of silicone on the inside to prevent slipping, and reflective detailing around the outside. The top strap is removable, though that probably isn't recommended for a light of this size. I found the whole setup quite comfortable and didn't notice the weight anymore than I do with a smaller 18650 headlamp when wearing it.
The magnet in the tail is strong enough to hold the light to a metal surface in most orientations. 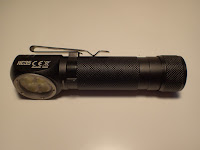 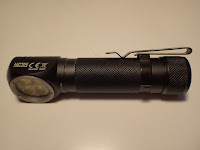 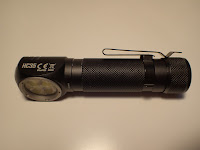 There are two places the clip can be attached, but head up makes the most sense to me. When attached head down it either sits weirdly in the middle of the light or protrudes past the tail - though attaching it at this end has the advantage of not requiring removal when using the headband. I wish this was thought out a bit more and the groove was moved a bit further up the body.
I'm not sure why there's a lanyard included, as there's no lanyard hole anywhere on the light - though there is a hole in the clip if you choose to use it.

A single switch at the head of the light controls the interface, which has two indicating LEDs under it. It's a great switch, with a responsive click and a slight indentation so it won't get pressed accidentally. 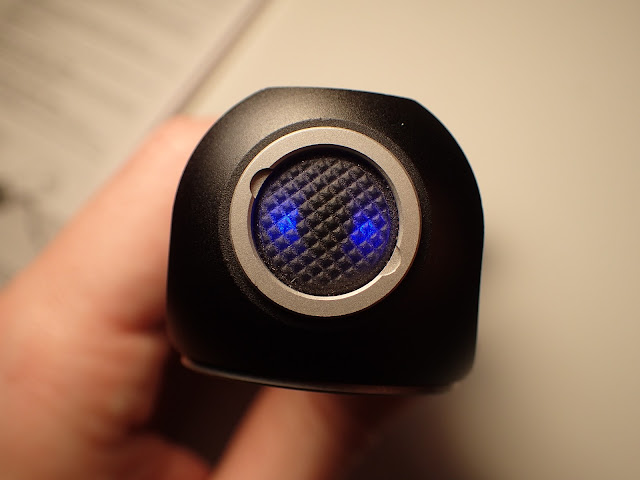 The UI is as follows:

Additionally, the indicating LED will blink out the cell voltage when the battery is first inserted. As someone with way too many lights, I love when lights use voltage for level of charge instead of some random number of flashes.
I'm not a fan of long press for off, but I really like the fully featured shortcuts this UI has. The one thing I wish was added is a momentary turbo mode for those quick peeks further off the trail on a hike. 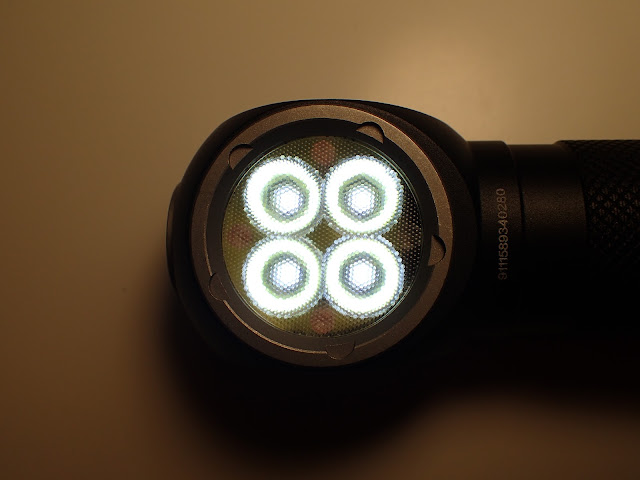 This light uses 4 cool white XP-G3 behind a dimpled TIR lens. I usually don't like this emitter, but the optic used here does a great job of smoothing out the beam and giving a nice even tint. I also usually don't like quad or triple optic lights as they don't have a lot of reach, but for a headlamp a wide even beam makes sense. 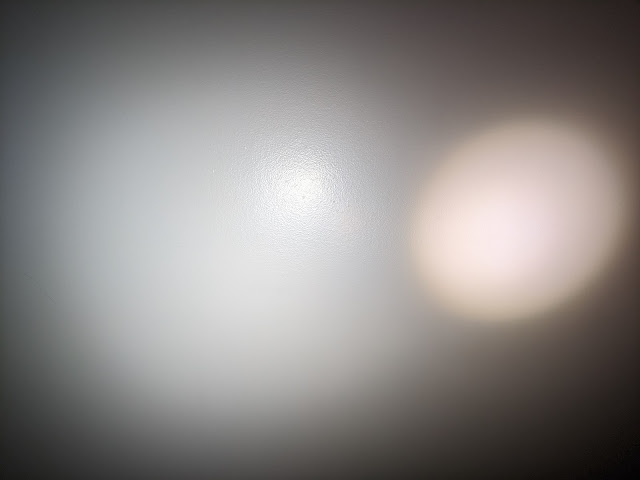 Compared to a 4500K E21A, you can see that the tint is cooler and slightly green, though still very even across the beam. In real world use the tint was quite nice, though I wish there was a high CRI offering.

This light comes with a 4000 mAh 21700, but I believe the lovely folks at the border helped themselves to mine, so it was tested with a 5000 mAh Samsung 50E instead.
On high, the light beats the listed runtime by 25% and, after a step down, is perfectly regulated. Medium is similarly flat but without the step down, and lasts for well over 8 hours. If you need a light for a full work day, this is certainly going to be a compelling option, and 18650 lights can't compare.

Zooming in to the first hour, the drastic step down from turbo mode is apparent, dropping down to 30% or the output at 10 seconds in half a minute. The highest modes is really only intended for short bursts. 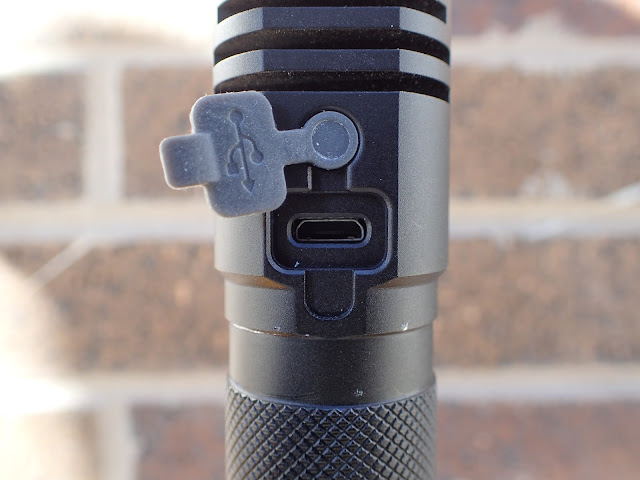 To charge the light, just plug in the included micro-USB cable to any power supply you have on hand. I don't love that it relies on a rubber flap to keep moisture out, but it should do the job just fine. When charging the indicator LEDs flash slowly, and turn solid when charging is complete.

I was surprised to see such a high charge rate of about 1.75A, which recharged a 5000 mAh battery in a little over 3 and a half hours.

This product was provided free of charge from Nitecore. I was not paid to write this review, and have tried to be as unbiased as possible.
Nitecore HC35 listing on Amazon.
Official product page.
1x18650 1x21700 2xCR123A Cree XP-G3 Flashlight Headlamp Integrated charging Micro USB Nitecore