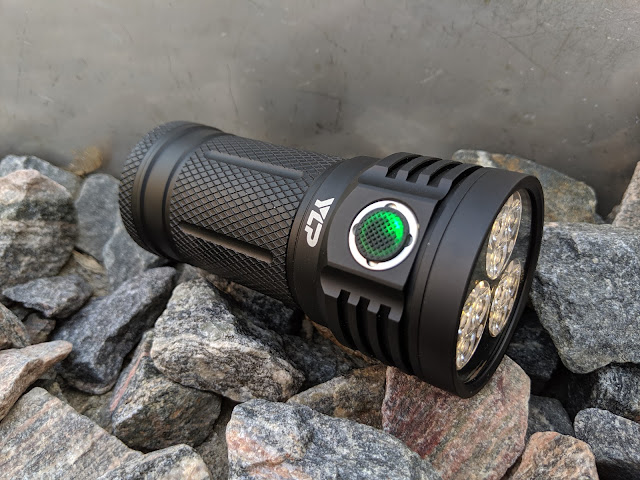 YLP sent over their largest and highest output flashlight, the Gryphon G180, for me to take a look at. This is a 'soda can' style light powered from three 18650 cells, with 9 LEDs behind TIRs at the head.

I would never have considered a soda-can light for myself, just based on my usual use cases - I like my lights to be pocket friendly, and I'm usually very happy with the amount of output smaller lights can manage. I was actually surprised how much I liked this light though.
The 3 cell form factor is actually quite easy to shove in a jacket pocket, and not absurdly heavy. The UI is good, and the stable output is fantastic. This isn't a hot rod like some other lights, but the great regulation and sturdy ability to tailstand means it's probably what I'll grab first next time the power goes out and I want to light up a room. It's been serving night stand duty since I got it, but it's also great at lighting up an entire field if you need it to. 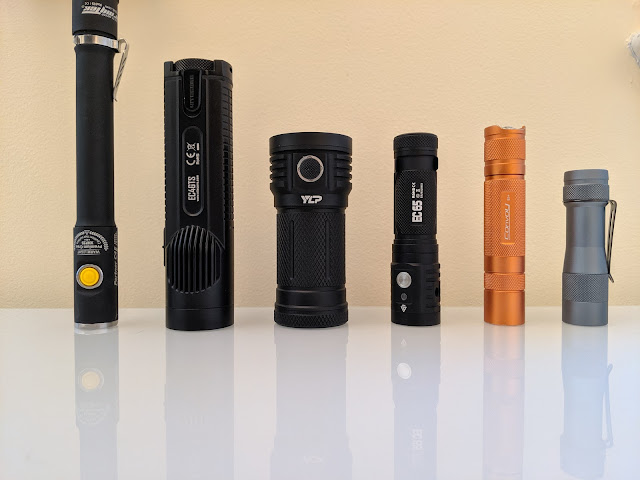 I've already mentioned that I don't have any other soda can lights, so a comparison shot was a bit difficult - but here it is next to some other multi-cell lights (Armytek Partner C4 Pro and Nitecore EC4GTS), some other multi-emitter lights (Acebeam EC65 and Lumintop FW3A), and the Convoy S2+ I use for most comparisons. Notably, the G180 is one of the shortest in the lineup. 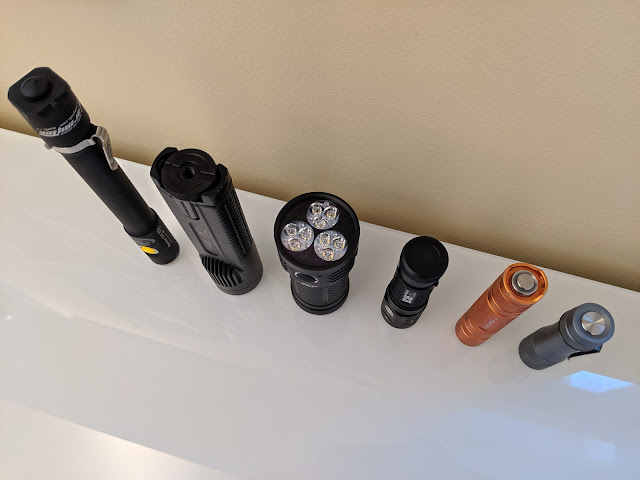 Changing the perspective a bit, it's clear to see that the 3 cells inside this light make it the girthiest in this group.

This light is made completely of aluminum. The black anodizing feels consistent across the body of the light, and is smooth but not glossy. 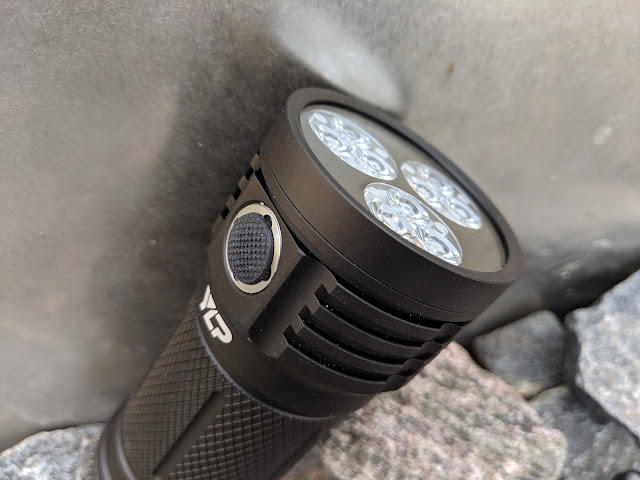 The bezel of the light is flat, without crenelations, and very shallow. This helps with the incredibly short length of this light. The rest of the head has fins cut into it for cooling. The notches cut across the fins help locate the switch, and also stop the light from rolling on flat surfaces. A stainless steel retaining ring holds the switch boot in place. There are red and green indicating LEDs under the boot, used to indicate voltage when the light is on. The fins are continued around the head, with a lanyard hole opposite the switch. Almost all of the weight of the light is in the head when there's no cells in the body. 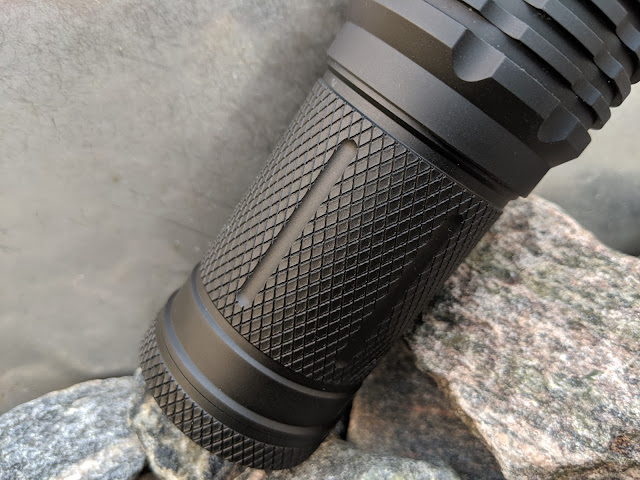 Shallow knurling covers the body tube, again with some grooves milled out for a bit of extra grip. There's a seam added that makes it look like there's a tail-cap, but the body 'can' is really a single piece. 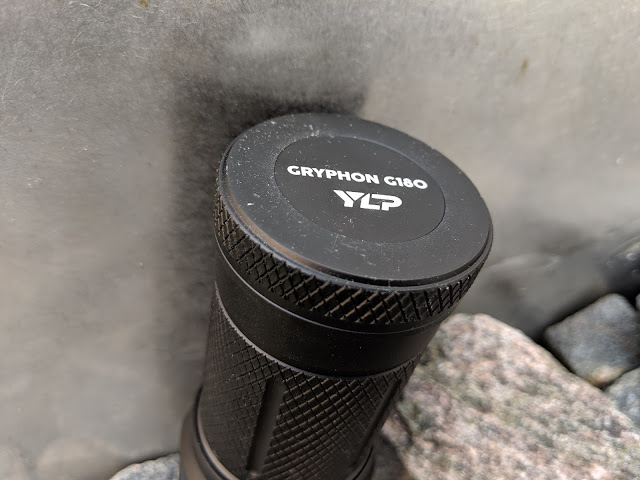 The tail is wide and flat, and very stable for tail-standing. This is my new favorite ceiling-bounce light if I need to illuminate a room. 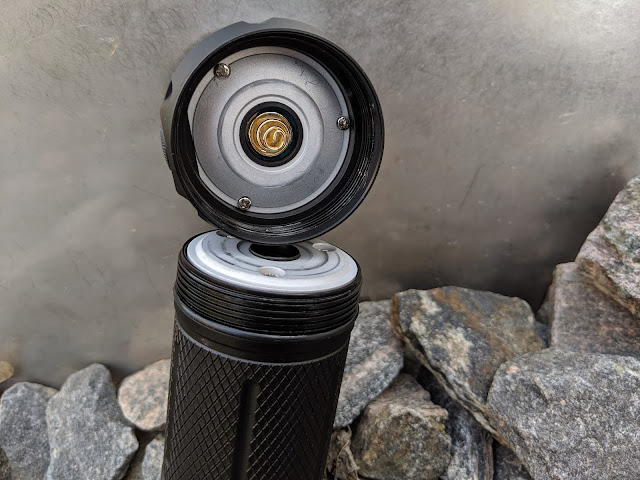 The threads at the head are cut very well and extremely smooth. They're anodized, but they aren't an electrical path. The only purpose of the tail section is to compress the spring so the outer aluminum ring of the cell carrier makes contact with the head - with a bit of downwards force, the light works without the tail. Even so, loosening the tail will mechanically lock out the light. 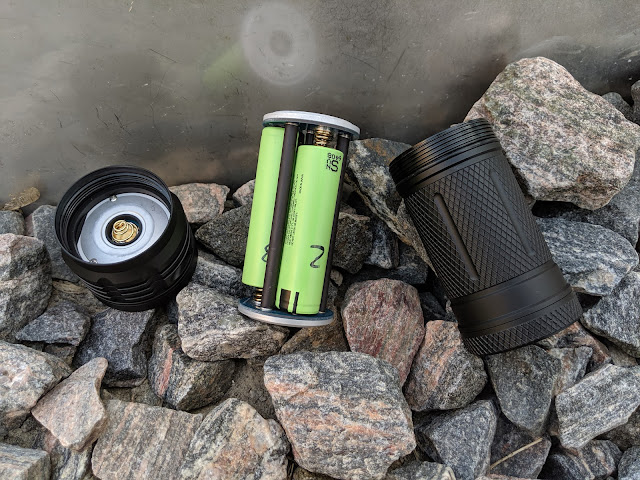 The carrier comes out for cell changes. It holds the three cells in a series arrangement. The two ends of the carrier are physically and electrically identical, so you can toss it in the tube in either orientation. 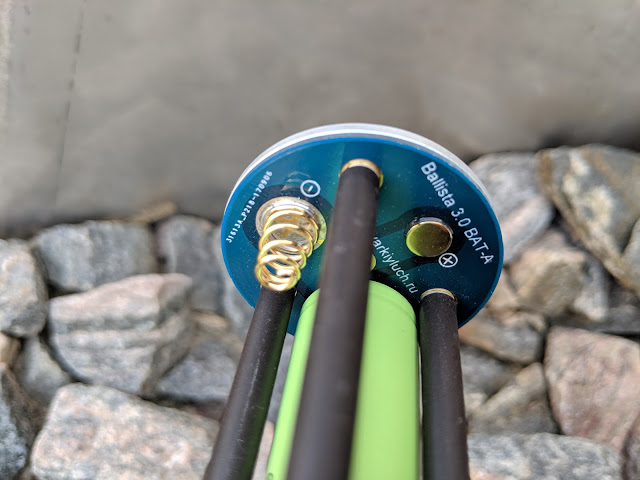 The carrier uses a spring for the negative contact and a protruding button for the positive contact, so flat top or button tops should work just fine. 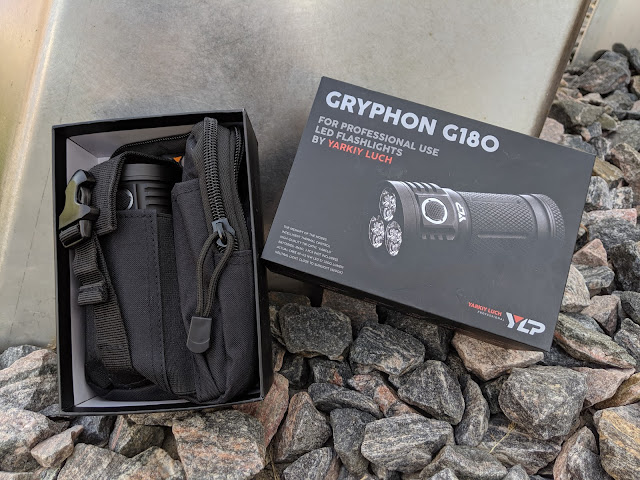 The light comes in YLP's standard black box, with a picture of the light on the front. Inside, I was happy to see the light uses the included accessories as packaging in place of foam. As premium as custom cut foam looks, it's pretty awful for the environment, and there's absolutely no reason why a well built light shouldn't be able to handle the rigors of the postal service - so I'm always very happy to see the holster used instead. This is only the second production light I've received that shipped like this, and I hope more companies follow suit.
Inside the box, you'll find:

My sample also included 3 samples from the manufacturer to use for testing, but these are not part of their usual inventory and are not available for purchase. 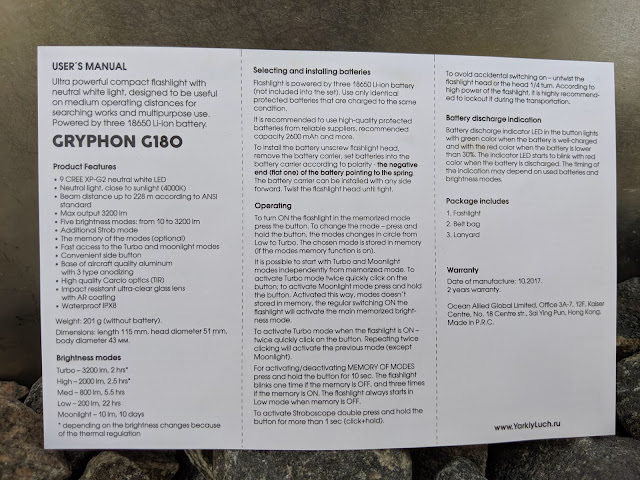 The included manual describes the features and UI in English on one side and Russian on the reverse.

The stout proportions of this light are actually surprisingly comfortable in the hand, and the button placement is easy to locate and natural. No complaints here. 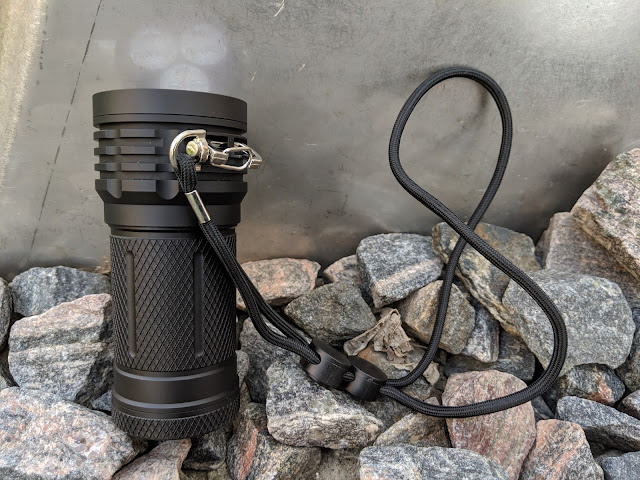 The light comes with a very long and seemingly high quality lanyard. It connects to the light with a large lobster clip, that's a bit too wide to move freely in the lanyard loop on the light. I always prefer lanyards that connect to the light with a bit less hardware, but using a little clip does definitely make it easier to attach than threading the lanyard through the hole. 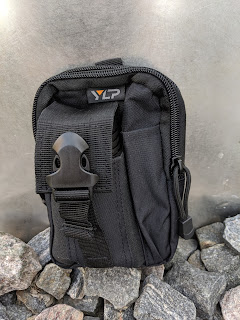 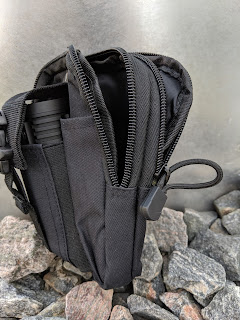 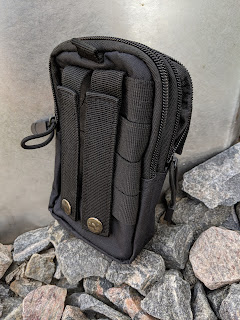 If you don't have any pockets that are up to the task, YLP includes a belt pouch with this light instead of the traditional holster. I don't usually strap things to my belt, but this is a nice little organizer for travel and a good bonus to include. The light fits snugly in the front pocket with a clip closure, and there's a slimmer pocket next to it that could hold a pen or two. There's two zippered pockets in the rear, both with a divider inside. On the back of the pouch, there's webbing running across and snap-closure webbing running top to bottom - you should be able to attach this to whatever belt or bag you want to.
There's no magnet or pocket clip included, which seems reasonable to me on a light this size. 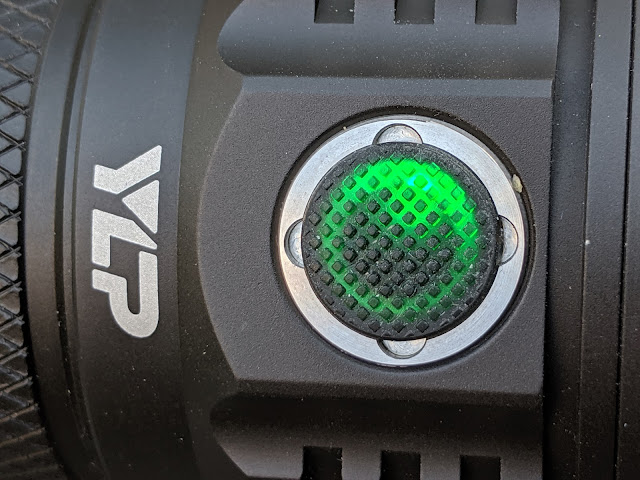 The light is controlled by a single side switch. The switch has a great feel to it and is very responsive. The UI here used is a very common UI that I like to think of as the 'default' for a number of brands - thankfully.

All great. Press for on, press for off, your choice of mode memory or not, strobe is there if you really want it but hidden if you don't. Not a thing I would change. The modes are listed as moonlight (10 lumens), low (200), medium (800), high (2000), and turbo (3200). Normally I like to see a lower moonlight mode, but on a light this size I think the mode spacing is just fine. 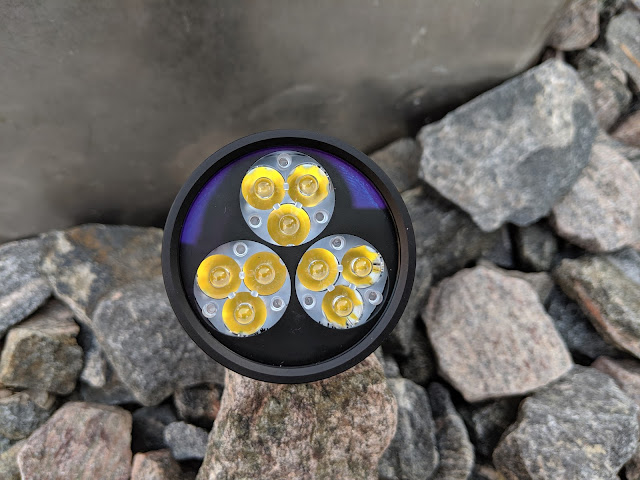 The light uses 9 XP-G2 behind three separate Carclo optics. It's an interesting design, and I can't help but note the similarities to the Noctigon Meteor M43. The 4000K CCT is a great neutral white. Colors are good, but there is some slight tint shift across the beam.
YLP clearly cares about the tint of their lights, and I have yet to see something from them that makes a bad beam. With most brands, I would be happy just to see a neutral white LED used - but since they're doing such a great job, I'm going to nit-pick and say the Samsung LH351D or the Nichia 219C that they're using in a number of other lights would be a nice upgrade to the Cree LEDs used here. It would give a high CRI beam, and probably help with the tint shift. 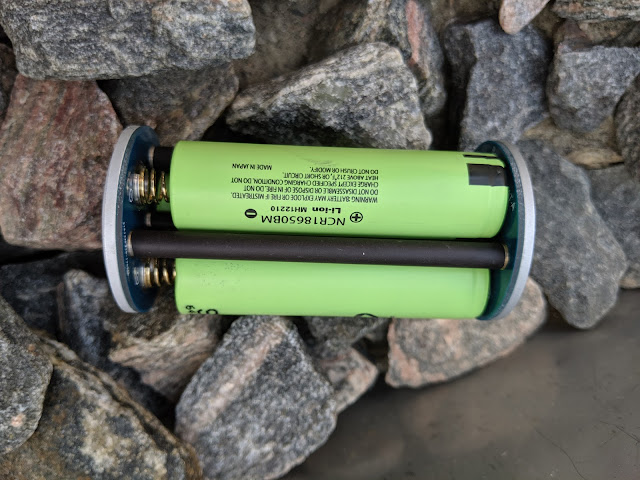 The light takes three 18650 cells. The carrier should work fine with button tops or flat tops. Since the cells are all in series, it's highly recommended to use a married set of 3 protected cells. Keeping a set married ensures similar internal resistance and capacity across the 3 cells.
Runtime was tested using three unprotected flat-top NCR18650BM cells, because that's what I had available - again, these are not the cells I would recommend using with this light, and protected cells are a recommended addition for safety in this configuration.

This light will get too hot to touch on the highest modes. It steps down for the heat, but you'll want to manually step it down further if you're holding it without gloves.Turbo has a heavy step down, and settles around 40%. The highest mode shows a bit of thermal throttling as well, but medium is rock steady for the duration of the test. All modes, once the temperature settles, show great stabilization and don't track downwards with cell voltage at all. The runtimes also all exceed the manufacturers claims.
The indicating LED under the switch will turn from green to red, begin flashing red, and finally shut off when the voltage gets too low. LVP means protected cells aren't required, but still highly recommended.

This is usually where I tell the reader to do this at their own risk, but things didn't go as plan here - in any case, still do this at your own risk, and here's what I found getting into the light. 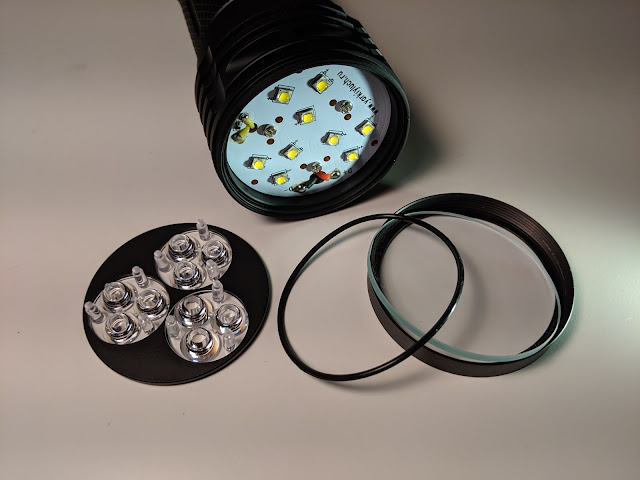 The bezel unscrews quite easily, and reveals the thick glass lens, an o-ring, the plate, and the 3 Carclo optics on top of the MPCB. 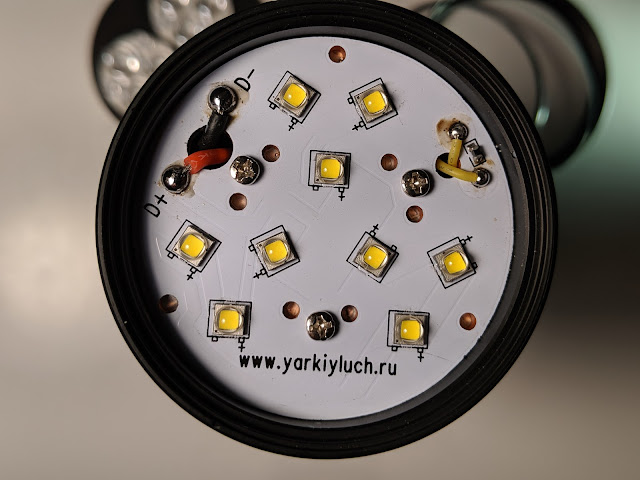 Lots to see here - all LEDs are on a single, solid copper MPCB. The MPCB is screwed down to ensure a good thermal path, and the thermosistor for temperature control is mounted directly to the MPCB. The holes you see are to center the optics used, and the LED do appear to be XP-G2 as claimed. 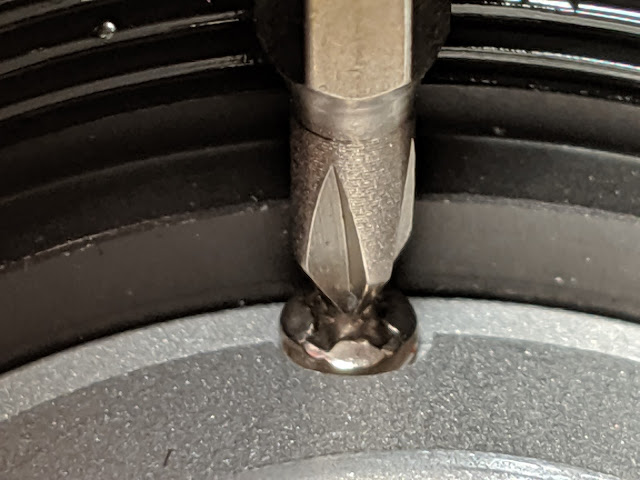 Well then. I'm quite happy with the stock driver, but I wanted to get a peek at the guts anyway - but it looks like some sort of clear epoxy is filling the three screw heads holding the driver plate in place. The epoxy is transparent enough that this image doesn't show it at all, so you'll have to believe me that the screwdriver is resting on it. You'll also have to imagine me wondering why I can't use a screwdriver for [undisclosed time period] before realizing what was going on. I'm sure you could get these out if you really wanted to, but since I have no plans to modify what's underneath, I left it at that.

This product was provided free of charge from the manufacturer. I was not paid to write this review, and have tried to be as unbiased as possible.
Manufacturer's product page seems to be the place to get this light.
Product listing on Amazon (Affiliate link) - but, at the time of writing, the price is double what the manufacturer has listed.
Maukka's review, with detailed output and light quality measurements.
Labels: 3x18650 Cree XP-G2 Flashlight YLP