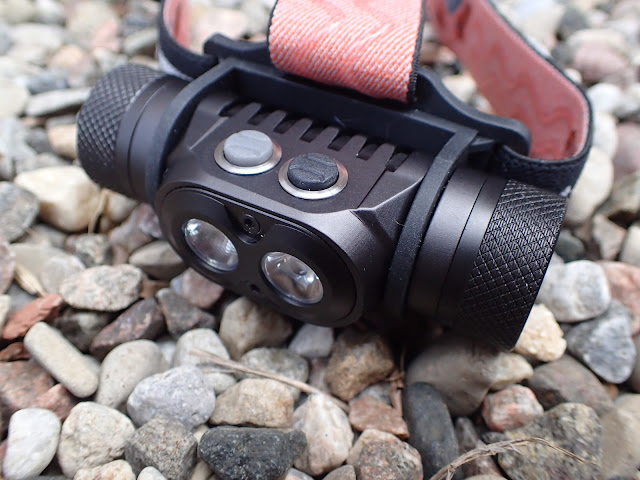 YLP sent me their newest headlamp to take a look at, the Panda 3R. This is an 18650 powered light with built in charging and two switches, but the optics are what sets it apart - the two LEDs and lenses are optimized to create two beams with different profiles, one throwy and one flood. The two beams can be used independently or together, and it's all controlled by two back lit switches on the top of the light.

This headlamp builds on the design of the Panda 2. YLP added better waterproofing, and differentiated the two LEDs from one another by optimizing one with a floody beam for close up work, and the other for far reaching light. The build quality also seems a bit better, if only for the aluminum gasket holding the lenses in place.
It's a good headlamp for sure. It's plenty powerful, and the UI is good - but it's not perfect. I found it gets a bit hotter than I would like on the highest mode, so I would recommend staying away from turbo modes if you're on a longer hike. It also uses an XP-G3 for the floody LED, which enthusiasts might not love, and the lowest mode is at 10 lumens.
Even with all that - it's a compelling package, and it looks pretty cool. I can see the appeal for cavers, or for consumers that have used the flood and throw beams on other headlamps and aren't willing to give the feature up.

The light measures 83.1 mm wide, 32.1 mm from front to back, and 25.1 mm tall. The height is not including the buttons, which protrude a fair bit from the body of the light. It weighs 59 grams on its own, or 106 g with the included cell. 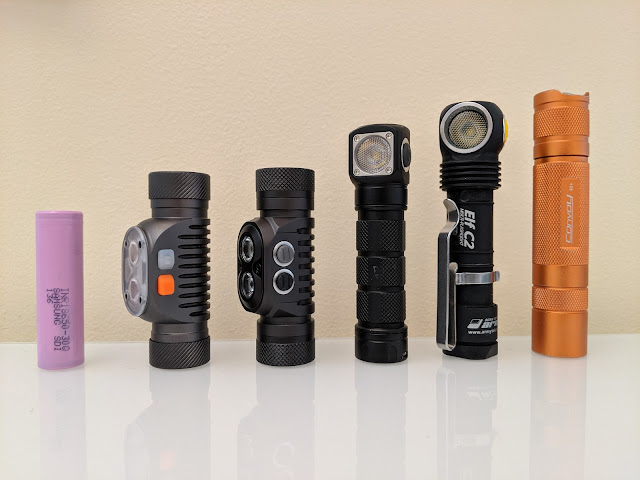 This light is made almost completely from aluminum with a dark grey anodizing. 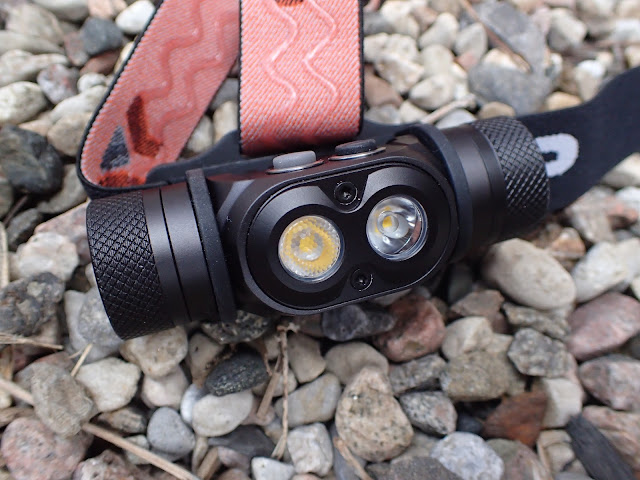 The front of this light is obviously the most interesting. There's an aluminum gasket holding the two lenses in place, screwed into the body. We can also see the two buttons protruding from the top of the headlamp, which makes them fairly easy to press even with gloves or cold hands. Both ends of the cell tube have similar caps with some light knurling to help with grip. 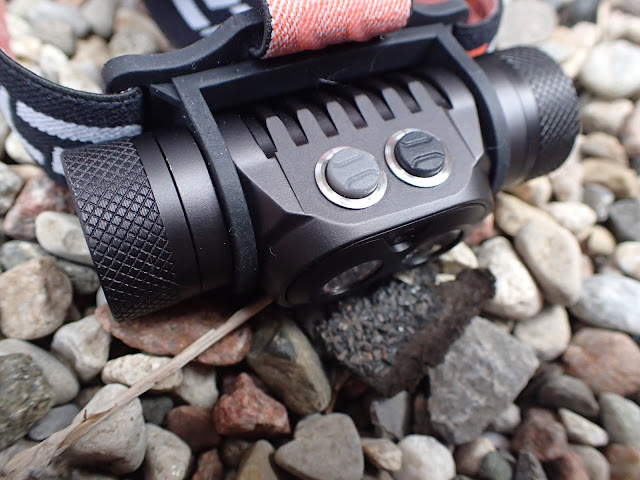 The two buttons are held in place by stainless steel rings. There are some shallow fins cut into the rear of the headlamp to help with cooling. 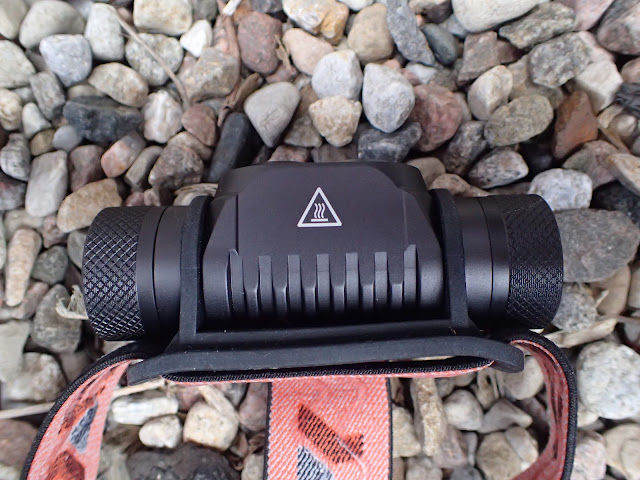 Not much going on underneath the light except a hot warning etched into the coating. Notable that this is one of only two labels on the light - there's no naming or branding anywhere on the body. 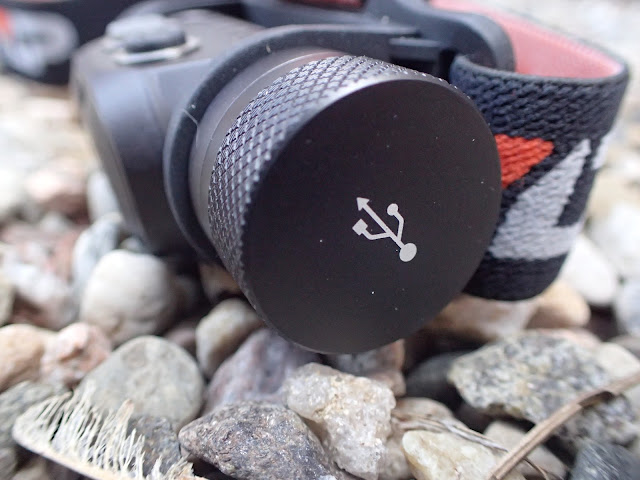 The other labeling is the USB symbol on the right endcap. 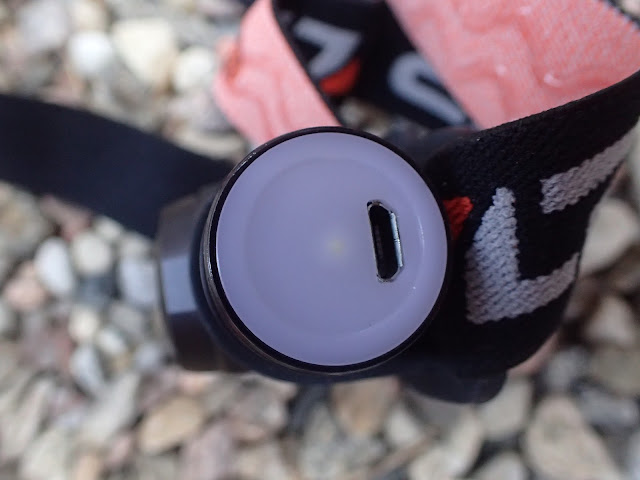 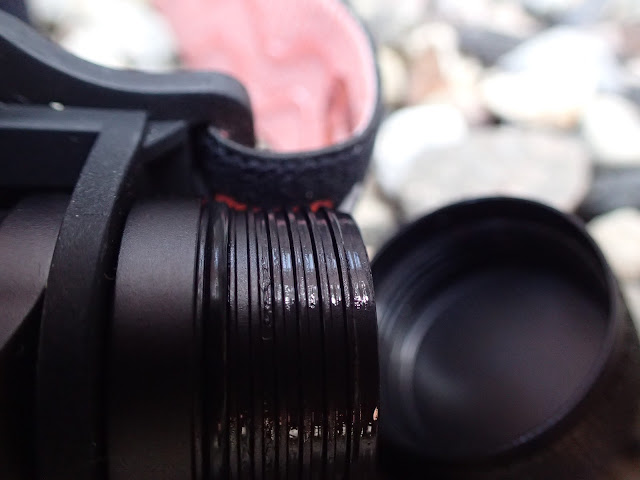 Removing this reveals the micro-USB port used to recharge the light. 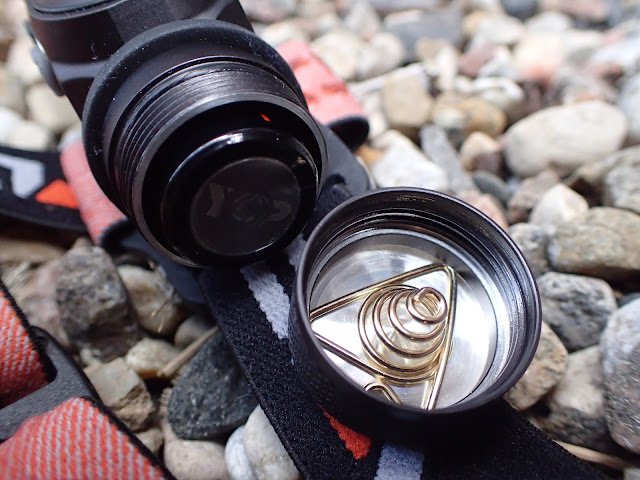 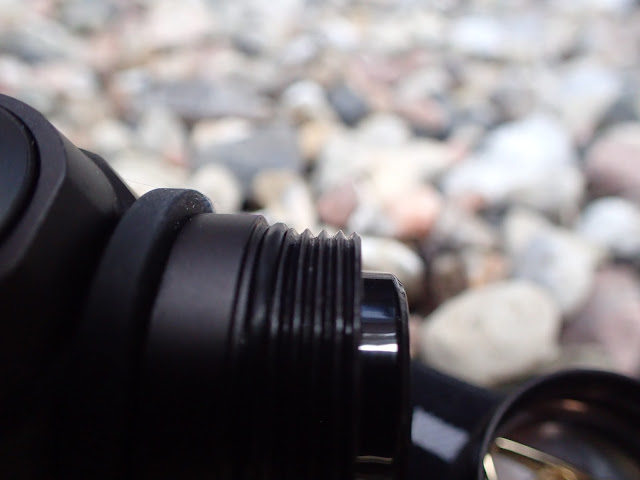 The other end cap is used to close the cell tube. The threads are anodized, so you can prevent accidental activation by backing off the cap a quarter turn. Each cap uses different threads, so there's no risk of mixing them up. The large spring serves as the negative contact for the light. 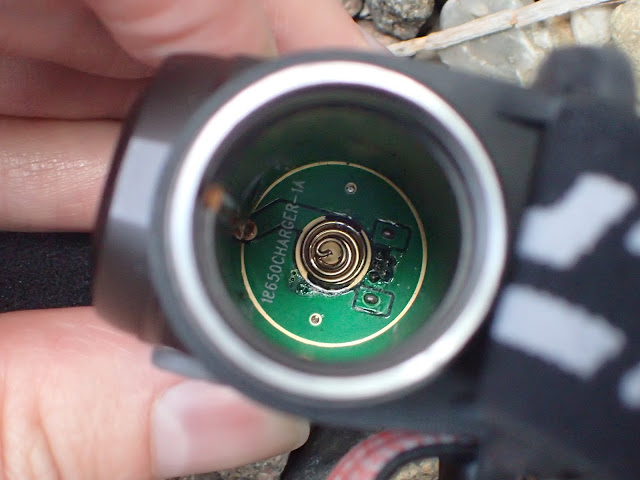 Inside, there's another spring serving as the positive contact.

The light comes in a snazzy black box with a magnetic closure. Inside you get:

One thing notably absent from this kit is the micro-USB cable needed to charge it, but I won't dock any points for that. These cables are standardized, and common enough that you're almost guaranteed to have a literal box full of them somewhere... (please tell me I'm not the only one).

This is a dedicated headlamp. It comes installed in a headband, and there's really very little reason to ever remove it or use it in any other way. There is no lanyard loop, clip, or magnet included... because it's a headlamp. 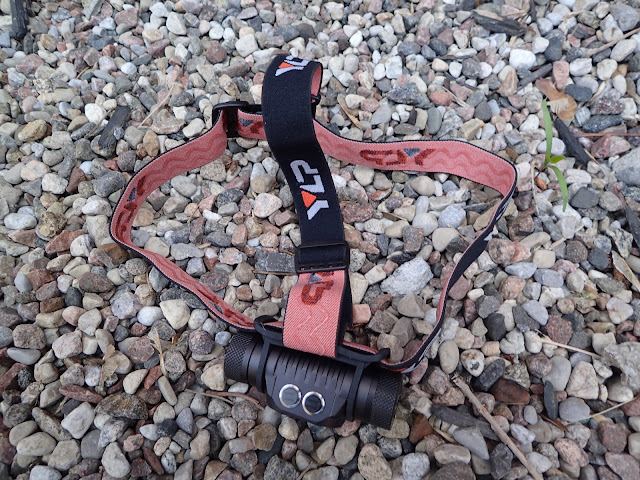 The included band is good. The adjustment works well, the headlamp doesn't bounce around too much, and the silicone bits inside the webbing help it stay in place. There are no reflective markers on the included headband. 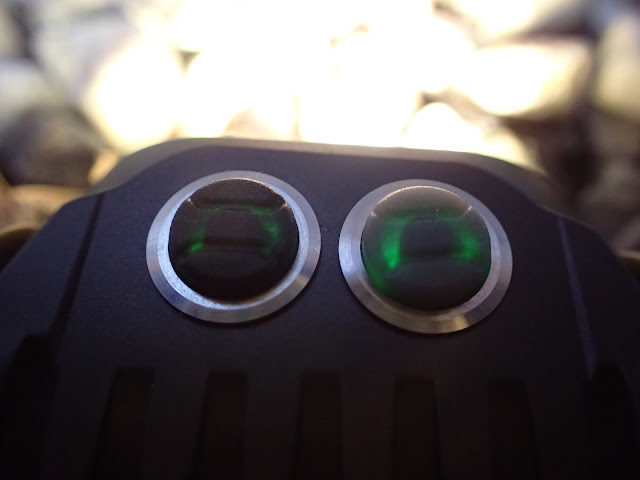 The flashlight is controlled by the grey (right) switch, and the left (black) one.

Overall the UI is easy to get used to and follows all the good basics - single press for on or off and hold to change levels. I've tried a number of lights from YLP now, and not a single one has had a bad UI. That being said, a low mode below 10 lumens would be nice to have on a headlamp that might be used for extended periods, and I do prefer how the Panda 2M CRI had more configurable options available.
Overall I find it a bit difficult to navigate through the two different emitter options, but as I've said, some people look for that feature. The shortcut to full power throw is certainly handy. 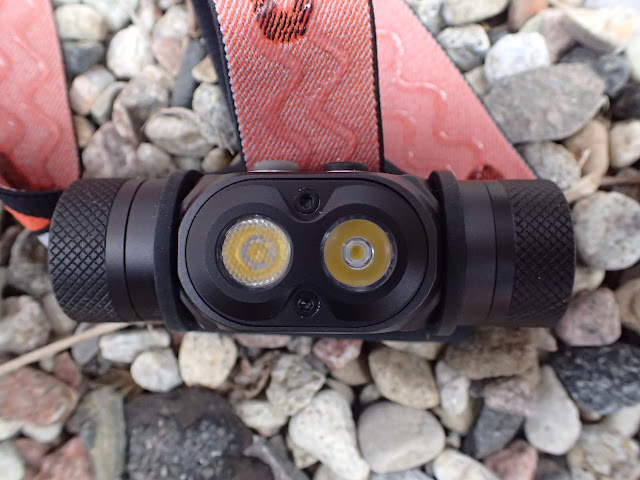 The combination of optics and LEDs used in this headlamp is pretty unique, and certainly interesting. There's an XP-G3 behind a honeycomb optic, which gives a wide diffused beam, and an XP-L Hi behind a smooth optic, giving a very noticeably throwy beam. Both are listed at 4000K, which sounds about right - they're a nice neutral to warm color that's great for the trails.
My only complaint here is that the XP-G3 is known to have some tint shift and a not-so-great beam. The honeycomb lens it's hidden behind does a good job of hiding as much of that as possible, but I wish that LED was replaced with the LH351D that was used on the Panda 2M CRI. A Panda 3R CRI with an LH351D in place of the XP-G3 and an SST-20 in place of the XP-L Hi might be even better. People coming from less enthusiast grade lights who aren't used to high CRI likely won't notice any of these negatives, and the beam is perfectly functional.

The light is powered by a single 18650 cell, and ships with a 2600 mAh button top cell. There are springs at both ends of the tube, so flat top cells should work without any issue.

Running both LEDs at full power gives a step down after a few minutes, settling around 30%. Although the runtimes are less stable than the Panda 2M CRI, there are no steep drops or other weird behaviours. It's worth noted that, on turbo, the light got quite hot - much hotter than I'd like something strapped to my head or tossed in a bag to get. I would suggest against using turbo for too long in a single go.
YLP does not list runtimes for the light on turbo, as it's thermally controlled and will vary depending on the environment - not completely unreasonable. The dual LED runtime on high is listed as 2.5 hours. I measured 3.3 hours, which is far longer than claimed - and that's with the included and relatively low capacity cell. A 3500 mAh cell should stretch this even further.
Standby drain was measured at under 30 μA, which means if the included cell was left in the light would take almost 10 years to run dead. Self discharge of the cell will likely have more of an impact than the electronics here. 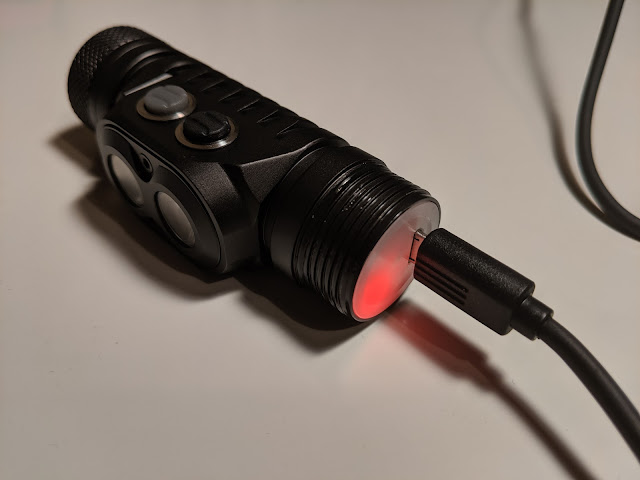 To charge the light, simply unscrew the end cap with the USB logo on it and plug in any micro-USB cable. I could see some potential for loosing this cap if you aren't careful, but I prefer this to the less than reliable rubber covers used on many other lights.

Charging looks great. It's just a bit over 1 amp, with a good CC-CV curve, and proper termination. The two tests were extremely similar, and the indicator LED changed from green to red right when the test completed.

Teardown is a bit of an exaggeration, but I like using that scary word to remind any readers that this isn't recommended. Anything that requires tools has the possibility to void your warranty, depending on how badly you mess it up and what sort of mood your warranty provider is in - but people like to see the guts. 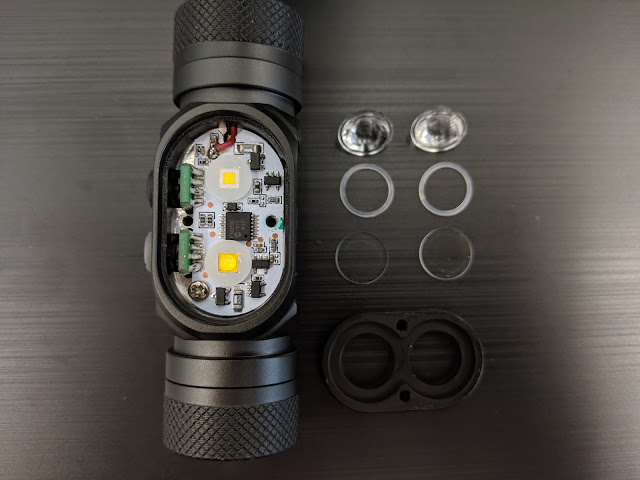 The two T6 screws holding the metal gasket in place come out easily enough. The gasket itself is a tight fit in the body, and takes some wiggling to work it out, but nothing challenging. 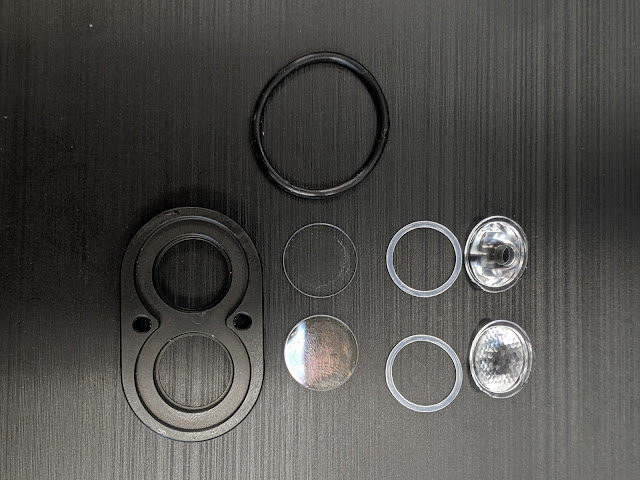 YLP did a good job making sure this unit was sealed - there's an o-ring around the metal faceplate, one on each of the optics, and another around each of the screws (not pictured). It's also nice to see two tiny, AR coated glass lenses used here to protect the soft plastic lenses from any scuffs. I'm really impressed with this design. 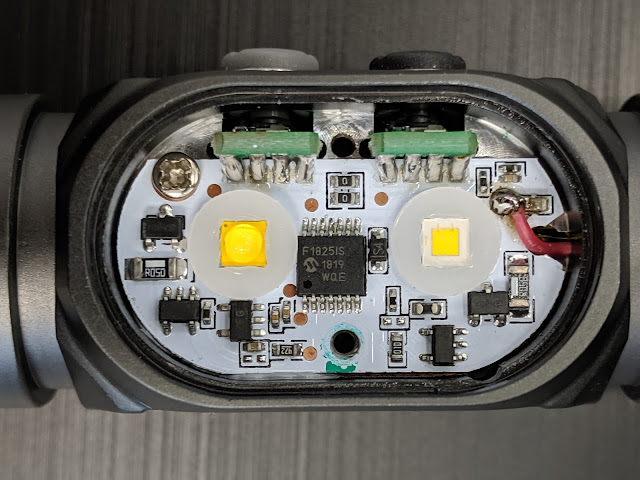 And here's the guts. The LEDs and driver are all on a single board, and the switches are mounted on the side of it. It's nice to see that the switches are mounted into cut outs in the aluminum, so the solder isn't the only structural support. The single board layout is probably bad news for anyone thinking of swapping emitters, but it's definitely possible for someone with the right skill set and tools. I also like to see that there's a screw clamping the board down to the heat sink, though a second screw to ensure even pressure would have been better.

This product was provided free of charge from the manufacturer. I was not paid to write this review, and have tried to be as unbiased as possible.
Manufacturer's product page, and the only place I can find to order this light at the time of writing
1x18650 Cree XP-G3 Cree XP-L Hi Headlamp Integrated charging Micro USB YLP