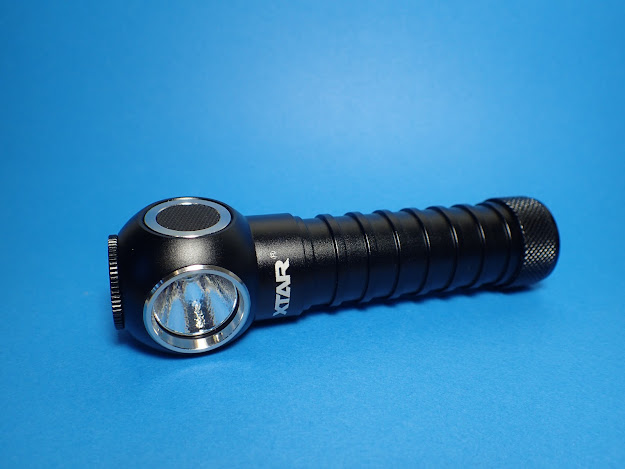 XTAR sent me their 'Magnemite' H3R headlamp to review. This is a right angle light with magnetic charging, powered by an 18650 or two CR123A cells. It includes an extensive set of accessories too.

I've tested a number of XTAR chargers, but this is my first light from them and I'm quite impressed. Primarily the intuitive interface and stable output make this ideal for a headlamp. I also really like the plethora of accessories that comes in the box.
Really the only things I did like are entirely preferences - I would prefer a warmer LED was used, and I like to have a magnet in the tail of right angle lights. 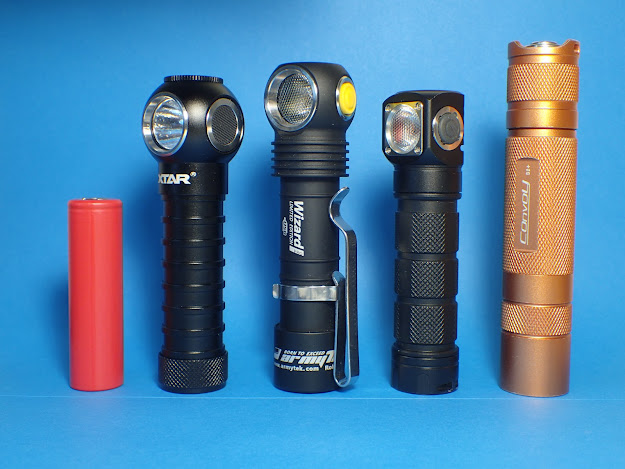 For a size comparison here's a lineup from left to right: unprotected 18650, H3R, Armytek Wizard Pro, Skilhunt H03 RC, Convoy S2+. This light is impressively compact, but with a bit of a bulbous head. 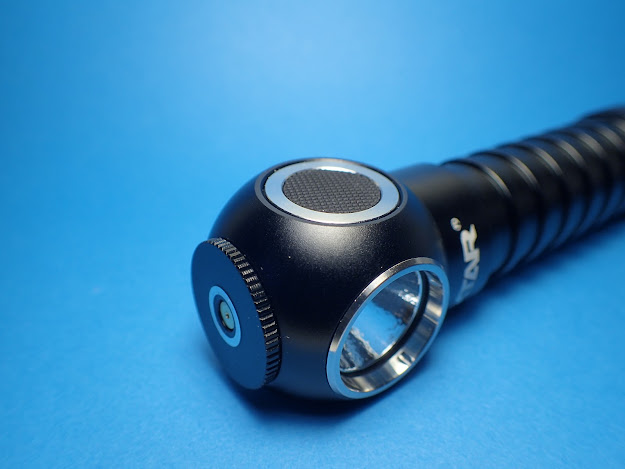 One side of the head is almost spherical. There's a flush switch on the side, the magnetic charging connector on the top, and the reflector on the front. A stainless steel retaining ring holds the reflector in place. 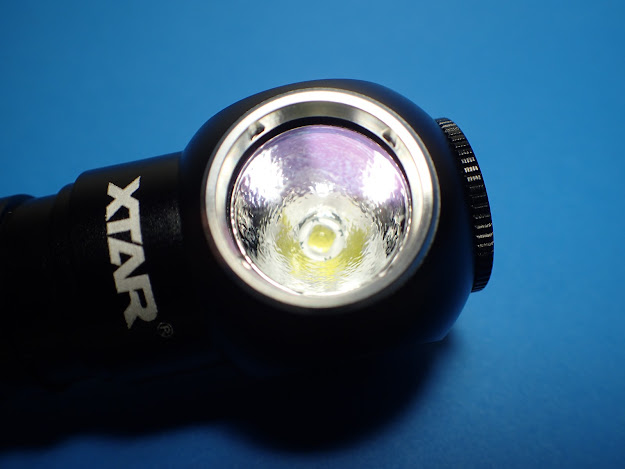 The glass lens has an anti-reflective coating to let as much light as possible out. 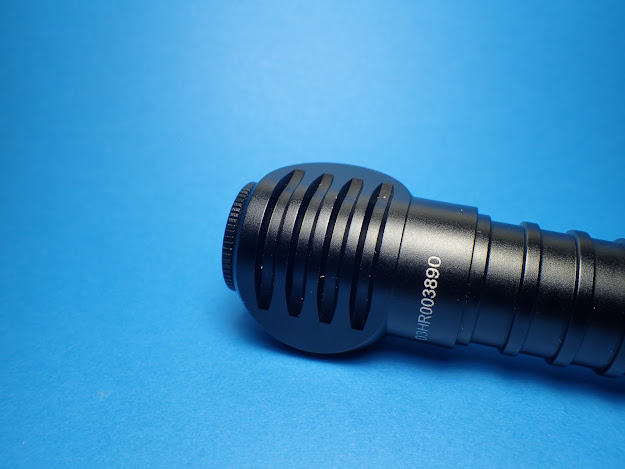 The reverse of the head has a few fins for cooling. 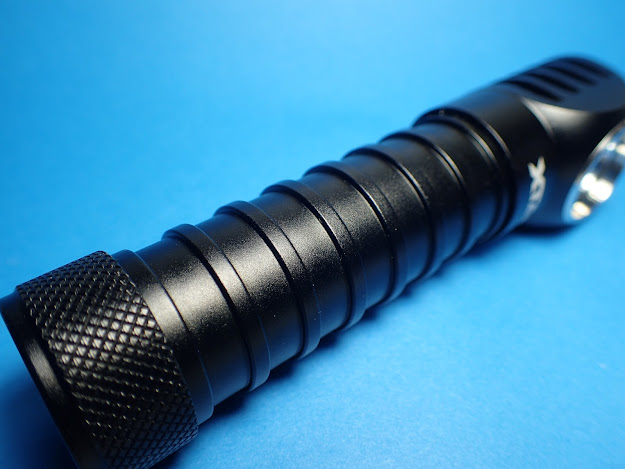 The body of the light is a fairly plain cylinder with a series of wide grooves. In addition to making the light easy to get a firm grip on, these provide a multitude of attachment points for the accessories. 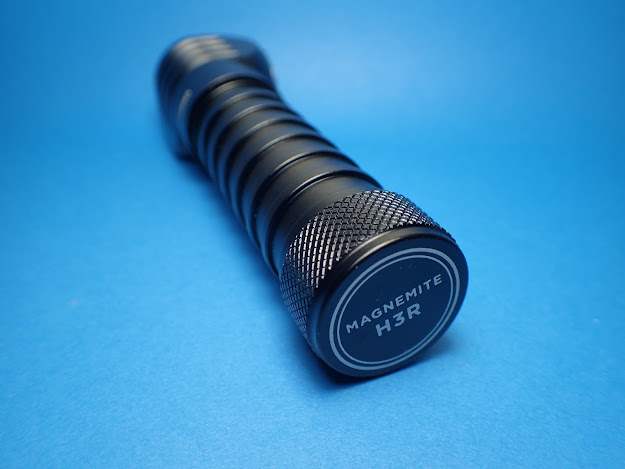 The tail is flat, so the light can tail-stand easily. Despite the name of this light, there's no magnet in the tail - a rarity for right angle lights. 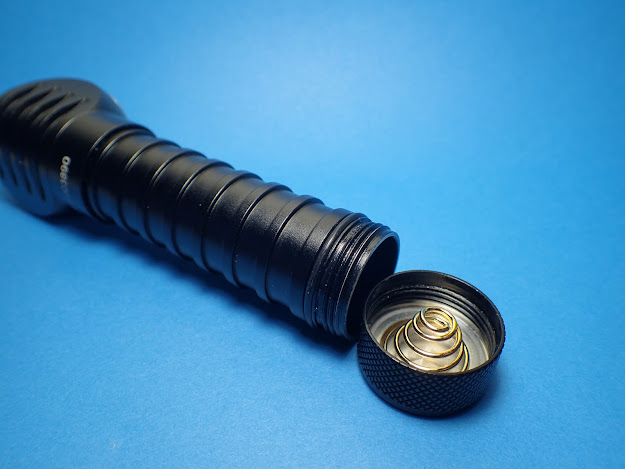 Inside the tail cap, a large spring serves as the negative cell contact. 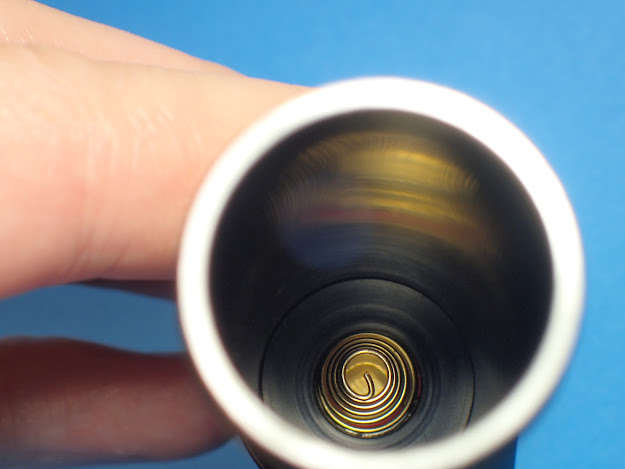 There's a second spring in the head for the positive contact. The head is not readily removable from the body tube. 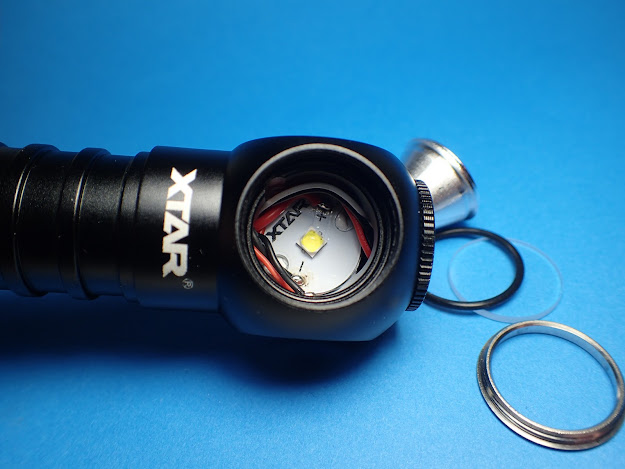 The indentations in the bezel can be used to unscrew it, which allows for removal of the glass, o-ring, reflector, and centering ring to reveal the LED. 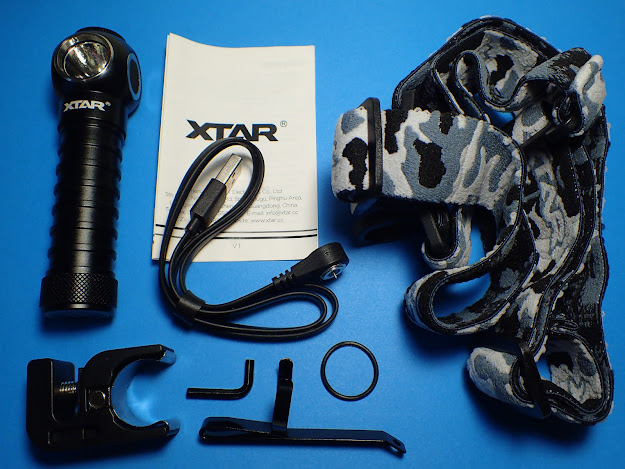 The light comes in a white box along with:

The ridges along the body give a good grip, and the switch is easy to locate. The switch is also extremely flush, which should help prevent accidental activation. 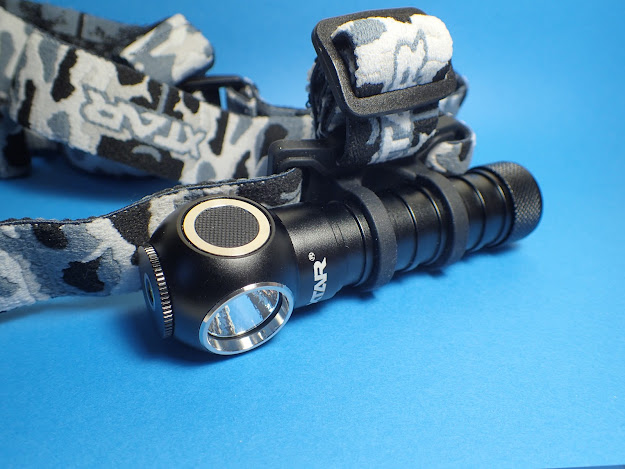 A headband is included to use this right angle light as a headlamp. It's a three-strap design with a flexible silicone holder, allowing the light to tilt freely. There's no reflective elements or silicone grip on the straps. 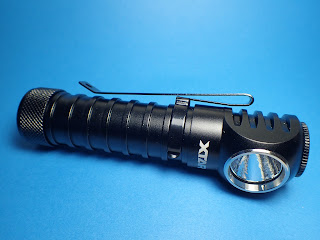 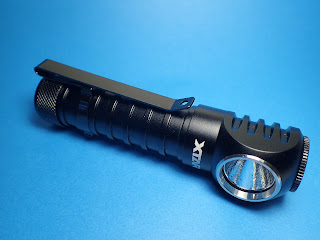 The pocket clip can be attached anywhere along the body for head up or head down carry. When carried head down, the clip can be mounted so that it extends even past the tail cap. 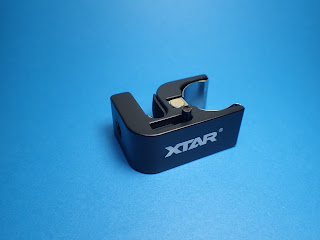 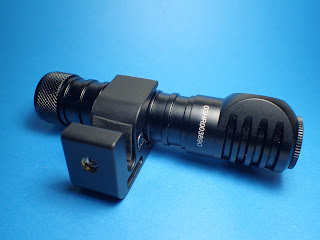 The included helmet clip allows you to fasten a bracket to a helmet, and could be useful for construction or caving applications. A screw fixes the bracket to the helmet. There's a small wrench included to tighten the screw that has a slot for storage within the bracket itself - but for regular use I would store it elsewhere. Connecting the light to the bracket is a solid friction fit.
As mentioned above, I was surprised to find that a light named 'magnemite' is lacking a magnet in the tailcap, which would have been a nice feature. 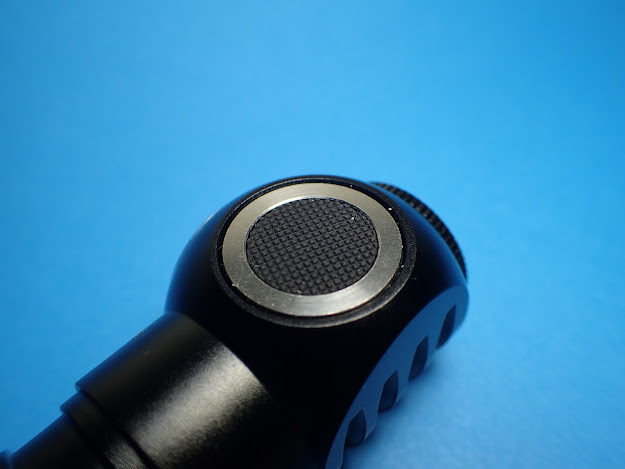 A single side switch controls all functions of the light. Operation is as follows:
This is a variation of a very common UI, and for a good reason - it's intuitive and easy to use, with plenty of features.
Advertised modes: 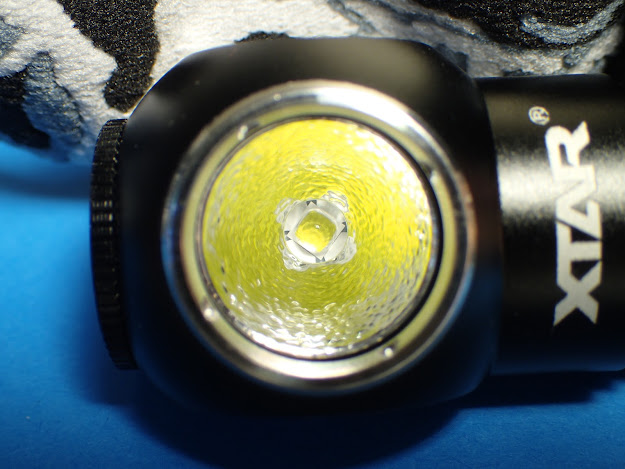 This light uses a cool white XP-L HD in an orange peel reflector. This gives it a much narrower beam than many other headlamps, great for seeing things at a distance. 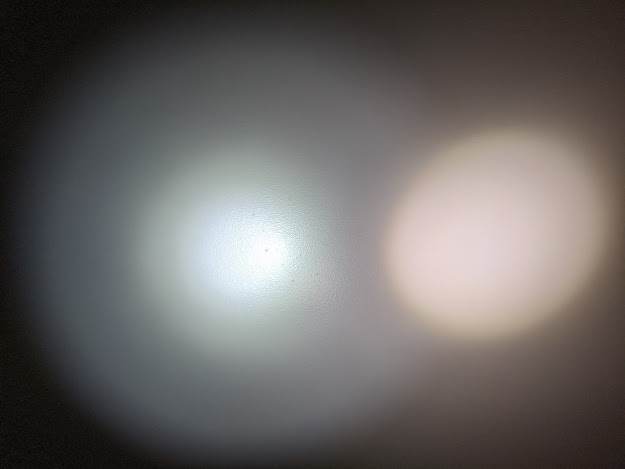 Compared to the 4500K Nichia E21A, the H3R is much cooler, with some tint shift across the beam.

This light is powered from a single 18650 cell, two CR123A cells, or two 16340 cells. All my testing was done with an 18650. The light will accept protected or unprotected button or flat tops without issue. 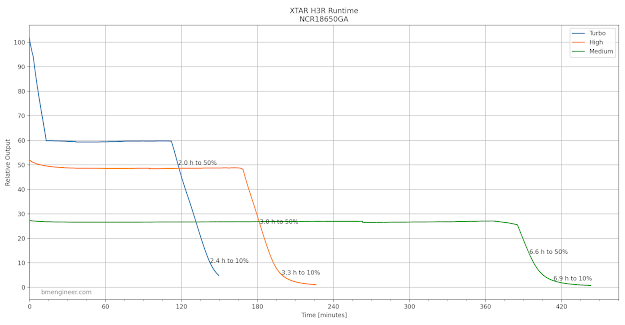 There's a step down to 60% from turbo, but all other modes are very stable for the duration of the run. Measured runtimes were slightly lower than advertised, but within a margin of error. I'm always happy to see such stable output, especially in a headlamp.

To charge the light, simply attach the included magnetic cable to the port on top of the head. Note that the charging only supports 18650 cells. 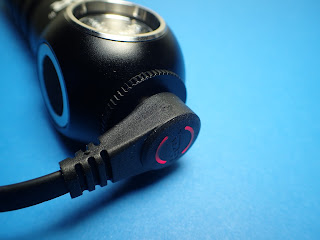 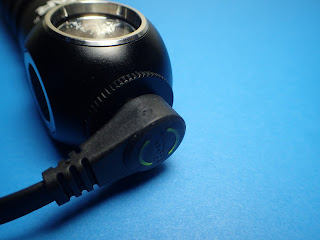 There's an indicating LED built in to the charging cable that's red while charging, and changes to green when it's fully charged.

Charging was measured from the USB port, bringing the cell from dead to full. The light charges at about 1 A before a long CV phase, terminating at about 0.7 A. Looks like a good charge.

This product was provided free of charge by the manufacturer. I was not paid to write this review, and have tried to be as unbiased as possible.
Manufacturer's product page
1x18650 2x16340 2xCR123A Cree XP-L HD Flashlight Headlamp Integrated charging Magnetic charging XTAR