Nitecore sent over their latest high output light from the Tiny Monster lineup, the TM9K. This is a beast of a light, with an internal battery powering 9 LEDs for massive output, and a USB-C port for charging.

This is probably the most impressively small 21700 light I've used so far, especially when you consider the massive output. It's also the first light I've used that can charge with a USB-C to USB-C cable, and one of the fastest charging lights I've tested. The UI is great as well.
I'm not a fan of the tint chosen, but for the 'tactical' market this is aimed at it probably won't matter to most buyers. Likewise, I wish the cell wasn't sealed inside the light and that turbo was a bit more conservative (or had a more moderate setting it could be configured to for longer lasting bursts).
Overall if you want 9000 lumens with built in charging that can fit in a pocket, this is probably one of the better options on the market.

The TM9K measures 129 mm long including the switch, which protrudes from the tail. The widest part of the head is 39.5 mm across, and the body is 26.0 mm wide. It weighs 226 grams. 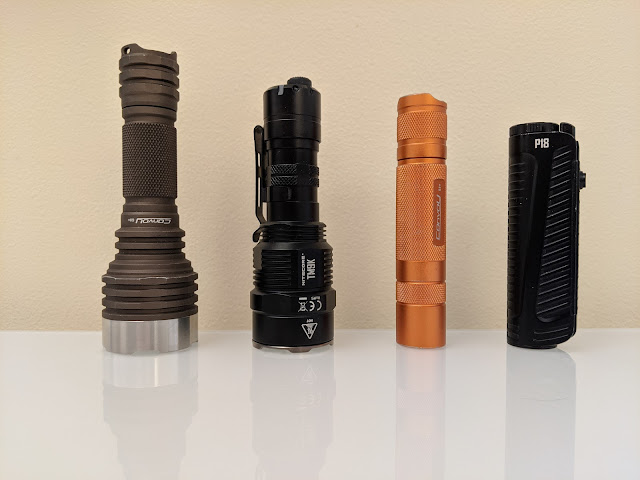 Considering the larger 21700 cell this has inside and the massive output, it's crazy small. You can see here that it's considerably shorter than the Convoy C8+ and smaller in diameter at the head, though it's slightly longer than the Convoy S2+ and Nitecore P18. 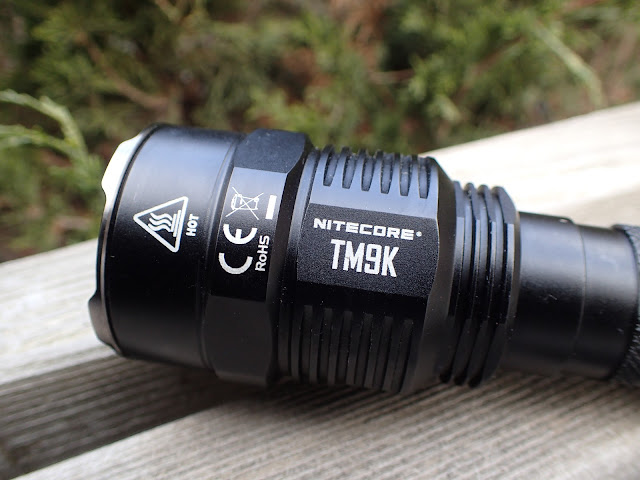 The head of the light has a crenelated stainless steel bezel, and is quite long (about a third of the light). There are some shallow fins along the head for cooling, and cuts into the widest portion to prevent rolling on flat surfaces. 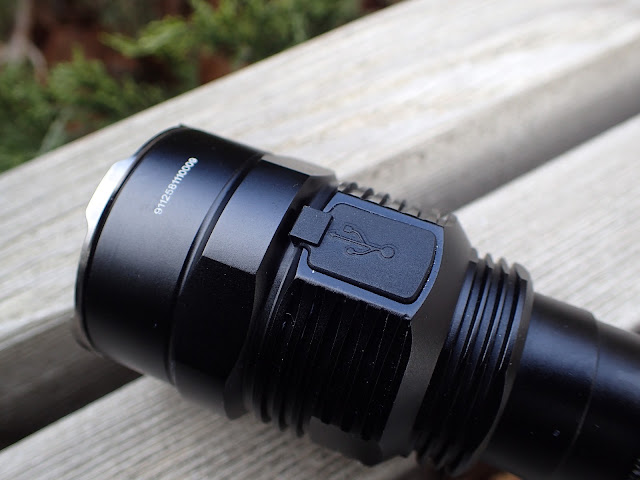 A rubber cover keeps dust and water out of the charge port. 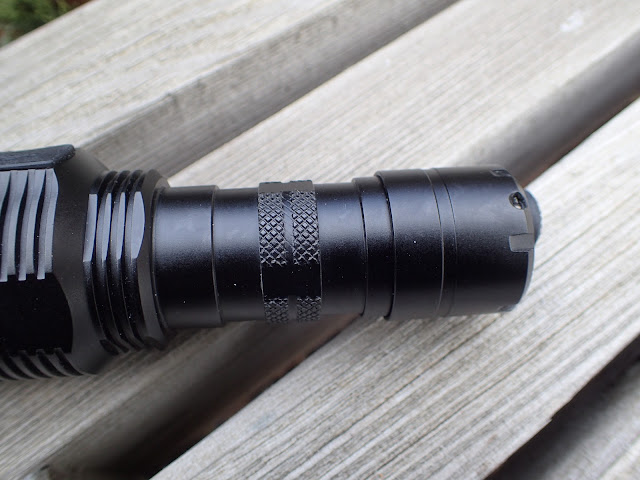 The body is short and has two spots to attach the pocket clip. 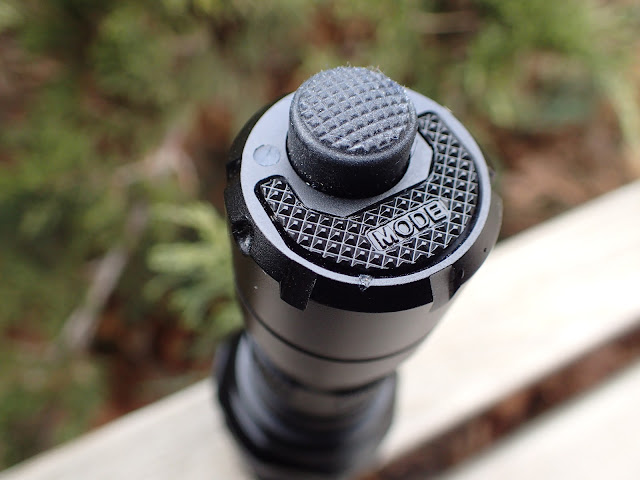 The tail switch is proud, so the light will not tailstand. There's two switches here, as well as a blue indicating LED. The tail unscrews on my sample, but I'm not sure if it will be sealed on production samples. 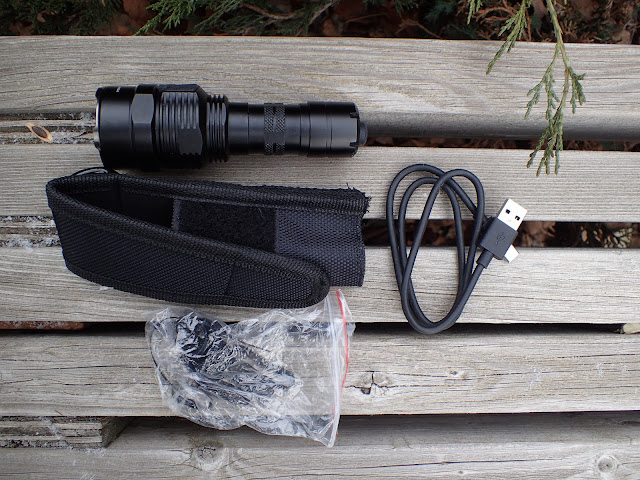 Good question! This is a pre-production sample, so I don't have a good idea of what the final packaging will look like. Nitecore lists it as coming with the following on their site, in addition to the light istelf:

This is a small light, but it fits great in my hand. There isn't too much weight at the head, and both switches are extremely easy to locate and identify. 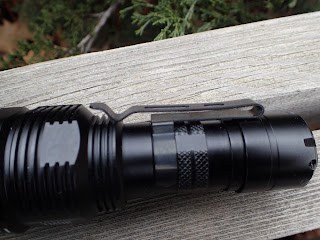 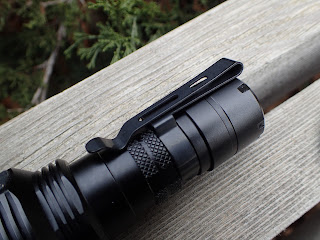 There are two spots to attach the clip, though only head down carry seems to make sense for this light. The first spot leaves the tail protruding and makes it easy to grab, while in the second position the clip extends slightly past the tail. I like the profile of this clip with the long section parallel to the light, but I'm unlikely to use it with a large flared head. 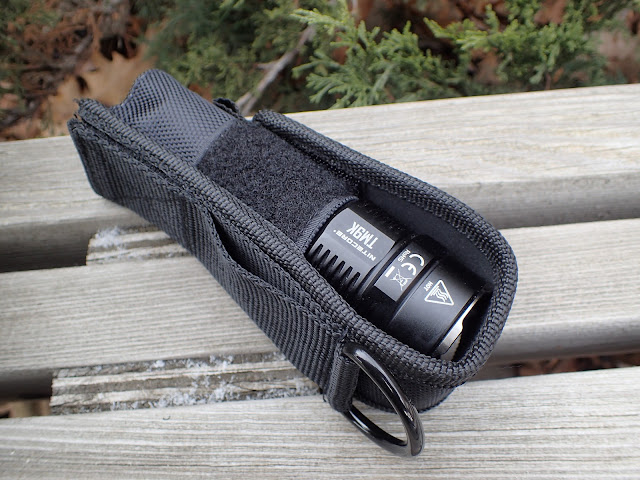 The included sheath is intended for head up carry and has a D-ring, a fixed belt loop, and a hook a nd loop belt loop. 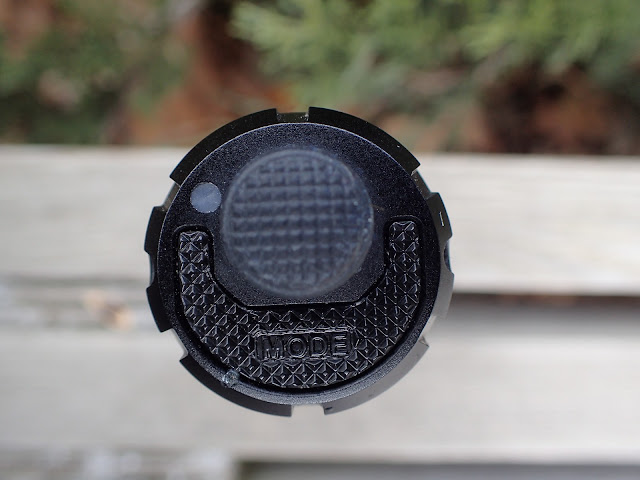 Two switches on the tail control the light, one forward clicky and one "mode" e-switch.
The UI is as follows:

With such massive output, lockout is borderline a safety feature so I'm glad to see it implemented here. I've long been a fan of lights that give momentary access to turbo when on in another mode, so I'm glad to see that here too - I find a short burst of high output great for taking a look in the distance outside without having to fiddle with double clicks or cycle through all the modes to get back to the one I want. Overall it's a great UI, and there's nothing about it I wish I could change. 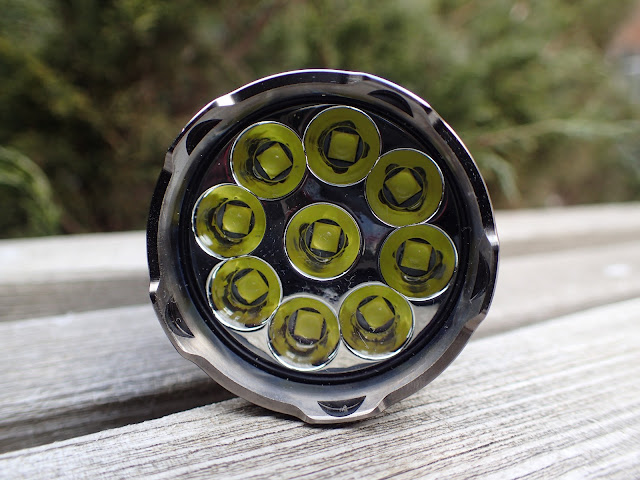 This light uses 9 cool XP-L HD emitters, each with it's own small reflector. 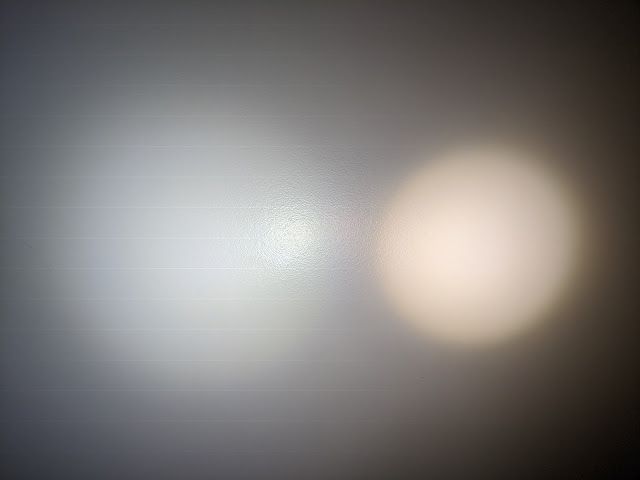 Comparison to a 4500K E21A shows the beam is fairly smooth, with a touch of tint shift at the edges. Note that there appears to be some PWM in this photo, though I didn't find it noticeable in real world use.

The light is powered by an internal 21700 cell that isn't readily replaceable.

High stepped down to the same level as medium after about 6 minutes, and lasted almost 4 hours (much longer than the 3 hour claim), while the mid level was very close to the 4.5 hour claim. Both outputs were flat and stable after the initial stepdown on high.

Turbo is momentary only, and will only hold it's output for about 10-15 seconds before stepping down to high. This mode is not meant to be used extensively, but could be just what you need to check a yard or light up a room for a few seconds and see what's going on. After it times out you can reset it - the graph above shows me turning the light on in turbo for about 25 seconds before resetting it another 5 times.

To charge the light, just plug in the included USB-C cable to any power supply you have on hand. I don't love that it relies on a rubber flap to keep moisture out, but it should do the job just fine. The indicating LED flashes while charging, flashes quickly when quick charging, and turns solid when charging is done.
I want to talk about that built in battery for a bit. It's annoying that the user can't replace the battery, but I get why this decision was made. There are a few "enthusiast" lights on the market that require certain high powered lights to work, and are available from only two online stores in the world. Both of those stores sell the required battery. Somehow people manage to find out about these lights, find the stores they're sold in, order the light - and then pick up a protected cell that doesn't fit and can't support the high current draw. The end result is frustrated customers and potentially dangerous combinations.
That isn't to say I want more lights with built in cells - I think shipping a light with a cell included is enough, or maybe requiring a tool to change it. But I get why this decision was made, especially for a light that is widely available to consumers on Amazon and other mainstream vendors. I would be much more bothered if it wasn't for the extreme output this light is capable of, and even the extreme rates it charges at.

There's some interesting behavior with the charge current pulsing, but that's not a concern. The cell was charged at a rate of 1.5A and was complete in under 3.5 hours. This light also negotiated quick charging and was charging at 12V for these tests, which is why the Ah measurement seems off. Better still, this is the first USB-C light I have tried that seems to work with USB-C PD and charged with a USB-C to USB-C cable. Finally! 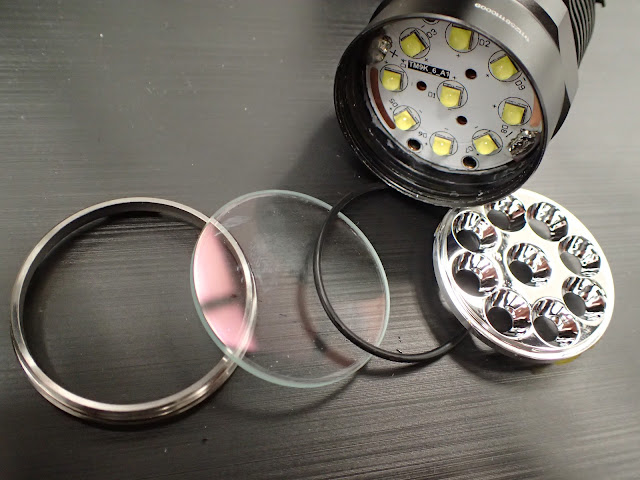 I was able to remove the bezel on my light, which released a surprisingly thick glass window, an o-ring, and the reflector. 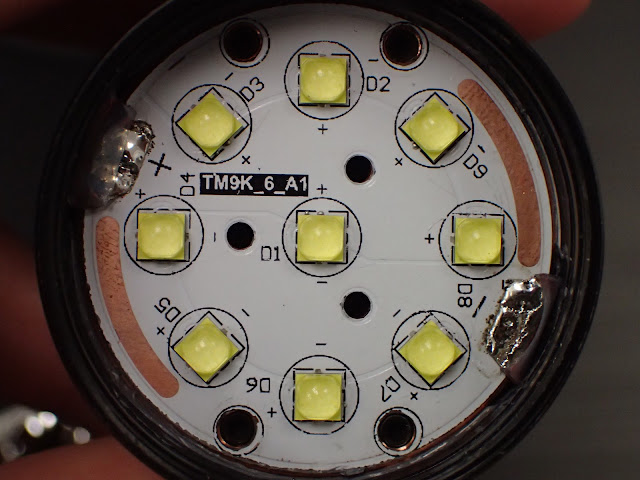 That's a whole lot of LEDs, and notably the light seems to use strips in place of wire for the leads. I would guess this was done to reduce resistance and to keep the light as small as possible. 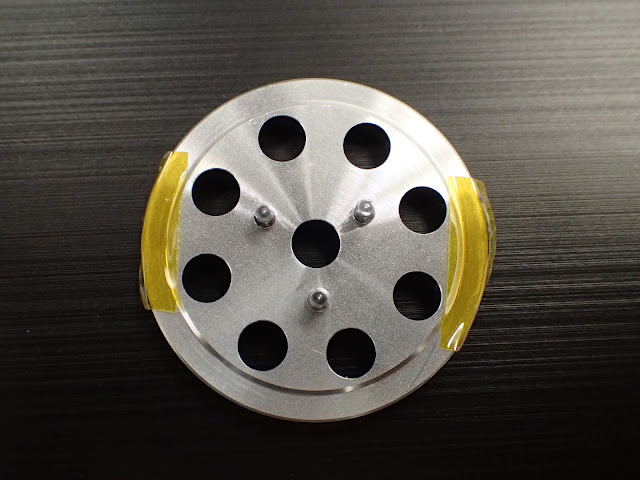 The underside of the reflector has three pins to align it properly with the PCB, which is useful since no centering gaskets are used on the LEDs on this light. There's also two pieces of kapton tape to prevent any shorts on the leads. 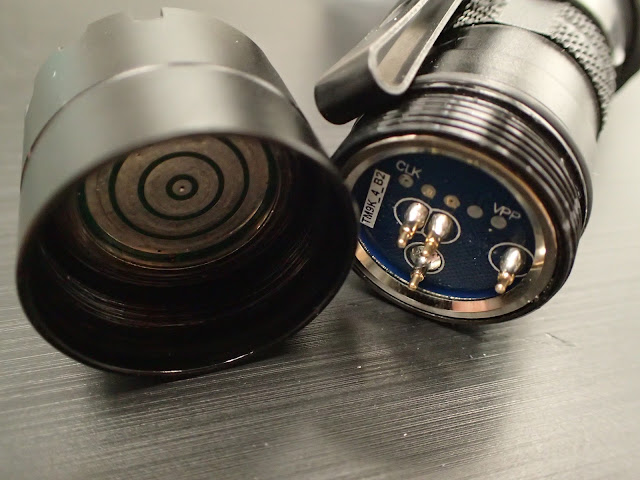 The tail on my light unscrewed readily, revealing a set of pogo pins that interface with traces on the tailcap itself for the switches and indicating LED. 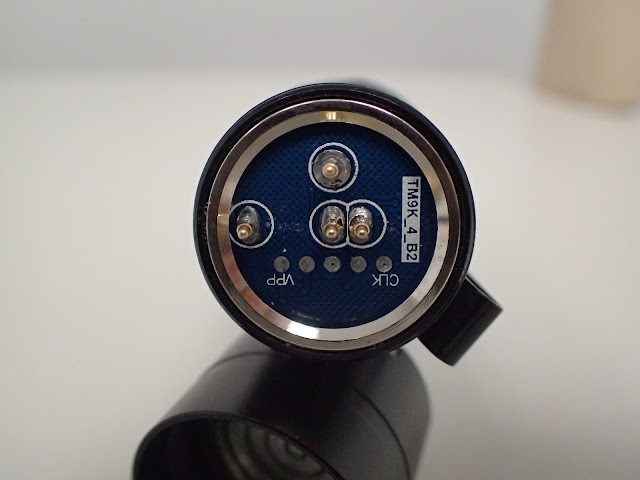 There are also what appear to be programming pads on the taim PCB. 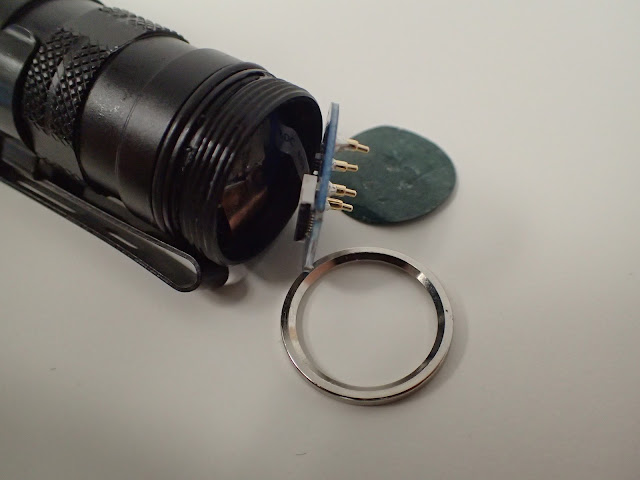 A press fit retaining ring holds the PCB in place, below which is an insulating pad to prevent shorts with the cell. 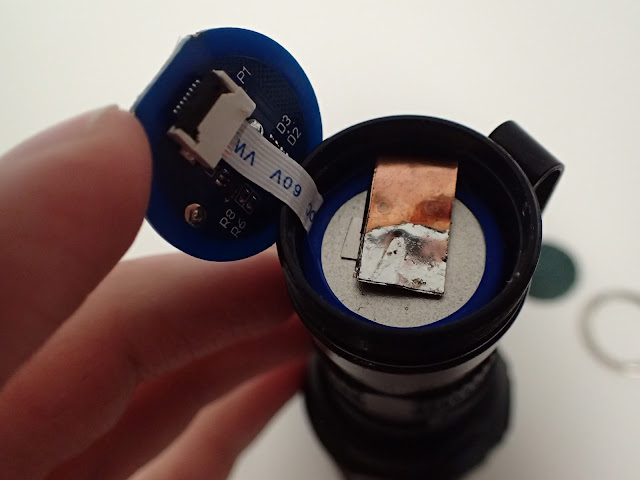 Here we can see the connector for the tail PCB and the soldered copper strip that connects to the negative terminal of the light. This will have much lower resistance than a spring, but at the expense of being able to remove the cell.

This product was provided free of charge from Nitecore. I was not paid to write this review, and have tried to be as unbiased as possible.
Nitecore TM9K listing on Amazon.
Official product page.
Cree XP-L HD Flashlight Integrated charging Nitecore USB-C