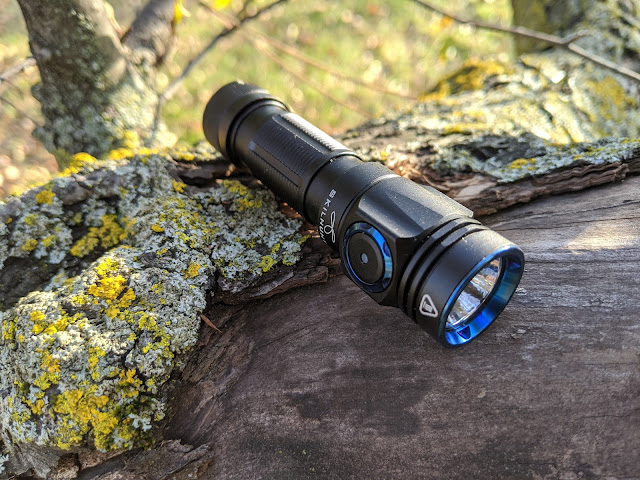 Skilhunt sent me one of their newest lights to review, the M150. This is a small light powered by a single AA or 14500 cell with a side switch, magnetic charging, and a magnetic tail.

I don't often use AA lights, but this one really surprised me. Although it's rare that these lights are significantly smaller than 18650 lights, the M150 is an exception. The UI is good, it supports both AA and 14500 cells, has built in charging, and an indicating switch. It's a great little light if you find 18650 lights too bulky to carry.
Since I received my sample Skilhunt has also launched a version of this light with a high CRI LED, which is just the icing on the cake - if you're looking for a compact pocket carry, I think that version would be a fantastic option. 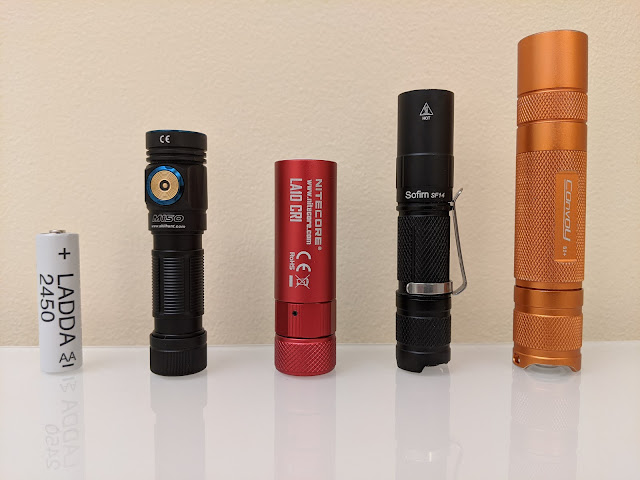 This is a fairly compact AA light - a bit larger than the twisty Nitecore LA10 CRI, but much shorter than the Sofirn SF14.

The light is made of aluminum with black anodizing and blue stainless steel accents. 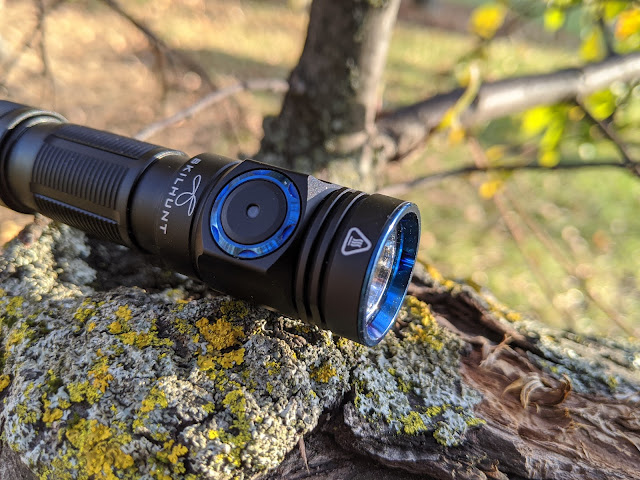 The blue stainless bezel is smooth, and threaded in place with three notches, so standard split ring pliers may have difficulty removing it. The head also has two small fins to help with cooling. 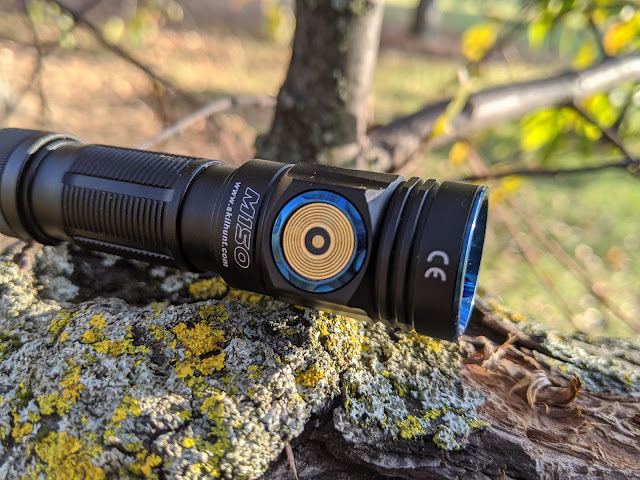 The next portion of the head is quite a bit wider to house the driver, switch, and charging connector. The flat sides make it easy to locate both of these components, but they are remarkably similar. The switch is almost flush with the stainless ring holding it in place. 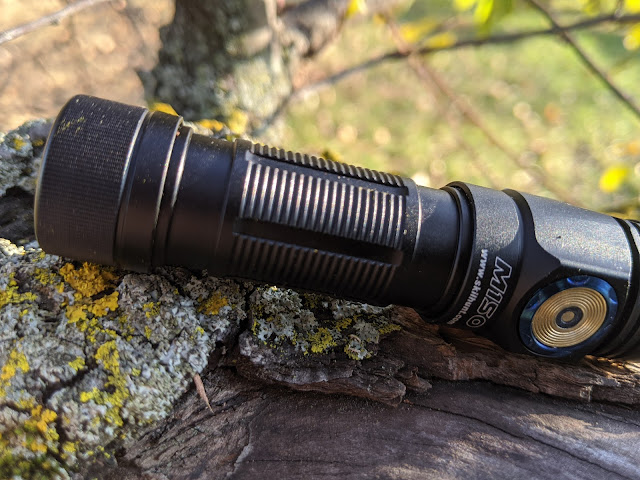 The body of the light is quire a bit narrower, with some fine ribbing giving an excellent grip. There's a groove at each end of the cell tube for clip attachment. 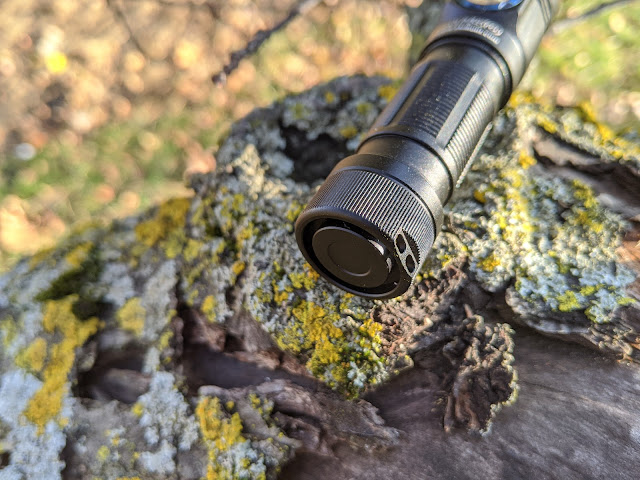 Finally, the tail has reeding around the perimeter to make it easy to remove. It's flat, so the light will tailstand without issue. 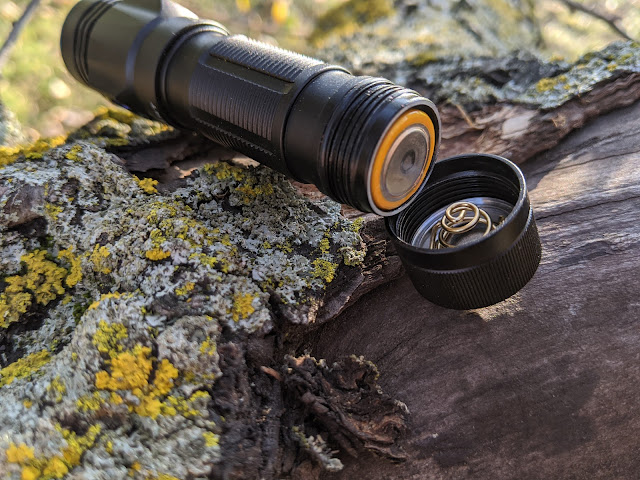 Inside the tail is a removable spring and a magnet. The threads are anodized, so you can mechanically lock out the light with a slight twist to disconnect power and prevent accidental activation. 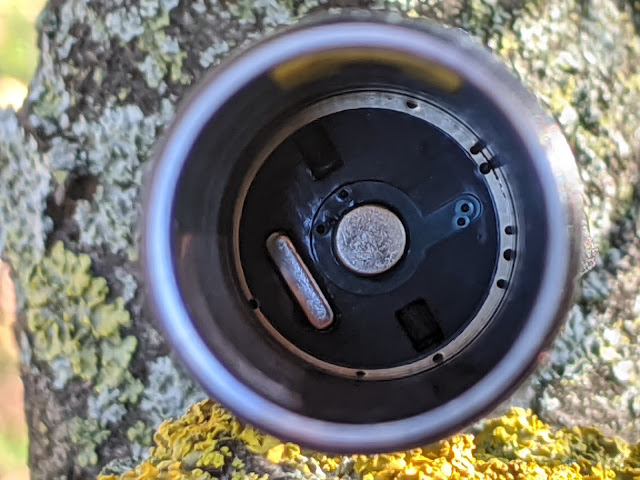 I wasn't able to unscrew the head from the cell tube, but I can see that the positive contact is a brass button with a small plate for reverse polarity protection. 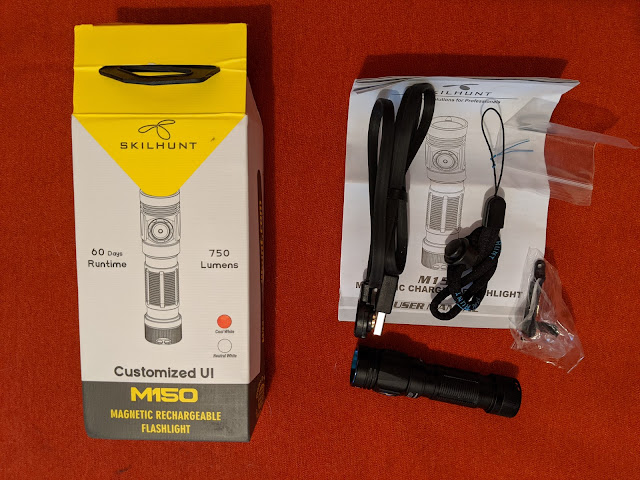 The light comes in a white and yellow box. Inside, you get:

The light is small and the ribbing along the body provides plenty of grip. The wider tail also keeps it securely in your hand, but does add a bit of bulk. The switch is easy to find. Although it can be confused with the charging connector, I usually just pinch the head to ensure I'm activating it. 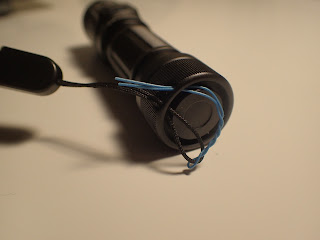 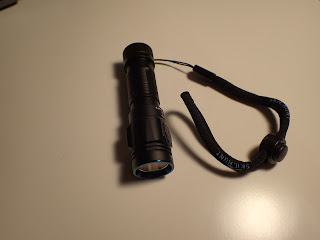 The included lanyard comes with a thread to easily get it through the tiny hole on the tail - a nice addition. 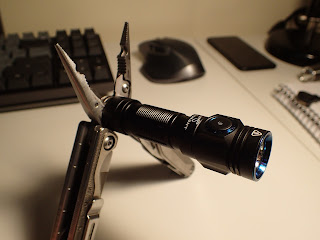 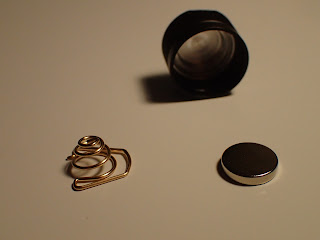 The magnet in the tail is strong enough to hold the light solidly at any angle. It can be removed by taking out the tail spring. 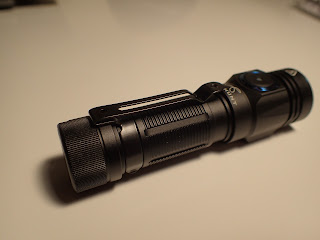 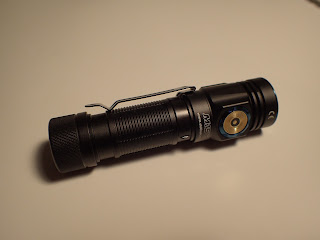 There are grooves on the light to position the included clip for either a fairly deep tail-up carry, or a much less deep head-up carry. The latter allows the light to be clipped to the brim of a cap for use as a makeshift headlamp. 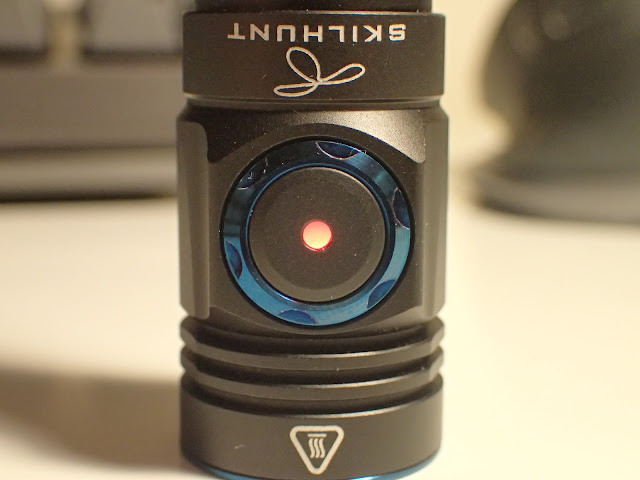 All functions of the light are controlled by a single side switch with an indicating LED in the center. The switch is easy to find and fairly flush, but not completely impervious to accidental pocket activation. There are two mode groups that can be toggled by holding the switch for 5 seconds from off.
In mode group A:
This is a fairly standard UI, but I'm not a huge fan of submodes and I dislike long press for off. In mode group B:
This second group gives a bit less configuration, with no way to access mid 2 or turbo 2, but I much prefer it overall. It's a great UI with all the features I like, though I wish it cycled from turbo to low instead of stepping back down.
The light has an electronic lockout you can activate in either mode by holding the switch for 1.5 seconds from off. While locked out, single press to enable or disable a locator beacon that will flash the switch LED every second. When you first turn on the flashlight in any mode, the indicating LED turns on to show the state of charge - a nice feature.
Claimed output on Turbo 1 is 750 lumens on a 14500 cell or 240 using NiMH. The lowest mode is a claimed 0.2 lumens with either chemistry. 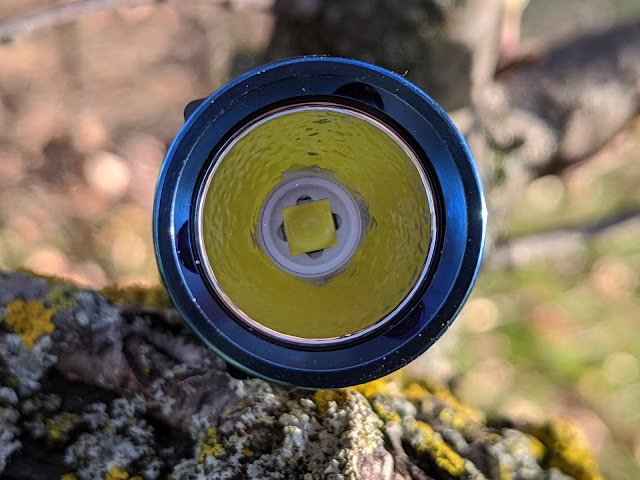 The model I'm testing has a cool white XP-L2, but since I received it Skilhunt started offering this light with a neutral white high CRI LH351D. That's the LED option you should choose if you're buying this light. 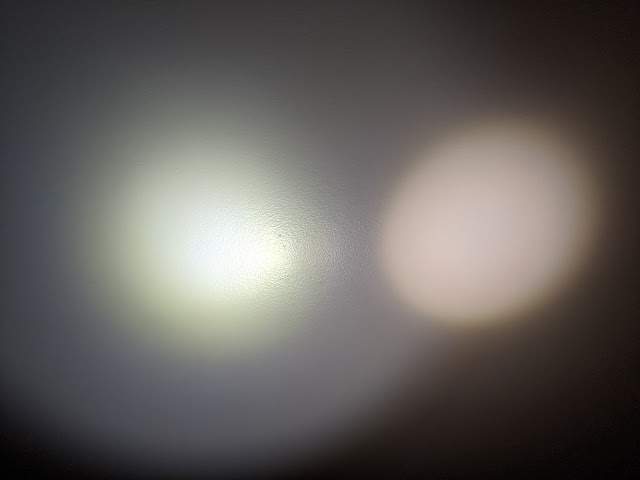 Compared to a 4500K E21A, the XP-L2 in the version I'm testing is cooler with some noticeable tint shift. 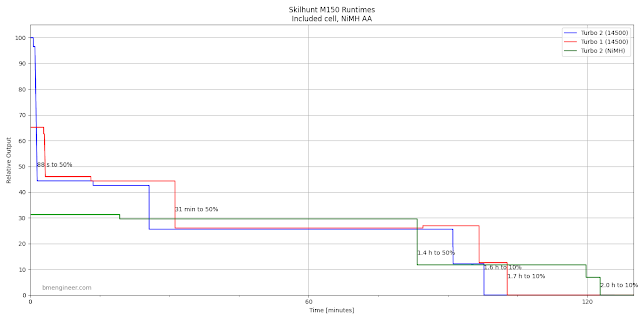 The highest turbo mode has a fairly aggressive step down, but the other modes are relatively steady. The light meets or exceeds the published runtimes for all tested levels.
Thanks to a tip off from @daisyhollydoodoo, I measured the standby drain on this light. There's negligible drain when the light is off, but it gets much higher when locked out. On either chemistry, the standby drain in lockout mode will drain the cell in over a year, which is negligible, unless the indicating LED is on. When that is activated, the current drain using the included cell goes between 5-8 mA (5 at rest, 8 while the LED is on). With an AA cell used instead, the current goes from 13-22 mA. In both cases, this means lockout with the indicating LED on will drain the cell in about a week. This is likely due to a poor driver design keeping the chip on the flashlight "awake" in this mode, and there's no reason for it to be this innefficient. 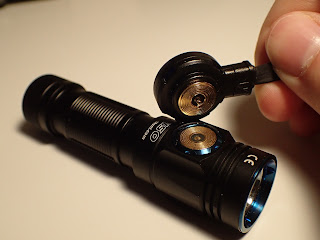 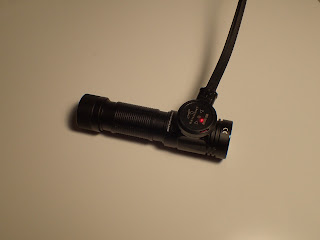 To charge the light, plug the included magnetic cable into any standard USB-A power supply. The indicating LED inside the connector glows red when charging, and switches to blue when complete. 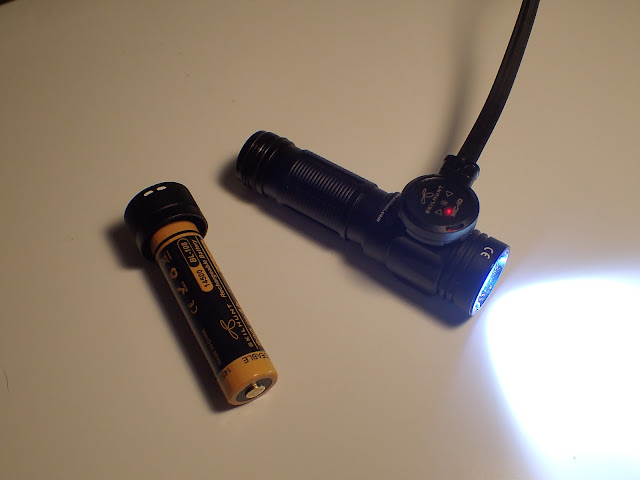 All functions of the light work when connected to USB power, and it will even work without a cell installed. 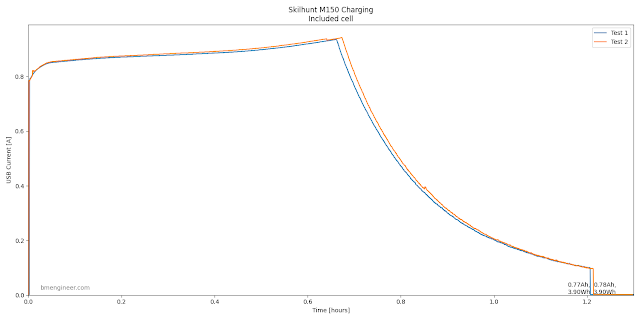 Two tests were done with the stock cell and had very similar results. It took about 1 hour and 20 minutes to fully recharge, with a peak current of 0.9A over USB and a cut off below 0.2A.

This product was provided free of charge from the manufacturer. I was not paid to write this review, and have tried to be as unbiased as possible.
Manufacturer's product page
Product listing on Amazon (affiliate link)
For more reading, check out Zeroair's review of this light.
1x14500 1xAA Cree XP-L2 Flashlight Integrated charging Magnetic charging Skilhunt