Lumintop continues to build off of the template that the FW3A set, but the X9L is a very different light. This keeps the tail e-switch, but is powered by a single 21700. The moderately large head uses a Luminus SBT 90.2 in a smooth reflector. The end result is basically a compact, pocketable thrower.

This was my first experience with the SBT90.2 LED, and far from my first experience with the FW series of lights - and it's a fantastic match. The larger head gives this light huge throw and better cooling than the smaller EDC-oriented models, but the beam isn't so tight to be only usable for long distances. It toes that line as the Dobermann does, and that's one of my favorite jacket carry lights.
Some of the ergonomics that are borrowed from the FW3x and FW1x feel a bit cramped when scaled up here, but it's still very usable. 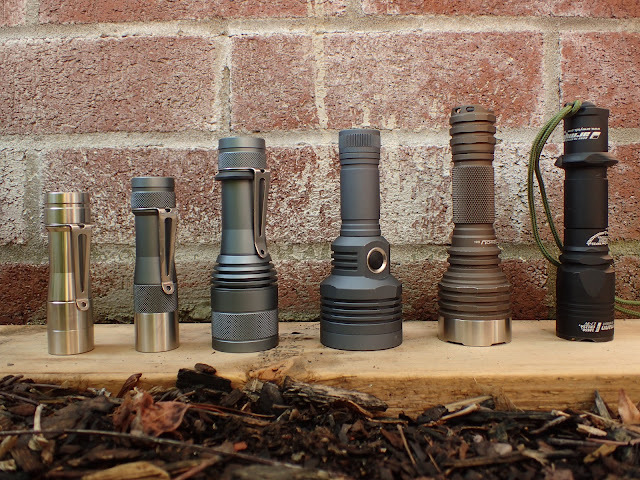 For comparison, here's a lineup. The FW3S and FW1A are to the left of the X9L, and on the right are the Emisar D1S, Convoy C8+, and Armytek Dobermann Pro. You can see this light compares most closely to the C8+, but it's slightly narrower and significantly shorter.

The light is made of aluminum with the same gray anodizing as the rest of the series. It's thin anodizing, but doesn't show wear too badly, and it's a great contrast to the heaps of plain black lights on the market. 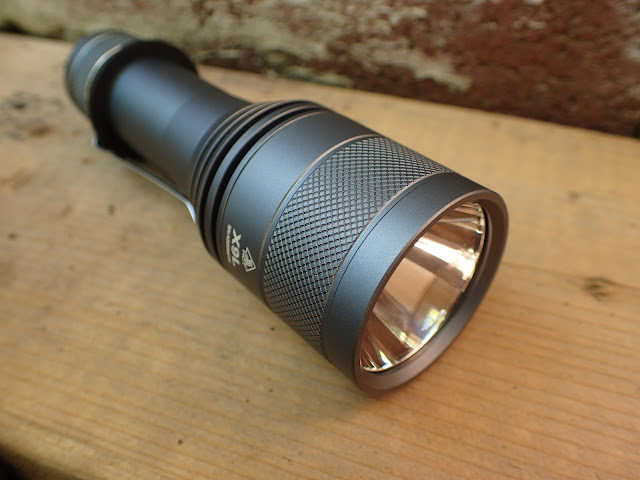 The bezel is smooth, and protrudes very slightly in front of the glass. The head is also reasonably thin, but quite long to accommodate the deep reflector. There's some light knurling to help with grip. Behind the head, deep fins help keep the light cool.
I like smooth bezels, but on a larger and powerful light like this I wouldn't mind some small crenelations so you can tell if you left it on while it's resting head down. 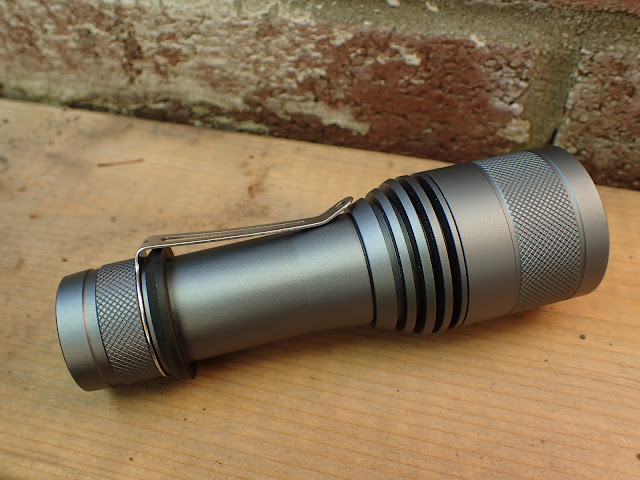 The cell tube has a nice taper in the center, with the tail being slightly wider to help with a 'cigar' grip if you choose to hold it between your index and middle fingers. There's more knurling on the tail, even though that's not where you unscrew the light for battery changes. 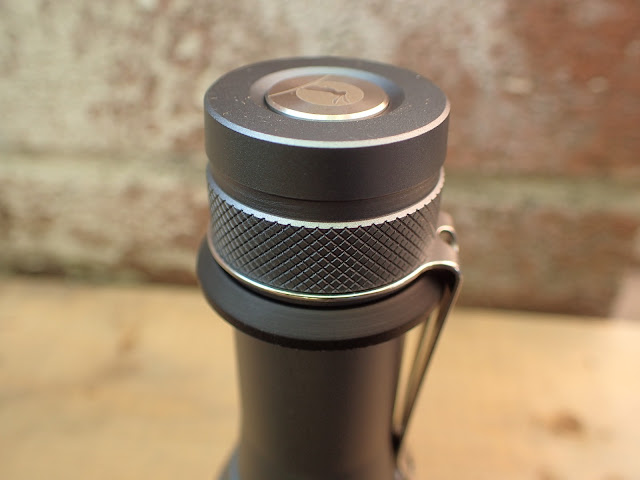 At the tail, the switch is flush. The light will tailstand without issue. The switch has a stainless steel cover with Lumintop's logo etched into it. 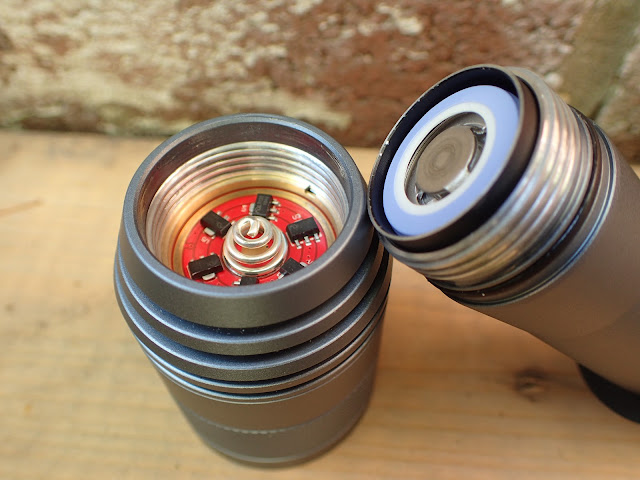 Removing the head gives a look at the magic that makes this light work - in order to connect the switch to the driver, the power transfers through the main body tube (like most lights), but there's a thin aluminum inner tube that transfers the switch signal to the brass ring on the driver. The threads aren't anodized so there's no true mechanical lockout, but loosening the head slightly will prevent the switch from making contact and prevent accidental presses from being detected. On this light, I think the electronic lockout is a better option.
You can also see here the thick, short spring used at the head for the positive contact. 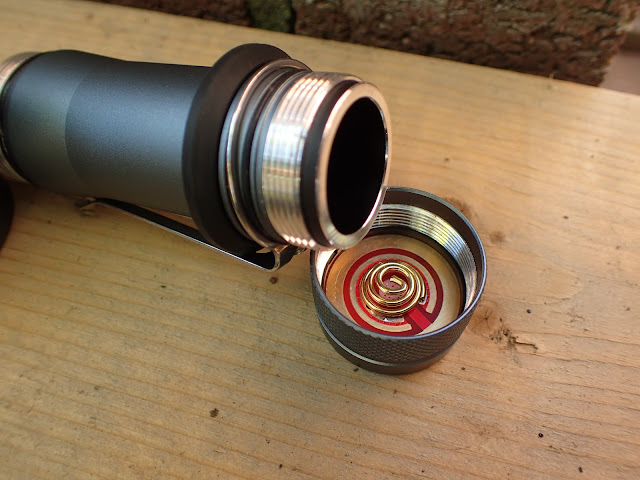 There's another short spring at the tail, which can be removed to install or remove the clip. As with all lights in the series, make sure the tail is on very tight before tightening the head. 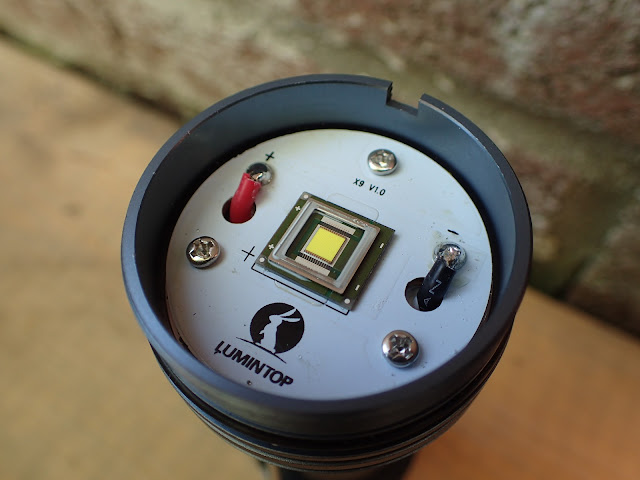 The bezel and reflector are easily removed as well, giving a look at the rather photogenic (and huge) LED used here. We can see that the PCB is well secured with 3 screws. There's also a key cut into the threads, which I can't imagine the purpose of. 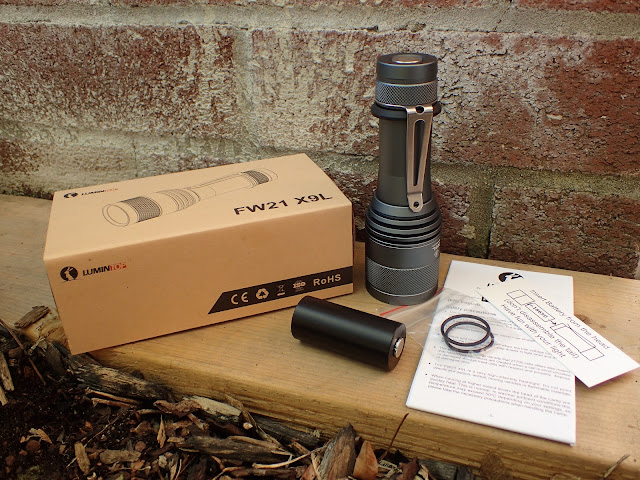 I find this light pretty comfortable in my hand. It's a bit short for an overhand fist grip, as my pinkie and part of the next finger end up resting on the head of the light, but it's surprisingly comfortable in a cigar grip. 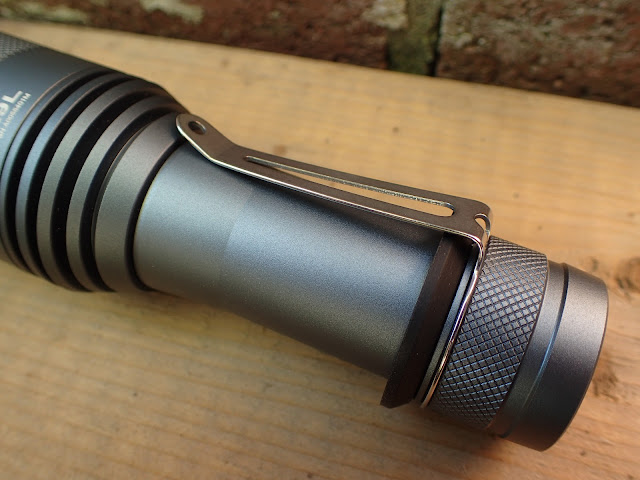 The clip on this light is captive, held in place by the tail - so you don't have to worry about it coming off accidentally. I don't typically use clips on lights of this size, but this one works well.
The second accessory is a grip ring, to give you a better hold and make the switch easier to press. It's convenient, but the smooth body means it can slide around. 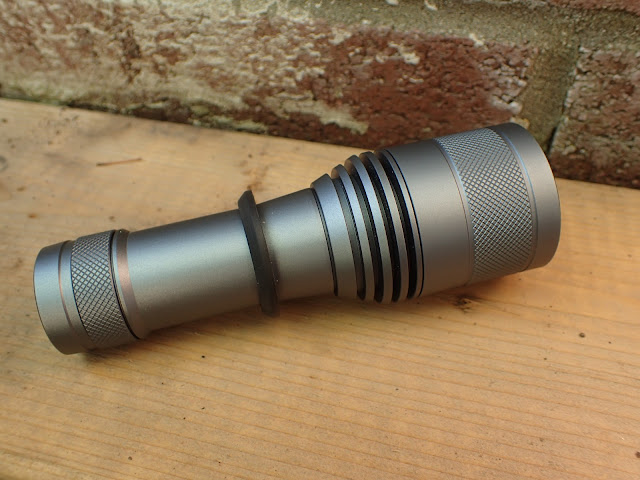 You can use the light with either, both, or neither of these accessories. There's no lanyard included, but you could thread one through the hole in the clip if you wanted to. The clip also serves to stop the light from rolling around, since it's round at all points otherwise. 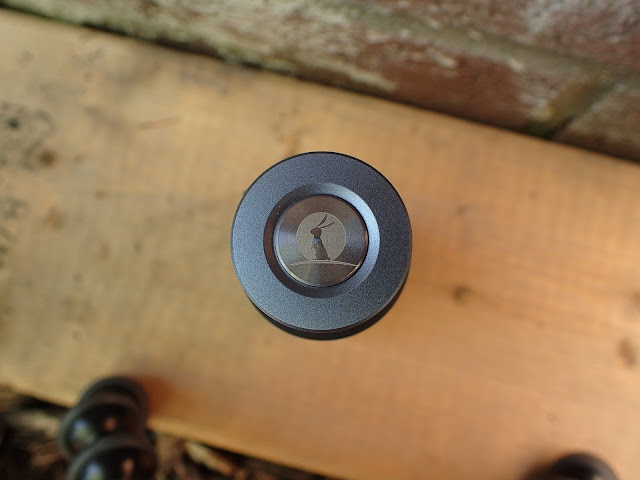 All features are controlled by the single tail switch which, unlike most tail switches, is an electronic switch. This allows it to use a more feature rich interface - Anduril, in this case.
Anduril is open source and extremely powerful and customizable. I won't cover every feature of that UI here (I don't think I could), but here's the basics that I use every day:
There's a ton of features, but it really does all the basics well. My one major complaint about this UI in a thrower is that there is no momentary turbo when you're using a lower mode. You can jump to turbo with a double click, and back down with another, but multiple quick presses can be difficult if you're wearing gloves or your fingers are cold. (Maybe this is a specifically Canadian problem). 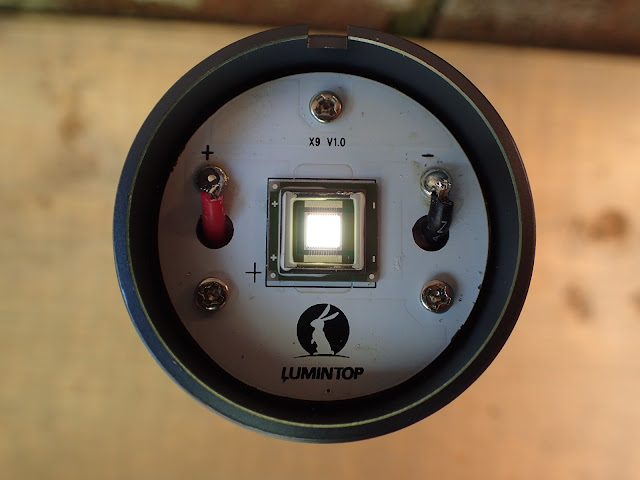 This light uses a Luminus SBT90.2 at the base of a deep, smooth reflector. This LED is fairly new and very unique. It's extremely powerful, while also making a fairly tight beam. With the reflector used, this gives a beam profile that I find just barely floody enough to use for general purpose use or walking around, and more than throwy enough to see off into the distance. This is just the sort of beam I like on a powerful light to toss in a jacket pocket when I go off on a short hike after dark.
The SBT90.2 is only available in cool white, so of course that's what is used here. I thought I wouldn't be a fan because of the CCT, but it's a fairly pure white and it works - I think the trade off for the huge output and decent throw is worth it in this light.

The light is powered by a single 21700 (or an 18650 with the included sleeve). There are springs at both ends of the cell tube, but since the light is made to be as short as possible only unprotected cells will fit. Some button tops may fit, but for the best results use a high drain, unprotected, flat top cell. This light can pull a ton of power, so I used a Samsung 40T. Neal offers the light with a 30T at a reasonable price, which would be a great choice for maximum power. 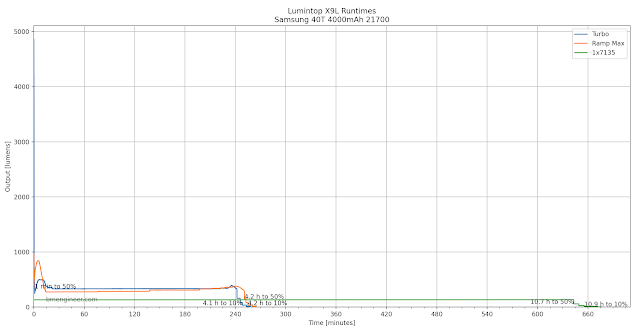 Runtime was tested without cooling, so this high output lights steps down very quickly. The runtime is fairly stable after the initial step down - but at 10 seconds it's already 3 times less than at turn on, and it steps down to about 20% for the remainder of the run.
Update: by popular request, below are two graphs showing temp and output vs time. The first is at full turbo (two taps from on), and the second is step 6 of 7 in the stepped mode.

This product was provided free of charge from Neal's Deals. I was not paid to write this review, and have tried to be as unbiased as possible. I had some input into this light's design, and I'm sure that impacts my ability to remain unbiased.
Product page on Neal's site.
1x21700 Flashlight Lumintop Luminus SBT90.2