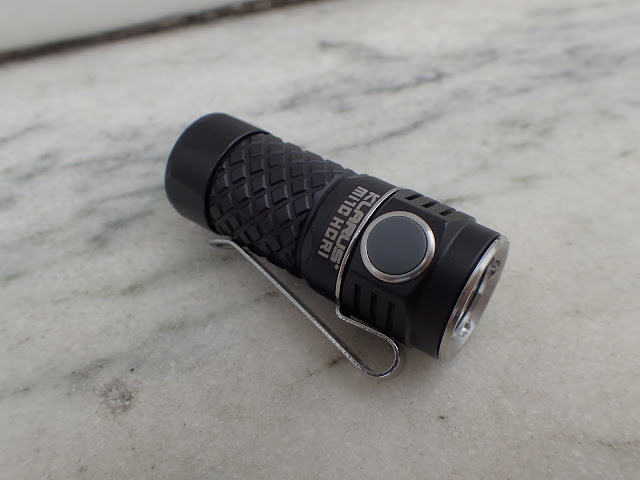 The Klarus Mi1C is another entry in the ever popular 16340 sized e-switch lights. These seem to be extremely popular with the EDC crowd, as they're some of the smallest lights that can still put out an impressive amount of light - it seems that Klarus, Olight, and Fenix are in a constant battle to make the smallest and brightest light in this form factor.
The Mi1C HCRI stands out from the crowd as it's the only one available with a high CRI LED that actually looks good, and it's one of the only models using a reflector. Klarus has an entire lineup of Mi1C lights - all except the HCRI one being reviewed here use an XP-L Hi in place of the 219C. There's a copper and a titanium model, as well as the 'base' model that uses an aspheric lens in place of the reflector.

This is a great little light and, if it's the form factor you're after, it really deserves consideration. The magnet is fantastic, the beam is gorgeous, and it pumps out a ton of light for the size. I'm also always a fan of stainless steel bezels - this really checks a lot off my 'nice to have' list. I don't like that you have to hold the switch to turn the light off, or that there's no mechanical lockout - but neither of those are enough to be a deal breaker for me in this form factor. 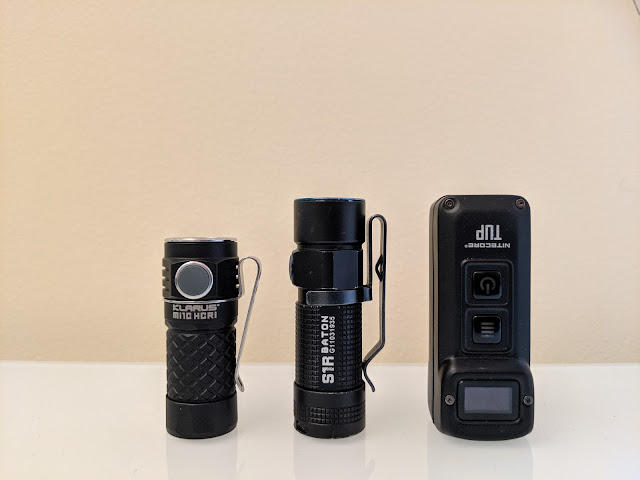 Here it is next to the Olight S1R Baton and the Nitecore TUP for size comparison. Note that the S1R is a few years old now, and Olight does have smaller models. 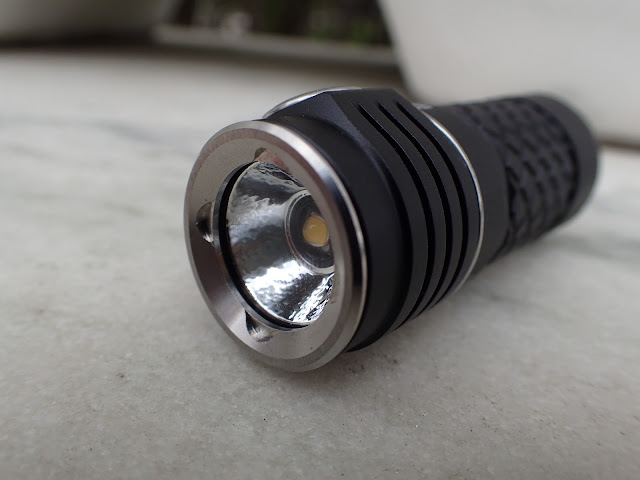 The front of the light features a stainless steel bezel - something that's always sure to gain points in my book. Behind that, we can see some shallow fins cut into the light for cooling. 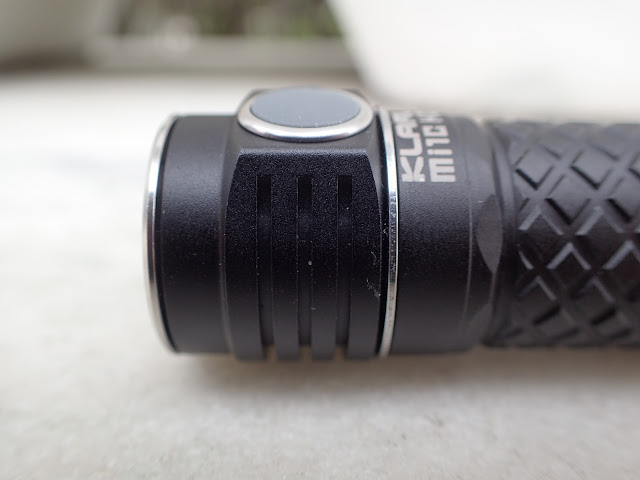 The switch protrudes slightly, and has the brand and model etched into the anodizing at the top of the body tube. The etching is a bit rougher around the edges than I'm used to seeing on some other lights, but I really don't see that as an issue. I did notice the switch sometimes gives a false 'click' before it's pressed down far enough to activate on my sample. 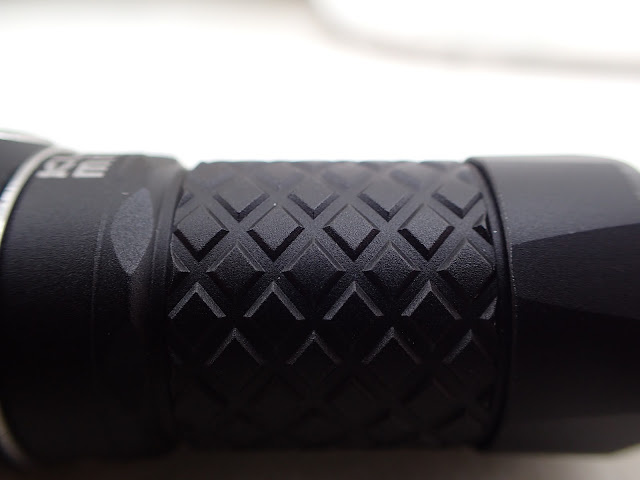 The body of the light has an excellent pineapple style 'knurling'. Very well done, and very grippy. 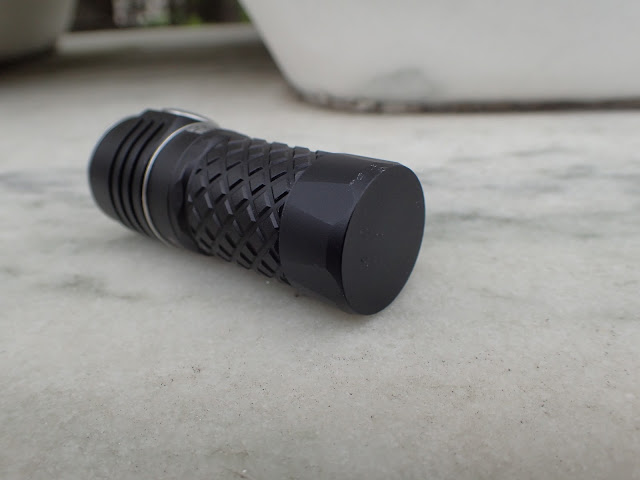 The tail is flat, and this stubby little light is very stable when tail standing. 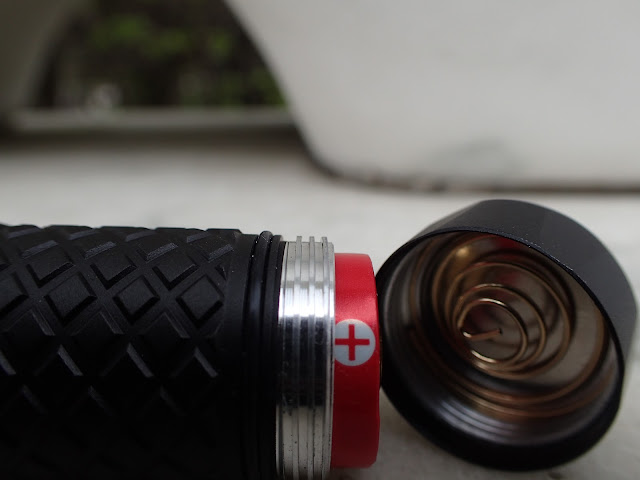 Inside the tail we can see the square cut threads are not anodized, which means you can't loosen the tailcap to physically lockout the light. The cell is inserted 'backwards' from the standard orientation, with the negative terminal towards the tail. There's a thin spring that serves as the positive contact. 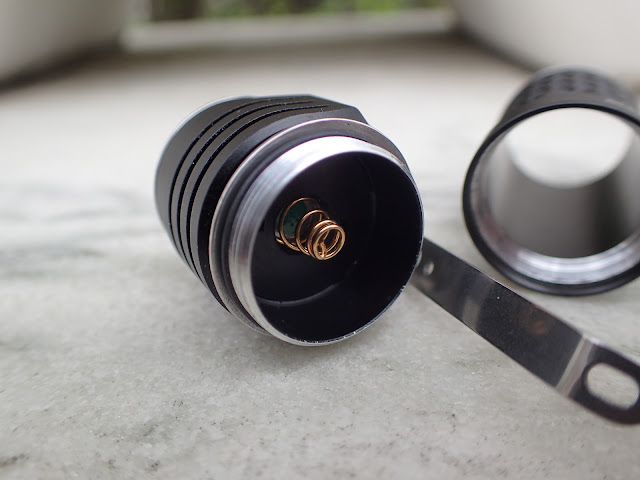 The body tube also unscrews from the head, where a second spring serves as the negative contact. Again, the threads are unanodized. Surprisingly, the retaining ring holding the driver in place is made of plastic, instead of the usual brass or aluminum. I worry a bit about the durability of such a small threaded plastic part, but I like that it covers the components on the driver. That could help prevent accidental shorts if something metal makes it's way into the tube during cell changes. 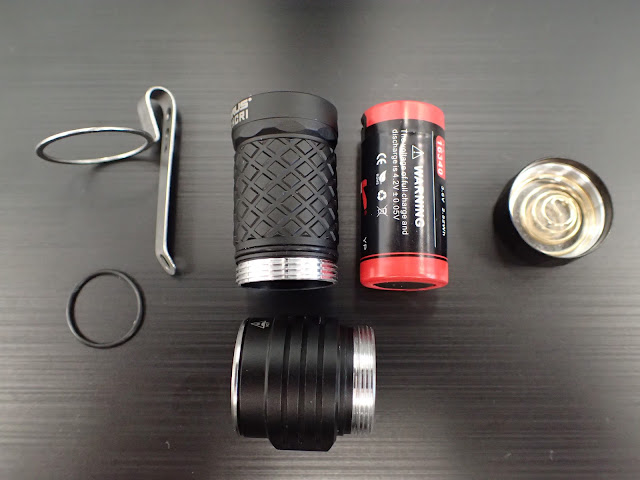 It's nice that the cell tube unscrews easily from both ends, making it easy to get into the light. This makes it easier to remove parts, and prevents any issues from stuck cells. 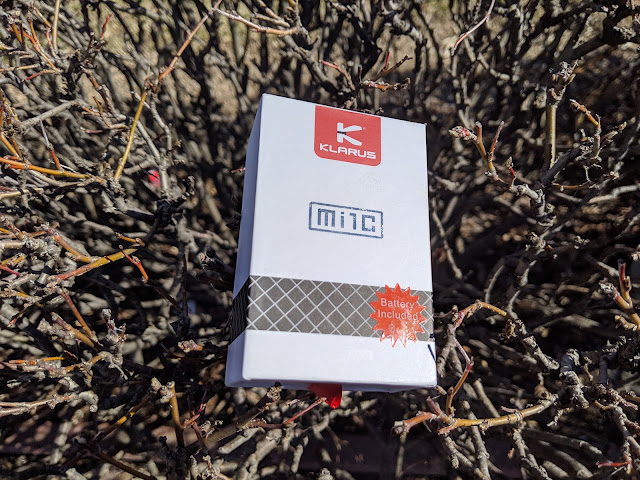 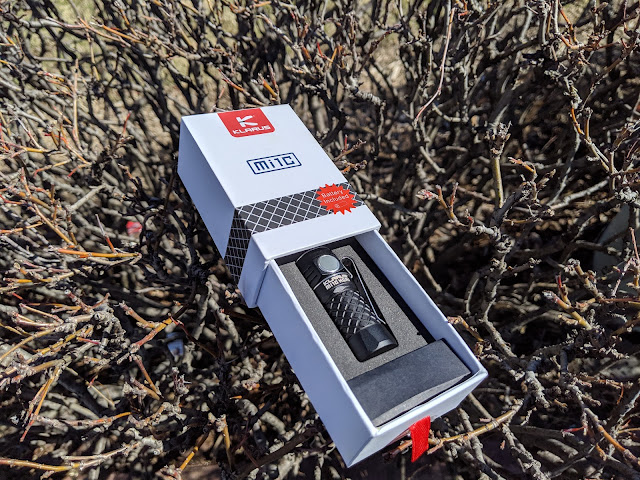 The light comes in a white box that slides to reveal the contents. It's a pretty fancy box, and even has the name of the light foil printed on, but it doesn't seem to have any indication of which version is inside. In it you get:

The ergonomics of this light are as good as they can be, but I never enjoy holding these tiny things for too long - even though an 18650 is often overkill, I often lean towards that form factor if I know I'm going on a hike and I'll be holding on to a light for more than 10 minutes. That being said, the point of this light is that it's small enough to live in your pocket without taking too much space, which it does very well. 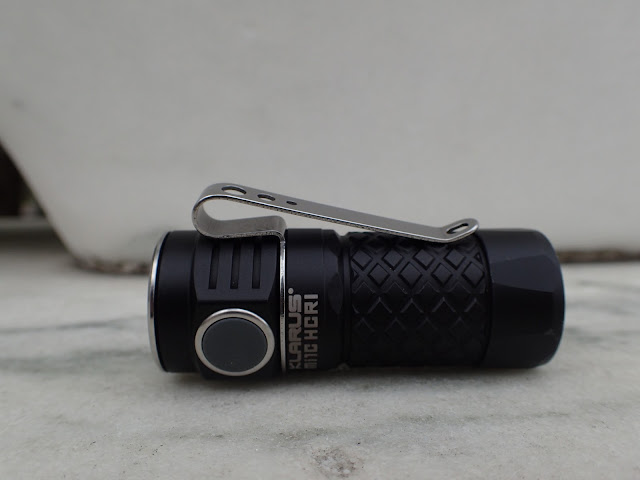 The pocket clip is attached with a collar at the head of the cell tube, and carries the light relatively deep with the head up. This orientation also means that, when clipped to the brim of a hat, this will work as a headlamp. The clip can be removed and the light will work just fine without it as well. 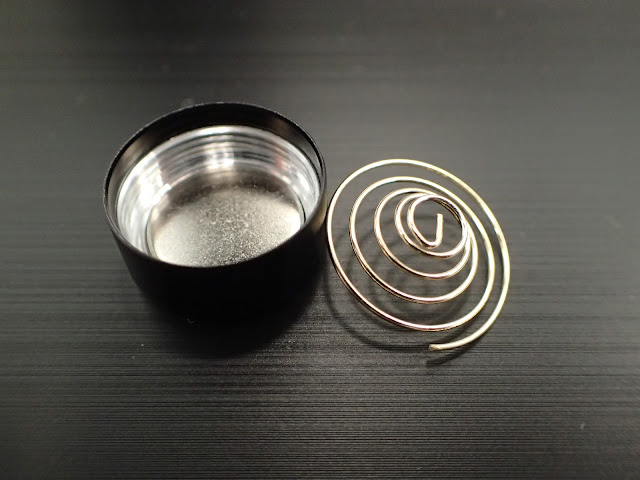 The magnet at the tailcap is easily strong enough to hold the light in any orientation, which is fantastic. I love magnetic lights, but if you don't, there's no easy way to remove it. I was able to access the magnet by removing the spring from the tail, but it doesn't move and appears to be glued in place. The magnet is also strong enough that it will pull the cell out as you remove the tailcap.
There is no dedicated lanyard attachment point on the light, but you could use the holes in the clip if you really wanted to. 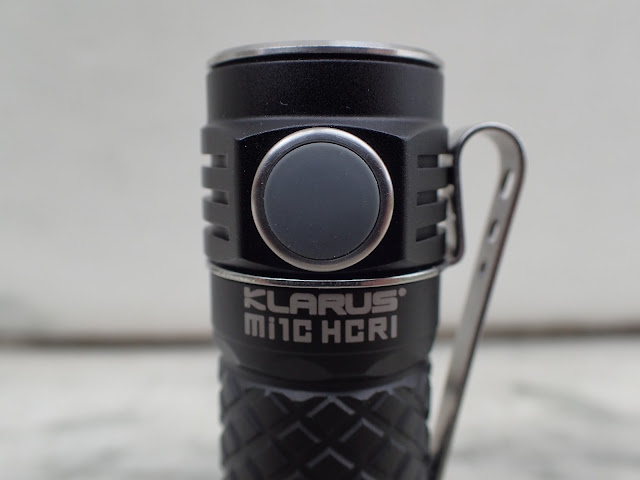 There are 4 output levels which Klarus claims at 1.8, 8.5, 39, and 395 lumens. The jump from medium to high is a bit extreme, but overall the mode spacing is good. The UI is as follows:


In addition to the basic operation:
The addition of battery check is incredibly convenient, especially for lights with a smaller cell like this one. I'm not sure why so many companies include an SOS mode instead of a beacon mode - beacon would be great for cycling, but using SOS feels like I'm breaking the rules.
As for the main UI, being forced to hold the switch to turn the light off is annoying, but otherwise I have no complaints. It's simple and easy to get used to, as it should be. 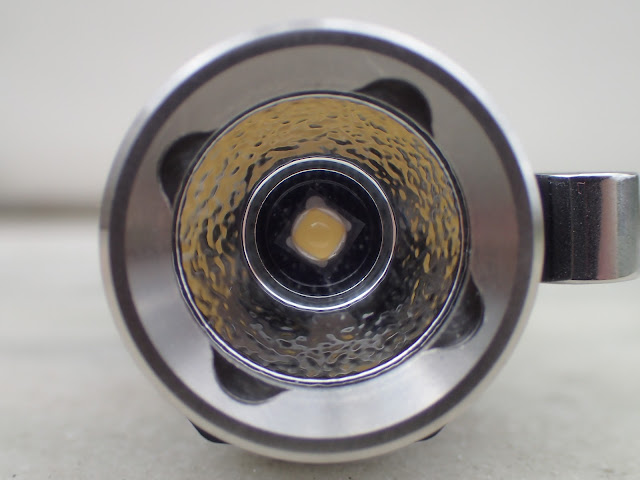 This light uses a neutral white Nichia 219C in a shallow reflector with an orange peel texture. It's one of my favourite LEDs, and I love the beam it makes in this little light. No complaints, and not a thing I wish I could change.

The light runs on a standard 16340, and includes one with a USB port built in for charging. It can also be powered by disposable 16340 cells.

Runtime was tested on both high and medium with the included cell. Runtime on high was slightly lower than advertised, but runtime on medium ended up being a bit longer. The runtime on medium was perfectly flat for the entire test, which is fantastic. It's also worth noting that runtimes for the high CRI model tested here are a bit higher than the other models.

The same test zoomed in on the high run shows how drastic the initial step down is. After 45 seconds, the light is already down to 50% of the output just 15 seconds earlier. After a bit of bouncing back and forth while the temperature settles, it holds steady for the rest of the run. The thermal sensor seems quite conservative and the light stays relatively cool for the entire test.

To charge the included cell, remove it from the light and plug it into just about any USB power source with the included micro-USB cable.

I measured charging twice, and both are pretty perfect and consistent. Constant current at a little over 0.3 A, a safe level for this cell, before the CV phase. The LED at the top of the cell changes from red to blue exactly when the charge completes, and there's no notable trickle.

Teardown may be a bit of an exaggeration, but the next few pictures involve taking parts of the light off that require tools to remove - that means they could void your warranty, and I don't recommend them. I've included this because it may be helpful for others. 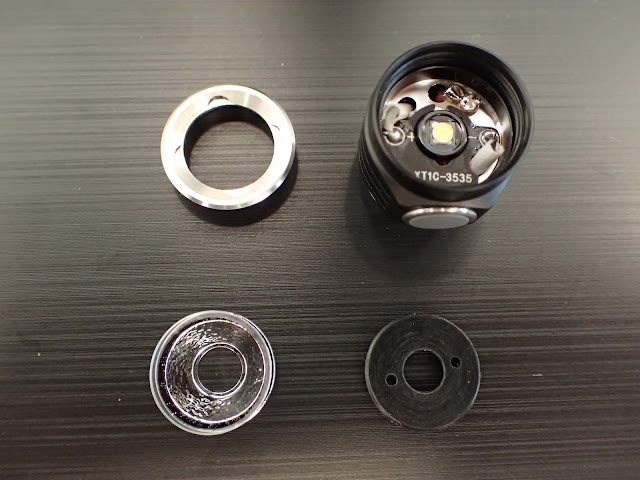 Continuing the trend of glue free construction, the stainless steel bezel and plastic retaining ring are easy to unscrew with a pair of snap ring pliers. 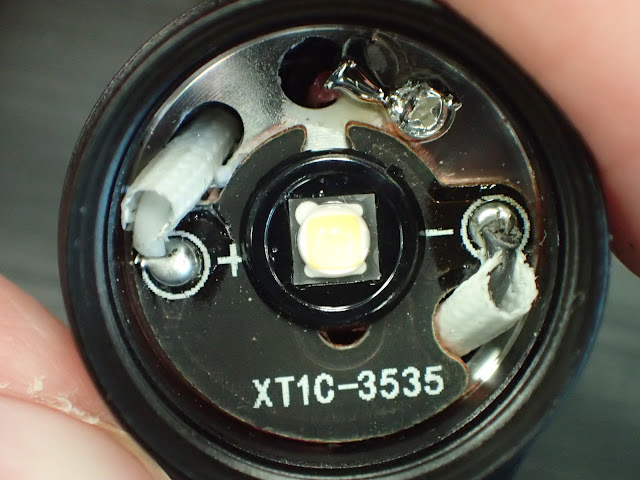 On the top side, we can see an MPCB with a bit of a non-standard shape. There's a third wire running to the shelf, which I can guess may be for the thermal sensor. Not sure. 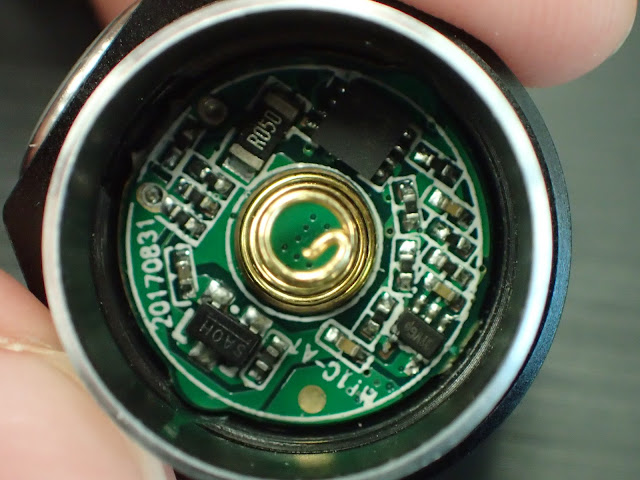 The opposite side gives us a peek at the driver.

This product was provided free of charge from Best Light. I was not paid to write this review, and have tried to be as unbiased as possible.
Klarus Mi1C HCRI product page at Best Light
Zeroair has reviewed both the standard and titanium versions of this light, both of which use an XP-L Hi in place of the 219C
1x16340 Flashlight High CRI Integrated charging Micro USB Nichia 219C