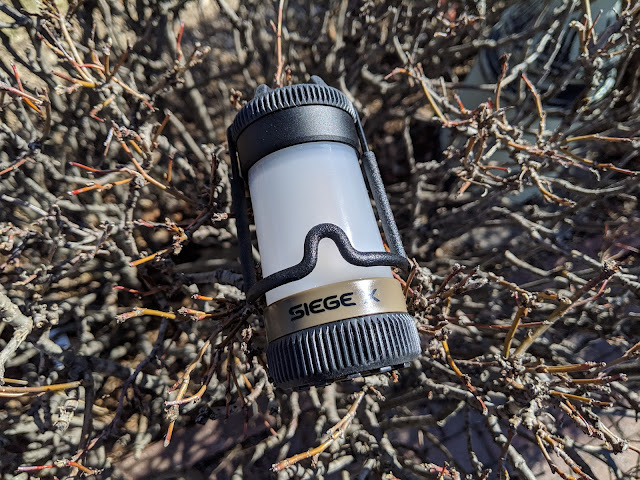 Today I have Streamlight's newest lantern, the Siege X USB. This is a compact lantern powered by a single 18650 or two CR123A cells. In additional to the standard white mode, it also works as a red lantern, and has a flashlight built in to the top.

There's a lot to like about this lantern - it's very compact and well built, there are a ton of ways to keep it where you want it, and the interface is easy to use and uncomplicated. It's also great that you can run it on CR123A cells in a pinch, and I'm sure plenty of people will love the red light mode.
For me, the visible PWM is too much of a downside to continue using this product, but I know some people are less sensitive to that than others. 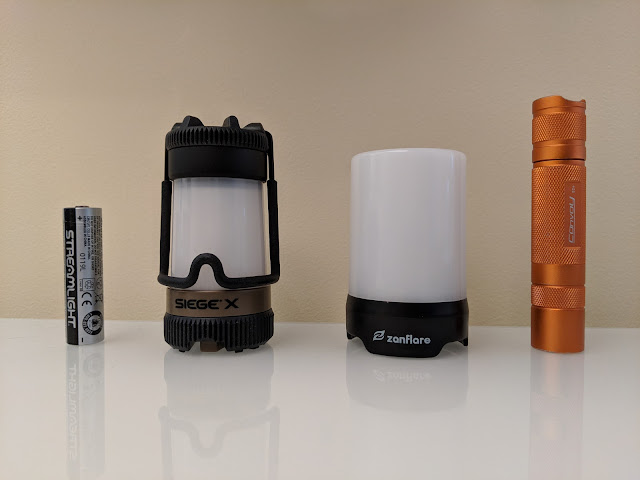 Here it is next to the included cell, Zanflare T1, and Convoy S2+ for size comparison. Overall, it's a very compact lantern, and should fit well in a backpack. 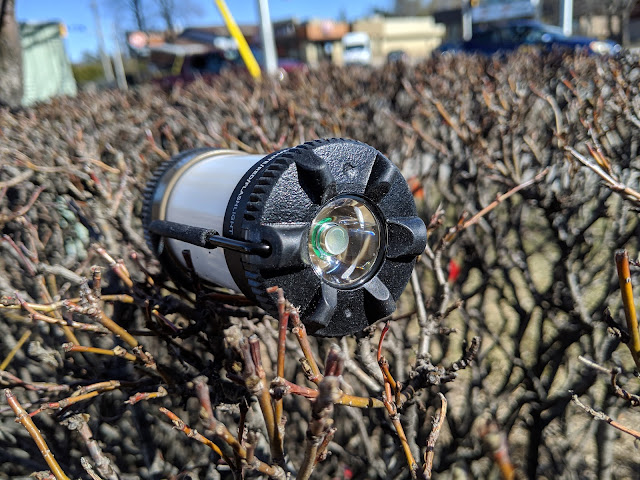 The top of the lantern is the overmolded with a soft rubber, which should provide great protection from impacts. We can also see the TIR lens for the flashlight on this end. The bail of the lantern is attached directly into two of the lugs. 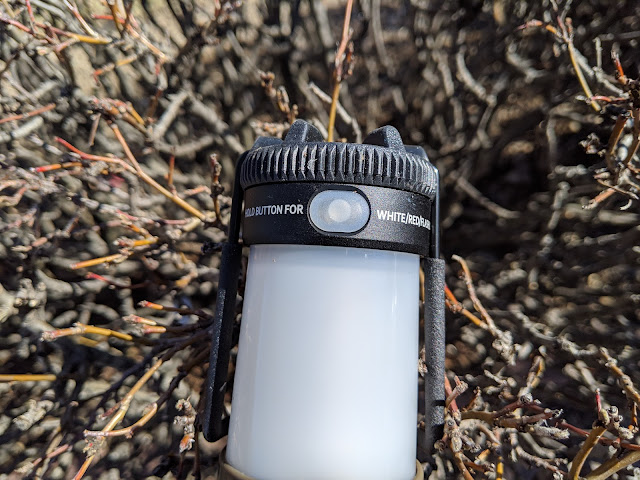 The black part of the lantern below the rubber is actually made of aluminum, likely to help with heat sinking. The large switch has both red and green indicating LEDs hidden beneath it. 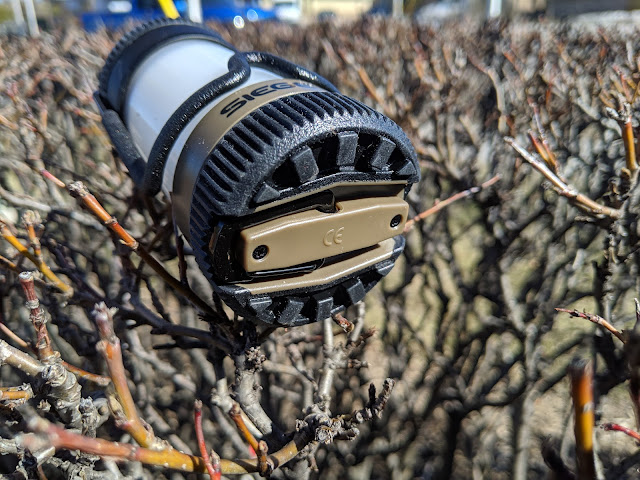 The base of the lantern is made of a tan colored polycarbonate, again overmolded with soft rubber. This makes it very easy to grip, and shouldn't have any issues absorbing small impacts. 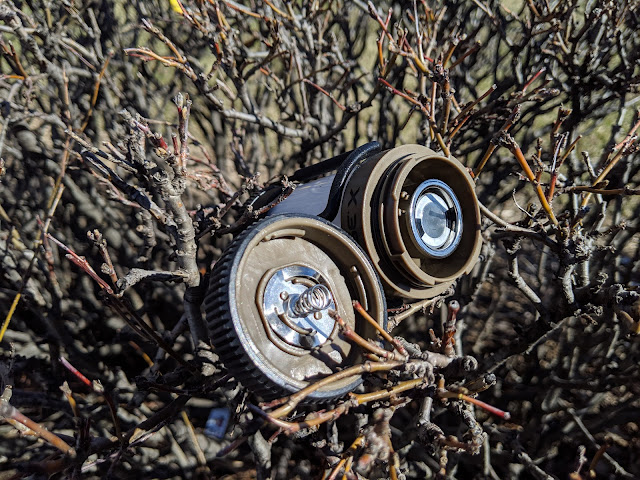 The base of the lantern unscrews to change cells with a quarter turn. There's a long spring that serves as the negative contact. The contacts used here do mean that mechanical lockout to prevent accidental activation isn't possible.
At the opposite end of the cell tube, the positive contact is a recessed brass button. 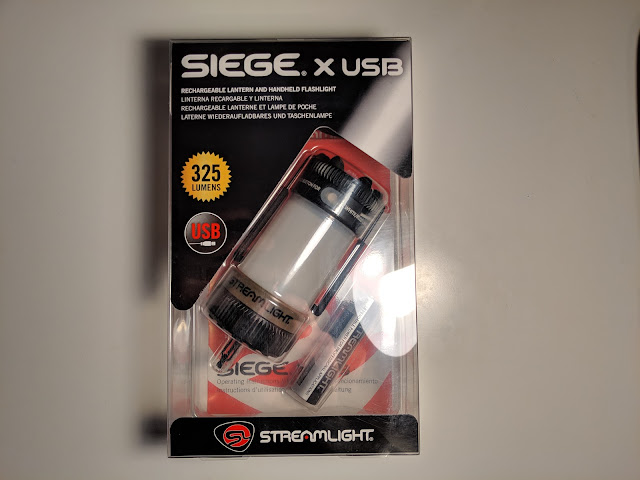 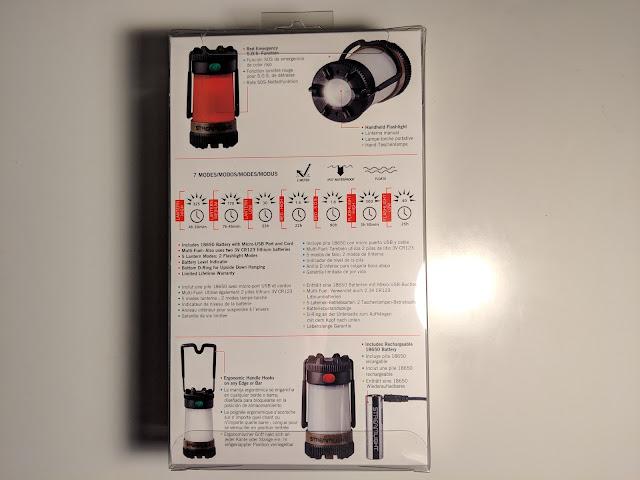 The light comes in a very retail-ready package, which includes:

The rubber sections at either end of the lantern are extremely grippy, which give this light decent enough ergonomics when used as a flashlight - but this is clearly intended to be used hands free as a lantern. 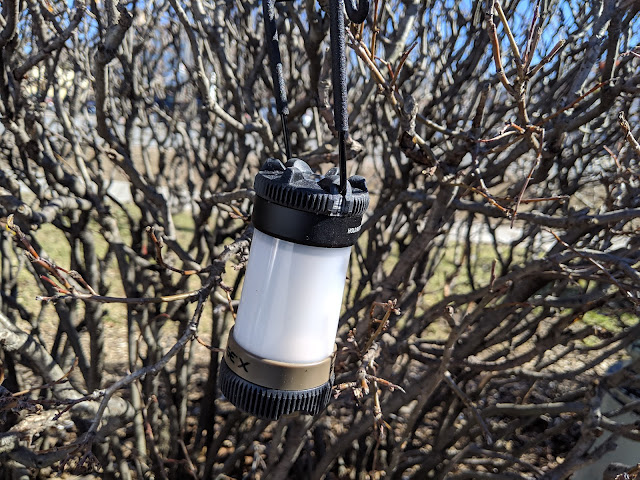 Both the base and the top are stable and grippy, so the light will stay wherever you left it. If you prefer to hang the light up, the bail design is ingenious. Not only can you hang it off a rope or a nail, but the small detent in the center lets you hook it off of any fixed rail as well. 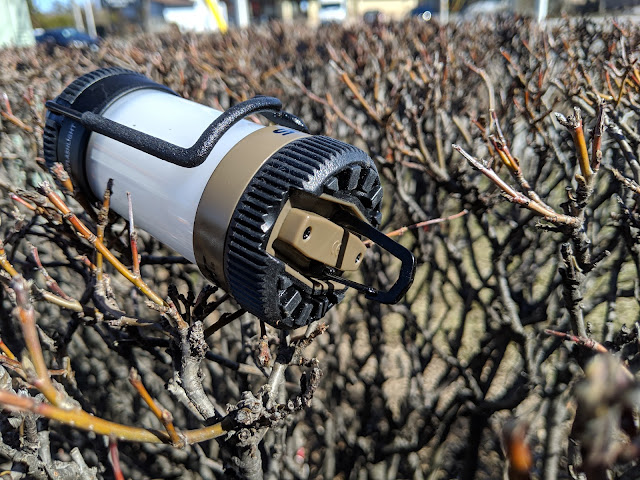 There's a second caribiner-style clip folded into the base of the light. This will only work for hanging off of thin cordage or other smaller material, but it could come in handy for hanging off of the top of a tent.
It could be nice to see a model with an added magnet in the base, but I don't have any issue with Streamlight leaving that out - there's a pretty small overlap between the places I use lanterns and the places I'm likely to be near magnetic surfaces.

The interface on this light is nice and simple.


Very easy to get the hang of, and very intuitive. The instructions to cycle the different modes are even written right on the lantern. The modes are listed as 30, 170, and 325 for the lantern, 1.6 lumens for the red mode, and 40 and 300 lumens for the flashlight at the top. The flashlight can not be used at the same time as the lantern.
Some people may want an even lower white mode, but I find the 30 lumen mode plenty dim already. The lantern also has a red beacon mode, which claims a 90 hour runtime. There's no electrical or mechanical way to lockout the light, so you may want to carry a spare cell or store the cell outside the light if it's getting bumped around a lot - but the button is flush enough that this isn't likely to be a major issue.

The lantern puts out a very even spread of light, but the light quality is the biggest issue with the Siege. First, the light is cool white - I prefer a warmer CCT for a lantern, especially if I'm stuck using it for an extended power outage or a camping trip. In both of those situations, a cozy warm beam is more pleasant than an industrial cool white, in my opinion. 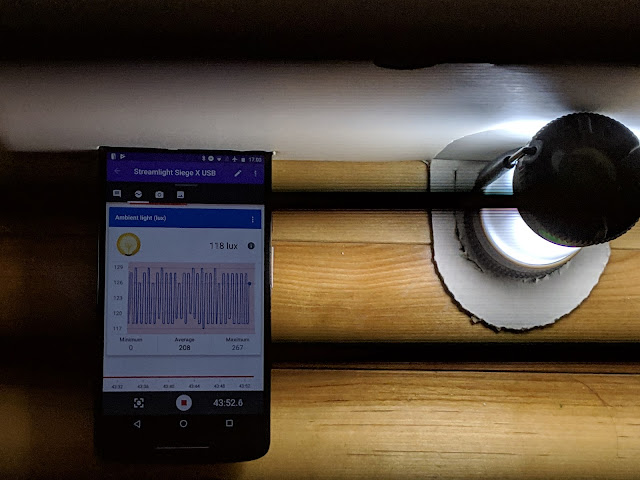 What doesn't come down to opinion is the PWM the lantern uses. For those that aren't familiar, PWM is one way that the electronics in a light can control the power going to the LED - it flashes on and off quickly. If done well, this happens so fast the eye can't see it, and it can only be detected with a camera (that's what the black bars in the image above are caused by). On this lantern, I can notice it with my eye on all modes, and it was even picked up by the runtime test.
Thankfully, I didn't notice any PWM in the flashlight beam - and I was surprised by how tight the beam was. Perhaps I shouldn't have been surprised - the Protac 90 also had a relatively tight beam, so it seems Streamlight just has some very good optics. I find this beam profile to be a great addition to the very local spread that the lantern puts out. 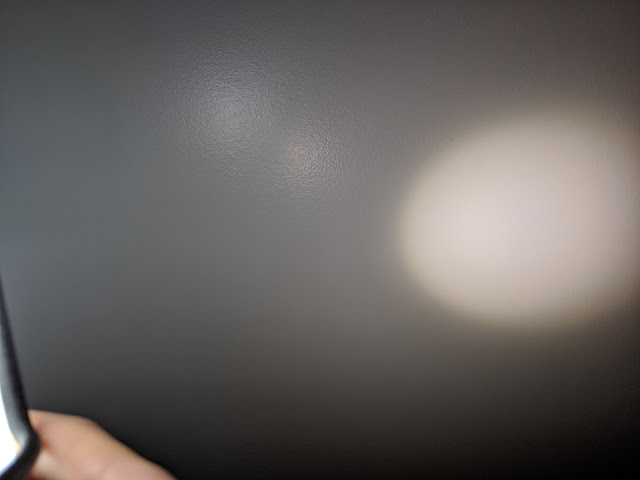 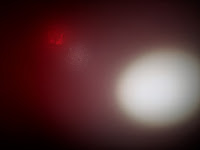 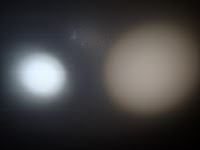 Comparing the color of the beam to a 4500K E21A in a Jetbeam Jet-u, we can see that both the lantern and the flashlight are much cooler. The image above shows some PWM banding from the flashlight as well, but I didn't notice this with my eye.

The high mode seems to drop fairly quickly down to 50%, and tracks downwards with voltage for the remainder of the test. The runtime was 288 minutes, slightly exceeding the manufacturer's claim. The medium test again shows the light slowly fading as the cell drains, this time lasting almost 8.5 hours - which easily lasts beyond the published specs. As the cell drains, the indicating LED glows orange and then red to alert you.

The flashlight mode was tested on high, and shows much better regulation. Here the output is held steadily for almost the entire run, and the runtime goes for 216 minutes, which almost exactly meets what Streamlight claims.
I think CR123A support is excellent in a lantern that could end up being used in emergencies where you aren't able to recharge. I do wish that Streamlight would include a higher capacity cell, or offer one as an aftermarket purchase - they're a brand with mainstream customers who won't all be familiar with 18650 cells, and the 2600 mAh one they include has 30% less capacity than some of the high capacity cells available today. If you do want to use another cell, the lantern has low voltage protection, and will turn off below 2.7 V. The recessed positive contact means only button top cells will work.
Standby drain was measured at 11 μA, which is minimal. The cell shouldn't drain at any noticeable rate if it's left in the light.

The included cell has a micro-USB port in the side - just plug it into a USB power source to top it off. This sort of charging is convenient and easy to use, but not exactly my favorite - mainly just because it encourages the user to have a bare 18650 cell lying around while it's plugged in. Since the included cell is protected, it really isn't much of a concern, but I still don't love it.

While it's charging, a red indicating LED at the positive terminal lights up. When charging is complete, a green one lights up. I tested the cell two times and, while there was a bit of odd variation in the current draw at the beginning of the tests, the overall charge curve is rock solid. The charge current is right around 0.55 amps, which is a bit slow, but safe for these cells. Overall time to charge was around 5.5 hours, and the average capacity into each cell was 2661 mAh.

This product was provided free of charge by the manufacturer. I was not paid to write this review, and have tried to be as unbiased as possible.
Manufacturer's product page
Amazon listing (affiliate link)
1x18650 2xCR123A Flashlight Integrated charging Lantern Red light Streamlight