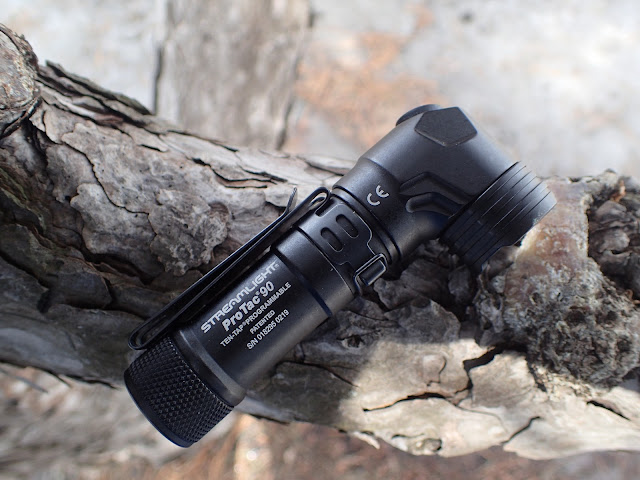 Streamlight is a very popular name in the flashlight world, and in the EDC community - so when they announced their new ProTac 90, I had to get one in for testing. This is a right angle EDC light, with a two-way clip design to give you a ton of carry and mounting options. It uses a forward-clicky switch, which is pretty unique for this factor. Also unique is it's ability to take either a single AA or CR123A cell as a power source. That combo should make it possible to find a battery just about anywhere.

As expected, I like the form factor of this light a lot. The momentary switch makes it very convenient for use as a work light as well, and the beam is great.
I find the way the head protrudes to make it a bit less pocket friendly than some other right angle lights.  The mode spacing could be improved as well, but overall this light has a lot going for it.

The light measures 96.4 mm long, 38.6 mm at the head, and 19.3 mm in the body. The larger head measurement is due to the way the head periscopes off the side of the light. The weight, not including a cell, is 62 grams. 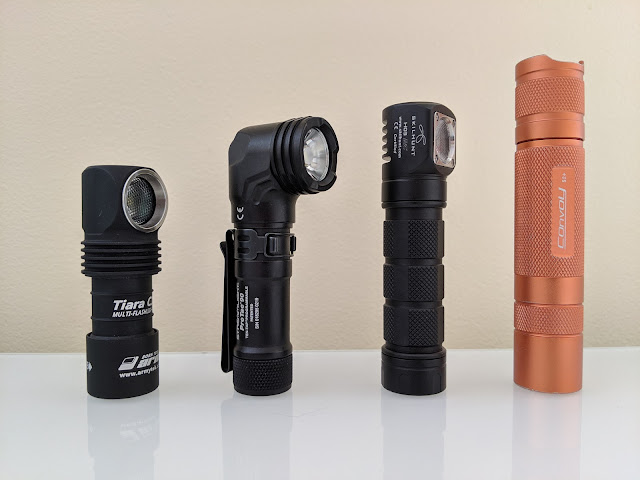 For size comparison, here's the ProTac 90 next to the Armytek Tiara C1, Skilhunt H03 RC, and Convoy S2+.

This light is constructed from aluminum with a black anodized finish. The finish is unique - it's matte but smooth, and has a bit of depth to it that is difficult to capture in images. It reminds me a bit of the look that glass-filled nylon has (common in knife scales). 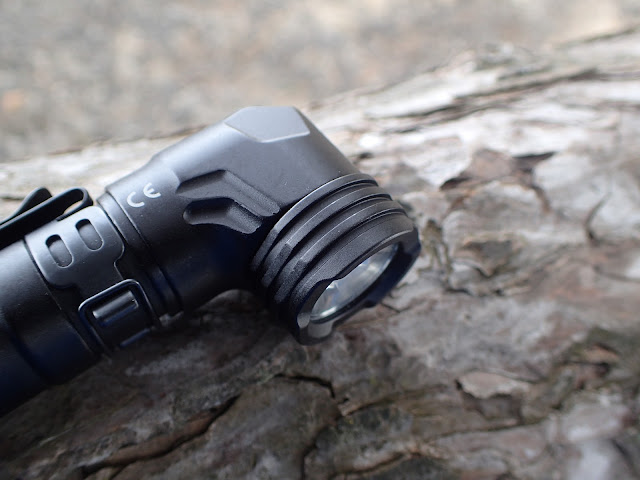 The head of this light houses a TIR behind a bezel with some small crenelations. There are some fins around the bezel for cooling. The entirety of the bezel protrudes from the side of the light. 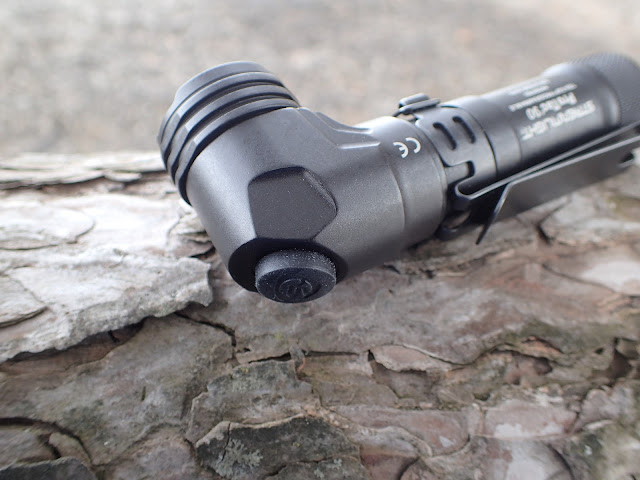 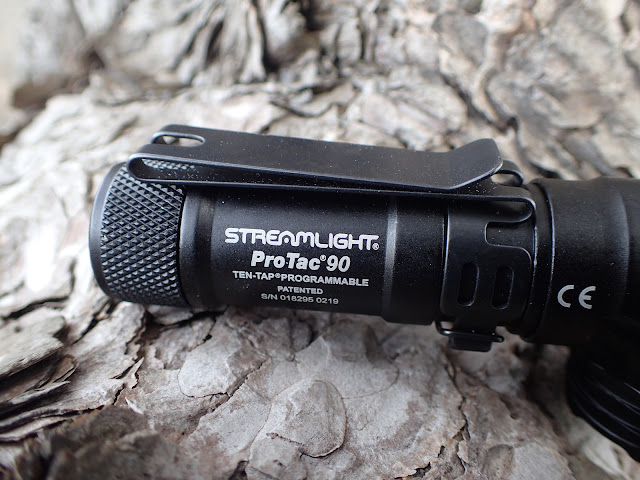 The body of the light is smooth, and slightly narrower than the tail. I've said it before, but I find that lights with a bit of a 'waist' like this really have great grip. Etched into the anodizing is the brand, product name, serial number, and regulatory info. 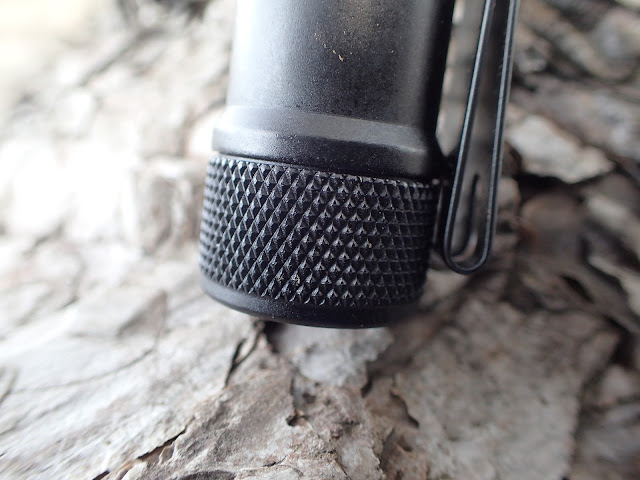 The tailcap has some rather aggressively grippy knurling, so you shouldn't have any issues replacing cells. The base is flat, so the light can tailstand for hands free use. 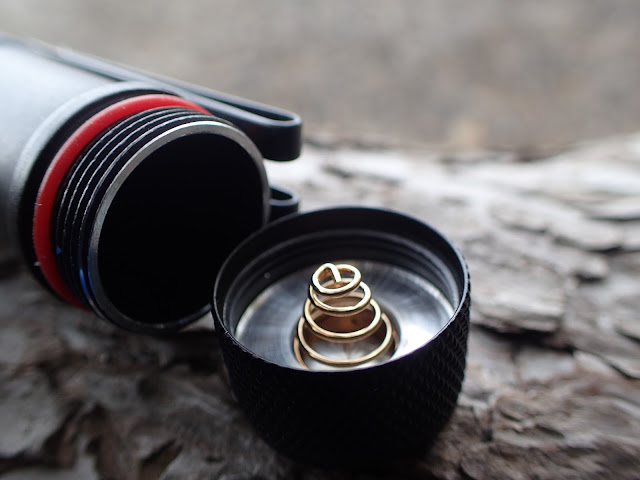 Anodized threads in the tailcap mean the light can be locked out with a slight turn in order to prevent accidental activation. A gold colored spring serves as the negative cell contact. 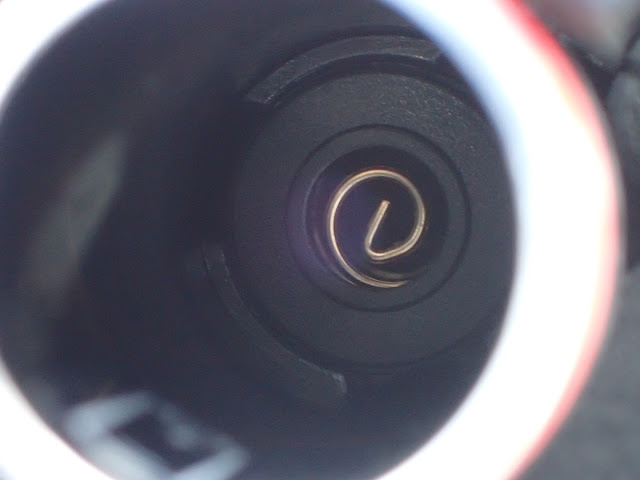 I wasn't able to unscrew the head from the body by hand, but peering in to the cell tube you can see the interesting mechanism that lets this light handle both cell types so well. There's a small shelf around the outer edge of the tube that catches the end of wider CR123A cells. Narrower AA cells center in and rest on the inner portion, which is spring loaded and depresses. 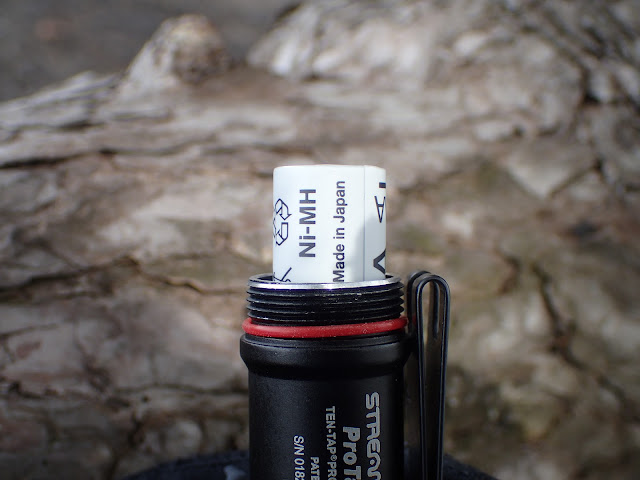 Before it is depressed, a good chunk of the AA cell is left protruding from the light, so you won't make the mistake of trying to put the tailcap on without lining things up first. Thanks to this mechanism, there's almost no rattle to the light with either cell size. 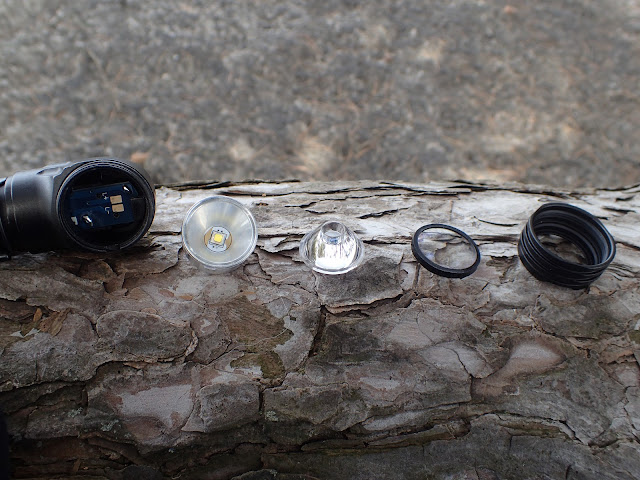 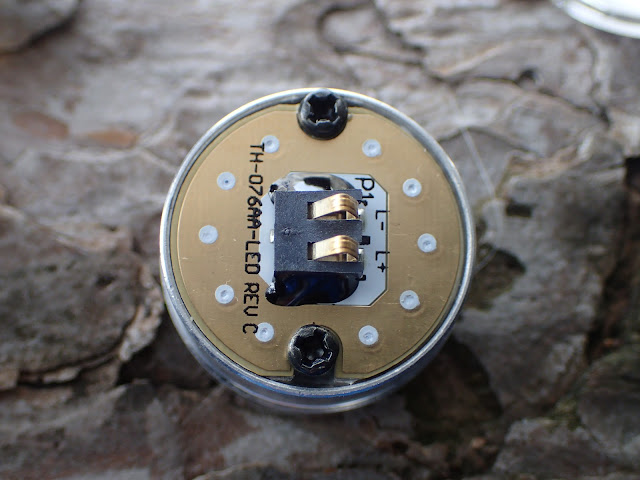 I was able to remove the front bezel of the light by hand with minimal force. I'm not sure if Streamlight intends for this to be user removable, so I wouldn't suggest doing this to your own light unless you don't plan on using the warranty.
Inside the head, there's a glass to protect the TIR, selaed with an O-ring. The TIR sits in a pill-type structure that houses the LED. 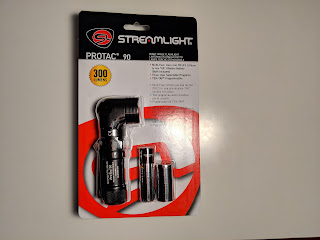 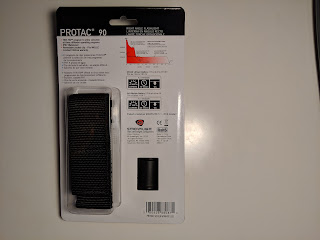 The sample I received came in a retail-ready clamshell package, that I was happy to see included a runtime graph on the back. 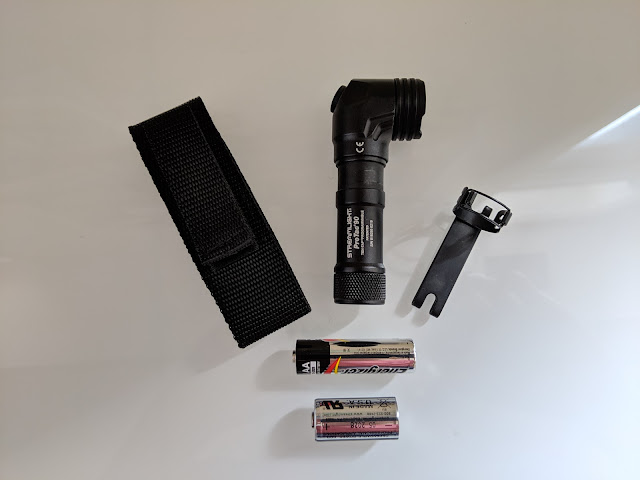 Inside, the kit includes:

Unlike most right angle lights, the switch on the ProTac 90 is mounted at an angle. This makes it easier to access and easier to press. It also serves as a reference point that helps keep the light pointed forwards when it's in use, especially while wearing gloves. 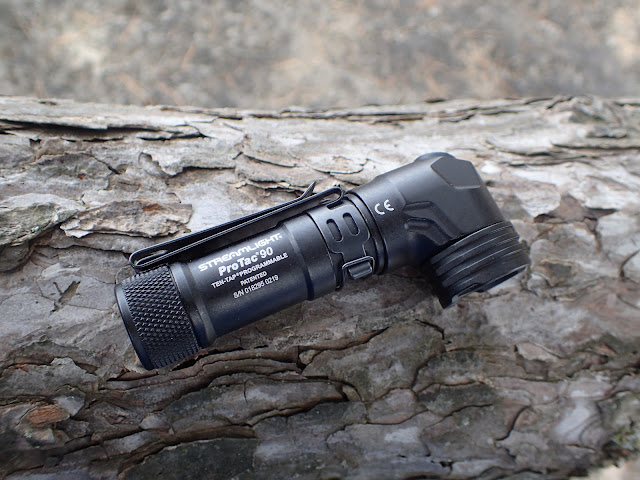 The light ships with a two way pocket clip installed. The profile means it can be carried fairly deep in a head-down orientation, though I found myself using this for hands-free purposes more often. The two-way design gives lots of options for clipping to a backpack strap, chest pocket, or belt. 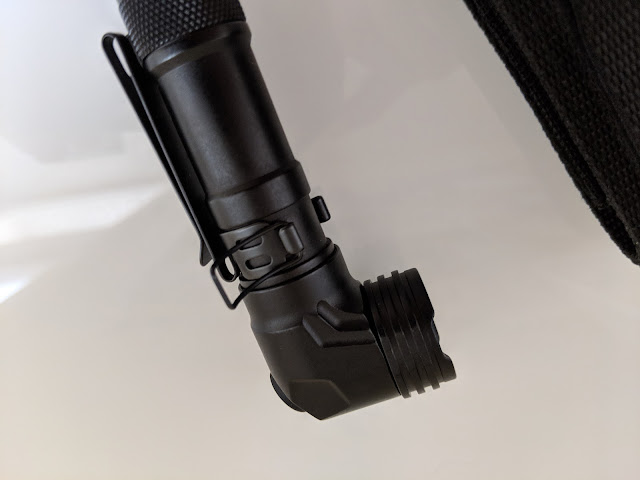 An interesting clamp design holds the clip in place. It's still possible to spin the clip around the light with a bit of force, but this design gives me a lot more confidence that the clip won't fall off at the wrong time. 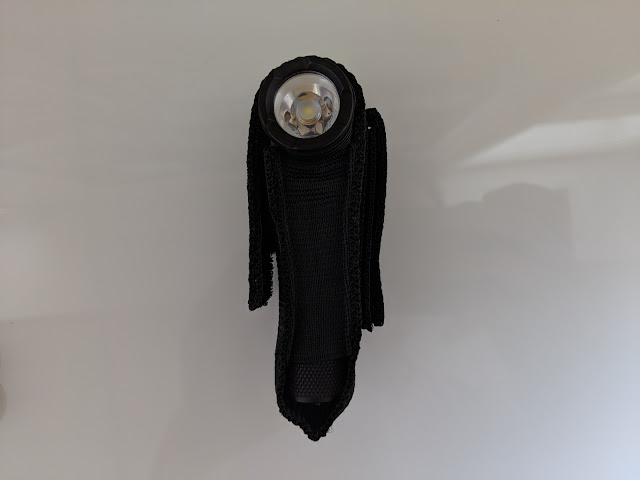 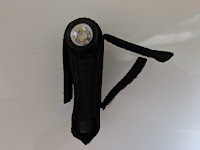 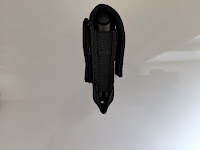 Finally, a small holster is included with the light. It's made of nylon with elastic sides. The top seals down with hook and loop, and the belt/molle loop on the rear as well. The design lends itself to leaving the head of the light sticking out, which is handy, but it makes the holster seem as though it was made too long.
Ont method of retention I would have liked to see that was not included here is a magnet in the tailcap, so the light could be stuck to a surface near whatever you were working on.

The light uses Streamlight's "Ten-Tap" programmable UI, and is controlled by a single forward clicky switch. By default the UI is:


In any mode, the "push" can be a half press for momentary activation that turns off when you release the switch, or a full press that leaves the light on until you switch it off.
To program the alternate modes, tap 9 times followed by a hold in rapid succession. The other two modes are high only, and low-high.
Streamlight claims the output for high and low at 300 and 40 lumens on a CR123A, or 125 and 40 for an AA. I understand that many people don't have a use for lower low modes, but since the UI is programmable anyways I would love to see a fourth mode added with a much lower low. 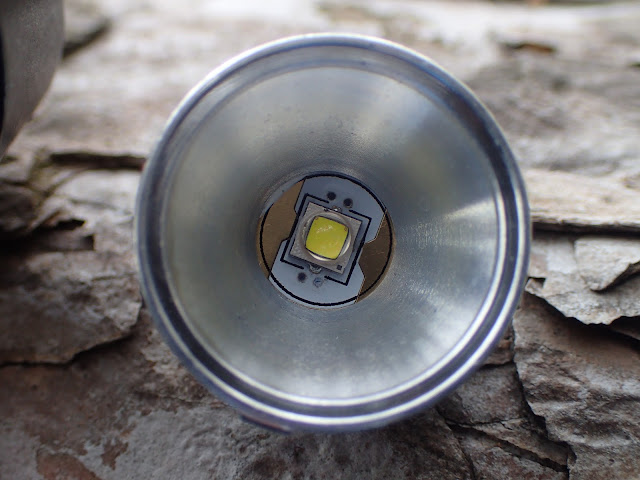 Streamlight doesn't identify the LED used in this light, only calling it a C4 LED - which is their naming convention for all modern LEDs. I'm fairly confident this is a Cree XP-G2 in this light. 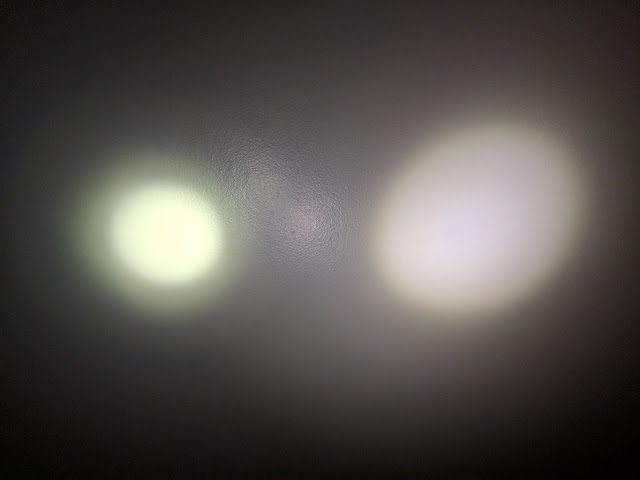 Shining the ProTac 90 next to a 4500K Nichia E21A in a JetBeam JET-μ shows that the CCT is fairly neutral, and the beam is surprisingly concentrated for a TIR light. Though the XP-G2 does have more of a green tint than the E21A, the camera exaggerates this in the image. 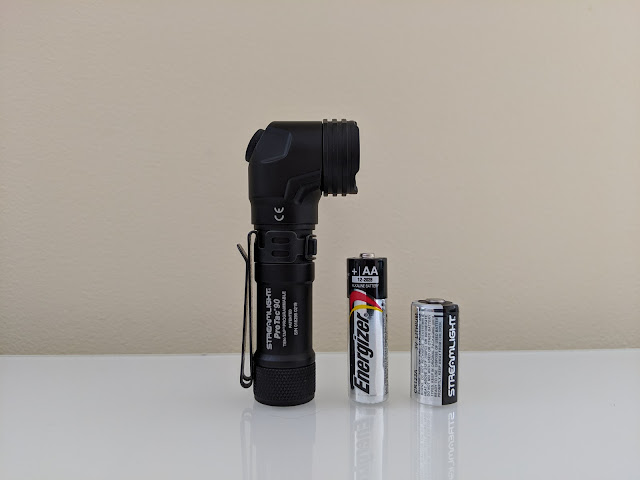 This light has the unique ability to run on either an AA cell or a CR123A cell, and the package I received includes one of each. I tested the runtime with the included CR123A, and with an Ikea Ladda NiMH AA. The light does not claim support for any higher voltage cells.

Output is much higher with the CR12A cell. There's a small part where the output is stable, but for the most part it tracks down with the cell voltage. Time to 10% was 103 minutes, which is almost exactly the claimed 1.75 hours.
Both AA tests were stable for almost the full test, and fell somewhere between the manufacturers stated runtimes for alkaline and lithium primary AA cells, as expected.

This product was provided free of charge by the manufacturer. I was not paid to write this review, and have tried to be as unbiased as possible.
Manufacturer's product page
Product listing on Amazon (affiliate link)
1xAA 1xCR123A Cree XP-G2 Flashlight Streamlight