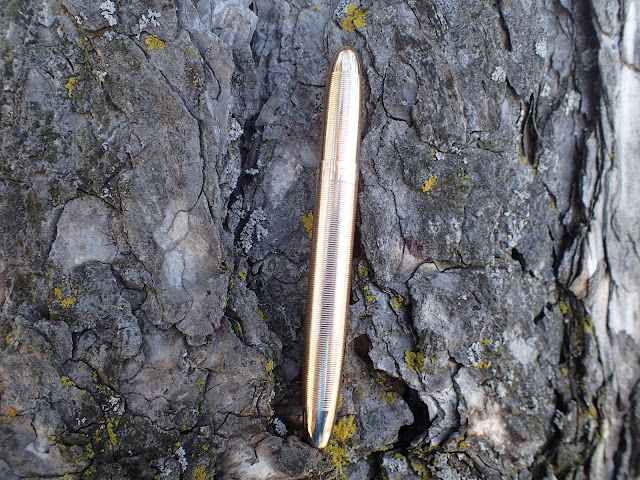 I've decided to go through some of my most used gear and share my thoughts on it - starting with this pen. For those that haven't heard of the pen, it's a small pocketable brass pen with a sleek shape. It's two claims to fame are the pressurized ink cartridge, designed to write in adverse conditions, and the cap design, which makes the pen much longer while writing than it is in a pocket or bag.
The model I own is the lacquered brass without a pocket clip, but there are literally hundreds of configurations and color combinations available. 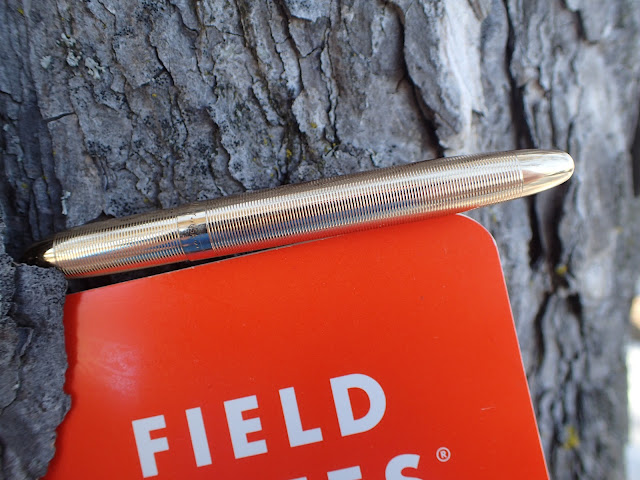 Since I've already said this is one of my most used pieces of gear, it won't come as a surprise that I like it overall. The writing experience and ergonomics aren't as great as many other pens, but the cartridge is reliable and has a large capacity for a pen this small. It's small size is also a great asset - I carry it everywhere in a jacket pocket.
It's well made, has never leaked, and it doesn't hurt that it looks good.

The pen measures 9.6 mm at the widest point, though it's narrower along the grip. Closed, the length is a diminutive 93.5 mm, and it extends to 131.5 (including the tip) in use. 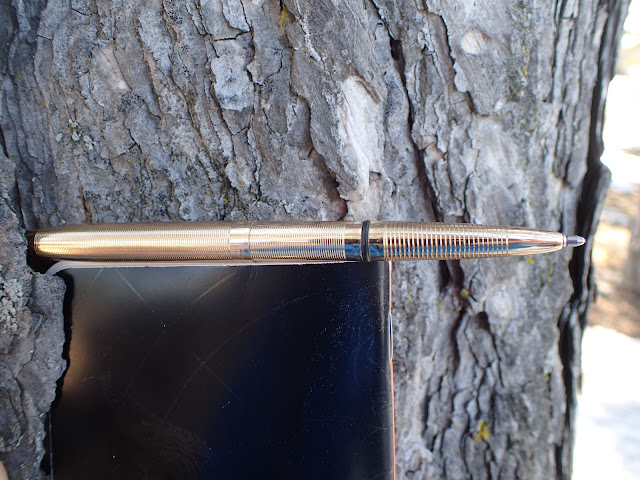 The build of this pen is nice and simple, but it works great. The material used throughout is brass, and I think that's the same material used for the other finishes. It's a great choice, as it wears well and gives the pen a good weight. 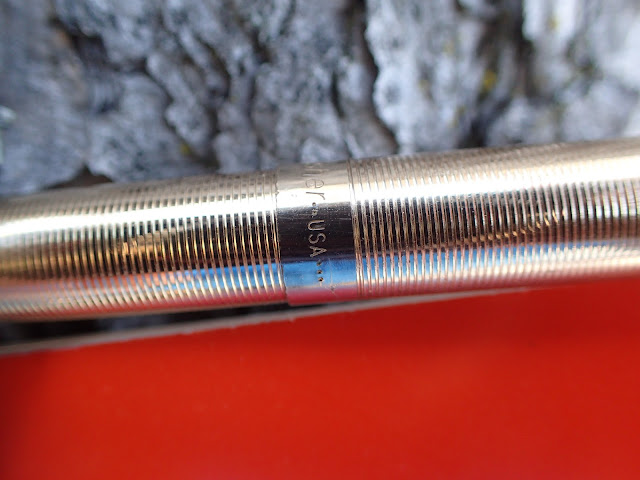 The cap is a simple spun shell, with a very thin wall. It's rigid enough that I haven't managed to accidentally bend it out of shape (yet). 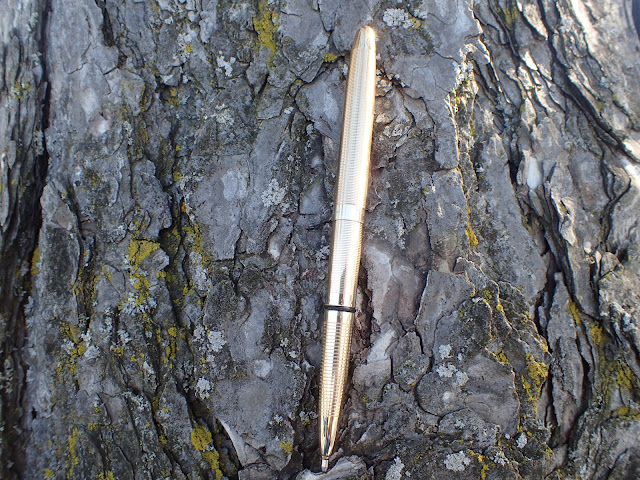 The body of the pen is made up of two pieces - the lower grip, and the shank. In between the two, there's an o-ring that keeps the cap sealed. The grip section has coarser and deeper cuts into the metal, which help stop the pen from slipping. 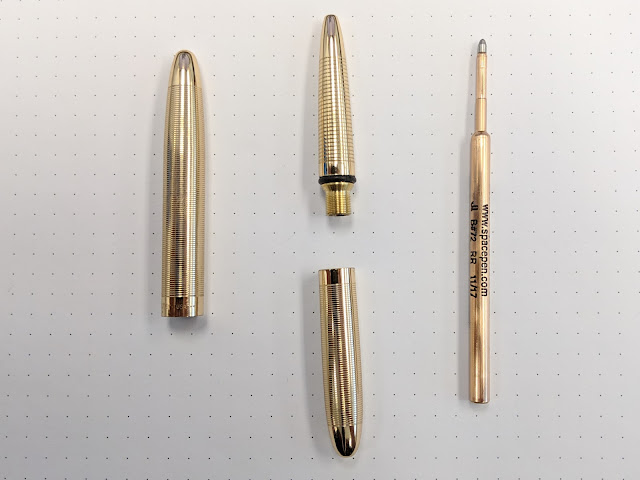 The two halves unscrew to reveal the ink cartridge. 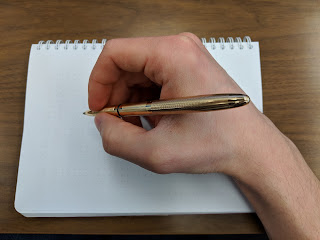 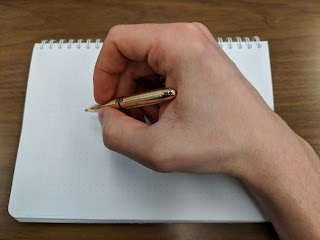 The ergonomics of this pen are the real draw. When writing, the cap sits high on the tail to give an almost full length pen. For my grip, this extra length is enough to let the end of the pen rest naturally on my hand, instead of falling into my palm. As I previously mentioned, the threading along the grip helps keep the pen where I want it. 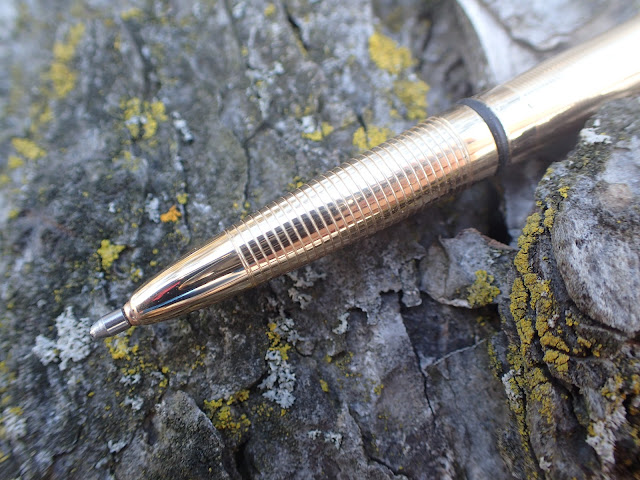 Even with these features, I think this pen is best suited as a back up or for short notes - I certainly wouldn't plan on writing an essay with it. The cap on the back of the pen adds to the length, but the weight is still about a third of the way up the body. The tapered shape also means the pen can be difficult to grip for extended sessions.
For retention, this one has nothing besides it's ability to slide easily into a pocket. There are versions available with clips, and I think that's probably the way to go - if nothing else, it would stop the pen from rolling around so much.

I'm going to recycle an image from my review of the NTP30 because it already has all the pens and inks I would use for this one. 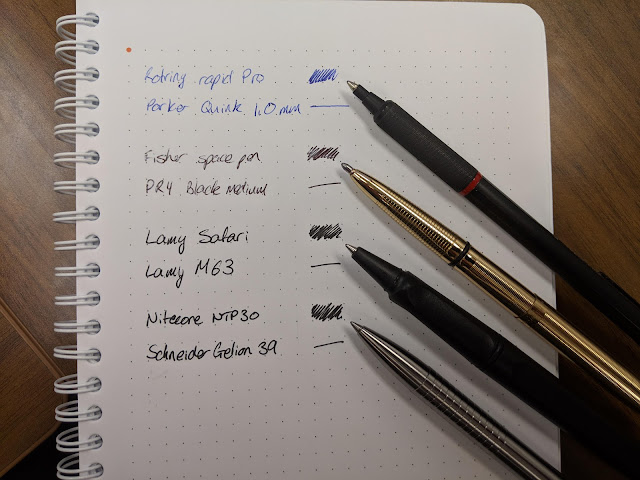 The big appeal of the Fisher PR4 cartridge used in this pen is it's ability to write under any conditions - underwater, in the cold, in the heat, on oily surfaces, you name it. I can't say I've tried all those conditions, but I can also say I've never had it fail on me. I have used the pen in extremely cold, wet, and inverted conditions without issue. The trade off here is that the writing isn't particularly smooth. Once again, this is a testament to the pen working great in any condition, but not being the best for extended writing. 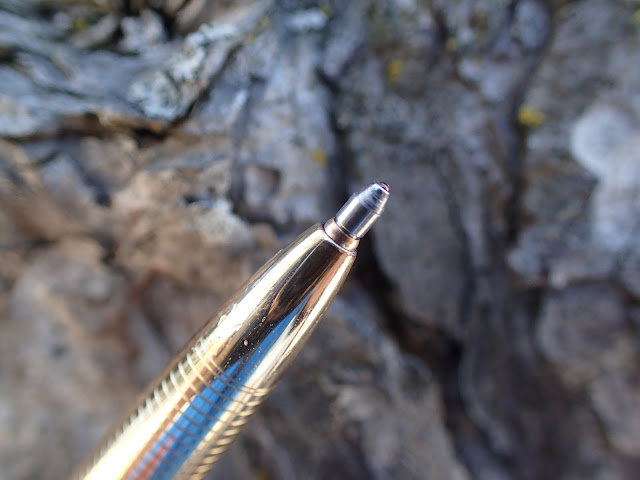 Fisher makes these refills in a variety of colors and widths, but I'm not aware of any other cartridges that will work in the space pen without some modification if you aren't a fan of the pressurized cartridges.

This product was gifted to me many moons ago. I was not paid to write this review, and have tried to be as unbiased as possible.
Manufacturer's product page
Product listing on Amazon (affiliate link)