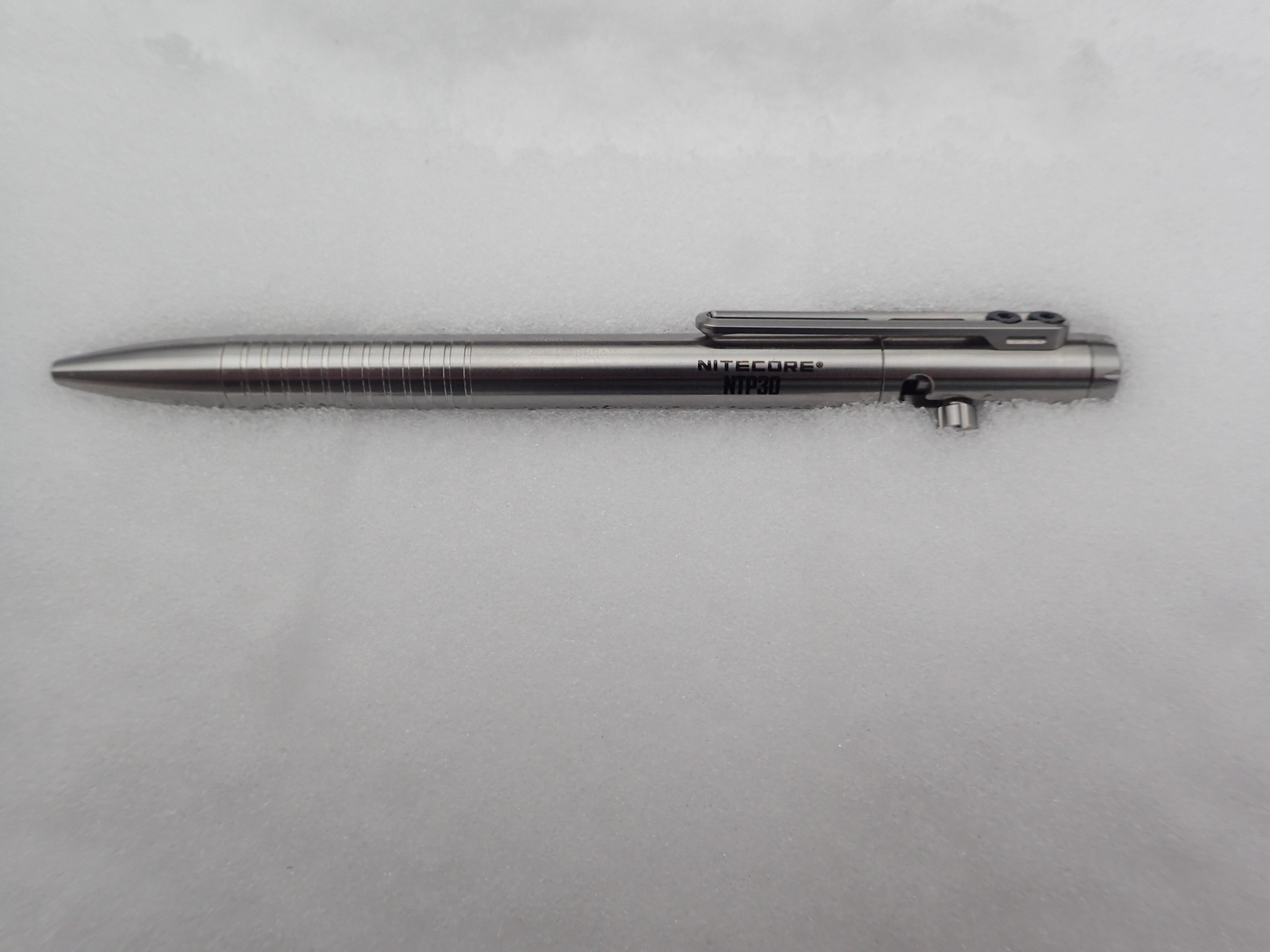 Nitecore is a big name in the flashlight market, but they’re starting to branch into some other areas as well. I have the Nitecore NTP30, their fourth pen. It’s a titanium bodied pen with a bolt action mechanism. Read on to see what I think of it! (or just scroll through to see pictures of it.)
A little bit about me as well - this is my first review here on r/pens. I’m new to the sub, but I have been in to pens for some time and I’ve built up a bit of a collection. My “daily drivers” are a Rotring rapid Pro with a Parker Quinkflow refill, and a Fisher Space pen. I frequently do reviews over on r/flashlight, including many from Nitecore. They sent me this item to review, and I did not pay for it, but as always I’ve been as impartial as possible.

I like this pen quite a bit, as I would expect to given the asking price. It’s compatible with common refills, and comes with a decent one out of the box. The mechanism is fun to fiddle with, and the build is good enough that I wouldn’t hesitate to recommend it.

The pen comes in a snazzy matte black box, with the item, product name, and brand embossed into the material and shown in metallic writing. The box slides open to reveal the pen itself, safely tucked into some foam. There’s an insert in Nitecore’s classic yellow identifying some of the pen’s features. 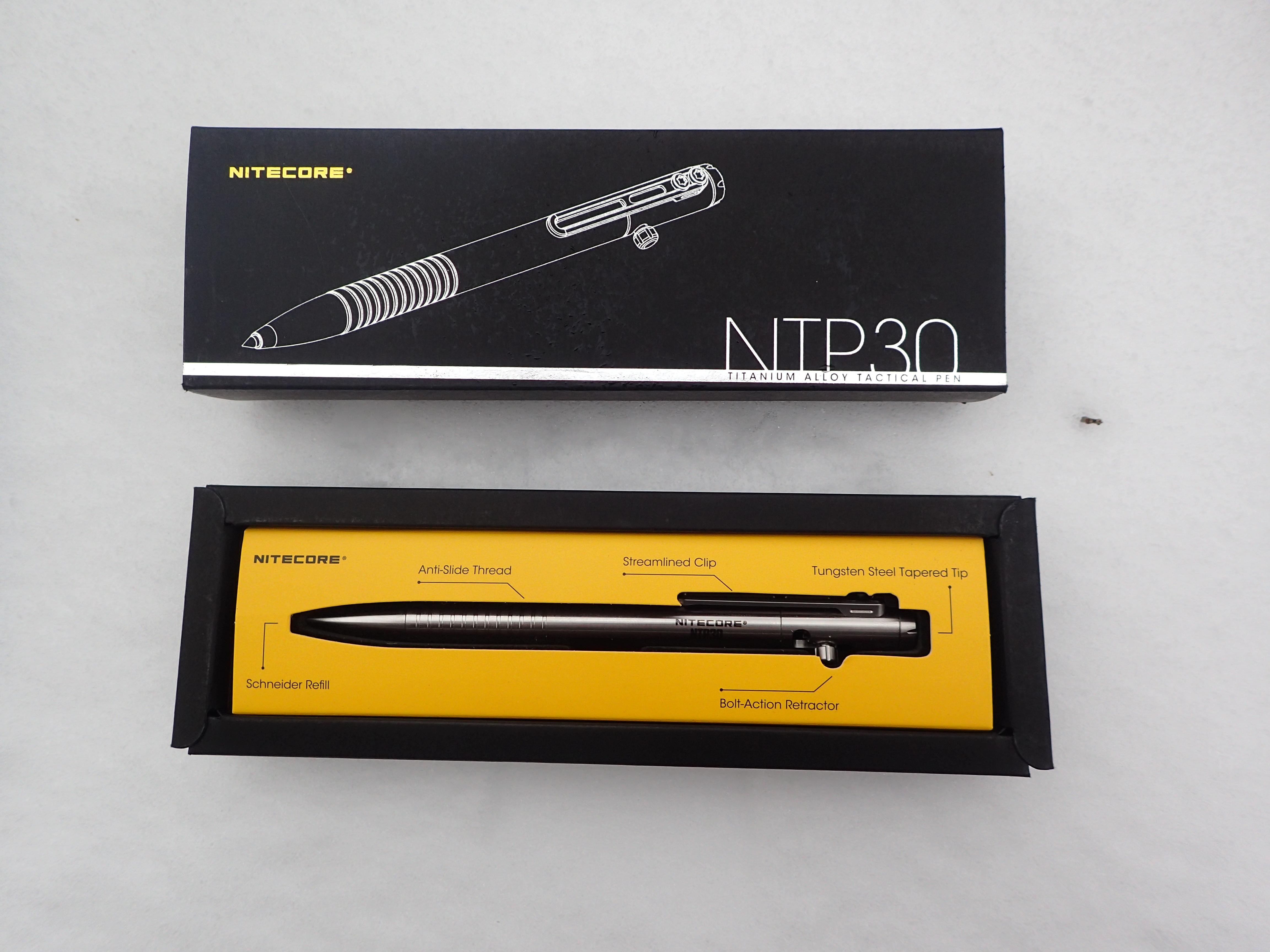 The pen comes in the box with a black Schneider Gelion 39 refill installed, with a small dab of wax to keep the tip safe and the ink in good condition during transport. Aside from the pen, there’s nothing else in the box. 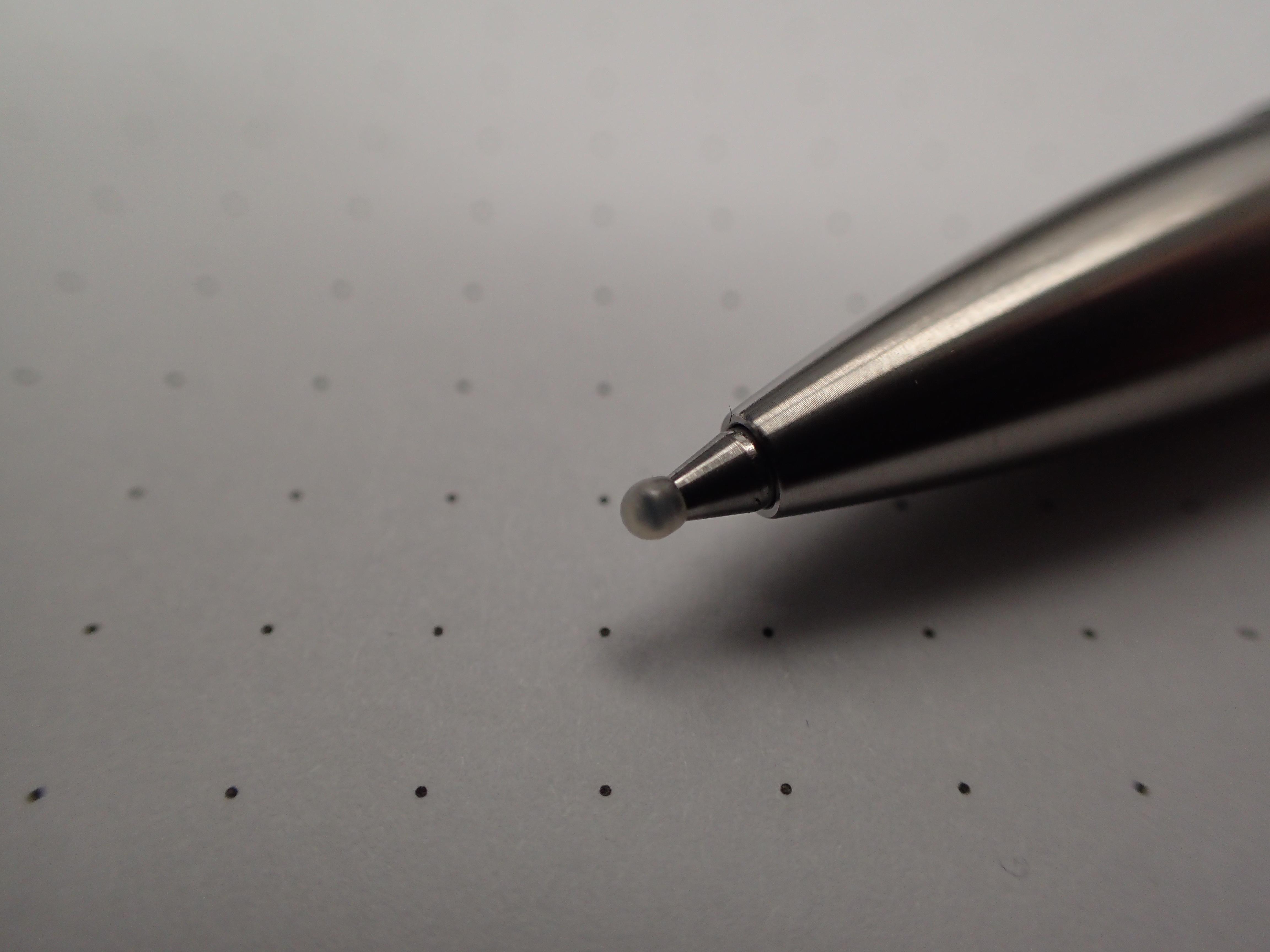 This pen is almost completely constructed from machined titanium. The tip of the pen body is a separate piece that unscrews from the body to reveal the refill and the spring. This is the main access to the refill, though it could be changed using the opposite end of the body as well. 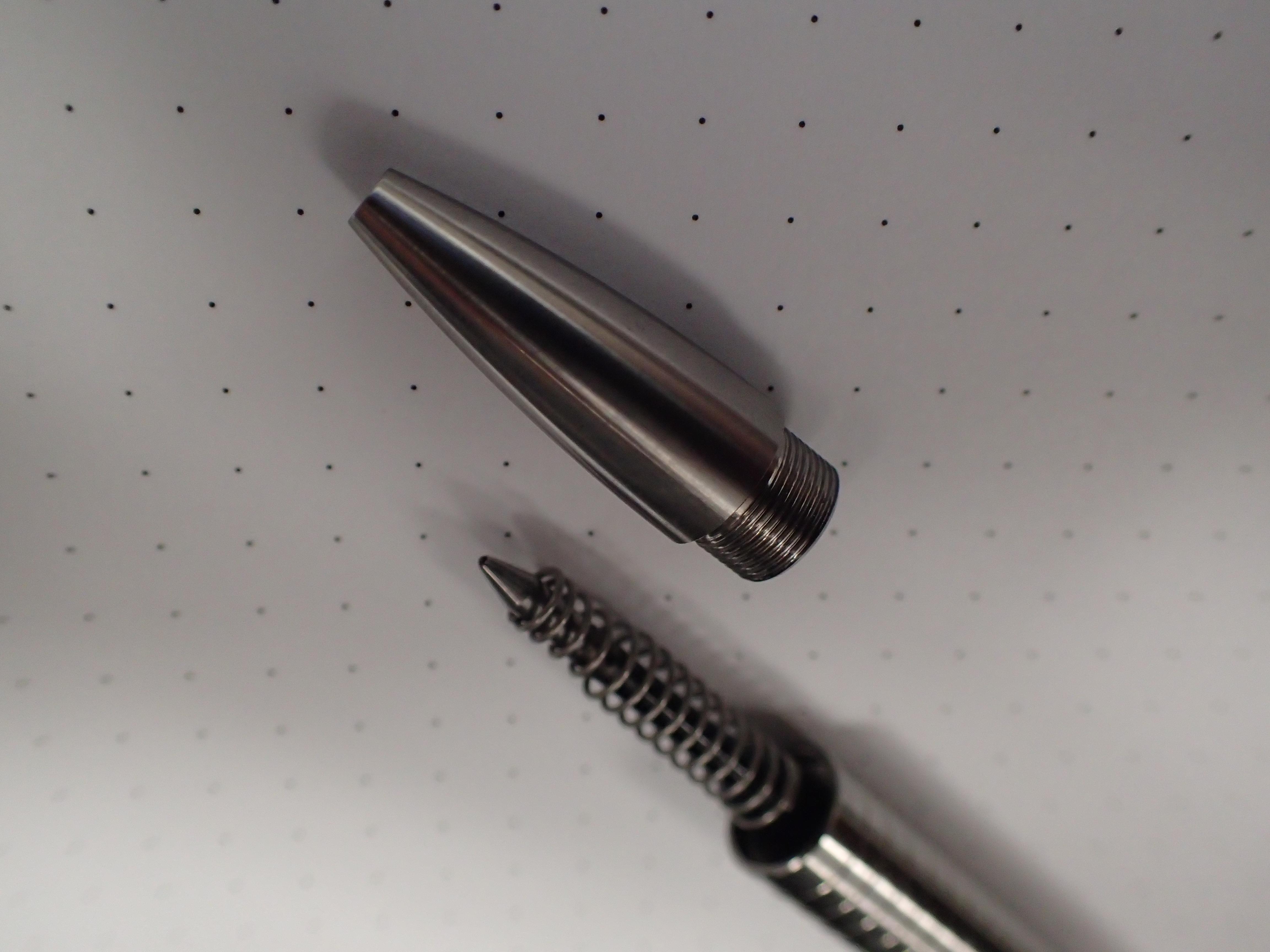 The body of the pen has 12 radial grooves cut into the lower section to help with the grip. The rest of the body is smooth, measuring 9.3 mm in diameter. Towards the top of the body, the brand and model are lasered into the metal. Note that the end of the clip makes contact with the pen, so unscrewing the body from the top end could leave some marks on it. 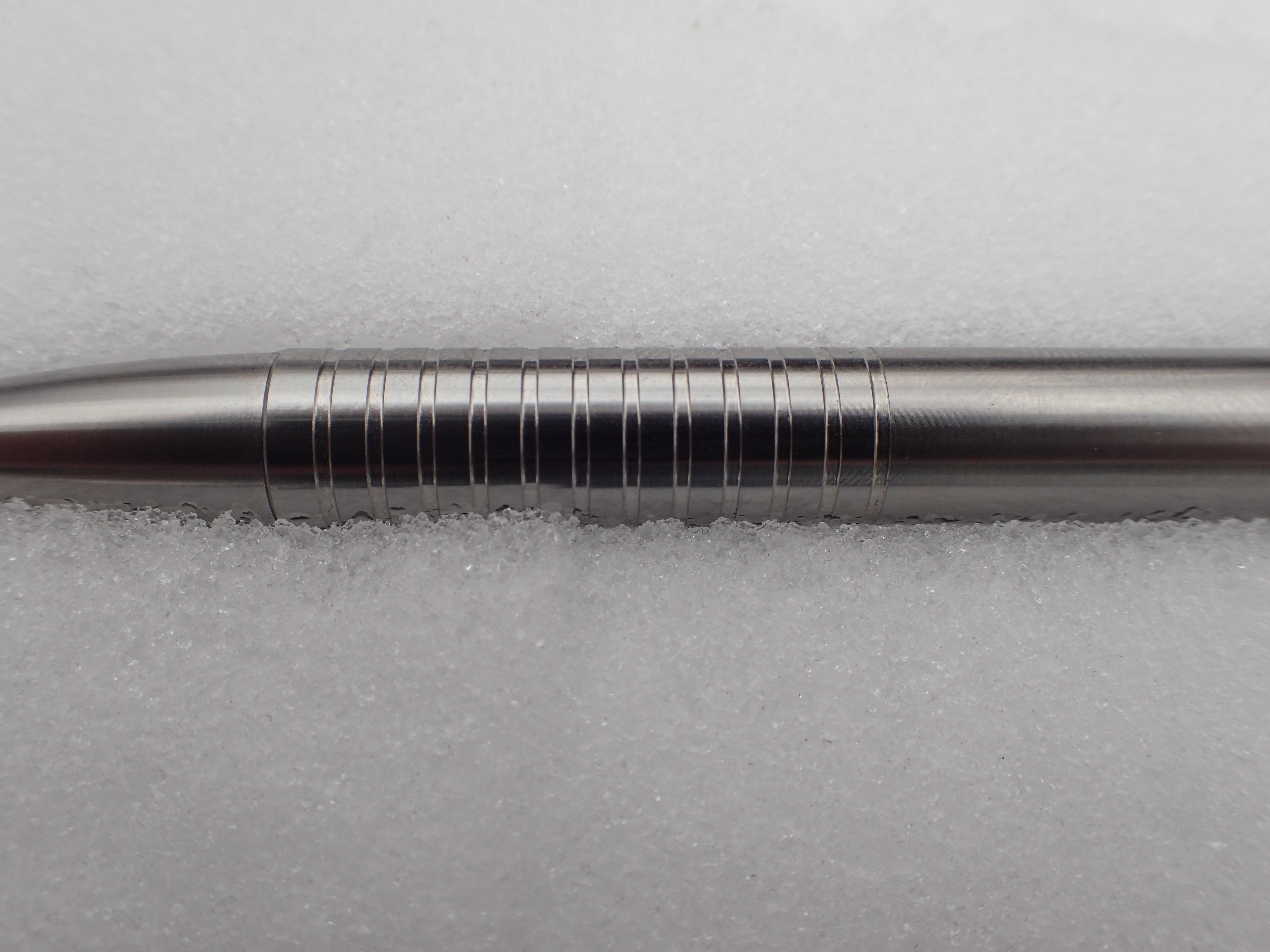 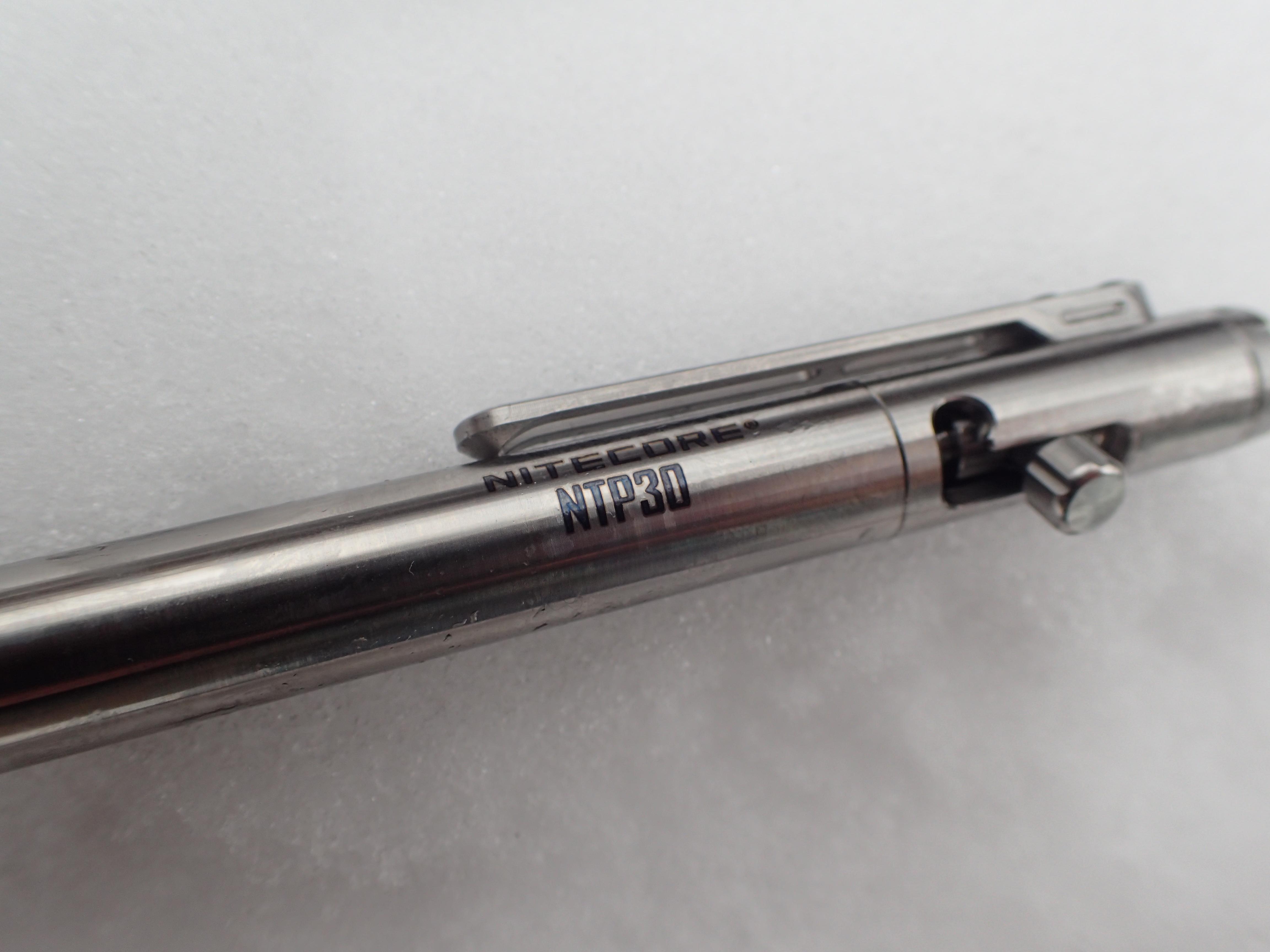 The next portion of the pen holds the mechanism in place. The titanium bolt used for the mechanism, along with the slot it travels along, are visible from the outside here. This can be entirely disassembled just by hand, unscrewing both ends and the bolt itself. This part of the pen is also home to the clip, which is held in place by two steel screws. The clip has some machining marks that are almost invisible to the naked eye, but to be honest I kind of like them. 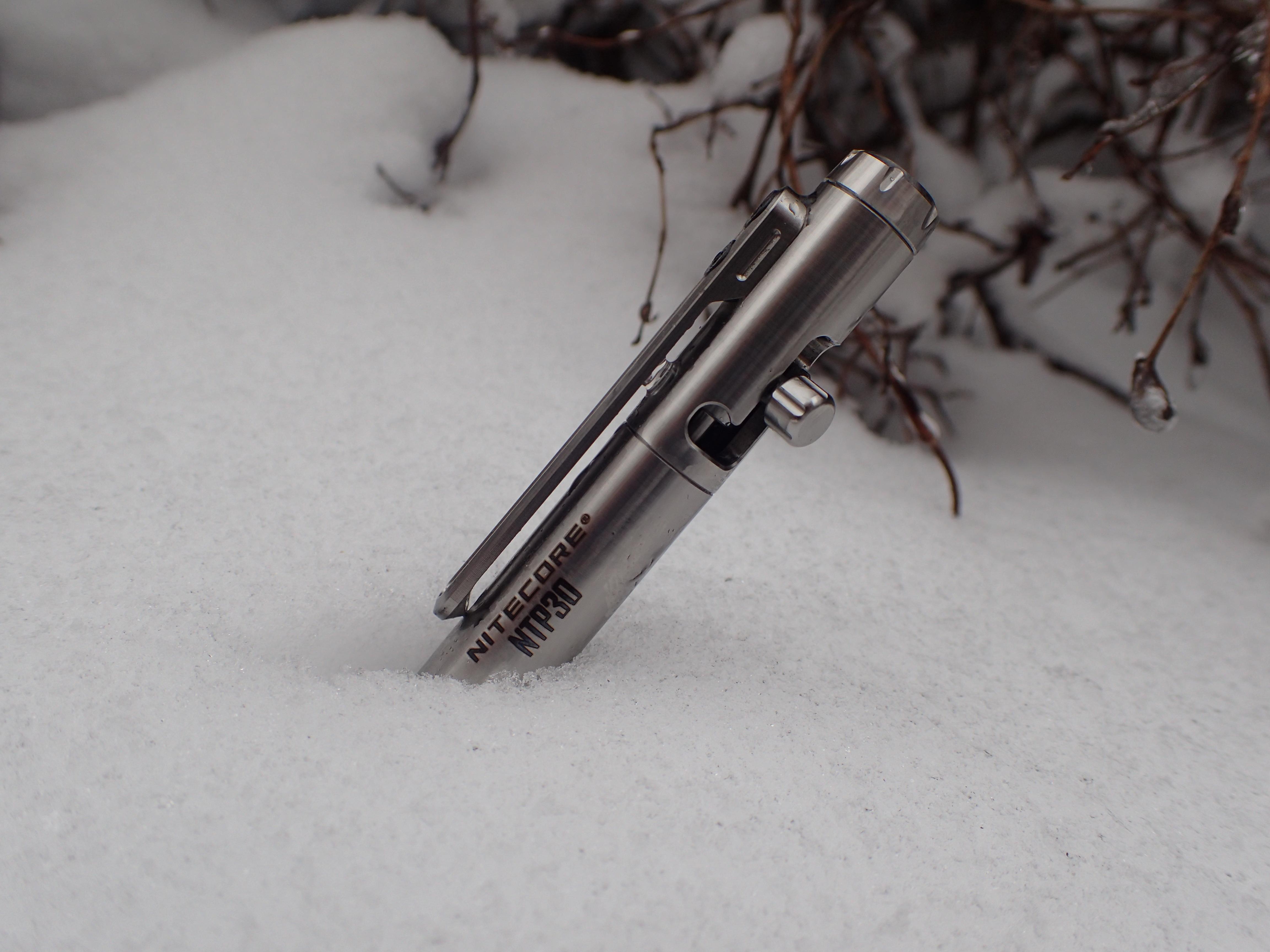 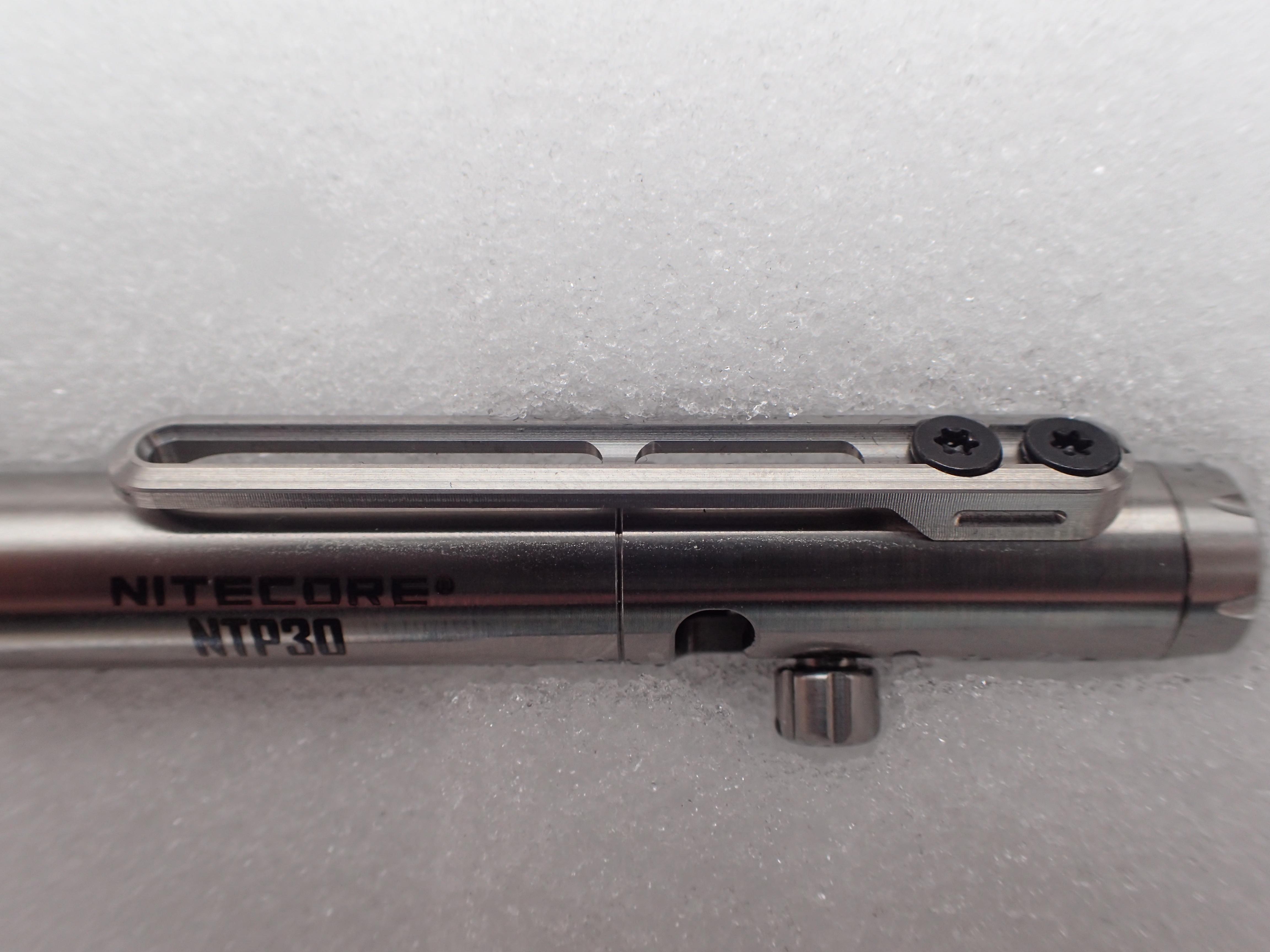 The tail end of the pen has another short titanium section, which holds in place a tungsten point. There are some nice angled flutes on the tail for aesthetics, as well as to help grip this smaller component while unscrewing it. Taking this ring off reveals the second spring used for the mechanism. 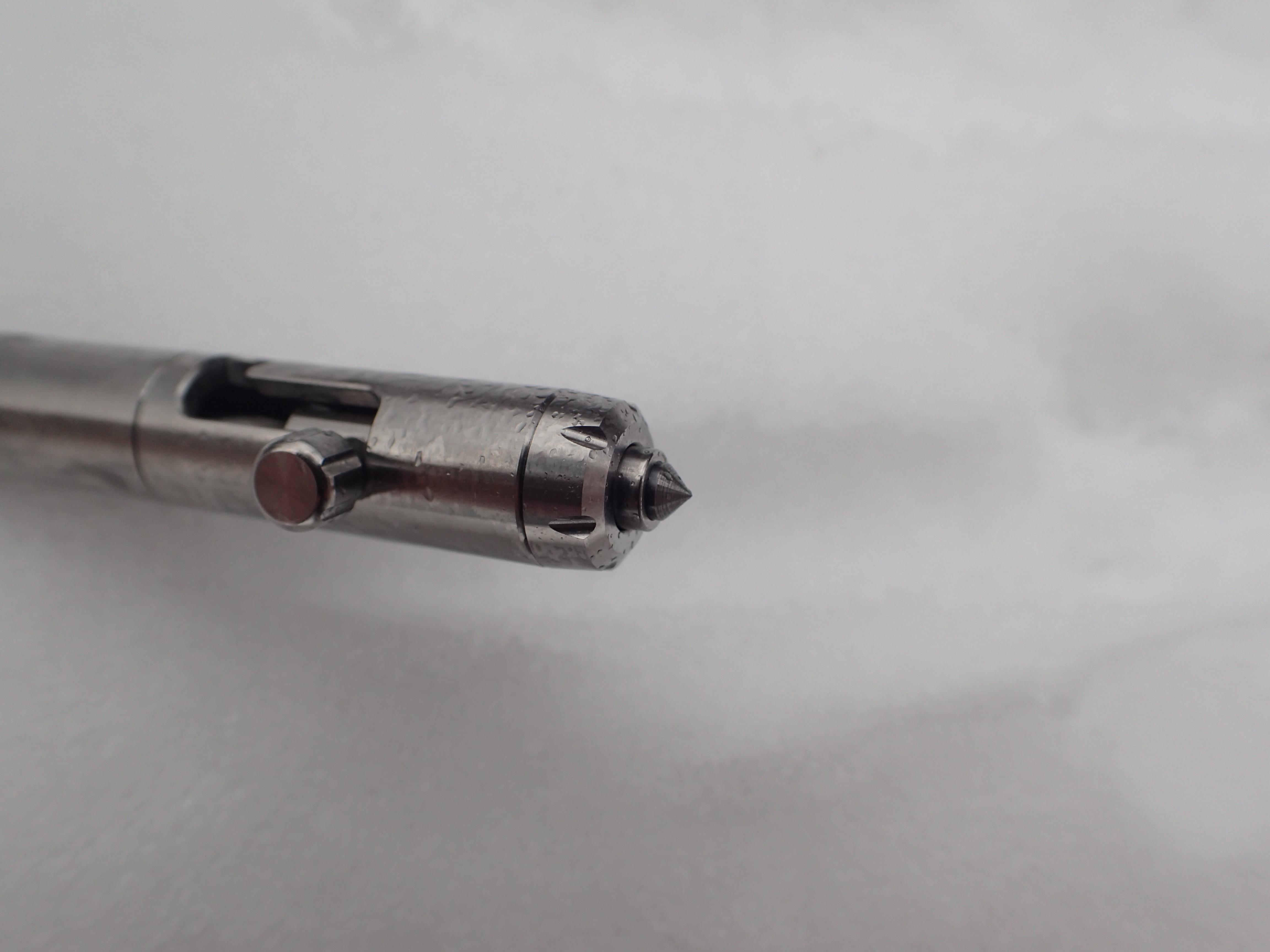 Ergonomics are obviously very personal, but I am a fan of how this pen feels in the hand. As can be seen by the pens I own and use most, I have a preference for slender pens with a bit of heft to them. This pen is lighter than my Rotring, which is made mainly out of brass, but the all metal construction still gives it a good feel.
My biggest concern was whether or not the shallow grooves would give enough grip, but I can safely say that they did. My hands can be oily at times, but this pen was never trying to slide away from me. The pieces all fit together extremely well without any play, which is important for a good feel in my opinion.
In terms of retention, the included clip works well, but it’s very tight. I could slide it onto the cover of a notebook without issue, but I had to pull on it a bit to get it to slide over thicker materials like my jeans. 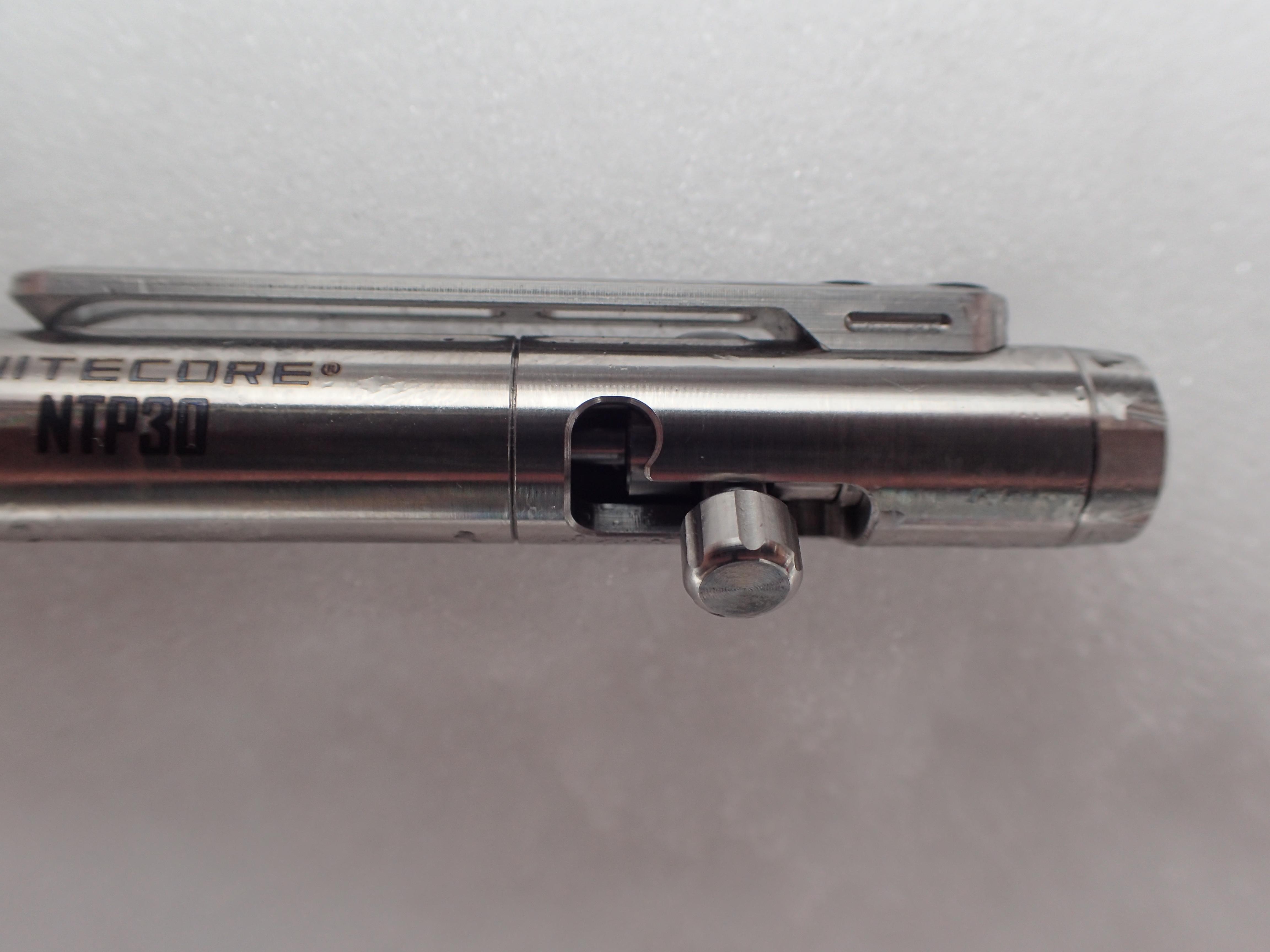 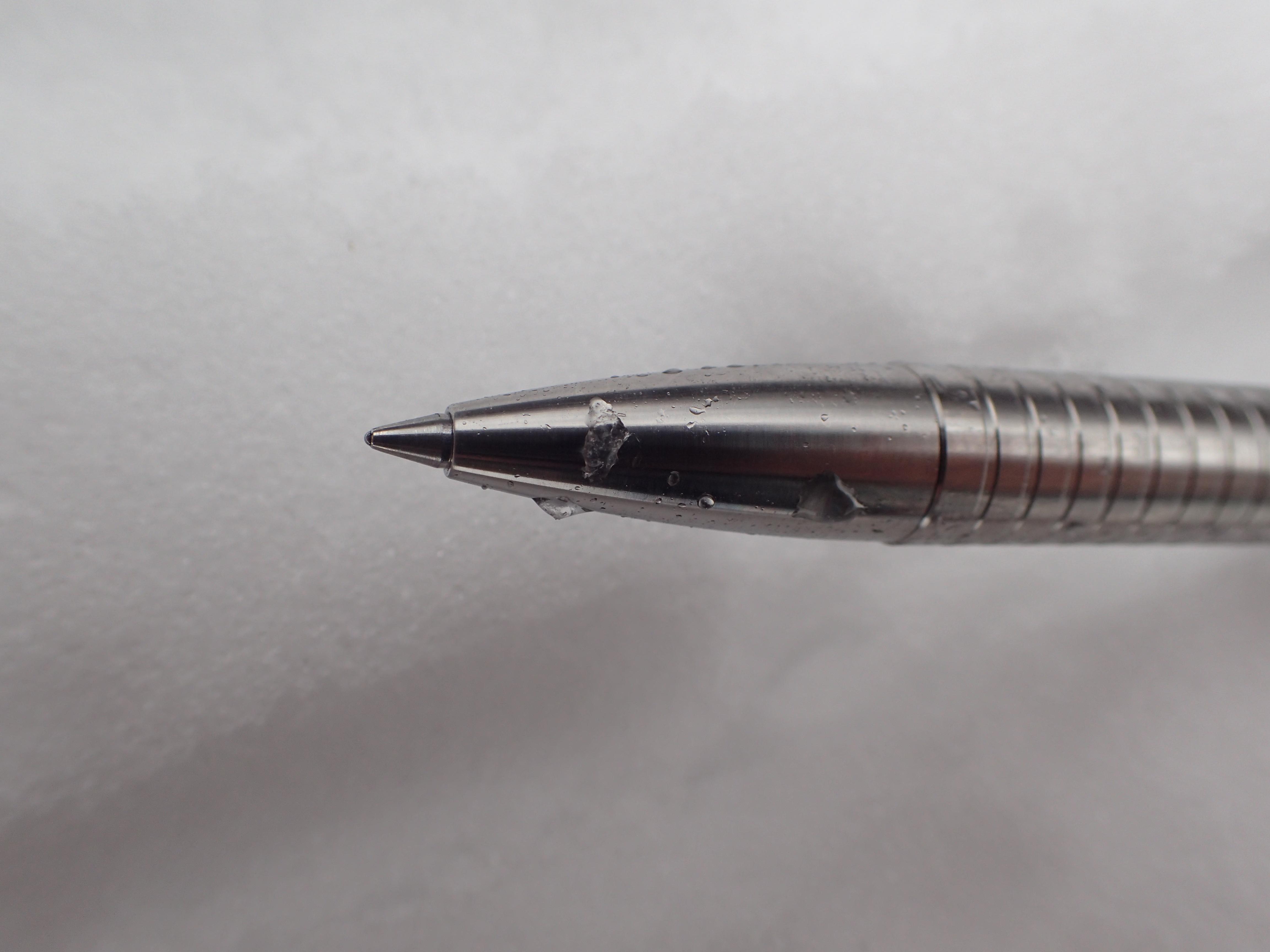 The black Schneider gelion refill included in this pen is a classic rollerball refill. I found it wrote extremely similar to the Lamy M63, a refill many readers might be familiar with, but lay down a bit of a thicker, smoother line.

For the writing enthusiasts, the real draw here is that the pen will work with any of the Parker style refills. My trusty blue Quinkflow refill slid right in and worked just as well as the stock one. 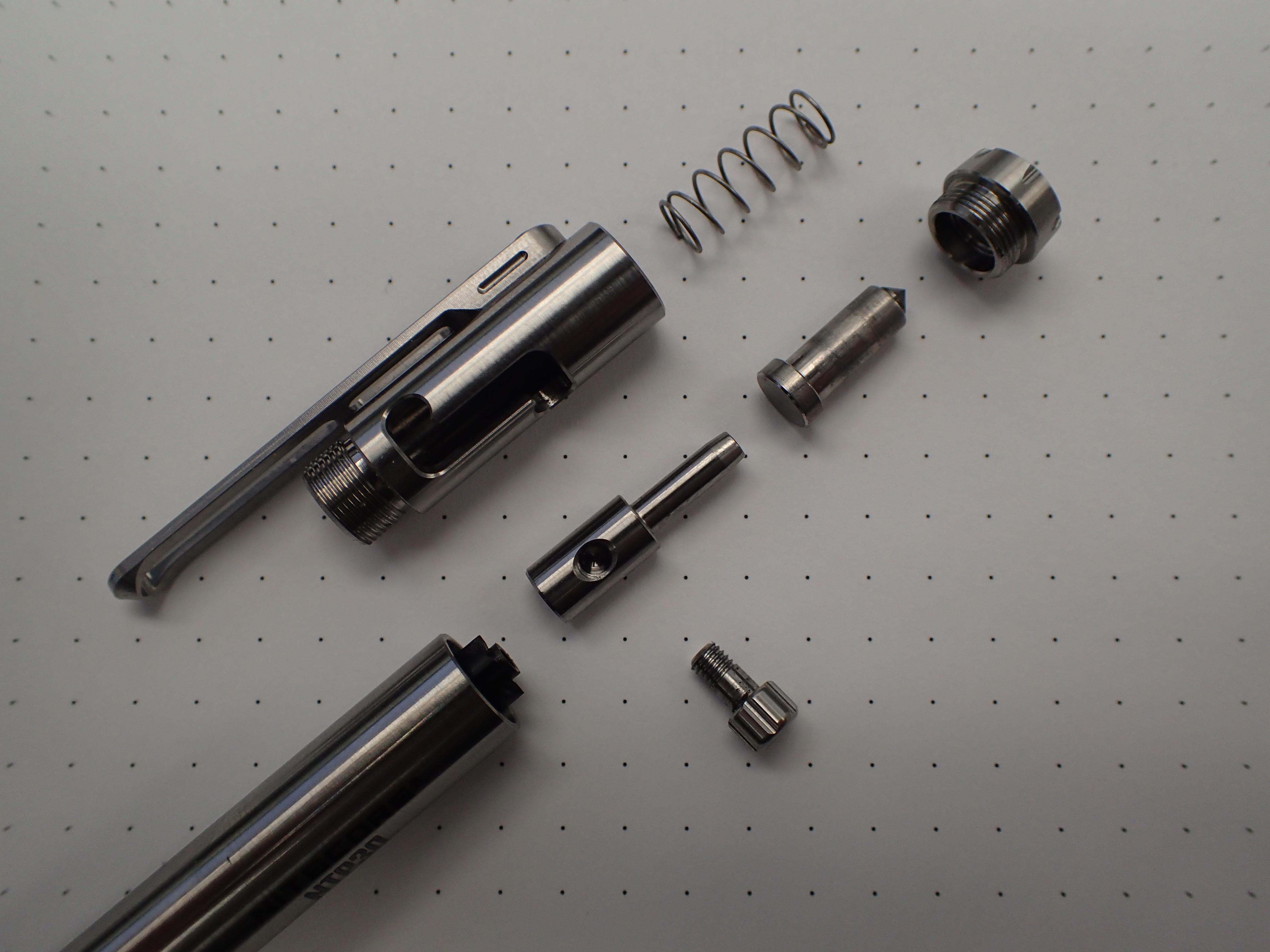 The mechanism used in this pen is referred to by Nitecore as a “bidirectional” bolt action. In storage, the two springs are balanced out holding the bolt in the middle of the groove, and neither of the two tools is deployed. Pushing the bolt towards the tip of the pen will push the pen tip out, and lock it in place. Pushing the bolt towards the tail of the pen instead reveals the tungsten spike hidden in the tail end.
In either of the deployed positions, flicking the bolt back to the center path will let it flick back to the ‘home’ position with both ends stored away. The action is pretty smooth, and loads of fun to play with. My one major complaint with this pen is that if you retract the pen slowly, it can ‘catch’ internally, with the pen retracted most of the way, but sticking out a tiny bit. Speaking with some other people who have this pen, this may be an isolated issue with the one I have received.
One added bonus to the second locking position of this mechanism is that it can be used to lock the pen closed and ensure the writing tip isn’t exposed while it’s stored away in a pen or a bag. This mechanism works just as well if the tungsten spike is removed, so it isn’t deployed and scratching a hole in your pants.

Nitecore markets this as a ‘tactical’ pen due to the spike in the tail. I was personally worried that the pen would be overly large when I got it in, but that wasn’t the case - it’s actually quite svelte and classy.
The tungsten spike on the tail end is quite sharp. I didn’t use it to break any glass or hit anyone with, but I did find it useful for scoring or etching on materials that won’t take ink. If you’re planning on taking the pen on a flight with you and are worried about it getting confiscated, note that the tip is easily removed without affecting the function of the pen.
I would love to see more accessories that could fit into this end, such as a stylus, a driver bit, or a sim-removal tool.