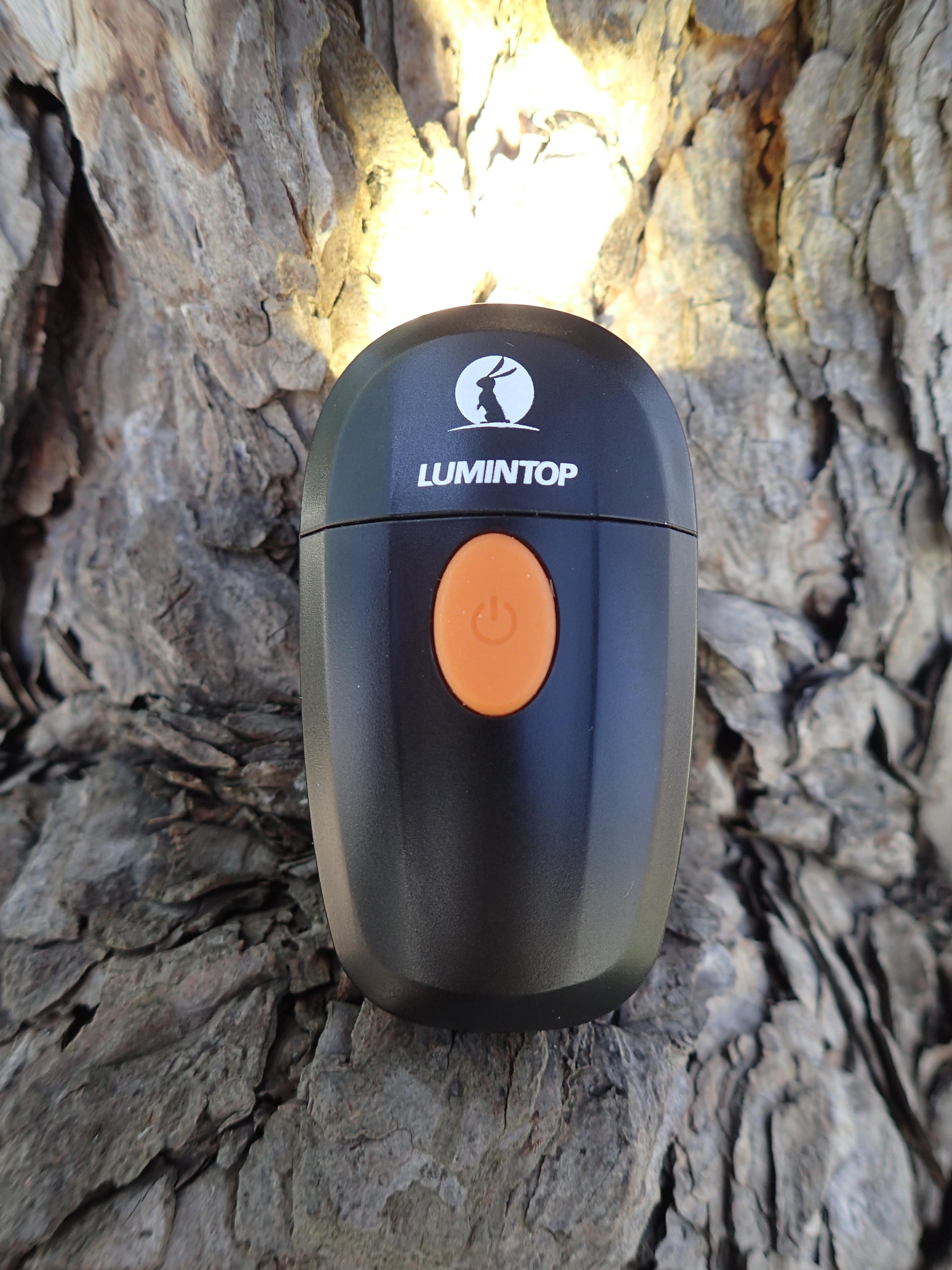 Lumintop sent me their new C01 bike light for review. This bike light uses an XP-G3 inside a unique reflector to give a shaped beam for city riding. The light has a backlit button, an integrated cell, and an included bike mount.

This is a good bike light for the price. I would like it to have a replaceable cell, and I wish it didn’t rely on a rubber flap for waterproofing, but neither of these were real issues during my use. It’s a major bonus for me that the beam is properly shaped for city riding.

The C01 is made almost entirely of black plastic. The small, rounded shape makes it easy to slide the light into a pocket between rides. The top of the light features Lumintop’s logo and an orange button. The front of the light has a metal reflector behind the bezel, which is held on by two hex screws. This shaped reflector is the most notable part of the light, and it’s important for city riding. When you’re riding on roads, you want to see the road and bee seen without blinding oncoming traffic. 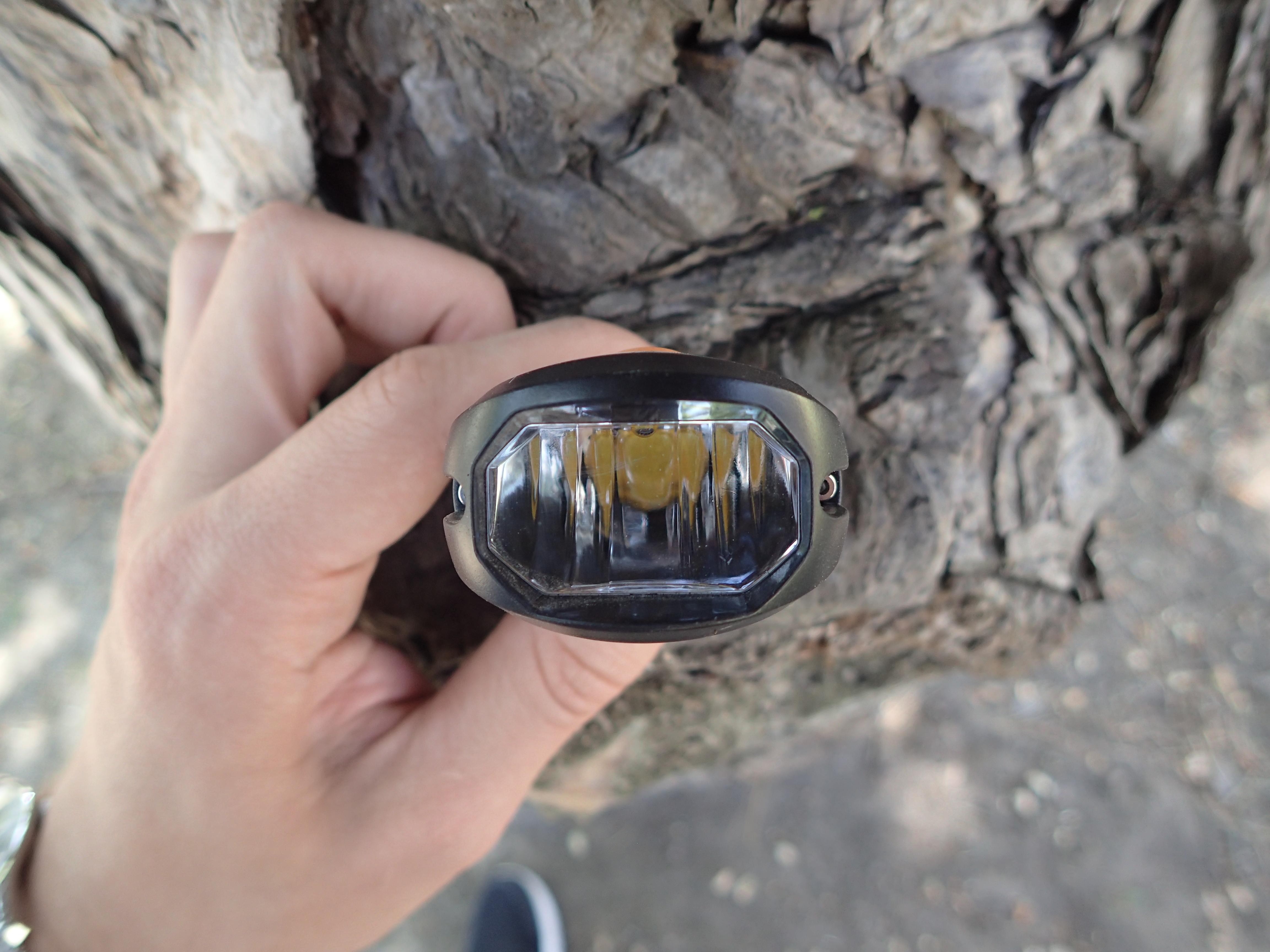 The bottom of the light has a slot for attaching to the bike mount, and the rear has the USB port for charging, which is hidden behind a rubber flap. I’m not a huge fan of these flaps, as they can fail over time. In this instance, you can see some space around the micro USB port, so make sure the flap is secured before riding in the rain. 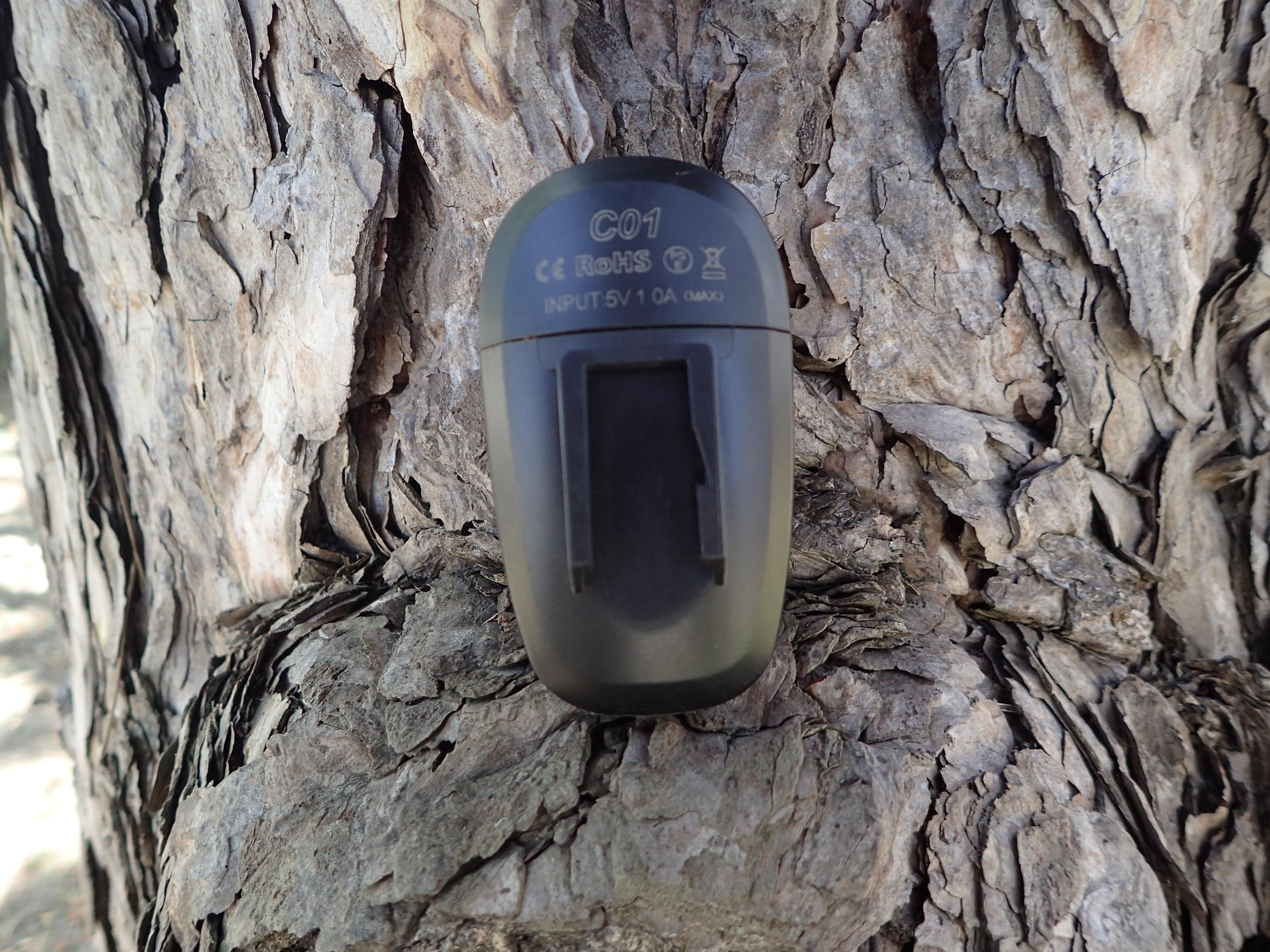 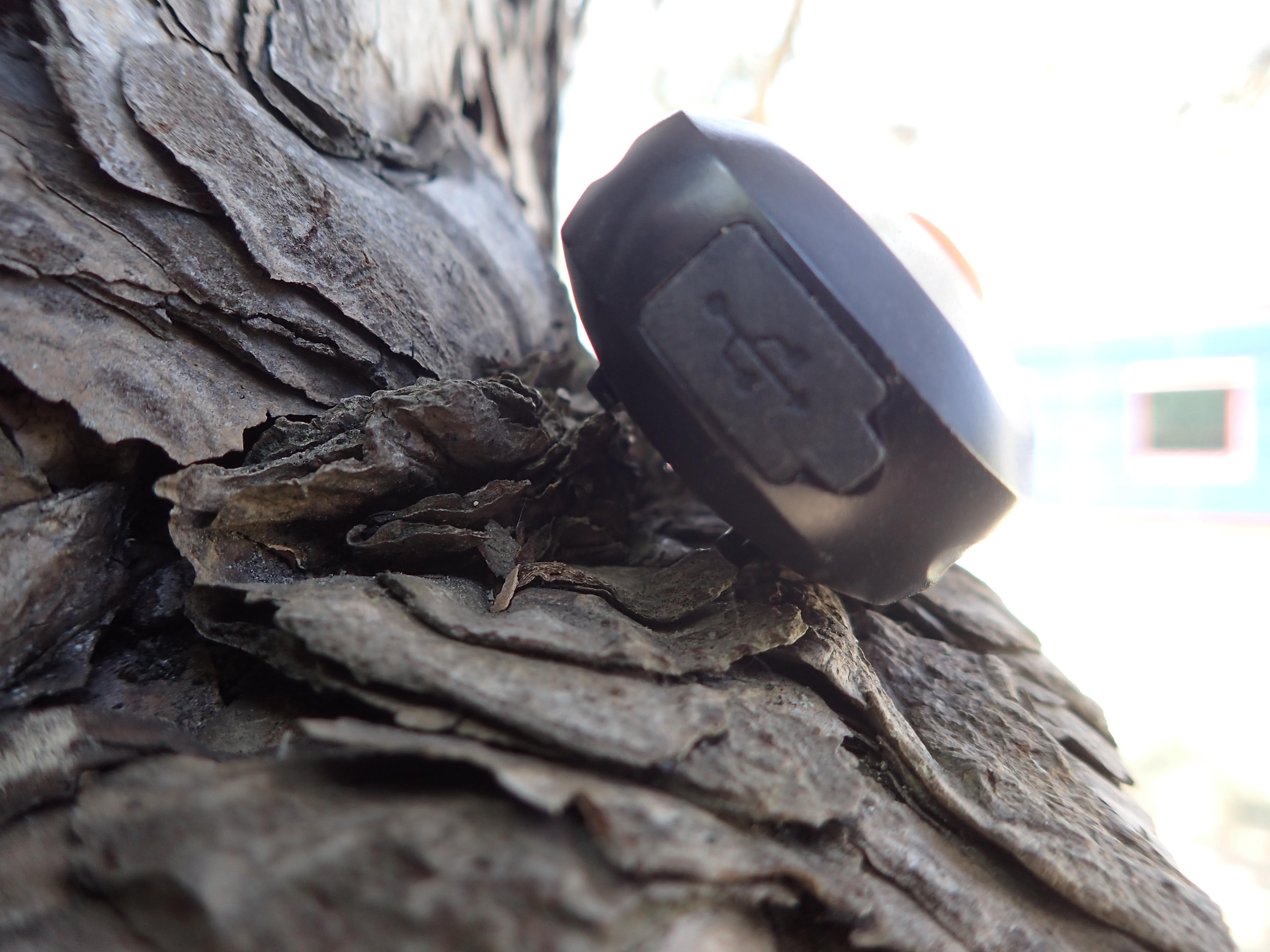 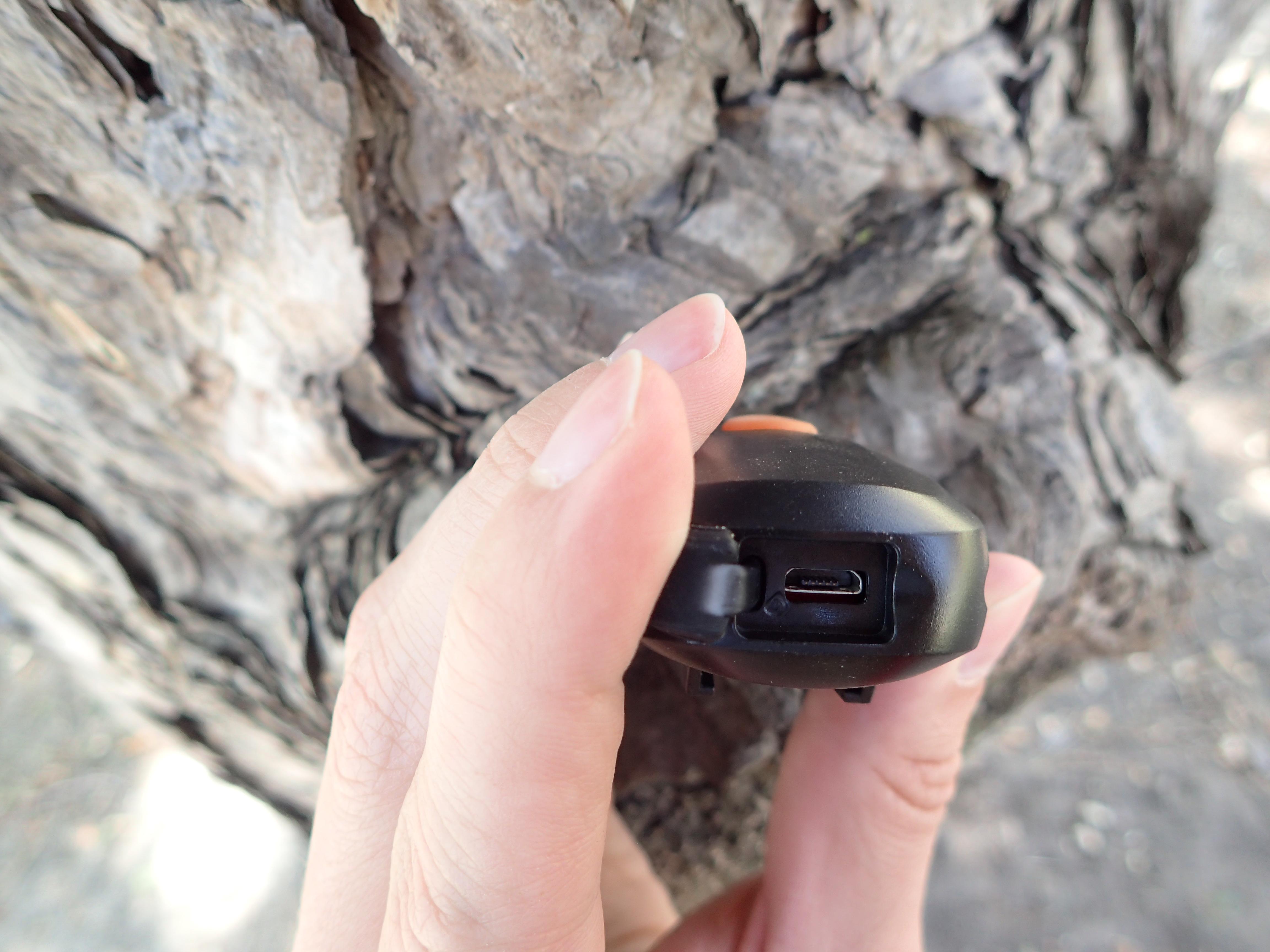 In the box, Lumintop includes the light, a charging cable, and a bicycle mounting bracket. There’s also the manual and warranty card. All the pieces are well packed in a piece of foam with cut-outs. 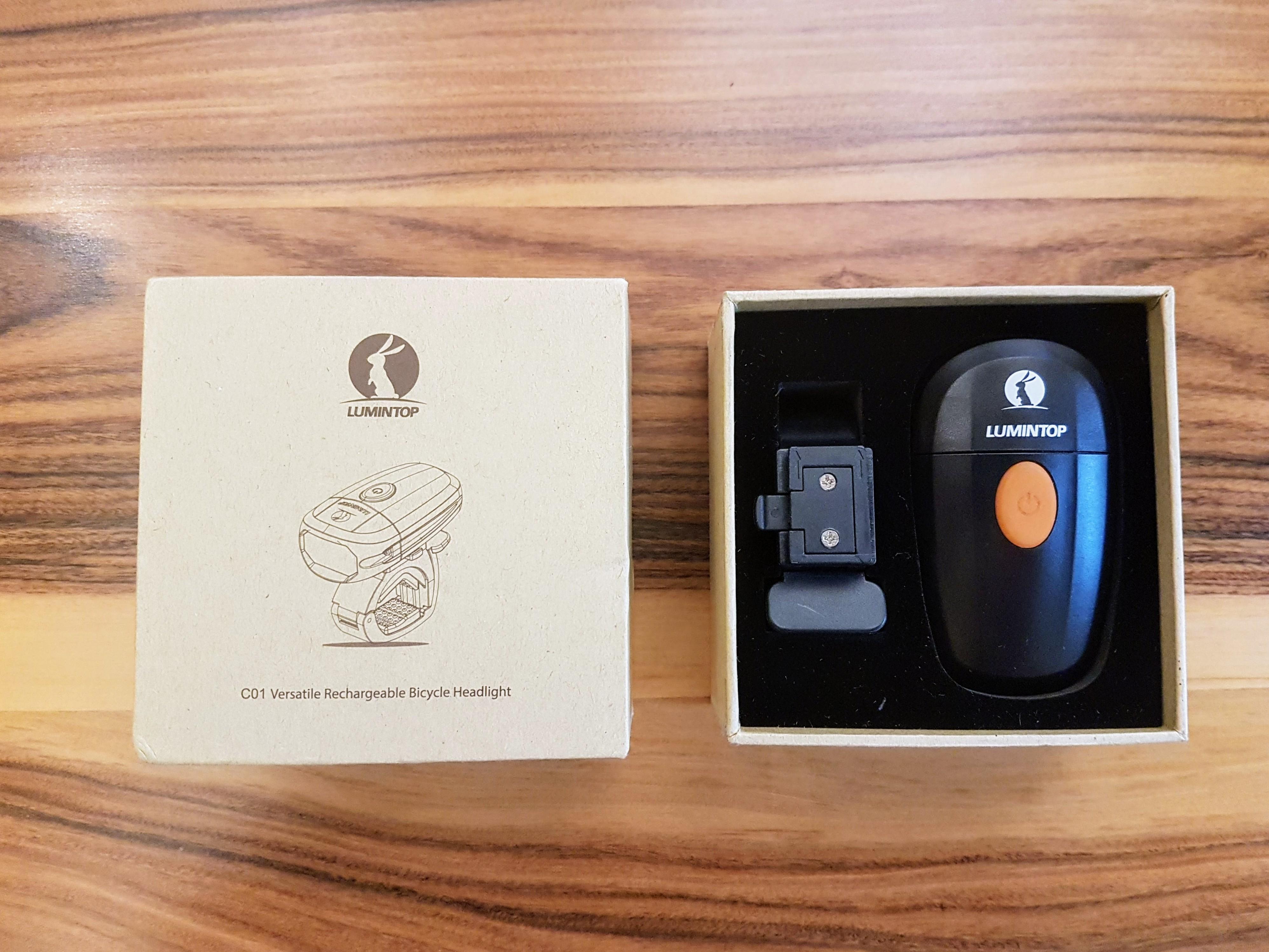 The bike light has three steady modes and three blinking modes. From off, a single press turns the light on in the last used steady mode. While on, tapping will cycle through these modes, which Lumintop states as low (75 lm), medium (225 lm), and high (400 lm). A long press will turn the light off.
If the button is held for longer while on (4 seconds), the light will enter into the blinking rotation. In this mode set, a tap will cyle from strobe, to SOS, and to beacon. Again, a long press will turn off the light. In my testing I found strobe to be a bit too spastic for riding without disturbing others, and the SOS and beacon modes didn’t seem to pulse frequently enough to ensure I would get noticed in time, so I mostly used the light in the steady modes. A steady mode with a pulse, such as the biking mode on the BLF A6, would have been a nice add in my opinion. For a bike light, I would also like it if the flashing modes could be memorized.
Long press from off does not have any special action assigned to it, and there are no double press actions. There is no lock out mode on this light.

Lumintop chose a warm white emitter for this light. Warm white emitters have been reported to cut through some foggy situations better than cool white, and I find them more pleasant to the eye. 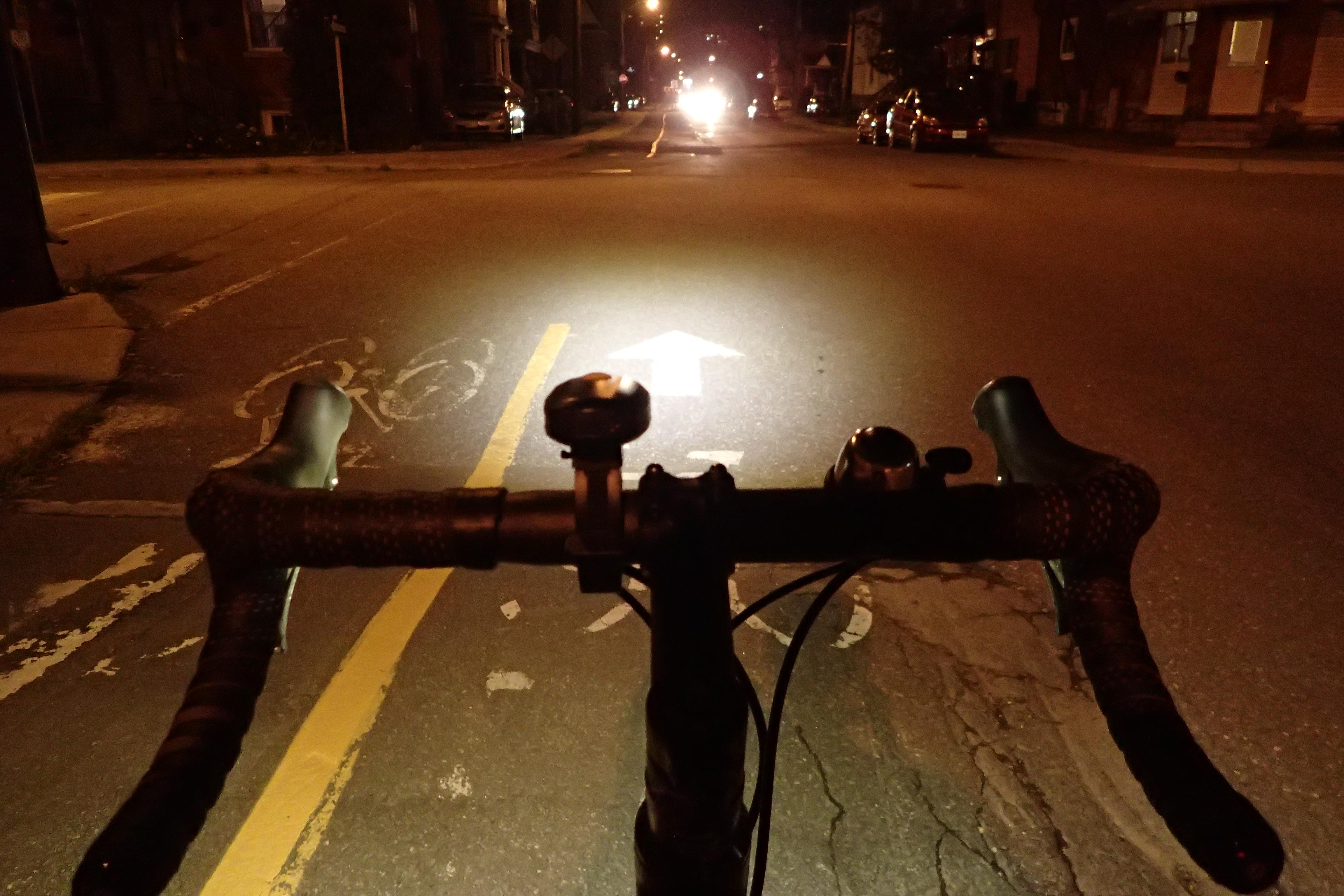 The beam shape has a sharp cut off at the upper edge, which makes it easy to prevent shining light into oncoming traffic and creating a hazard. In my experience, a lot of bike lights miss this crucial detail. The beam shape that Lumintop has made here does a great job of illuminating the path or road in front of your bike, right down to where your front tire touches the ground. There are some artifacts in the beam above the cut off, but these are faint and are not noticeable during use. 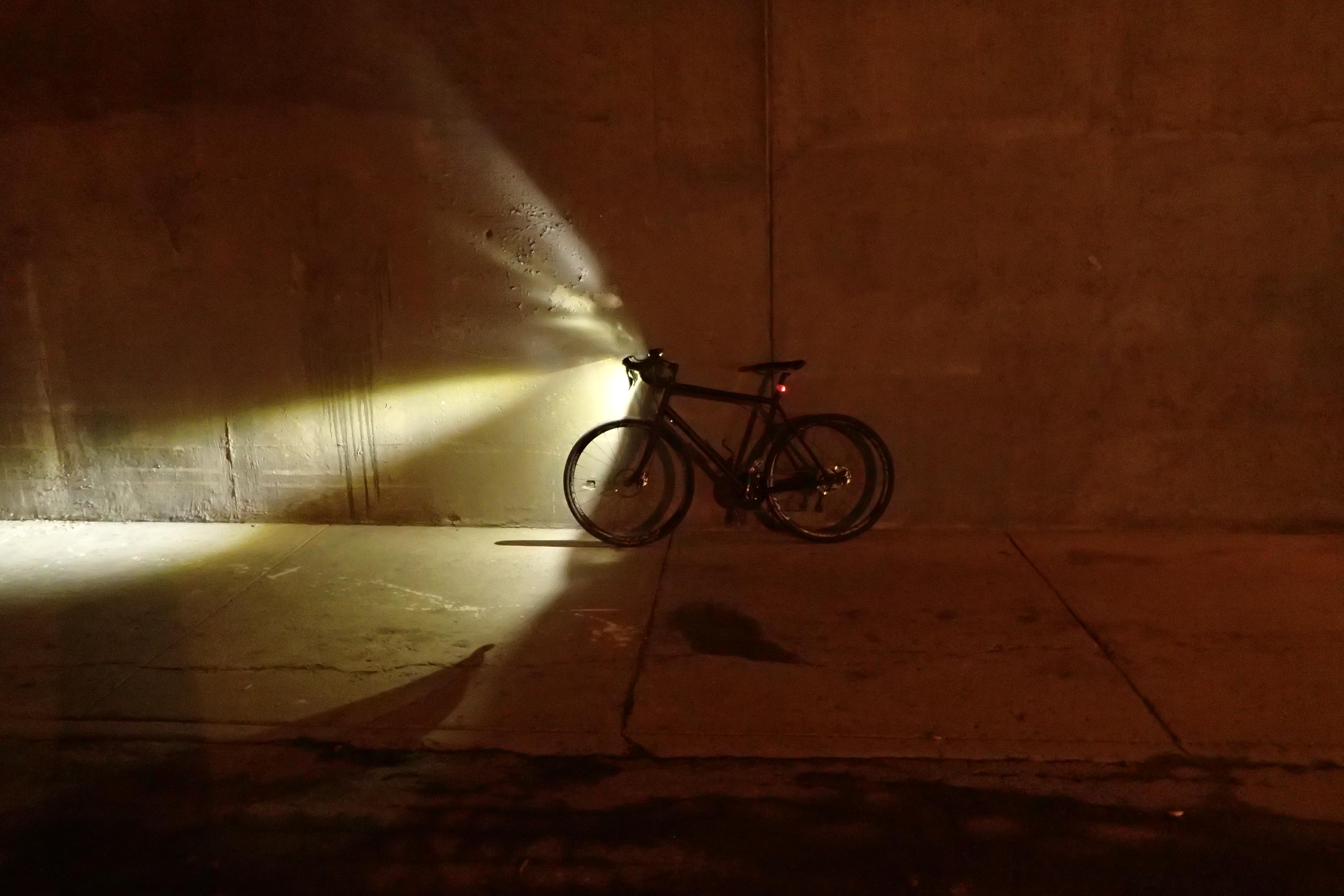 Being a bike light, this product comes with a bike mount as well. The mount is ratchet style, and doesn’t require any tools to install. All you have to do is place the mount around the handle bars and cinch down the clip. There’s a tab on the mount in case you need to remove it in the future. 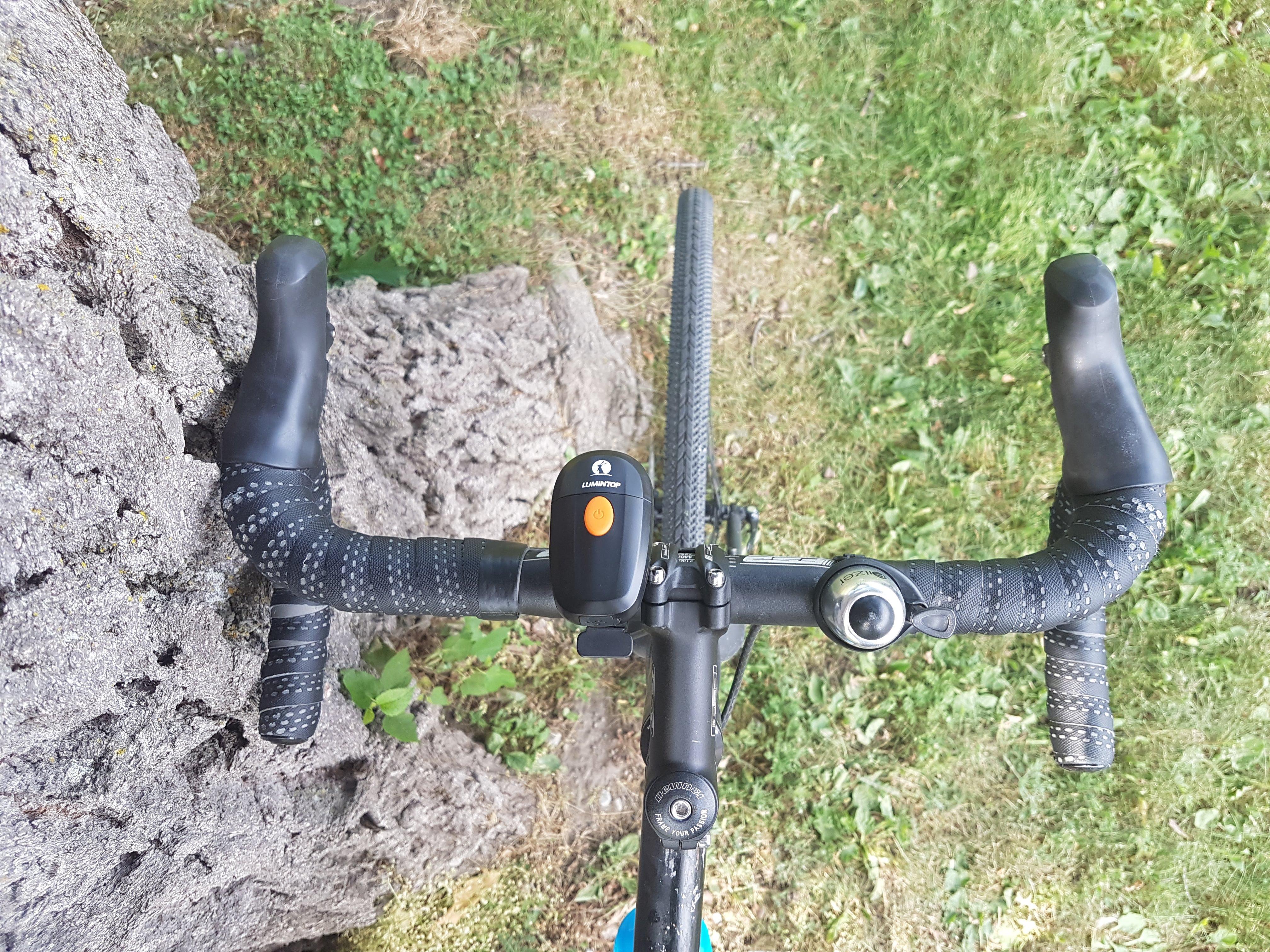 Once the mount is installed, the light slides on and latches into place. There’s a small push button on the clip that needs to be depressed to remove it, so the light won’t fall off during a ride. The release is easy to operate with one hand once you’re at your destination. During my rides, the light didn’t shake out of position or come loose even over some pretty brutal pot holes. 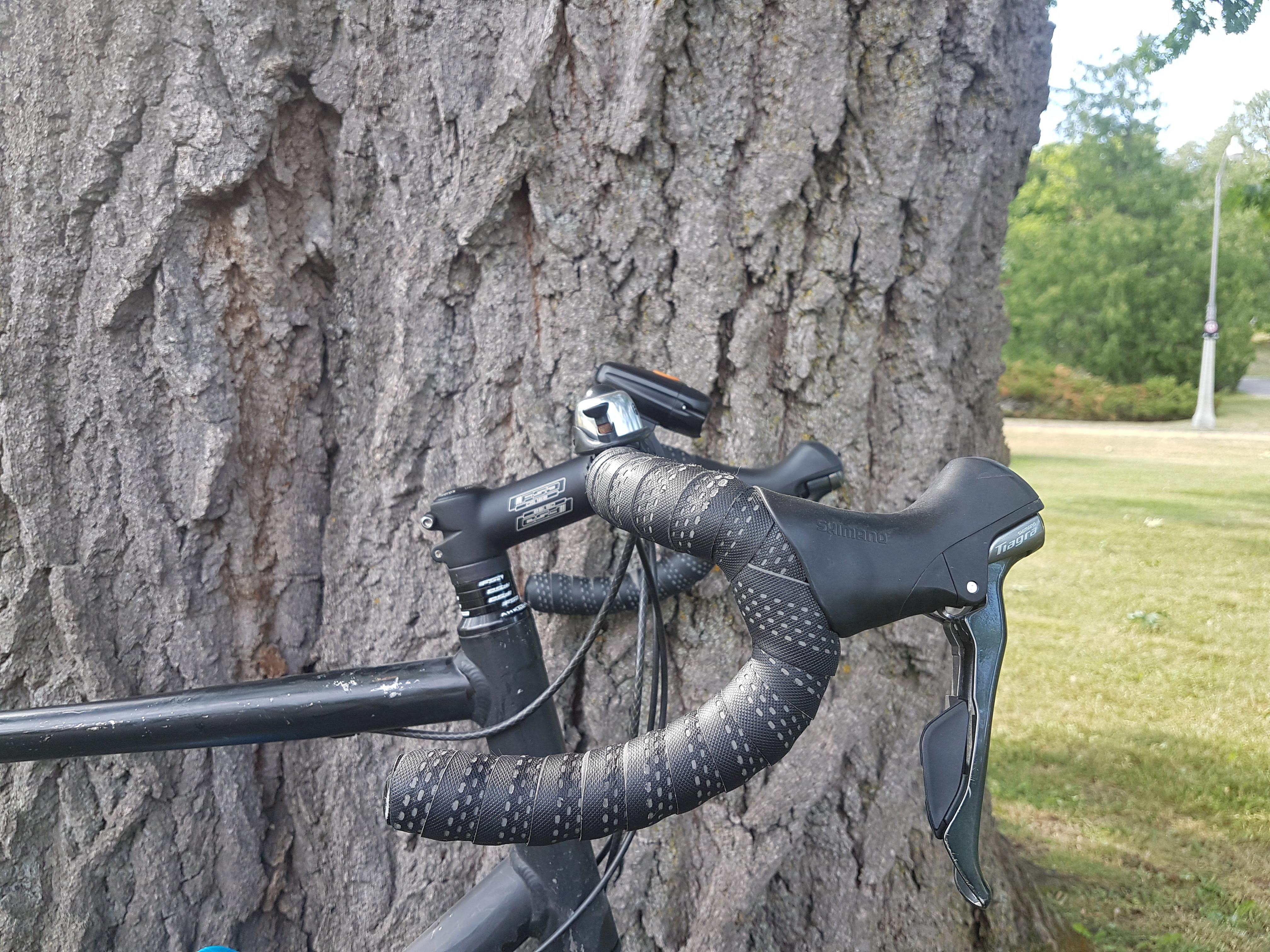 Since this is a dedicated bike light, there is nowhere on the light to attach a lanyard or a pocket clip. That would be silly.

The C01 is powered by a sealed internal cell, which Lumintop states has a capacity of 1400 mAh. My unit ran for 1 hour and 28 minutes on high. Output was very stable for the run, but this falls a bit short of the rated 1 hour and 45 minutes claimed. 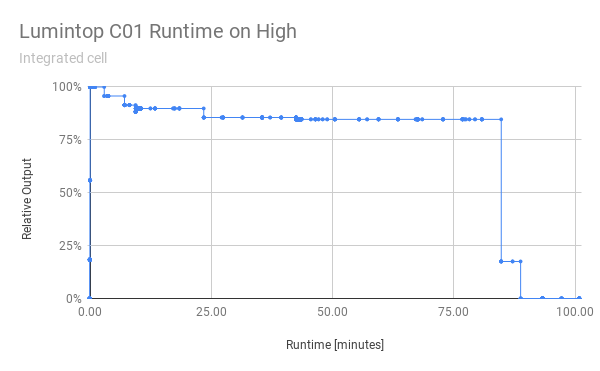 Runtime on medium ran for 3 hours and 2 minutes, again falling short of the claimed 3 hours and 30 minutes. This run was also very flat for the duration of the test. 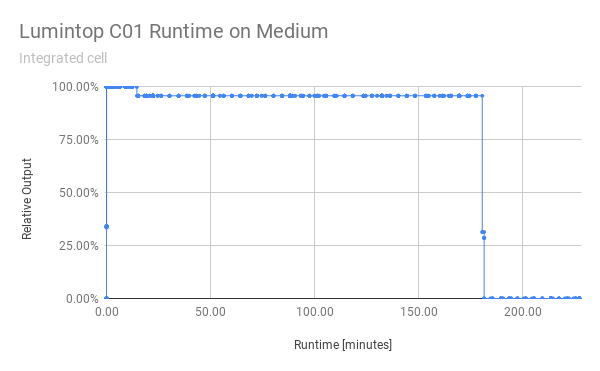 The LED behind the switch turns red when the light is plugged in to charge, and green once charging is complete. The included micro-USB charging port makes it easy to top off the charge at home or at work, since that cable is common. During use, the light will begin to blink red if the charge is low, and will blink faster if the battery is very low.