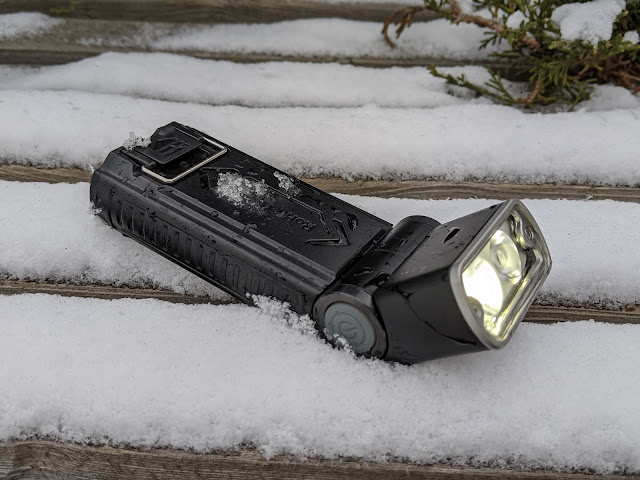 I love lights that do unconventional things, so I was excited to try this one out when Battery Junction agreed to send it over - the Fenix WT20R. This is a light that comes with a custom battery pack, but can also be powered from 2xAA batteries. The head rotates to convert it from a standard flashlight to a right angle light (and a bit beyond), and it has two separate LEDs for flood and throw.

This is really the sort of product that you don't need to read a review for - you already know if you want it or not. But I wrote one anyways, so here's the scoop: It's cool. The options for mounting, beams, and angles make it super versatile for a ton of purposes.
Is it the most practical or compact light for most of these uses? Probably not. Is it the smallest light out there for most of the things you'll use it for? Also probably not - but it is probably the smallest 2xAA light with a rotating head, a magnetic tail, and two beam patterns.
I think this is a great work light or a light to gift for a lot of people. It's convenient and pretty much guaranteed that you can find a way to shine it where you need it without keeping it in your hand. Some enthusiasts will certainly be bothered by the lack of a lower moonlight mode, but I don't think those modes are well suited to work lights that are often used in lit environments. I do think choosing a high CRI LED for one or ideally both emitters would be an improvement. 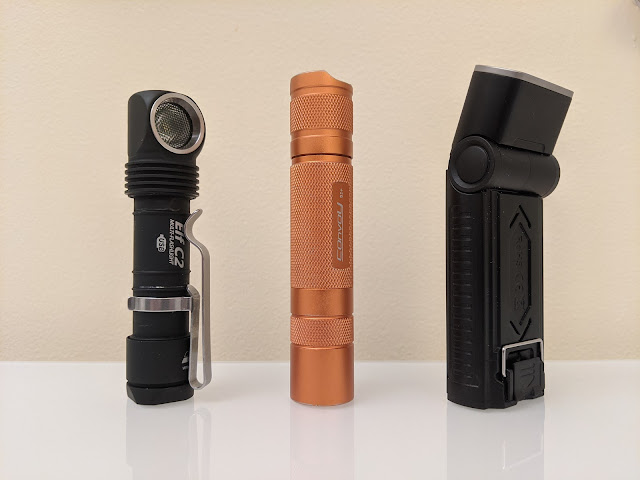 I don't really have anything else in this class to compare it to, but here it is next to the Convoy S2+ and Armytek Elf C2 for some sense of scale.It's a bulky light, but reasonably so with the feature set.

The body of the light is made of black plastic, but the head is made of aluminum for better heat transfer. 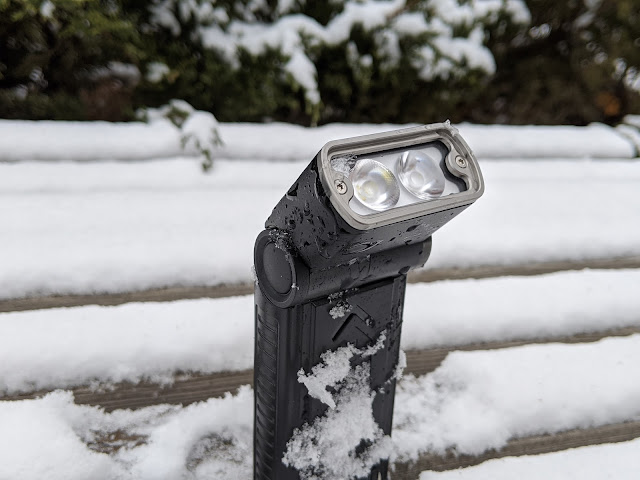 There's a bare metal bezel that holds the two optics in place - flood on the left and throw on the right, in the above image. You can also see one side of the hinge, which can ratchet to any angle between 0° and 105°. The angle adjustment is stable but easy to do with one hand, and has a ratchet-y click as you adjust it. 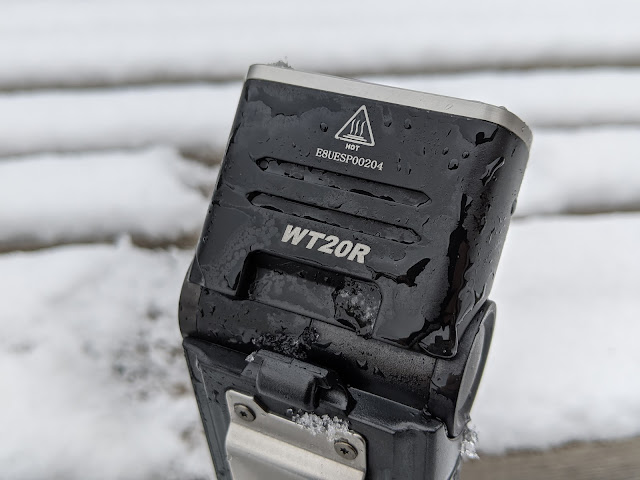 Here's another look at the top of the head and the hinge. The small loop above the clip is a lanyard attachment point. 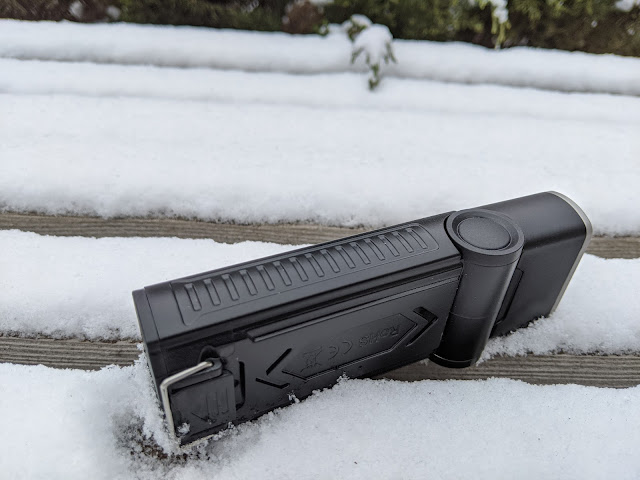 The plastic body has ridges along the side for grip. There's a steel bar lock to help keep the cell compartment from accidentally opening. 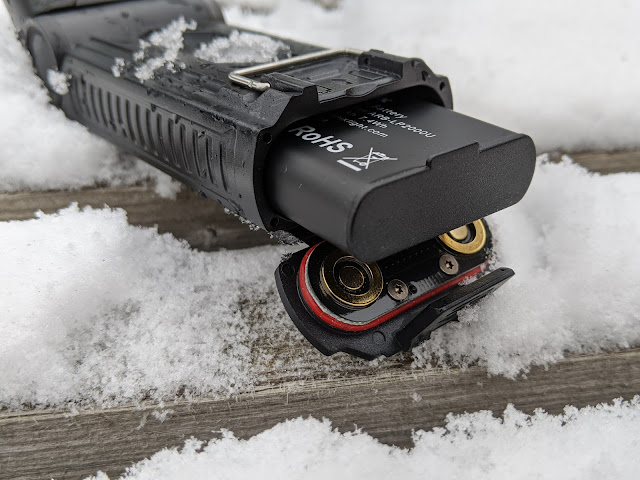 With the metal bar flipped up you can unclip the spring loaded battery compartment. There are brass contacts in the tail for use with AA cells, but they aren't used for the included cell. There's a spring at each of the two contacts inside by the head of the light. The tail is flat, so the light stands very stably, but there's no evident way to remove the magnet if you don't want it.

The light comes in Fenix' standard black and orange box. Inside, you get: 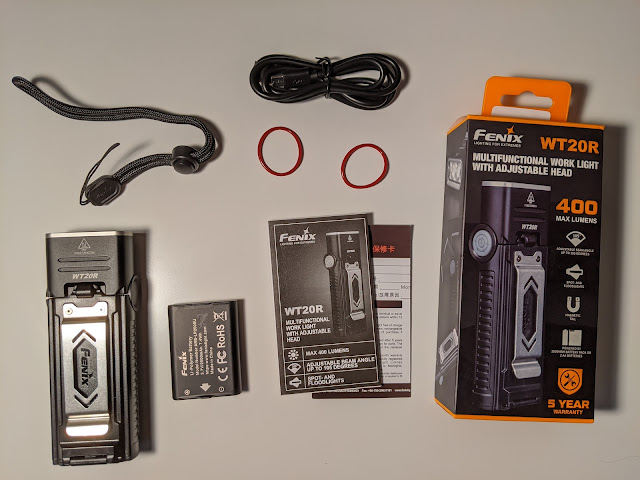 I like side by side lights, especially with the switch on the edge like this and the EC4GTS. It makes the switch easy to find, and the shape sits pretty naturally in my hand. 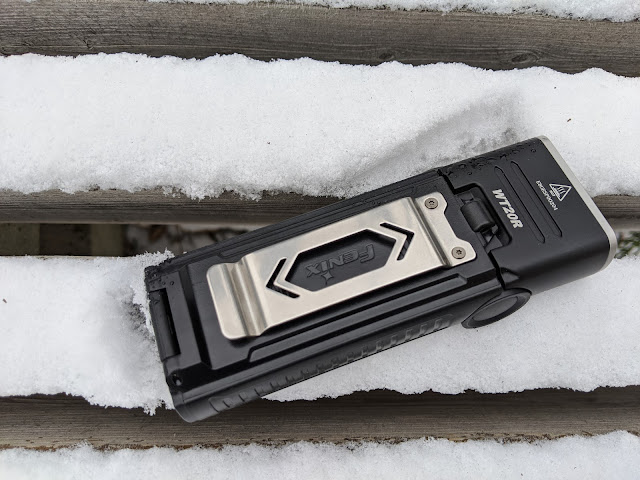 If you want to free up some hands, this light has no shortage of ways to mount it. First, this giant, flat steel pocket/belt clip, combined with the rotating head, mean it could easily be clipped to your chest or waist and pointed at your work. It's not a deep carry clip at all, but this light is a bit big to sneak into a pocket anyways. The clip holds the light head up, so I guess you could clip it to the brim of a hat if you really wanted to, but I think it would be a bit heavy for that. 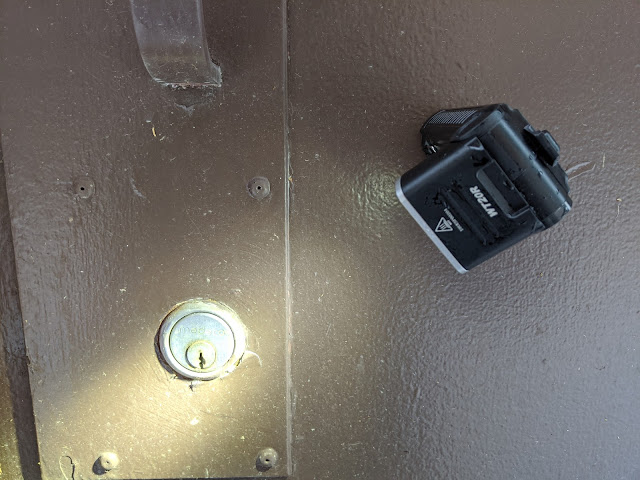 The magnet in the tail has no issues holding the light horizontally from a steel surface. The few degrees this can angle past 90 make it capable of shining back on the surface it's stuck to - a feature I always missed in other adjustable lights like the Rofis R3. 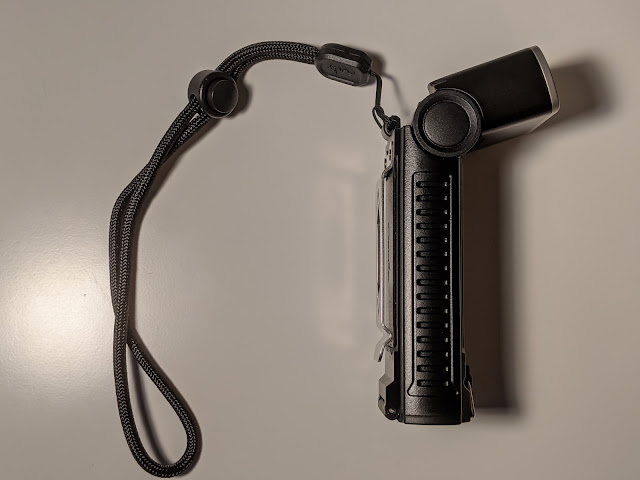 Finally, the included lanyard can be attached near the head for added security.

The single side switch controls all the modes on the light, and the UI is basic and intuitive. 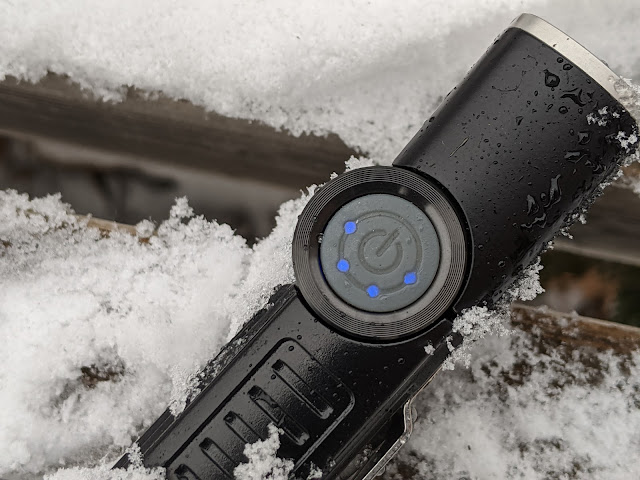 I don't really like long press for off, but at least when a long press is also required to turn the light on it's more intuitive for me. I like this uncluttered UI for this light, especially with the complexity of switching between two beams. 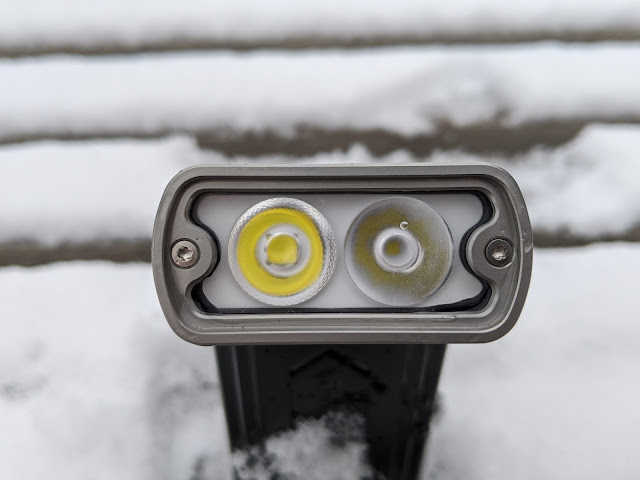 The light uses two undisclosed LEDs, but after some investigative work I'm fairly certain the flood emitter is a Cree XP-G3 behind a textured TIR, and a Cree XD16 behind a smooth optic for the throw emitter. 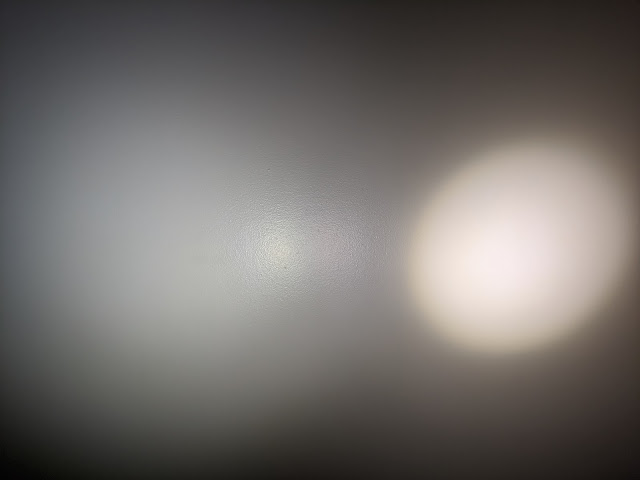 compared to my usual reference light, a 4500K E21A (on the right) the flood beam is extremely wide and smooth. The textured optic manages to clear up almost all tint shift, and the temperature is cool but not harsh. 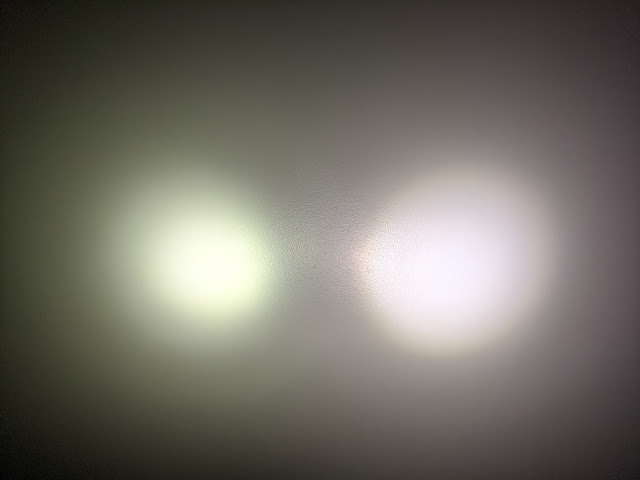 With the same reference you can see that the throw beam has an extremely green tint to it. 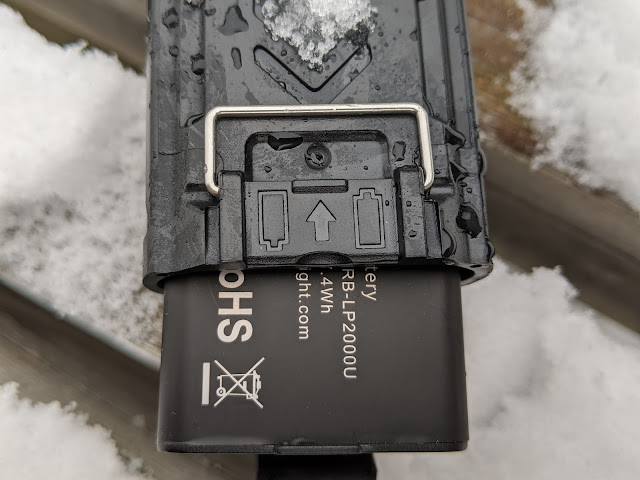 The light can be powered from either the included LiPo cell, or two AA batteries in series. When powered from AA, the high modes can't be accessed. Runtime was tested with both the included cell and two Ikea Ladda NiMH cells.

Output is stable on all tested runs, with a small step-down on the high modes. The runtimes tested about 10% lower than advertised, and the AA runtimes lasted about half the time of the LiPo ones.

The included cell has an integrated micro-USB port for charging. Just plug it in and a red LED tells you it's charging, and changes to blue when it's done.

The charging rate is around 0.8A, and it takes 2.5 hours to complete with termination at 0.1A. 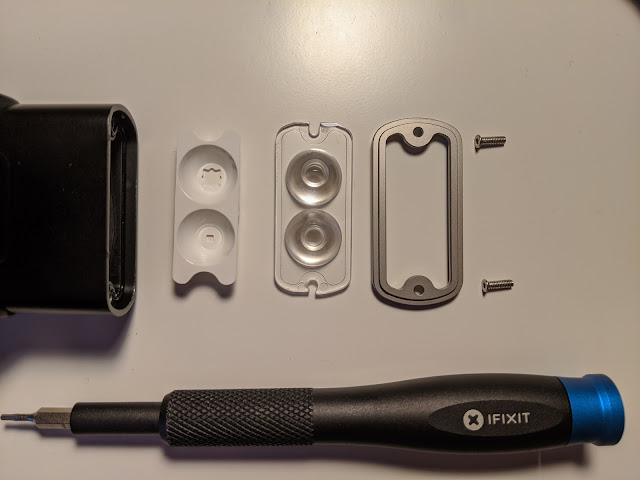 It always bugs me when manufacturers don't tell me what LED they use in their lights, so I had to open this up and find out. Removing the two Torx screws pops off the bezel, followed by the optic and centering rings/optic holder. Both plastic parts are a single piece, which means they are custom molded for this light. Makes me wonder if Fenix is planning on using the same layout in another light of theirs. 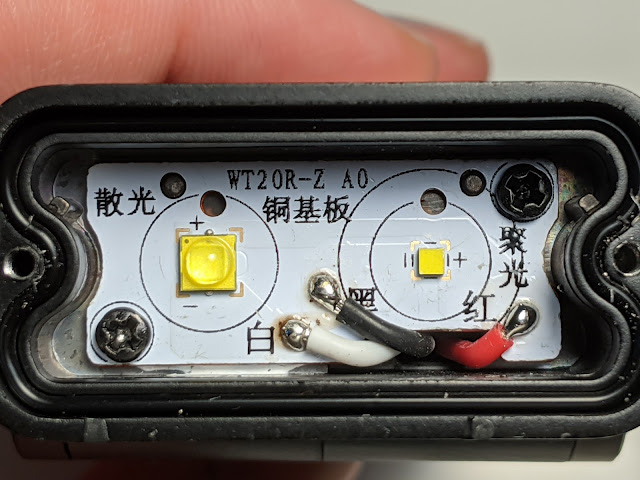 There we go - a peak at the two LEDs so I could identify them. They're both on a single MPCB that's custom made for this light. The head also looks to be cast aluminum, not milled, which is somewhat rare in flashlights.

This product was provided free of charge from Battery Junction. I was not paid to write this review, and have tried to be as unbiased as possible.
Fenix WT20R product listing where you can pick one up for yourself.
2xAA Cree XP-G3 Custom cell Fenix Flashlight Integrated charging Micro USB