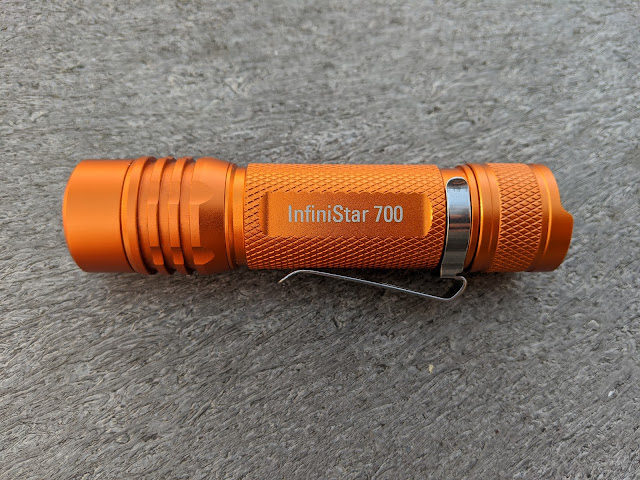 Battery Junction reached out to be recently with interest in sending over a few of their products for review, and this is the first of those - the Lightstar InfiniStar 700. This is a compact single 18650 light with a tail e-switch, and a Nichia 219D emitter. This light is available in the orange body color seen here, as well as a less eye-catching grey.

There's a lot to like about this light at the surface, which is why I requested one to try out - the light has a tail e-switch, a high CRI Nichia LED, and a great orange color option available.
My major issues are that the light requires a long press to turn it off, which I don't like, and the LED it uses doesn't seem to exist in a high CRI version. Aside from these quibbles, the light is superbly compact, comes at a very reasonable price, and looks great. I would prefer a different UI with a lower low mode, but otherwise it's a competitive offering.
It is worth noting that the physical design has enough in common with the Folomov 18650S that I suspect they share a manufacturer. 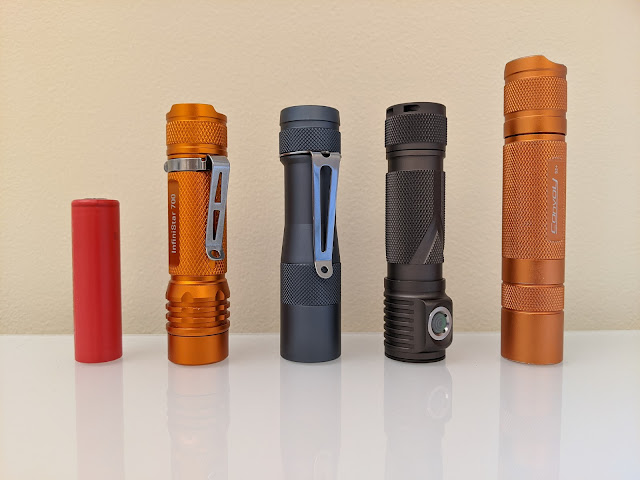 For comparison, here's the light next to an unprotected 18650 cell, the Lumintop FW1A, the YLP Unicorn 1.0, and the Convoy S2+. This is notable head to head with the FW1A, one of the shortest single-LED lights on the market with a tail switch.

The light is made of aluminum with a bright orange anodization. 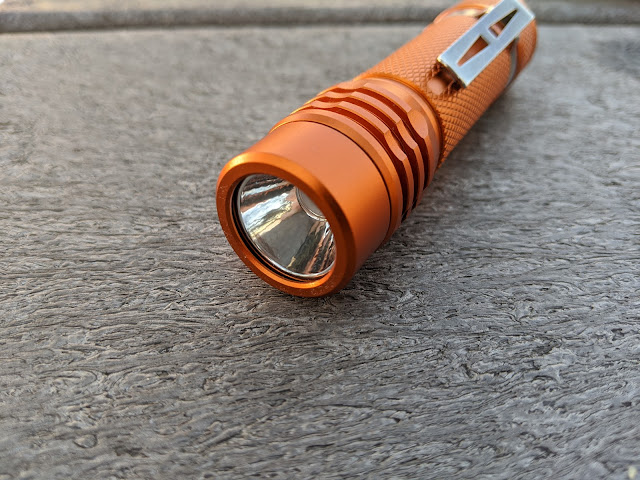 The bezel is smooth and shallow. Behind the bezel, the shallow cooling fins have some notches cut through them along the length of the light to help prevent unwanted rolling. 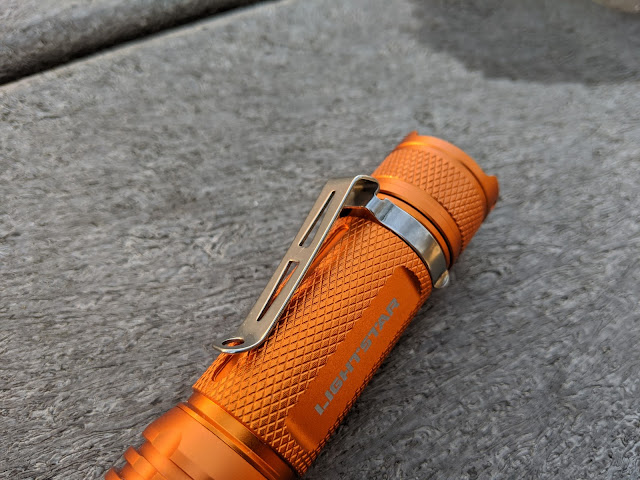 Most of the body and the tail are covered with a flat-topped diamond knurling to help with grip. 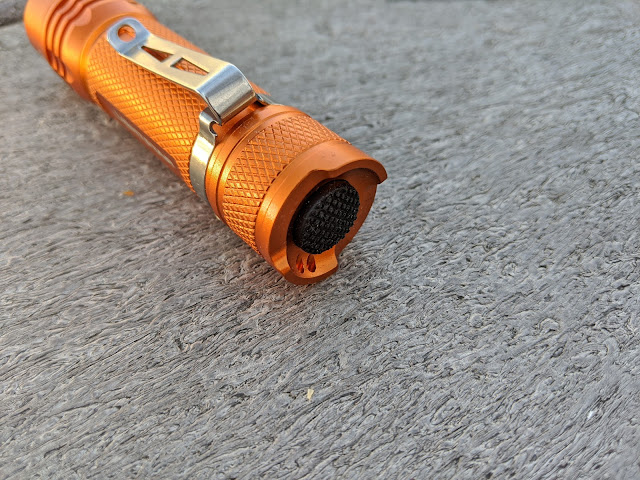 The tail has a silicone boot over the switch, which is recessed to prevent accidental activation. There are holes on one side for the lanyard to attach as well. The raised edges are flat, allowing the light to tail-stand. 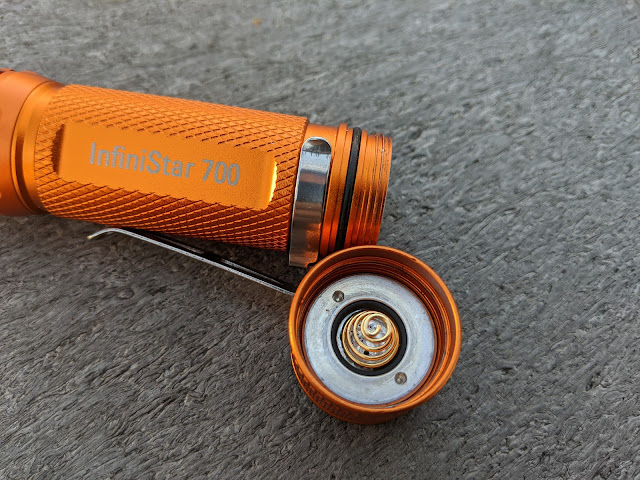 The tail-cap is easily removed for cell swaps. The threads here are anodized, which means you can lock the light out to prevent accidental activation by slightly loosening the tail. A small spring serves as the negative contact. You can see that some of the thin anodization has worn on the threads already, so lockout may not be reliable after extended use. 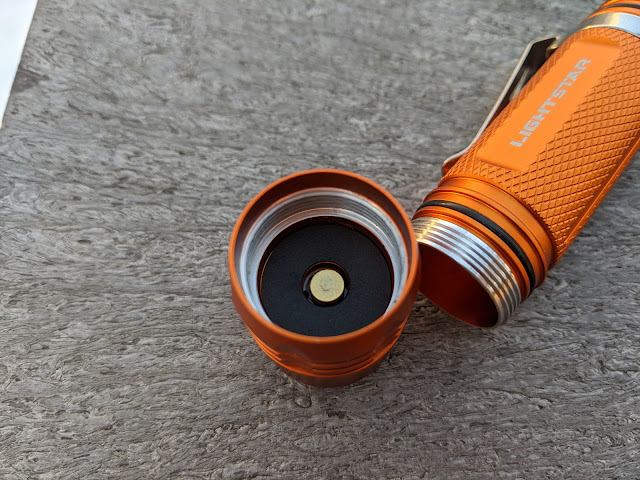 The head can also be removed from the body. The threads here are not anodized, so the cell tube isn't reversible. The positive cell contact is a slightly recessed button. 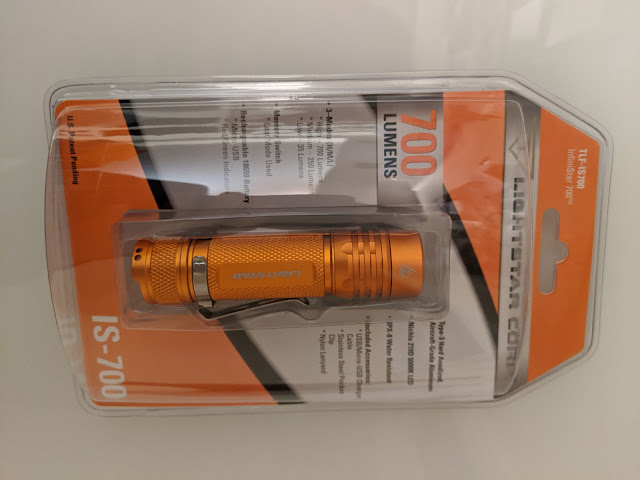 The light comes in a plastic blister pack. Inside, you get: 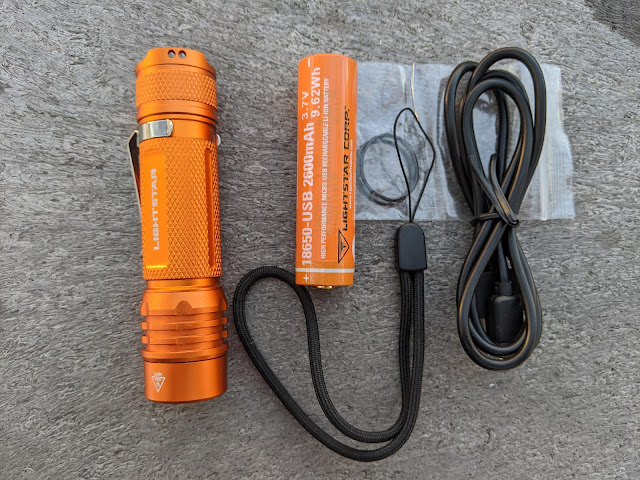 Notably there's no manual included, and one really isn't needed - the instructions on the back of the package go over the simple UI with enough detail.

This small light is quite comfortable in the hand, and the switch being at the tail makes it easy to locate. 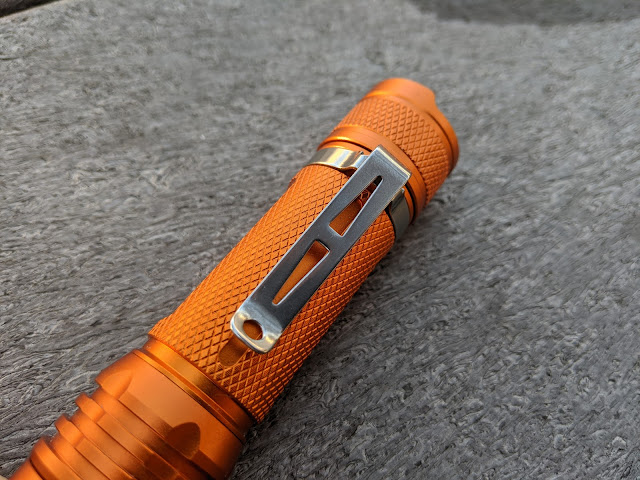 The clip that comes installed only attaches at one point on the light, for head-down carry. It's not a deep-carry clip, but it has a good profile.
The included lanyard can attach to the holes in the tail, and includes a pin to make attachment easier.

All functions of the light are controlled by the tail switch, and the UI is simple.


Many enthusiasts will long for a lower low mode, lockout, or some other added features - but simple UIs are great for many users, and easy to get used to. My only real complaint is that I believe the actions from on should be swapped, so a single press turns the light on and a long press changes modes. 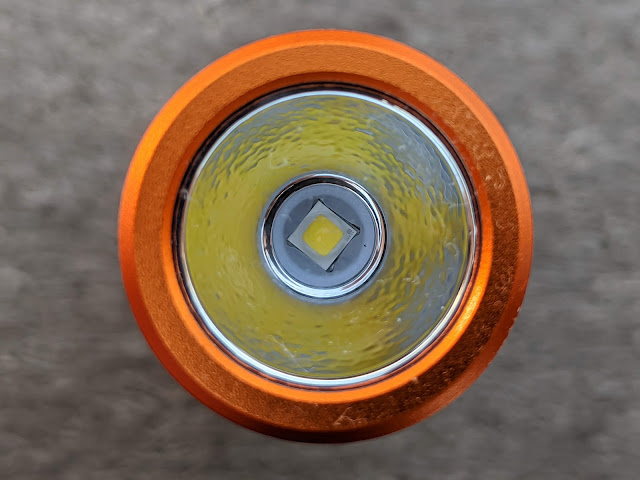 This light uses a Nichia 219D in a reflector with a very faint orange peel texture. LightStar claims this emitter is >90 CRI, but at this time Nichia shows only 70 CRI options available. Based on this, I have to wonder if Lightstar is mistaken about the details of the LED used in this light. 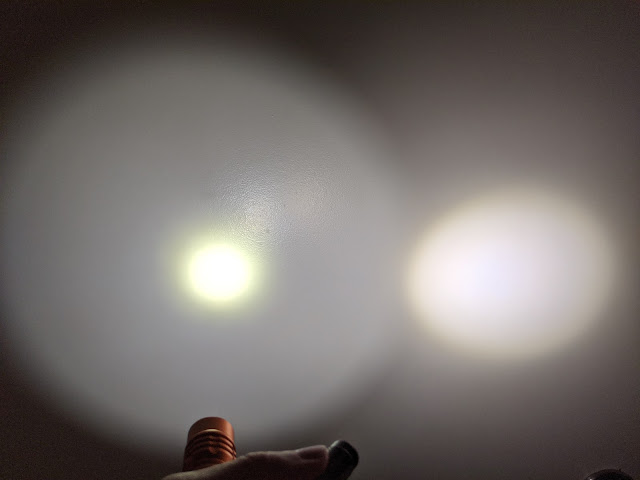 That doesn't mean that the LED is a bad one - the image above shows it throws a surprisingly tight beam. Next to the 4500K E21A on the right, you can see that there isn't a whole lot of tint shift in the light, though the hotspot is a bit yellow compared to the spill.

The light is powered by a single 18650. With the recessed positive contact, a button-top cell is required.

Testing was done both with the included 2600 mAh cell, and with a higher capacity 3400 mAh Titanium Innovations 18650. On high, there's a drastic step down 1 minute into the test down to about 40%, which matches the medium level of the light. Medium also shows a step down, but at around 3 hours.
In all tests, the output tracks down as cell voltage drops. It's notable that, in addition to running for longer on high, the Titanium Innovations cell shows less of a drop in output towards the end of the run. With the included cell, the runtime on high and medium were 3.8 and 6.6 hours, which are notably lower than the manufacturer's 7 and 10 hour claims. 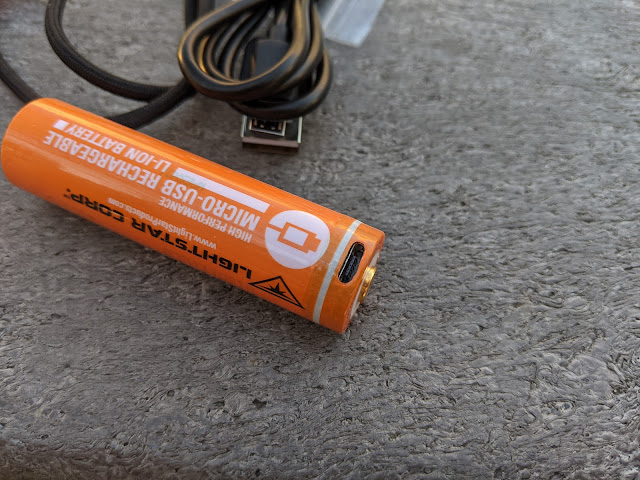 The included cell and the Titanium Innovations one used for testing both feature built in micro-USB charging. As with all cells of this type, just plug in a micro-USB cable after removing the cell and it will charge up. A red LED on the cell indicated it's charging and turns green once complete.
This isn't my favorite form of charging as the cell needs to sit loose and exposed to charge and gets quite warm, but it's inexpensive for manufacturers and convenient for users so we see it quite often.

The included cell charges at 0.7A and takes just under 4.5 hours to charge completely, terminating when the charge current drops below 0.1A.

This product was provided free of charge from Battery Junction. I was not paid to write this review, and have tried to be as unbiased as possible.
InfiniStar 700 product listing where you can pick one up for yourself.
Titanium Innovations 18650, for a higher capacity cell to use.
1x18650 Integrated charging LightStar Micro USB Nichia 219D