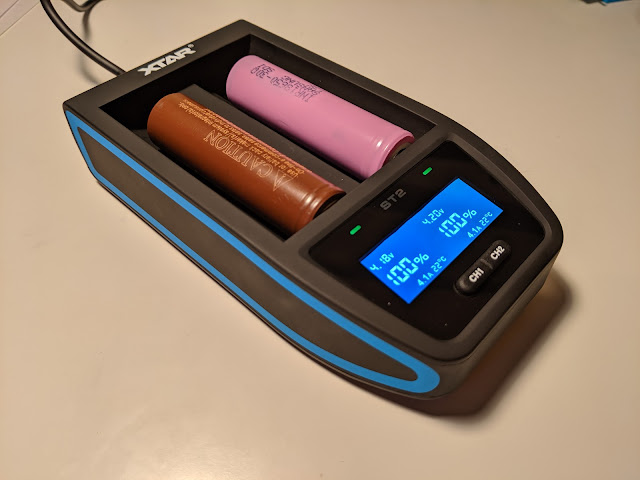 XTAR sent me their newest charger, the ST2. This is a dual-bay charger powered from USB-C that claims up to a 4.2 A charge rate.

This is the first charger I'm aware of that has a USB-C input or charge at over 4 A - and it manages to both of those things well and as advertised. Factor in that it displays actual voltage instead of using a series of LEDs or just a percentage, and it's a compelling offer.
Not everyone needs charging this fast. For the average flashlight enthusiast that reads my site, a slower charger that can handle shorter cells and multiple chemistries is probably a more reasonable option - but if you're vaping or using lights exclusively on turbo and always seem to be waiting on cells to charge up, this is one hell of an upgrade. 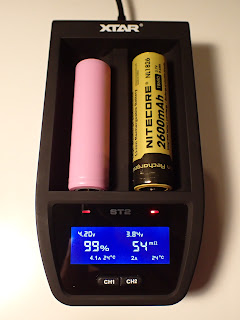 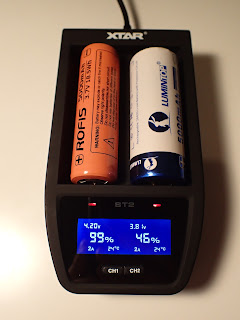 The short travel on the bays means they wont support cells much shorter than 18650, but they have no issues with everything from flat tops, to protected button tops, to even my longest 21700 cells from Rofis.

XTAR chose a soft-touch finish for this charger, along with some sporty blue accents to help it stand out from the rest of the chargers on the market. The finish seems premium, though it does attract fingerprints quite readily. 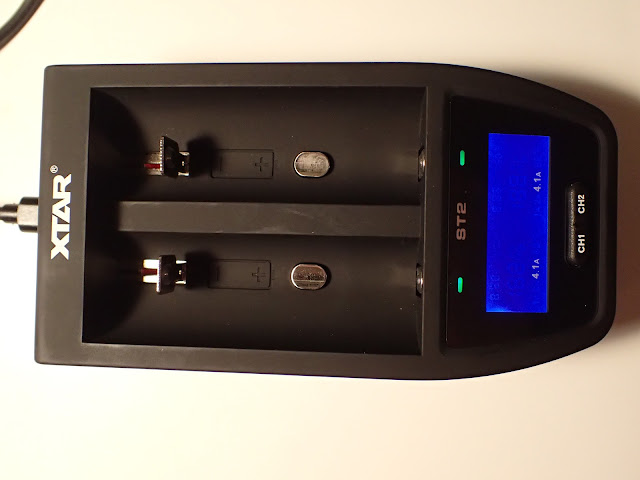 Looking down at the charger, you can see the two bays have polarity indicators molded into them, along with the two spring loaded temperature sensors. Below the bays are the two indicating LEDs, the display, and the two buttons. 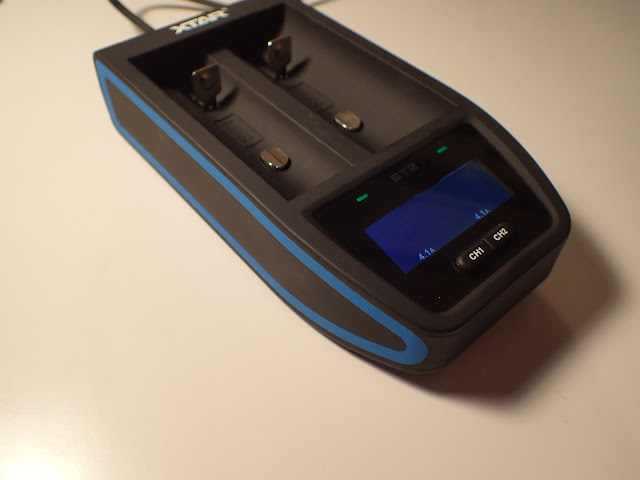 There's nothing noteworthy on the front of the charger, and both sides are the same - bare except for the colored detailing. 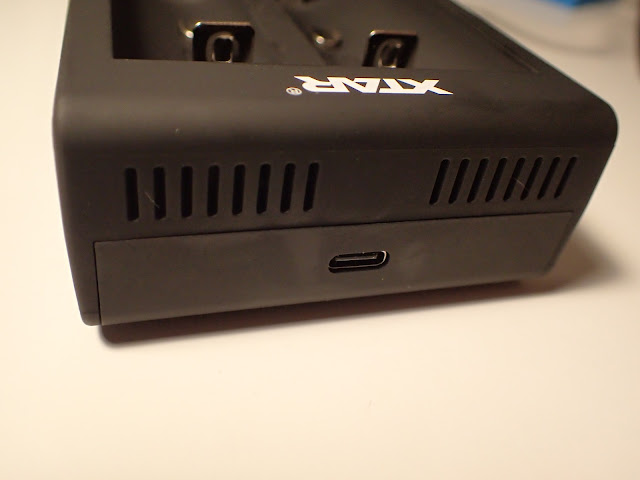 The rear of the charger has two vents for cooling, but note that there is no internal fan. This means operation is silent. In the centre is the USB-C connector used to deliver power to this charger. How exciting! I'm glad more manufacturers are finally making the move to this updated connector. 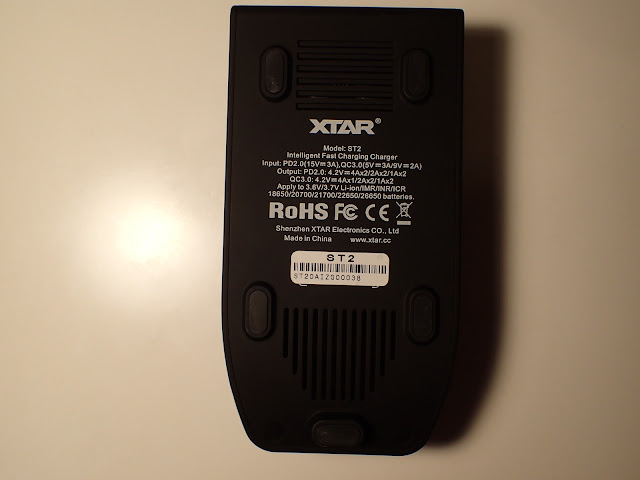 The bottom of the charger sports 5 rubber pads to hold the charger off your desk, keeping it in place. These also help with airflow for the vents located here. The specifications and regulatory information are clearly silkscreened onto the charger. I prefer this over molded, as it makes the smaller text far more legible. 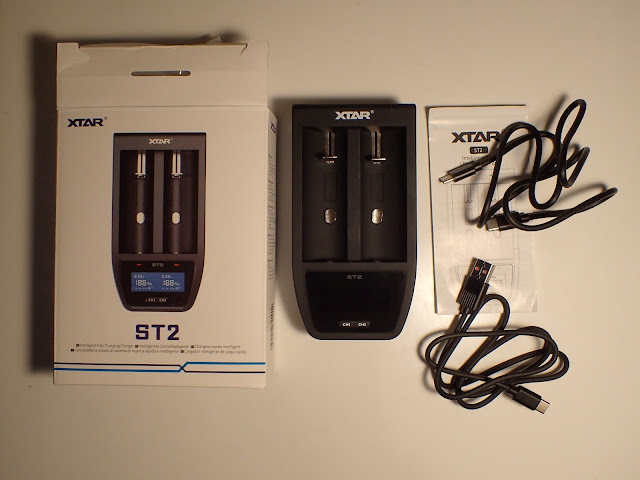 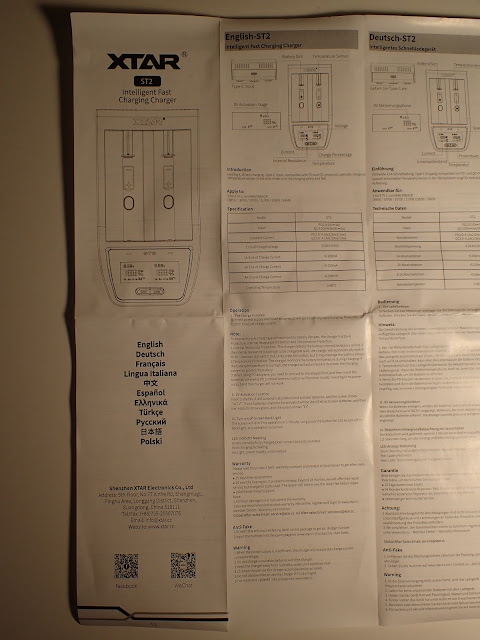 The paperwork is the user manual, which includes a number of languages. 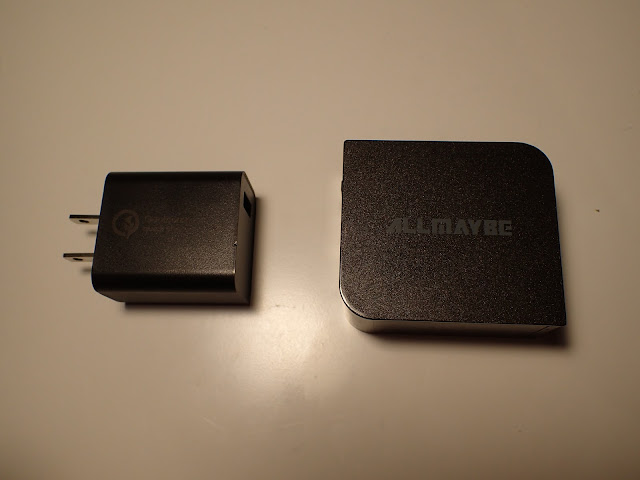 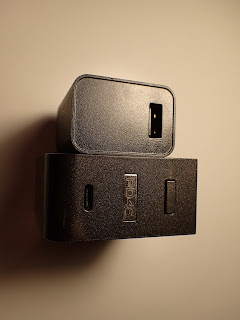 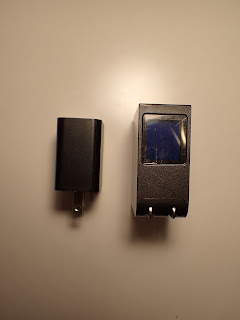 A USB-C PD power supply is needed to get the full performance out of this charger. One isn't included in the box, but XTAR sent along an Allmaybe 18 W QC 3.0 wall adapter and PD45 USB-C power supply for my testing. I believe these are both available as add-ons, depending on where you choose to purchase. 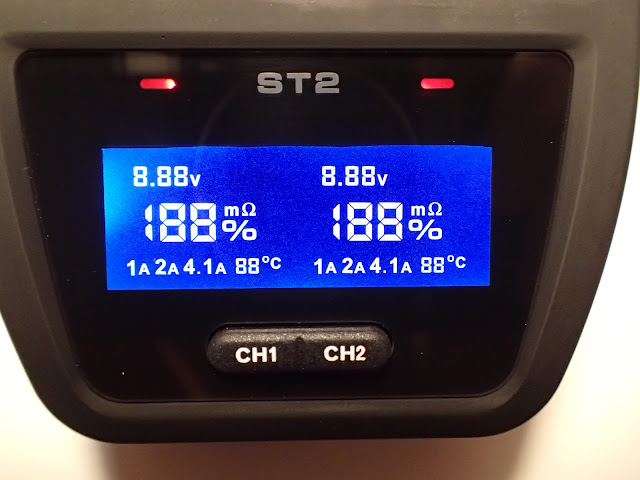 The interface is simple here, as is the case with almost all XTAR chargers I've sampled. Put a cell in and it will start charging. The button beneath the cell bay will cycle through the available maximum rates of charge - 1, 2, or 4.1 A.
The LED below each bay is red while charging, and green while ready or charging is complete.
When a cell is first installed, the internal resistance is shown. After that, the charger shows the percent charge, cell voltage, maximum charge rate, and cell temperature. In my testing, the termination voltage would sometimes be displayed instead of the current cell voltage, but that seemed intermittent. Also note that the current shown is the maximum the cell is set to, and does not indicate the rate at that time. 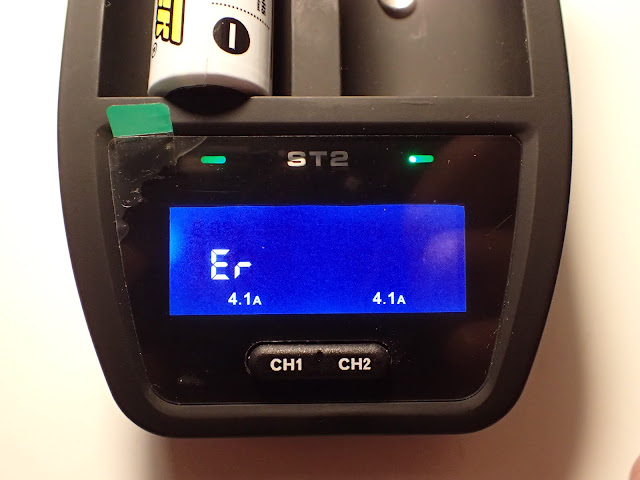 Putting a cell in the wrong direction will show "Er" on the display. Connecting the power to the charger with cells inserted will not do anything until they're removed and re-inserted.

This is the first I've heard of a charger claiming to charge a cell at 4.1 A - so can it pull it off? All charging measurements below were recorded with version 2.0 of my charger measurement setup, or a slightly modified version of it.

Apparently it can. A 30Q in bay 1 charged at over 4.1 A for over 10 minutes before starting to slow down. That might not sound like a long time, but it's more than enough to jump start the charge time. The charger seems to go to a phase of linear reduction of current for a bit, perhaps due to temperature, before finishing with a constant voltage charge. Termination is good, but the charger does pretend it's finished before the last little bit is complete. You don't gain much capacity past this point, and since this charger is really aimed at getting back up and running as soon as possible this isn't a tragedy, but I'd prefer if the display matched reality.
A couple notes here, since I'm sure everyone is asking:
Is it safe to charge a cell this fast? Probably. As long as it's a genuine, high quality cell, the safety steps this charger takes of measuring the internal resistance and monitoring the temperature are good precautions. That being said, I would definitely not want to try this with a cell from an untrustworthy source, and the usual safety tips should be followed.
Is it a good idea to charge a cell this fast? High rates of charge or discharge are harder on the cell, and will decrease the lifespan over time - there's no denying that. Again, making sure it doesn't get too warm while charging helps that, but there's still some wear and tear here. If you need to get back up as soon as possible and want to reduce downtime, it's probably worth it! This certainly applies for vapers, people using lights for work, and nuts like me that review lights and don't always have enough charged cells available. If you're just using an EDC light and it needs charging, a slower rate will probably be fine and will help your cells last a bit longer.

Setting the charge rate to 2 amps shows a more typical CC-CV curve. My monitoring setup turned off unfortunately, but I can confirm that the charger indicated charging was done long before current stopped flowing into the cell, just like the previous test. As with the first test, you can see that QC was used from the lower USB current - the charger can pull that off because the USB voltage was higher. 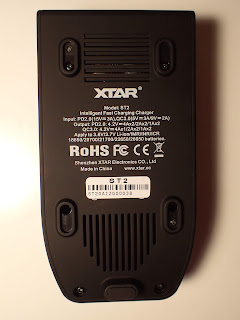 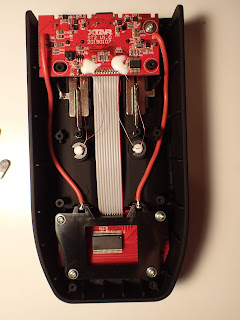 By popping off the rubber pads, I was able to open up the back of the charger. We can see some thick leads carrying the charge current, as well as some very thin sense wires for the temperature sensors. The ribbon cable is used to bring signals to the LEDs and display, and back to the main board from the buttons. 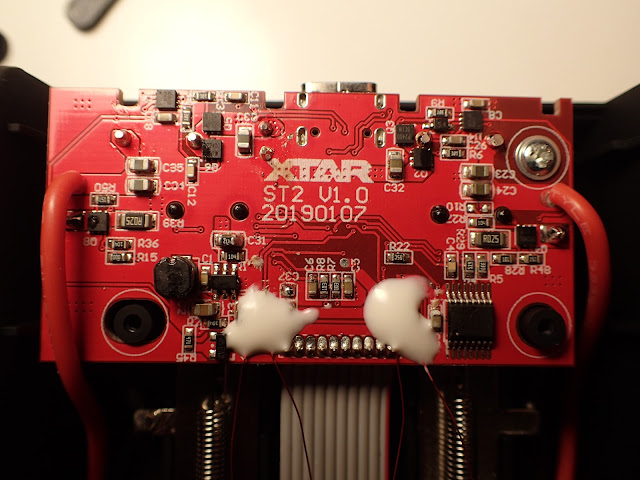 The main board has some nice globs of conformal coating to keep the sense wires secure. There's a bit of flux residue on the XTAR labeling, but otherwise it looks clean and well soldered. The R10 slot appears to be unpopulated. I'm glad the board is secured with a screw into the frame, which should help keep it steady when the cable is inserted or removed. 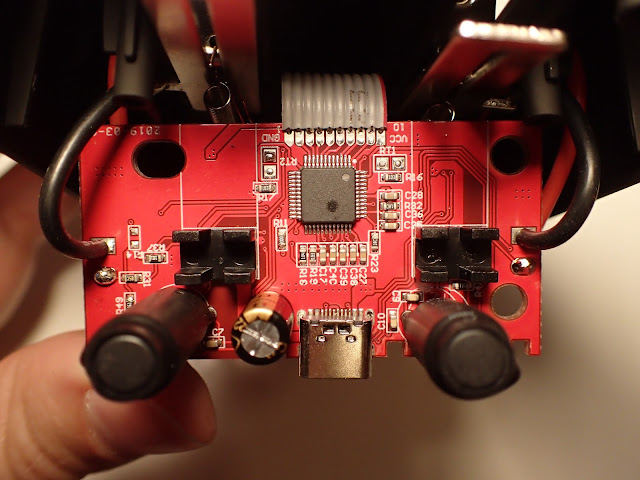 More of the same on the reverse side. The three large components are likely to manage the fast charging, and the two plastic parts brace the board against the rails. On this side the R14 slot appears to be empty. 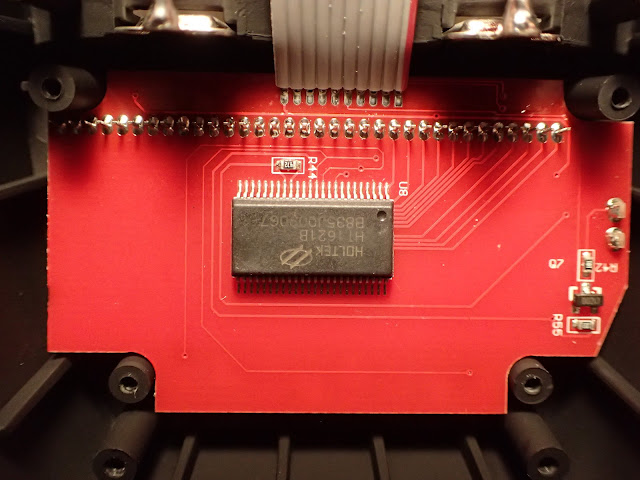 Finally, the daughter board at the bottom of the charger has just a few components on this side, most notably the Holtek HT1621 display controller. 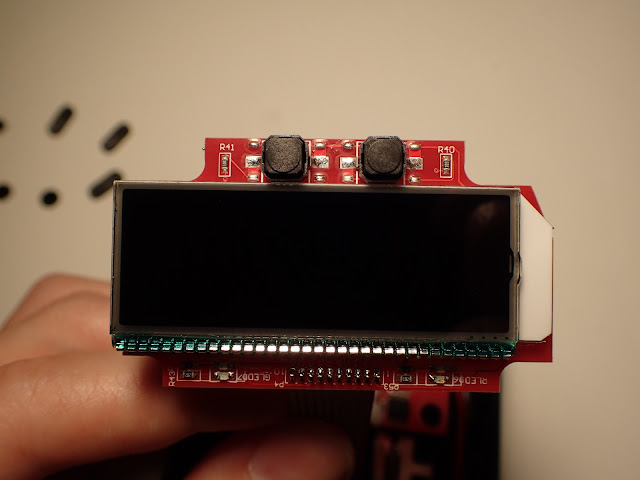 And the opposite side of this board has a few components, the indicator LEDs, and the switches. The LCD takes up most of this board.

This product was provided free of charge from the manufacturer. I was not paid to write this review, and have tried to be as unbiased as possible.
Manufacturer's product page
2 bay Charger USB-C XTAR