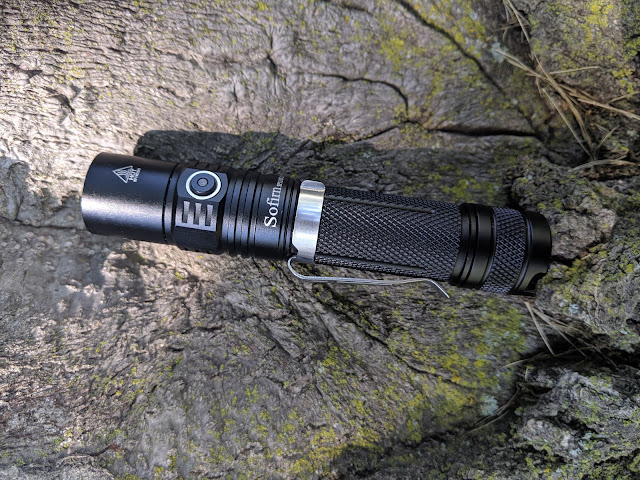 Sofirn sent me their SP32A V2.0 light to review. This is an 18650 tube light controlled with a single side switch, and probably one of their more popular lights.

This is an amazingly impressive light. For the price, it gets you a complete kit - a high capacity cell, a charger, and a great flashlight. That's pretty hard to beat! I wish the light was a bit more compact - but this is nitpicking. This light easily competes with others that cost 3 times as much, and don't come with a charger or a battery. 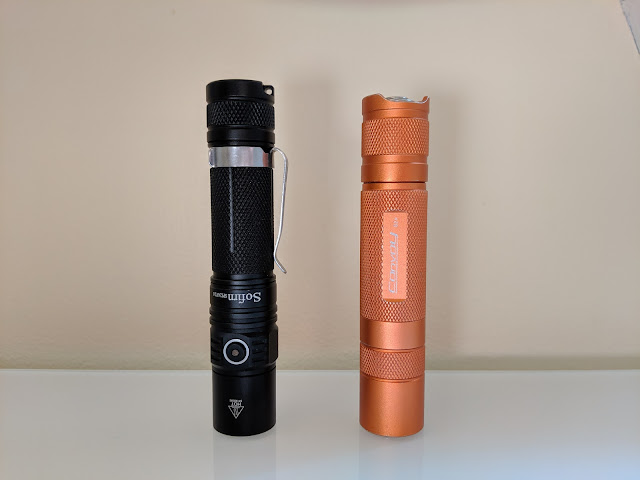 Next to the S2+, you can see that the SP32A is quite long - especially considering it doesn't need the extra room for a tailswitch.

Like most, this light is made of aluminum with black anodization. The anodizing on my sample seems even across the light, and there weren't any defects when I got it. 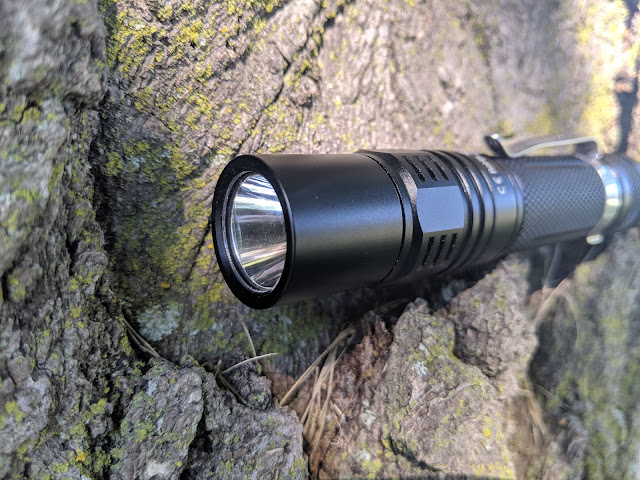 The head of the light has a smooth bezel, free of crenelations. 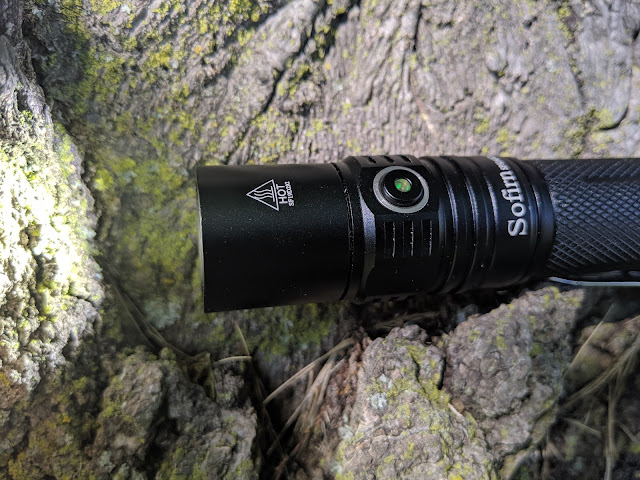 Behind the bezel, a wider portion houses the switch. The switch has red and green indicating LEDs beneath it, and protrudes from the body of the light. There are also a few shallow fins cut into the light. 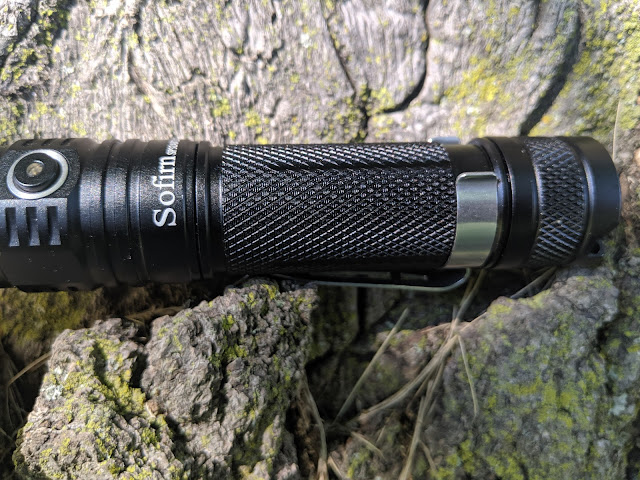 The body tube is covered in flat, diamond shaped knurling that has a great grip to it. There's a groove towards the tail for the pocket clip. 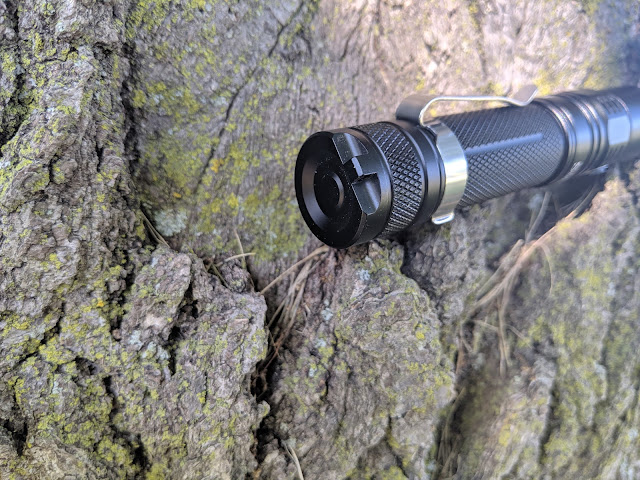 The tail of the light has more of the same knurling, making it easier to unscrew for cell changes. The tail is flat, so the light can tail stand without issues. There's a hole for a lanyard in the tail as well. 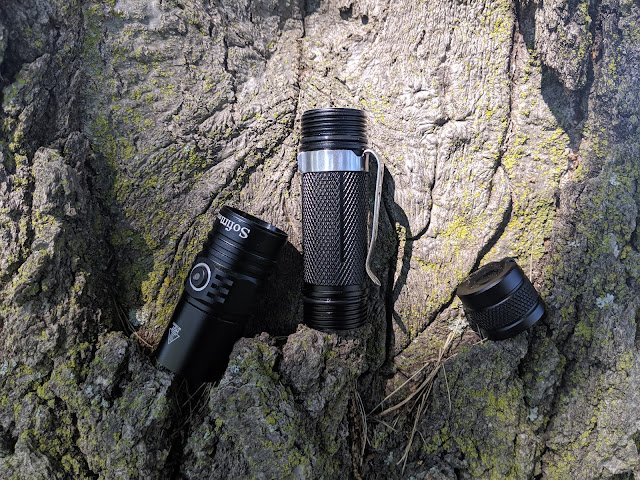 The light unscrews easily at both ends of the cell tube. The tube is reversible, as both ends use the same anodized and square cut threads. The light can be locked out to prevent accidental activation by slightly loosening either the head or the tail. 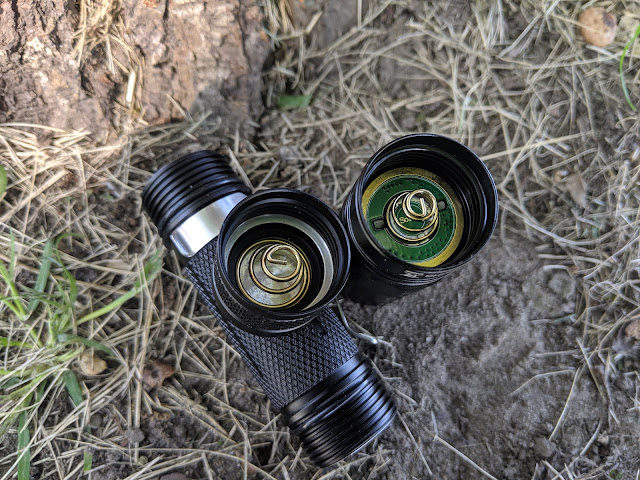 Both ends also have a spring to make contact with the cell, meaning flat top cells will work without issue in this light. 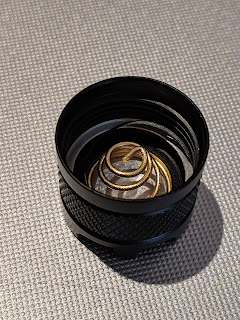 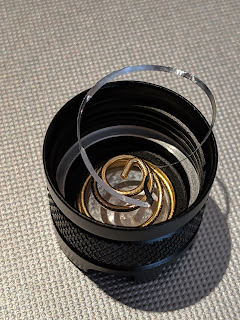 When I received my sample, there was a small shaving left in the tail that prevented the light from locking out. It was easy enough to find the issue, and there's no real risk to this part being here, but hopefully this doesn't happen too frequently. 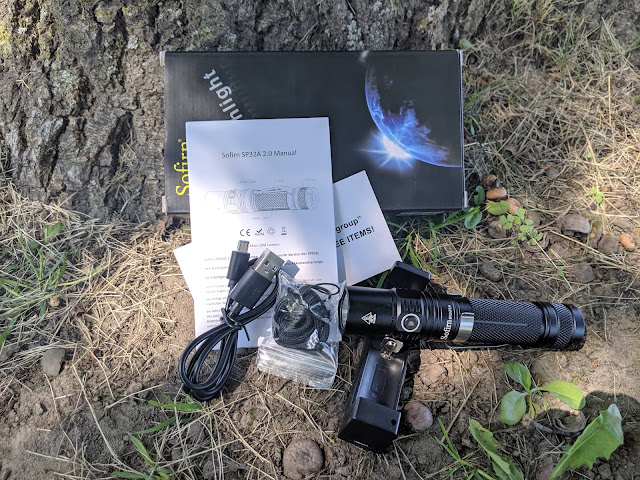 Inside the box, you'll find: 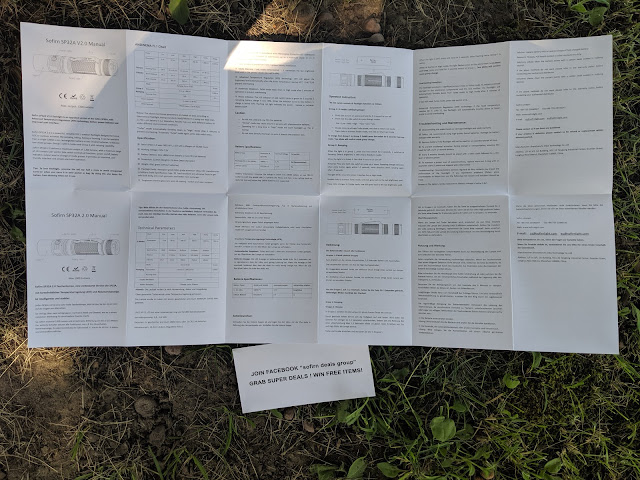 The paperwork in this case is a social card and the rather extensive user manual. 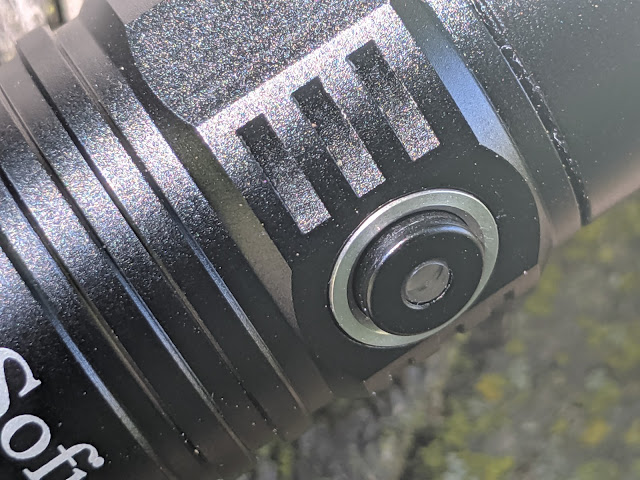 The standard tube light form factor is comfortable, and the button placement is good. The protruding switch is easy to locate, but it does make itself prone to accidental presses when it's in a pocket. 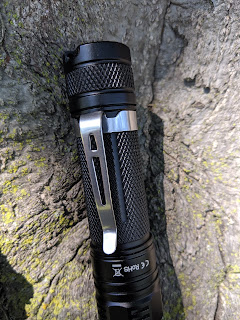 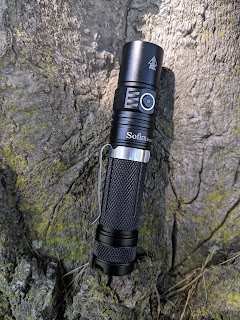 The main method of attachment included with the light is the friction-fit pocket clip. When you get the light, the clip is installed for head-down carry. It's not a particularly deep carry clip, and will leave the tail exposed. If you prefer head-up carry, the cell tube can be reversed - but that will leave the entire head above the clip. 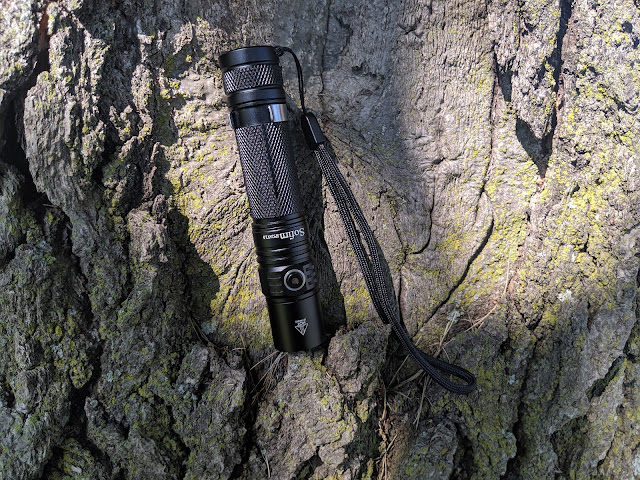 A standard lanyard is also included, which attaches at the tail. 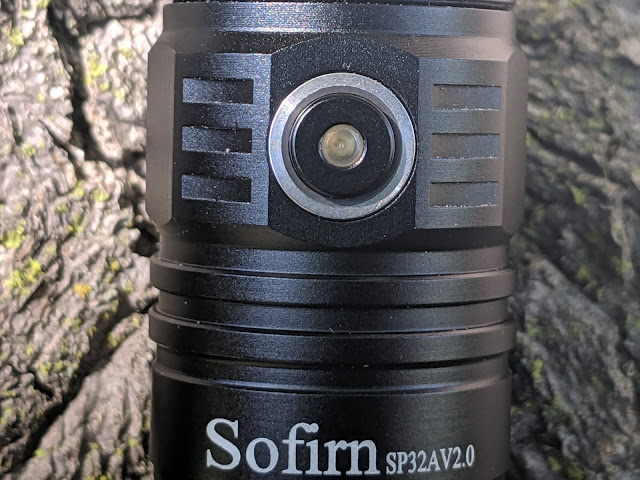 This light has two separate interfaces that can be toggled by holding the switch while on. The first UI works as follows:

The modes in this group are
The second mode group is ramping,. In this group:

The first UI is not for me - I'm not a fan of long press to turn off a light. The second mode, however, is pretty great. You can pick any brightness level you want, ramp up or down, and have a shortcut to turbo. I wish there was a shortcut to low from off as well, but overall it's good. 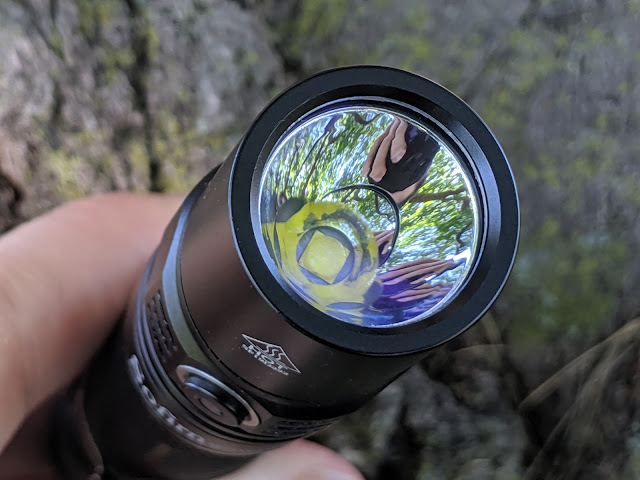 This light uses a cool white Cree XP-L2 in a smooth reflector. This LED is known for it's efficiency, but the beam it produces isn't my favorite. It's plenty functional, and very bright - but a textured reflector, warmer CCT, or a different LED could certainly produce a more pleasant beam. 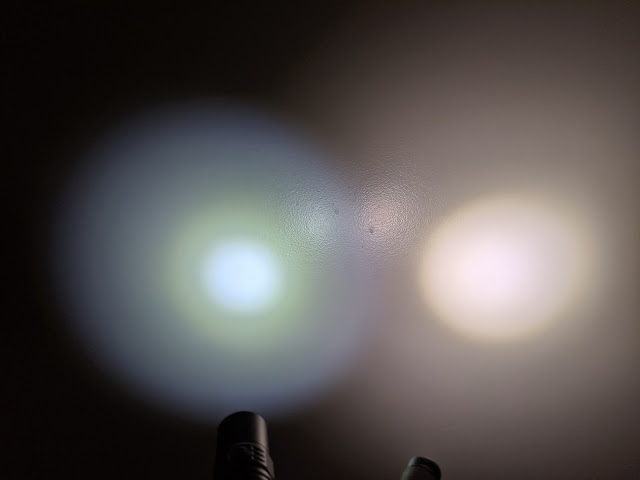 Next to a 4500K Nichia E21A JetBeam Jetu, you can see that the beam is cooler and has some more tint shift from hotspot to spill.

The runtime on high was cut off a bit early, but it's clear that the stepdowns are the same as turbo without the initial burst. At 3 minutes the light has a drastic step down to about 40%, but it stays there steadily for most of the test. There's another stepdown about 2 hours in, and a few more towards the end. The test was stopped when the light was still dimly on - it didn't turn itself off.

This light doesn't have built in charging, but Sofirn includes a single bay charger with the kit.

We can see that there's a very short CC phase, followed by a long CV phase. The cell takes just under 8 hours to charge completely, and has a linear regulator to burn off excess voltage from the USB power source. Overall this is a good charger, and I'm very glad to see Sofirn including it here. Not only does that complete the kit, it's a much better solution than those cells with integrated charging on them.

This product was provided free of charge from Sofirn. I was not paid to write this review, and have tried to be as unbiased as possible.
Sofirn provided a link where my fellow Canadians can purchase this light on Amazon.ca
Zeroair's review
Virisenox' review
1x18650 Cree XP-L2 Flashlight Sofirn