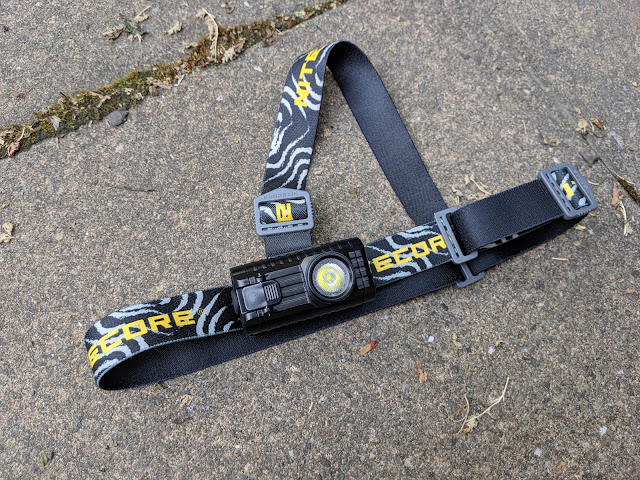 Illumn knows how much I love headlamps, so they sent over the new Nitecore HA23 for me to take a look at. This is a plastic bodied headlamp powered by two AA cells.

This headlamp is an interesting offering - in fact, it's the switch that makes it most interesting to me. This is one of the only enthusiast-brand headlamps I'm aware of that uses a mechanical switch, and it's certainly the only one I own. That means you can take it on a camping trip and leave it in your bag until next year, or leave it hanging by your door until the next power outage, and there's no reason for the cells to die on you. That also means the UI is quite limited, and not as flexible as I'd prefer - but the 3 modes available are versatile enough for finding your way around a campsite.
The plastic construction certainly isn't as high quality as milled aluminum, but it is light weight - that combined with the readily available AA cells it uses make this a great back up, gift, loaner, or headlamp for the kids. I'll admit that it isn't convincing enough to be worth the weight savings over a more powerful 18650 headlamp for me, and I don't think the light weight frame shaves enough grams to sell the ultralight camping crowd, but I like it as a back-up, and I think the price is fair.
My one major complaint is that the cool white LED is one of the harshest I've seen lately, and there doesn't look to be any easy way to fix that.

It's hard to measure a dedicated headlamp, but the body itself is 71.4 mm wide (excluding the switch), 39.9 mm tall, and 29.8 mm thick. The body weighs 37 grams, 83 g with the headband, and a trail weight of 130 grams with the included alkaline cells - though, as always, I would highly suggest using different cells, and AA weight can vary greatly depending on the chemistry. 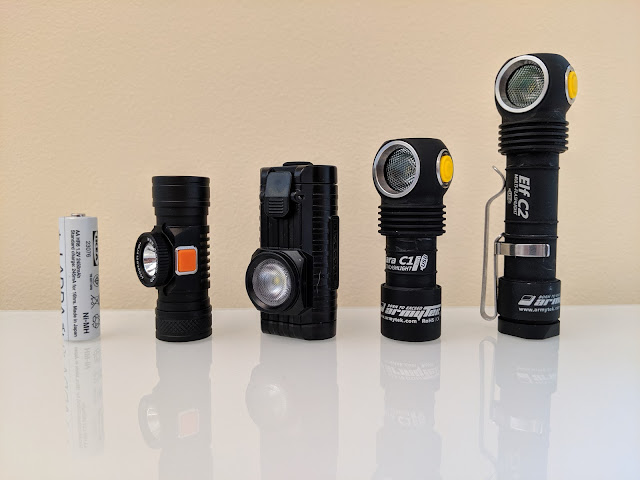 Here's a lineup to put the size into perspective, showing the HA23 next to an AA cell, the Acebeam H40, Armytek Tiara C1 Pro, and Elf C2.

Most of these pictures show the headlight removed from the headband, though that obviously isn't how you'll use it in most cases. 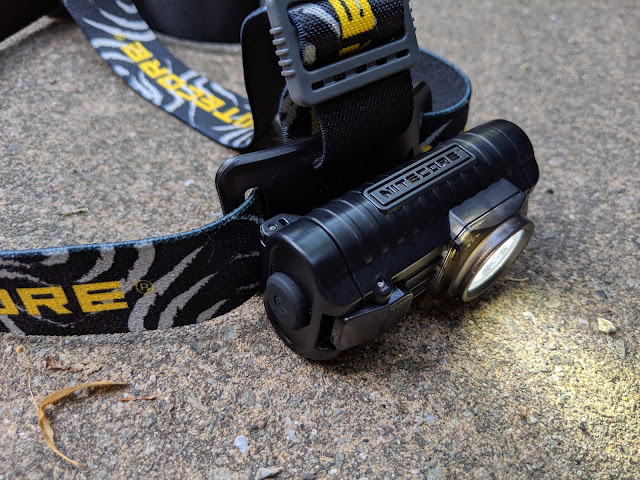 The entire light is made of a slightly translucent polycarbonate - you can actually see some light bleeding through the body when it's on. Most of the construction seems to be ultrasonically welded or glued shut. One way or another, the internals of the light certainly aren't designed to be user serviceable. 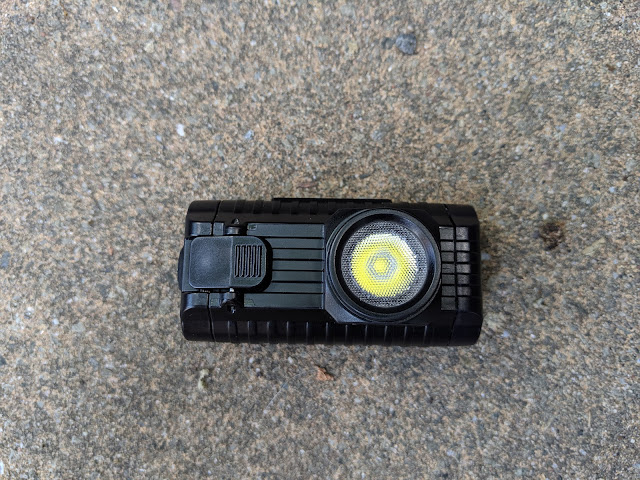 From the front of the light, we can see the large dimpled TIR lens to the left and the clip holding the cell compartment on the right. 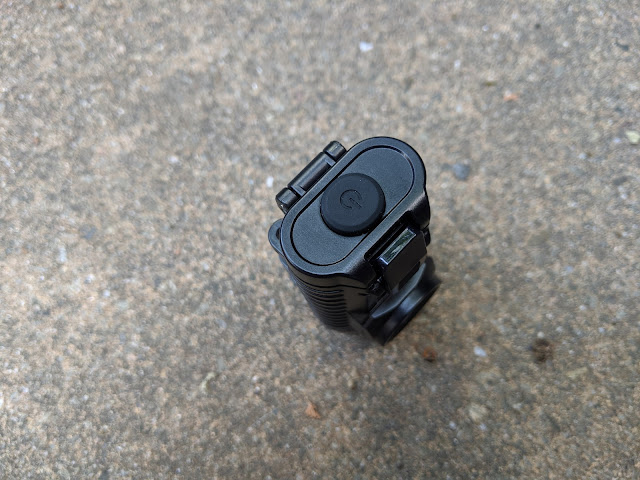 On the right hand side of the light, there's a switch boot covering the only button on this light. Unlike most headlights, this one is actually controlled with a mechanical reverse-clicky switch - more on that later. 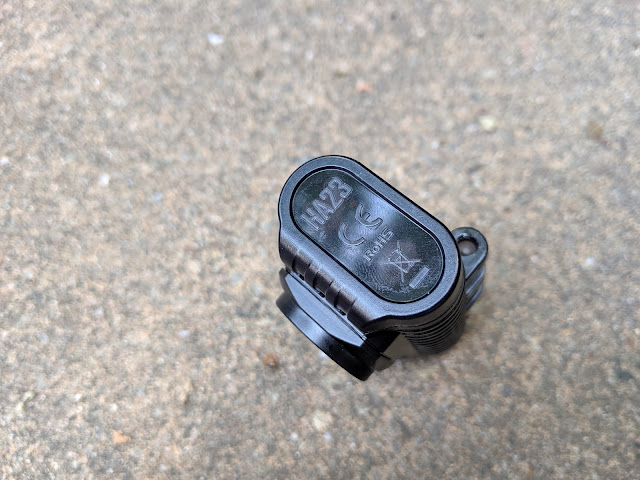 Opposite the switch, the left side has the product name molded into the plastic and a few of the standard regulatory labels. The light can balance on this flat end, so I guess I'll count that as being able to 'tail stand'. Depending on the lighting, you can actually see through this end and get a peek at the driver below the plastic. 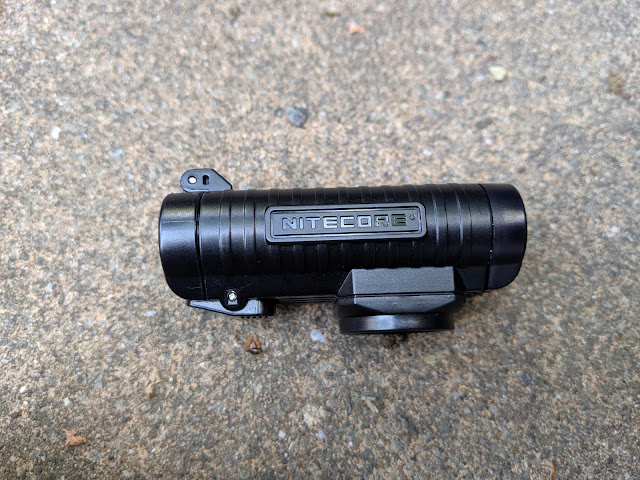 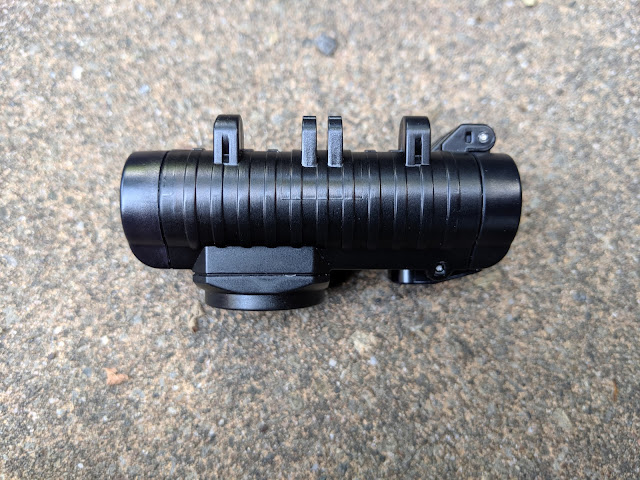 The top and bottom of the light don't have any notable features, though the top does have the brand name shown. 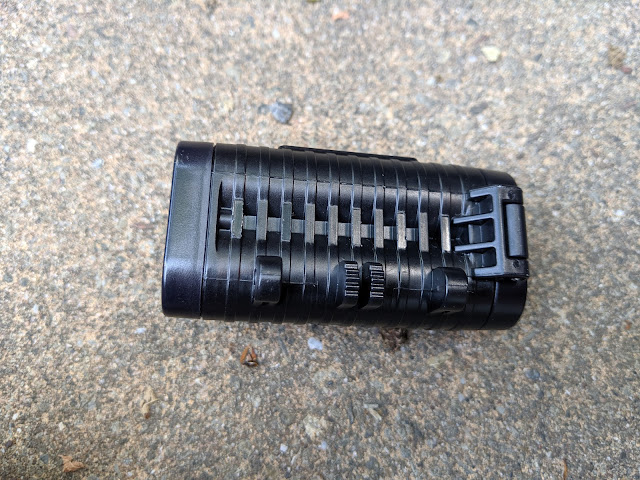 The back of the light is has the hinge and ratchet for the headband attachment, as well as the hinge for the battery compartment. 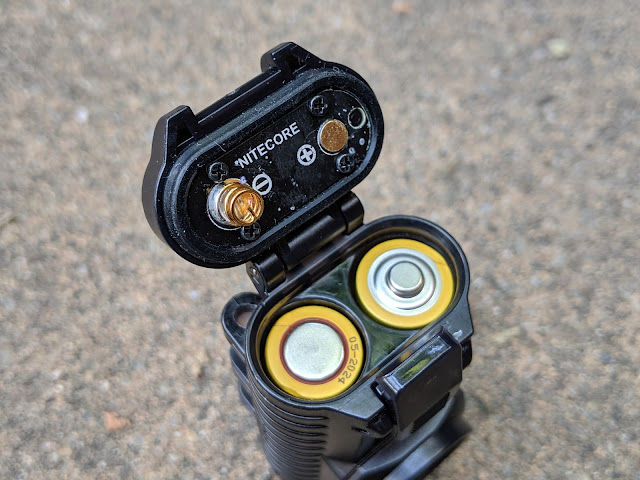 Opening the cell door reveals a brass button for the positive cell contact, and a small spring for the negative one. The screws holding this board in place act as a form of physical reverse polarity protection, preventing you from installing batteries the wrong way. There's a rubber gasket around the lid, which should help with water resistance. 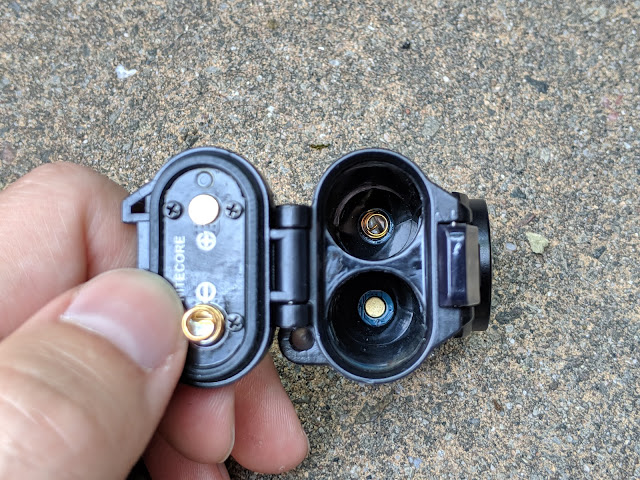 Looking down the cell tubes show the same terminals at the opposite end. The welded or glued construction means there's no easy way to get a closer look at the rest of the internals. 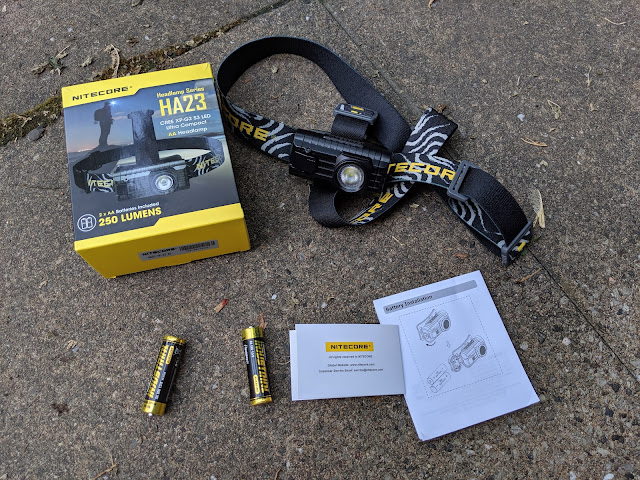 The light ships in Nitecore's usual black and yellow packaging, with a plastic insert to hold all the bits in place. Inside, you'll get: 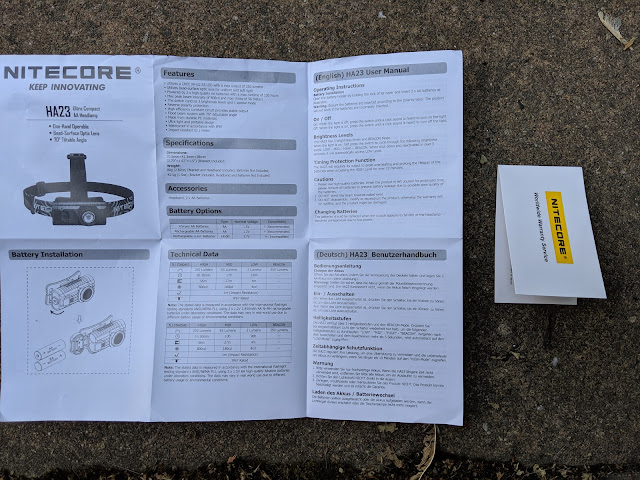 The paperwork consists of a warranty card and a descriptive user manual, with instructions in 9 languages.

As pictured above, this light can be removed from the headband, but it's really not intended to be used that way. There are no other included mechanisms of hanging on to the light. 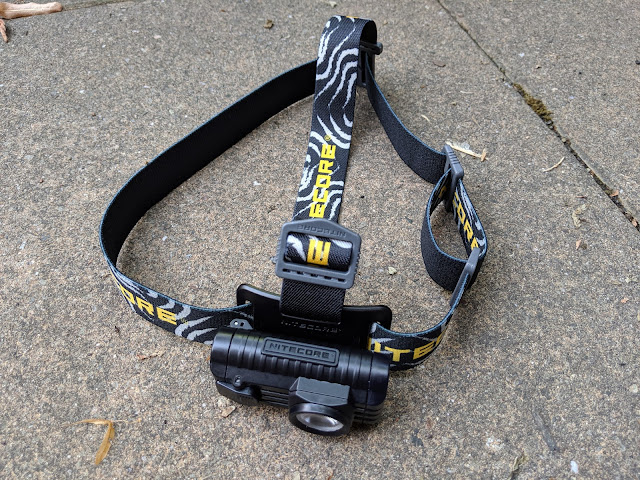 The included headband has three straps. I was initially surprised by this, considering how light weight it is, but this does give some extra stability. I prefer this style anyways, but if you don't I'm quite sure it would still be stable with the top band removed. 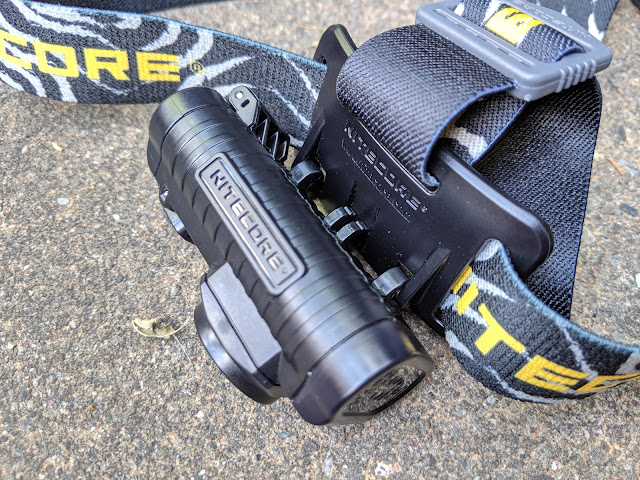 The included mount lets you angle the light as needed. I'm not sure how well the plastic ratcheting mechanism used for angle adjustment will stand up to extended use and abuse, but I didn't see any issues in my short time with the light. 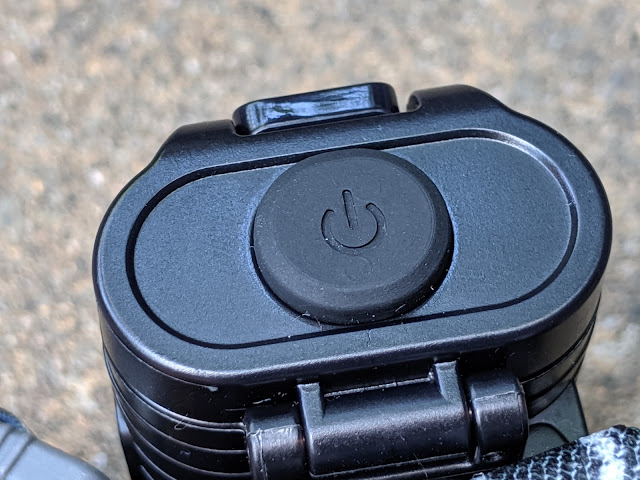 The modes are all controlled by the reverse clicky switch on the right side of the light. All other headlamps I own use an electronic switch, so this is interesting to see. The mechanical switch means there's no long press actions or shortcuts in the UI, and simplifies it a fair bit - but it also means there's absolutely no standby drain while the light isn't in use. That's a huge benefit for anyone who plans to keep the light stashed away in storage or in a glovebox ready for an emergency.
The UI is as follows

That's it. It's a simple UI, and I quite like that it starts on low every time. I wish there was a way to get from high to a lower mode without stepping through strobe, but it's a reasonable limitation given the type of switch used.
the modes are specified at 2, 65, and 250 lumens. 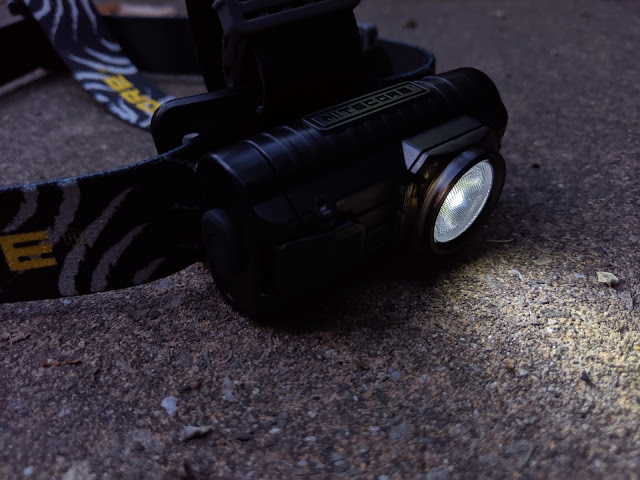 This light uses a cool white XP-G2 behind a dimpled TIR, which gives it a nice even beam pattern. The beam pattern is good, but I find the color temperature to be quite cool. I wish there was a warm white, or even a high CRI option for this one, especially since there's no getting into it to change the LED yourself. 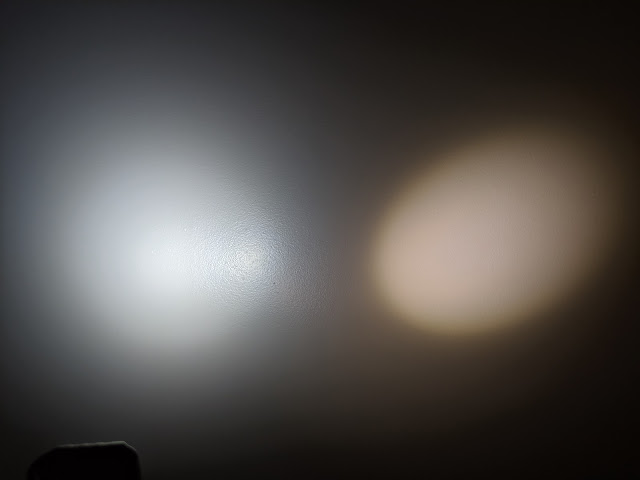 Next to a 4500K E21A, you can see that the light is quite a bit cooler, though the beam is nice and even across.

The light is powered by two AA cells in series - either alkaline or NiMH are supported. As always, I strongly recommend using rechargeable cells.

The runtime on high was tested on both Ikea Ladda cells and the included alkalines. There appears to be a timed step down to 65% at about 15 minutes in, and the output is stable for the rest of the run. Both cell chemistries exceeded the published runtimes.
On medium, the light was tested with rechargeables. The output fades steadily from turn on, settling at 50% after 1.4 hours. From this point it stays stable, lasting a respectable 18 and a half hours - again exceeding manufacturer's claims.
I don't mind timed step downs, as they provide a decent way extend battery life on the highest mode, but I wish there was a way to override this. If not, the manufacturer should at least note the timed step down in their runtime claims. The steady output on medium is great but, again, I'm a bit disappointed by the fading brightness when the light first turns on.