Lumintop has sent me a few lights for review now. Today I have the ODF30C, which is an update to their ODF30. This is a 26650 light with a single XHP70.2 emitter in an OP reflector, and this update added built in micro USB charging. Lumintop has asked that I share a purchase link for this light, which you can save 10% from with the coupon code QCCXY65QQOAF. Lumintop was kind enough to provide me with one of their cells for testing as well, but the light is sold either with or without a 26650. 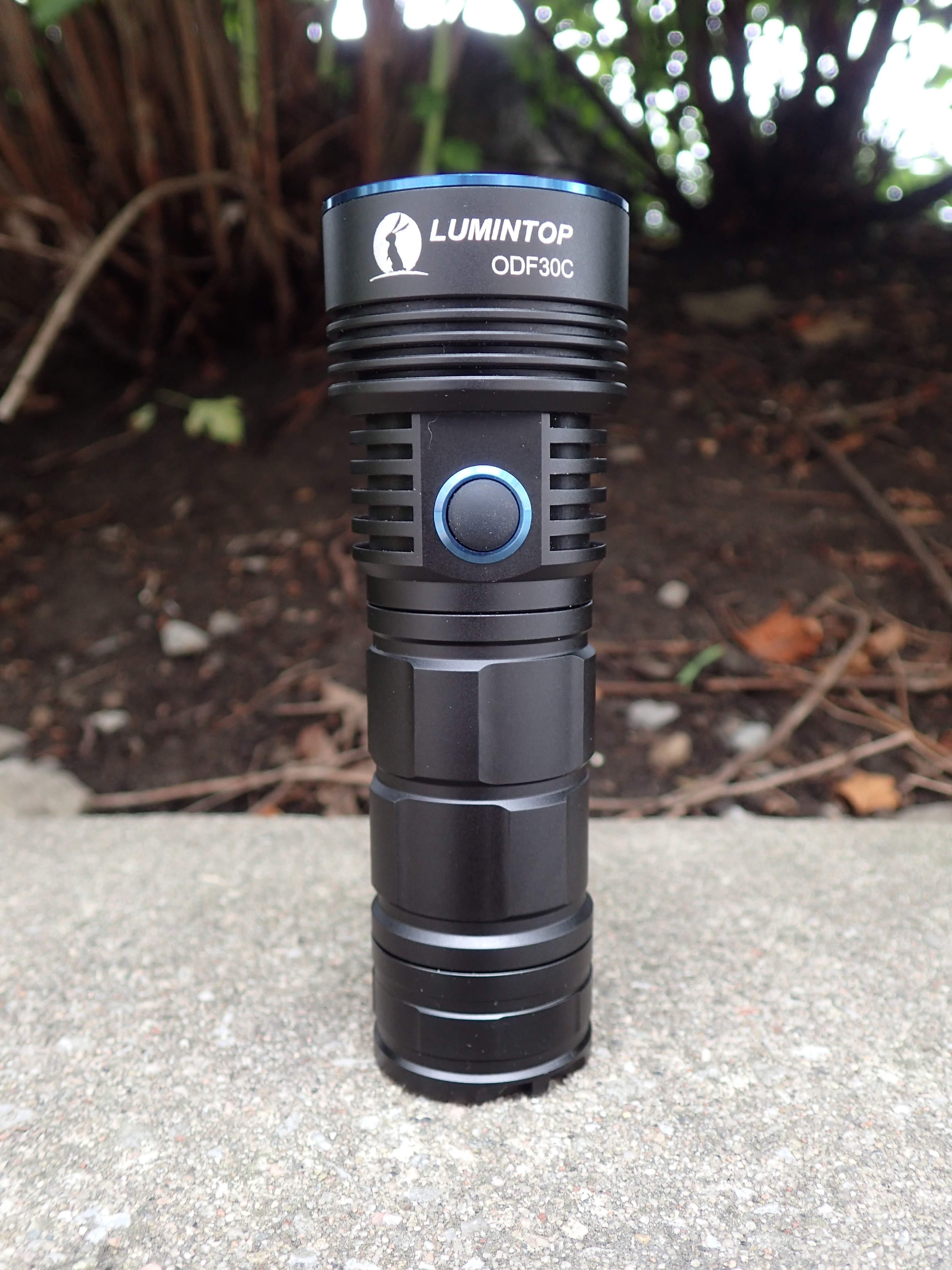 This is my first experience with a 26650 cell light, and I like the form factor. The output is pretty crazy on this light, and the runtimes from the larger cell are great. This is also my first time using an XHP70.2, and I’m not crazy about it. If you aren’t picky about the tint of your light, and you just want a lot of it, this is a great emitter. The UI of this light also has a lot to like, and a few shortcomings. Finally, I have to give Lumintop credit for waterproofing the USB port itself instead of relying on a flimsy rubber flap.

The build quality of this light is great. The blocking along the body is distinctive, and not a style I’ve noticed before on any of my other lights. It’s not as grippy as real knurling, but the girth of this light meant that I didn’t have any issues keeping a good grip on it. The large cell also means that the light is quite heavy - I used it with the lanyard just because this isn’t one I wanted falling on my toes. 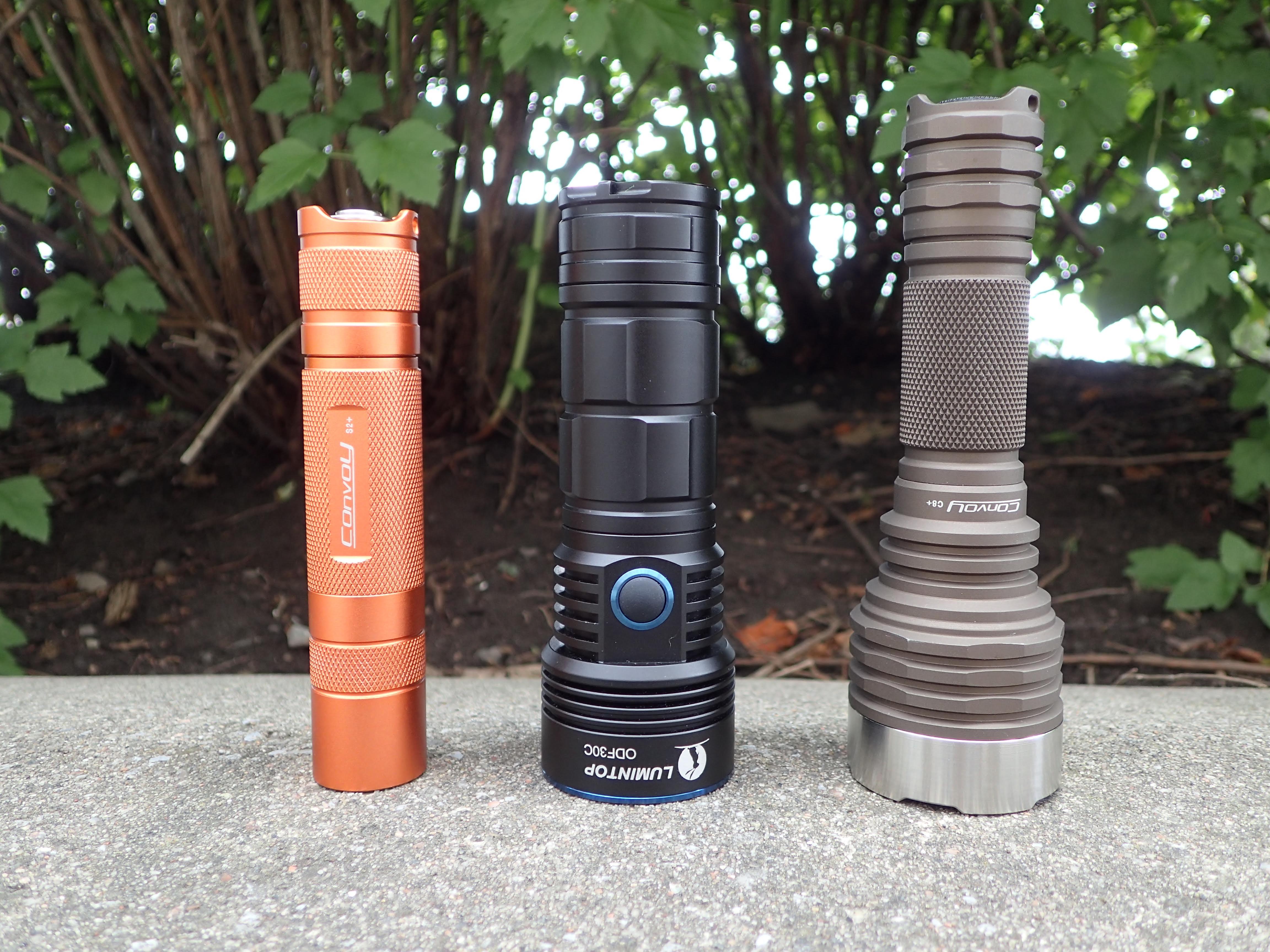 The blue PVD bezel is fit to the front, and I was not able to easily unscrew mine. I really like to see stainless steel bezels on lights, so this is a great touch. 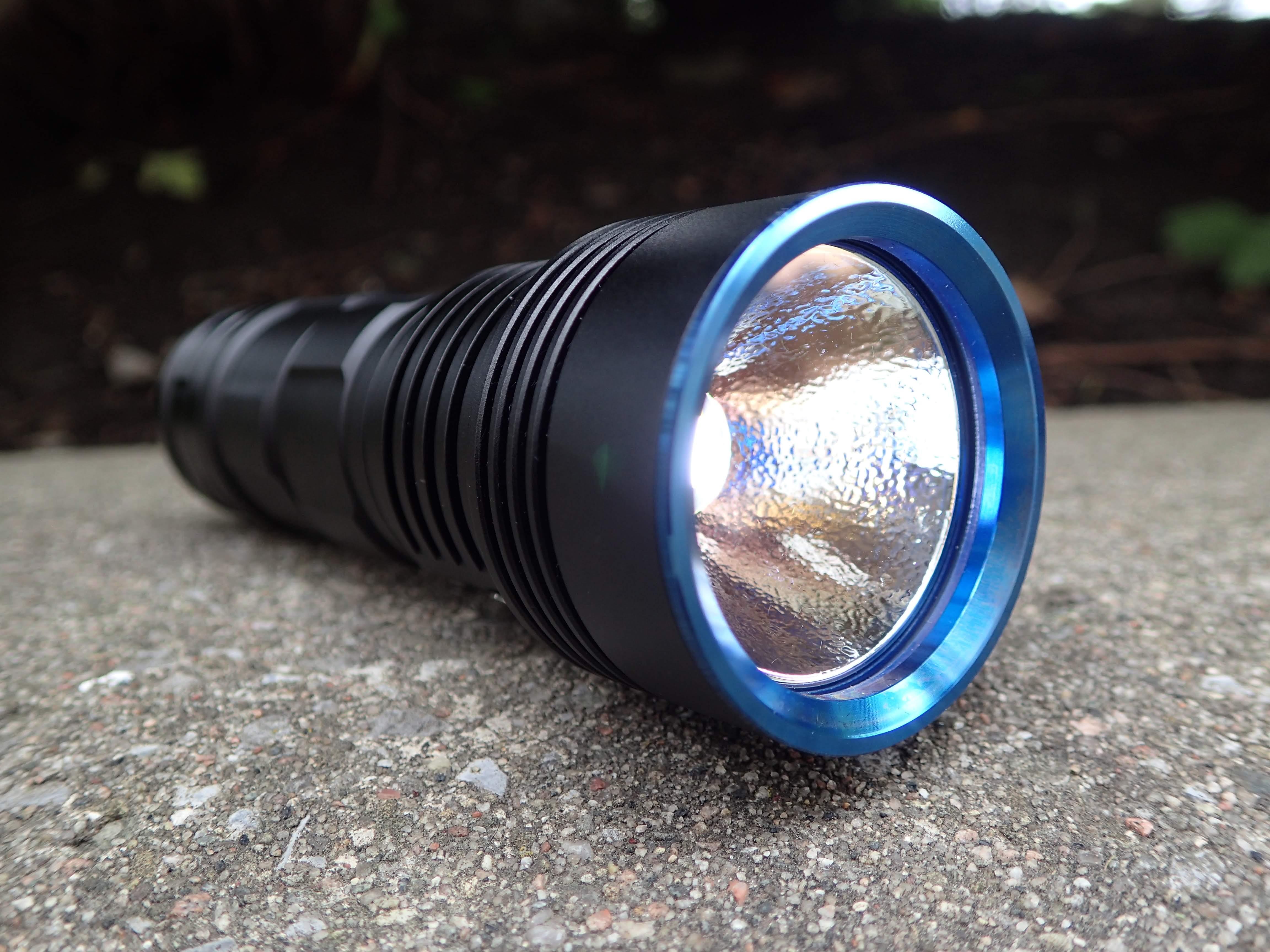 One side of the head of the light has the switch, which has a red indicating LED beneath it. The other side has the micro USB port for charging, which is covered by a rotating stainless steel dust cover when not in use. As previously mentioned, this port itself is waterproofed. There is no seal of any sort on the dust cover. Just a note, the small detent seems to be in place beneath and above the USB port to hold the cover in place, but I didn’t feel any noticable ‘click’ into place. I also thought one of the detents was a small charging LED, and stared at it for an embarrassing amount of time before turning the light over and realizing the charge status LED is under the button. The head of the light has a few thick fins cut into it for cooling, but there’s no major increase in diameter from the body. 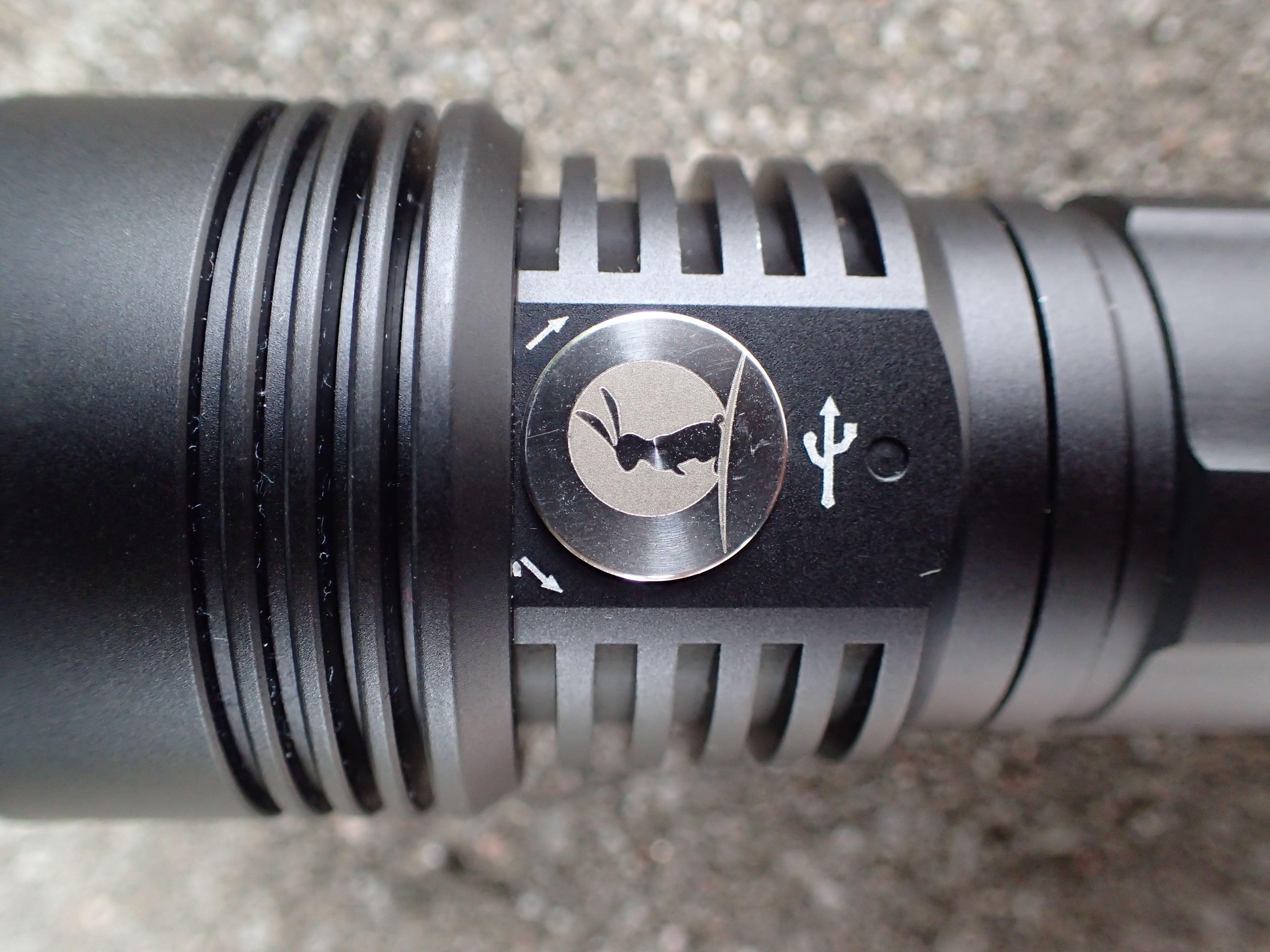 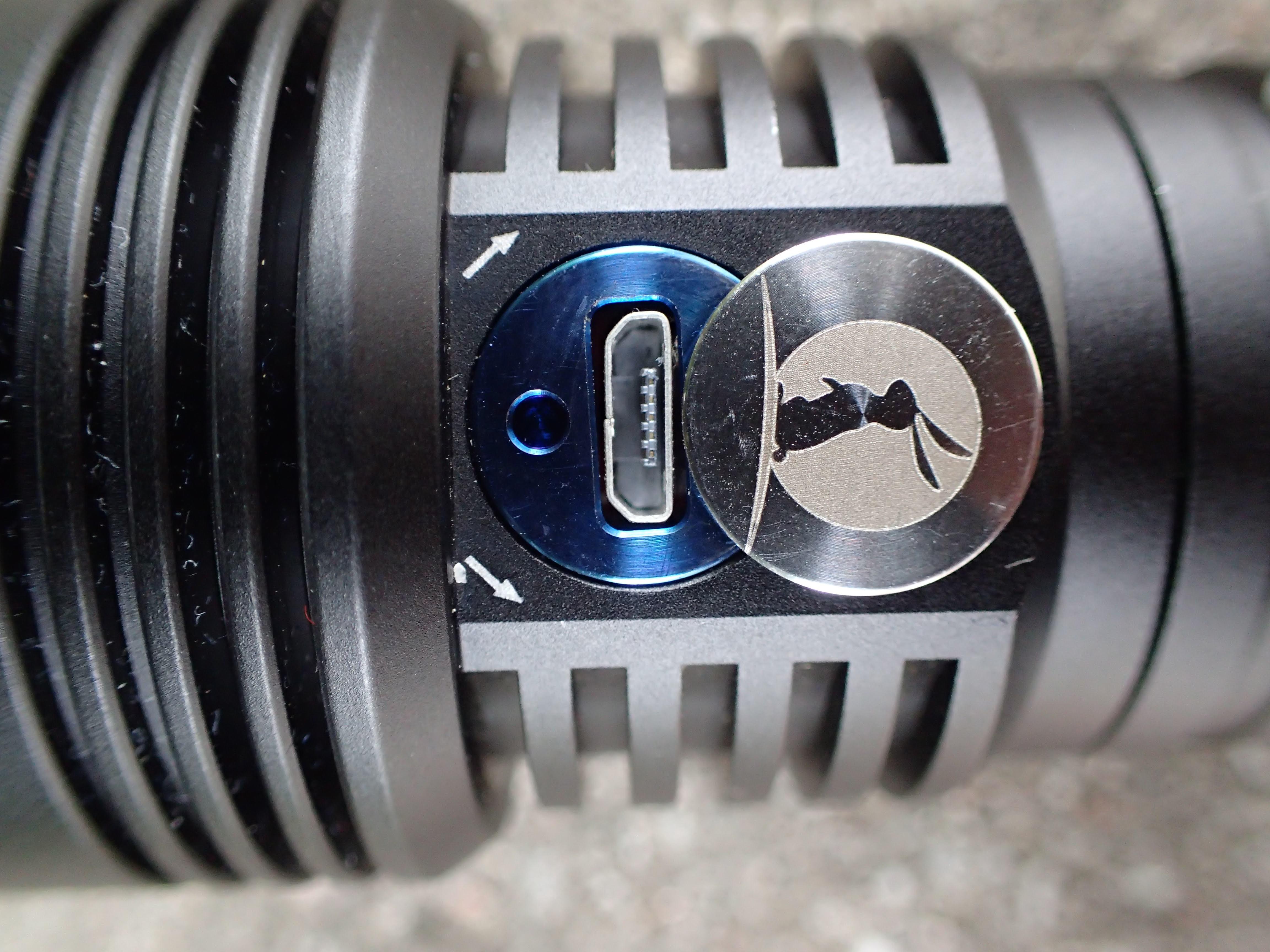 The body tube is threaded into the head of the light, but I was not able to easily unscrew mine. That means the disassembly I was able to perform was limited to removing the tail cap. The tailcap threads are nicely cut, thick, square, and anodized. Mechanical lockout is possible with a small twist of the tail. 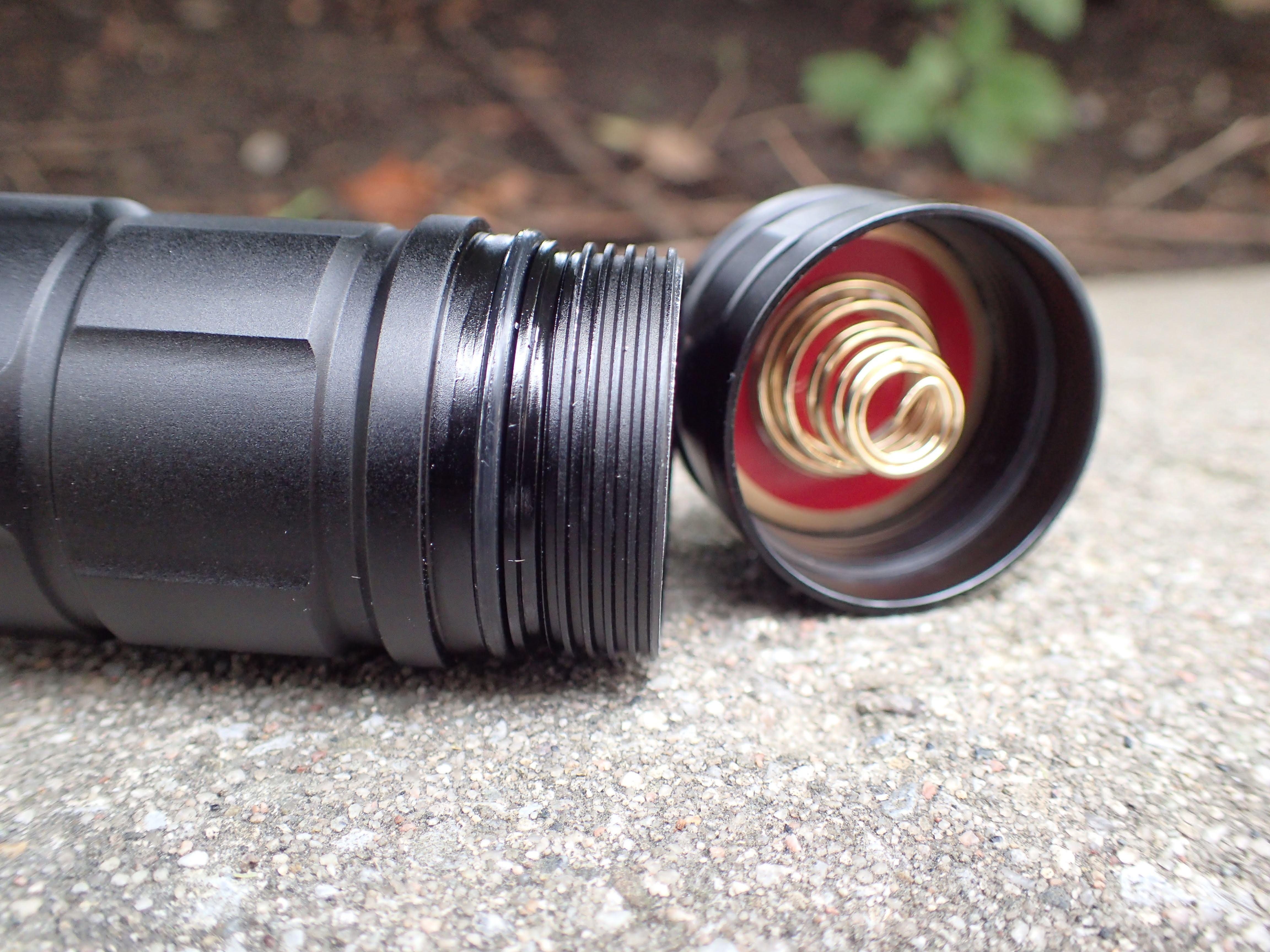 Inside, the light has a thick dual spring for contact in the tailcap. There’s a small sticker indicating cell polarity, which is a nice touch. The contact at the positive end is a button, but it seems to have some spring to it as well. The flat top cells I used had no issue making contact. 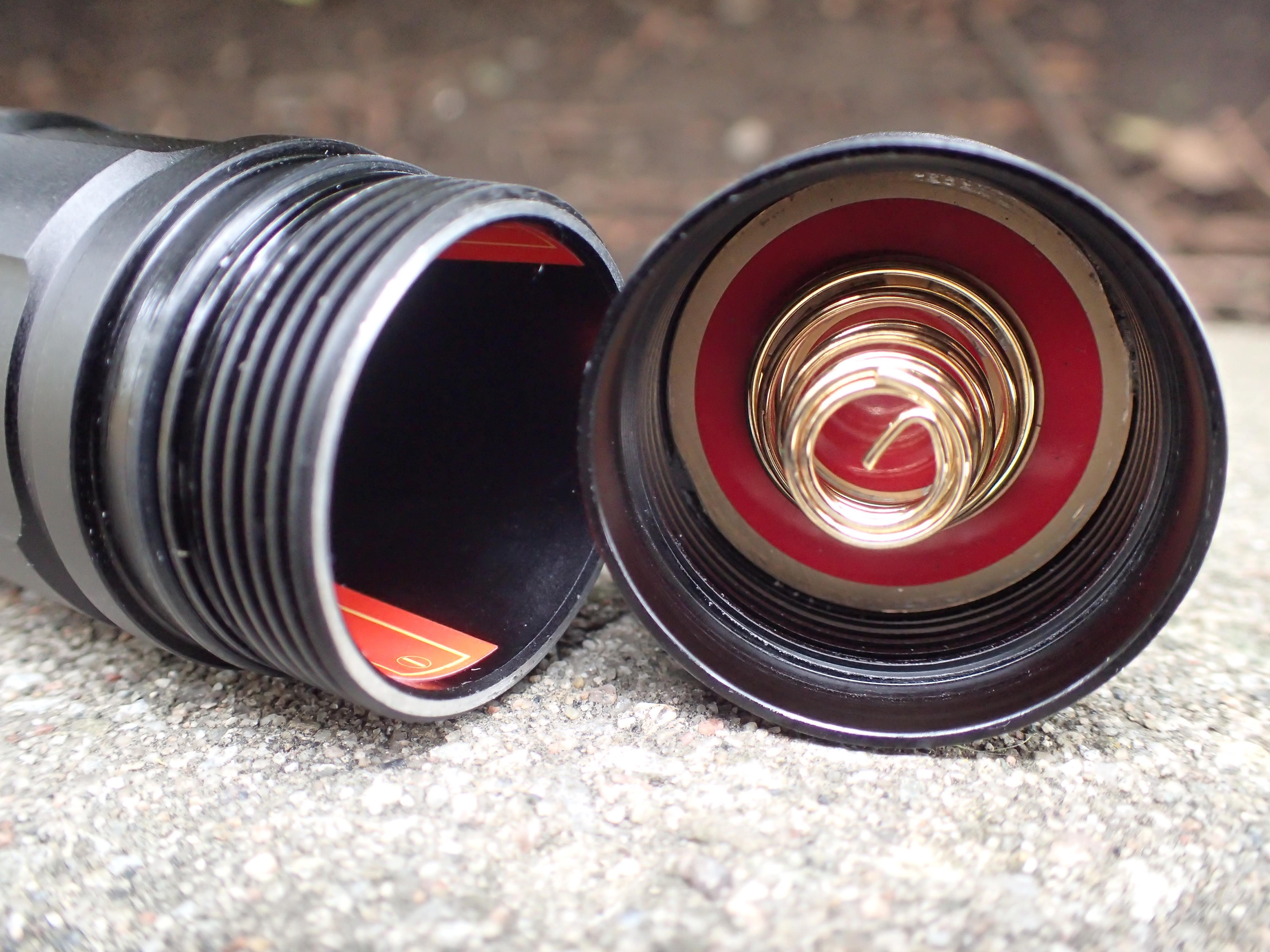 The tailcap has an indent in it, but is very stable for tail standing the light. There is also a lanyard hole in the tailcap.

The light comes in Lumintop’s standard thick cardboard box. I personally don’t care very much what my boxes look like, but I have to admit that their packaging is excellent. The light is nestled in some custom cut foam. If the light ships with a cell included, which mine did, the cell will be installed in the light and wrapped in plastic. Make sure to remove the plastic before turning the light on. I didn’t do this, and the plastic had worn enough that the light started up. Extended use could cause the plastic to melt and get messy in there. 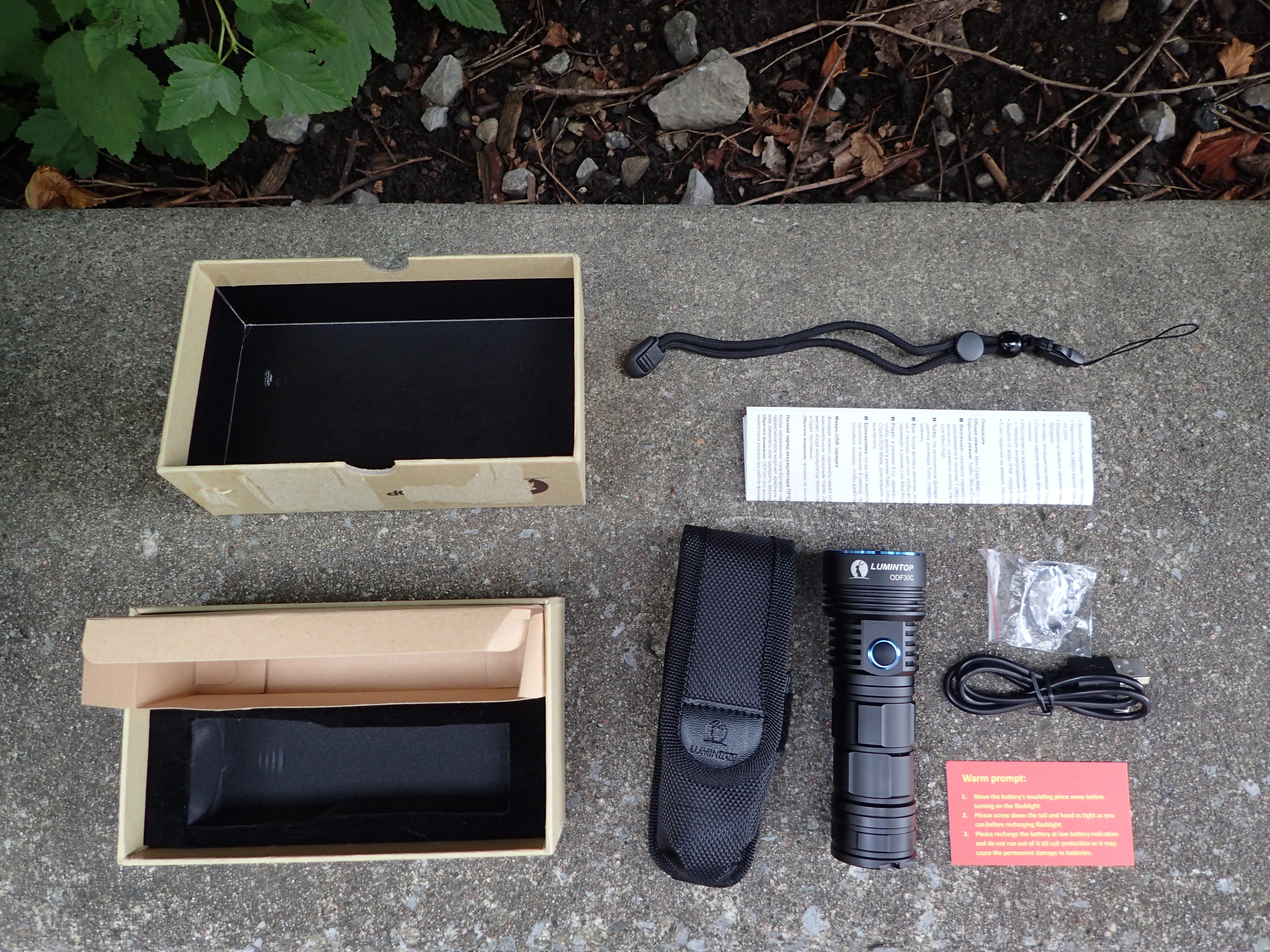 The small box next to the light includes a lanyard and a holster for carrying the light, as well as the warranty card, manual, and a spare o-ring. The lanyard can only be installed at the location in the tailcap. The holster has a velcro closure, and a single sewn loop on the back for threading a belt or strap of webbing through. The holster will only hold the light head up. 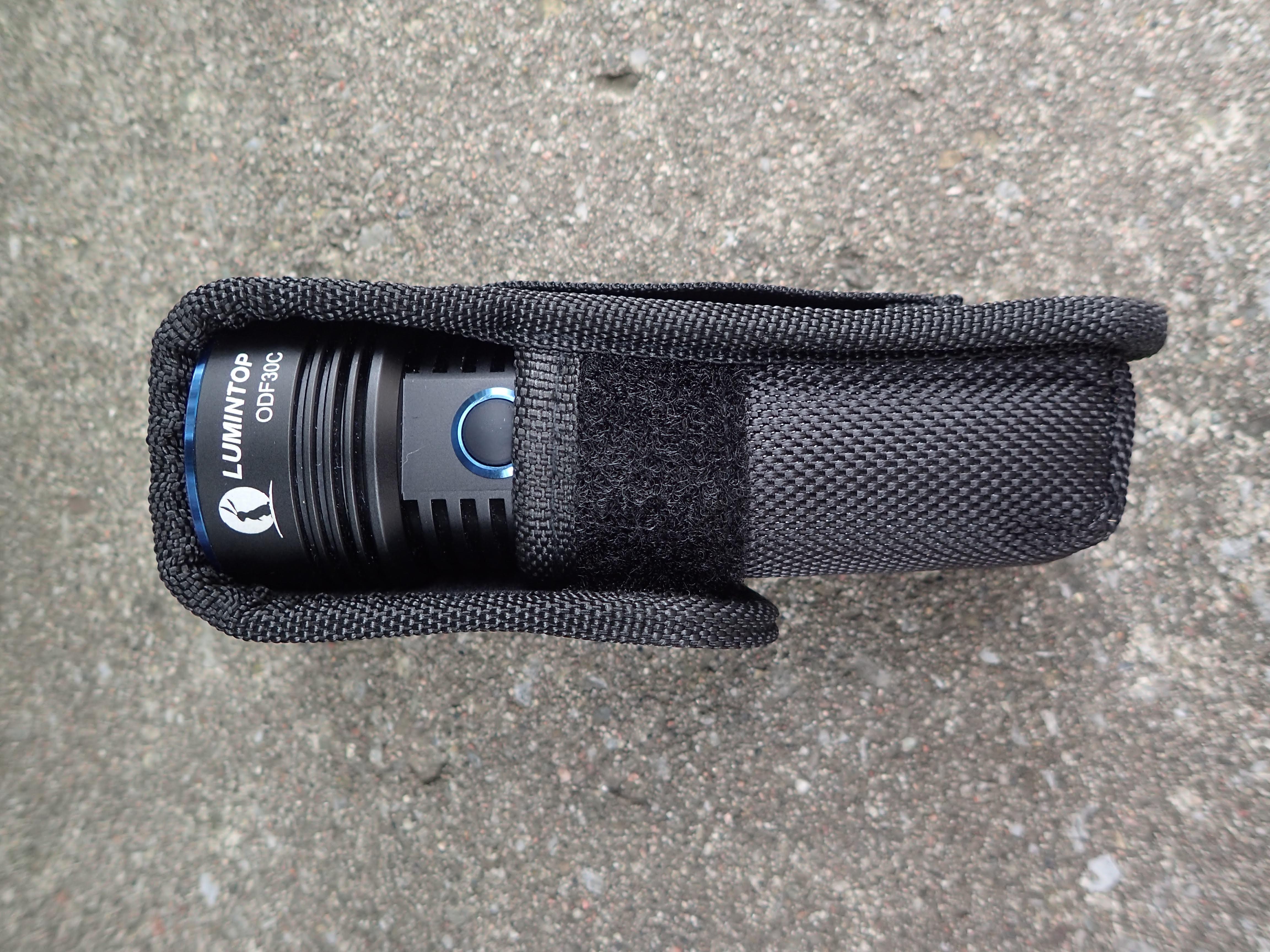 Lumintop includes a interface flow chart, which I’ve added below, in their manual. Overall it’s a good UI with decent mode spacing. I would strongly prefer a long press to change modes and a short tap to switch the light off, and I’m not sure why so many manufacturers like to use long press for off on so many lights. I like that there are easily accessible shortcuts to both moonlight and turbo, and I like that strobe isn’t easy to accidentally activate.
The lockout is interesting. When the light is locked out, the button is momentary low regardless of the number of times pressed or length held. This makes for a great peeking into a corner mode. The downside of this is that there is no button combination that can unlock the light. To access the normal modes, you have to slightly unscrew and refasten the tailcap. This makes the mode less of a lockout, and more of a simplified or beacon mode group… But I still like it.

There’s a lot of very floody lumens pouring out of this light. It’s by far the most powerful light I currently have. That being said, the large XHP70.2 has a ton of tint variation across the beam. I’m glad Lumintop used a textured reflector to help smooth this out a bit, but I still find the colors very noticeable in real use. I can’t fault them for this too much though - this is the only emitter that can get this kind of output, and lights using this LED have been very popular for just that reason. The chosen emitter is cool white. 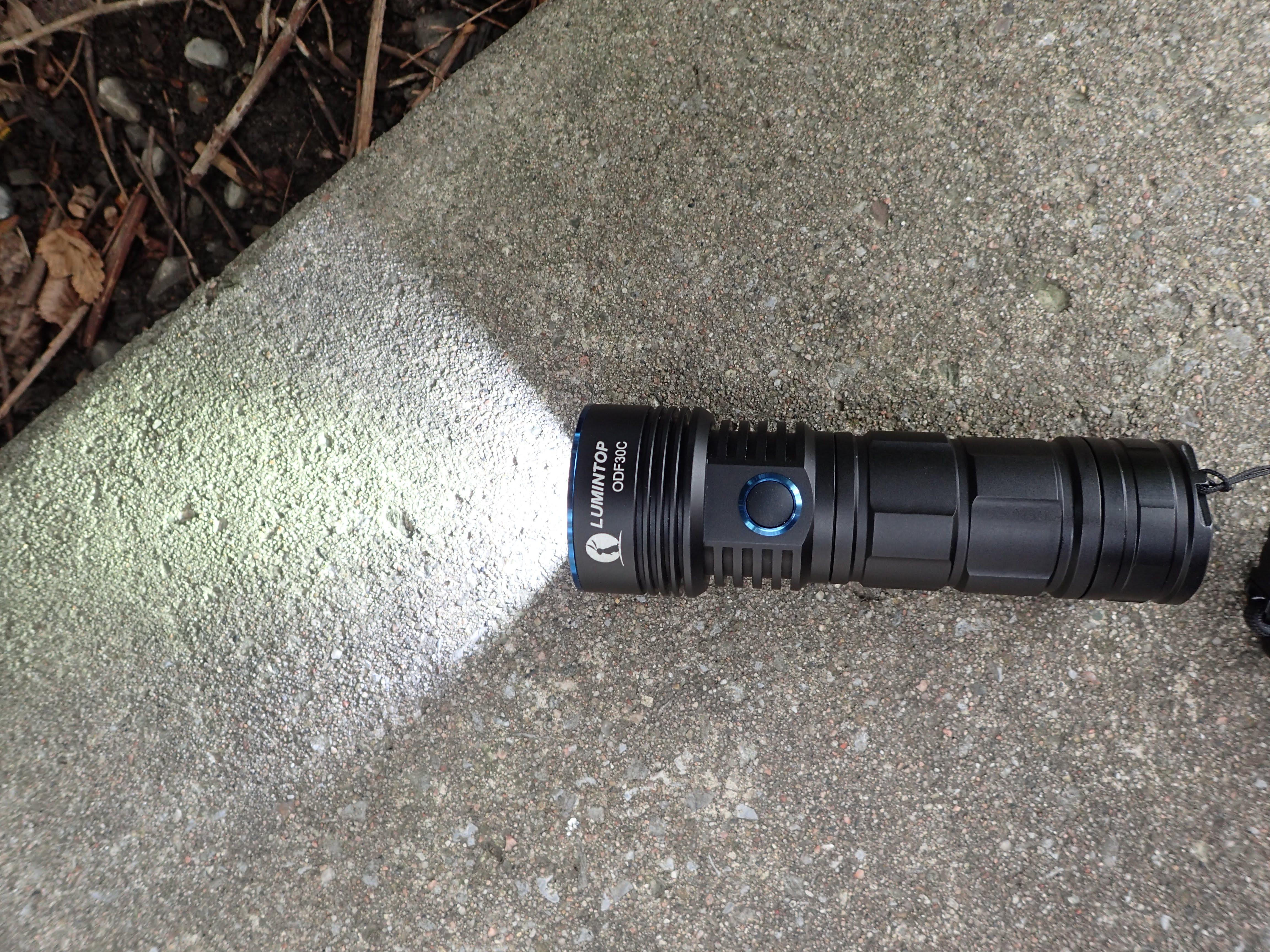 Runtime tests were done with the provided cell and left to run until the light switched off. After switching off, the indicator LED under the switch continues to blink. Both the turbo and high modes get just about exactly the runtimes Lumintop claims. I don’t have a set up that can measure lumens accurately, but my DIY solution measured the output on high to be about 40% of the turbo output. Lumintop claims turbo to be 3500 lumens and high to be 1800, which would be about 51%. This means that either my turbo is higher than expected, my high is lower than expected, or my setup is bad enough that there was a large variation between my two tests. To be honest, any of these three are about equally possible. 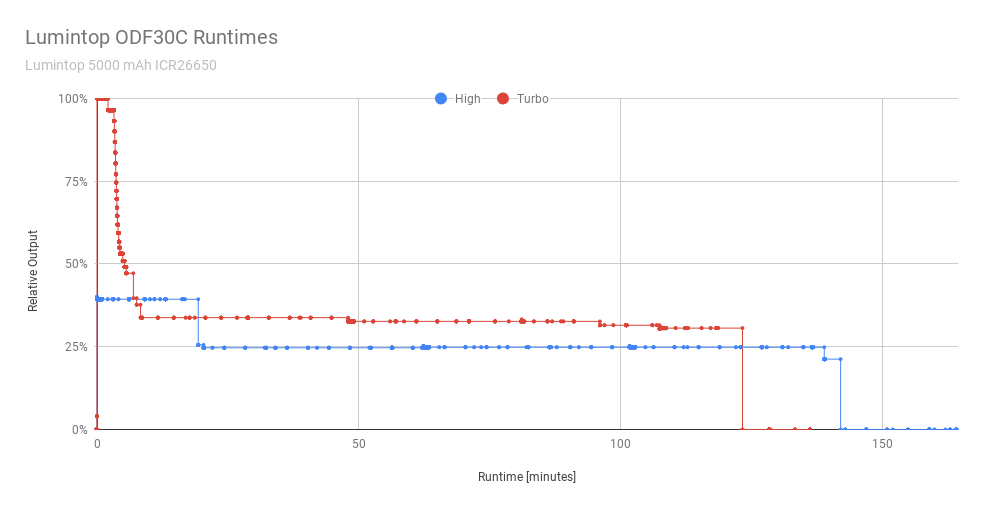 Both modes show a single step down, and the step down from turbo seems a bit more drastic than I would prefer. I really like how stable the output is for the rest of the runtime on both modes.


Charging and Use While Charging

Charging is done through the micro-USB port. The port had no trouble accepting any of my cables. When charging begins, the LED under the switch will flash. Once the cell is fully charged, the LED glows steady.
While the light is charging, a single press of the button turns the light on in low, and another turns it off. This works even if the cell is removed. There are no other modes accessible while charging the light.
Of course, I would prefer if this light also used a USB-C port in place of the micro USB port. This is especially frustrating since Lumintop makes the ODL20C, a very similar light with a different emitter and a larger reflector for more through, and that model uses a USB-C charging port. The downside is that waterproofing on that light is achieved with a rubber flap. Which brings us to...

Being a flashlight enthusiast, there are some features I really don’t like to see on lights. One of those is a flimsy rubber flap covering a vulnerable charging port. I get that not every light is used for SCUBA diving, but I think most lights will get wet at some point in time, and I think most flimsy flaps will fall off at some point in time. I was really excited to hear that Lumintop went out of their way to waterproof the port itself on this light, to the point that it was actually the main reason I wanted to try it out. 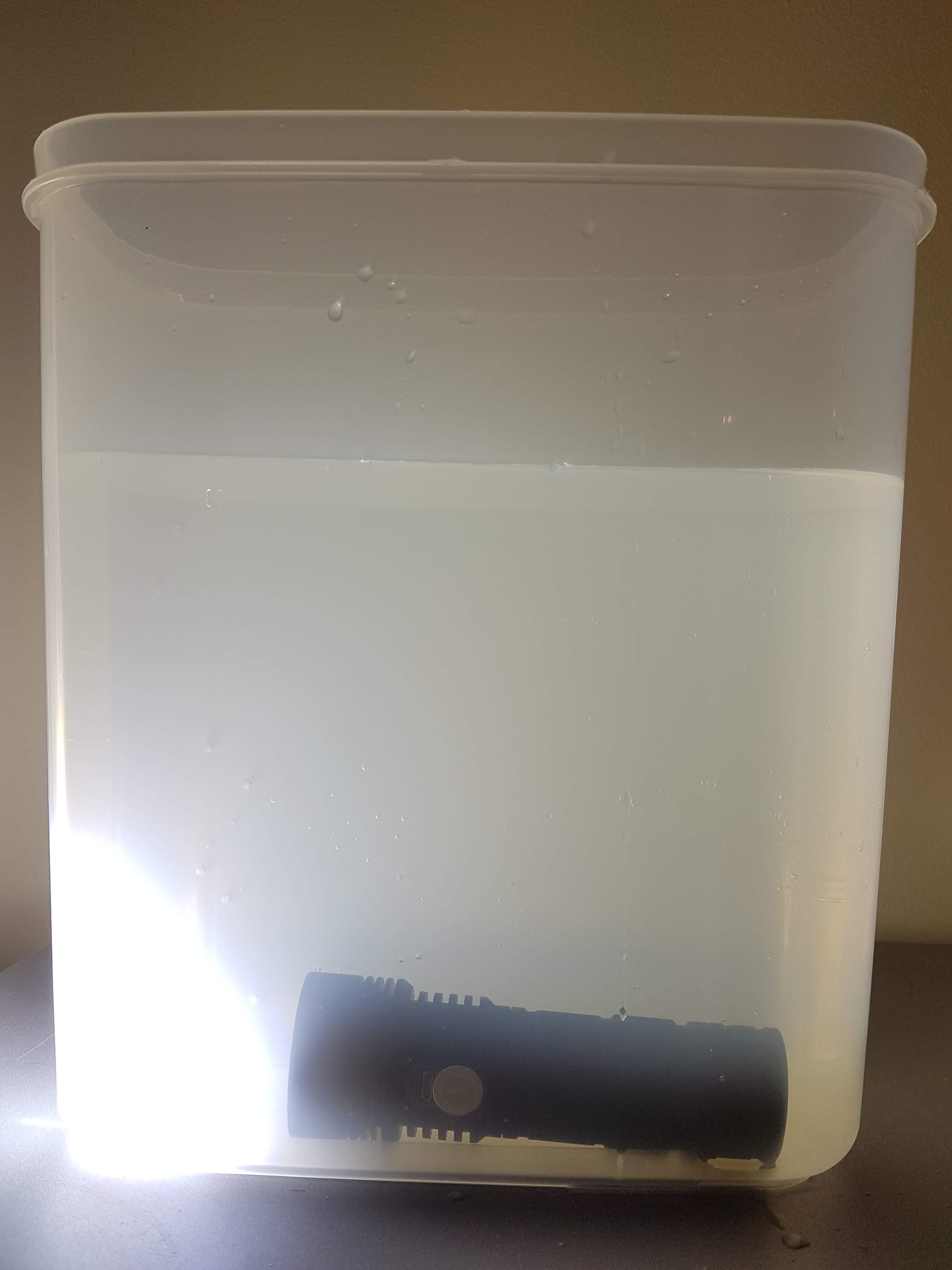 The official rating is for 2 m submersion for up to 30 minutes. I didn’t have 2 m of water handy, but I dunked the light and left it on for 30 minutes, reaching into the water a few times to shake it around, fiddle with the dust cover, and use the switch. Although this is far from an exhaustive test, the light worked great and didn’t show any signs of ingress after the test. Charging still works as it did before. Kudos, Lumintop! I hope to see more manufacturers adopt this going forward. 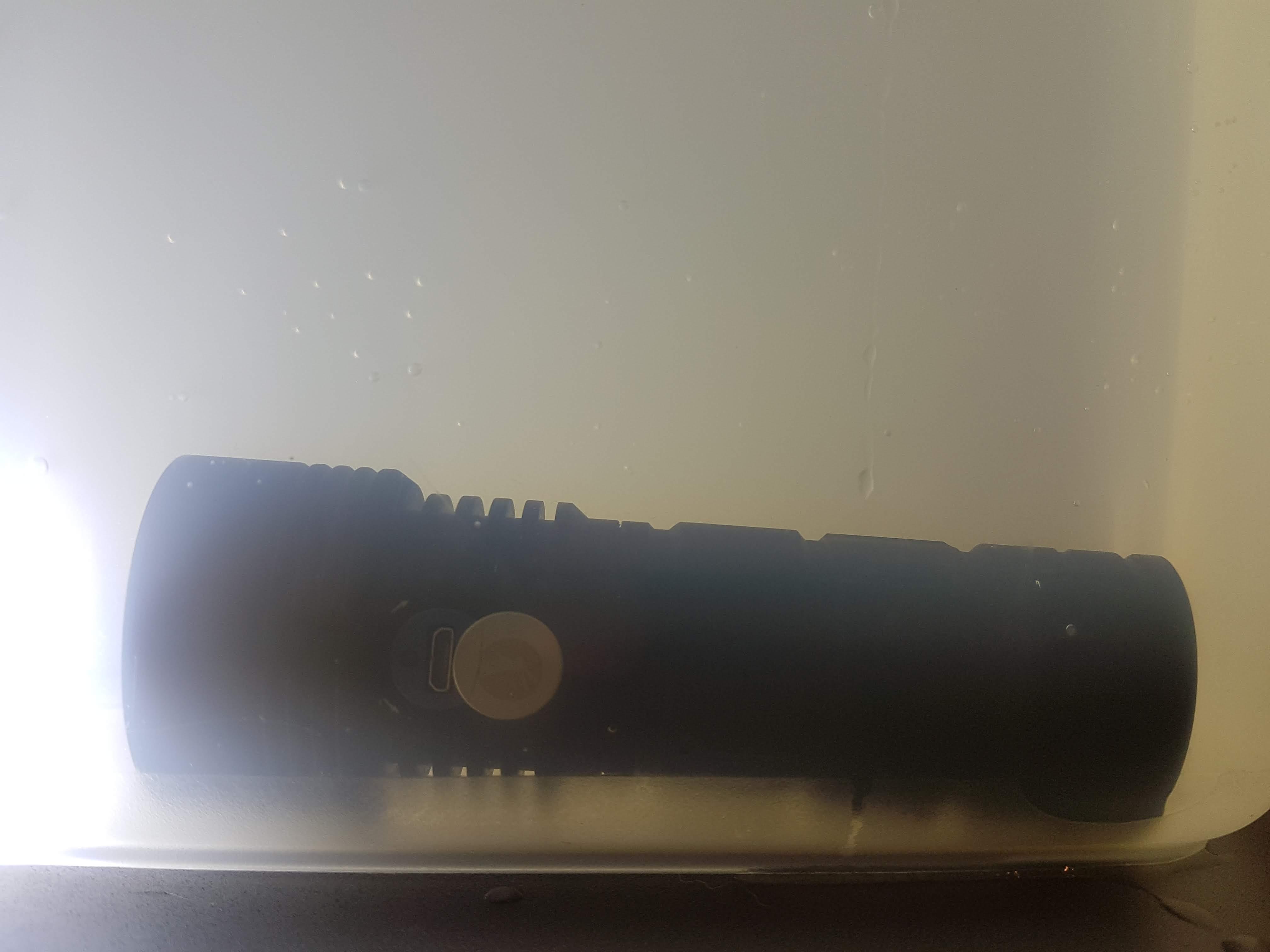