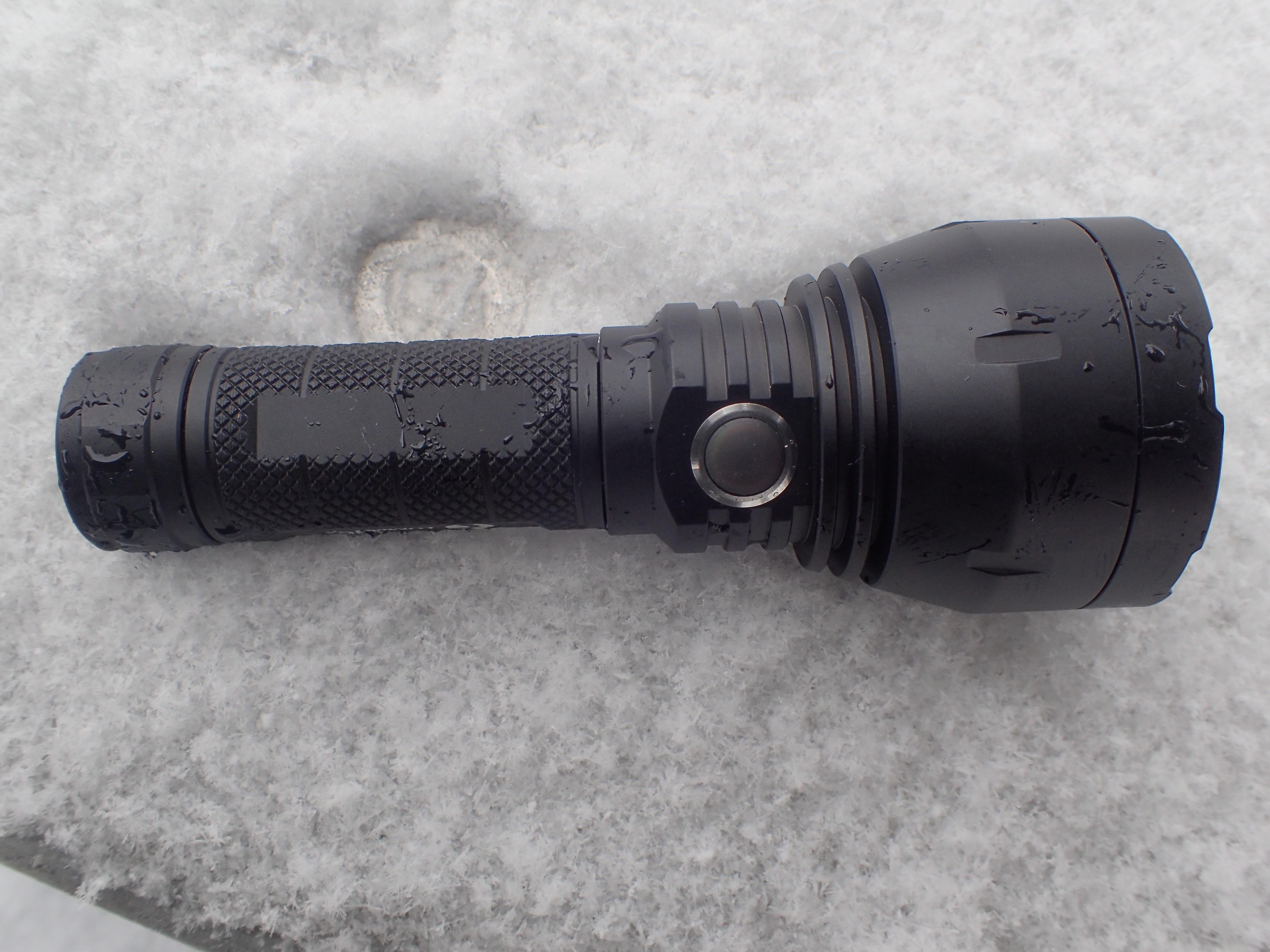 Gearbest was kind enough to send me the Lumintop GT Mini for review (affiliate link). This is a single 18650 thrower with a side switch and a ramping interface. The light is small enough to fit in a jacket pocket, but uses an XP-L Hi inside a large head to get some powerful throw.
This light is a follow up to Lumintop’s successful GT, but there’s no mixing the two lights up. The original ran off of 8 times as many cells, making it much larger and more powerful. They also make a less throwy version with more output, the GT 70. The “Mini” version I’m looking at shares nothing with those first two besides the industrial design, ramping UI, and focus on throw.

It might sound silly, but one of the main reasons I got into flashlights was for walking my dog on cold dark evenings. My main tool for the task is a headlamp, but I also like to carry a secondary light that fits in a pocket, can be operated with gloves on, and has some more reach.
This light does a great job at all of the above. If you don’t have a thrower and you’re considering getting one, this is just about the best option for something single 18650/18350 sized. If you already have something throwy, I would still recommend picking one of these up - it’s just heaps of fun. 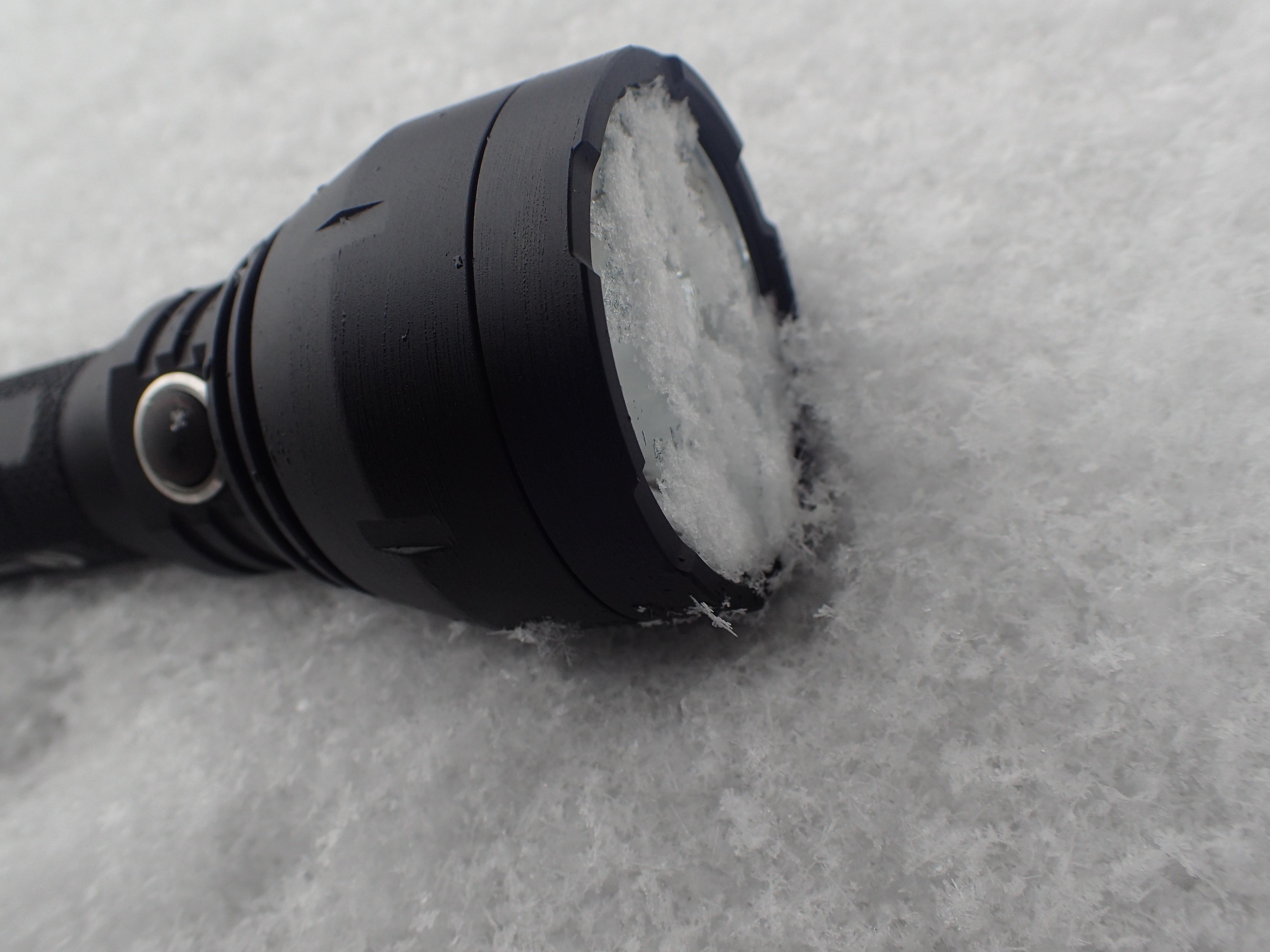 The head of this light is much larger than the body, with some slight crenelations on the bezel. Behind the bezel, the head has a smooth profile coming down to the diameter of the cell tube. Towards the body of the light, there are some fins cut to help with cooling. There are some short slots cut into the head, which add some roll resistance to the light. 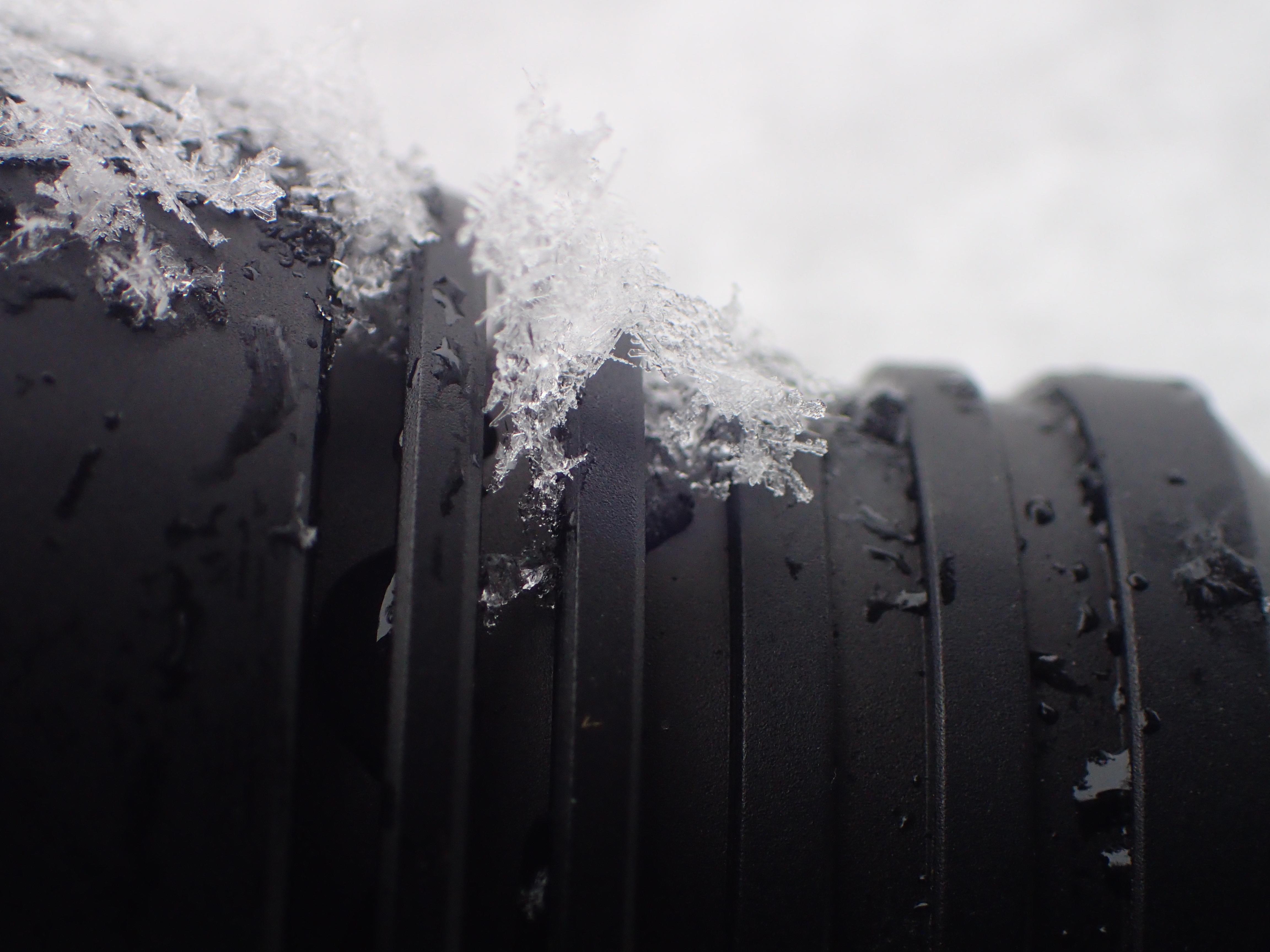 Two of these fins are deep, and completely circle the head. The remaining few are shallow, and leave a gap for the backlit switch. The switch is convex, and has an indicating LED beneath it. It’s held in the body of the light with a stainless steel ring. 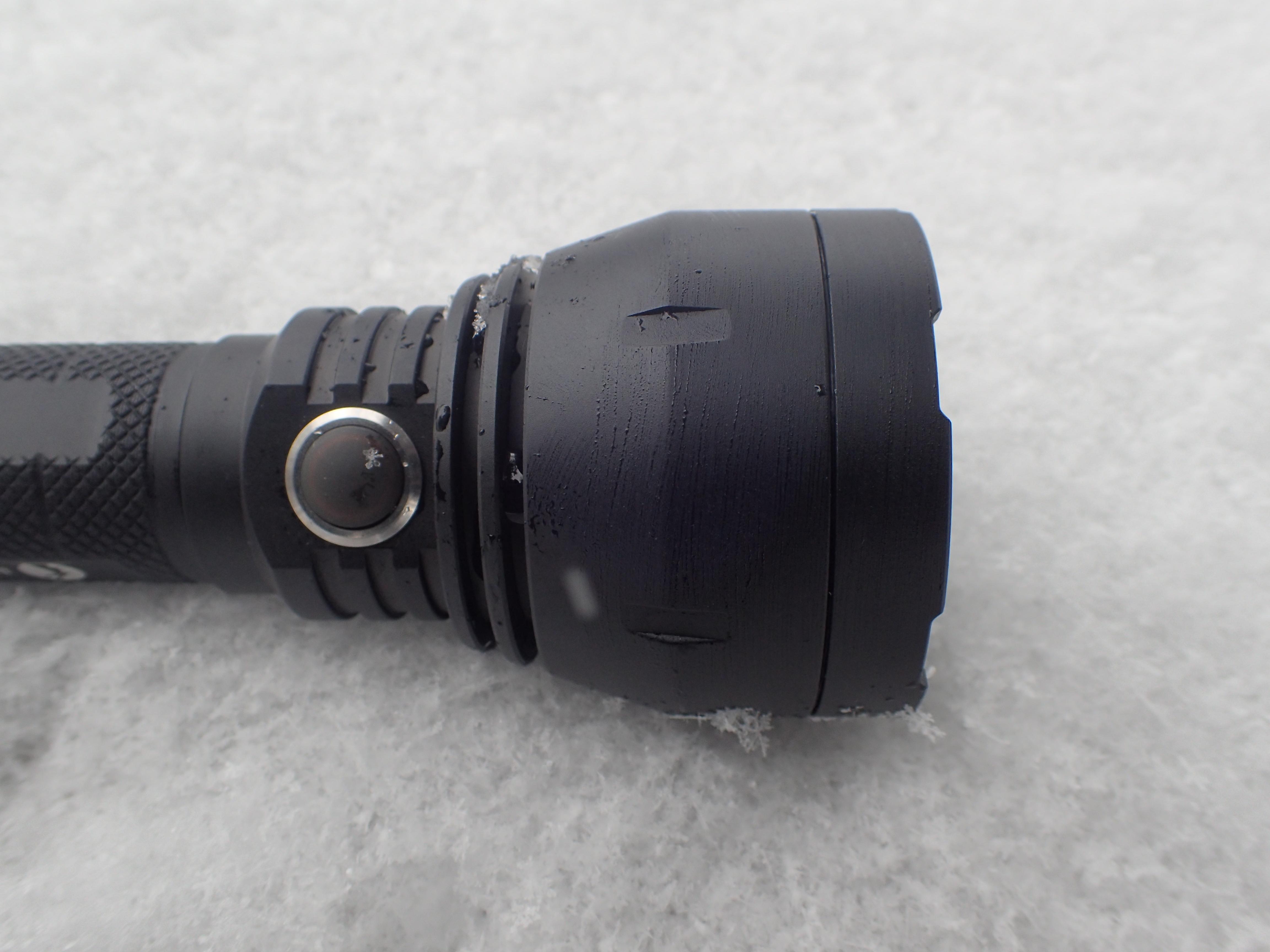 The 18650 body tube is the one I used. It has some excellent flat-top diamond shaped knurling along its length. There are 4 flat sides milled into the body, two of which have the brand and model etched into them. There are also 3 grooves cut into the knurling for aesthetics and a bit of added grip. The 18350 tube has the same knurling, but none of the other adornments - it’s also shorter, of course. 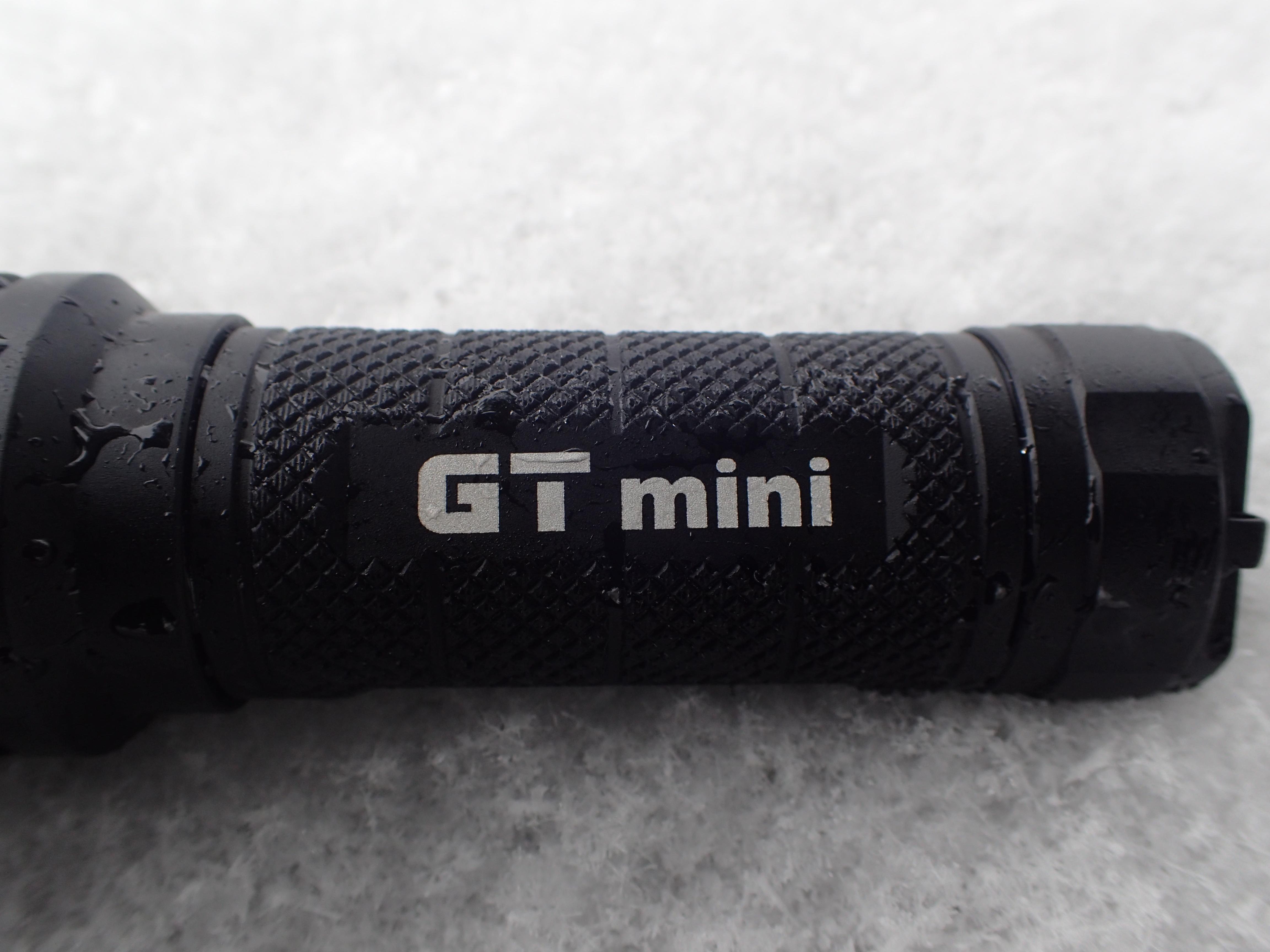 The tail cap is flat on the base, and will allow the light to tail stand. There’s a lanyard hole in the tailcap, the only attachment point on the light. 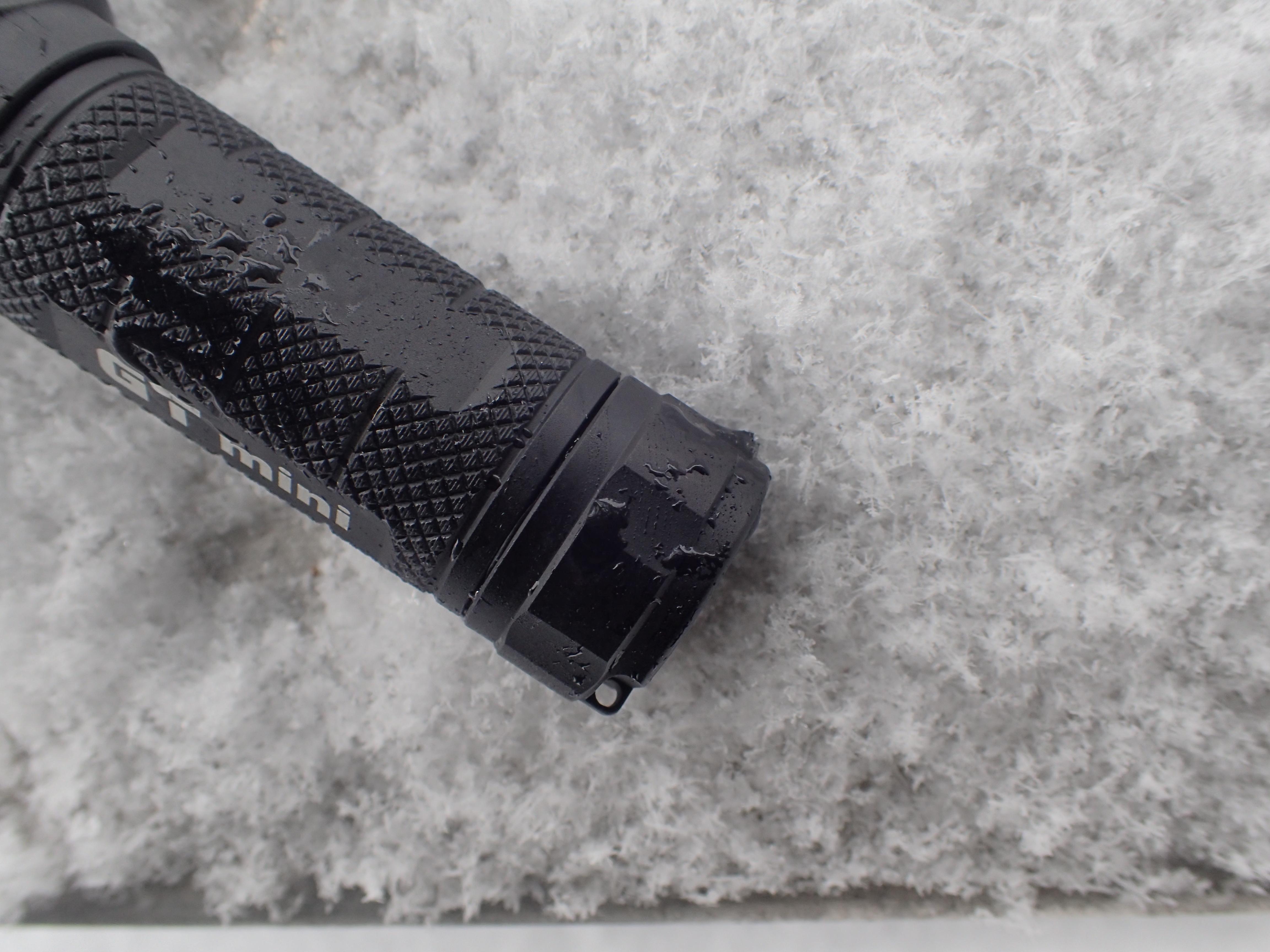 Inside the tailcap, there’s two nested gold colored springs serving as the negative contact. The threads are square cut and anodized, so physical lockout is possible. I found the tailcap extremely tight to get over the O-ring out of the box, but a bit of lube helped with that. 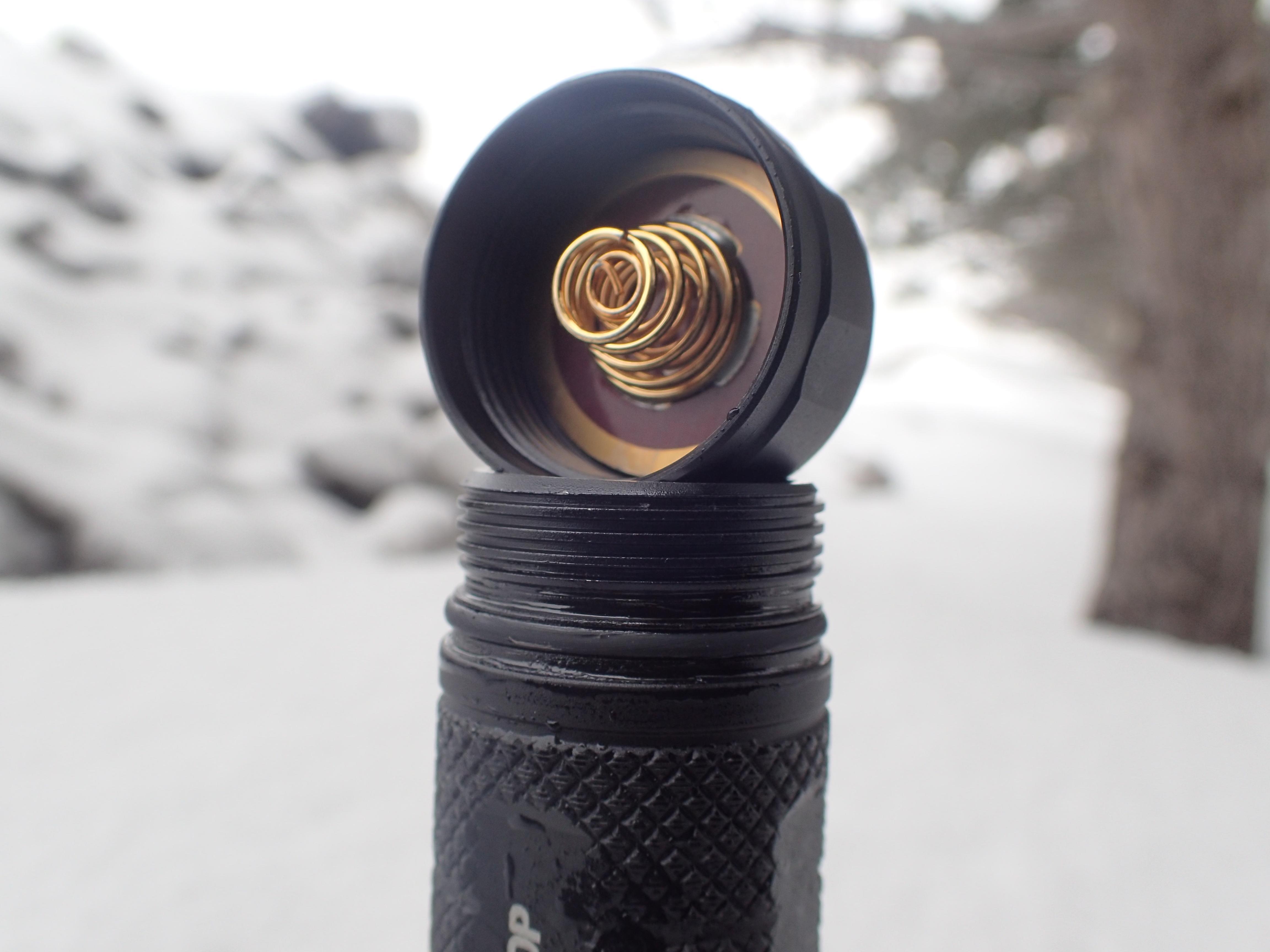 The threads at the head of the light are similarly anodized. There’s a spring at this end of the cell tube too, and the threads are square cut again. The driver appears to be press fit into place. 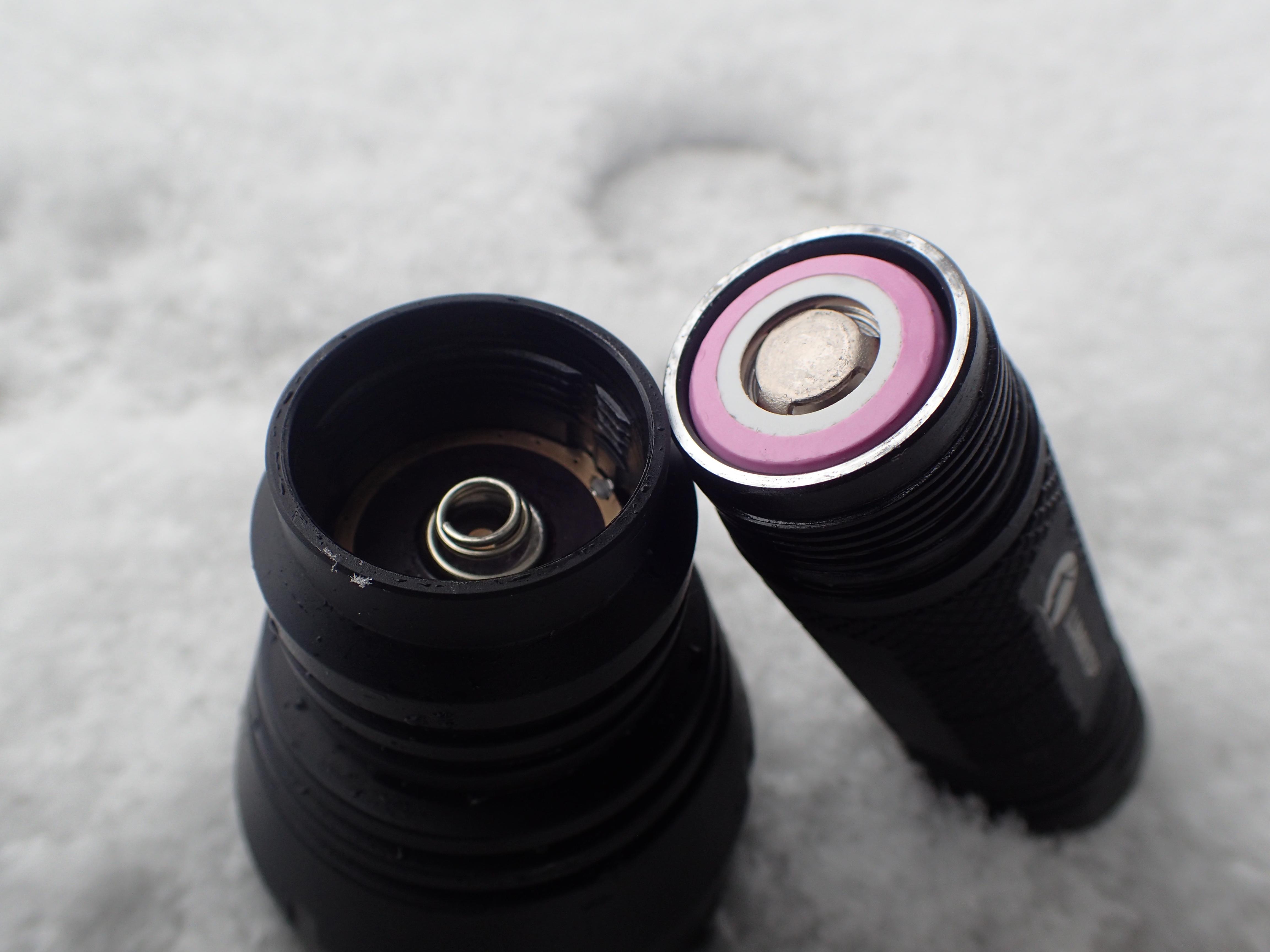 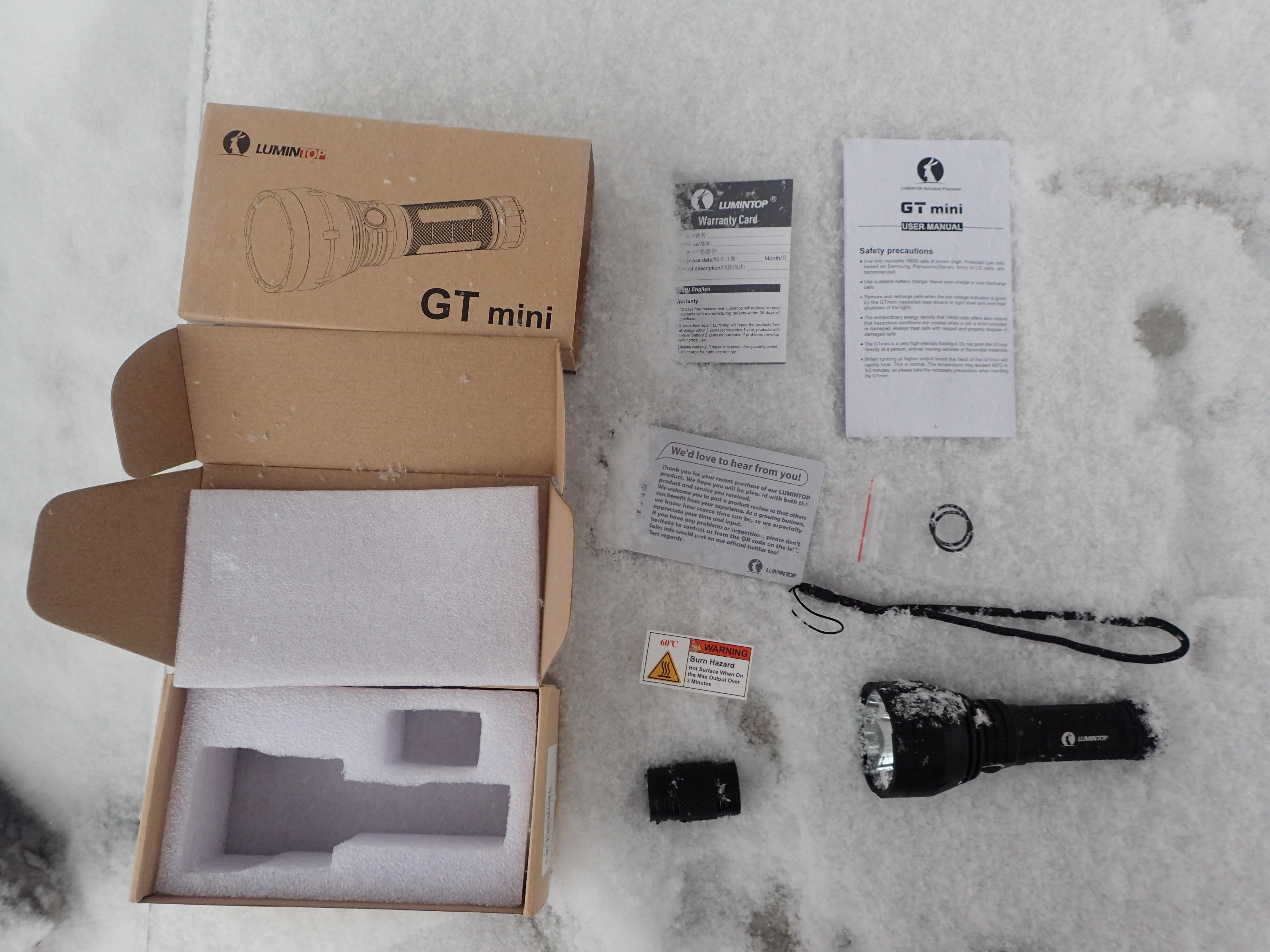 This light comes with:

The knurling makes this light very comfortable to hold, despite the chunky head. It’s fairly light, and has great grip. I had no issues using the switch with even the largest Canadian-grade winter mitts.
As far as retention, this light lived in my pocket most of the time. There’s a lanyard hole at the tail for attaching the included lanyard. No pocket clip was included, which is a reasonable choice for a light of this shape.

This is certainly one of the major highlights of this light - the light uses NarsilM, which is a firmware that allows huge amounts of customization. You can configure basic things, such as switching from standard modes to ramping user interfaces, all the way up to setting the temperature you want the light to step down at. Narsil is complex enough that I could do a whole write up on it, but I’ll just say that it’s fantastic and I am extremely pleased to see more lights using this and similar interfaces.
I left the light in the stock ramping mode - single press for on or off, hold to ramp, double tap for turbo.

This light uses a neutral white XP-L Hi in a large, smooth reflector. It’s also available with a cool white emitter, if that’s your preference. The beam it makes is extremely throwy. You can use it for a hike, but it’s really not well suited to close up work. That’s not a complaint at all, it’s just not what this light was meant for. 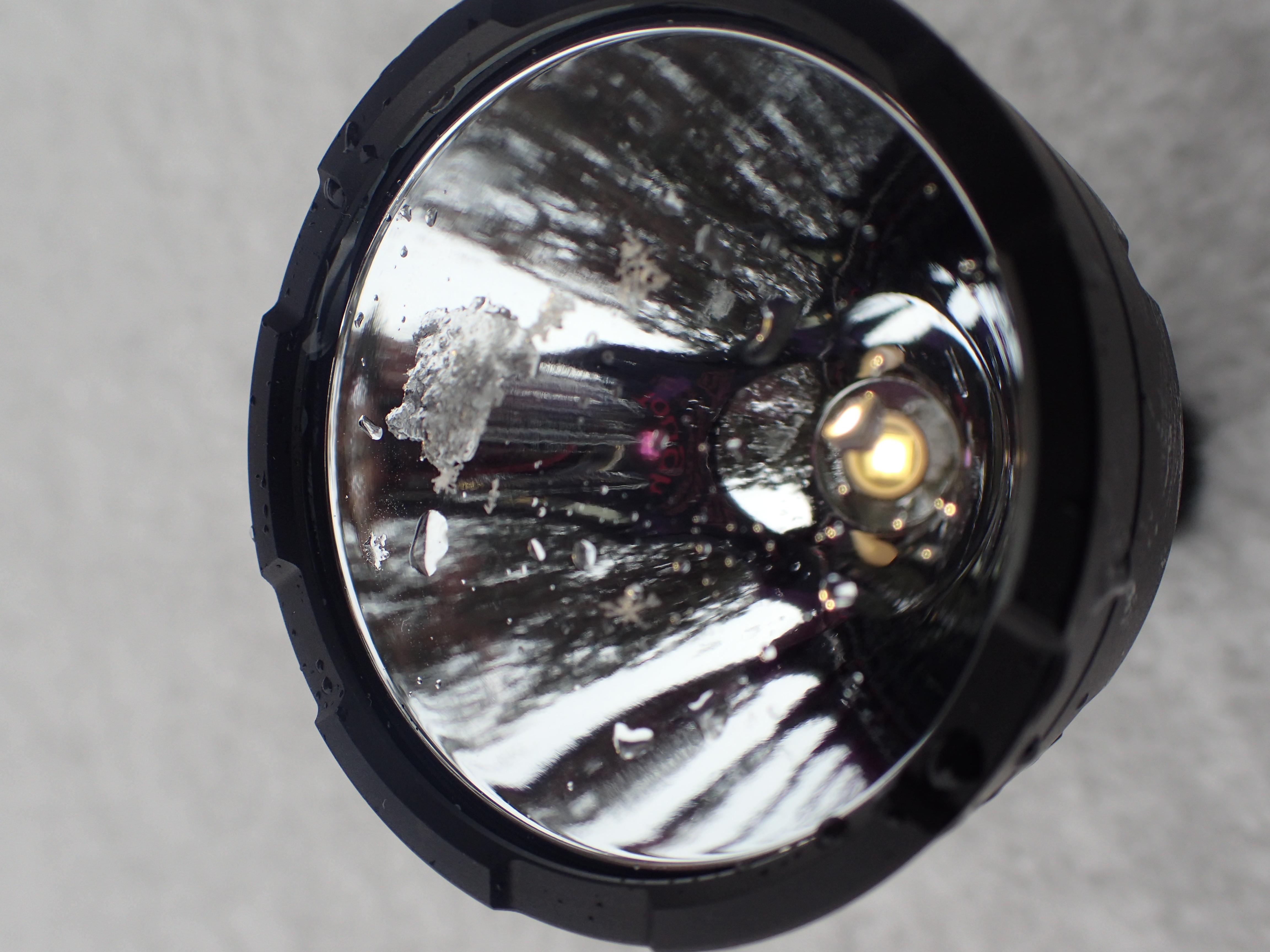 In my experience, this light produces a beam that’s powerful enough to find a dog in a field over half a kilometer away.

This light can run off of either an 18350 cell or an 18650 cell - my tests were all performed with an unprotected flat top 30Q. The cell tube has springs at each end, and isn’t picky about cell type. The unprotected flat top had no issues making solid connections, and even a protected button top Nitecore cell fit in there. That cell measured 69.7 mm including the button, but truthfully is was a bit crammed in there and the spring left some marks on the negative end of the cell.
The driver used in this light is a direct drive setup, which means a lot of things. First of all, unprotected cells are preferred, as turbo mode may trip the protection on others.. Secondly, this kind of driver means that testing performance is variable. A FET or direct drive light basically just straps the jumper cables from the batteries to the LEDs in turbo mode and hopes for the best. The good part of this is that you really get the highest possible output from the light, but the downside is that any slight change in temperature, cell, or any other number of factors will change the results. 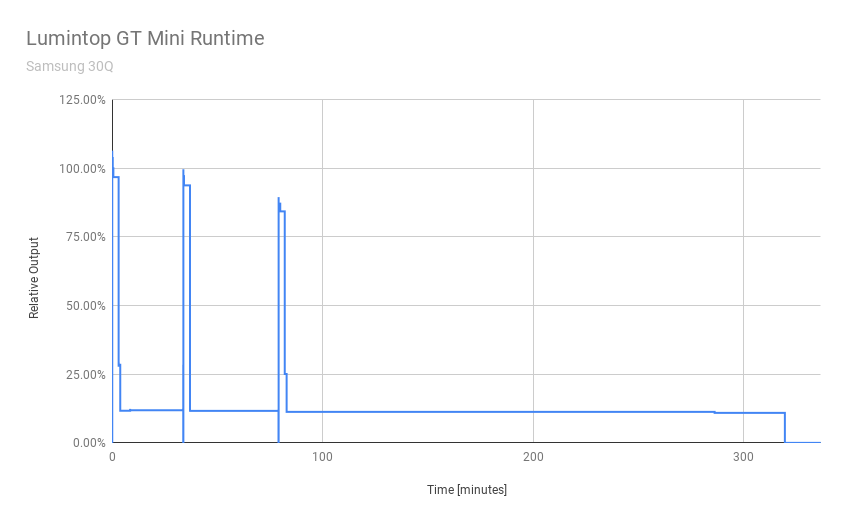 With the cell that I used, the light steps down after about 3 minutes on turbo and settles close to 12% of the output at 30 seconds. I reset it to turbo twice, and it got close to the original output, but was tracking down slightly with the voltage of the cell (as expected). With those two resets to turbo, the runtime still lasted well over 5 hours. When the cell is low, the indicating LED starts freaking out so you know to charge it up.


What about the D1S?

I feel it would be unfair to finish up this review without mentioning the Emisar D1S. The D1S has been out for a bit longer, and these two lights have a lot in common:
So what sets these two lights apart, and which of the two should you get? The GT mini has a few features that stand out.
But the D1S has some advantages as well - it’s marginally smaller (with the 18650 tube), comes in more body color options, and has more emitter CCTs to choose from. Overall, it’s a toss up.
Personally, I would pick the GT mini of these two. Not because of the added cell options - I rarely use 18350, and the head is big enough that the size is not noticeably more compact. Also not because of the backlit switch, even though I have a fondness for those.
The anodizing on the Emisar D1S received quite a bit of flak when it came out for the finish used. The anodizing on this light feels a bit like a chalkboard, and it’s rough to the touch. I never found that to be a deal breaker, but the smoother finish on the GT mini makes it slide into and out of my pocket easier, while the knurling on the body tube makes it just as good at staying put in my hand. The smoothly shaped head also helps with this. Since my personal main use for this light involves pulling it out of a jacket pocket multiple times a night, it’s the clear winner for me.