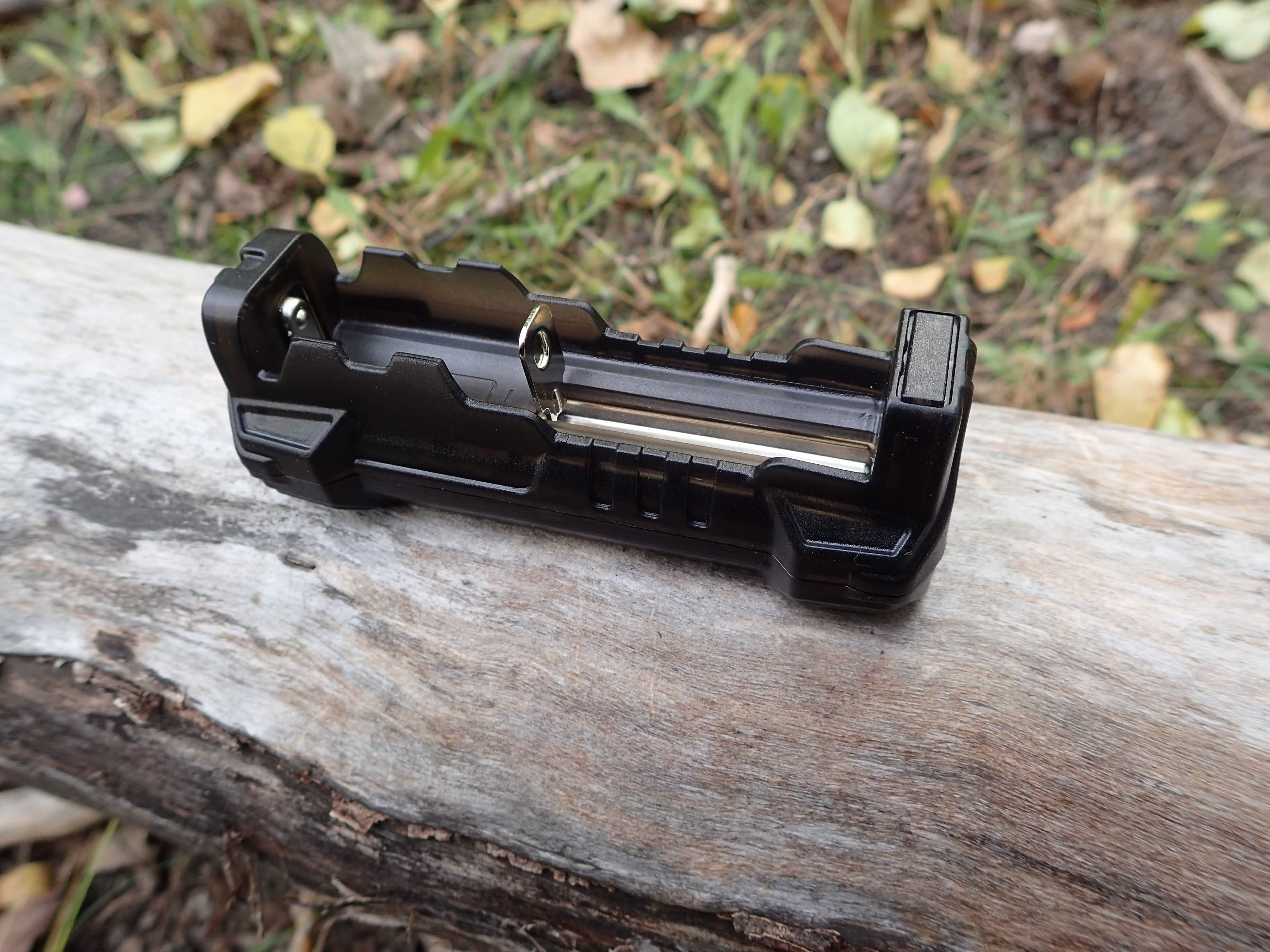 Armytek sent me their new Handy C1 Pro to review. This is a very compact single bay charger for Li-Ion and NiMH cells. The Handy is also capable of functioning as a USB powerbank.

This charger has stellar powerbank performance, and great charging as well. The usual target market for this sort of device is backpackers looking for a way to use their existing cells to charge other devices without adding much weight, but the secure wings make this a great piece of kit to toss in a bag as well. The flexibility to charge NiMH also adds a bit of versatility - this would be a great first charger or charger to gift someone, as long as lower charge currents and larger cell sizes aren’t needed. It's also the charger I'm most likely to bring to work or on a trip, as it's compact and compatible with all the cell types I use most often.

The build is fairly typical of the single bay portable chargers that I’ve seen from other manufacturers. The body of the charger is made entirely of a hard plastic, and there’s a spring loaded metal slider that serves as the negative contact. Inside the bay, there’s a cell polarity indication molded into the plastic. 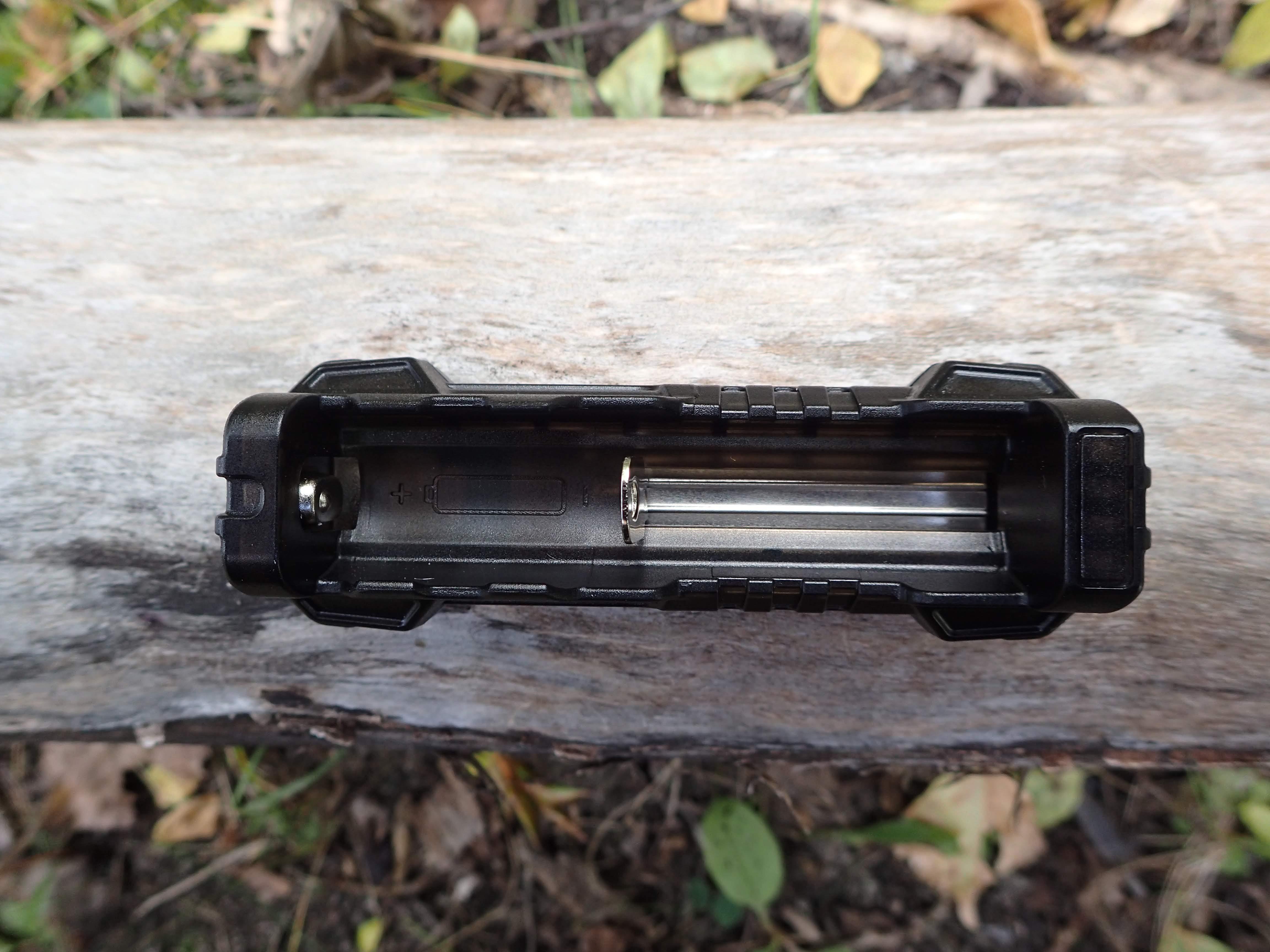 There are two design elements that make this charger stand out from the pack. The first are the ‘wings’ that are wrapped around the positive end of the cell bay. These wings grip 18650 cells and others of similar diameters tightly, so you don’t need to worry about the cell slipping out. This is useful in all instances, but especially convenient if you’re using the device as a powerbank and you want to toss if in a pocket or a bag. It should go without saying, but I would still suggest not tossing it into a pocket alongside keys or anything conductive, even though the cell should have no way of working itself out of the charger. 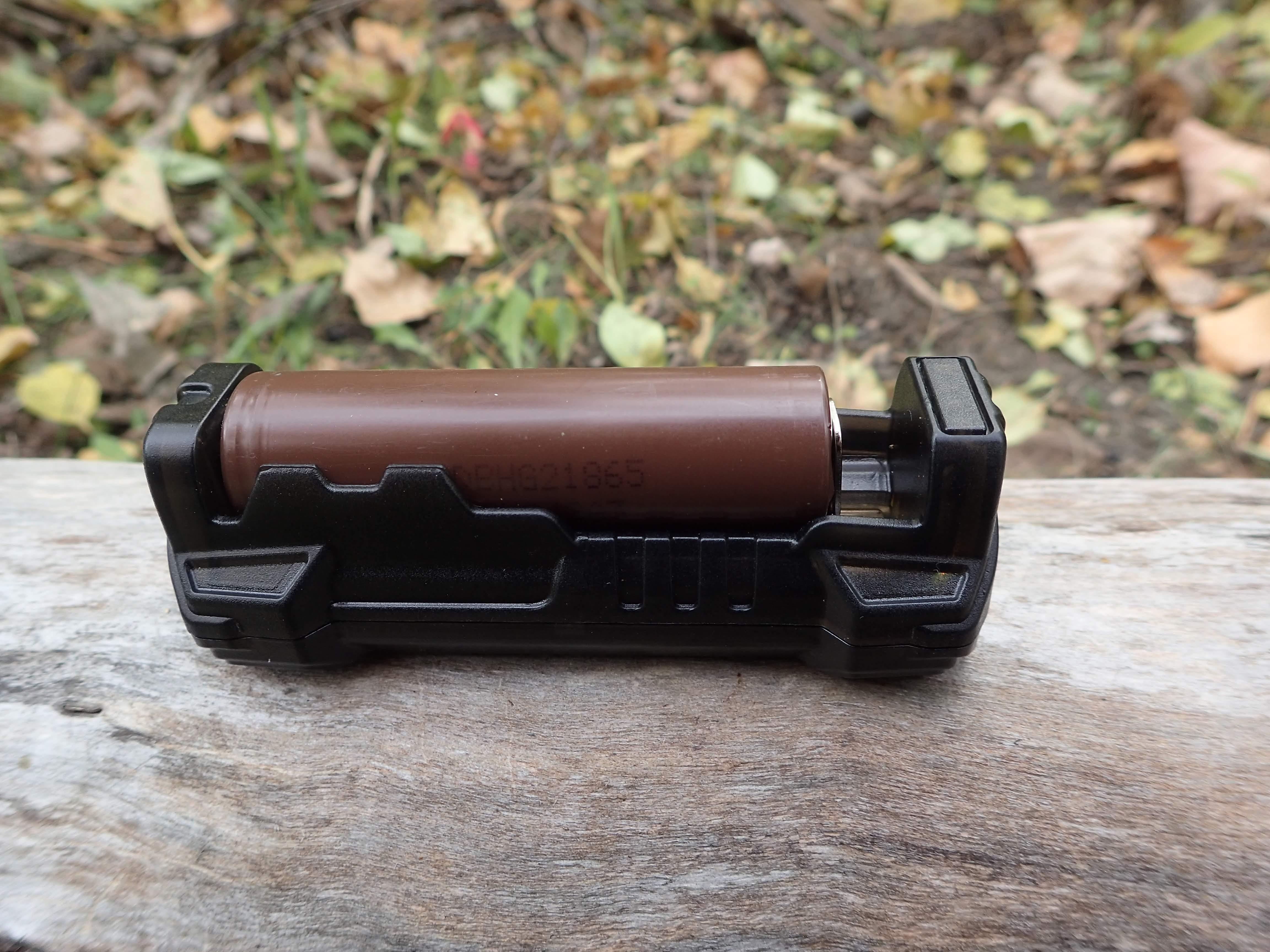 The other interesting design element is the status LEDs. These 4 LEDs are placed at the negative end of the charger, just above the micro-USB power input. They are positioned inside molded channels that serve as light tubes, which allows the charge status to easily be viewed either from the top or the end of the charger. 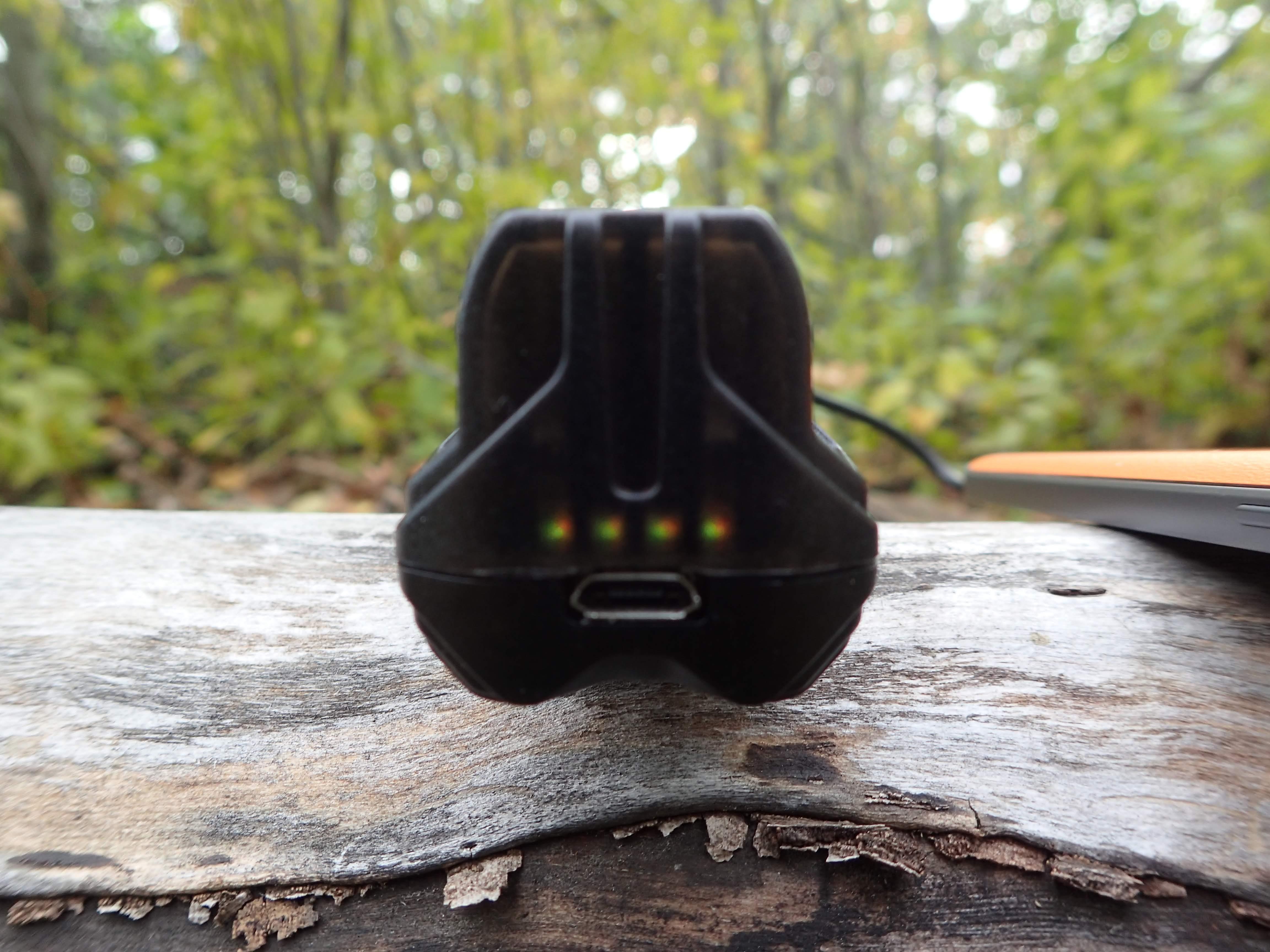 The sides of the charger have a few of the same molded ribs and other design accents as the rest of the charger. These add some grip, but I don’t think most people will be holding the Handy for too long. From the side, you can get another view of those wings as well. 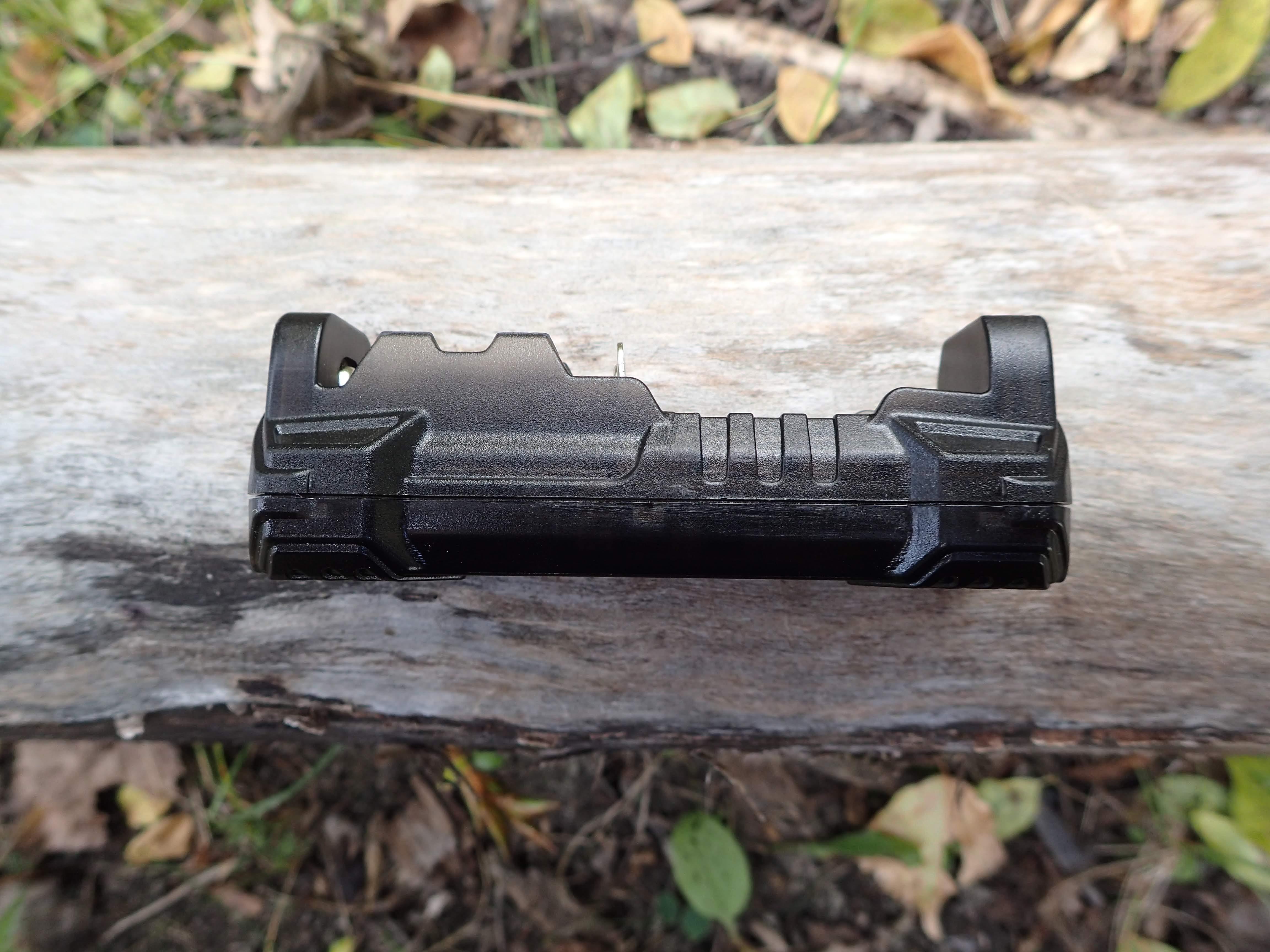 At the positive end of the charger, there’s the USB-A port for powerbank use, and not much else. 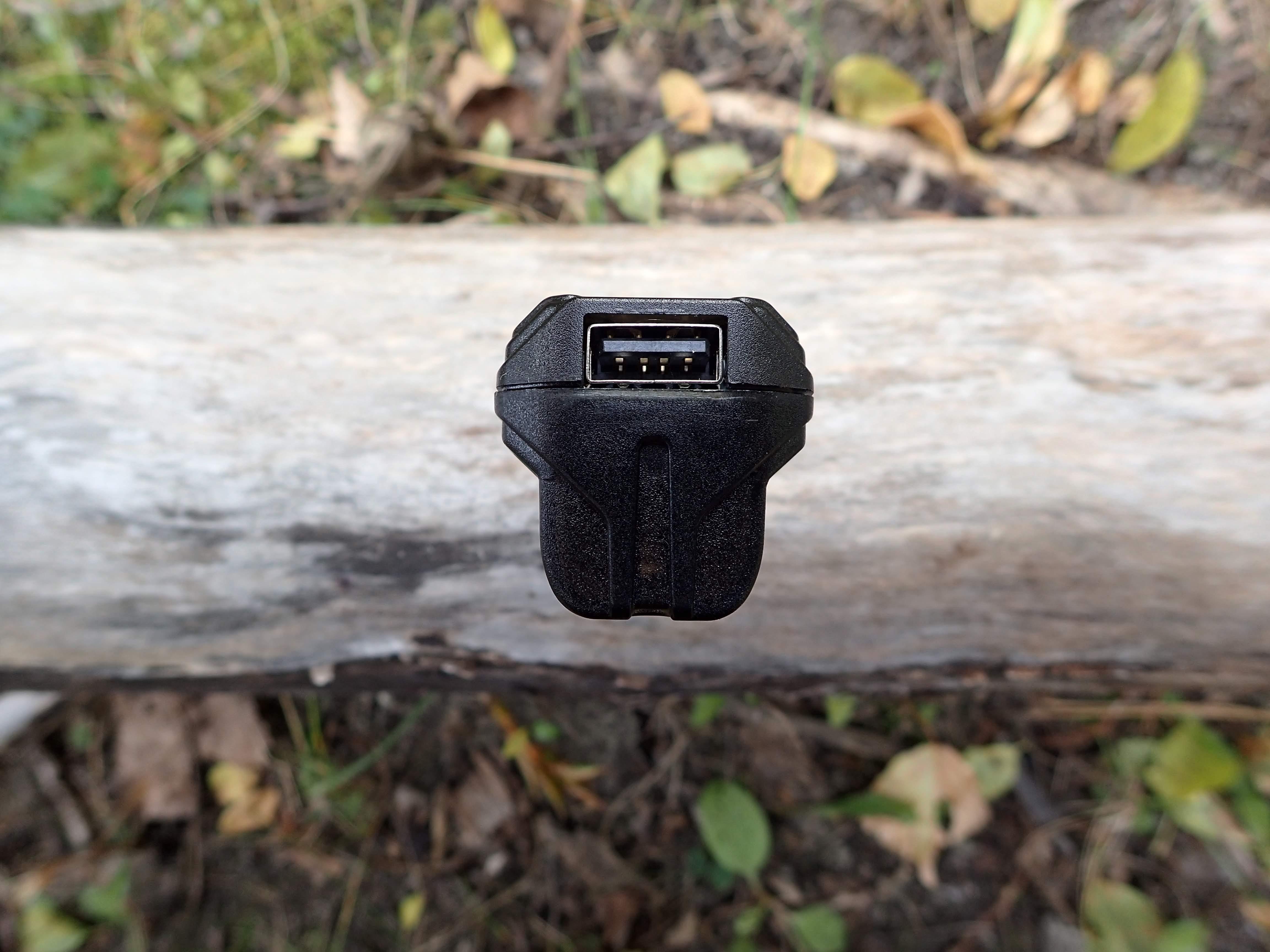 The bottom of the charger holds a lot of the important labeling. The two USB ports are labeled with molded “OUT” and “IN” text. There’s a large sticker covering most of the base. In addition to the usual regulatory signs and the product name, this sticker has the supported input and output currents and voltages. Most notable is that this is the only indication on the charger itself that NiMH cells are supported. 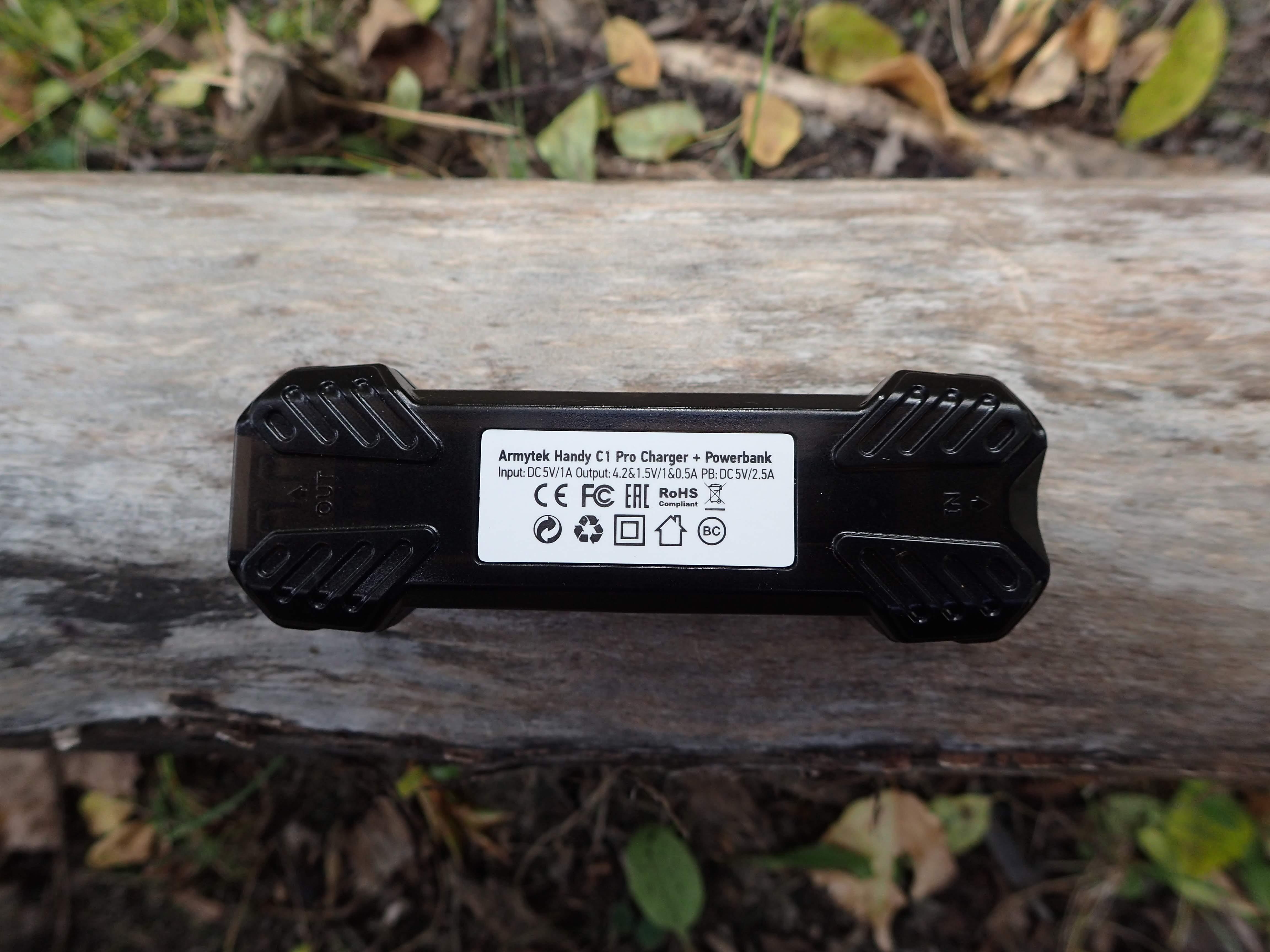 The charger came in a retail-ready box with a hang tag and an info label sticking out on the right. Inside, a thin foam bag kept the charger safe. The only accessory included is a micro-USB cable. I’m glad to see the included short cable - I find these very useful, and great for tossing into a bag without having to worry about it getting tangled or taking too much space.

This is exactly the sort of simple charger I love to use. Plug it in and toss in a cell, and the charger will start at the correct voltage. There are 4 simple LEDs that indicate charge status.

I tested the charger by charging a Samsung 30Q twice and measuring the current and voltage supplied to the charger. In both tests, current climbed gradually from about 0.75 A to 0.9 A, before going into a CV to top off the cell. Charging terminated at 4.16 V and 4.17 V, which is good. The curve does show the current ‘pulsed’ slightly during the charge, and I’m not sure why that is. All I can say is the cell did not get warm, and overall this seems like a solid charger for Li-Ion cells.

I charged an 800 mAh Ikea Ladda cell in the charger. Measuring from the USB input again, current into the charger was just below 0.2 A. After charging, the resting voltage of the cell was at 1.38 V.

It’s not clearly listed on the product page, but powerbank functionality only works with Li-Ion cells. This makes sense. To use this feature, simply insert a cell and plug in the device you want to charge. The status LEDs will show the charge remaining in the cell. 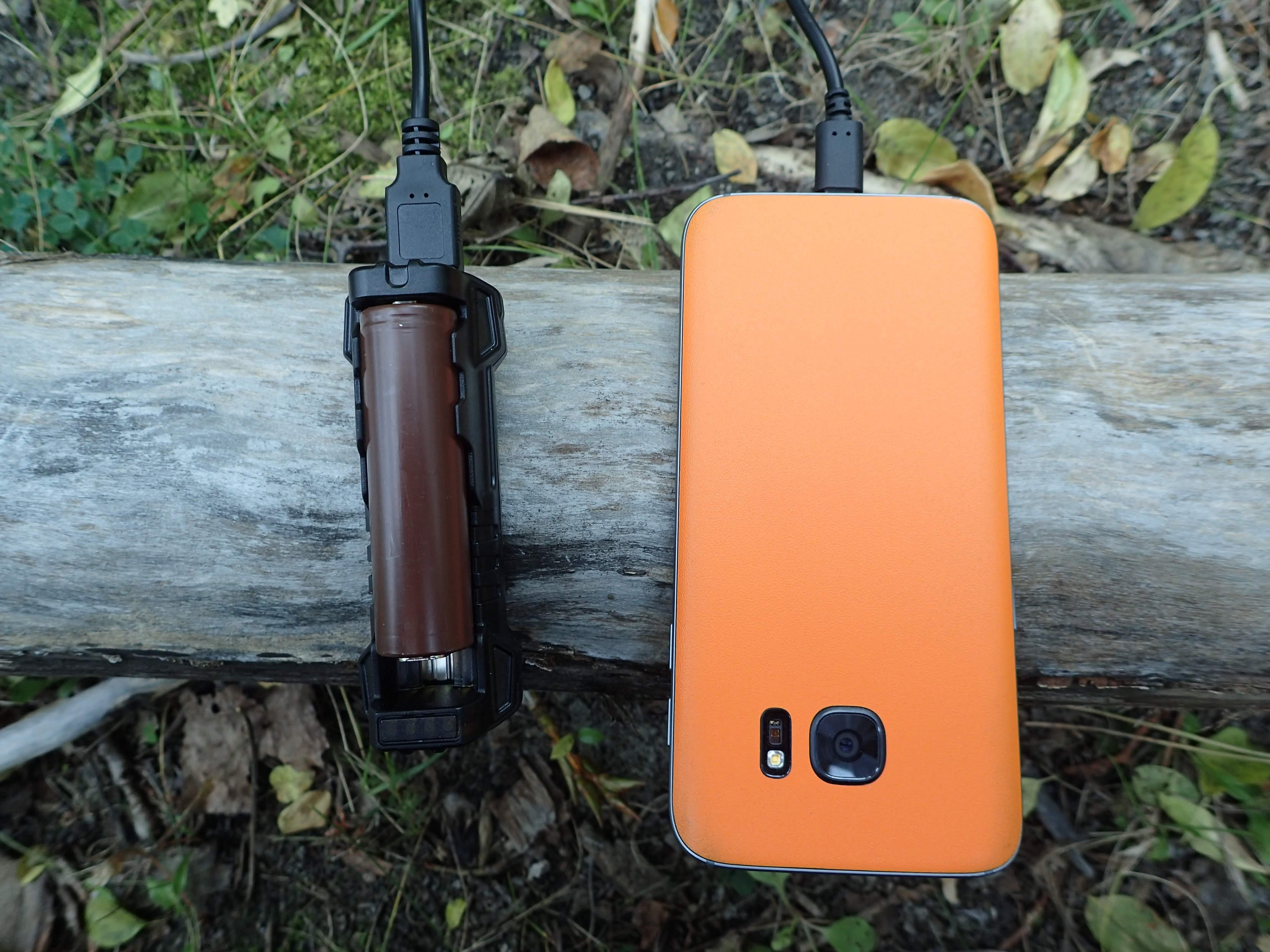 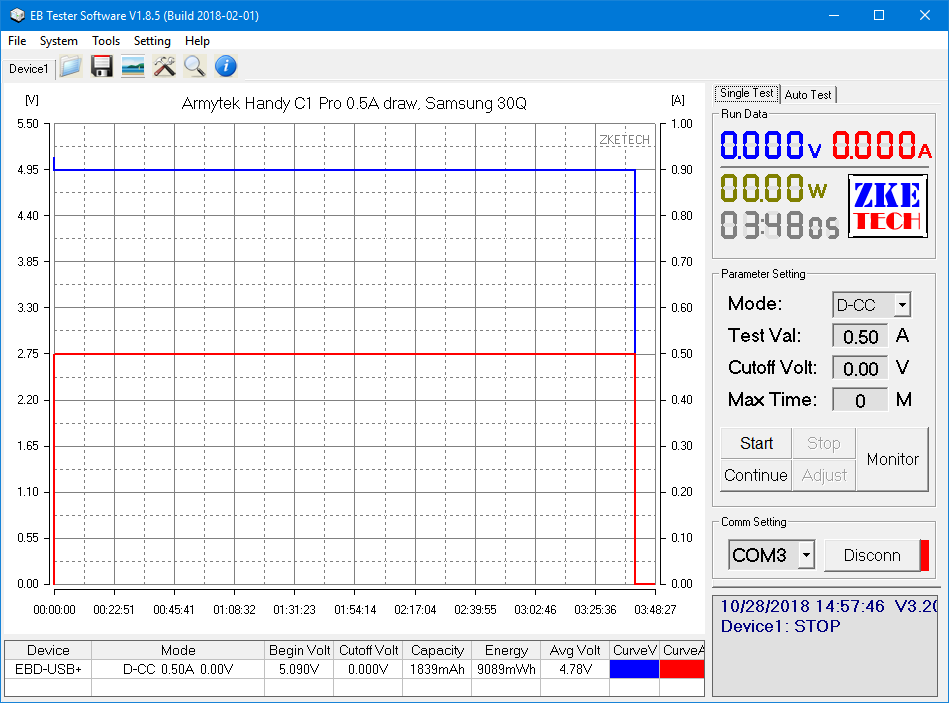 Drawing a higher 2.0 A current, the voltage was largely the same, still staying close enough to spec. Total power delivered was a slightly lower 8.129 Wh. Resting voltage at the end of the test was 3.22 V. 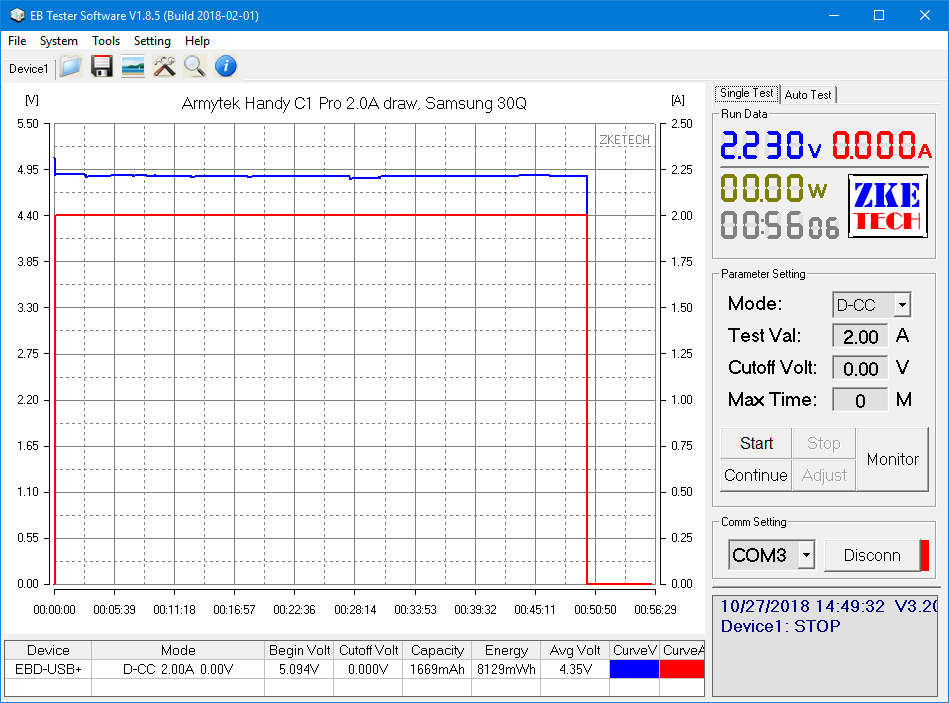 Armytek claims a maximum current draw of 2.5 A is supported. Testing increasing current shows the device can actually deliver 2.6 A, but shuts off when I tried to pull 2.7 A. The powerbank started charging even at a relatively low 0.1 A draw. Voltage is very respectable across all currents. This is a very good powerbank, and I really can’t find any flaws with it. 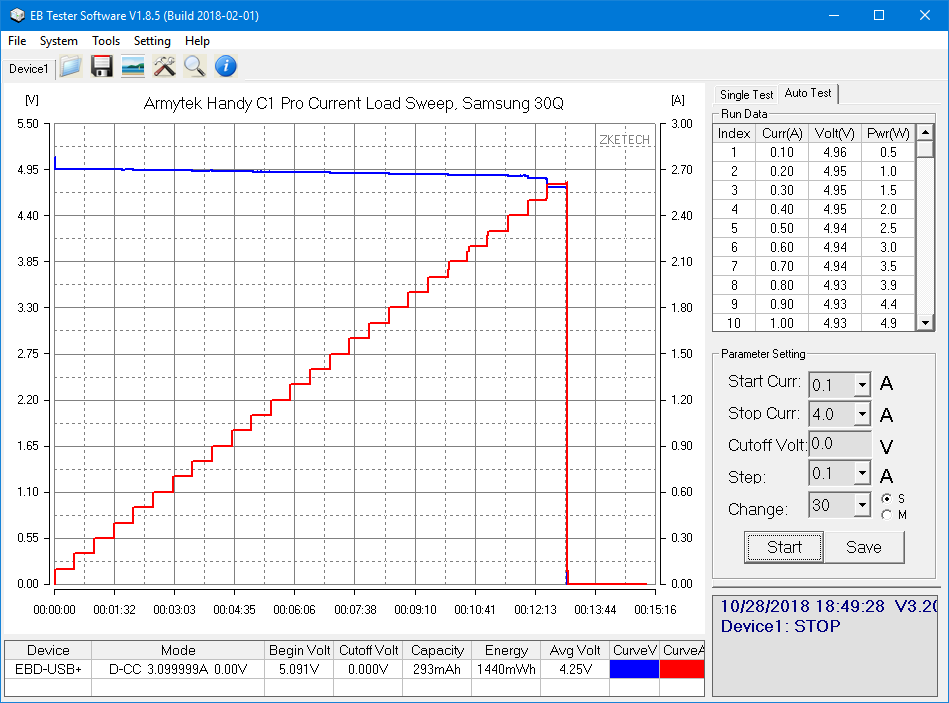