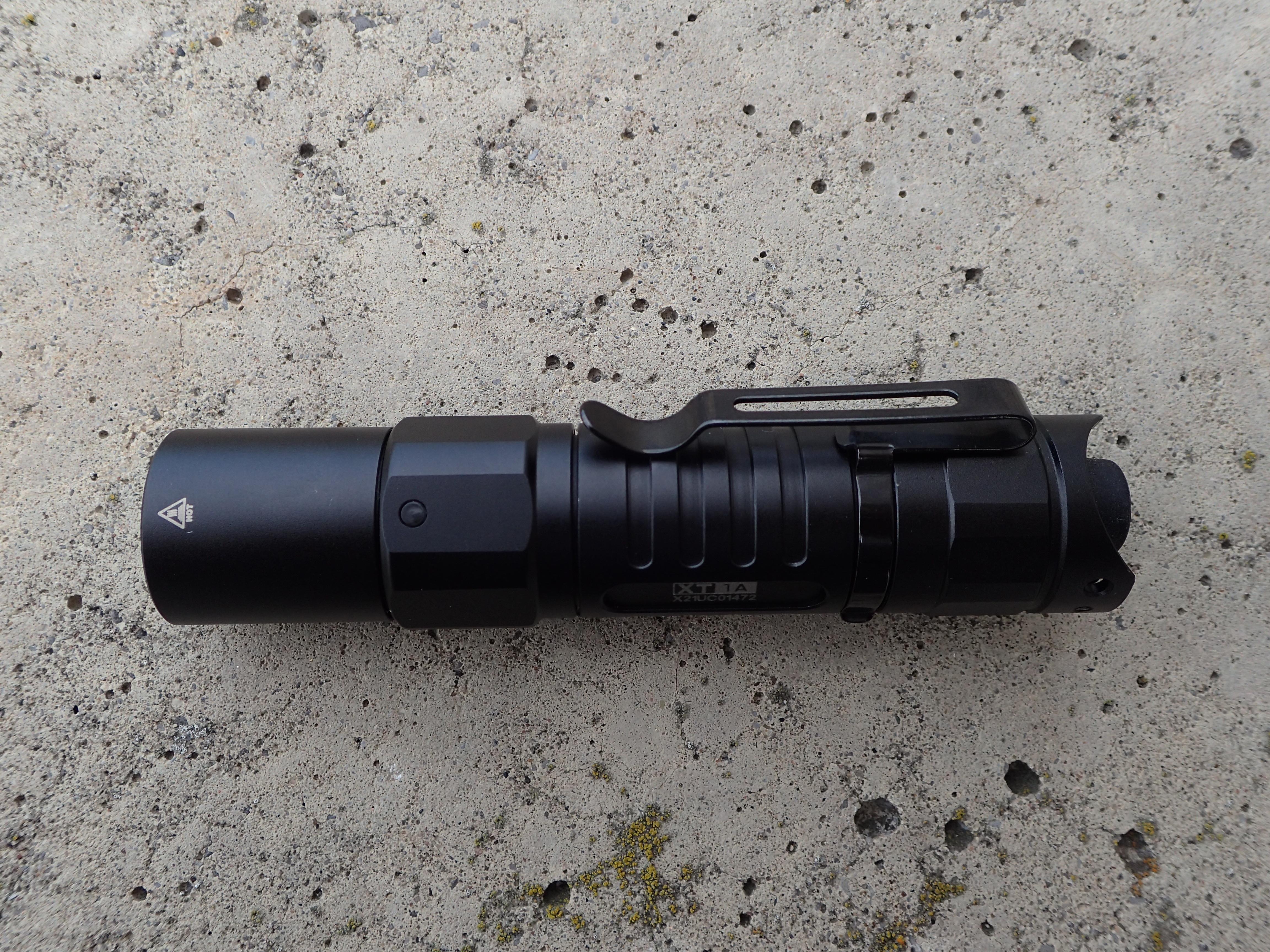 Today I’m taking a look at the Klarus XT1A (2018). This is a light that runs on a single AA or the included 14500 cell. The light uses a Cree XP-L HD emitter, and has two separate switches on the tail. The included 14500 has built in micro-USB charging. This light claims a maximum output of 1000 lumens, which is quite high compared to other AA or 14500 options. Note that there's an older, and much different, version of the XT1A that Klarus makes as well.
This light was kindly provided by GearBest, and is available from them by following this affiliate link.

I was excited to try out this light thanks to two features that make it stand out from the competition - the huge output for the form factor, and the dual tail switch.
The dual tail switch is great. In the outdoor mode, it gives quick access to momentary high, momentary low, constant high, and constant low. In a pocket sized light, momentary access to two commonly used modes is great for pulling it out and taking a quick peek at something, whether it’s finding some socks in the morning, looking for the keys you dropped, plugging in a cable under a desk.
The output on the light is definitely high, but the light is much larger than most AA offerings, and even larger than some 18650 lights. This probably necessary to make the dual tail switch work, but it makes the high power less impressive. I also noticed some flickering on the highest mode.
I’ll also note that being able to quickly charge the cell with a micro-USB cable, which I’m likely to have with me everywhere I would need to top it off, is very convenient.

This light is certainly large. It’s both wider and longer than other AA lights I have, and even larger than some 18650 lights - although those don’t offer the dual tail switch setup this light does. I measured it at 108.5 mm long, and 23.4 mm at the widest point (the hexagonal portion just behind the head).

This light is large, but it feels extremely solid as a result. The bezel, like the rest of the light, is made from black anodized aluminum. It’s smooth without crenelations, and has a ‘hot’ warning etched into the coating. The opposite side of the light has some regulatory markings, which aren’t shown in the image. Looking just further down the light, you can see the larger hexagonal portion behind the head that works as a great anti-roll feature. The small circle on that section is a status LED that will turn green, yellow, or red when the light is switched on to indicate cell voltage. 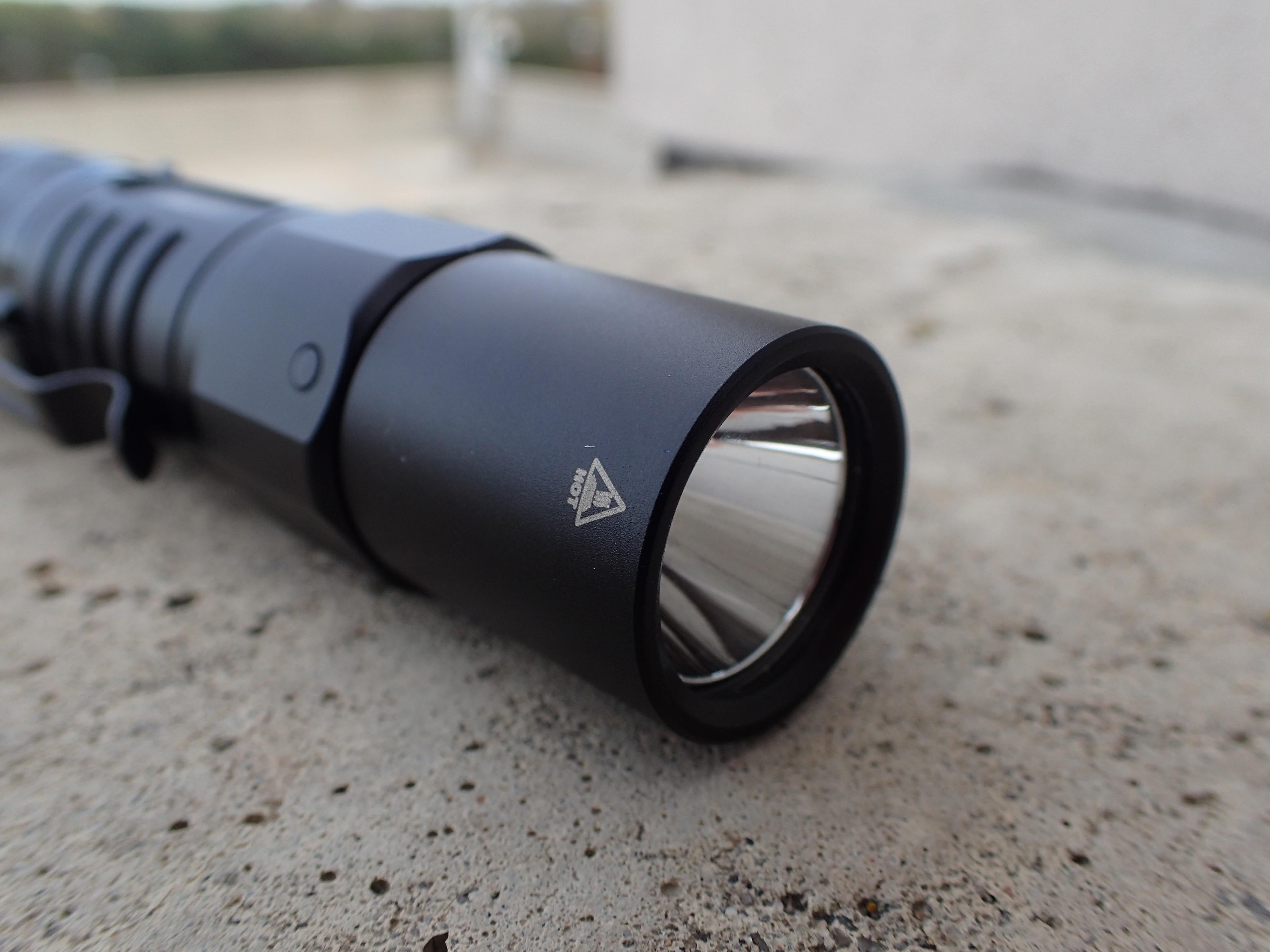 The body of the light is devoid of any traditional knurling, but there are some grooves cut in for grip. One side has the model name and serial number etched into the coating, and the opposite side has the brand name. Towards the tail, there’s a single groove for the tail clip. 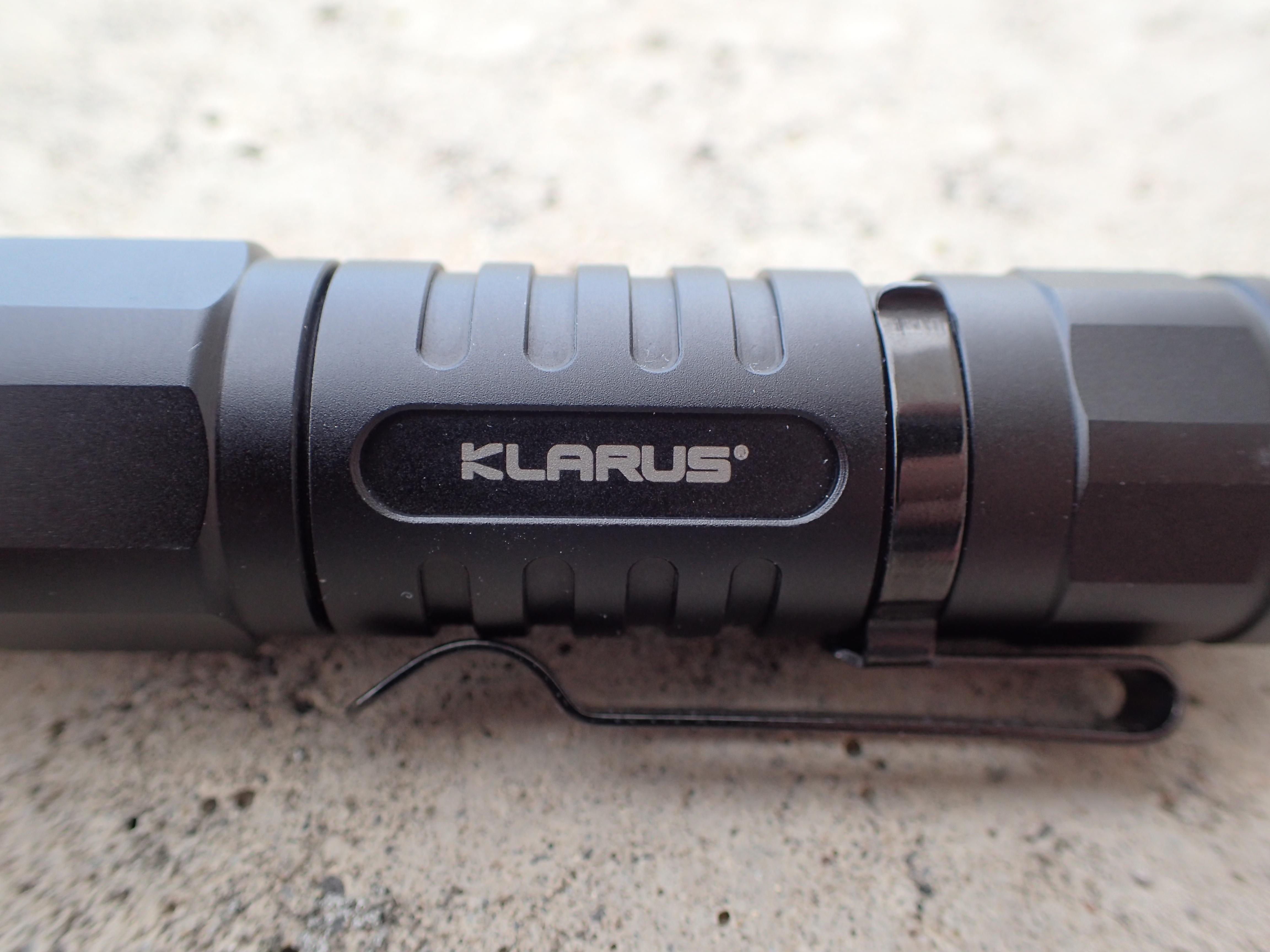 The tail is where this light’s most interesting feature can be found. There’s a traditional forward clicky switch, but also a paddle switch. The paddle is a steel plate hinged on the two ‘wings’ of the tailcap, which depresses a rubber e-switch beneath it. This tailcap design does mean the light does not tailstand, since the switches are proud of the rest of the tail. 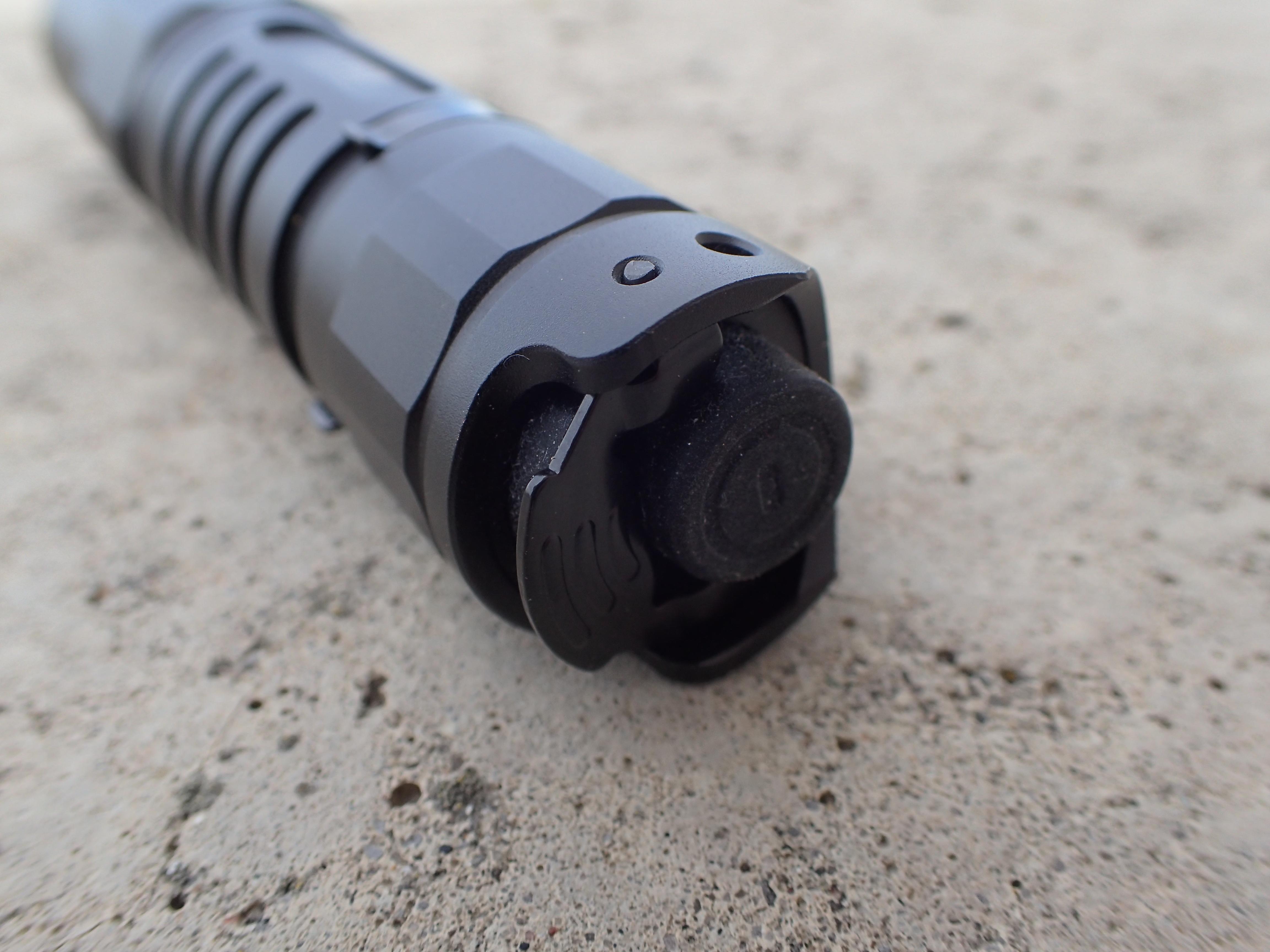 In order to enable the dual tail switches, the tailcap and body of the light can not be disassembled. The cell is inserted by removing the head of the light. The threads are not anodized, but the light can still be locked out with a slight turn. There is a brass button on the PCB for the positive contact. 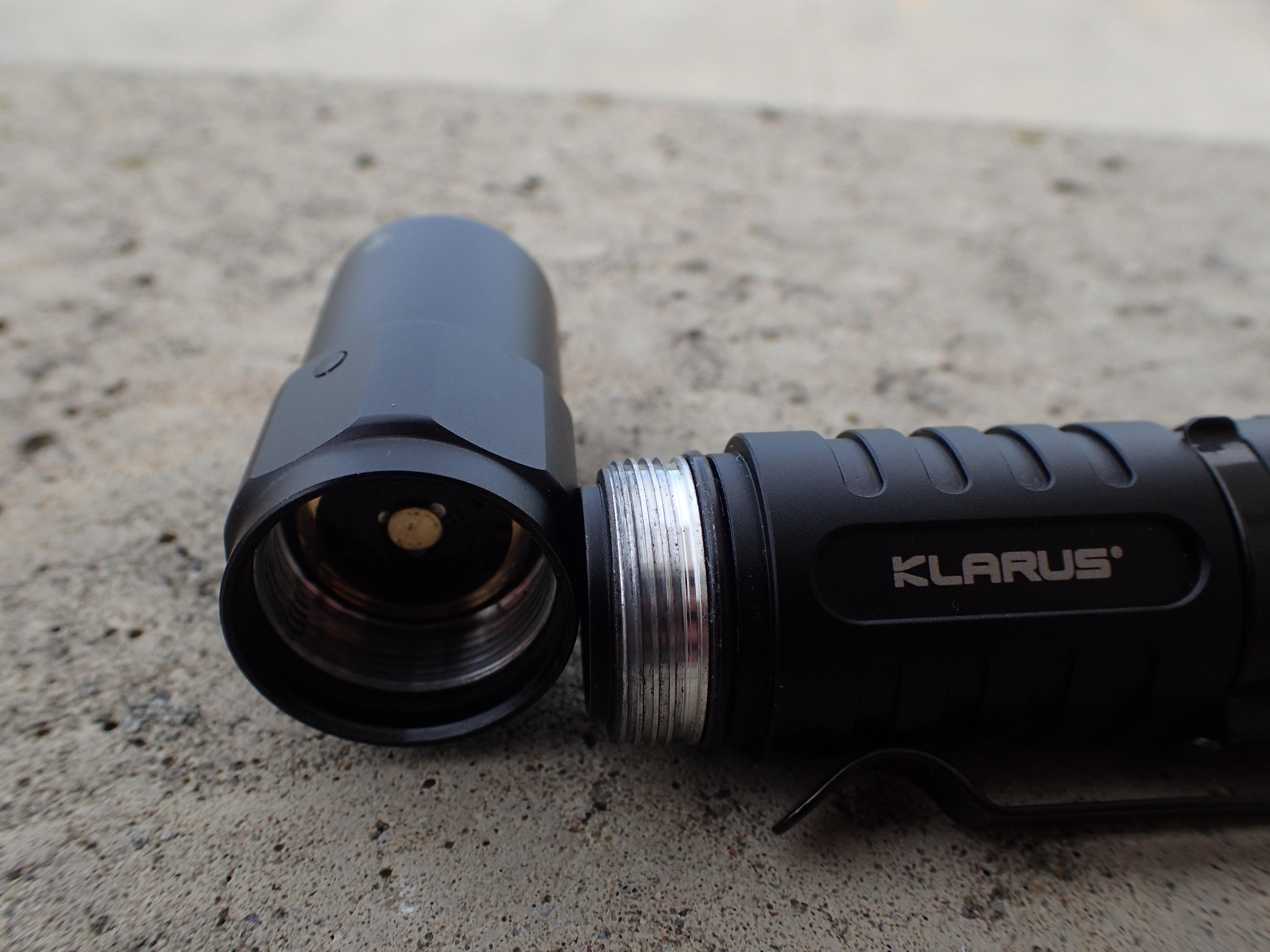 The tube is dual walled so the signal from the switch can be passed forward to the driver. The tail end of the light uses a spring for the negative contact. 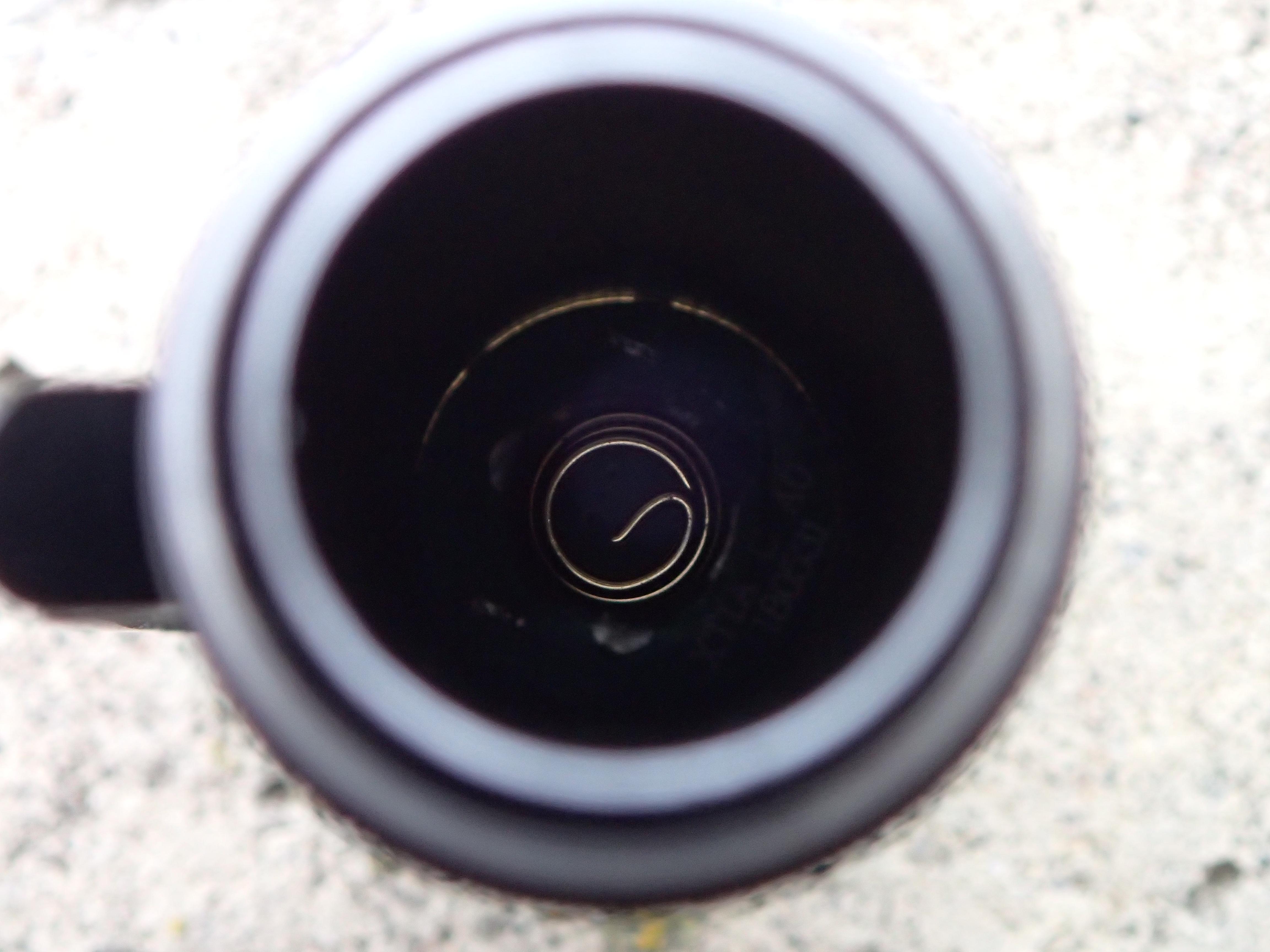 The light ships in a black and red cardboard box. All the accessories and the light are in the box, and the light is held in a plastic cradle. 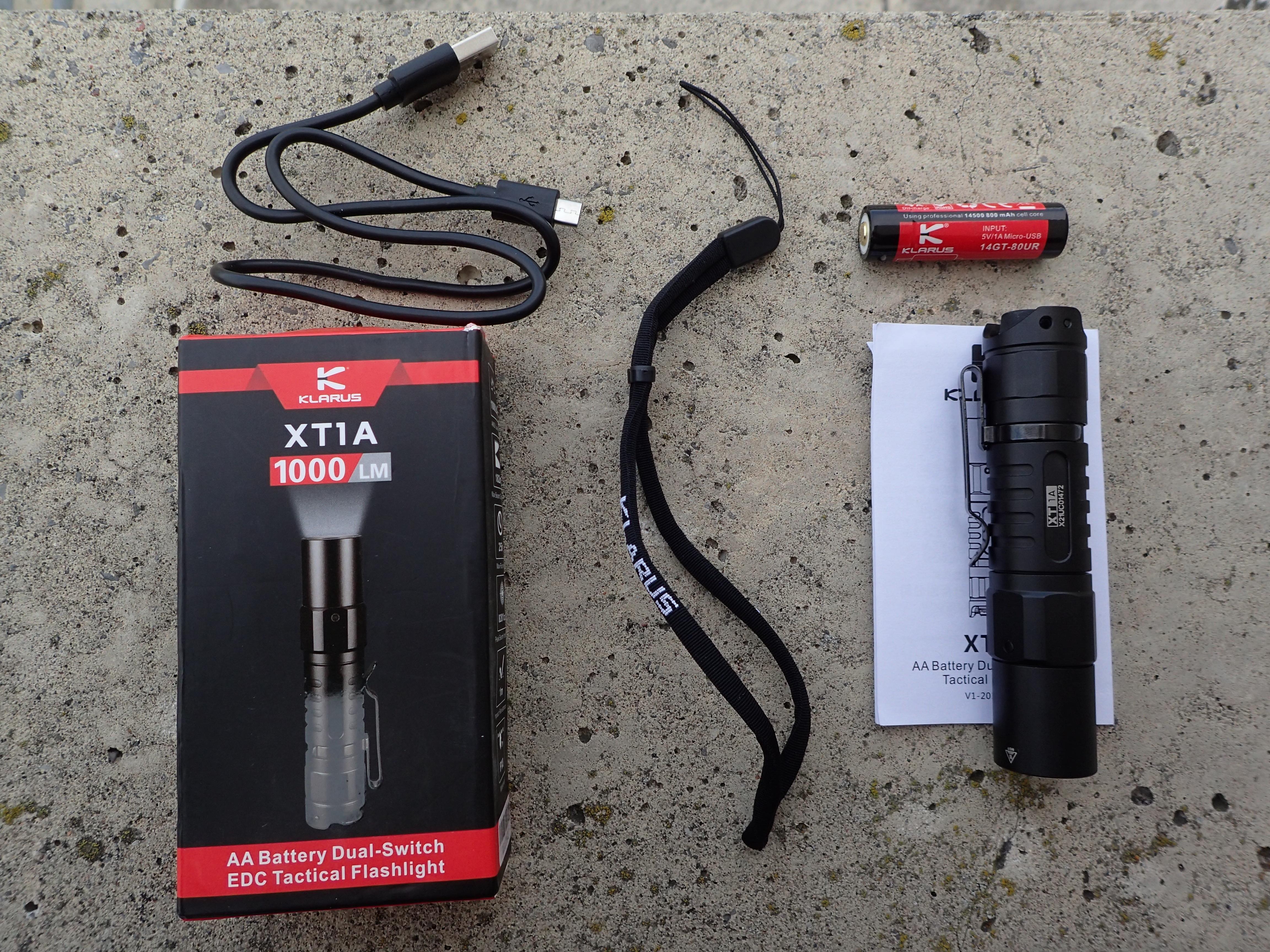 The added size of the light means it fits well in the hand, and tail switches are known for being easy to access with one hand - no complaints about ergonomics with this light. The two tailcap buttons are different in shape, size, texture, and elevation, so it’s easy to tell them apart by feel.
There’s a single hole in the tailcap to attach the included lanyard. The clip can only be attached for head-down carry, and is not particularly deep, but iit does the job well. The shape is good, and I had no issues clipping it on to my pocket.

This light actually has two independent user groups - outdoor and tactical. The light came with the outdoor mode preset, and it’s the one I prefer to use. In the outdoor group, there are 3 modes - low, mid, and high. The UI is as follows:


There’s also the ‘tactical’ UI. This caters to a lot of people looking for a tactical light, but isn’t what I personally want out of an EDC light. In this UI:


This is great for having the most disorienting modes at a single press, if that’s what you need.
One thing that needs to be discussed is the mode spacing - with the included cell, the modes claim to be 5, 80, and 1000 lumens. That’s a huge jump from medium to high. In practice, I really don’t mind this. It really encourages me to use the lower modes, and I find the quick access to both low and high extremely convenient. That being said, I would probably prefer a second ‘mid’ mode be added in there somewhere. With an AA cell, the modes change to 5, 80, and 300, which I much prefer.

The emitter chosen in this light is a, XP-L HD, set in a smooth reflector. There are emitters I like better than the XP-L, but I think it’s a good choice for this kind of light. It has cool white tint, but the beam is quite functional.
One thing to note is I saw some very noticeable PWM on high mode only with both the included 14500 cell and my own NiMH cells. I’ve never seen a light that flickered only on the highest mode, so I don’t really know what the cause is. Since I mainly used the lower modes and only used high for “what’s hiding in that bushes” sort of quick peeks, it wasn’t a total deal breaker - but it is noticeable on my sample for sure.The lower modes were smooth, with no visible flicker or PWM.

With the included cell, the light ran on high well over the hour claimed on the label. There’s a large step down about 10 minutes in, but that can only be expected in a light this size managing the heat from a 1000 lumen output. After that the run was steady at about 40% until it stepped down to a very dim moonlight. In this mode it could be reset to a brighter level, but would quickly drop back down. The test was stopped manually as the indicator LED was blinking rapidly to indicate low voltage. 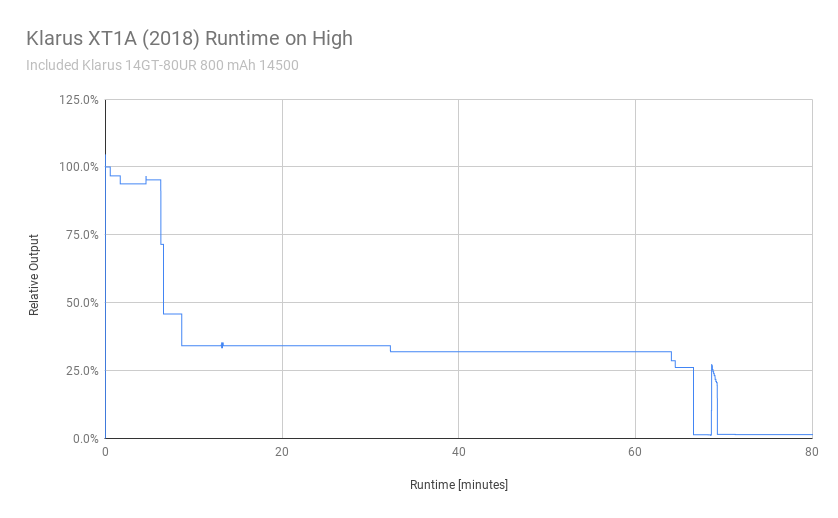 Tests were also run with NiMH cells. Note that the Ikea Ladda cells I used are particularly low capacity, and you can expect much longer runs from higher capacity cells. The runtime on high bounced around a bit, it looks like the driver had some trouble pulling the power it needed from the cell used. On medium, the output is perfectly steady for over an hours before stepping down to low, finally dying after about 2.5 hours. This is really great performance, given the lower capacity of the cells used. 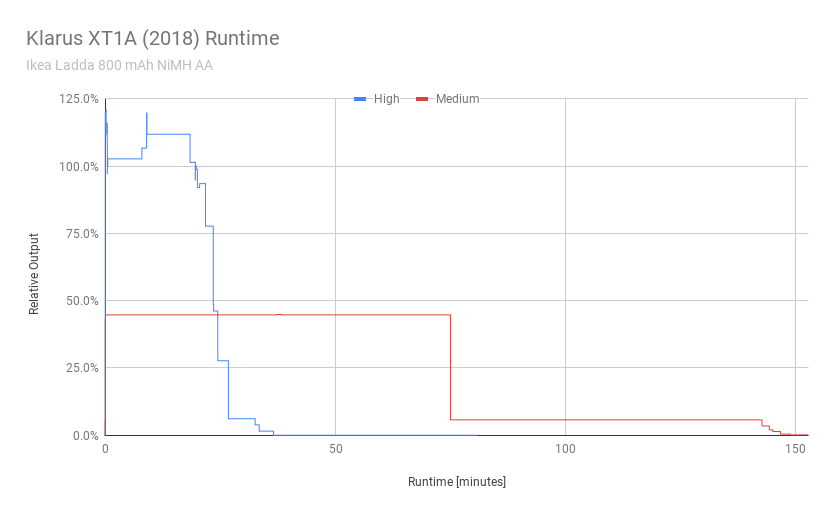 The included cell has a handy micro-USB port built in to the cell itself. Charging from a dead cell took just over 3 hours to complete, and ran at just over 0.3A. This is a low charge current, but it’s safe for this smaller cell, and will help maintain the cell capacity. I would say this is a good charge curve. Note that the voltage displayed on the graph below is measured at the USB input, not at the cell terminals, and is basically meaningless. 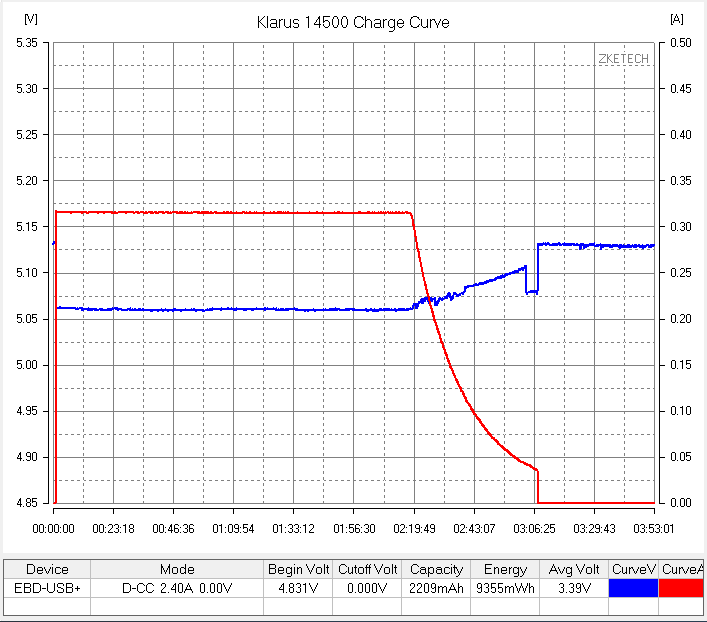