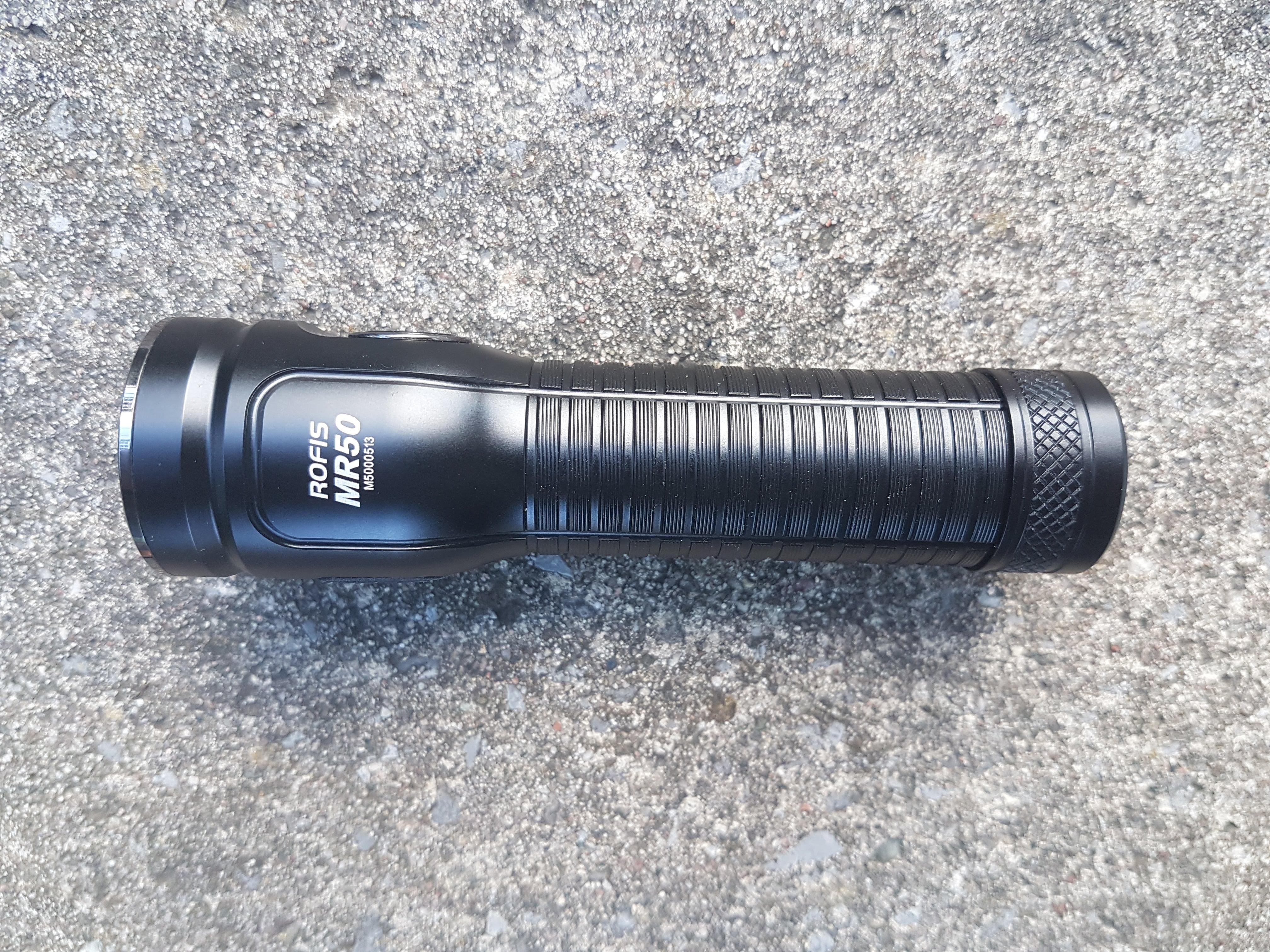 This is the Rofis MR50, the second light sent to me from this manufacturer. As with their R3, this light breaks tradition and adds in some extra functionality - in this case, powerbank functionality over the micro-USB port. The light itself runs off of a 21700 cell, and uses a Cree XHP50.2 emitter.
The MR series also includes two other lights - the MR70 uses a larger 26650 cell and features a secondary emitter, and the MR30 is the newest addition and has a more compact tube shape.

I’m confident to say that this product is one of the best and more versatile powerbank/flashlight combinations on the market. Despite the larger 21700 cell, the smooth body shape and finish mean it can actually slide into a pocket and be carried there with relative ease. The curved unibody head is something that I wish more lights had.
That being said, the flashlight side of operations could really be improved. The UI has no moonlight or very low mode, and not even a shortcut to the lowest available mode. After loving the UI on the Rofis R3, I know the company can and does make better interfaces, and I would love to see an update to the way that the modes on the MR50 are accessed. The sample I tested also had issues with drastic step downs from turbo.
On the powerbank side, I would love to see an upgrade to USB-C in the future. Micro-USB is becoming a bit dated in general, but I think a product like this would have a special benefit to using this newer protocol. USB-C supports both power in and out, which would eradicate the need to carry around a separate dongle just for powerbank use.
Despite these complaints, this is still one of my favorite powerbanks, and I have quite a few. It’s a great ‘just in case’ item to keep in a backpack or jacket.

There are a few things about the design of this light that make it instantly stand out. First, the head and body are a single piece of aluminum, giving it a very solid feel. Secondly, the head has a gently curve down to the narrower diameter of the body tube, as opposed to cutting inwards sharply. This gives the light a smooth feel, and really helps make it easy to slide into or out of a pocket. Size-wise, the light does a great job of keeping it’s length down despite the on-board charging and larger cell.
The light uses a fairly deep reflector with a light orange peel texture. There’s a stainless steel bezel holding the optics in place, which is a great feature to protect the softer aluminum used for the body. 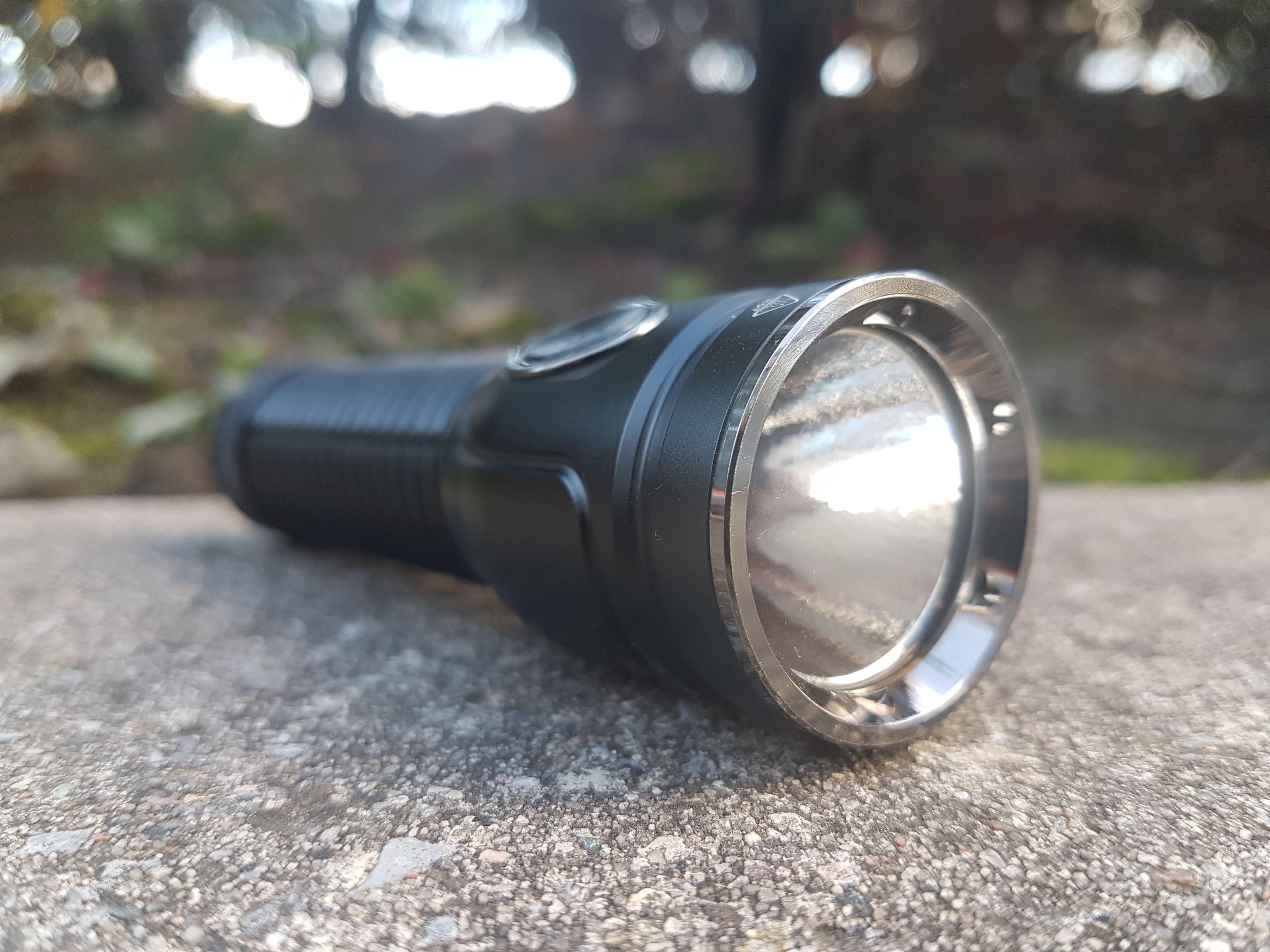 Lower down on the head there’s a button held in place with another stainless steel ring. The button has a smooth texture and is concave, as opposed to the more common rubber domes that we see on a lot of side switches. It’s a good switch, and easy to identify by touch. 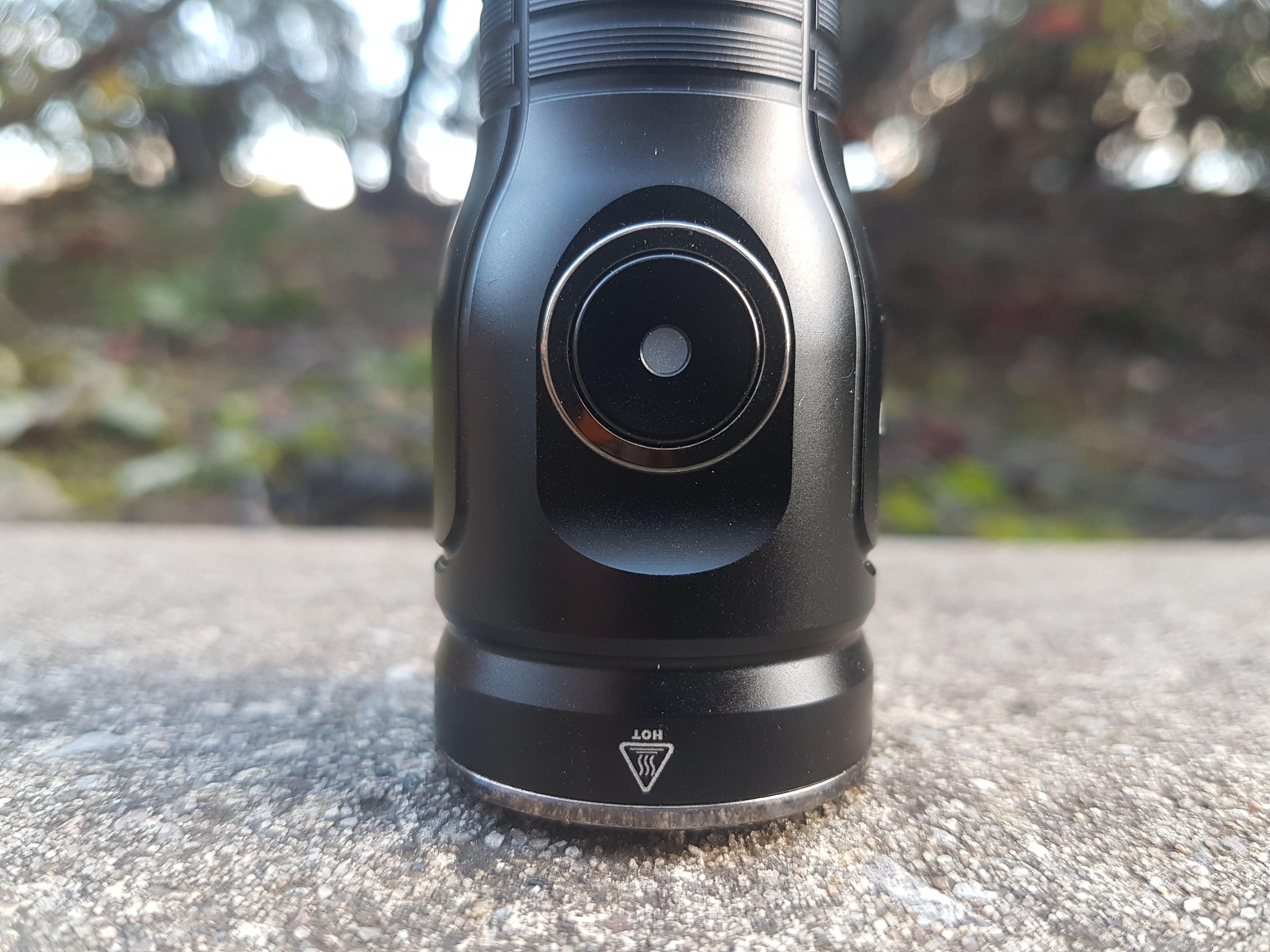 Opposite the switch, a rubber flap serves to protect the micro-USB port from dust and water. This port is used for both power input for charging and power output for powerbank use, with the included USB-OTG cable. You can see a bit of the light’s internals by peeking around the USB port, so the port itself is likely not waterproofed, and the protection is reliant on the rubber cover being placed correctly. As such, I probably wouldn’t suggest any extended submersion of this light. 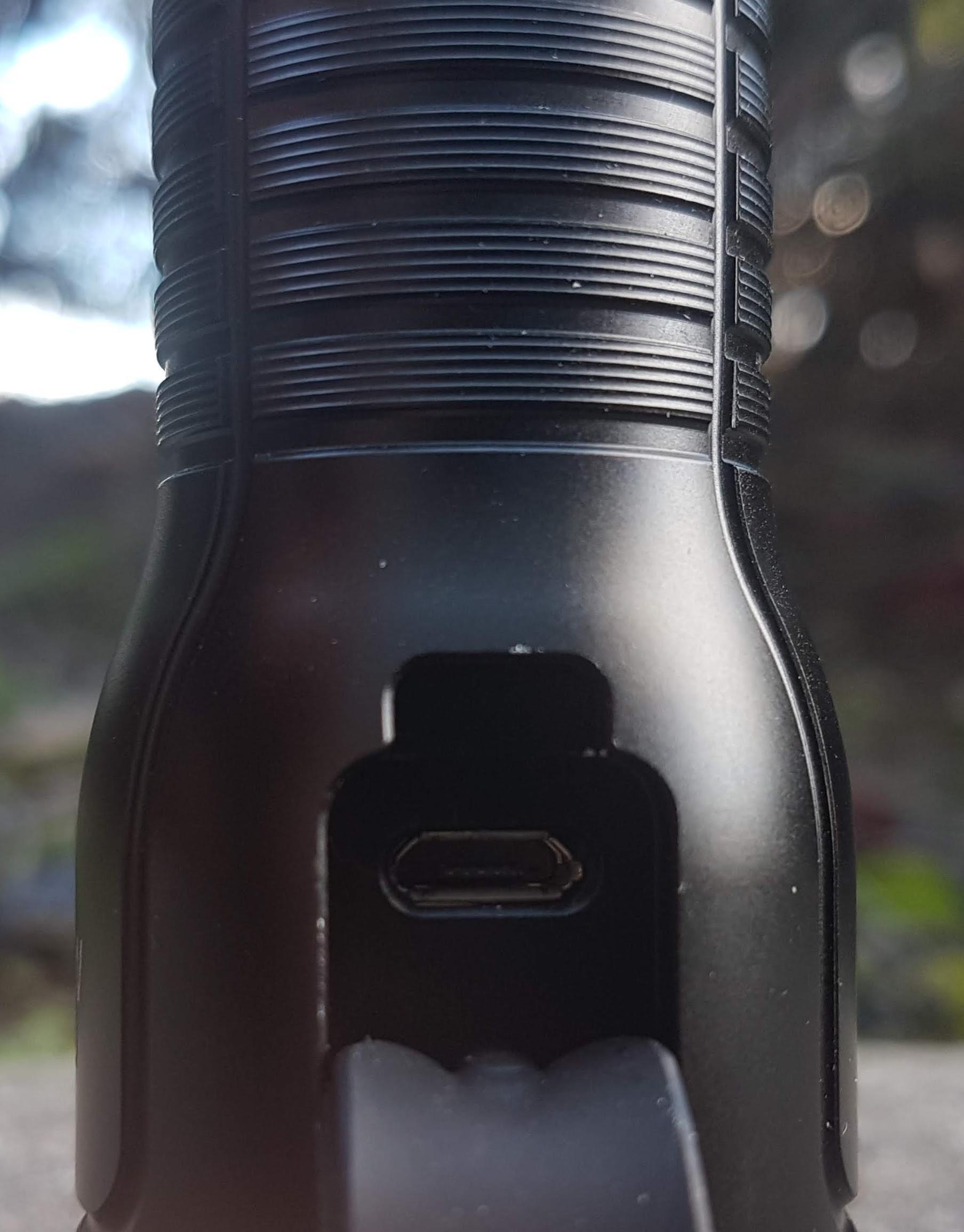 Between the switch and the charging port, one side of the light is black and the other has the manufacturer name, product name, and a serial number lasered into the black anodizing. The anodizing is smooth, and feels well done. Along the body, there are 4 grooves cut in for styling and grip. The cell portion of the light also has larger grooves and smaller texture cut in to it for grip, with the smaller texture almost resembling a fine threading. The features provide a good grip overall.
The tail cap of the light is flat and plain, giving a great surface for tailstanding. Around the tailcap is the only actual knurling present on the light. It’s flat and not very deep, but should be enough to get a good grip if you need to change out the cell. There’s a hole in the side of the tailcap, allowing lanyard attachment without compromising the ability to tailstand. 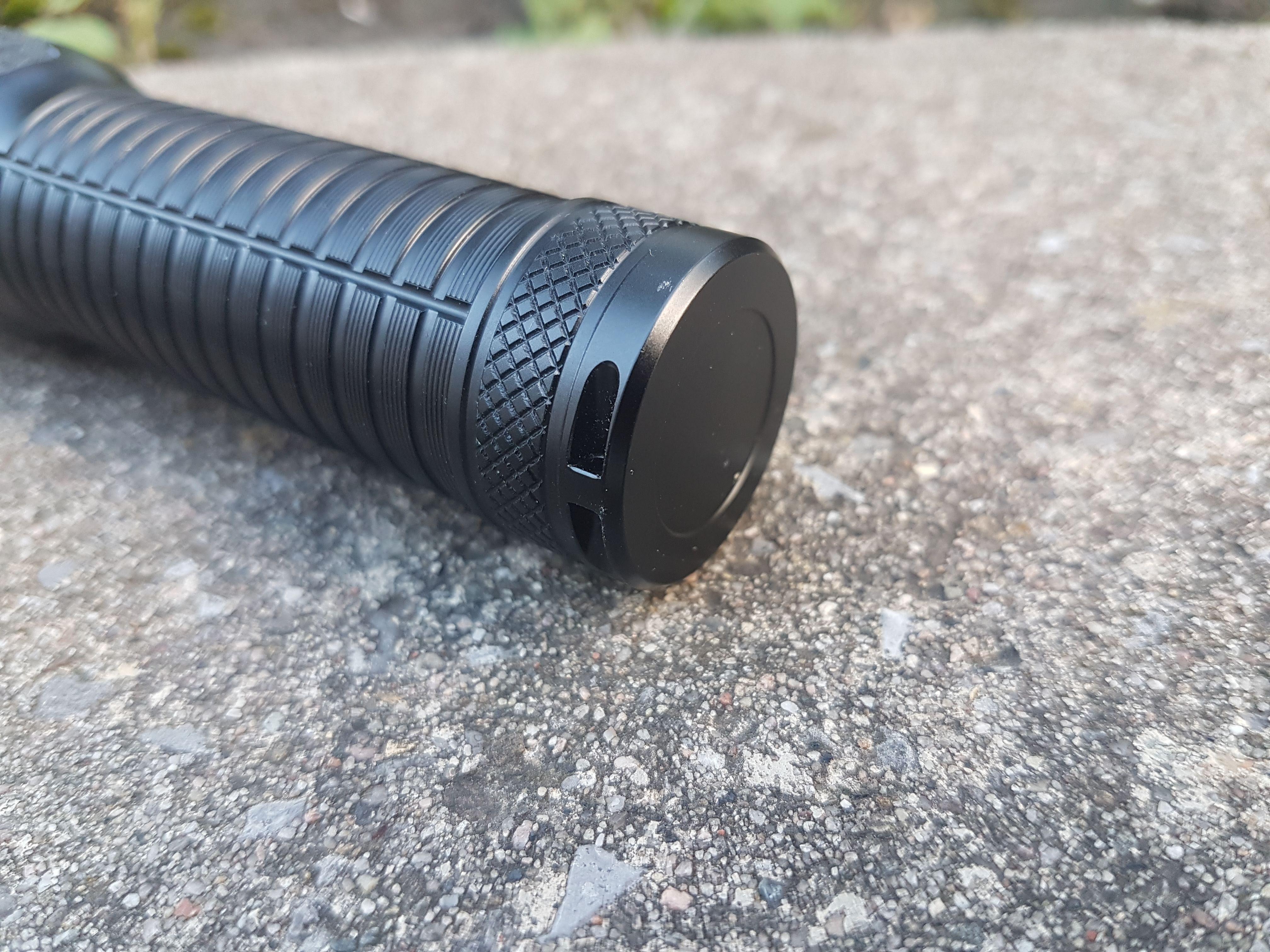 Inside the tailcap, there are two large springs serving as the negative contact of the light. Interestingly, the larger of the two springs looks to be pressed into the tailcap, and the smaller of the two looks to be held in place just by being nested inside the larger. The threads on the tail are cut well, with a thin square profile. These are anodized, so the light can be physically locked out with a small twist. 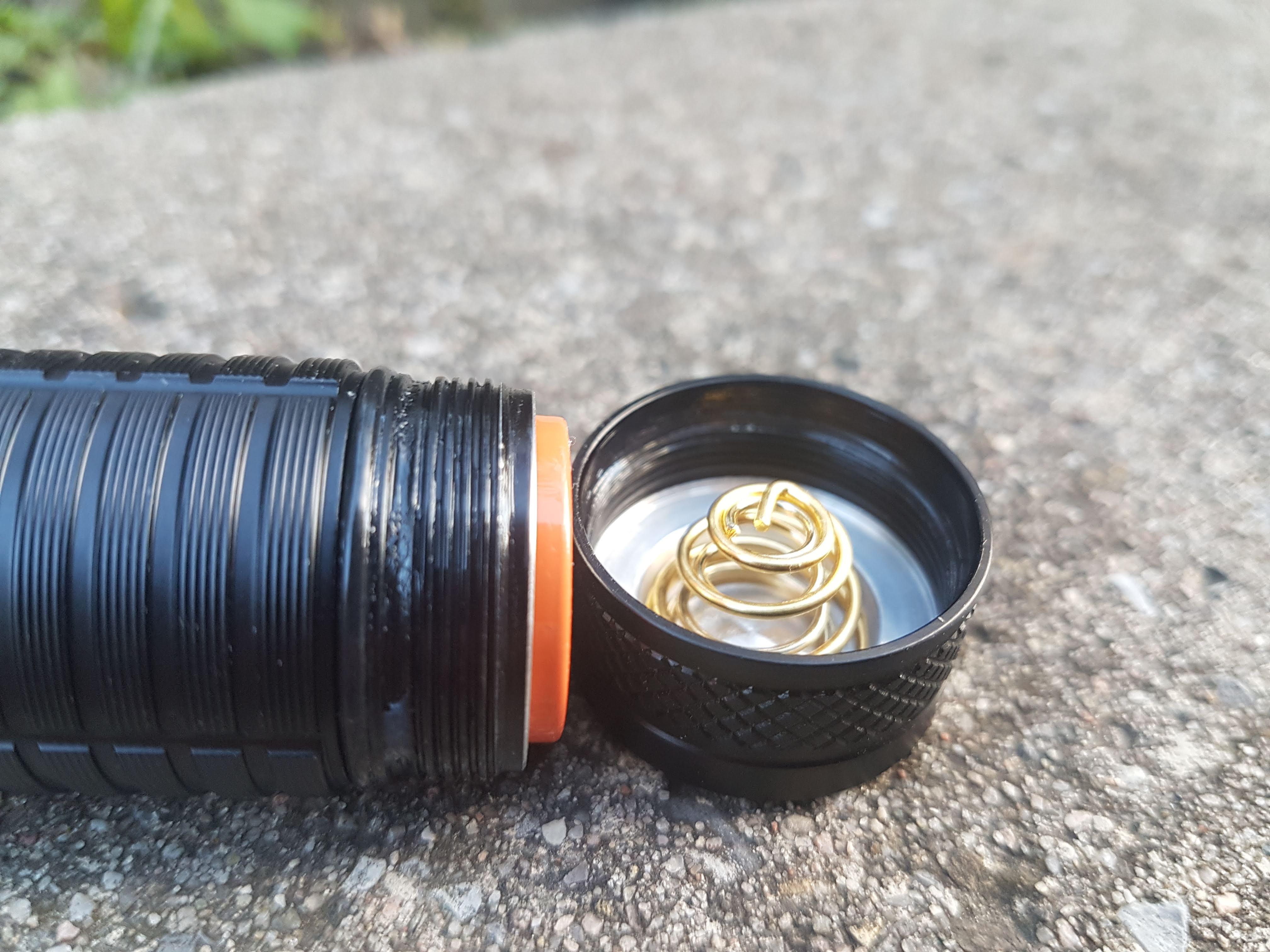 Looking down the cell tube, it can be seen that the positive contact of the light uses a springy button for contact. Some of the driver components can be seen as well. 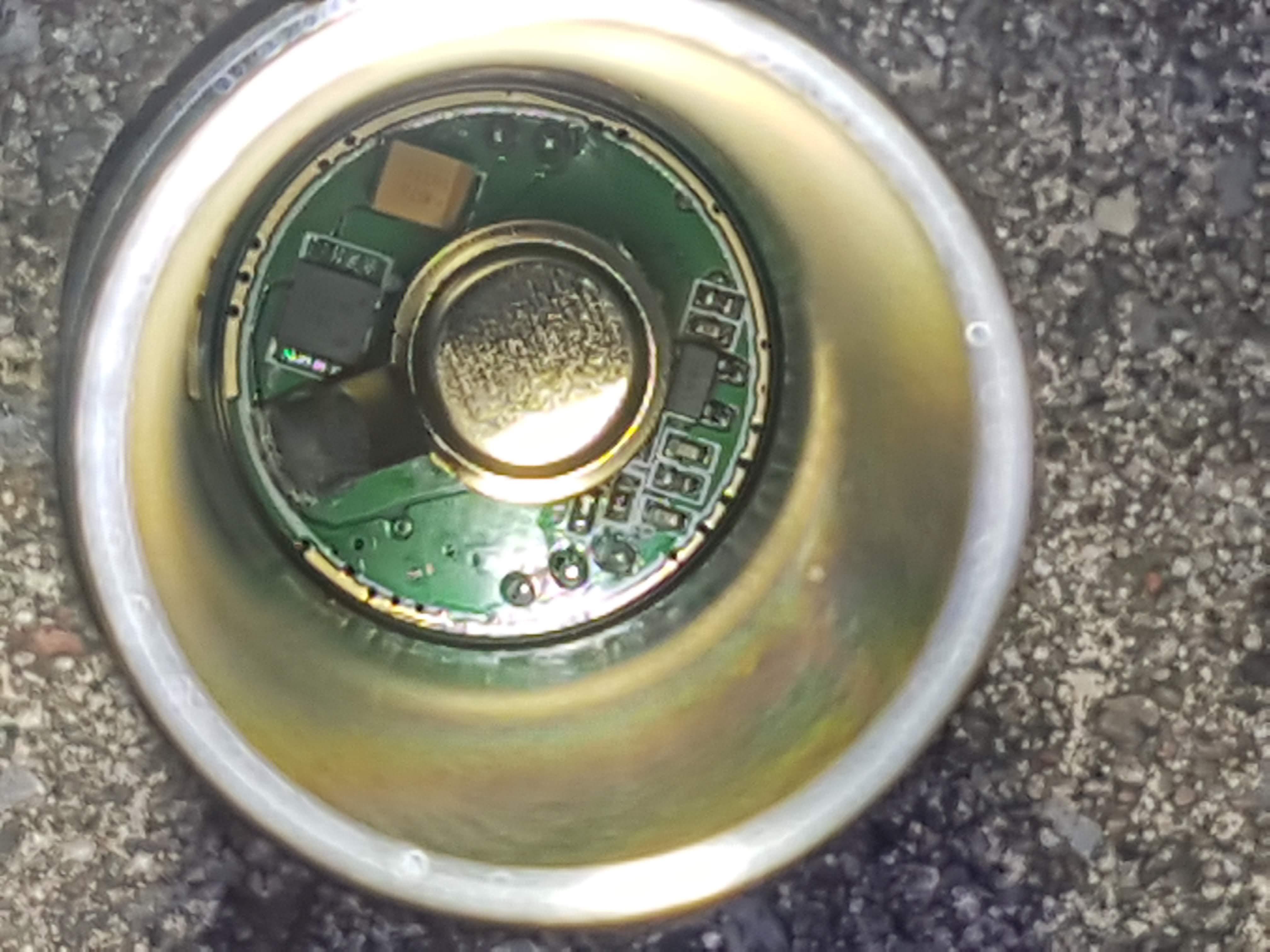 Once again, Rofis ships the light in quality packaging with a little window to show the product itself. Inside, there’s quite a bit of included kit. 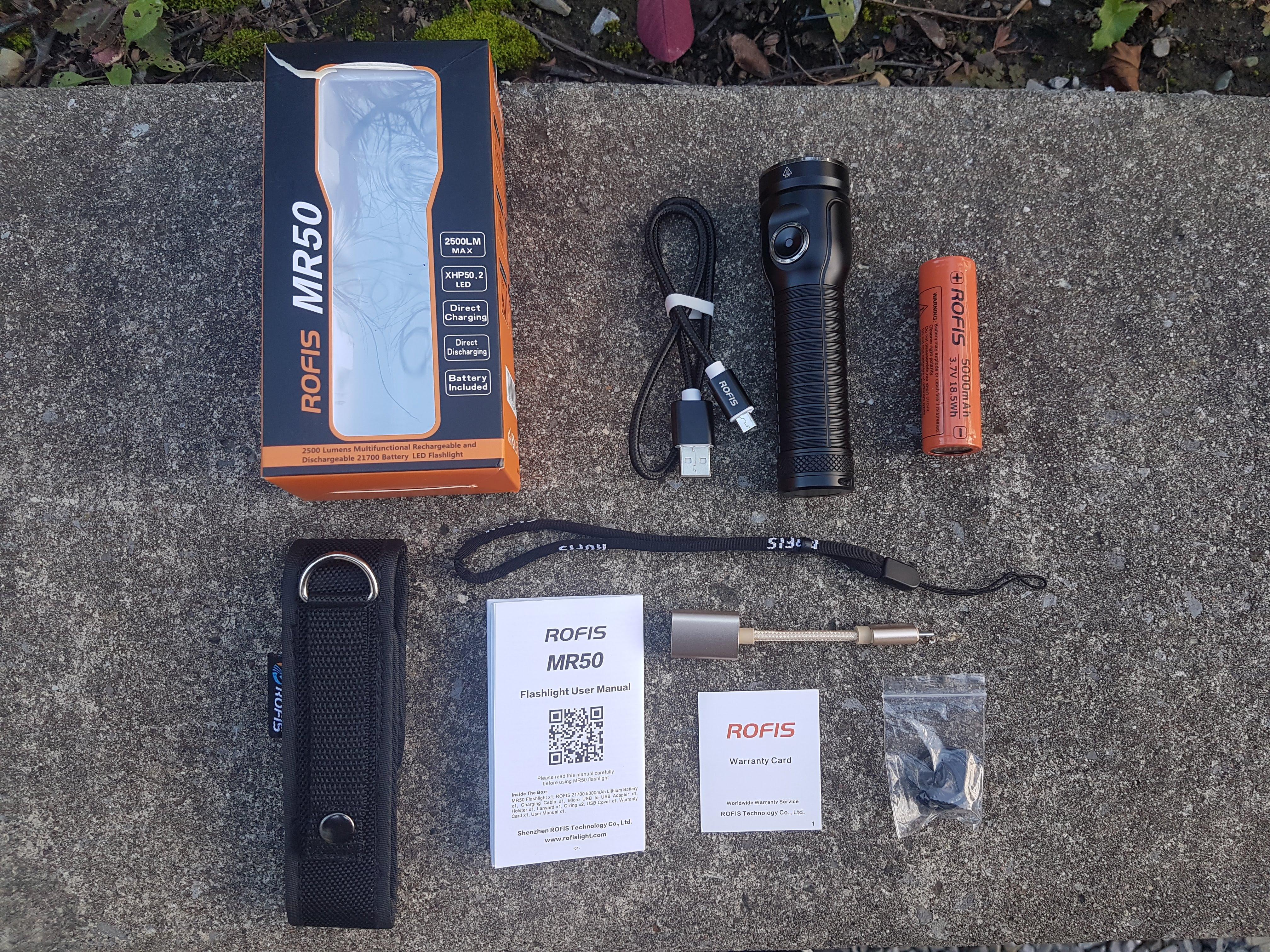 The light has a great feel in hand, and is surprisingly compact. The ribbing and grooves along the body give it great grip, while still making it easy to slide into and out of a pocket. 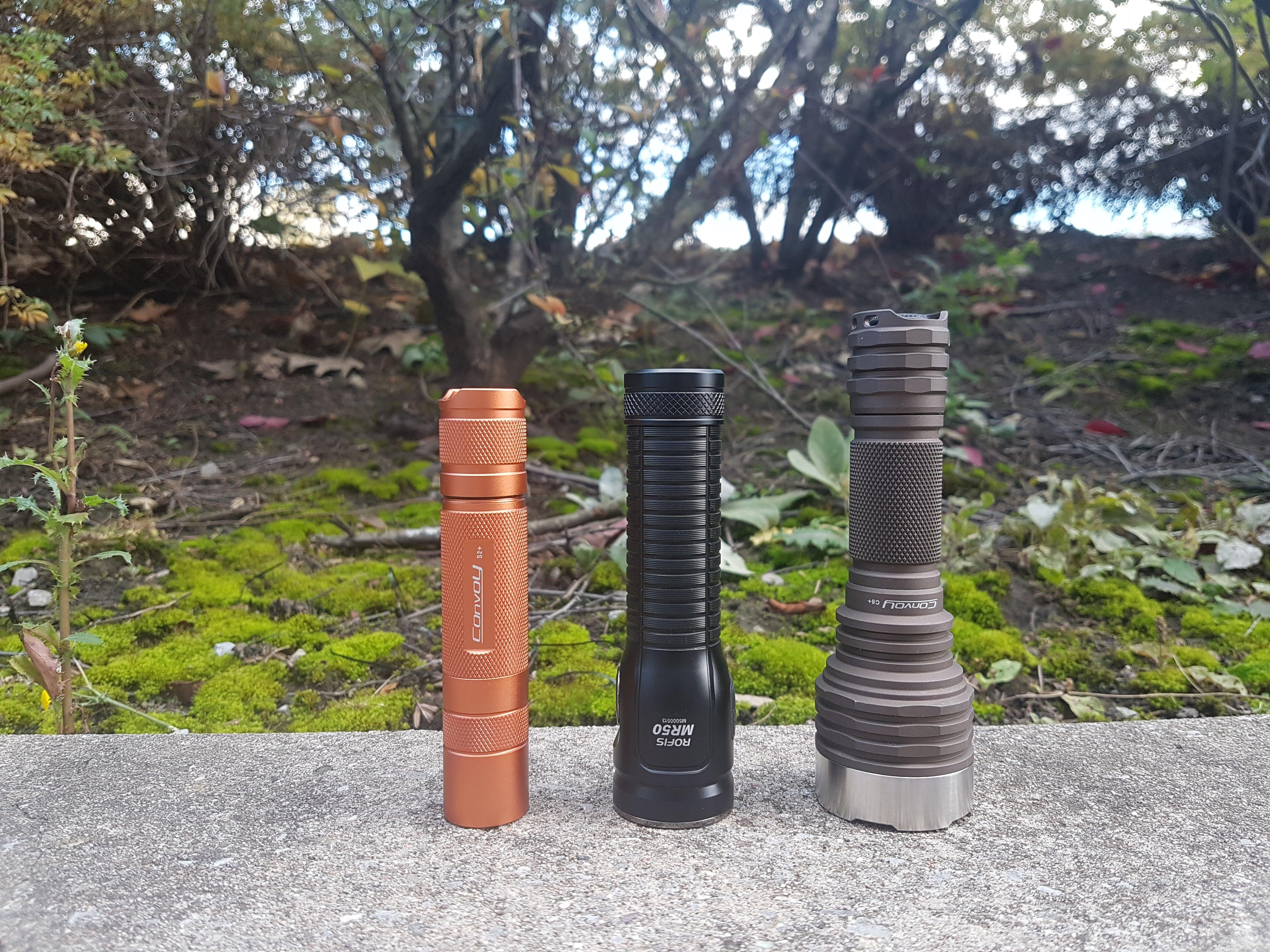 For retention, pretty much everything except a pocket clip is included. There are no points on the light where a clip could be attached, and I think the light is a bit too large to benefit from a clip anyways. The lanyard can be attached at the tailcap, nowhere else on the light.
The included sheath is made of nylon, with elastic webbing making up the sides to ensure a good hold on the light. The back of the light has a fixed belt loop, and a second belt loop that is held in place with both a steel snap and velcro. There’s also a steel D-ring above the belt loops. The light can be fit into the sheath both head up or head down, but it takes a bit of work to get it in head down, and I believe head up is the ‘proper’ way to use the sheath. The flap of the sheath is held closed with a large section of velcro, securing the light in place. 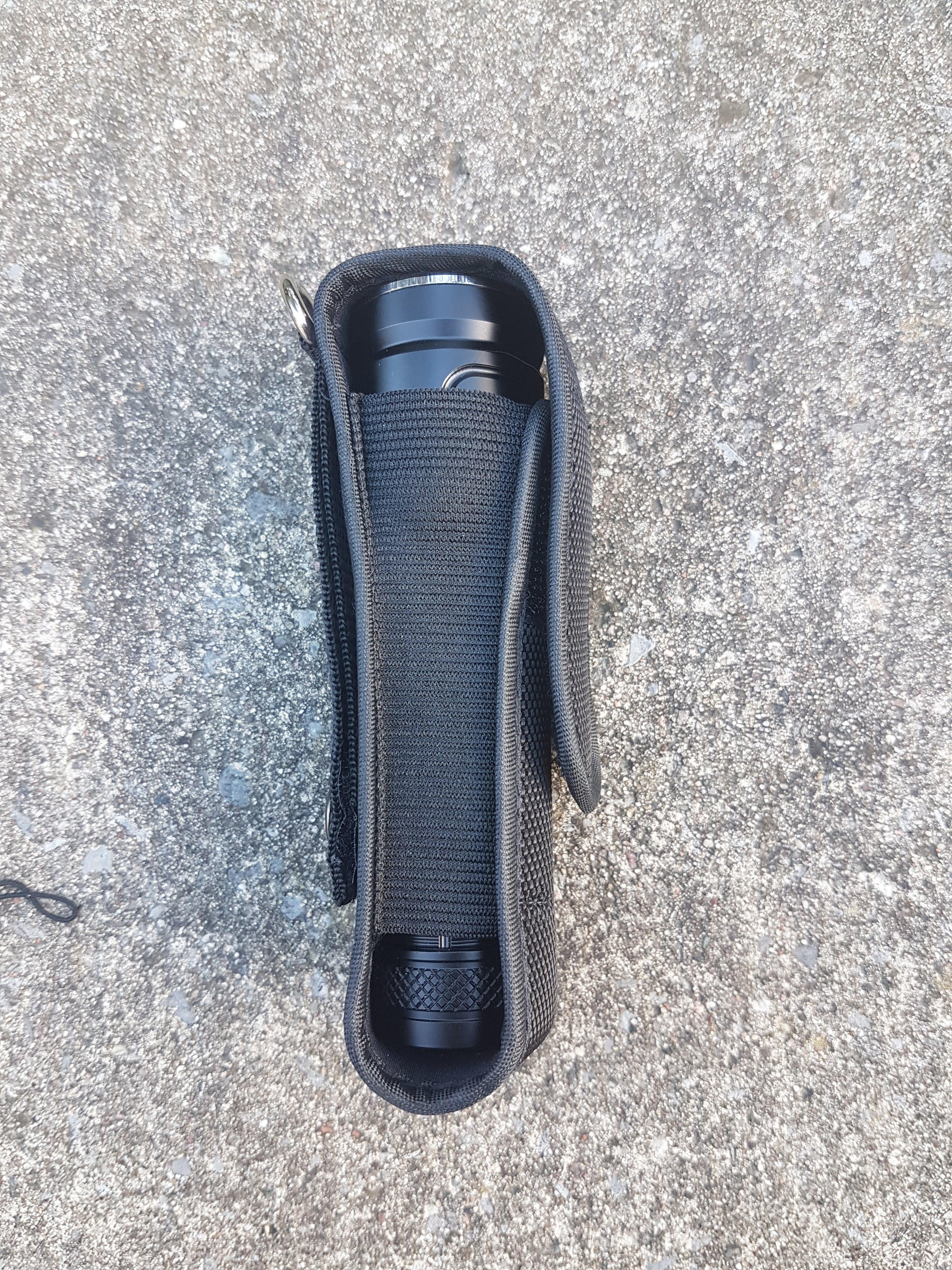 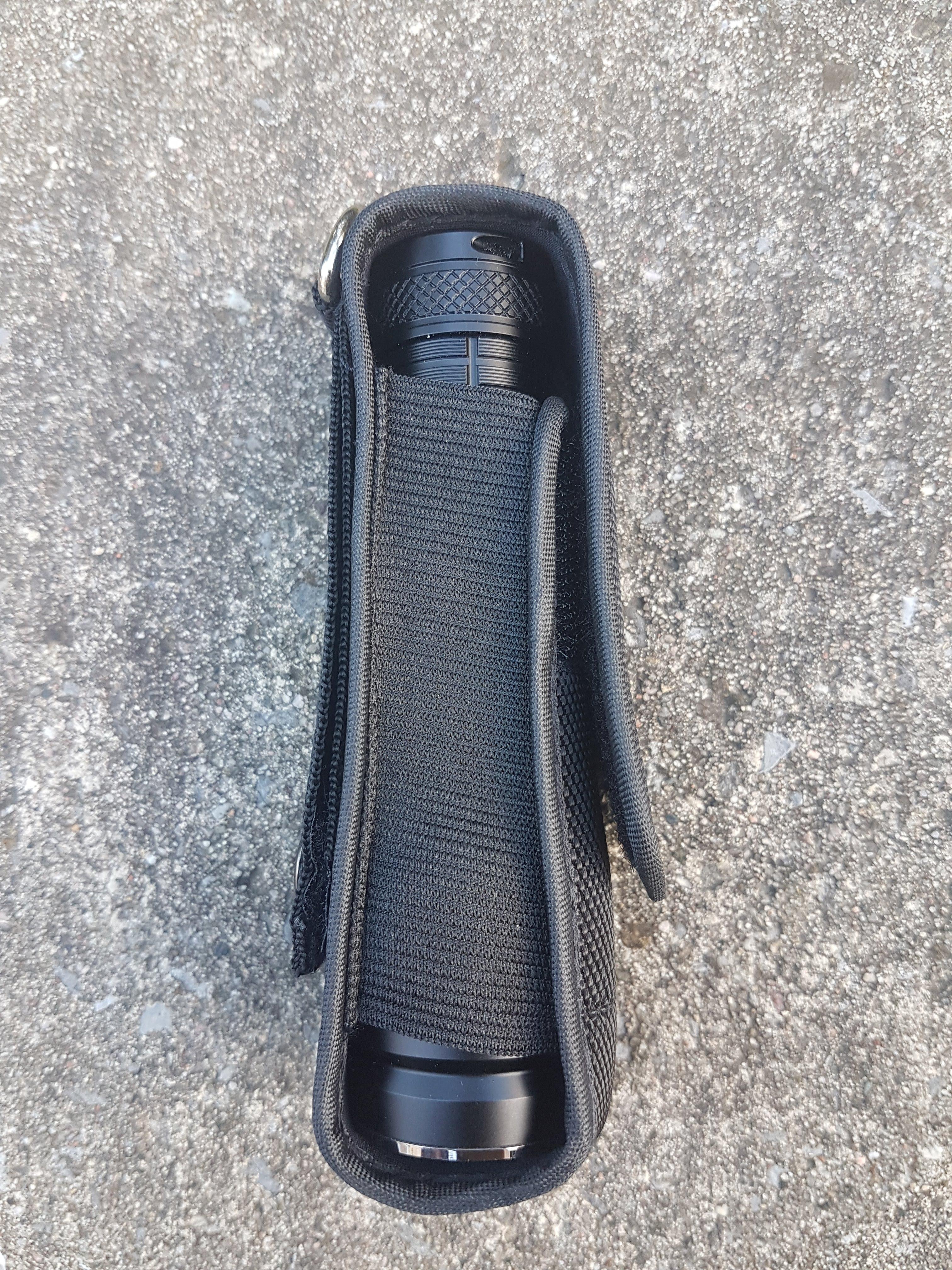 There are three main modes to this light, with claimed outputs of 25, 300, and 1200 lumens, as well as a 2500 lumen turbo and hidden strobe modes. Operation is fairly simple - a quick tap will turn the light on to the last mode, and another turns it off. While on, holding cycles through the main modes. There are a few special actions that can be accessed as well.
The basic functionality of this UI is good, but I would really like to see long press from off as a shortcut to low. The low mode is claimed by the manufacturer to be 25 lumens, and I wish there was a lower moonlight mode as well.

The light uses a cool white XHP50.2, which is well centered in the orange peel reflector. The beam from this large emitter is relatively floody, and has a good profile. The larger emitters from Cree have a bit of tint shift in the beam, but the beam on this light is very usable. The output is high enough that it can still throw relatively well, and the manufacturer claims up to 261 meters of reach. 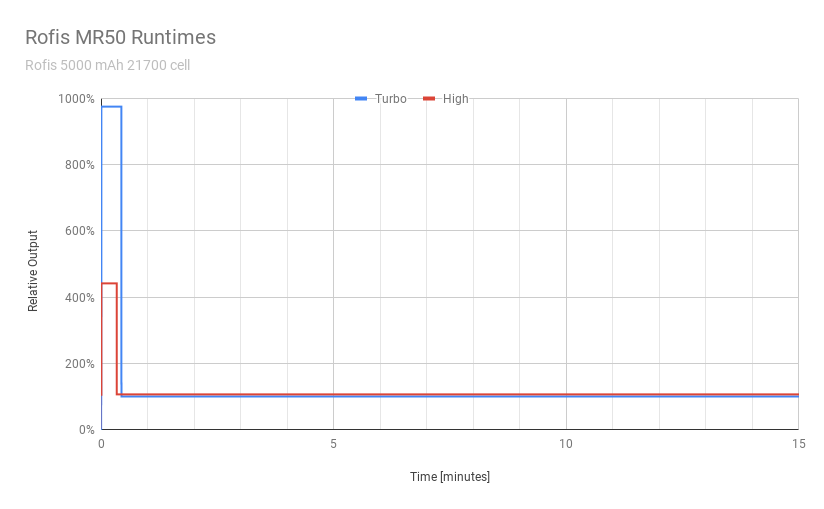 Unfortunately, the light I tested showed drastic step downs. The specifications state step downs should be observed at 1 and 6 minutes on turbo, and at 1 minute for high. My sample stepped down at less than 30 seconds in each mode. This is not the expected behavior, and it makes the higher modes far less useful since they step down so drastically. On the plus side, runtime after the step down was flat and long. Both tests ran for hours and were stopped before the cell was drained. The graph above has been zoomed in to the first few minutes to capture the higher outputs.

A quick note - this is my first analysis of a powerbank. If you have any comments, suggestions, requests, or questions about this data, please let me know!
Charging is done through the micro-USB port - which is good, because the vast majority of dedicated chargers on the market can’t handle cells this long. Current when charging doesn’t quite reach the claimed 2.0 A rate, and a full charge takes about 4 hours to complete. 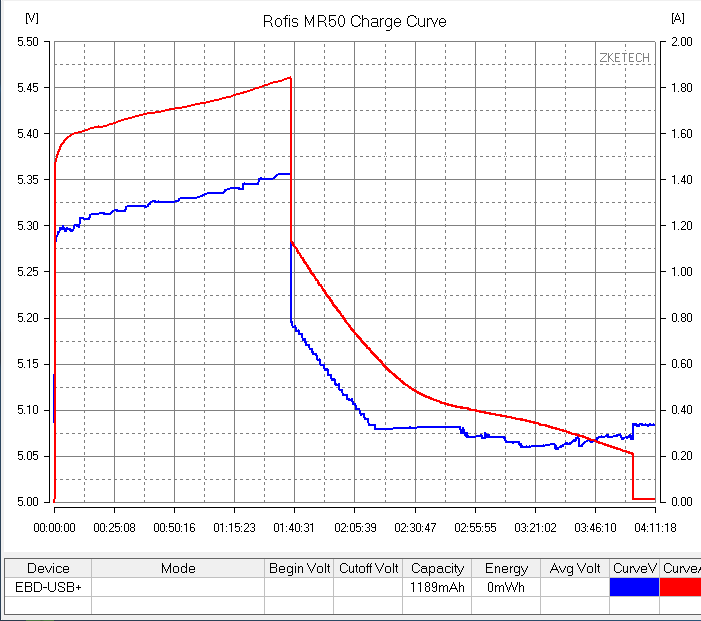 To charge an external device, the included USB-OTG must be plugged in to the light, and then whatever charging cable required run out to your device. At 0.5A, the device was able to provide 15.97 Wh of power. 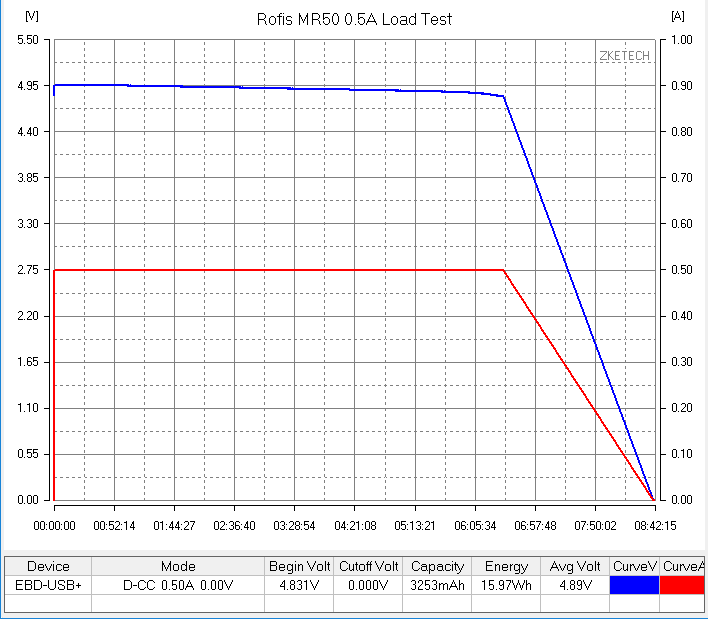 Tests were also done at higher currents. A 1.0 A draw had only a small impact on the efficiency, and the powerbank still provided 15.05 Wh. The test at 2.4 A, the maximum specified output, was a different story. The voltage dropped as the cell drained, and the total power delivered was only 9.36 Wh. After power delivery stopped, the cell voltage recovered and the powerbank tried to provide power in small spurts. Overall this is solid performance, but higher currents should only be used if you prioritize charge speed over efficiency. Use at higher currents caused the device to get warm, but never hot. 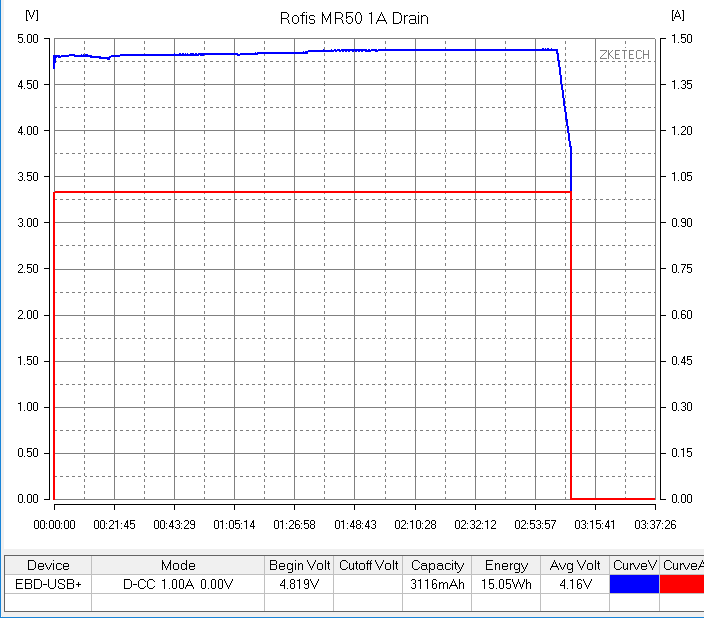 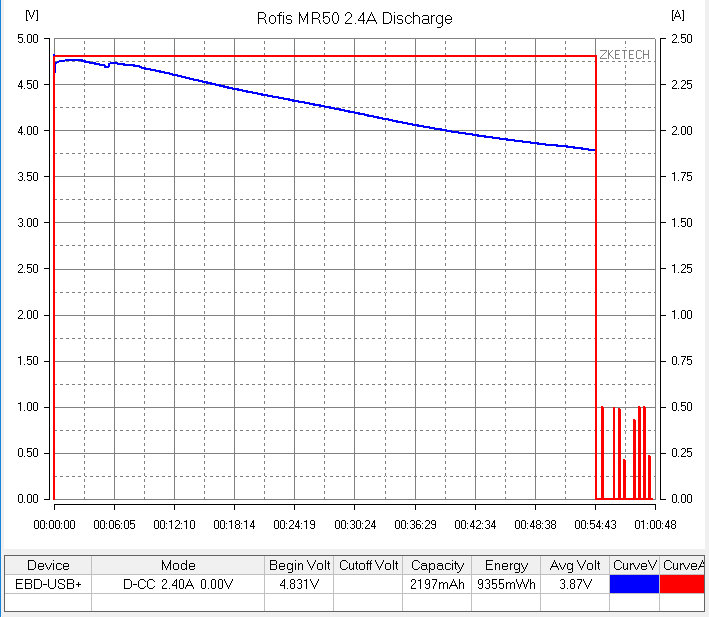 Testing different currents, voltage was solid up until the 2.4 A current specified as the maximum. The device actually was able to supply a maximum current of 2.8 A, though at this point the voltage had dropped a bit. 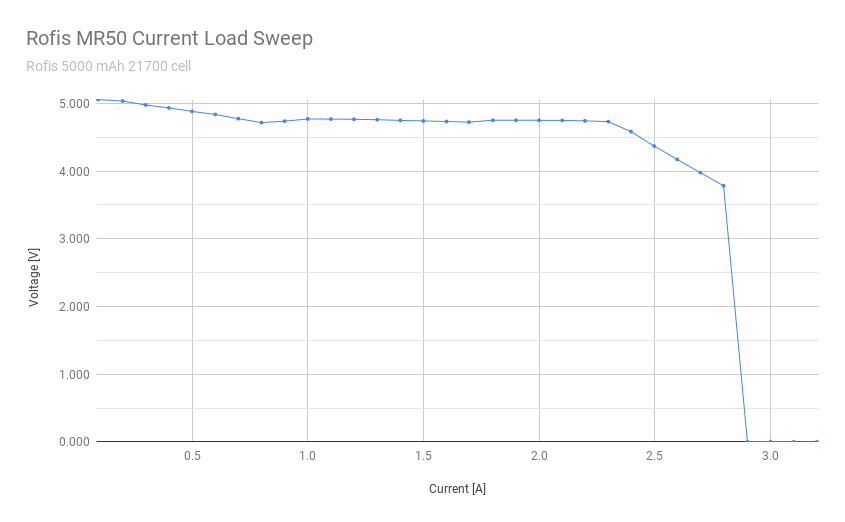 I would love to see a USB-C port used in future iterations of this light, as that would eliminate the need for this separate adapter. Note that power out will not work properly if the USB-OTG cable is plugged in to a device instead, i.e. the cable set-up is not reversible even though both ends are the same. With the current port, you need to carry an OTG cable around. This isn't a huge issue in terms of weight, but it's a bit messy. It's also a lot harder to find an OTG cable lying around if you forget yours. 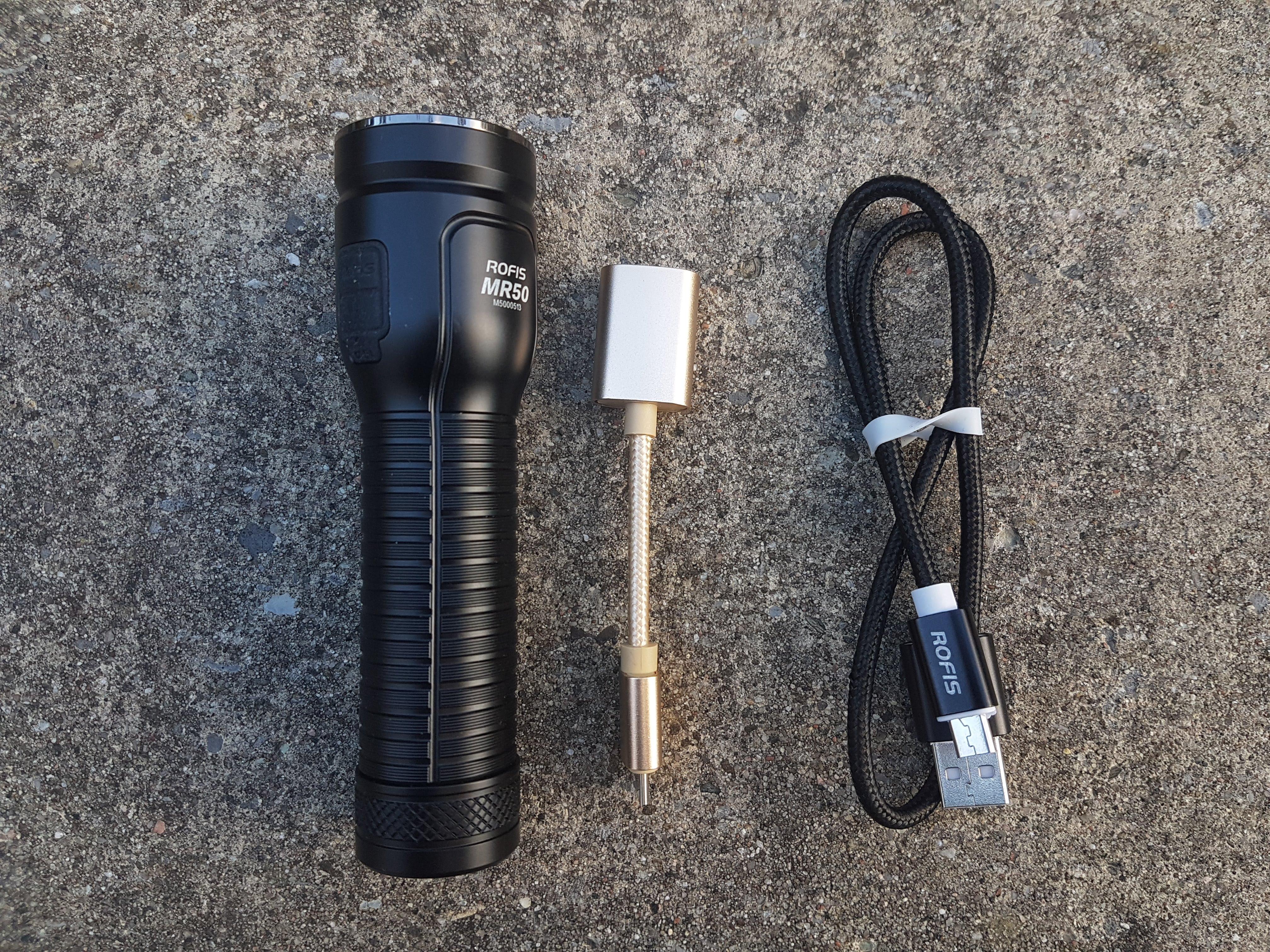