XTAR sent me their new PB2 for review. This is a two bay 18650 charger with an LCD readout for percentage charged that supports use as a power bank. The version sent to me for review is black, but their website shows that it will be released in red, orange, and blue as well. 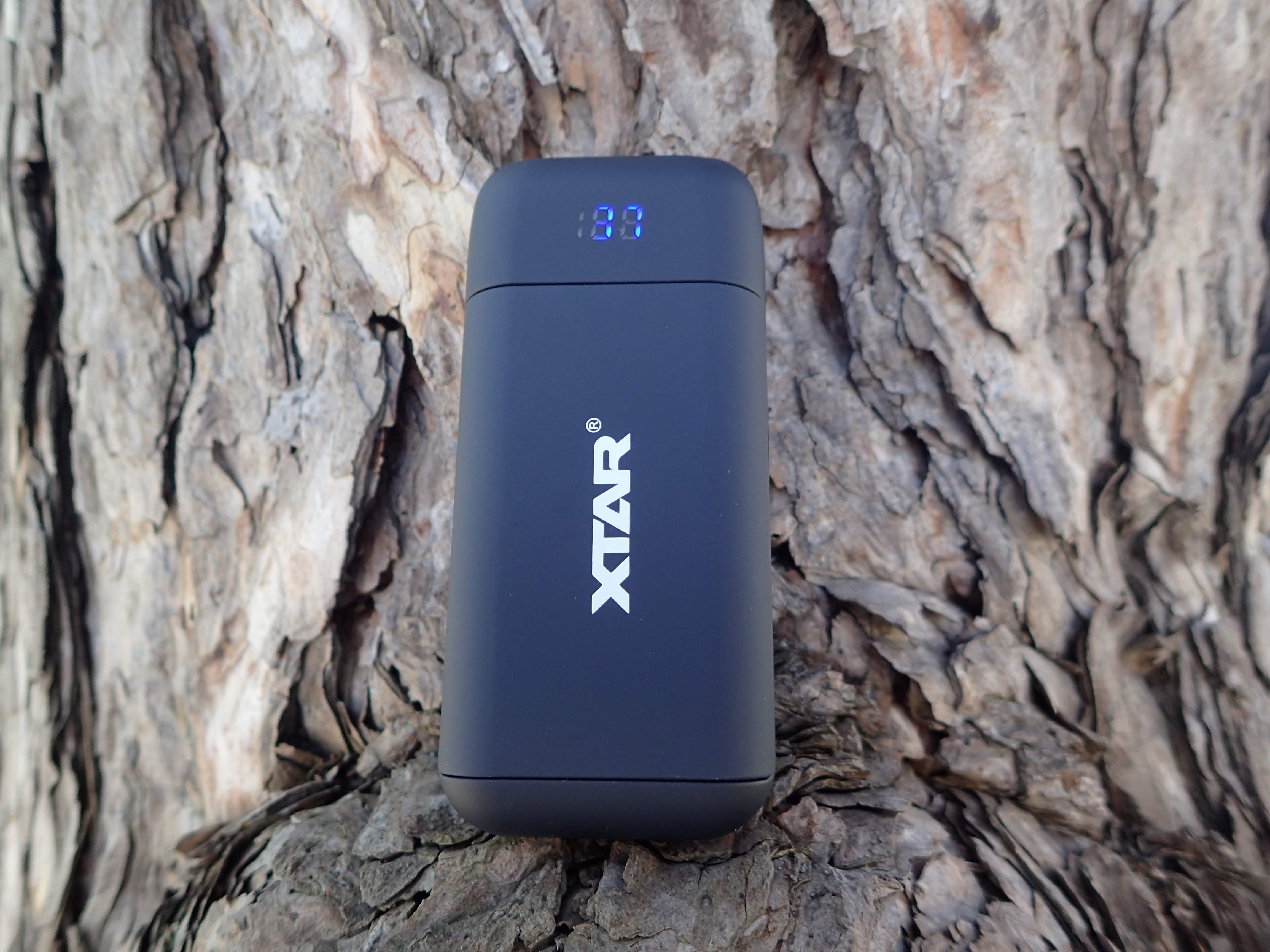 I like this powerbank a lot. It’s pocketable, high capacity, and enclosed. With this feature set, it fills a niche in the market that I don’t think any other charger quite matches. If you’re looking for a charger you can grab and toss into a bag without worrying about it, this might be the best option for you.
This review might be a bit boring, but that’s a good thing! The charger does what it says on the box, and it does it very well. Exciting charger reviews are usually bad news.

The charger is made entirely of a soft-touch plastic. The soft, rounded shape reminds me vaguely of the old Motorola Pebl - which is a good thing! It’s nice to see a charger that doesn’t adopt the ‘aggressive’ profile of the others on the market.
There’s a removable cover for the two cell bays that attaches with two strong magnets. The magnets are strong enough that the cover won’t pop off during use, and will even hold the charger door to the side of the unit opened in a hinge-like fashion. 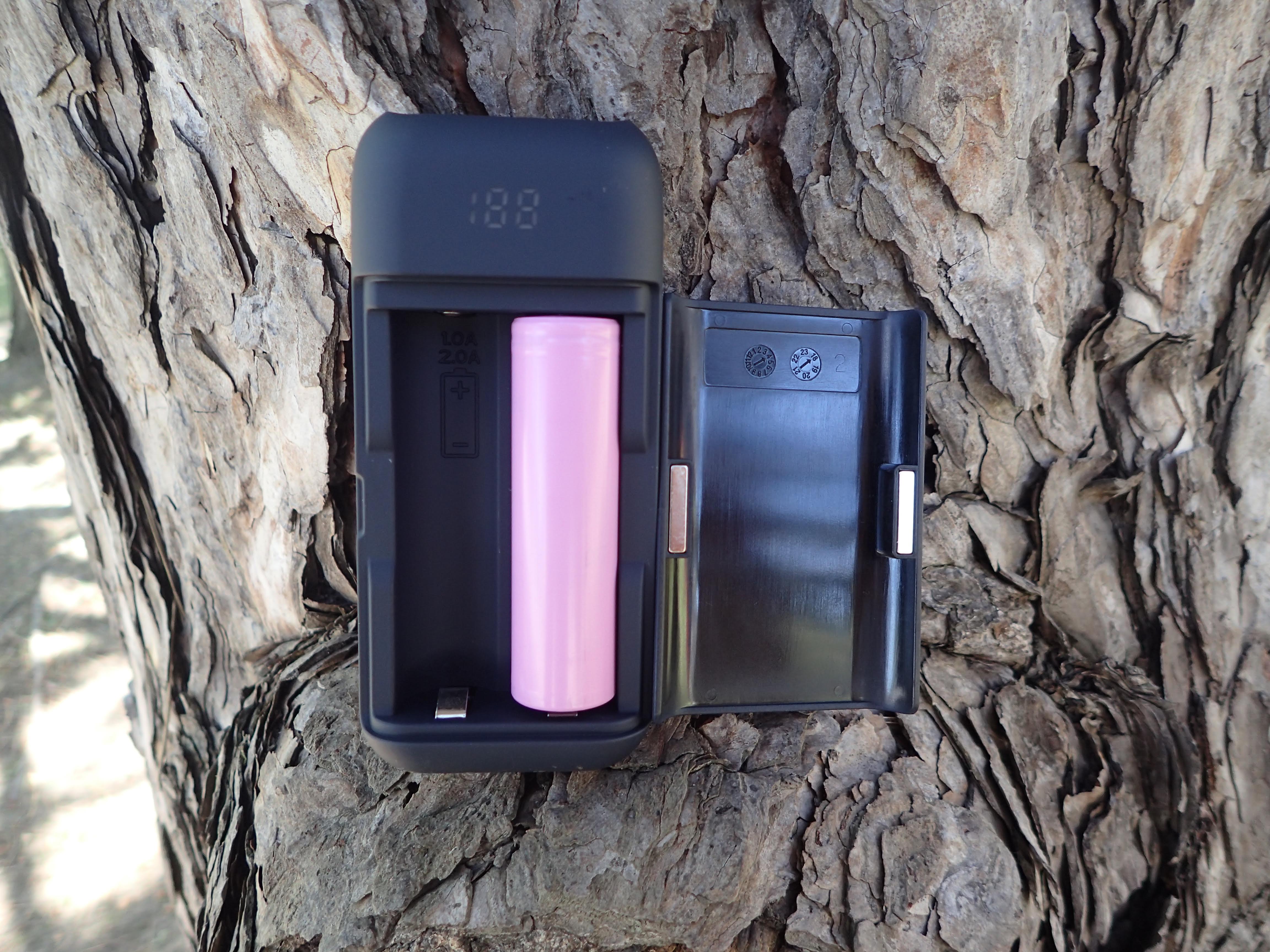 The two cell bays are designed to fit ‘true’ 18650 cells. This means unprotected flat top cells that actually measure the 65.0 mm that their specifications suggest. Button top cells might fit with some elbow work, but it’s not suggested. Protected cells will not fit. These limitations mean this probably isn’t the best charger if you’re looking to pick up one charger for all your needs - there’s plenty of options from XTAR and other companies that will be much more flexible with which cells they can handle. As a power bank, this allows the product to be as compact as possible and hold the cells in place solidly. 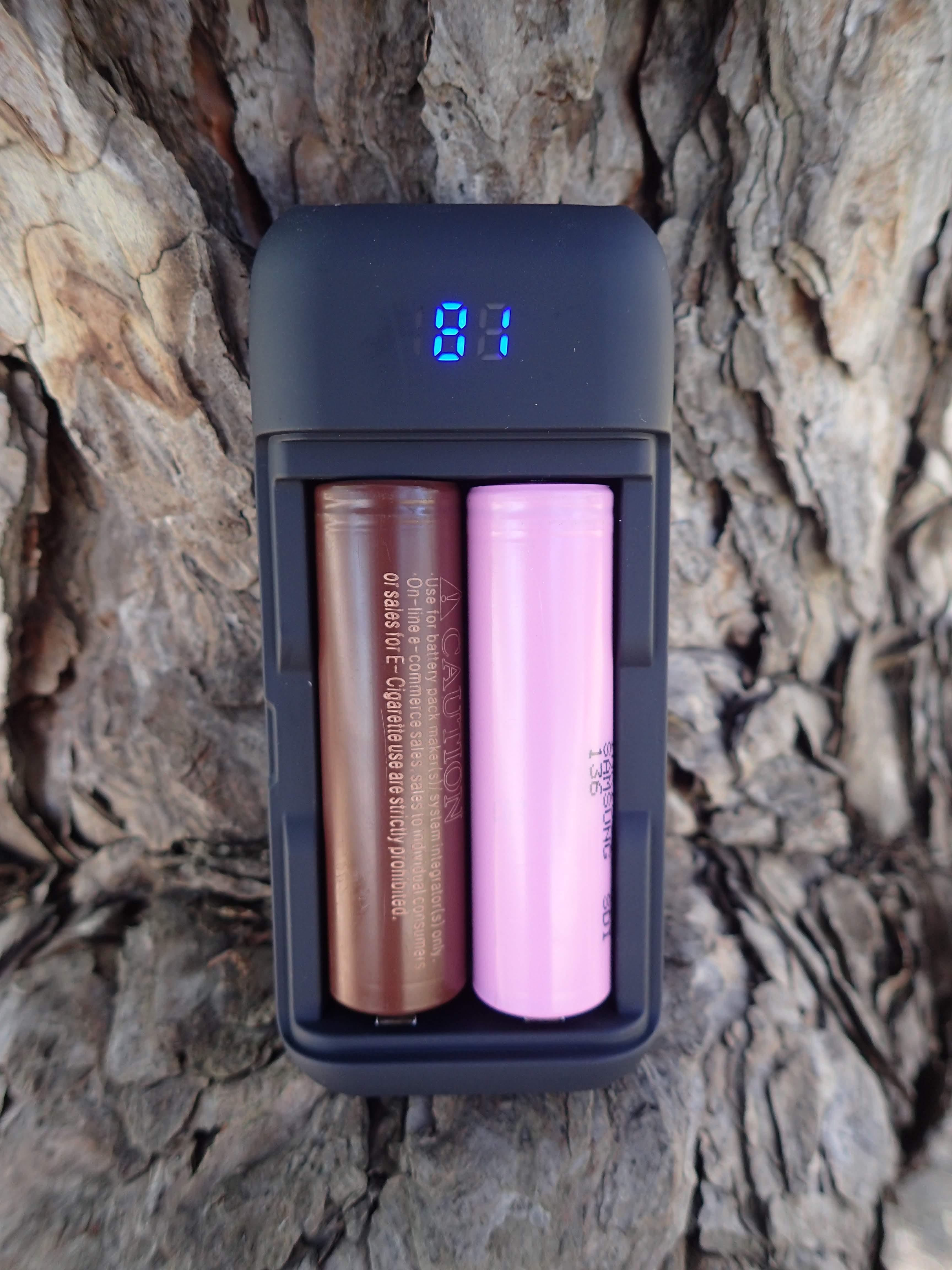 There’s a button on the right hand side of the charger. This has a small amount of play in it’s opening, but it works great. The right side is bare except for a small notch to help open the door, and the top has the USB-A port (for power out) and the micro USB port (for power in). Both ports had a firm hold on all cables I tested, and seem high quality. 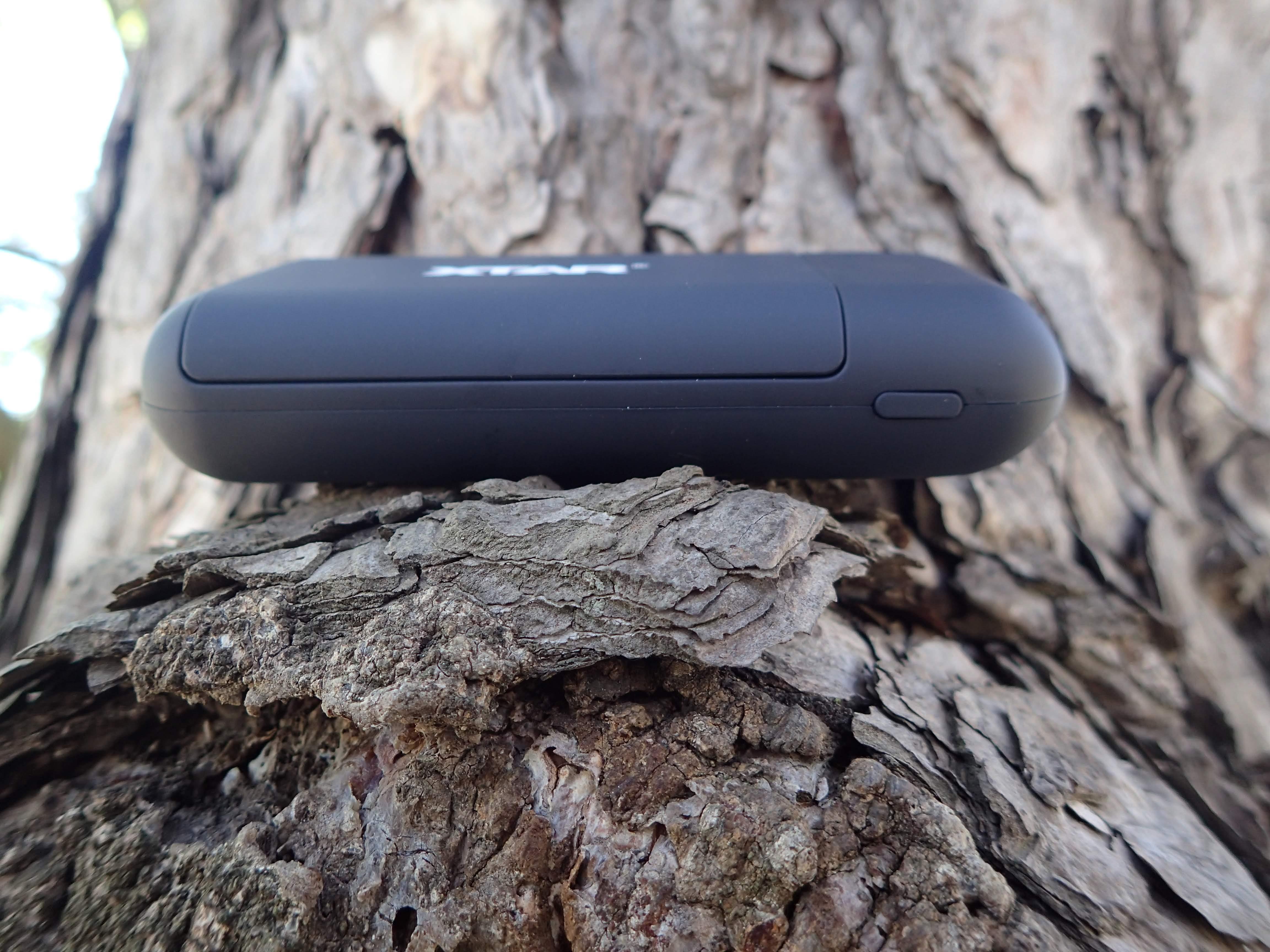 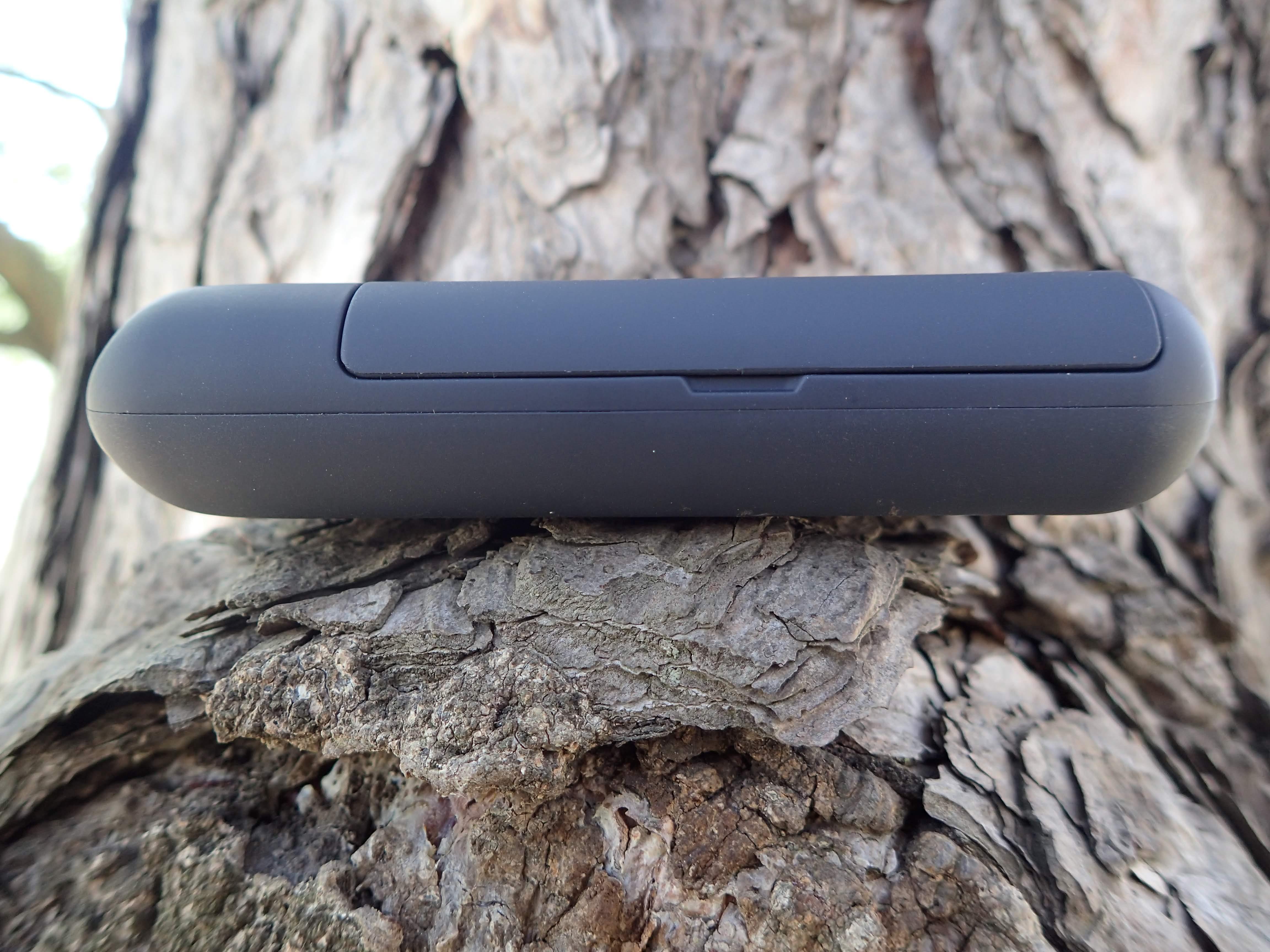 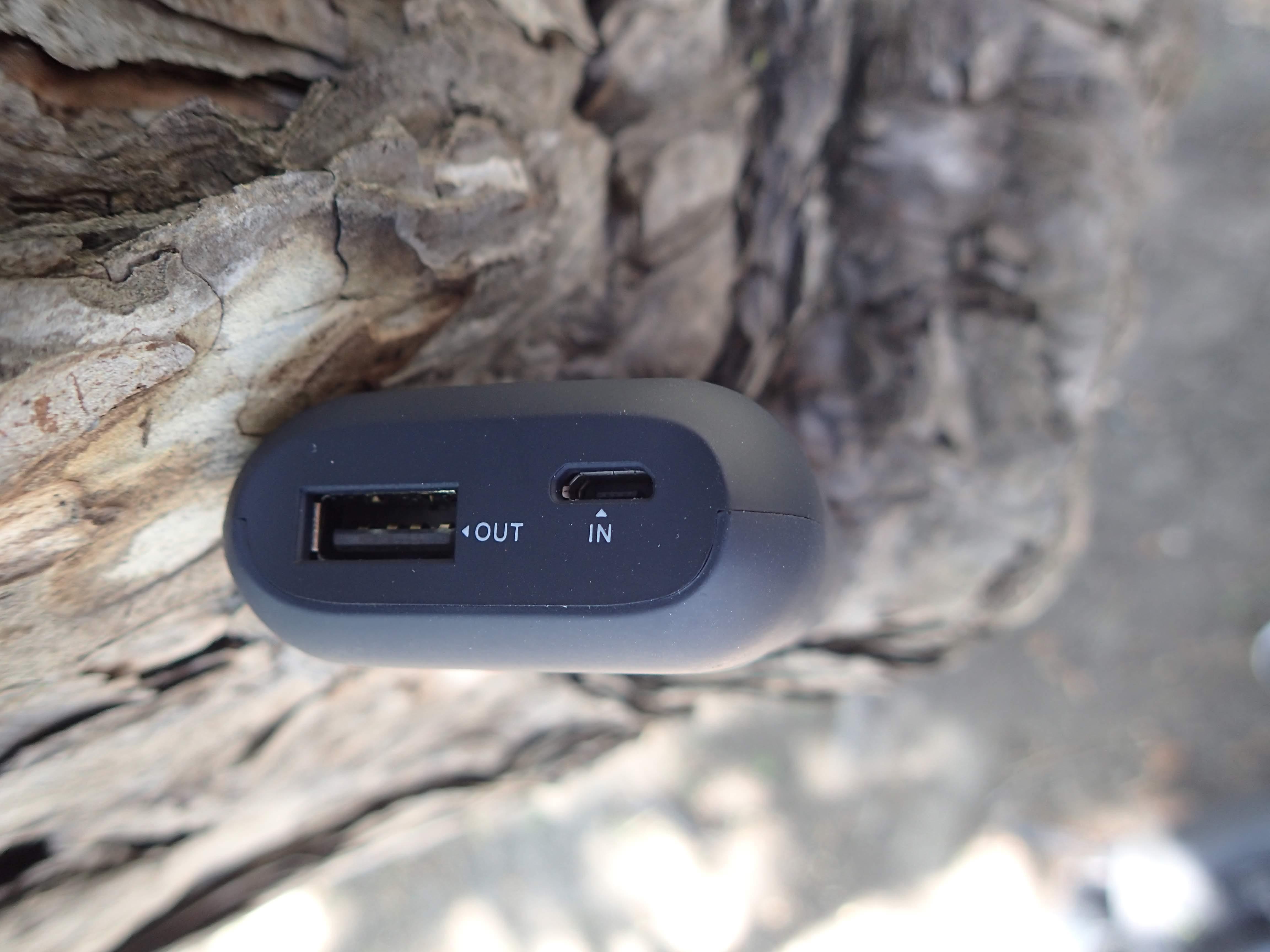 The screen printing of the logo on the front and the specifications on the back of the charger are high quality and did not show any signs of wear during my testing, which included being carried in a hiking pack alongside other items for over 50 kilometers, even with varying degrees of heat and moisture. The cell bays also have charge current labels molded into them. 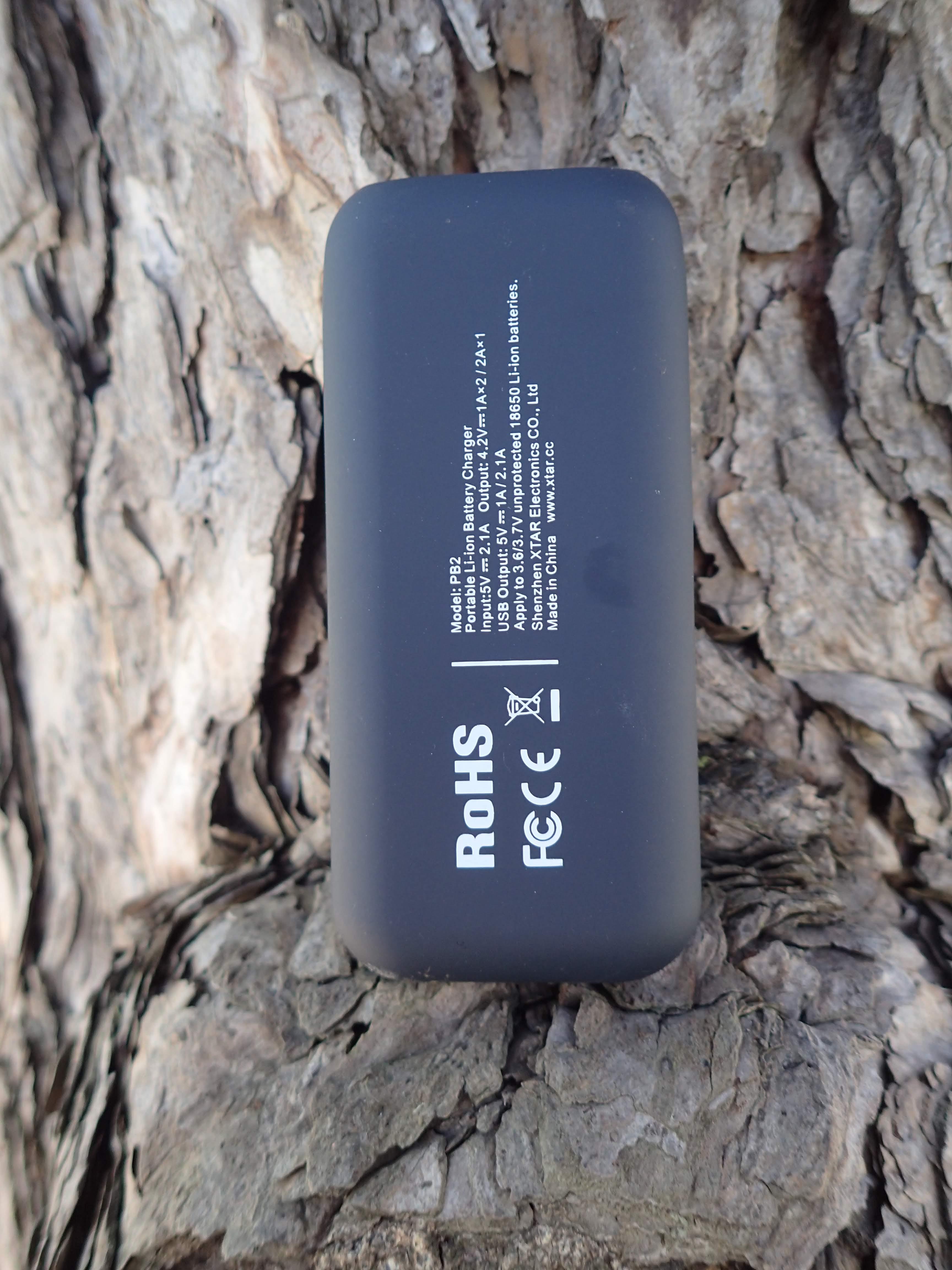 Charging cells with this charger is dead simple. Toss them into the bays, and plug the charger into the wall. The LCD will show the percent charge of a single cell or, if multiple cells are present, the average of the two. Charging stops when the cells are topped off or when the charger is unplugged. In my testing, this worked as expected and I had no issues whatsoever.

Power out from the charger works similarly to power in - just insert some cells, plug in a device you need charged, and voila. One cell in the charger will provide a charge current of up to 1 A, and 2 cells can provide up to 2 A. Testing with my cell phone and my camera worked as expected.
The charger also supports pass-through charging - if cells are charging in the device, and a load is connected to the USB port, both will charge simultaneously.

The display is a segmented LED with a blue backlight. At some angles the backlight can bleed and fill unused segments, but this isn’t an issue when viewing head on. This screen displays the percent charge in the cell or cells loaded into the charger. The screen uses PWM, but it is not visible to the naked eye.
When the charger is in use, the display is always on. When the charger is not in use, pressing the button on the side of the charger will light up the display to show the remaining charge. This is the only function of the button. I wish the button could do more - switching to a voltage display (this would require a few more characters on the display), switching charge speeds, or turning off the display while charging is ongoing would all be nice features. In its current state, the button is my only gripe with the charger - it doesn’t serve much function at all.