on June 26, 2018
A few weeks back Blauer posted about a new tactical pen light that they had launched on their site. I asked for a review sample to answer some questions the sub had it, and they agreed to send one over. After a brief visit with the Canadian border guards, the light finally made it to my door.

This is product is marketed as a tactical pen with a built in 60 lumen light. Unlike most pen lights, the emitter on this one is built into the clip, with a switch on the tail. The lower portion of the pen twists to extend or retract the pen tip. The built in light also has a secondary red LED. 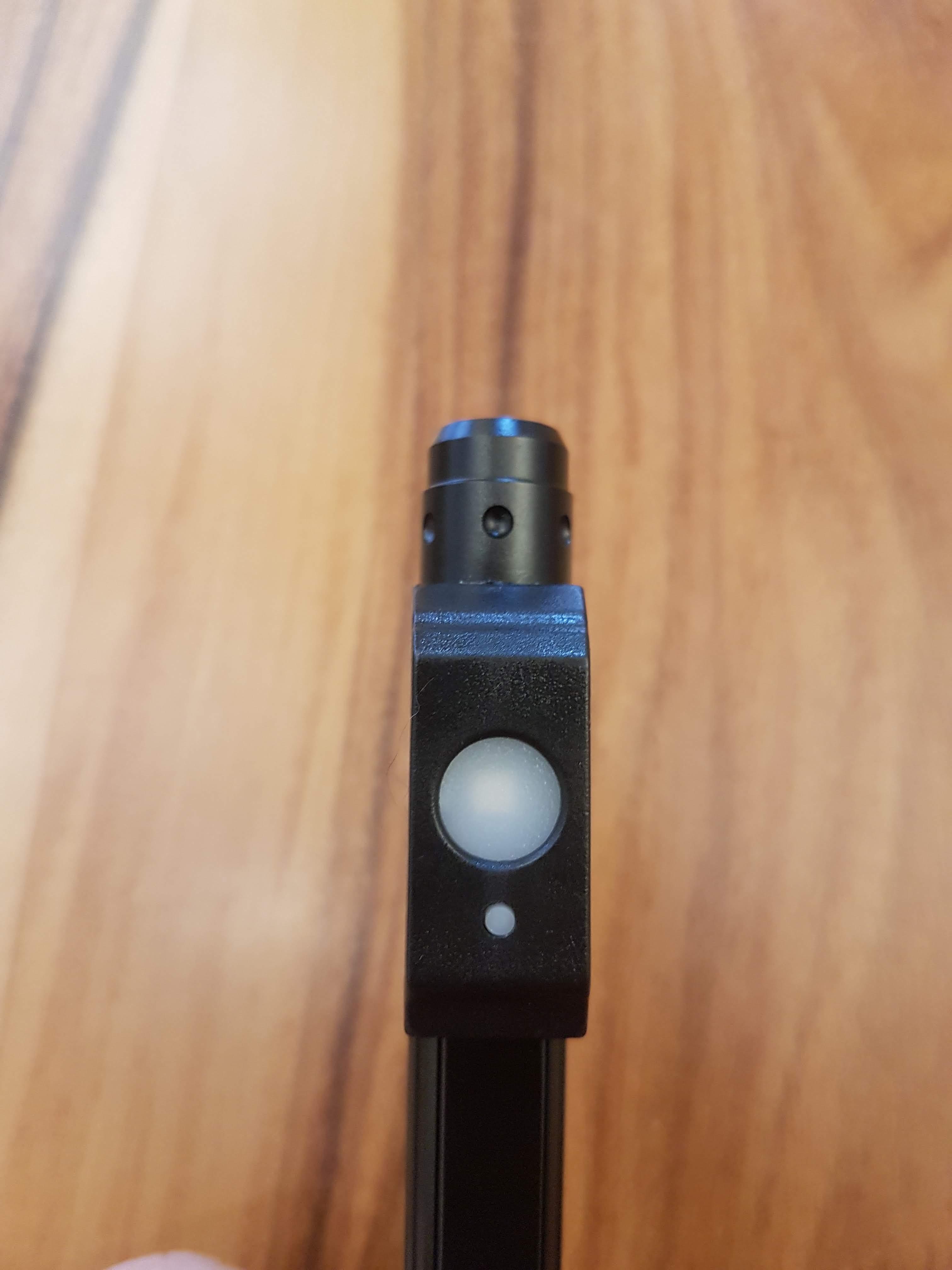 Like most multi- products, there are some compromises made to both the pen and light functions in order to make this fit in the package. The beam is pretty good, but the build quality of this product is not stellar.

This pen seems to be made mostly of aluminum. The clip is made of steel, and the housing around the LED is plastic. The action on the pen is very smooth, and the entire product feels sturdy while writing. 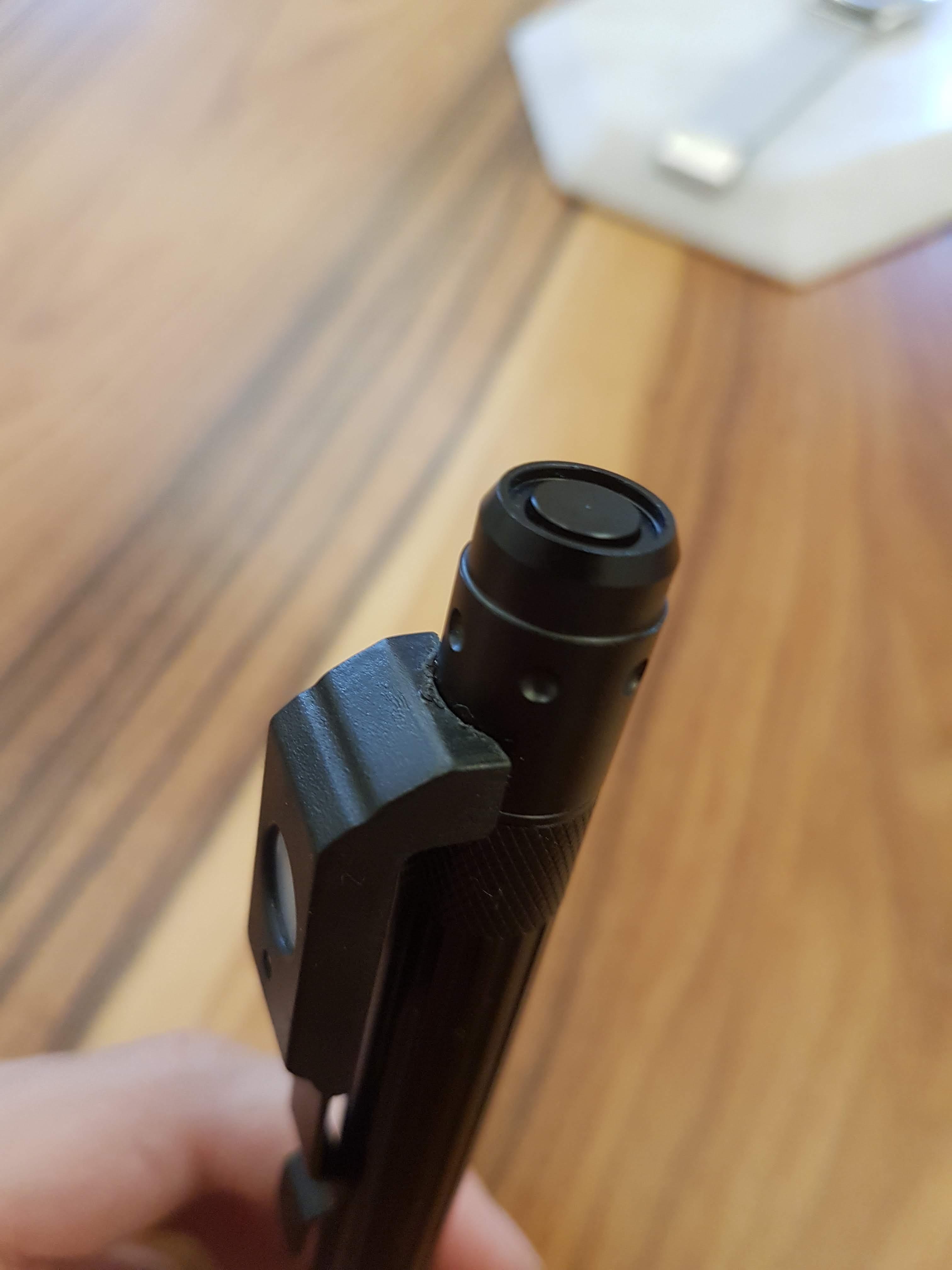 The construction towards the tail end of the light isn’t quite as nice. The threads are cut rough and un-anodized. The cell carrier is just a hole drilled in to the aluminum body – there’s no spring or other contact at the negative end of the cell. The positive end has a spring. There is no O-ring or other seal on this portion of the light, so I doubt it would stand up to very much water. The position of the clip also forces you to bend it slightly in order to screw the tail on straight. Combined with the small, soft threads, this seems like it could result in cross threading – though I did not have any issues during my tests. 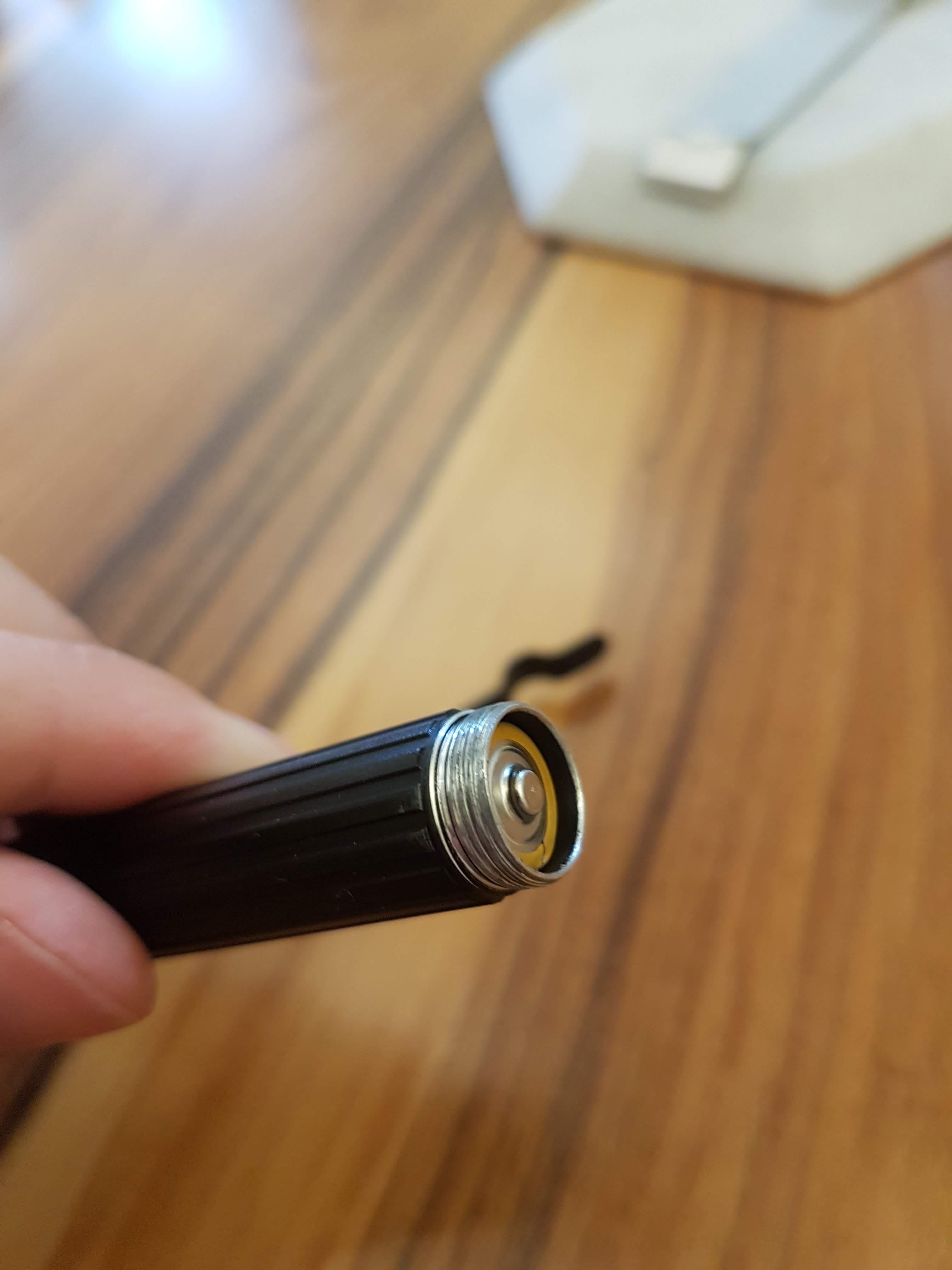 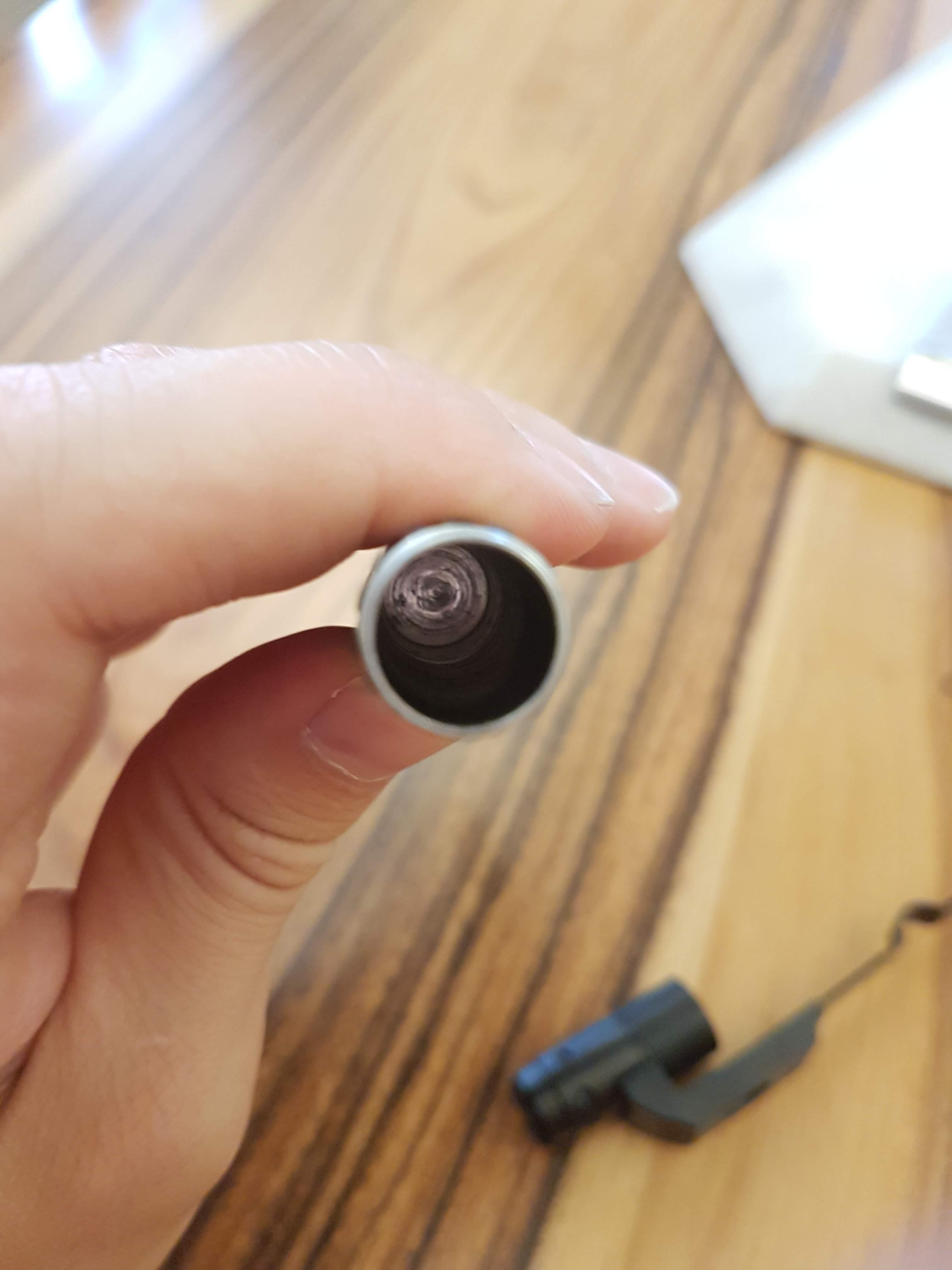 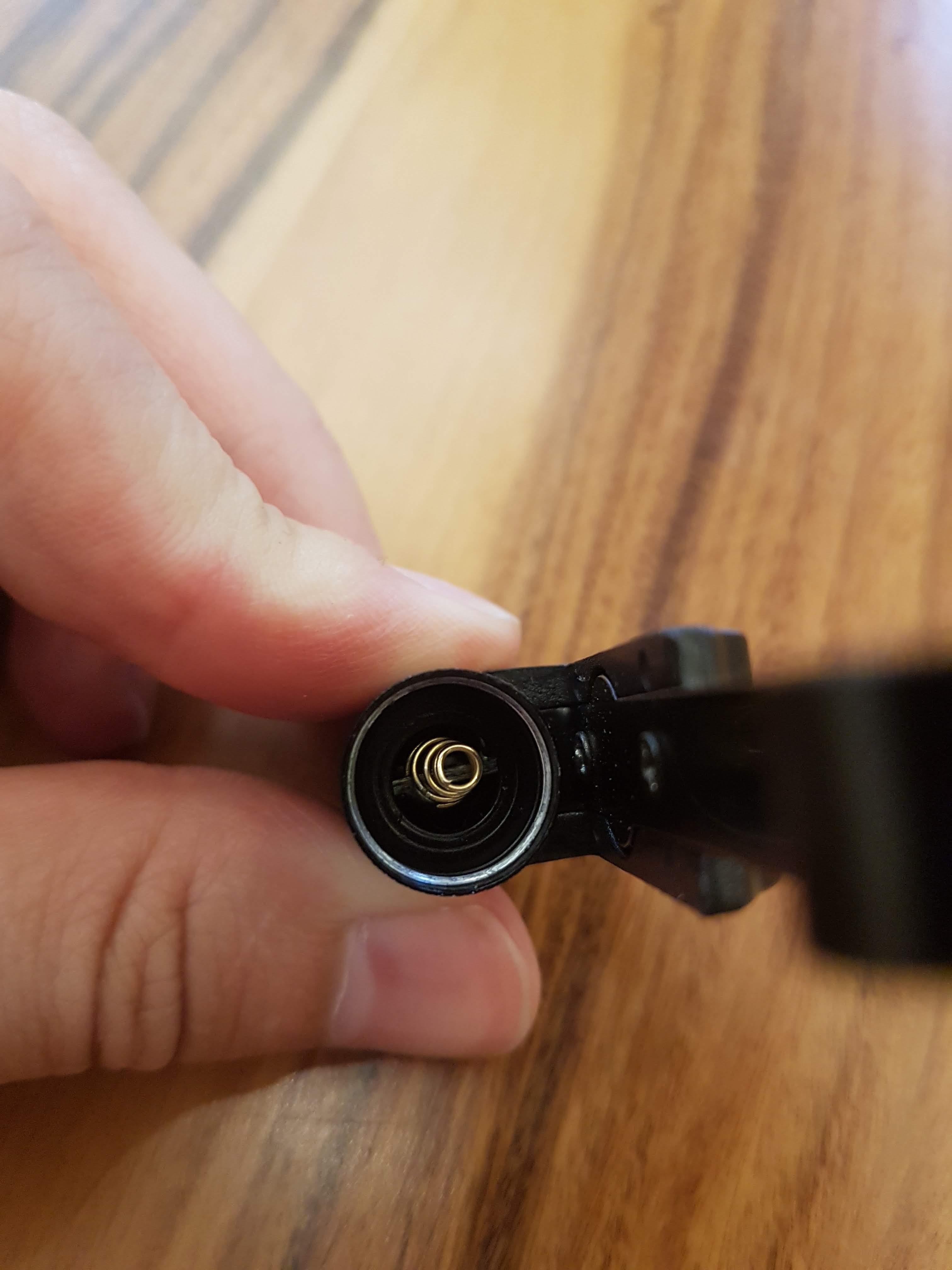 There is an O-ring on the thread at the pen end of the product, which presumably helps keep the pen mechanism smooth. This end of the item is also well lubed. The light also shipped with a spare ink cartridge and an alkaline AAA cell. It’s nice to get the whole kit, but the parts were just rattling around in the box which scuffed the finish of the pen slightly. 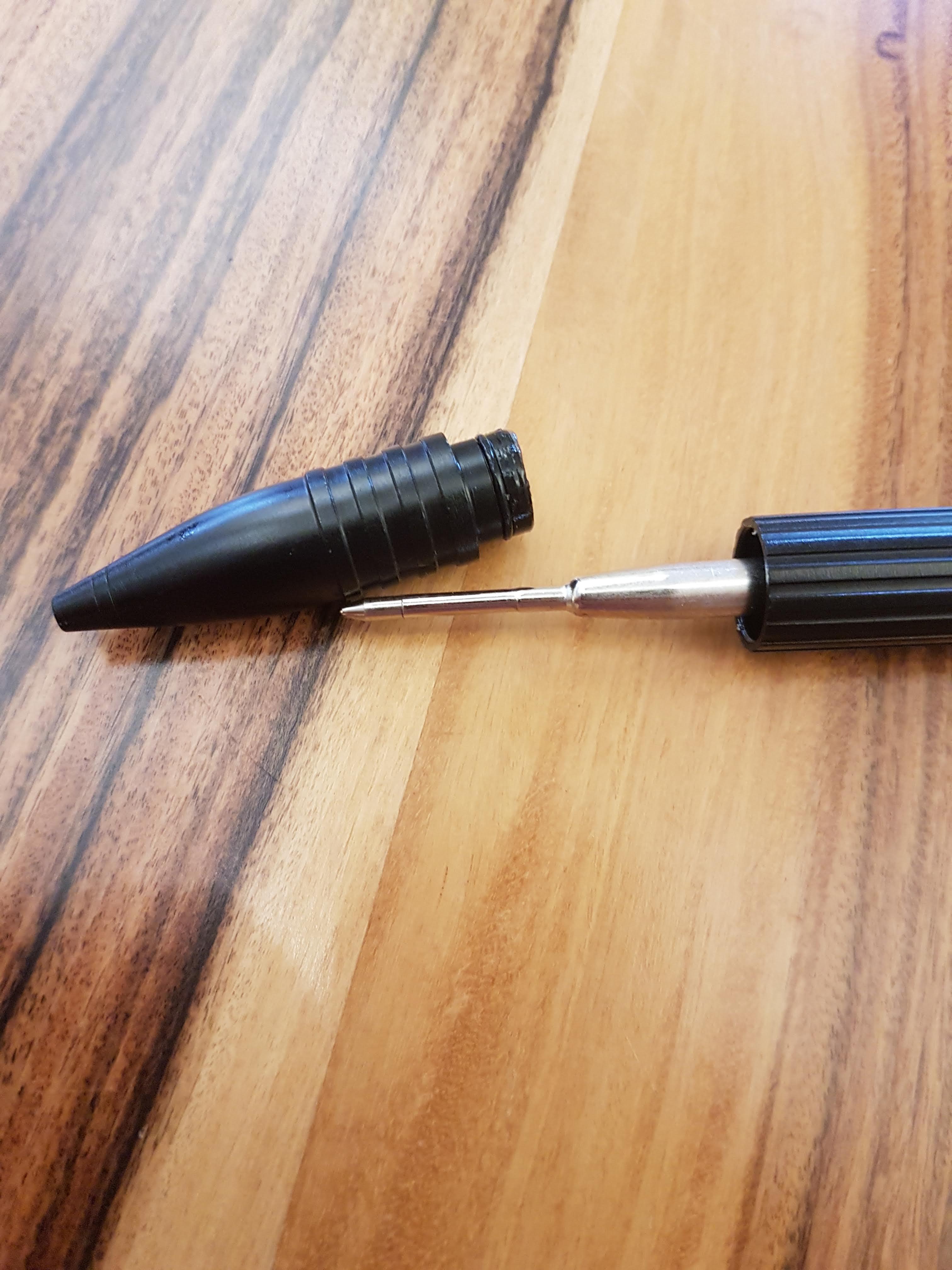 The pen has 3 modes with no shortcuts. From off, one click of the tail turns the red LED on to a slow blink – about one second on followed by one second off. Clicking a second time disables the red LED, and turns on the diffused white emitter. A third click gets you both the steady white and blinking red lights simultaneously. Finally, one more click turns off the light.
This UI is simple enough, but it means you need at least 4 clicks to use any single mode. I would have preferred a single click to turn the light on or off, with long or double presses to change modes. A lower mode on the white emitter could come in handy as well. Although I don’t usually use secondary red emitters on my lights, lots of people do – so having some method to use the red LED without it flashing would have catered to them and, some may argue, would eliminate the need for a dimmer white mode.

The white emitter is very diffuse, with no perceivable tint shift through the beam. The tint is a bit on the cooler side of neutral, but that’s to be expected. There’s a bit of a green cast to the light against a white wall, but I didn’t notice it in use. Blauer claims 60 lumens of light from this. That seems like it might be a bit on the high side, at least with the provided cell, but the output doesn’t seem unreasonably low for the form factor.
I don’t see any purpose for the slowly blinking red LED. I suppose it could help you be seen, but it’s dim enough that I don’t think it would serve that purpose very well.

The clip on the light is pretty solid. It’s great to clip to a chest pocket, and would be ideal to use in this position to light an ID you were checking or a clipboard held in front of you. One obvious downside to this is that if you have a clip board in front of you, you may also need a pen…
This light also marketed as ‘tactical’. While the claims that it makes about being able to distract individuals with its light seem unreasonable, I have no doubt that it would hurt if someone whacked you with one. Your mileage may vary.

The pen uses a Lamy M22 cartridge. Some people don’t like writing with ball point pens, but I very much do, and this is no exception. The pen writes smooth and I didn’t have any issues with skipping or scratching. I also like heavier pens, although the length of this one means the center of gravity was a bit higher than I would prefer. Note that these smaller ink cartridges tend to be better suited for jotting down quick notes or signing things – if you plan on writing an exam or essay, you’ll probably go through a lot. 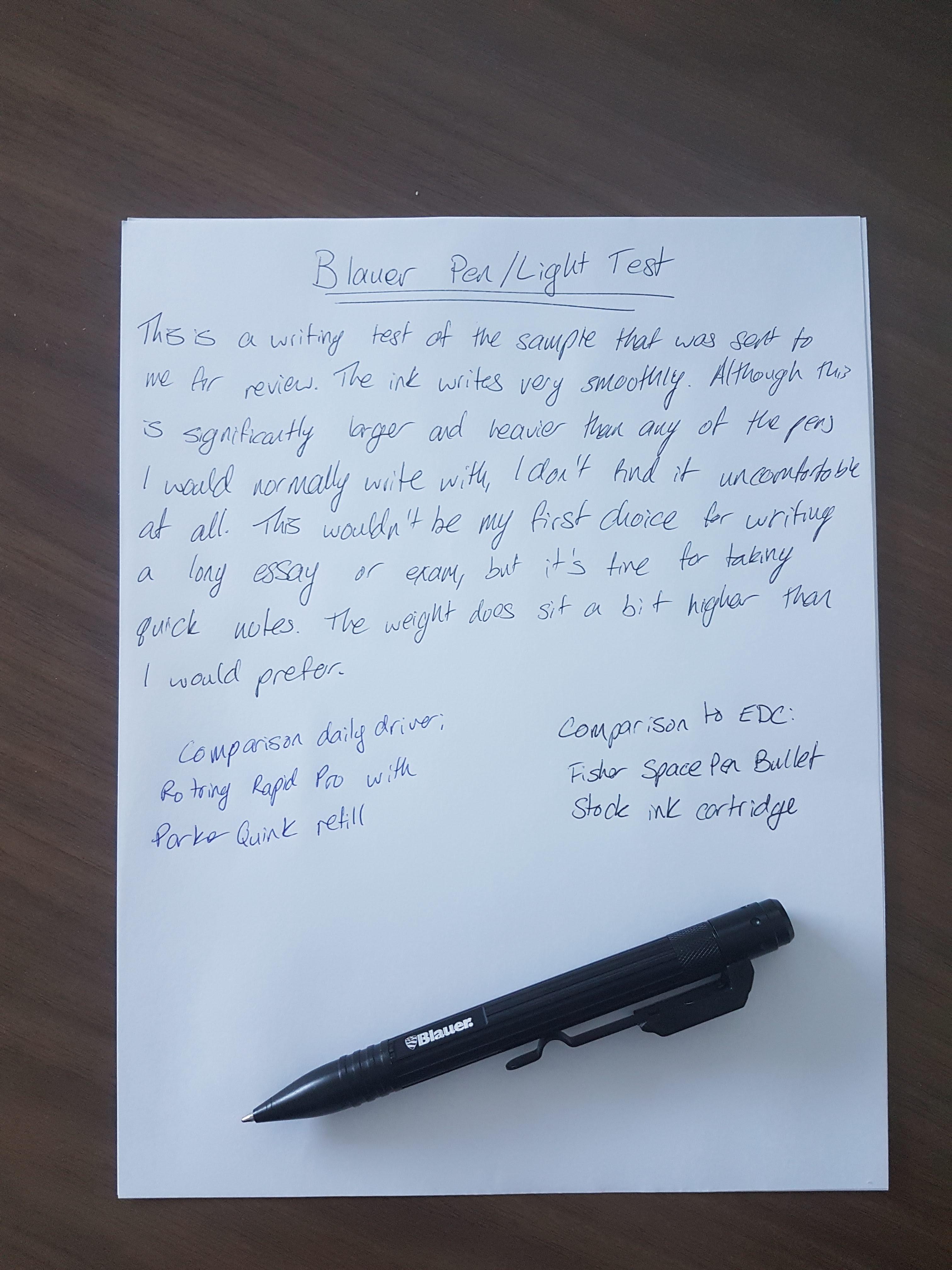 Blauer’s tactical pen flashlight is pretty good at being a pen. It could be much better at being a flashlight. If you’re in the market for a tactical pen, I suppose this flashlight will likely get a lot more use than the glass breakers or other tail ends that manufacturers seem to like sticking on the tail end of those.
I'll add that at least on Reddit, Blauer themselves were great to deal with. There's lots of room for improvement here, but I really hope they keep at it and release some more lighting products in the future.

A few people wanted to know what makes this light tick, so I ripped into it. The knurled section of the tailcap unscrews from the rest. There's some thread locker holding this all together, but i was able to get into it without too much resistance. I marred the aluminum when I did this, but it could easily be kept intact with a bit more patience. Once this is undone, you can sneak a small Phillips screwdriver past the spring to undo the two screws holding the cover on the clip.Once this is off, you can see that the cover has a diffuser sheet for the white LED, a small diffuser plug for the red LED, and half an O-ring holding the sheet in place. I'm not sure if the other half is supposed to be there or not.You can now see the LED board, with 4 wires leading back to the driver board. The driver has components on both sides.
1xAA Blauer Flashlight M22 Pen Red light