The Black Diamond Moji XP is an LED lantern that runs on 3 AA cells. The claimed output is 150 lumens. I picked this lantern up from Sail here in Canada because it was on sale for $24 and I thought it would be a decent tent light option. Black Diamond makes many products in their Moji line of lanterns and, since I can't find a product page for this one, I believe it may have been discontinued.

This light is fine I guess, but the PWM is bad enough that I would recommend against buying it.

This product is built well enough for the price. The construction is all plastic everything. This means the threads are plastic as well, but that's fine. The outside of the light has a rubberized coating that can withstand at least 20 km of being tossed around in a pack. I'm sure a big enough drop on a hard enough surface could break something, but short of that I have no issues with the materials chosen here. The light also claims 'protection against water immersion'. I wouldn't use it in a pool given the lack of O-ring, but there's no reason why this should fail in the rain. 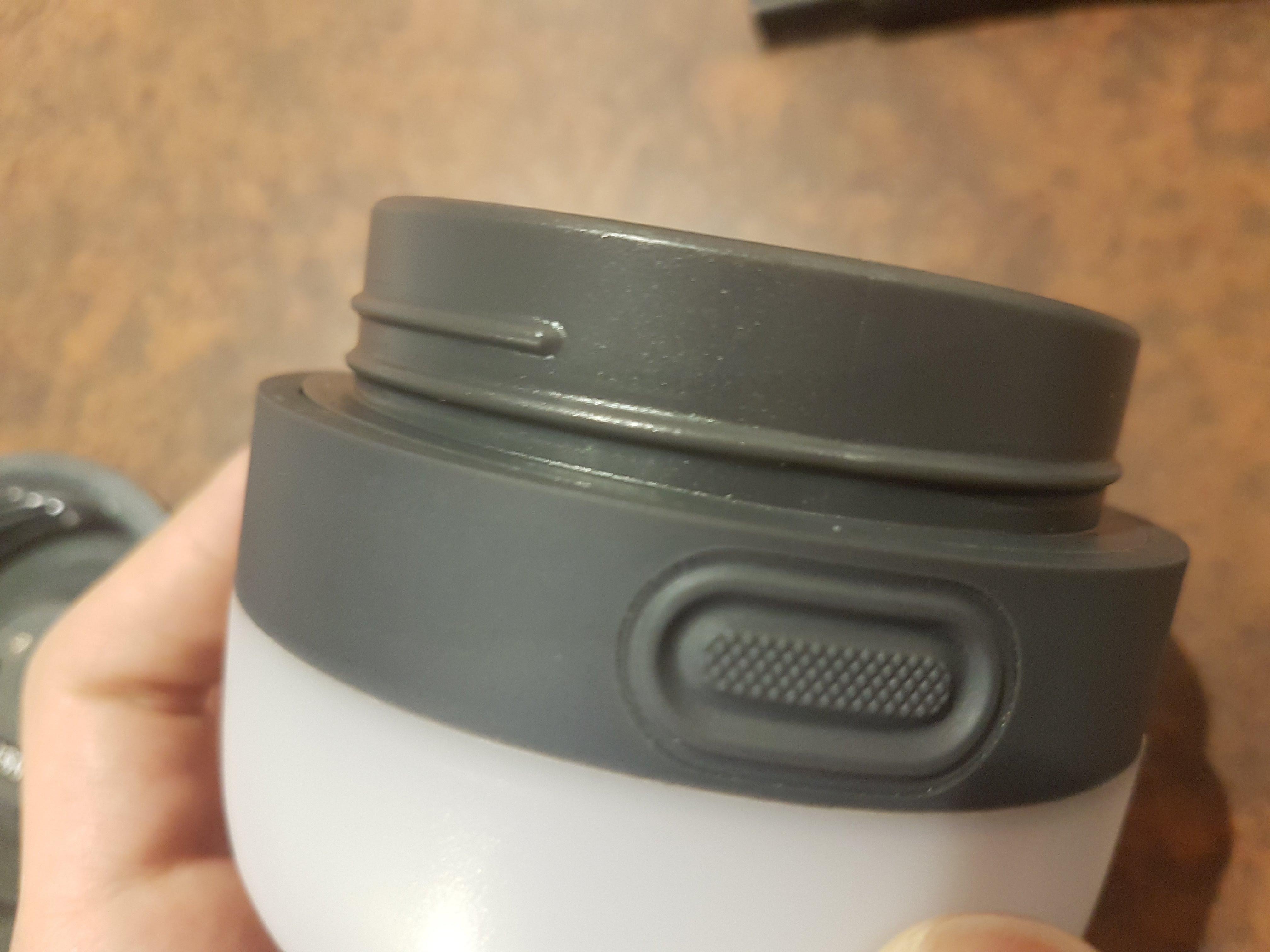 The lantern weighs 163 grams without cells, and 216 grams with the three Ikea Ladda NiMH cells I used for this review.

The lantern has two hook-like clips that fold flat into the bottom of the lantern. If one of these is extended, it works as a hanging hook. With two extended, a loop is formed. The lantern also sits flat on a table, and is very stable in this configuration. There is belt clip or place to mount one, so you can't use this as a chest mounted light as you can the XTAR Moon. There is also no magnet in the base. This isn't a big deal for camping, because most trees aren't made of steel, but it would add a bit of versatility for use around the home. 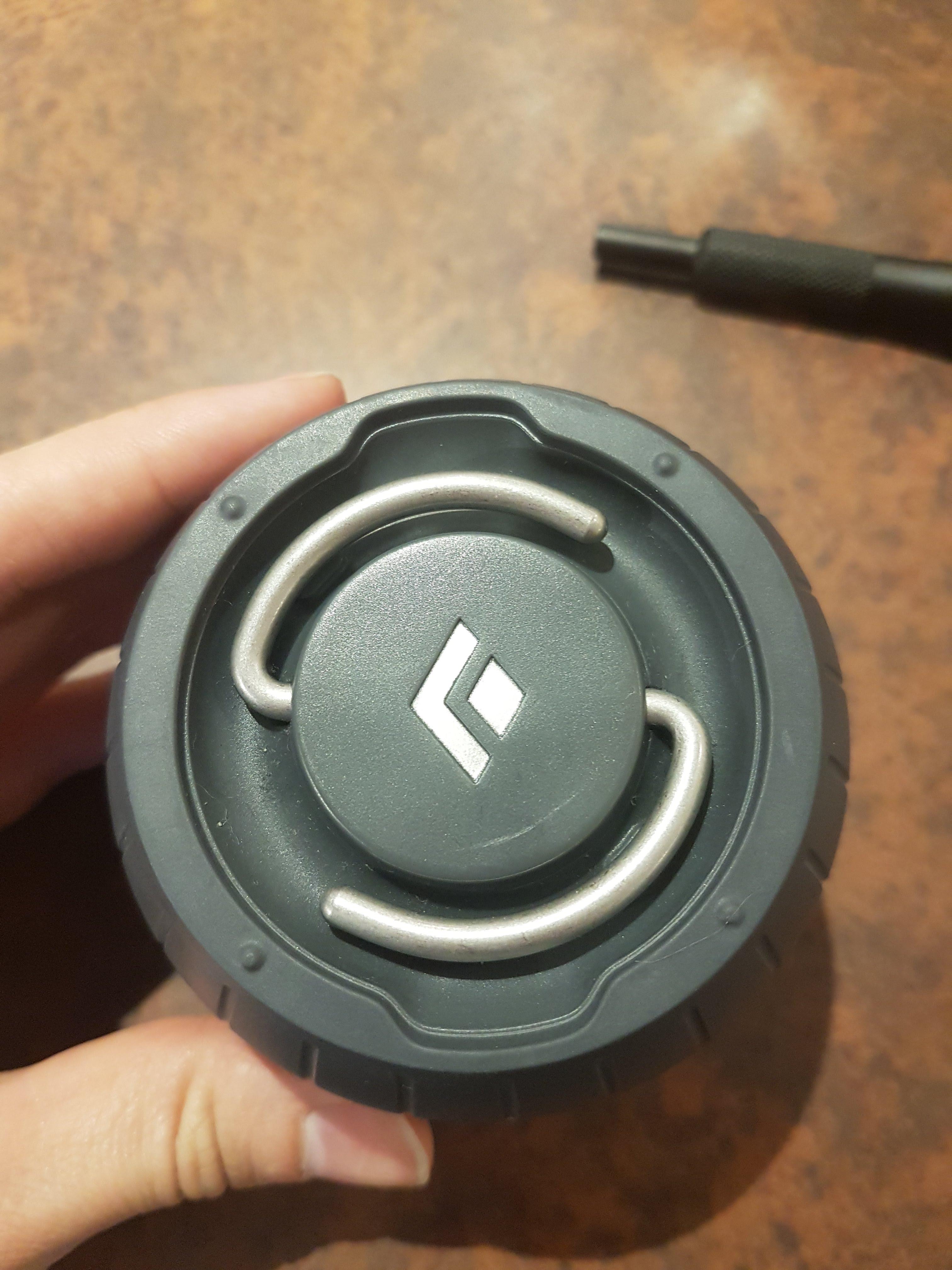 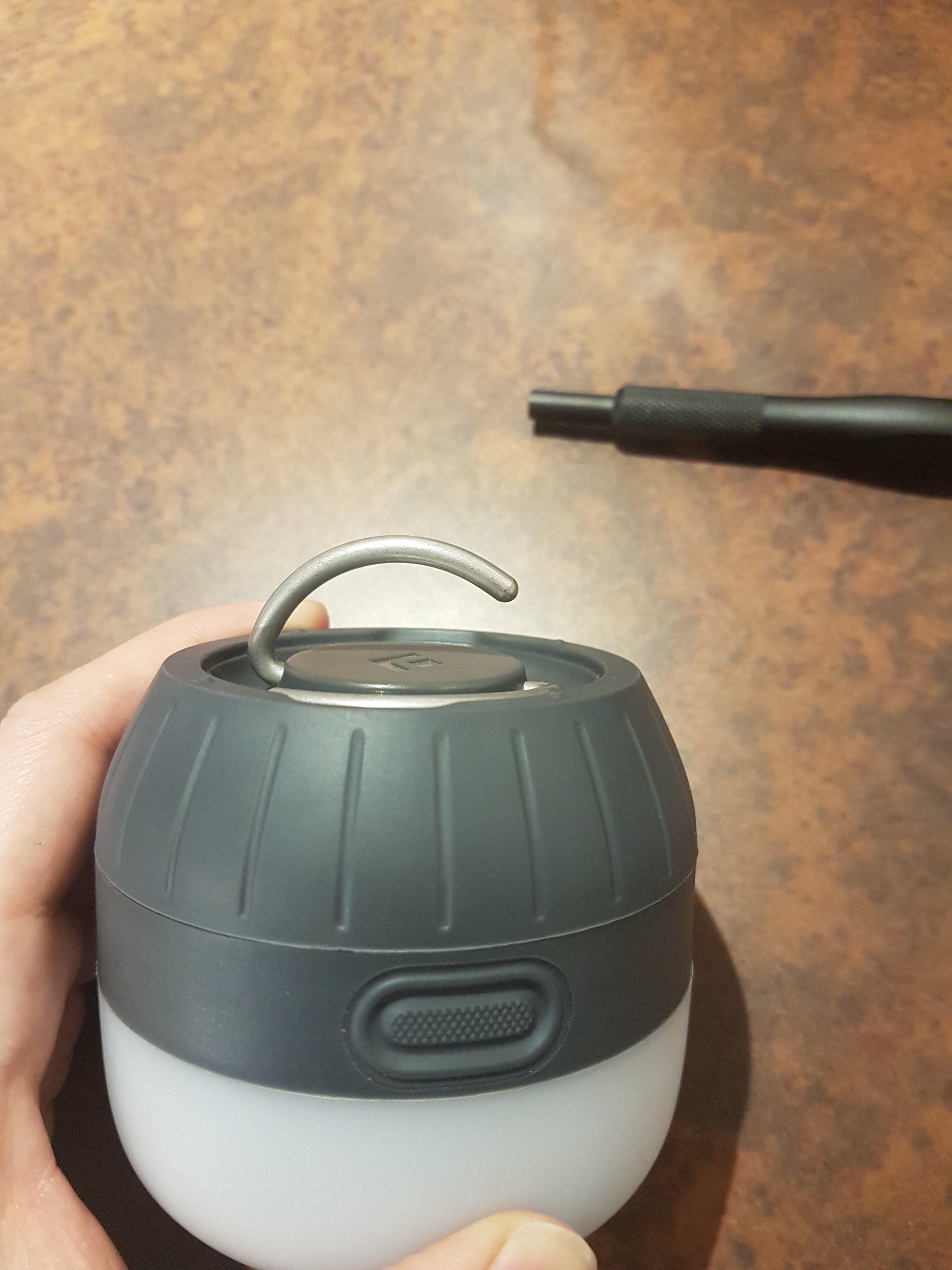 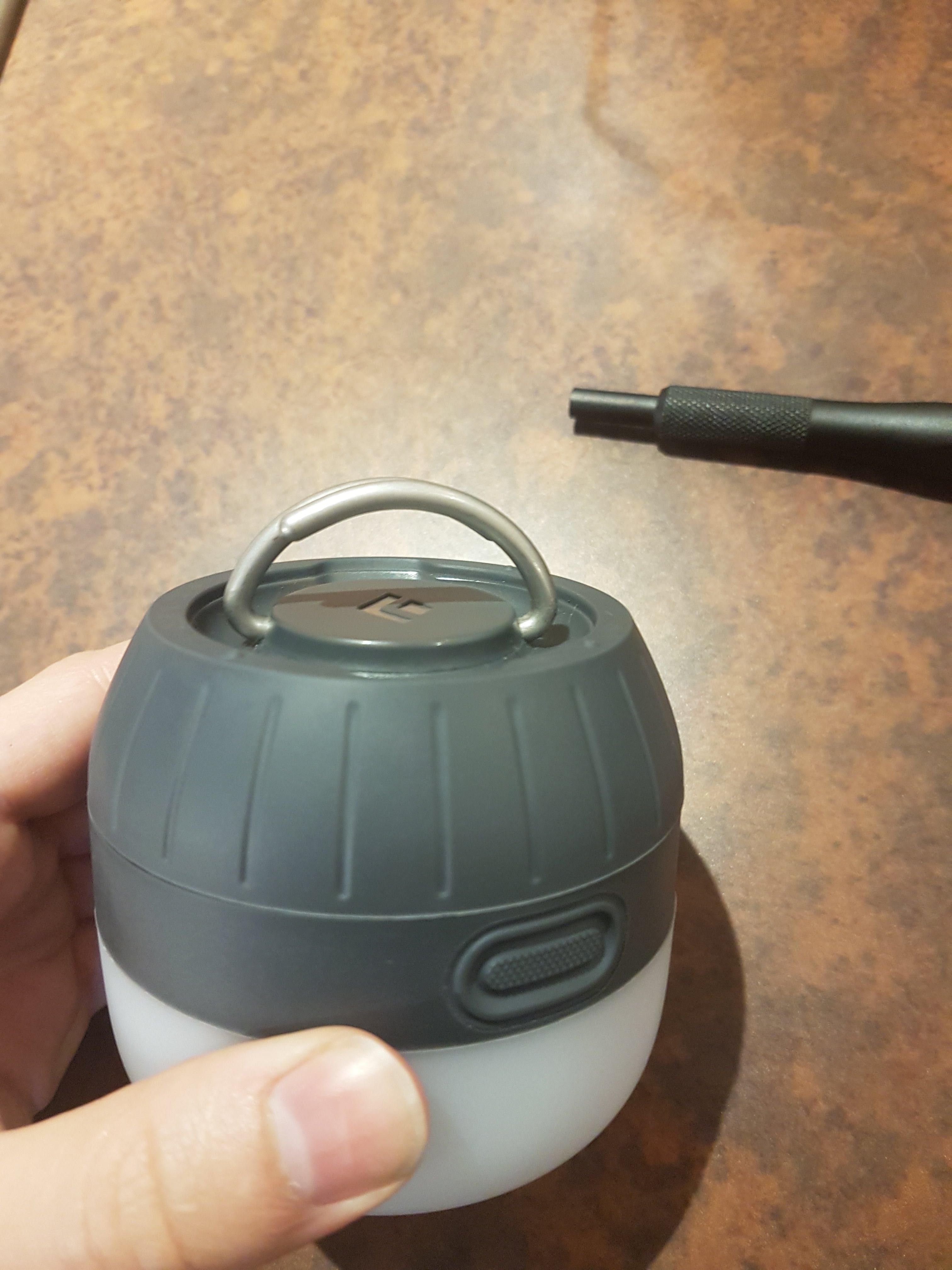 This lantern has a white light that is infinitely variable. A single tap of the button will turn the light on at the last used brightness mode. Holding the button will cause the light to dim all the way down to about 5% of the maximum brightness, then back up to full brightness. A single tap will turn the light off.
There is no lockout mode on the lantern, but I didn't find the light turning itself on in my pack throughout our hike.
There is no red or other colored mode on this light. That's not an issue for me for many reasons, but I know some people like fun colors.

This is where it gets ugly for this light. The beam is a nice neutral white, with no major artifacts or tint shift that was noticeable in use. The beam also has terrible PWM at all brightness levels, including max. For those that aren't aware, PWM is a method used to reduce brightness by switching the LED on and off quickly. If done properly, this switching happens so fast it's not noticeable. It is not done properly in this light. The PWM was so bad that, while playing cards in the tent at night, I had to make an active effort to hold my cards very still so I could read them - otherwise the effect was akin to trying to read a newspaper with a strobe light as a book lamp.
The beam pattern is fine for tent use, but I found I could have used a bit more brightness. For outdoor use, the design of the lantern means a lot of light is shot straight up at the sky and wasted if the light is sitting on a table. If you hang it from a cord somehow I'm sure it would be enough to eat from.

The light runs off of 3 AA cells. I used NiMH, and you should too, but lithium primary cells and alkaline cells should both work fine. The light does not claim support for 14500 Li-ion cells, and I would highly recommend against trying to use them. 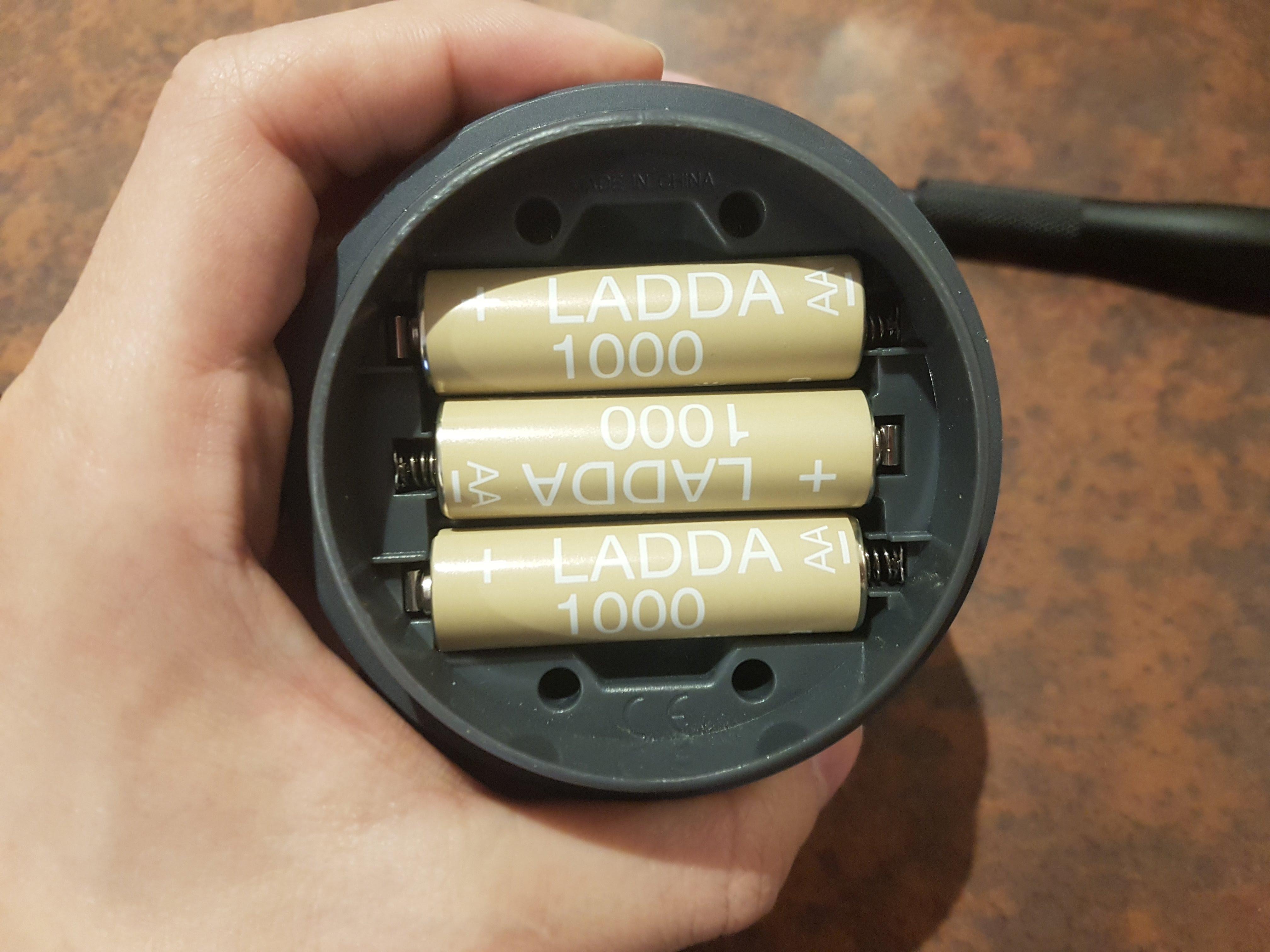 I tested the light with 1000 mAh Ikea Ladda cells, and it ran on high for well over 3 hours before dropping to less that 10% of it's original output. That's good enough, but there were a number of step downs that I don't really think are necessary in an AA light. Keep in mind that 1000 mAh cells are exceptionally low capacity, and AA cells are readily available with over twice that capacity - using these would obviously lengthen the runtime of this light.
There was no noticeable heat generated during my testing, which is good for something I want to keep on while it's sitting in a mesh gear hammock in the top of a tent I'm sleeping in. 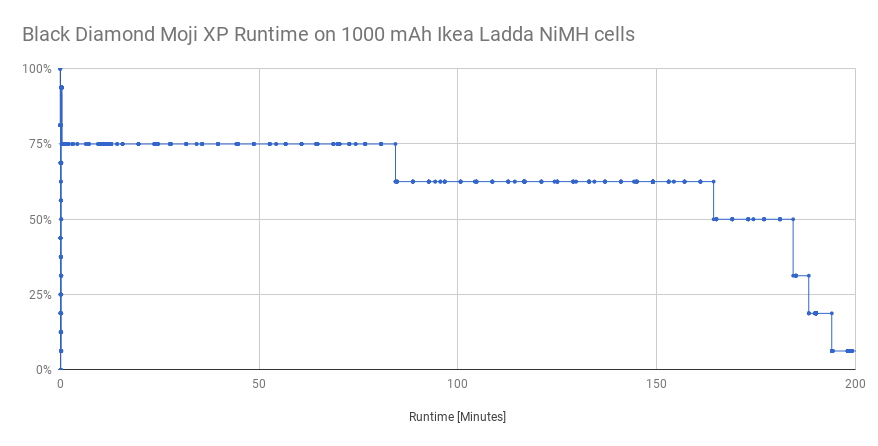 I wanted to see what makes this light tick (and tick me off, with the PWM...) so I opened it up. If you choose to do this yourself, know that you are doing so at your own risk and you may void the warranty of your light.
The battery carrier comes out with the removal of 4 #1 Phillips screws. Once that's off, you can see the driver, which has the button mounted on it, with wire leads connecting it to the LED star. The LED looks to be an XP-G3, but I'm no expert at identifying LEDs. Swapping the LED would be easy enough. The driver would bot be easy to swap, since it's a major structural component of the button, but it may be possible to use it as a slave board and piggyback a driver that doesn't cause terrible PWM. I may try this modification. 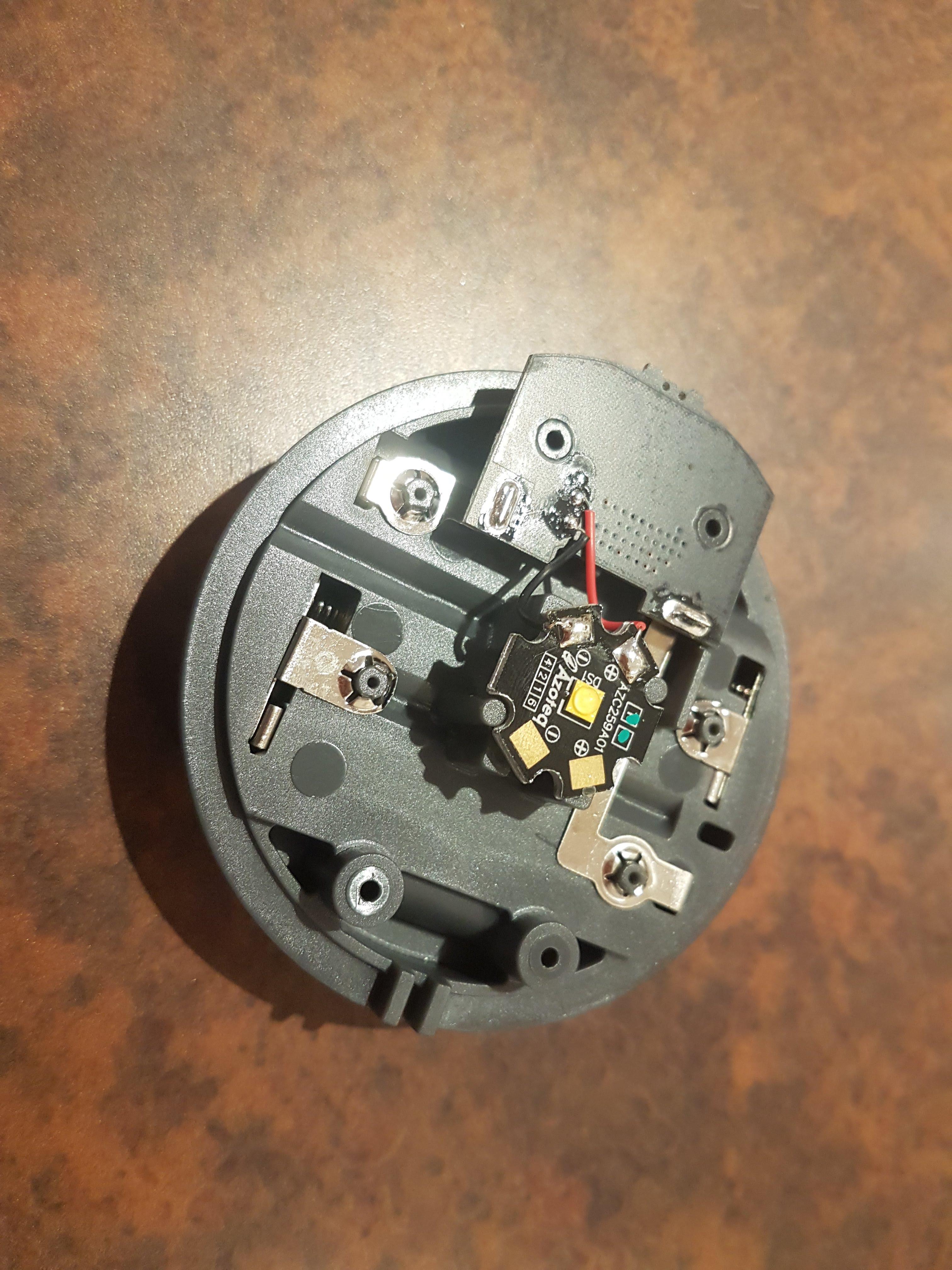 The LED is just sitting on plastic studs and is otherwise floating. With no heat sinking, it would not be recommended to try and push too much current through the emitter.

If you have any questions, let me know and I'll do my best to answer them!
3xAAA Black Diamond Cree XP-G3 Lantern